A year ago today we said our goodbyes. His physical presence may be gone, but his spirit will never be forgotten. I look out at our herd of of beautiful Alpine/Nubian goats, currently 14 strong with three more does due before summer, and I think, “Cuzco, look what you started!”

Little did we know that this cute little “goat of many colors,” purchased for $25 from a small farm in western New York state as a companion for a new colt, would be the snowball that started our avalanche into the world of working goats, dairy goats, and goat breeding. Cuzco has probably been the most prominent thread in the tapestry of me and Phil’s married life. He came on the scene during a celebratory third anniversary trip and stayed with us for fifteen years, shaping many of our life choices and activities, and creating dozens of unforgettable stories. 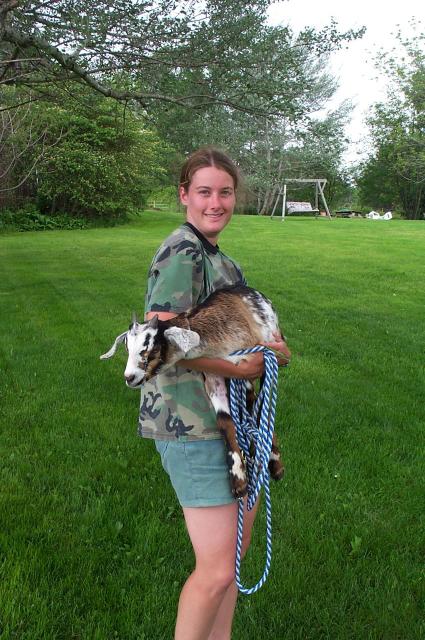 Cuzco attended my graduation from Houghton College in 2003. He was elected Homecoming King in a landslide election at that venerable institution in fall 2002, much to the dismay of the Homecoming Committee who tossed out his votes with prejudice. 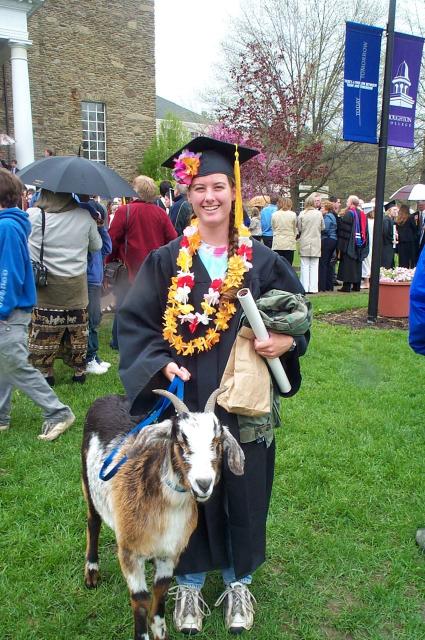 We moved to Lake City, CO in October 2003 and the whole family chipped in to buy Phil a goat cart for Christmas. We trained Cuzco to pull it and I drove him in the 4th of July parade in 2004 when he was a gangly 2-year-old. 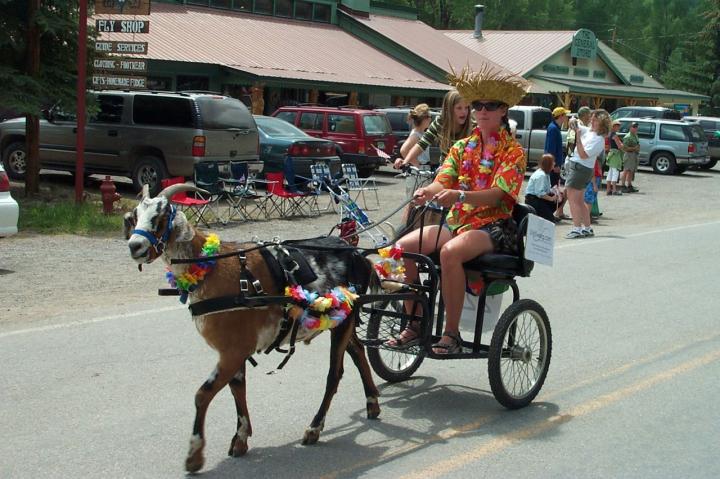 In 2005 a friend’s dog chased Cuzco off a 30-foot cliff where he landed on the highway below and destroyed one of his horns. It was too far gone to save, so the vet amputated it. We were sad at the loss of the horn, but grateful he didn’t lose his life. Little did we know at the time that the loss of that horn would set Cuzco up to be one of the most interesting and memorable goats people would ever meet. The missing horn became the topic of nearly every conversation when people first met Cuzco, and he became known wherever he went as “the one-horned goat.” In 2007 we moved to Colorado City, CO and Cuzco lived in our backyard since my horse boarding situation was not suitable for boarding a goat. After an adjustment period, Cuzco came to love his suburban life with the daily walks and regular interaction with people. The neighbors all loved him, but one local kept hounding the zoning board about our pet goat, prompting them to send us threatening letters from time to time. He was the topic of several town meetings, so a petition for Cuzco to stay was signed by everyone in our neighborhood.

In 2011, Phil and I purchased 40 acres in Rye, CO and Cuzco was able to roam free with my horses again. Unfortunately, he spent too much time picking fights with them and losing, so he was not very happy about leaving his sheltered neighborhood with its safe, cozy little yard. He ended up claiming our wraparound deck as his home and would sleep on our doormats at either the front or back door, depending on whether he wanted sunshine or shade. He became our home’s “guard goat” and would challenge strangers at the front steps by standing up as tall as he could with his chest puffed out, menacing them with his hackles raised and horn cocked. 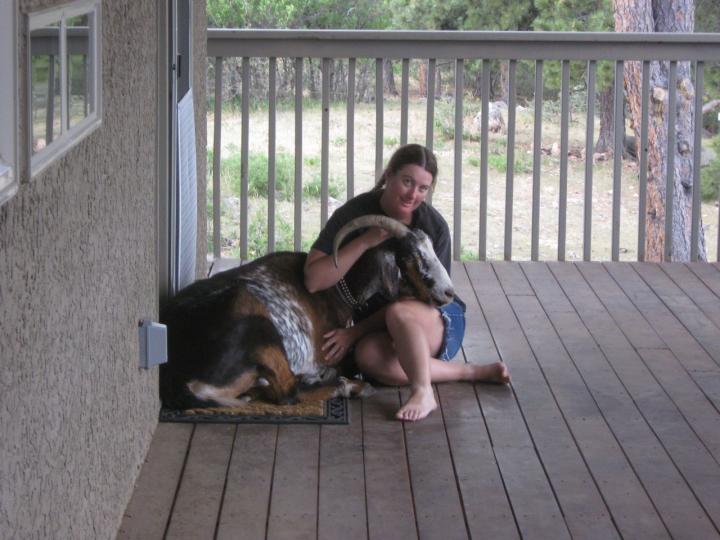 Cuzco was attacked by coyotes during the night in June 2012 and I spent two frantic days searching everywhere for him, even if just to find his carcass to have closure. At the end of the second day I found him hiding behind a chain link fence at a house three miles from ours. He was bruised, battered, bitten, and had sustained permanent lung damage from his frantic run. But he was very much alive, and a short time later he hiked with us to the top of Greenhorn Peak. 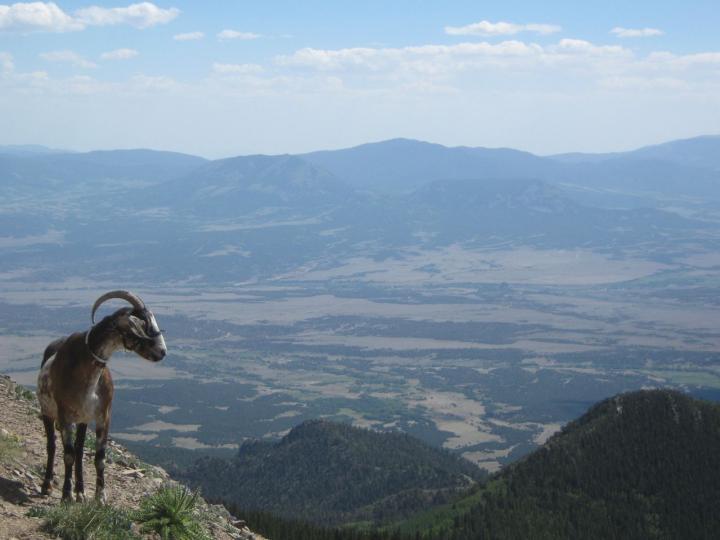 Cuzco accompanied us to our first NAPgA Rendezvous at Whitney Reservoir, UT in 2013. He amazed everyone (including Phil and I!) by following us straight into the freezing cold water when we went swimming. 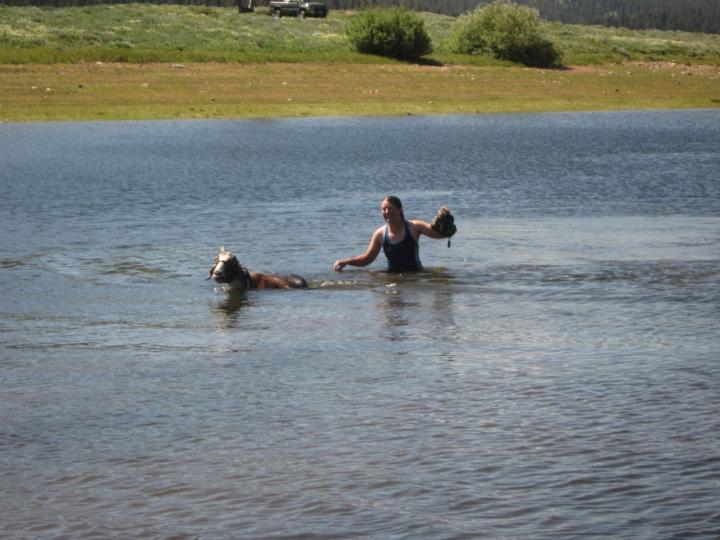 In 2015, Cuzco came with us to the Rendy in Island Park, UT. He was 13 years old that year, and despite having spent the previous two days riding in a horse trailer, he carried a 35 lb. pack containing a chainsaw and gasoline on a fairly difficult hike for our work project. Not only did he keep up with everyone while carrying the pack, he spent half the hike dragging one of my yearling goats that was tied to his saddle because the youngster refused to walk willingly after our herd got scattered along the trail. 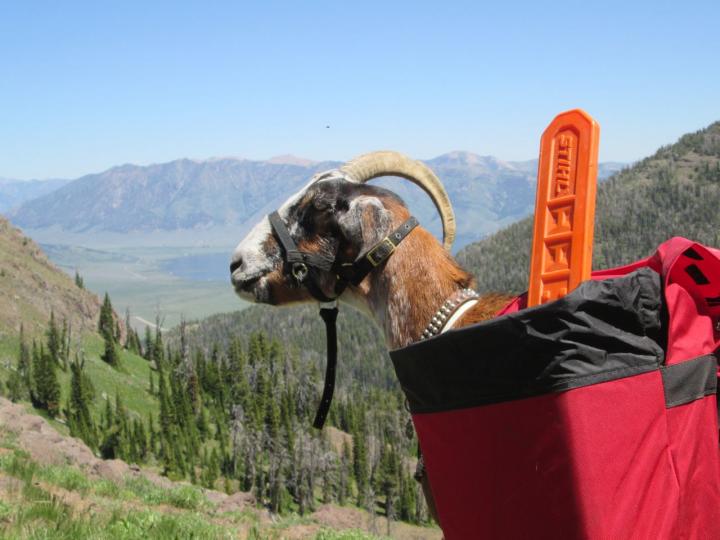 Cuzco retired in 2016 and spent most of his time puttering around the yard and basking in sunny hollows in our pasture. He had a hard time keeping weight that last year and arthritis had finally caught up to him. But even though he was starting to look raggedy, he still had a strong bearing and presence, and he ruled our herd right up to the end. He continued to enjoy his daily walks, and the first day he didn’t come was the indication that he was ready to say goodbye. Cuzco lived a long, full, adventuresome life and I’m thankful we had so many wonderful years with him. He’s the inspiration behind all those happy young goats cavorting in my pasture now, and even though Cuzco was never a breeding goat, his spirit lives on in all of them. 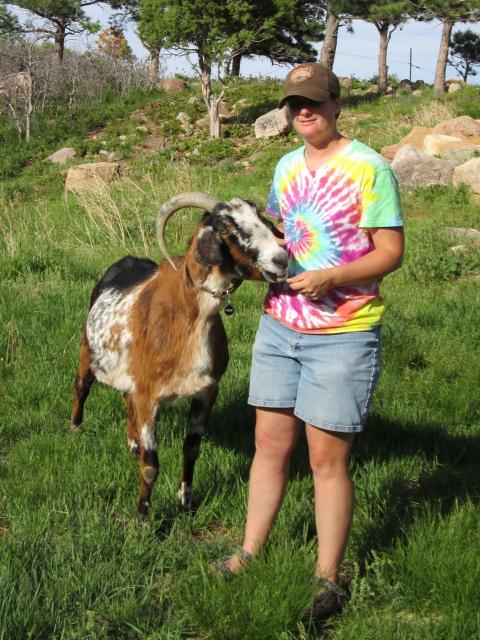 3 thoughts on “A Tribute”