Penny and Rita are really getting active, and Jezebel is starting to take them around with her to graze with the other goats. For most of the the first week she hung around the house with them. But now they’re bouncing and running, and I’m guessing they’ll be accompanying us on our daily walks in the next day or two.

I took these photos yesterday while they were discovering the joys of bouncing on rocks. Jezebel’s kids always take a little longer to start doing fun things because she’s so over-protective. But eventually she can’t keep them under control any more! 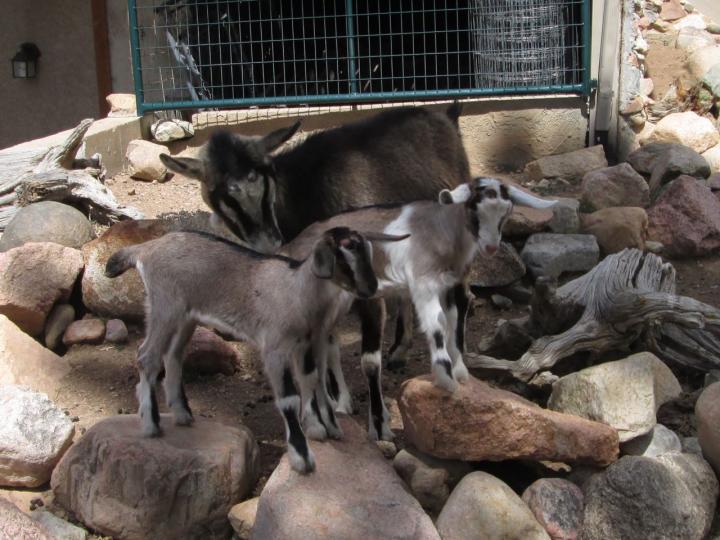 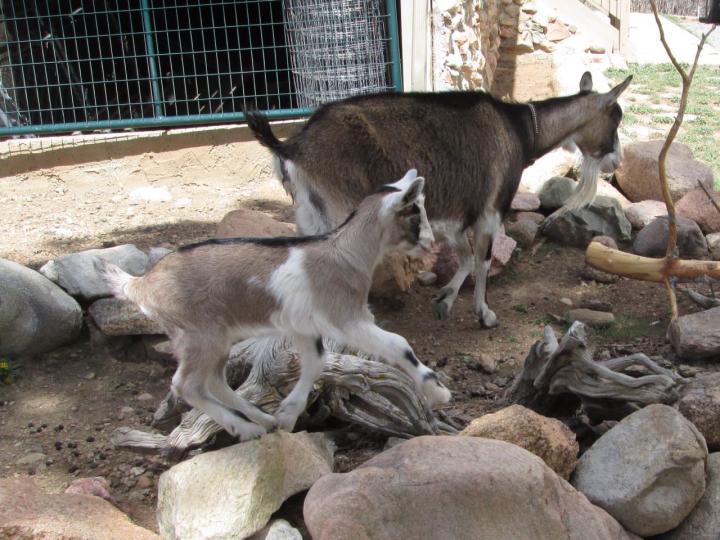 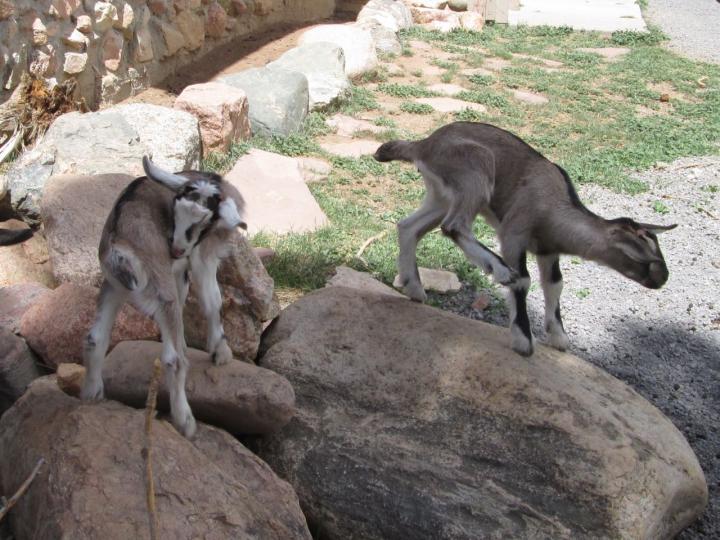 Rita meets TinCup (who is rather difficult to see because of her color). 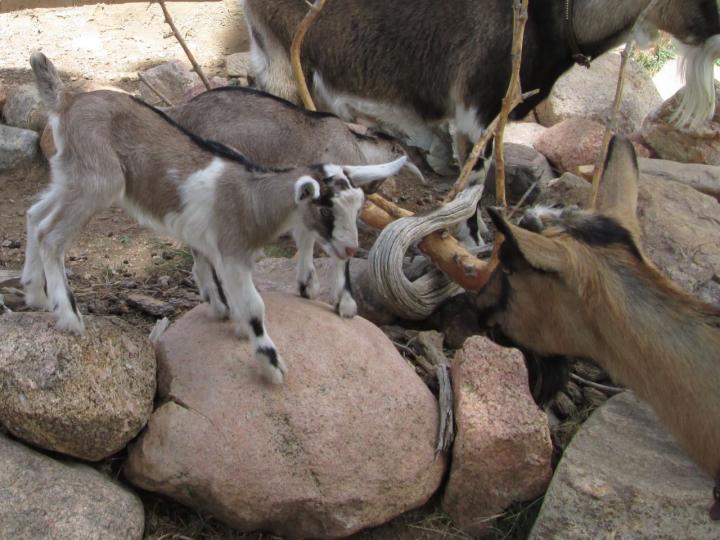 And she meets Tigerlily (Jezebel’s first kid, so a half-sister to these two). Tigerlily rudely has her hackles up! 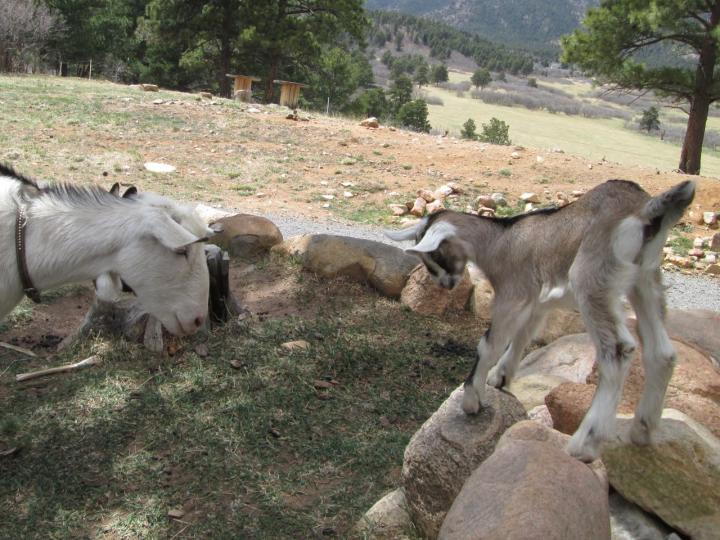 Tigerlily isn’t the only one who knows how to be rude! 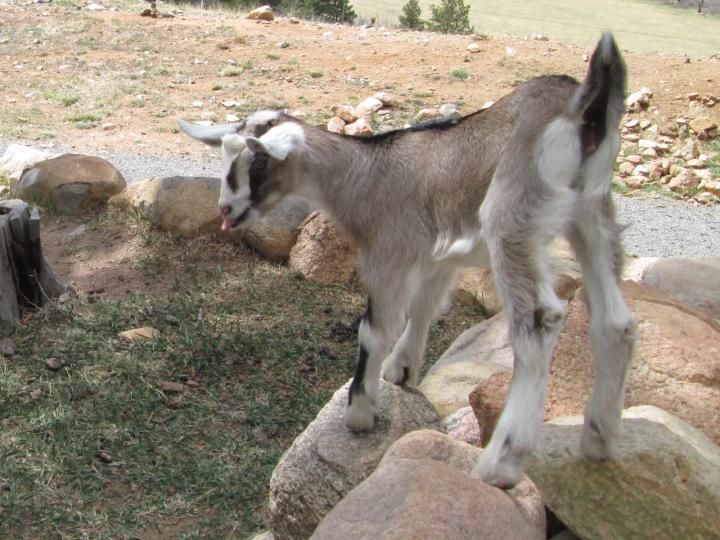 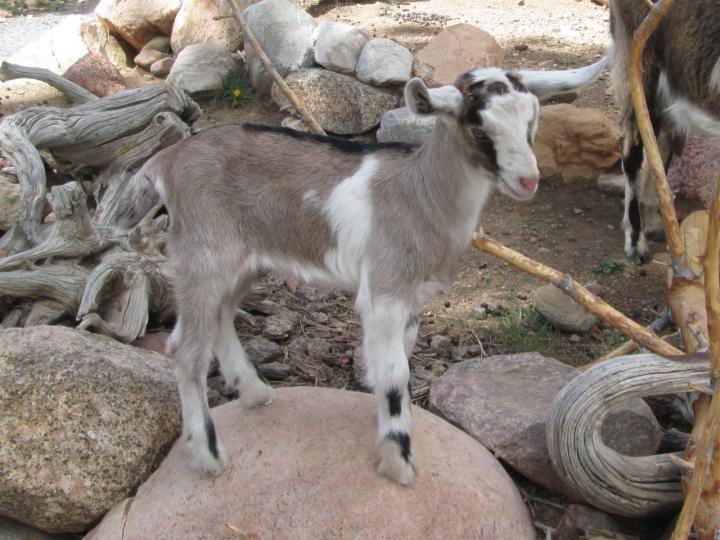 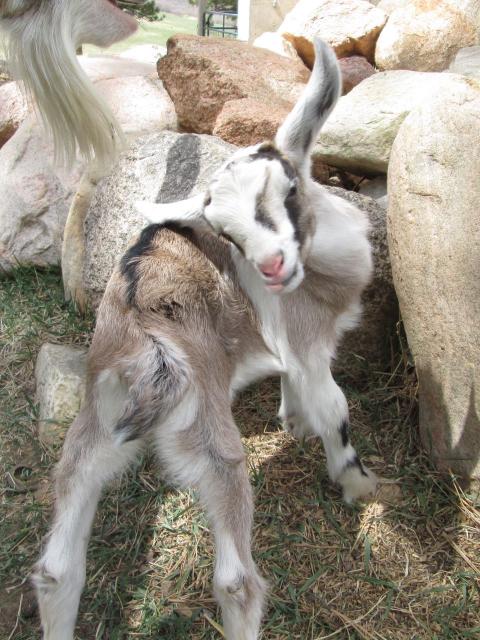 I discovered this morning that Penny is the more adventuresome of the two kids. I have a pile of shredded tarp on the back patio that is part of a horse obstacle I’m building. It was blowing around like crazy this morning in the terrible wind storm we had. All the goats were pretty suspicious of it, but Penny was very curious and kept approaching it with wide, nervous eyes. She would run away when it would flap at her, but she couldn’t resist going straight back to investigate again.

How did I get into this predicament? 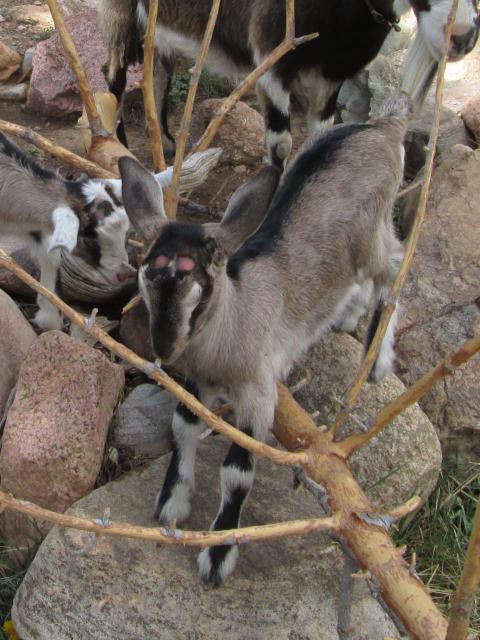 Penny’s poor little head is raw right now from disbudding last week. She reacted more than most, but even though it has stayed red for a long time it doesn’t seem to hurt her at all. I think it bothers me more than it bothers her. This little one is as soft as a rabbit. She’s incredibly fun to cuddle, and she’s starting to jump up on my knees and ask to be picked up now. 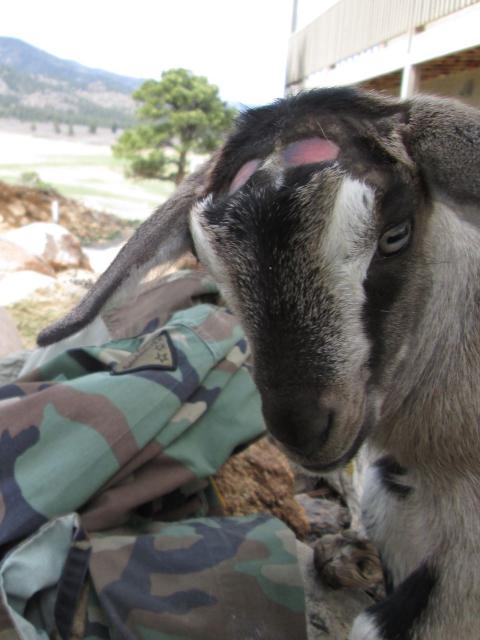 It was warm out so I removed my barn jacket and laid it over a rock. Penny was immediately drawn to it. She started pawing at it, discovered it was a cozy thing to lay down on, and promptly turned it into a nest for herself. 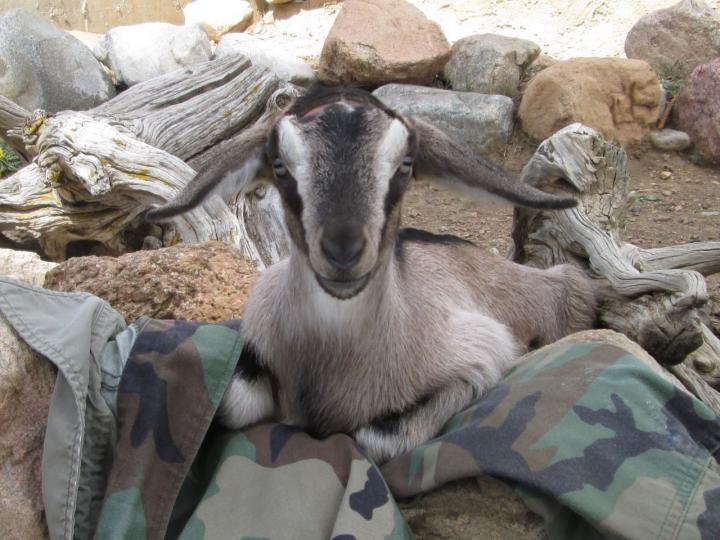 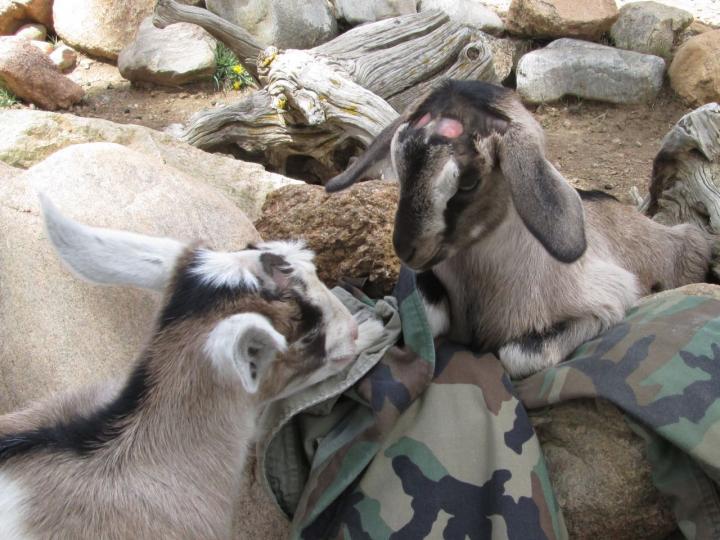 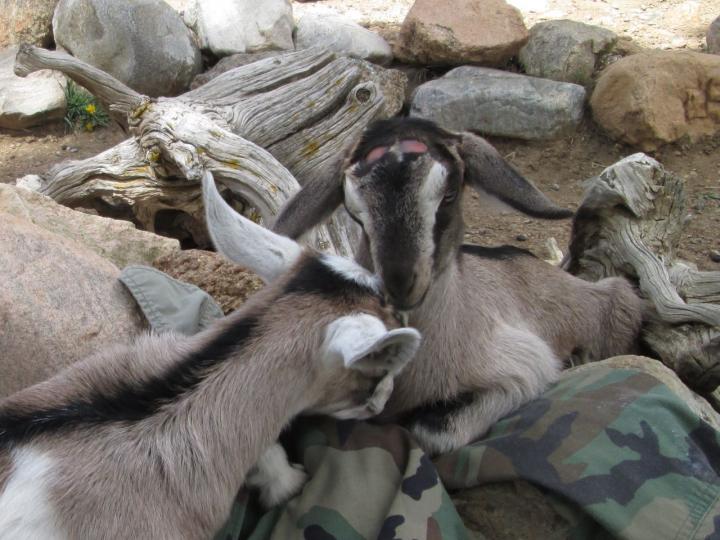 In other news, Nauti and TinCup are showing, and we’ve regularly felt babies kicking! Nauti is due May 6th and TinCup on May 16th. 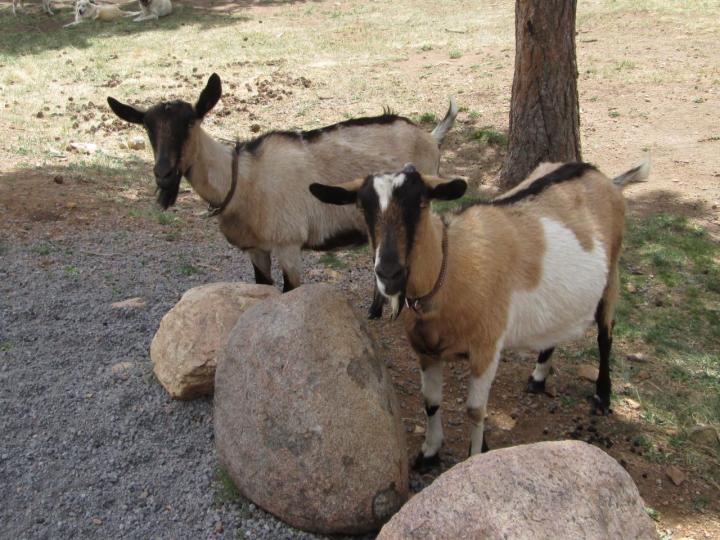 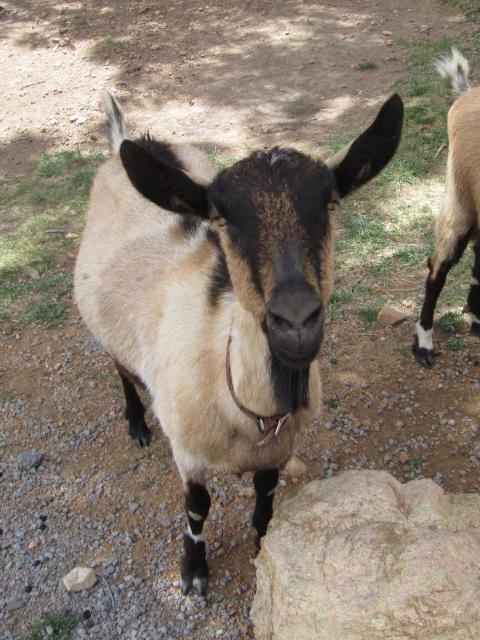 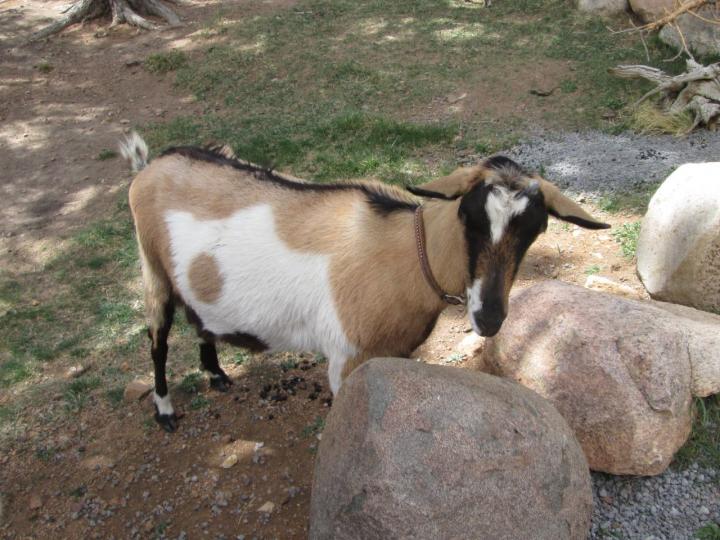