It was a beautiful sunny day and I wanted to build on my great time driving Finn yesterday, so Phil and I took Finn, Sputnik, and the sled to a quiet sloped street with good snowpack. We would lead the goats up the hill pulling the empty sled and then have them pull us down the slope. They’re not big enough or old enough to pull a big load, but we want to get them used to pulling some weight and to the driving commands while they’re still young. The hill was not steep, but it was enough that Phil and I had to scrape our boots along the ground to prevent the sled from overtaking the goats, which is why you’ll see our feet dragging in most of the photos.

I started with Sputnik. He’s a flighty little goat and put up a lot more fuss today than Finn did yesterday. I spent quite a lot of time untwisting him since he would sometimes turn suddenly around to face me–a problem you have when your vehicle has no shafts. Even so, he did really well for the most part and exceeded my rather low expectations. 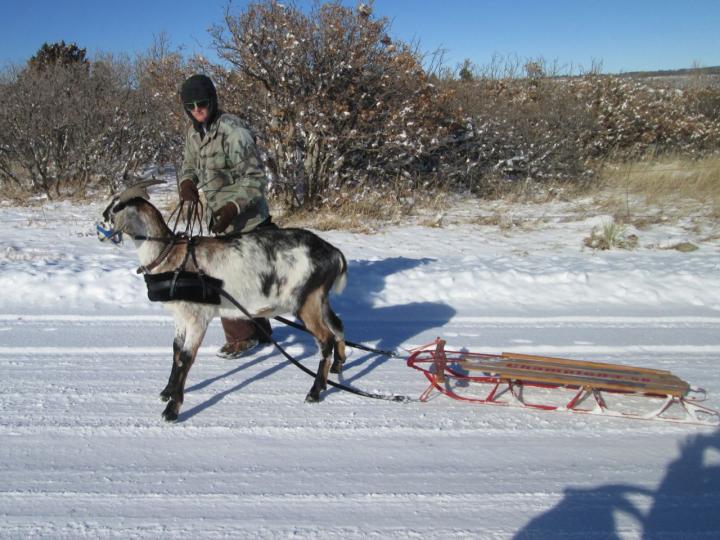 With Phil there to help when he got tangled and Finn to lend moral support he did alright. 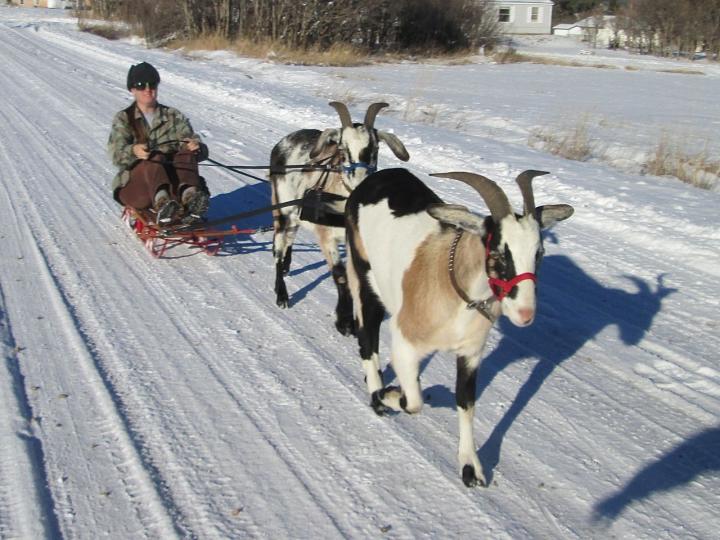 Sputnik is extremely sensitive to being touched with the whip, so I had almost no trouble getting him to go. The problem is that he’s also extremely irritable about the reins and kept swinging his head down quite violently any time I tried to steer, stop, or even slow down a teensy bit. Then he would get upset by the action of the reins caused by his own dramatic movements and would swing even more. This is one goat who would probably do well in a check rein since it would prevent his being able to whip his head around to the point of upsetting himself. 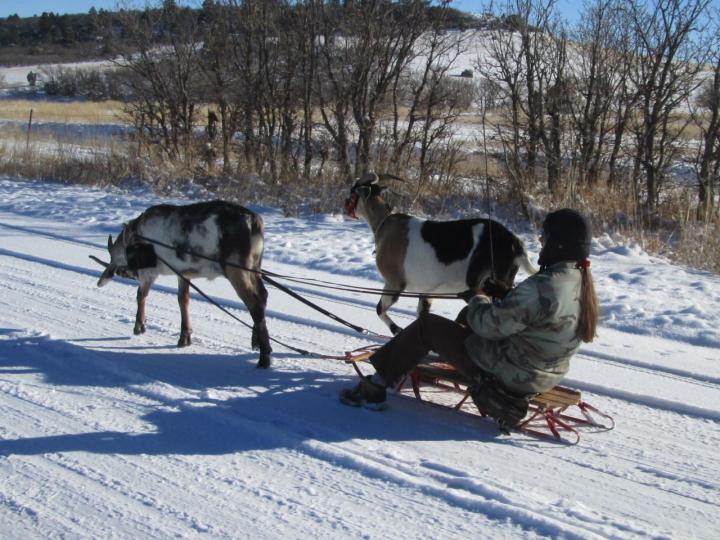 Finn did amazingly well to the point you’d think he’d been driving his whole life. He already knows “Walk on” and “Whoa” after his one lesson yesterday! 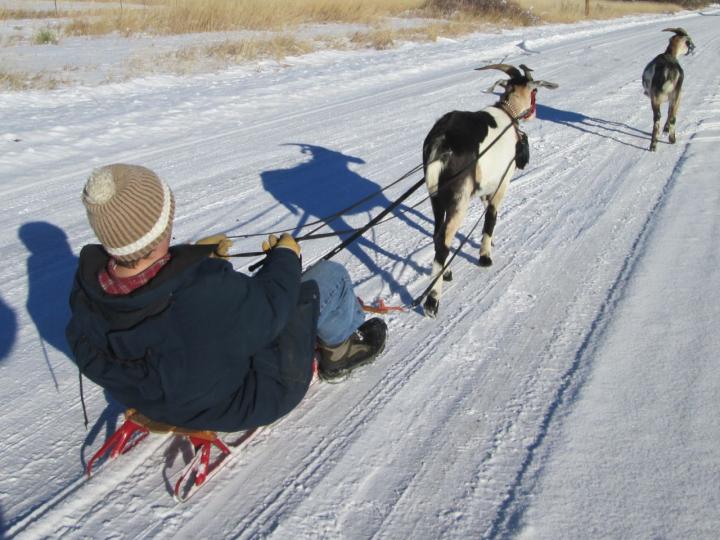 We have a tandem hitch! Not really, but it sure looked like it a lot of the time. Phil likes to call the tandem a “hot dog hitch” for some reason and it makes me laugh. 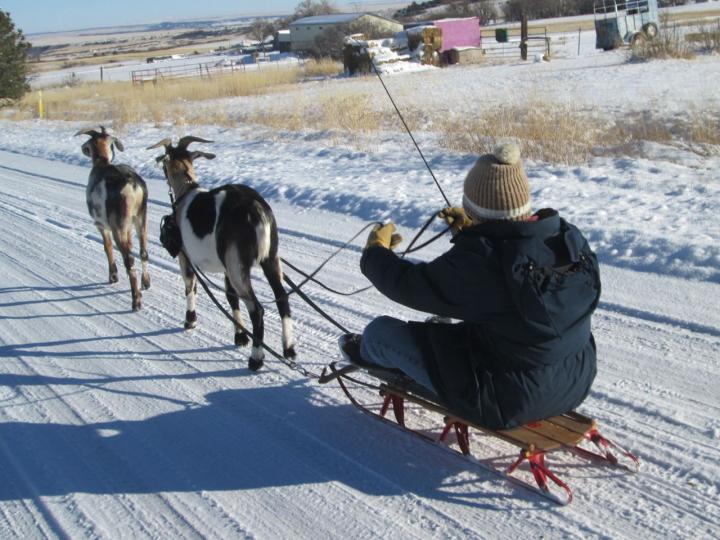 Mario Andretti coming around the corner! I think Phil wants a steering wheel on this thing. 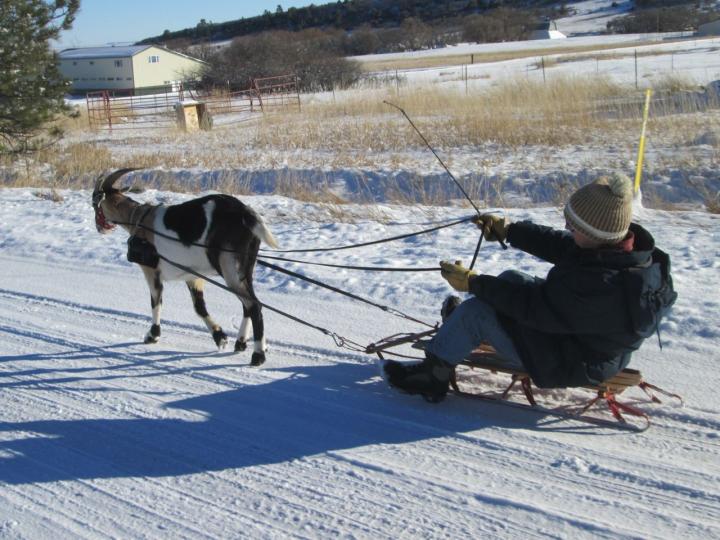 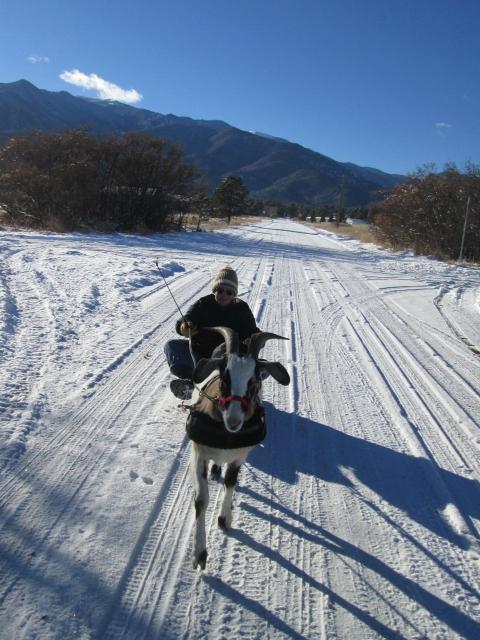 When the temperatures go down I like to haul hot water to all the critters since I don’t have electric tank heaters. It finally snowed yesterday, which makes hauling water sooooo much easier since I can load the buckets onto a sled. Well today Finn helped me! Before I had him haul water, though, I hitched him to the empty sled and took him up the road all by himself. I brought lots of cookies to make it worth his while to leave the other goats in the pen and come with me. We went up the road maybe 1/2 mile or so and when we turned around the road was downhill, so I was able to hop in the sled and drive him back to our driveway. He was a very good boy!

And since he was already hitched to the sled I decided to make him haul the water out to the troughs. He was steady and careful and didn’t spill the water even once. By the time we were done he was already beginning to know what I meant when I said “Walk On!” and “Whoa!” I hope the snow sticks around for a little while so we can keep practicing. He’s going to be a very quick learner I can tell. 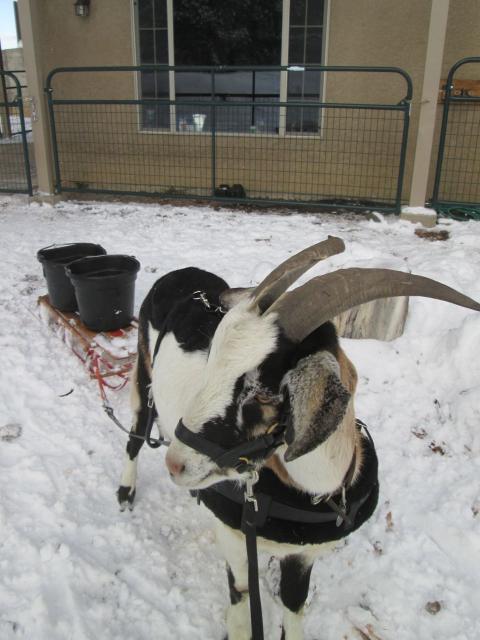 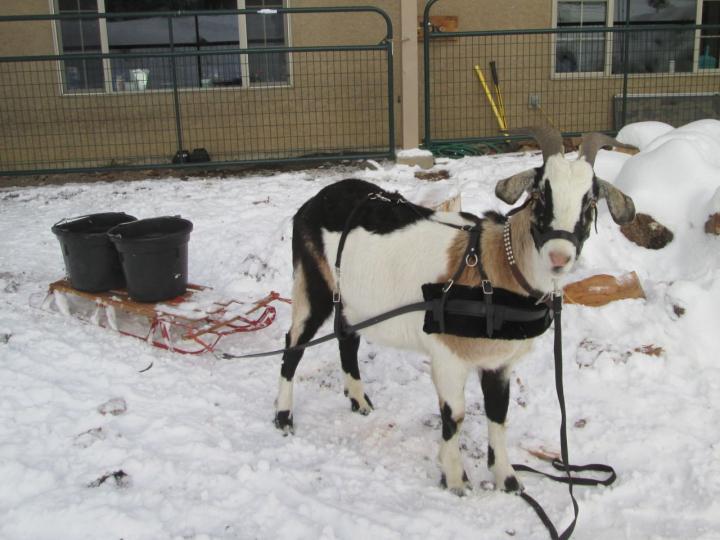 I had to get a few more photos of my new toy. As you can see, Finn easily fits even with his large and ever-expanding horns. 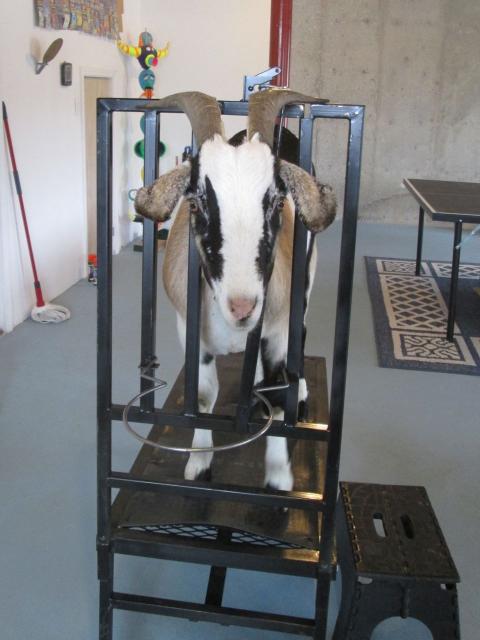 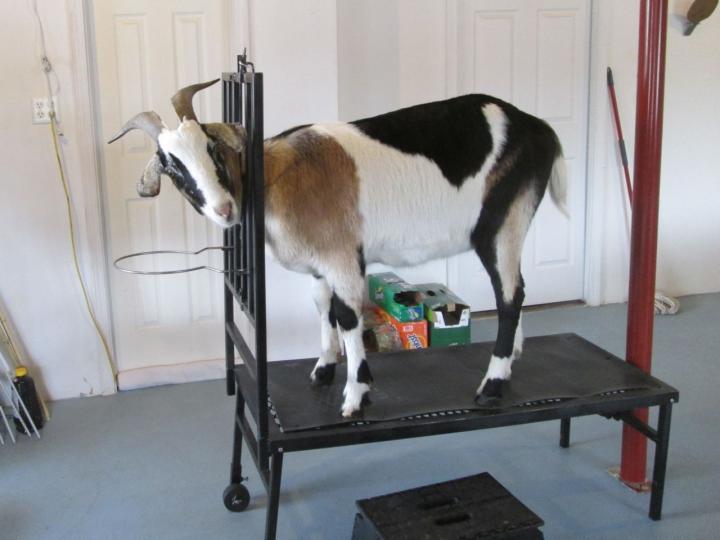 Sputnik doesn’t like the stanchion. He has hated being restrained from the moment he was born and this hasn’t really changed, but he is learning that he must tolerate it sometimes. Being an intelligent lad, he has discovered that most of the time, the benefits of cooperation outweigh the costs. “Nom-nom-nom-nom!” 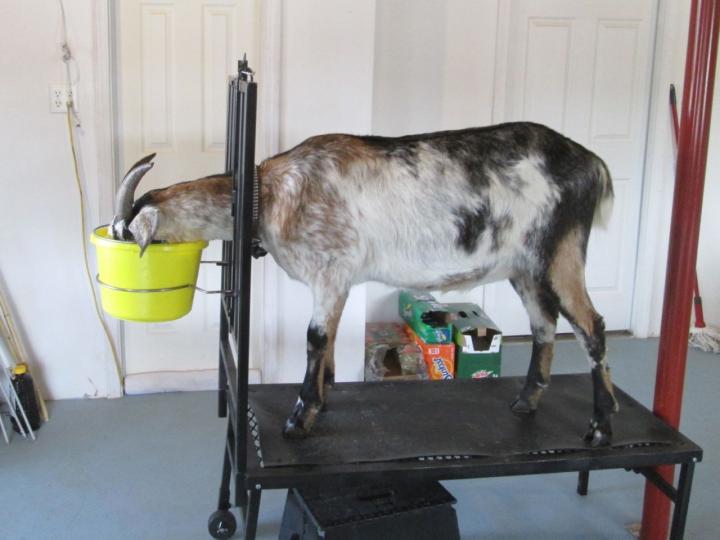 And the top opens up for the convenient release of horned beasties! 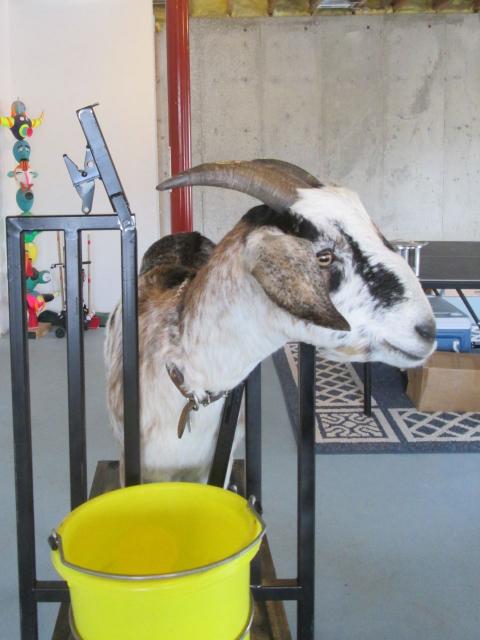 And because Sputnik is so cute… 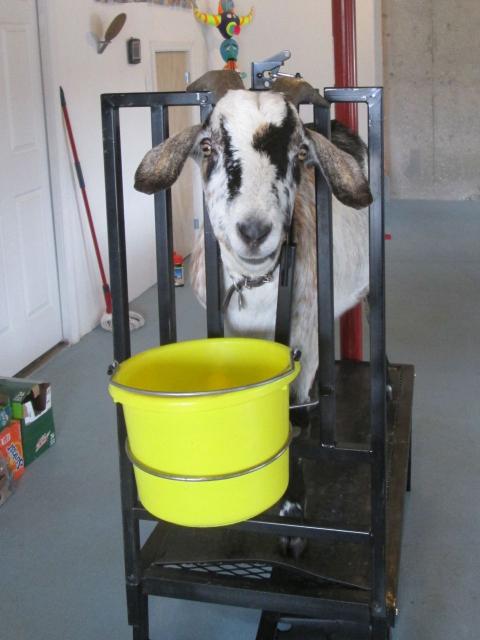 I love that this stanchion is tall enough for my milking stool to slide underneath out of the way. The increased height is also making my back and neck really happy. I can actually sit up straight while milking! Yay for fun and practical Christmas presents!

This stanchion is big enough that even Cuzco fits on it. Naturally, the first thing Cuzco did when I locked his head in was to get mad, flip the stanchion over, and drag it across the basement. It’s buckled securely to the support post behind it so no goats can flip or drag it. Of course, I don’t expect any goat but Cuzco would even try to do such a thing–it’s a very heavy stanchion and everyone but Cuzco is accustomed to being confined in one.

Even worse than coal or switches, my goats got STOCKS in their stocking this Christmas! Our girls were fast growing out of the old wooden stanchion, and not one of the boys could fit in it any more. Here is Nubbin modeling it for you… she likes it. Getting put in the stocks is a treat if there’s food involved! 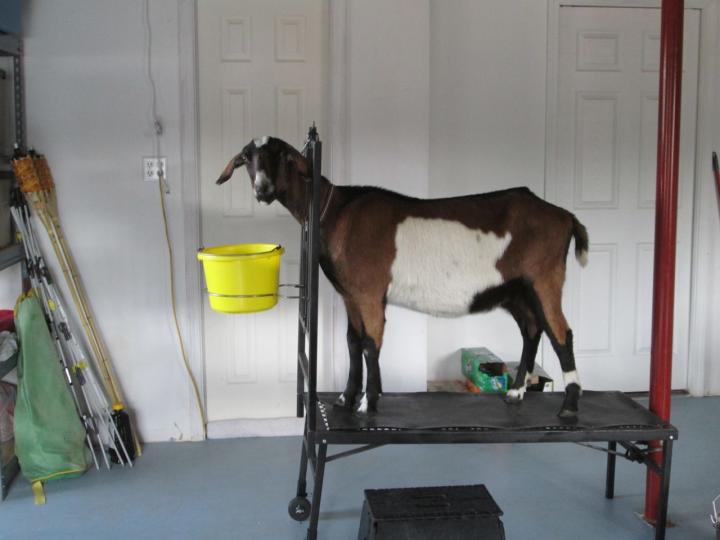 Tigerlily got a new used collar for Christmas. Every goat on our place graduates to a studded leather collar at their first Christmas. This one is an heirloom from Tigerlily’s grandmother, Lilly, who Tigerlily is partially named for. 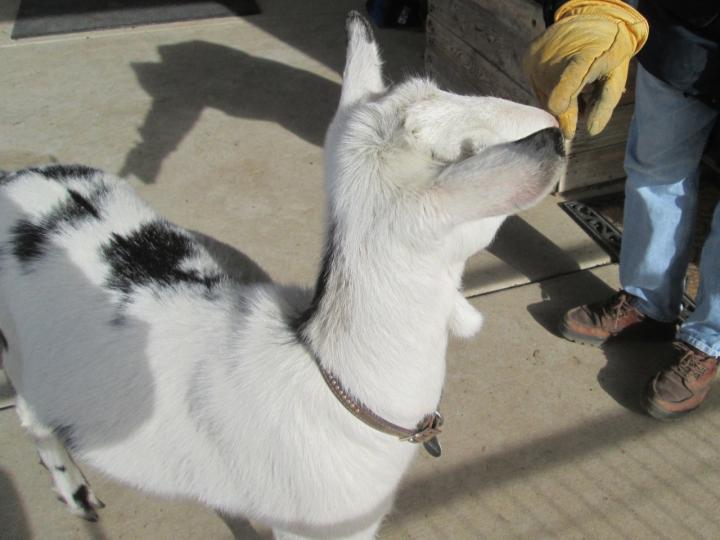 And just because she’s the cutest little angel goat ever… 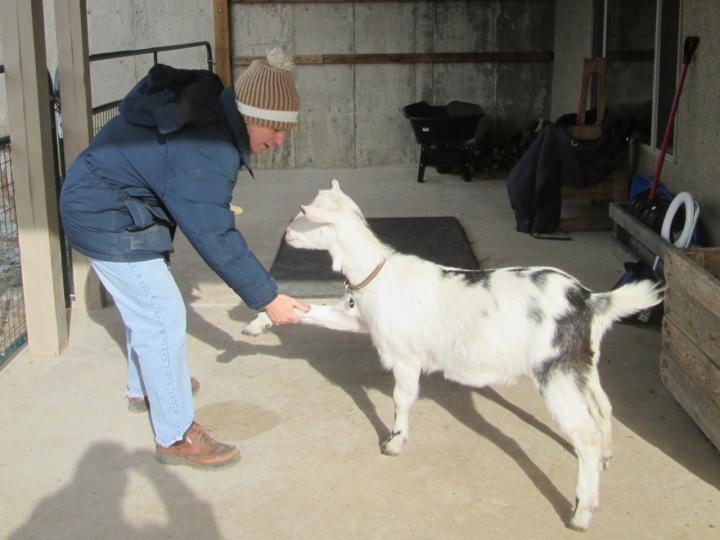 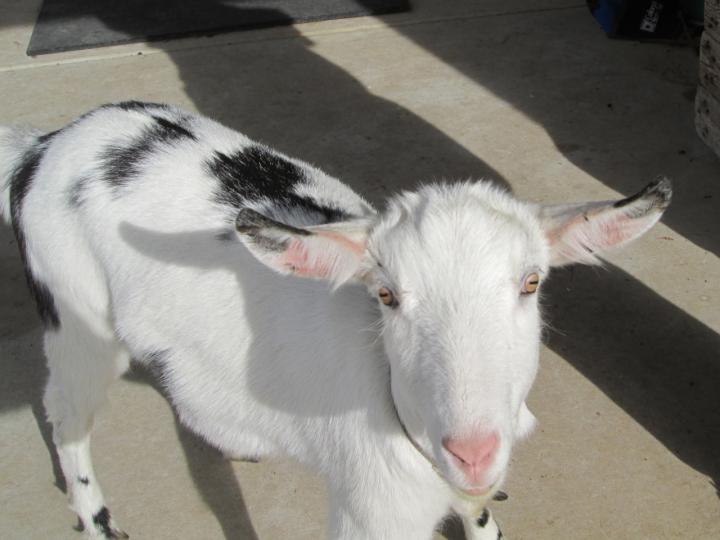 Petunia got a lock of Delilah’s hair for Christmas. She was very proud of it, but unfortunately I don’t think Delilah gave it voluntarily. Naughty Petunia! 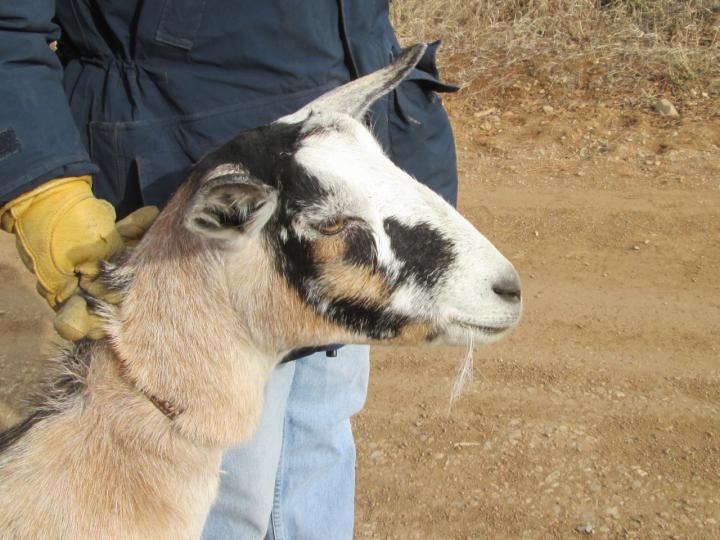