…And dropped off two adorable bundles at around 10:00 p.m.

Baby #1 is the smaller of the two but was stuck fast in the birth canal because her much larger sister was trying to cut in line. I pushed Baby #2 back an inch and this one came rushing out with no problem. Petunia was rolling around on her back when I came in to help and I’m sure if I’d given her five or ten minutes she would have straightened them out on her own, but since I was there I figured I might as well give her a hand. 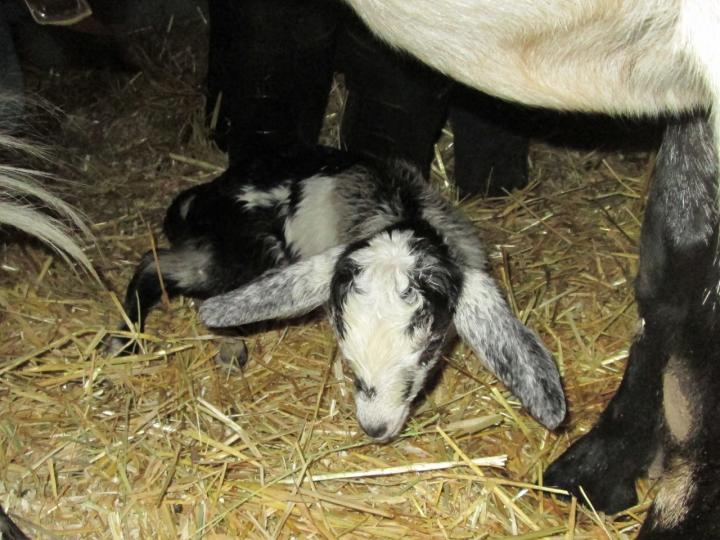 Baby #2 catapulted into the world so fast I didn’t even have time to react. One quick push from Petunia and she exploded out onto my feet. Phil hadn’t even finished toweling her off before she was up and running. The first baby was suckling first but this one was the quickest to find her legs and start toddling around. She’s quite a lot bigger and chunkier than her sister with thicker fur. Petunia is completely enamored with both. 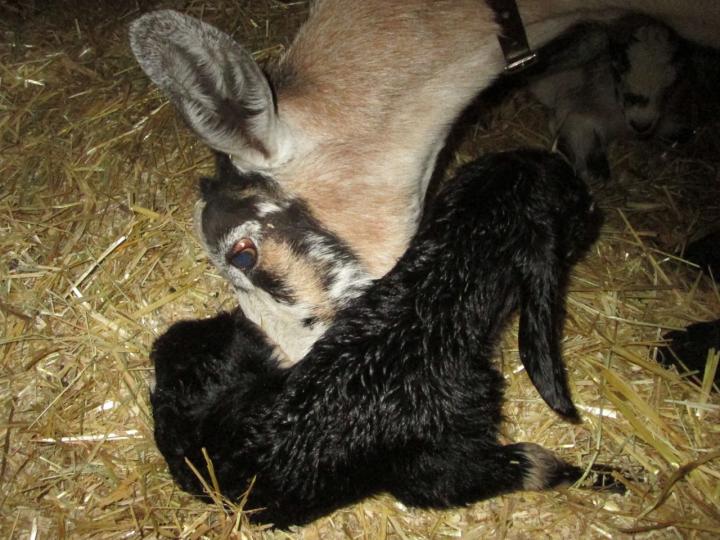 The night was clear but cold, so Phil and I stayed out with them until around midnight to make sure they were completely dry and had a good feed. I cleaned the stall and bedded it deep with straw and left warm water out for their mama. Nevertheless, I couldn’t resist going back out at 4:30 or so to make sure they were warm enough. I spent some time pressing their chilly ears between my palms to warm them up and I made sure they got another drink of milk before I went back to bed. “Blackbird singing in the dead of night” ran through my head as I held Baby #2 and I’m pretty sure the name “Blackbird” is going to stick. But what to name her wildly colored sister? How about another White Album title? With that coloring, “Helter Skelter” immediately sprang to mind with a nickname of “Skeeter”. We’ll give it a few days and see if they stick.

Today is gorgeous and we got the new kids out for some time in the sunshine. Petunia is almost as fat post-babies as she was before, so she has a nice broad, well-padded back for a new kid to sprawl out and relax on. 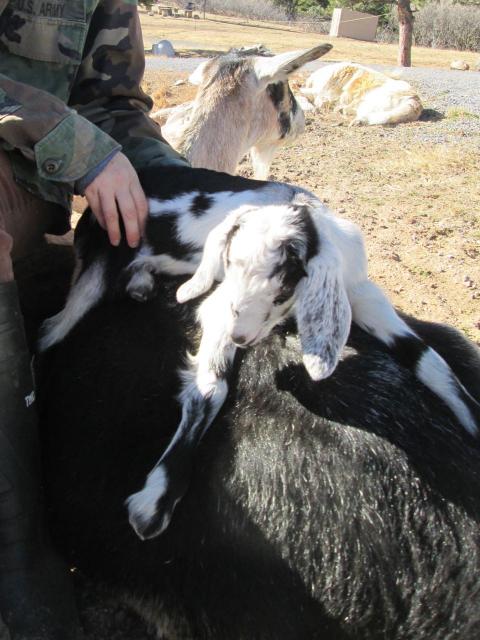 Coral was quite intrigued by the newcomers and kept sneaking up very carefully with one eye glued to Petunia. 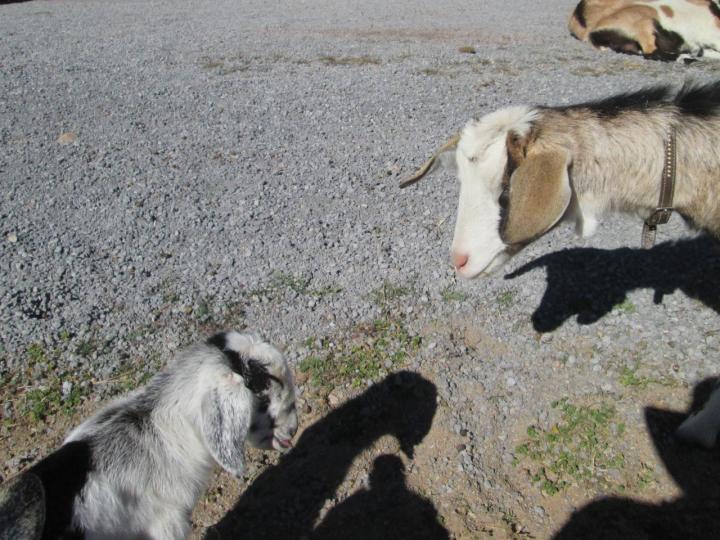 She felt safer when she could use Phil for a human shield. Protective mamas are not to be messed with! 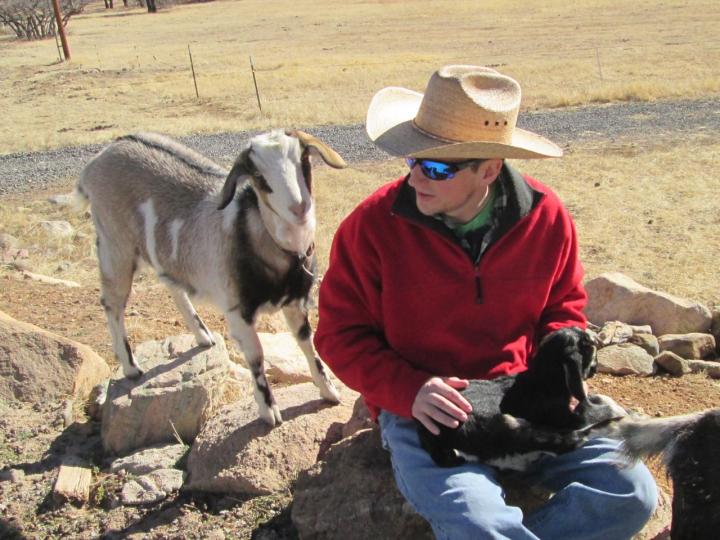 She could also grab a straw hat snack while she was at it. 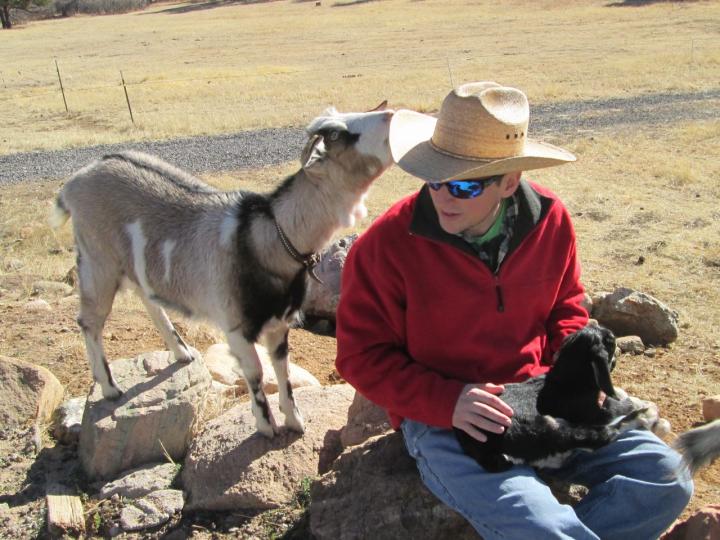 I took Pluto up to inspect the new babies first thing this morning. He adopted them immediately and thoroughly licked both of them before their mother came into the shed and made him get out. I’m glad he’s turned out to be so gentle with the baby goats. 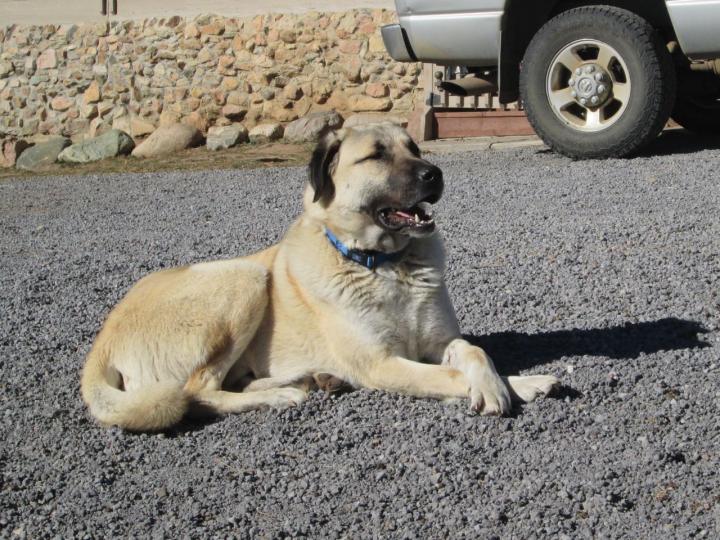 Rambo also came over to inspect his new descendants. I’m not 100% sure if these are his children or his grandchildren. I’m pretty sure they’re his grandchildren, but they were born in that window where there’s still a chance they could be Rambo’s. We’ll see if it becomes clear as they grow. 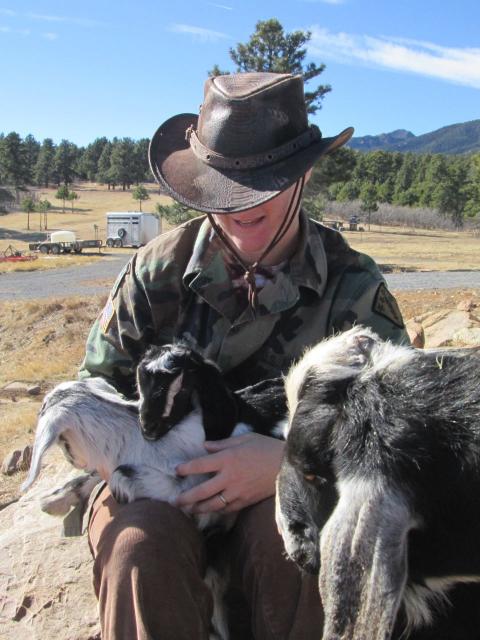 The rest of the goats were bored by the new arrivals. 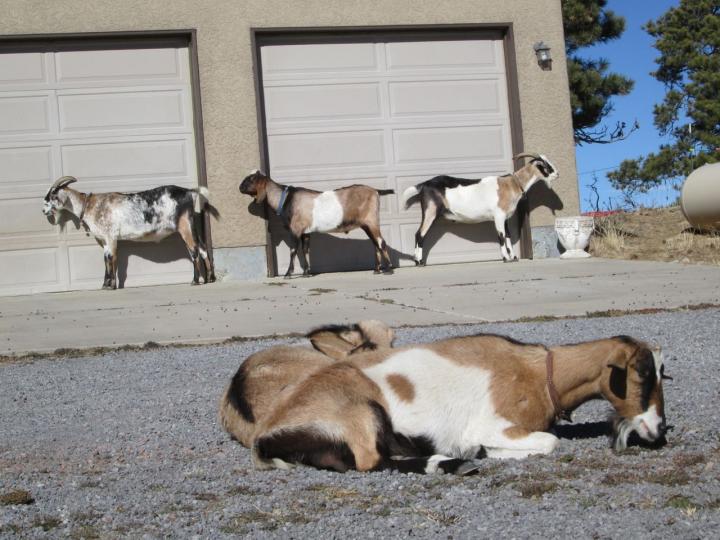 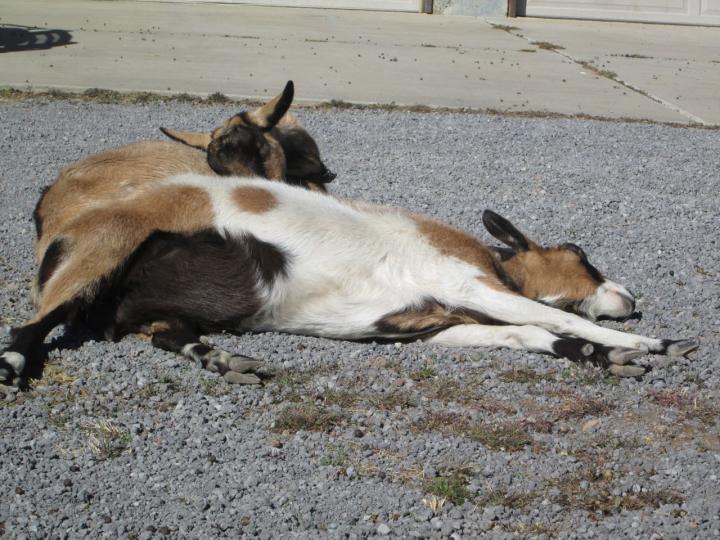 What’s better than a baby goat in your lap? 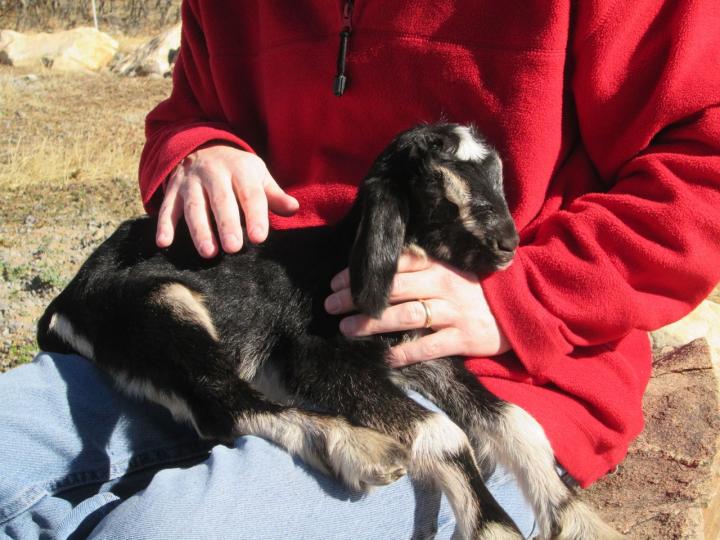 Why TWO baby goats of course! 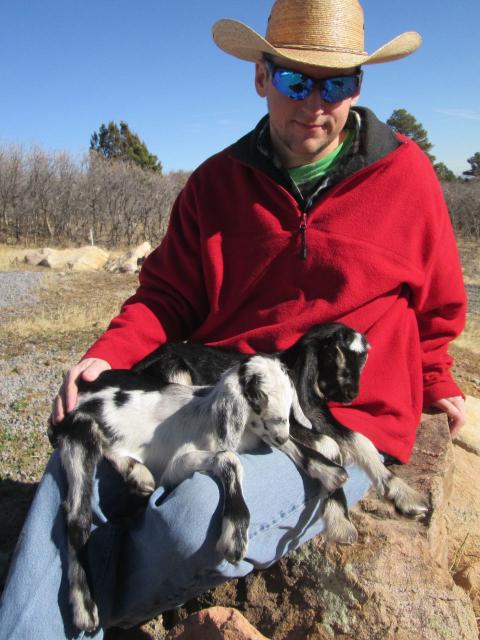 Wait, did one of them just smear something gross onto my hand? 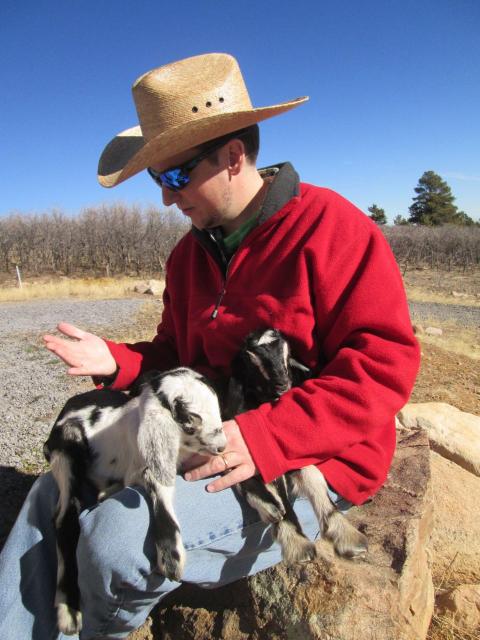 Let’s stick with this end, shall we? 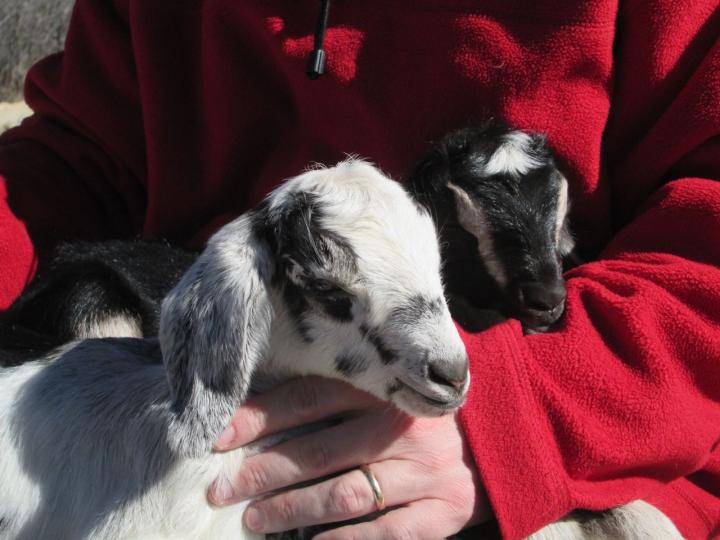 You can tell this baby is related to Sputnik! The face is nearly identical! But she is Sputnik’s half sister after all. 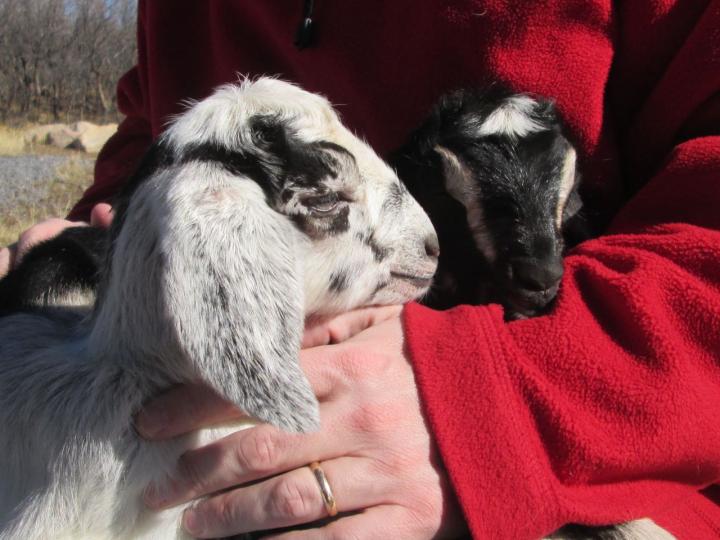 Phil should be a cowboy hat model. 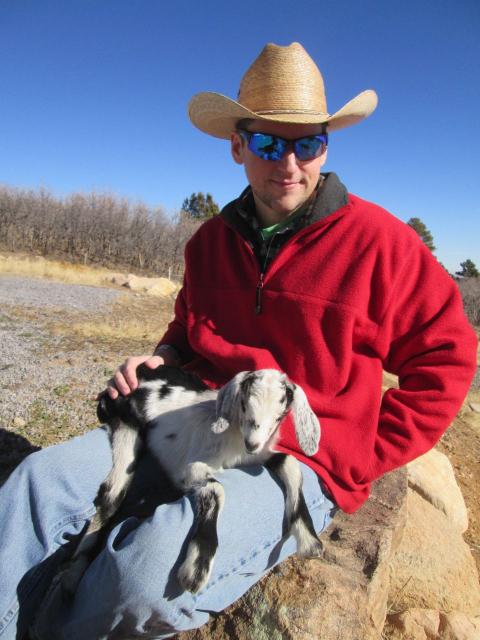 My hat may be cooler than Phil’s, but I don’t think modeling is my forte. I’ll leave that to my gorgeous husband. 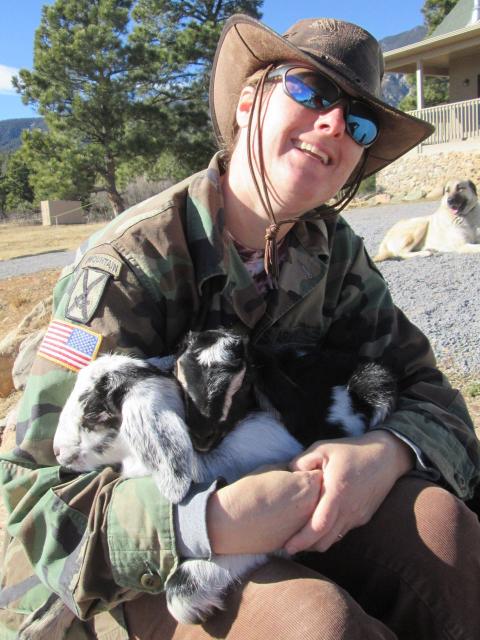 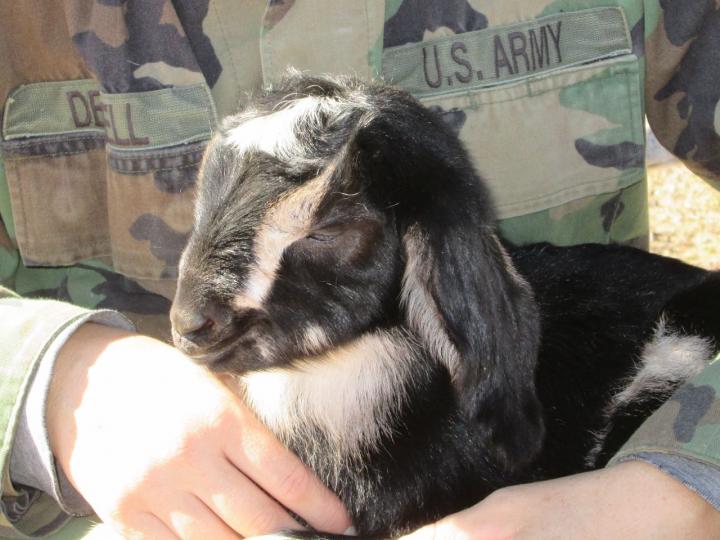 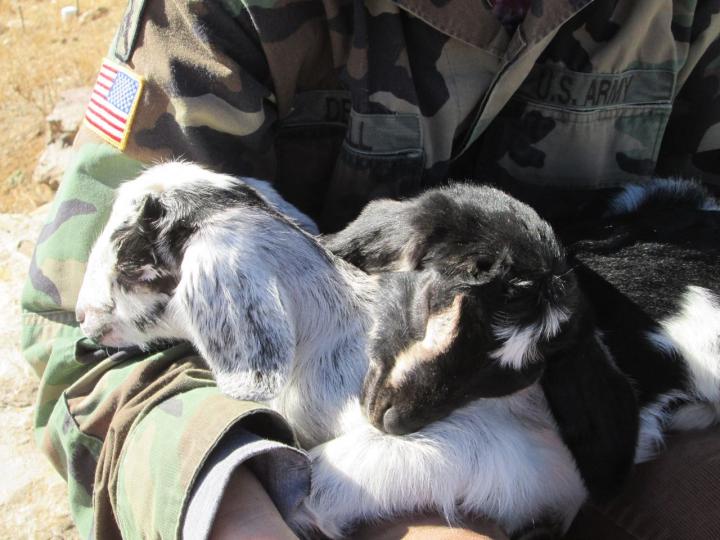 If I didn’t know better I’d say this baby was a cross between Finn and Sputnik! She’s got Finn’s flashy coloring and Sputnik’s wild face. Her front end is going to darken as she matures and she’ll be a tri-color when she grows up. Petunia is Finn’s half-sister and Sputnik’s mother, so I suppose it’s no surprise that we have a kid who resembles both of her male relatives. 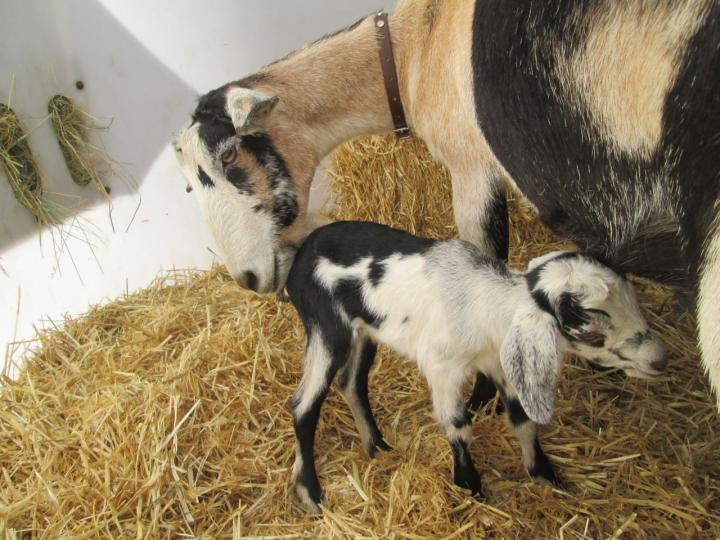 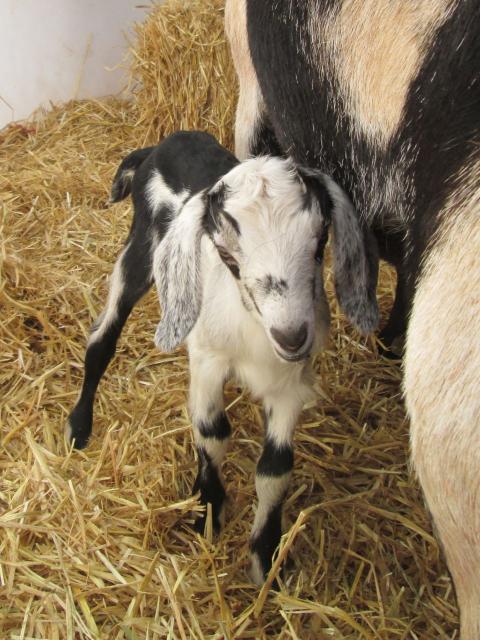 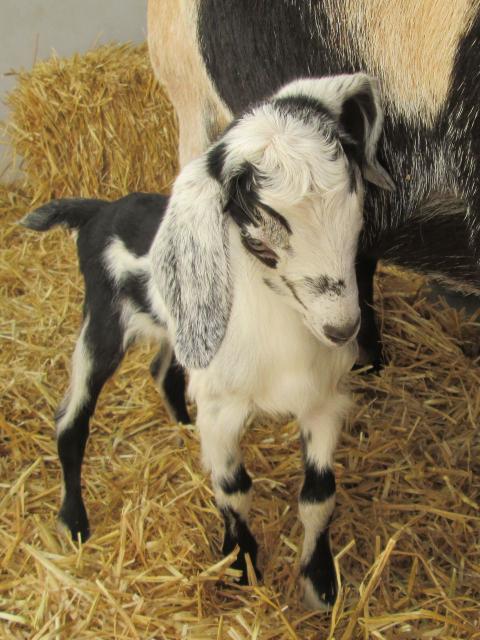 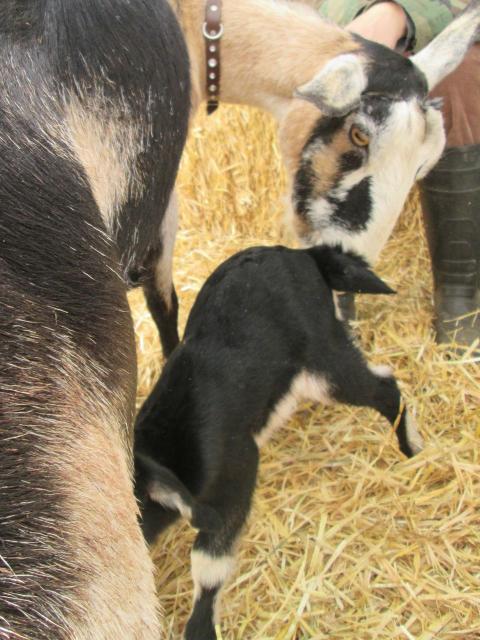