Last Sunday Phil and I took the whole day to try tackling the Bartlett Trail up to south Greenhorn Peak. It’s anywhere from 8-12 miles to the top (depending on what you read and who you talk to), so we didn’t quite make our destination, but we came within spittin’ distance. 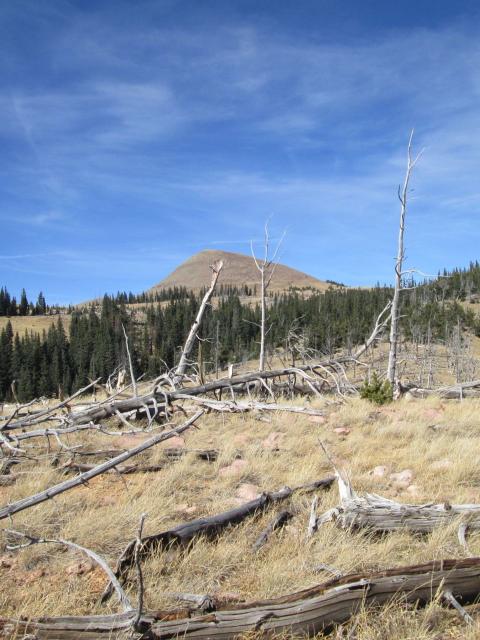 It’s not a terribly difficult hike, but it is long and the slope, though not exactly steep, is relentless. We hiked for four hours with only two very short breaks and got within a mile of the peak before we had to turn around. The days are too short to chance pressing on into the afternoon.

We stopped on a high ridge overlooking the plains. There was a forest fire there years ago and the dead trees lay eerily all around, with a few still standing at crazy angles. 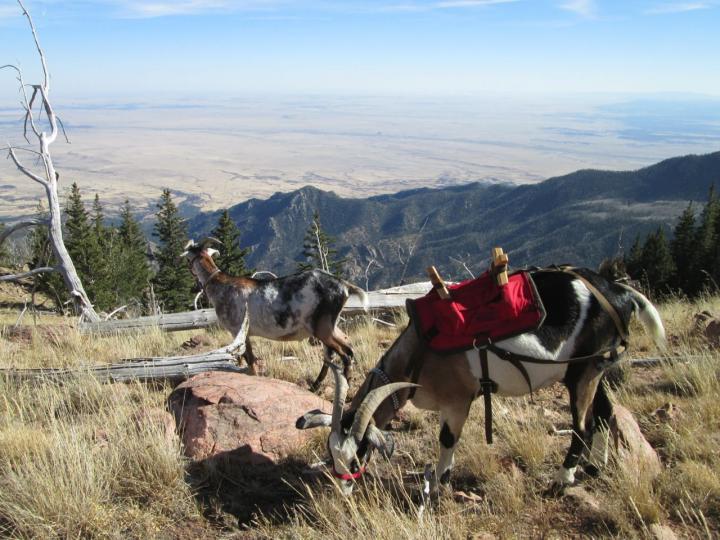 It was a pleasant day but very warm for October and Finn especially got a little hot on the way up. But we switched the pack from Finn to Sputnik and back as each got tired. 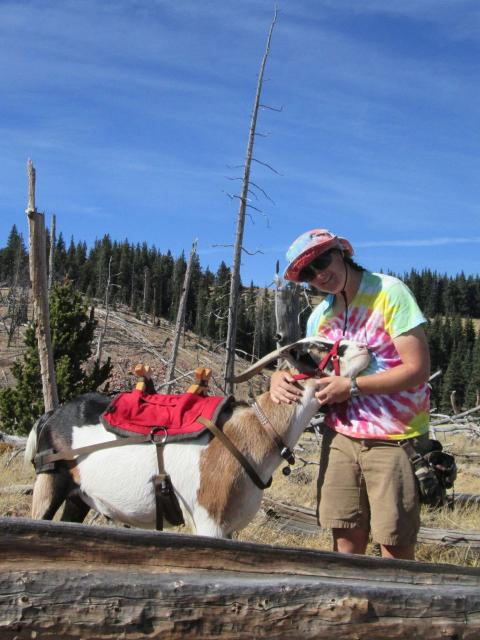 The only reason this photo is here is because the angle made me laugh. Sputnik looks like he shrunk in the wash! 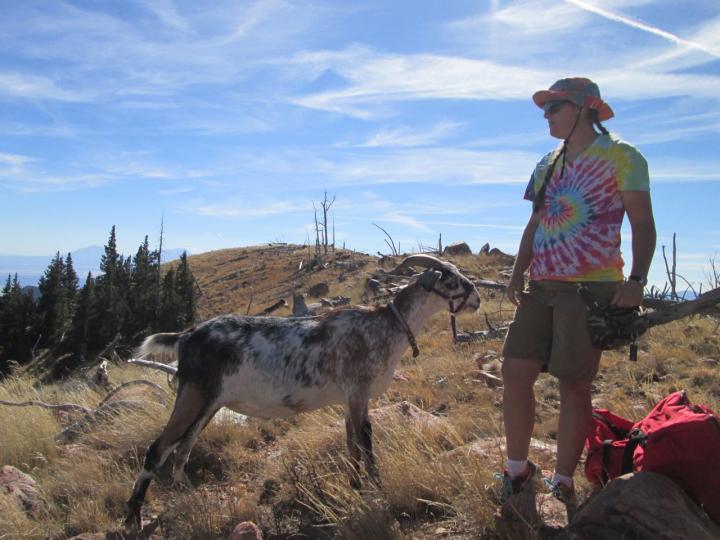 We found a nice log with a beautiful view and sat down to rest and eat a late lunch. There was plenty of grass for the goats and lots of things for Phil and I to look at through the binoculars. 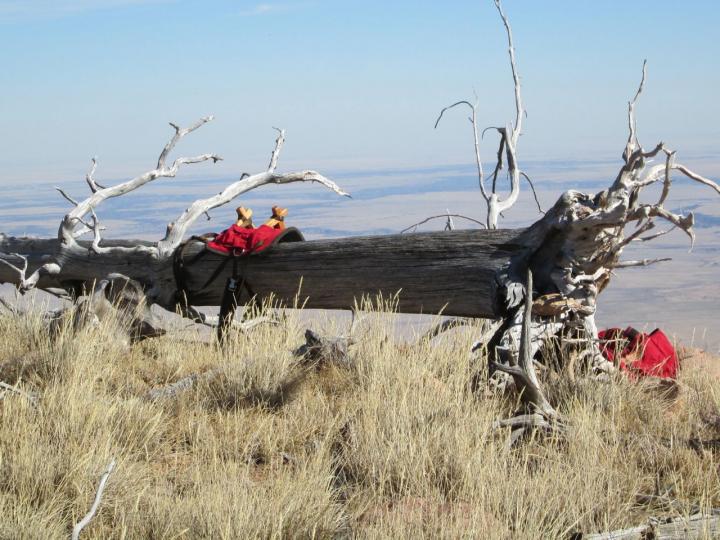 Sputnik seems pleased with himself. 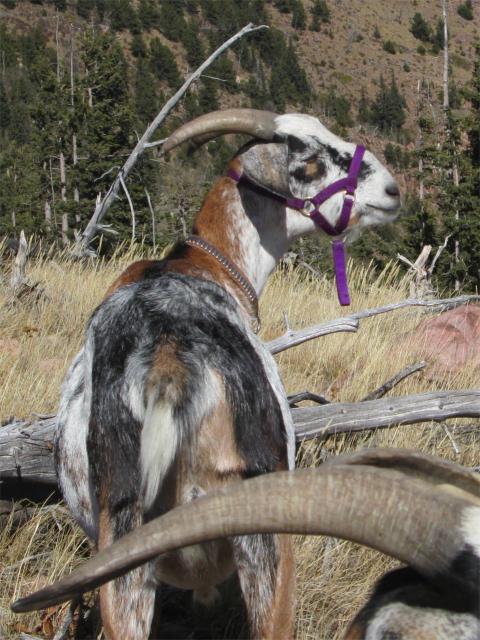 We headed back down around 2:00 with Finn taking the first shift at pack-carrying. 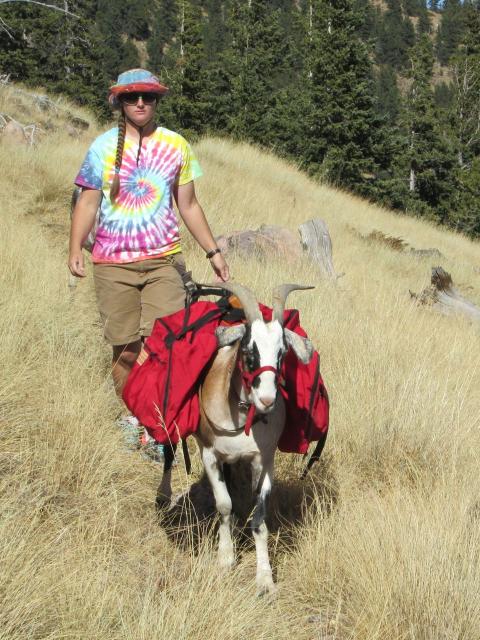 There was a ton of deadfall on this trail, and a few of the logs almost “stumped” the goats–get it? Haha! 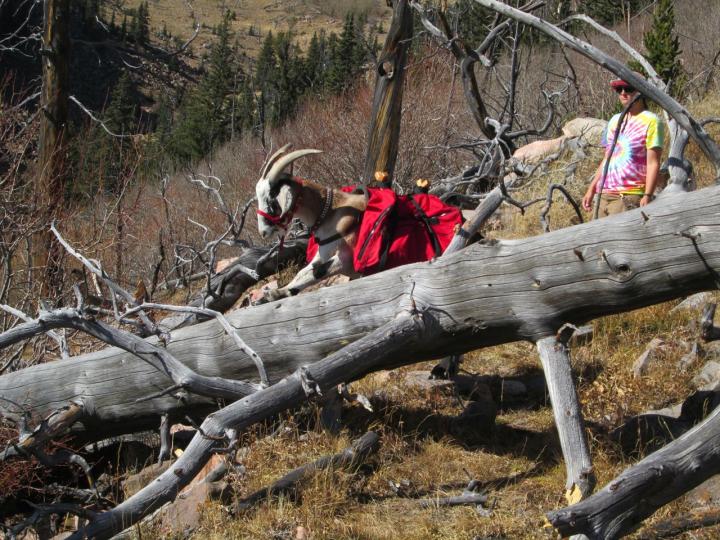 Too many branches–Finn was afraid the pack would get stuck going over or when trying to land. It was fun to watch him try to figure it out. 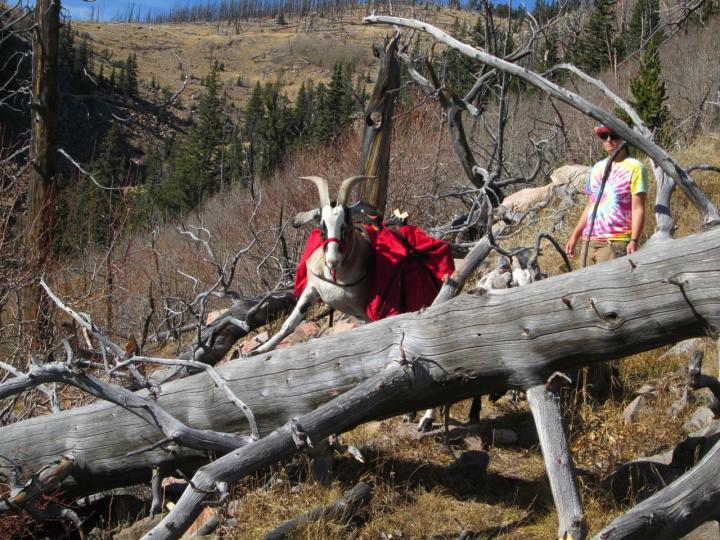 So he took the lower route (the one he’d watched Sputnik use on the way up). 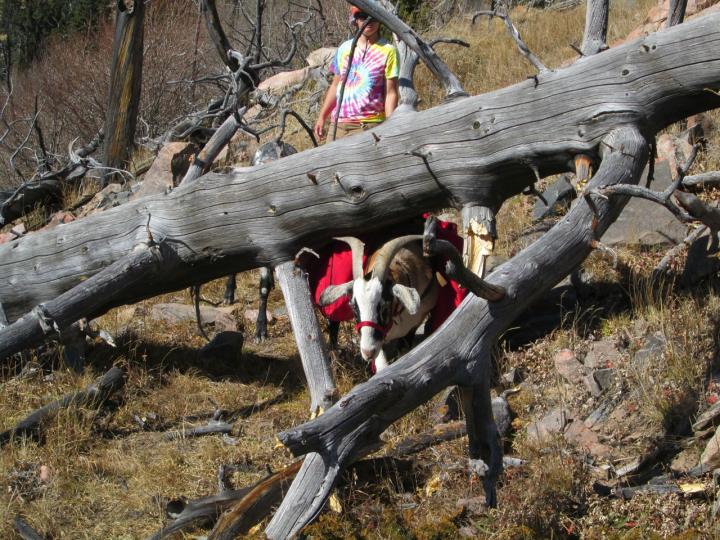 Finn had some trouble earlier in the day with a low tree. He tried three times to go under, but the crossbuck got stuck every time. Rather than crouch lower (which he could easily have done), Finn got frustrated and finally leaped over the top (he’s a magnificent jumper when he wants to be). Sputnik is a capable jumper but prefers to try other things first. It took Sputnik only one try to realize he had to crouch lower to clear the crossbucks. I guess Finn learned something from watching Sputnik navigate that pack.

Because this time he made it! 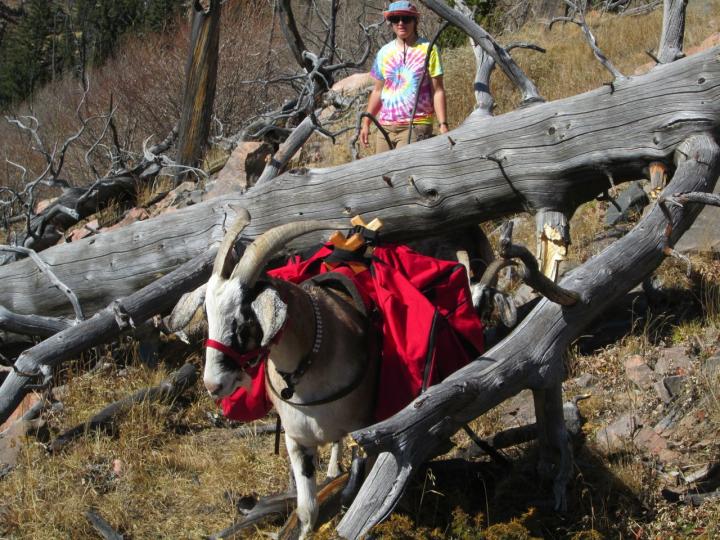 We had a bit of trouble getting Finn to stay on the trail at the switchbacks. He was about to shimmy down this bank when I stopped beneath him and hollered “NO!” He stopped in his tracks and gave me a chance to snap a nice photo before he turned and sauntered reluctantly but obediently down the trail. 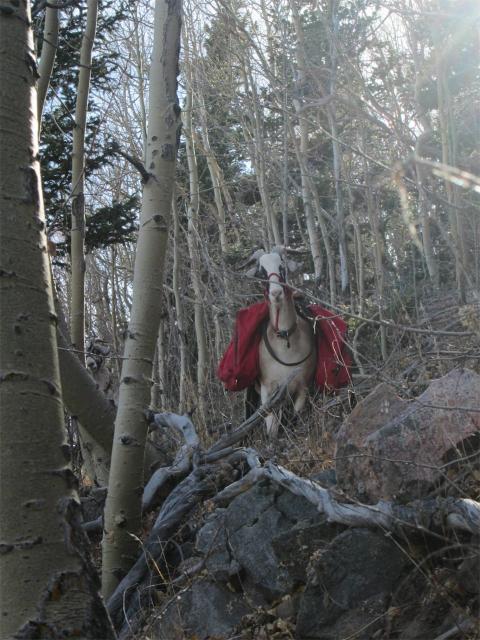 And in case anyone is wondering, yes Sputnik DOES carry the pack! In fact, Sputnik carried it for much of the way up. But we were on such a warpath to reach the top that we didn’t stop to take pictures. Sputnik took over from Finn for the last part of the hike down. 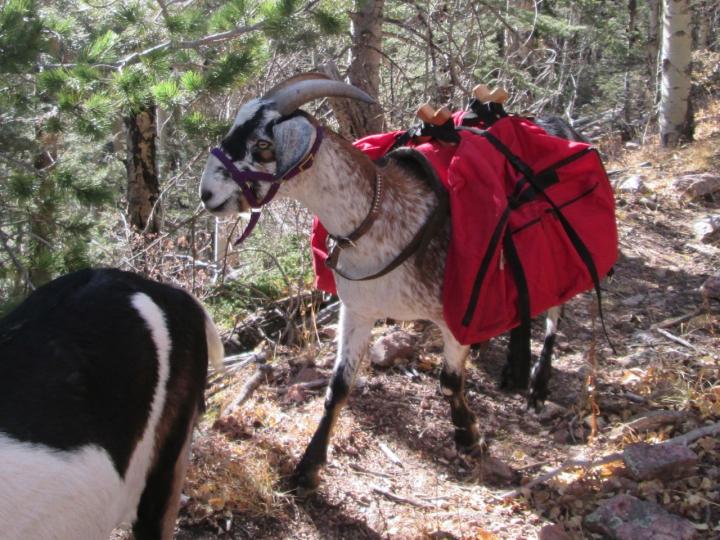 There were hardly any leaves left. A wind storm the week before had left the trees bare. But every now and then we encountered a small patch of faded gold. 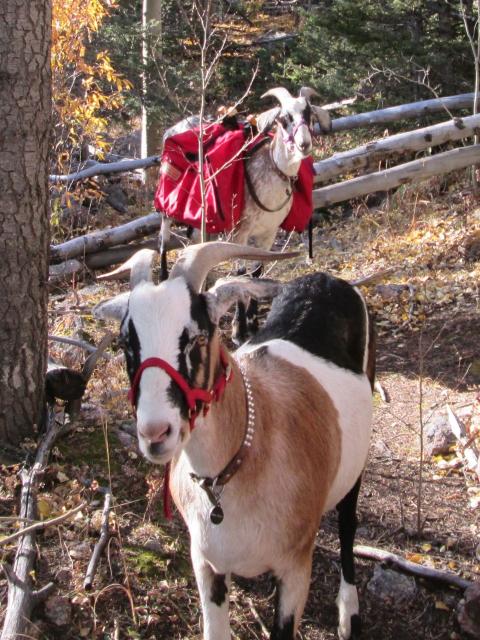 Yesterday Phil and I headed into Colorado City for a load of water. We were planning to take Finn and Sputnik with us to go for a walk around Lake Beckwith, but they were nowhere to be found. We wandered over the ridge and hollered, but the only goat to answer our call was old Cuzco! As the others didn’t seem inclined to make an appearance, and as it had been a very long time since Cuzco had gotten to go anywhere with us, we decided to take him instead.

The poor fellow isn’t doing so well these days. He’s been losing weight since the grass turned brown and he doesn’t seem to be finishing his meals lately. He had a very hard time climbing into the truck even though he was able to use the trailer as a step. The two-foot gap between the trailer toolbox and the truck tailgate seemed a canyon-wide leap to his weary old bones. Even the 15-minute drive was hard on him. He was panting when we got to the lake.

We made our way around slowly and stopped for a while to let Cuzco eat the soft green grass still lingering near the lake’s edge. Even walking is laborious these days, but he kept up and I could tell he was enjoying himself.

We took Cuzco to Lake Beckwith nearly every day when we lived in Colorado City. One old gentleman remembered and stopped to say hello. “I haven’t seen you in ages!” he exclaimed, not realizing that we moved almost six years ago. Cuzco hadn’t died or been sold or disappeared–he simply was no longer one of the lakeside regulars. I think his appearance brought a smile to the old neighborhood, and I’m sure the old neighborhood brought a smile to Cuzco. The walk brought me back to those days when Cuzco was in his prime.

He was lean and muscular back then, and my tie-dyed hat was not yet faded. 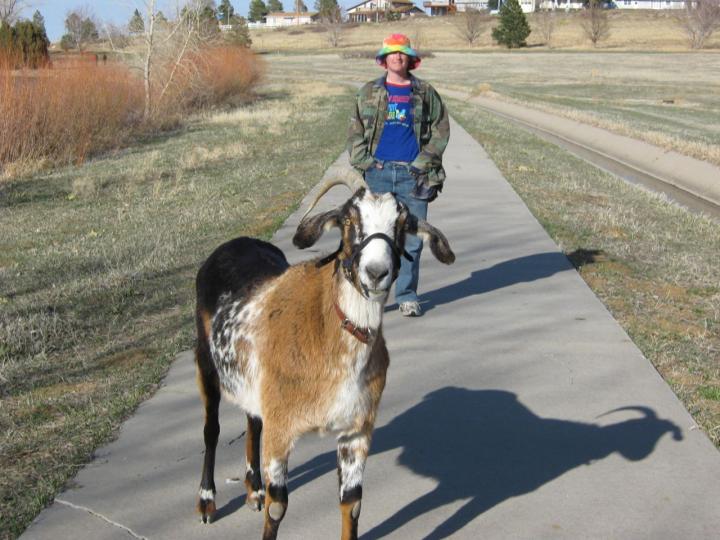 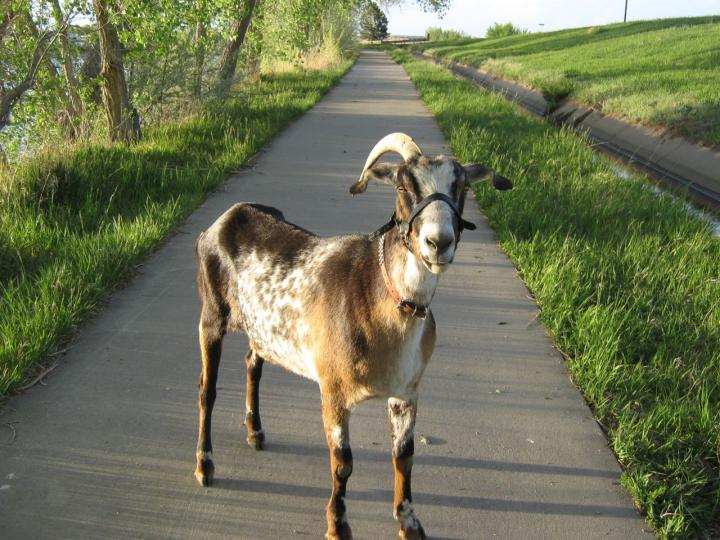 The parking barriers have been knocked down in the years since we moved from Colorado City, but back then they provided a wonderful opportunity to play and show off. 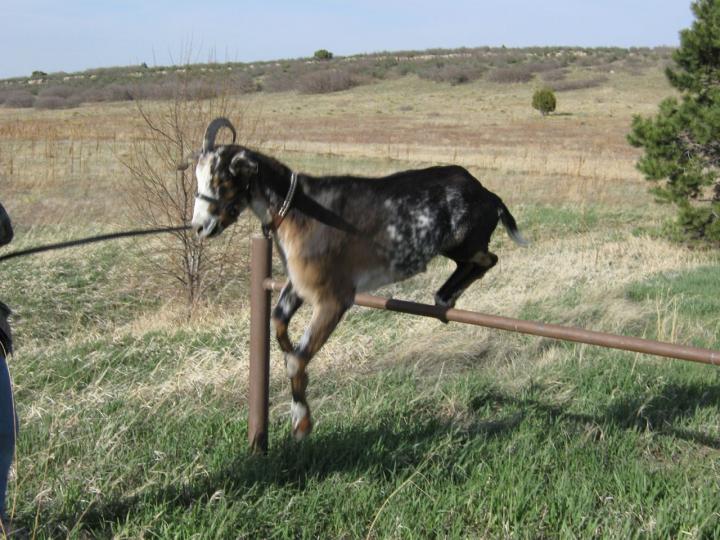 A small gap between truck and trailer may be a poser now, but once upon a time Cuzco was a lean, mean, jumping bean. I once watched him clear a six-foot horse panel from a standstill. He didn’t even scramble at the top–he just cleared it. He’s been an amazing companion, and at almost fifteen years and more close calls than I can count, I feel fortunate he’s made it this long. I don’t know what this fall will hold for him, but we may need to make a Decision before long. Naturally I want Cuzco to live as long as possible, but not at the sacrifice of his dignity or his enjoyment of life. Until we make that Decision, we cherish the time we have left.

Finn and Sputnik got to strut their stuff at the Rye Homecoming parade this afternoon. We’ve been busy showing goats, vacationing, and trying to keep up with life so we haven’t had time to drive them since last month at the State Fair. They weren’t as “sharp” as they were this summer, but they remembered their lessons and were very good boys in spite of the long break. We were a little late for the lineup (someone gave us the wrong information), so we had to race past a long line of old tractors to get to a good spot. The fellas were a little nervous about passing all those big, smelly, noisy, backfiring things, but with a bit of encouragement they kept up a good trot and we made it to our place behind the horses. Barking dogs and cheering, waving crowds did not faze them at all.

The team was a big hit with the locals and got a lot of cheers. It was a very short parade but lots of fun. The weather was beautiful–clear, crisp, and cool but not windy. Getting back in the driver’s seat reminds me that we need to make sure to get out and do this more often, not only because it’s good to keep the boys sharp and in good physical condition, but because it’s just plain FUN! 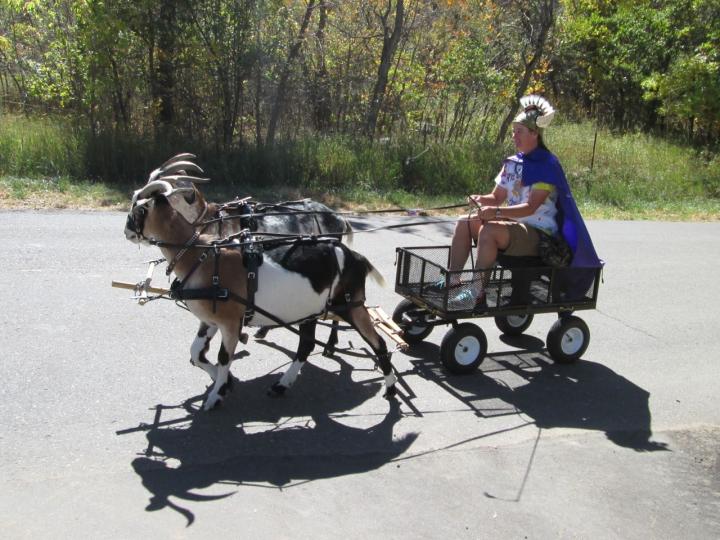 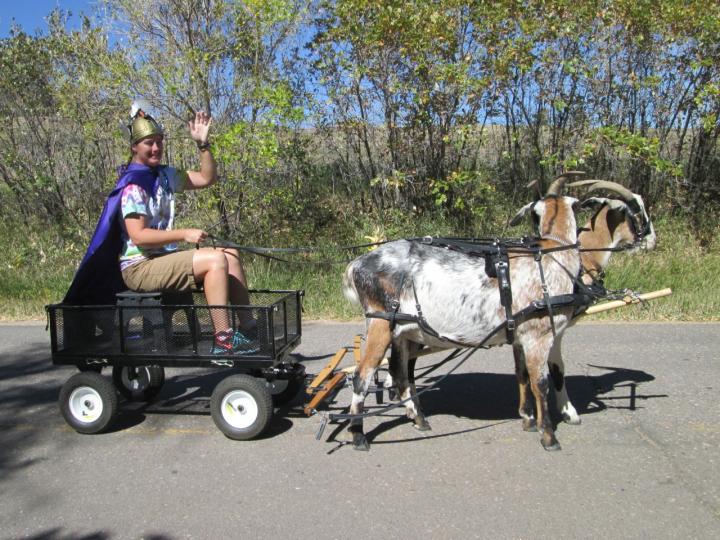