Phil and I were busy, busy, busy last week, and Thursday was no exception! Thursday was the day of the annual Pueblo County Fair working goat competition/clinic. Phil and I first competed in this class with Cuzco back in 2008 and were disappointed to find that our only competitors were 4-H kids with their young dairy and market goats even though the class is open to the public. Since then we have withdrawn from competition but have somehow moved into a position of being in charge of the event. Since there are no kids with trained working goats we have moved away from strict competition into more of an open play event where kids can borrow our goats and try the obstacles with animals that somewhat know what they’re doing. We brought Finn, Sputnik, and Tigerlily this year and several other kids brought their young dairy and market goats as well. 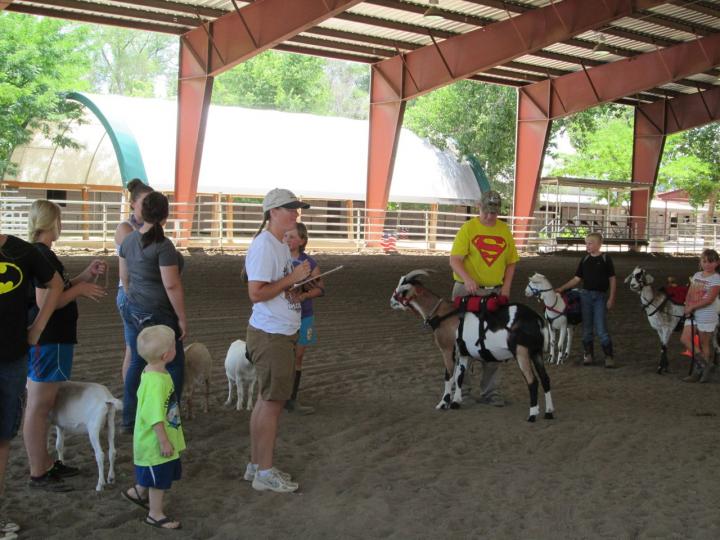 I was particularly impressed with this young lady who took her little brother through the obstacle course with their Boer kid. She (and all her siblings for that matter) were very gentle with the goats and helped guide them through rather than dragging them like most kids tend to do. This little goat is being raised with his brother as a working wether prospect. The father hopes to teach them to pull a cart as a team in a couple of years. I’d say this little goat is off to a great start! 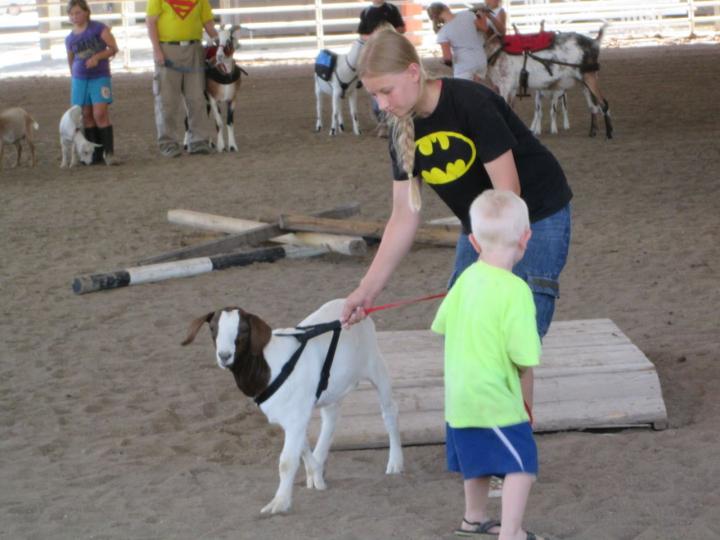 The oldest son in that family was also gentle and understanding–to a fault. He took an immediate shine to Finn, but Finn unfortunately spotted an amateur and immediately took advantage of the situation. Finn, who is usually an overachiever and loves to show off at events like this, instead adopted a tired, ignorant, and almost disabled attitude on the course as his overly kind young handler plied him with ever-more cookies to try to entice him over the simplest of obstacles. Finn got to where he wouldn’t look at an obstacle without treats given before, during, and after every effort. It was a classic example of an animal training a human. 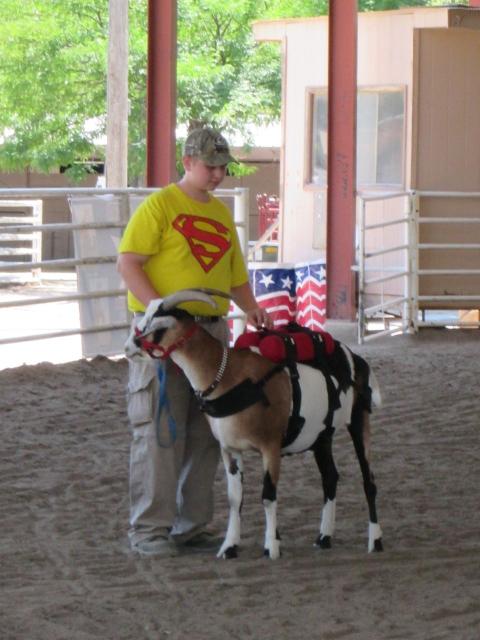 Finn, who is usually a magnificent jumper, stared mournfully at the ground-level end of this pole as though it were ten feet high and covered with spikes. His patient handler wheedled and coaxed until Finn eventually sighed like a martyr and dragged his feet over one at a time with heroic effort. 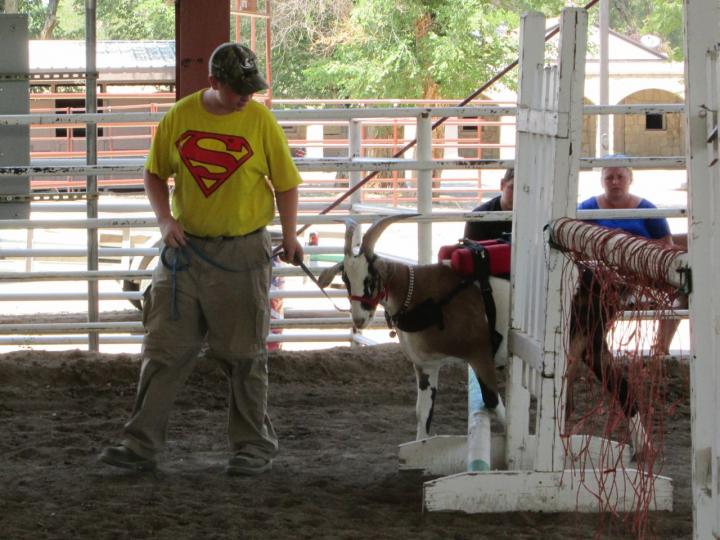 Sputnik, on the other hand, could not have been more cooperative. He behaved perfectly for every kid that handled him (and there were quite a few after it became obvious that he was the best at navigating the course). We ended up having a little judged competition and this boy won with Sputnik. The only thing that was sometimes troublesome for Sputnik was the ground tying obstacle. The kids had to park their goat’s front feet inside the hula hoop then drop the rope and walk around the cone. Sputnik stood very nicely, but some of the kids were afraid he would leave so they bolted frantically back toward his head to grab him before he could run off. This had the predictable result of making him run off. I was pleased to see that he never ran far or fast so the kids were always able to catch him without help within a few strides. 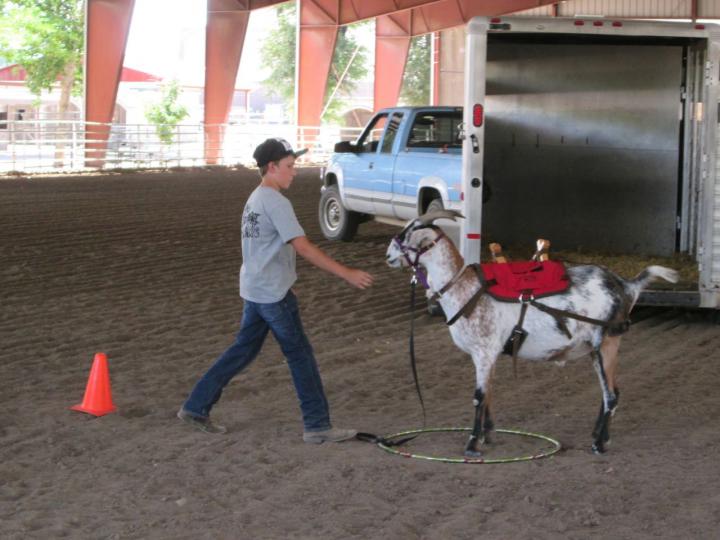 This poor girl had a little Alpine doeling who was not trained to lead, let alone walk through an obstacle course. The goat kept sitting or laying down every dozen yards or so. The worst was when the poor, pathetic creature collapsed completely on her side and just laid there like a dead animal until someone picked her up. The girl was very patient with her and never pulled hard on her neck or anything, but the goat was determined not to walk and I felt sorry for the young handler. This is the same talented little girl who did so well getting a reluctant Pac-Man to negotiate the obstacle course at this same event two years ago and who worked with him again last year. She missed Pac-Man and I know she was unhappy with her own goat’s attitude. 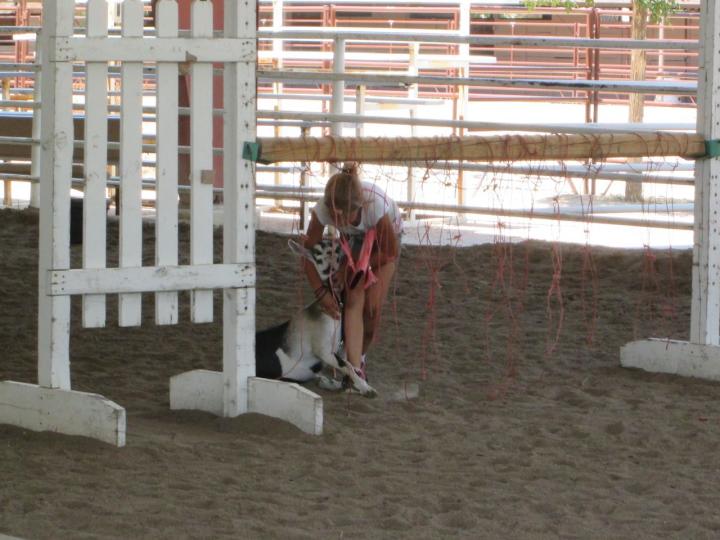 So I had her put her goat away and work with mine. She led Tigerlily through very nicely and even won 5th place on the course with Sputnik. But if she’d had Pac-Man she probably would have won. Those two had a very special “love at first sight” bond. 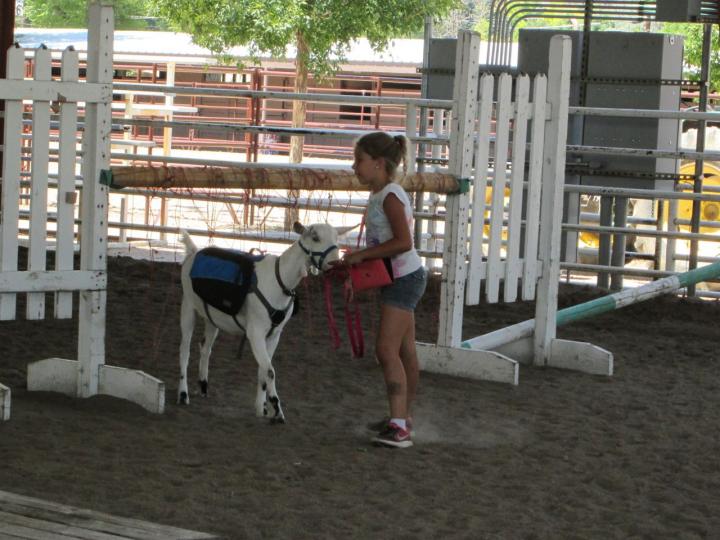