Our last 2018 kid was born on May 31, and we rounded out our Beatles-themed season by naming this little guy “Sgt. Pepper.” It’s only fitting to have nine babies in a Beatles-themed year. He’s a tiny little peanut, weighing in at only 5 lbs. at birth. Once we dried him off he felt like a little ball of dandelion fluff–certainly not much heavier! 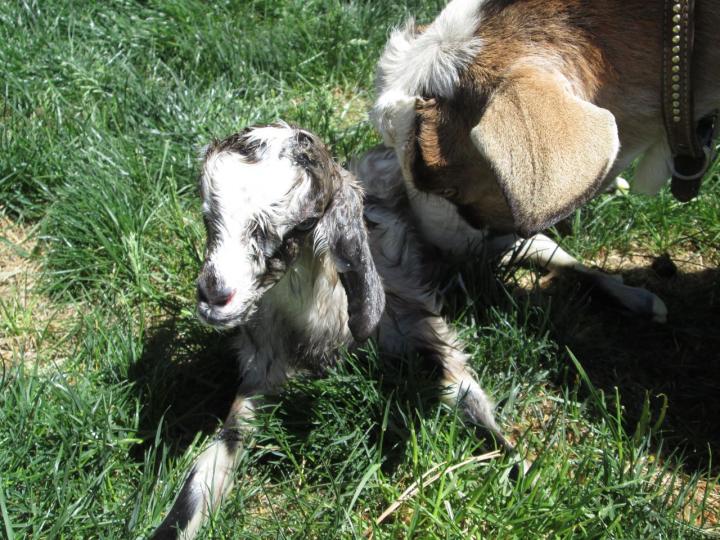 Coral couldn’t have picked a much prettier day to have this little guy, but she could have picked a more suitable location! I could tell she was getting close, but I wasn’t at all sure how close. She’s a first-time mom and didn’t really seem to have the routine down. She came for our daily walk with the herd at 1:15 and she never separated herself or dug nests or any of the other little things impending mamas do. She was more vocal than usual but that was it. Her cute little udder seemed to grow every time I looked at it. It felt a little hot to the touch and had some lumps which worried me, so after our walk I spent a few minutes massaging it with hot towels. It was only a bit of congestion and the lumps worked right out, but the massage seemed to stimulate some contractions. I didn’t know if they would continue or pass, so I put Coral off the patio and turned my attention elsewhere. Phil went back in the house to work.

Coral was baa-ing a lot but it soon faded into background noise as I got busy with other things. After about 15 minutes I began to notice that the baa-ing had changed in tone and frequency. I peeked round the edge of the house and she was lying among the wood chips in a baking-hot corner where I cut and stack firewood. And there were hooves peeking out from under her tail! I rang the doorbell to summon Phil down from work and I hurried over to fetch Coral up from the hot, dirty, and uncomfortable spot she’d chosen and pulled her onto a patch of clean grass nearby.

Sgt. Pepper made his appearance shortly after 2:00 with no assistance. Well, I tugged gently on a leg as he came into the world, but Coral did all the work. Much like his mother, who we’ve nicknamed “Fuzzy”, there was more hair than goat, and this funny little guy had 1 1/2 wattles! There was a normal, furry wattle on the left side and a hairless black half-wattle on the right. It looked very silly. You can just see the naked little thing poking out from under his neck in this photo. 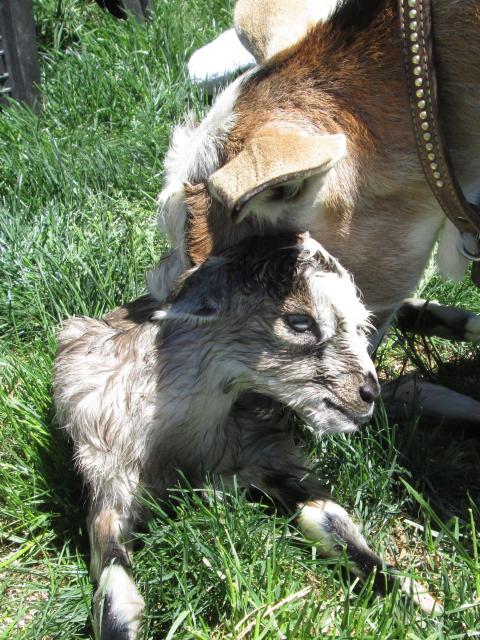 Penny was very curious. I kept trying to push her back because mamas are usually very protective of brand new babies and don’t want other goats poking their noses into the action. I didn’t want Coral to trample little Pepper in her zeal to run off the interlopers. But I needn’t have worried. Coral was so enamored with her offspring that she didn’t even look up when first Penny and then Jezebel (who is often mean to Coral) came up to sniff the newcomer. 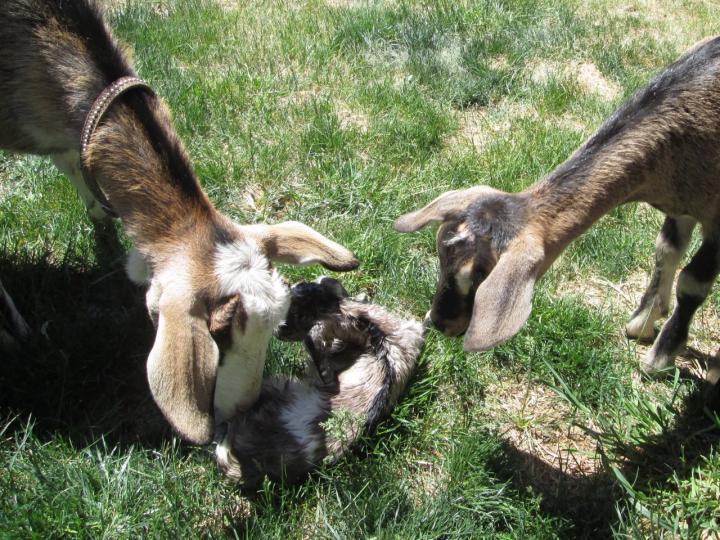 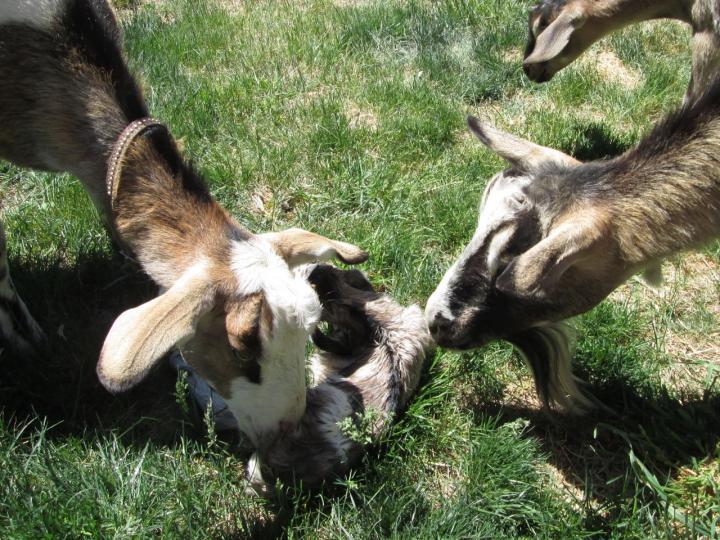 Coral was so cute about Pepper’s birth. She’s already one of the most adorable goats I’ve ever seen, with those big, wide-set eyes, the perpetual Cheshire cat smile, and permanently curious ears. When Pepper thudded to the ground with a crash (yes, Coral was standing, and yes, I failed in my catching duties), Coral whipped around with a look of shock on her face like, “Oh my gosh, did that just come out of me??” She paused for a moment in pure disbelief, then cautiously lowered her head and began to sniff and poke timidly around at the new baby. She looked both curious and terrified at the same time. She took a few careful licks then suddenly her fearful attitude turned to pure rapture as the realization dawned on her that this baby was her very own to nuzzle, lick, and enjoy. She couldn’t get enough of him after that and is a wonderfully careful and attentive mama. 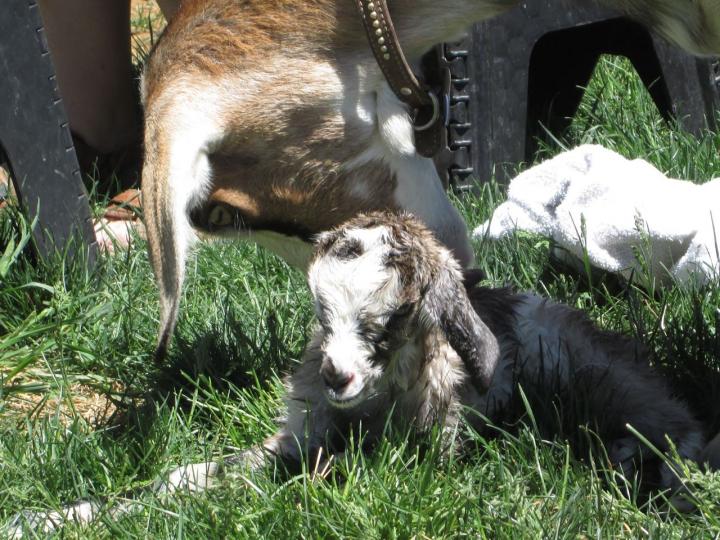 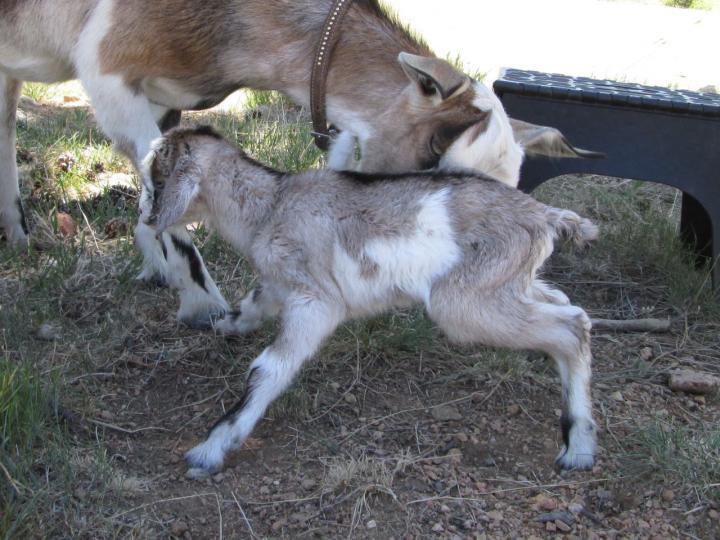 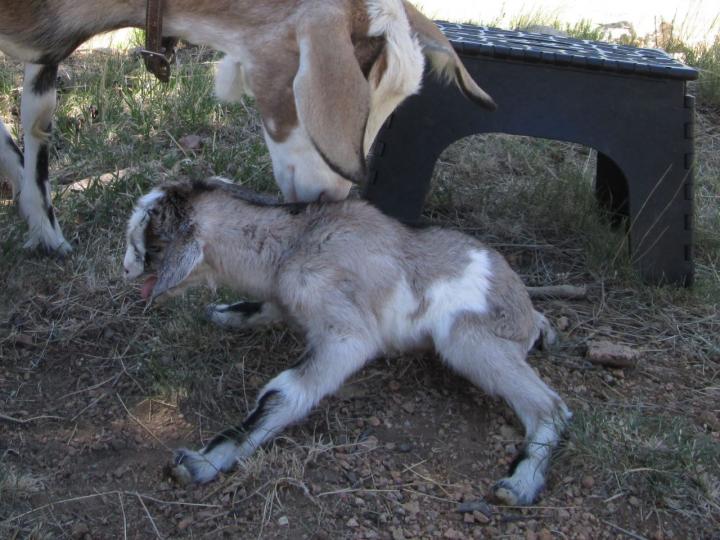 “Darn right I pushed… you’re growing up too fast already, and I was not finished with your bath!” 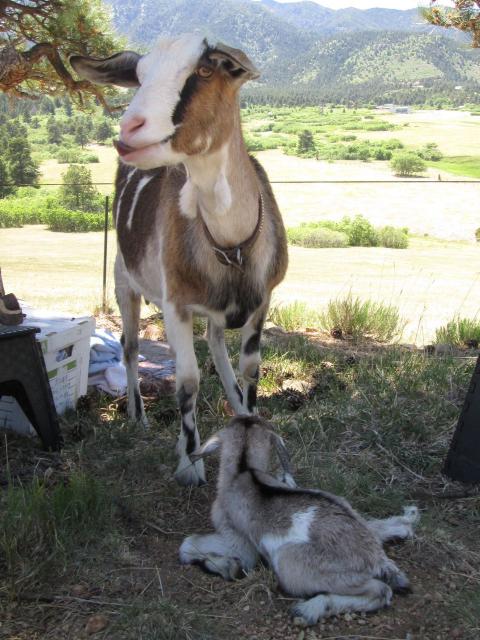 Once Coral was satisfied that Pepper was thoroughly clean and dry, she plopped herself down and snuggled right up to him in a possessive manner that I’ve not seen in a goat before. All of our mamas are proud of their babies, but Coral is in a league of her own. She’s spent the last two nights curled up with him in the shed as well. Most of our mamas tend to put their kids down for a nap and then take a little time to themselves, but Coral is spending all of her time with her new baby for now. 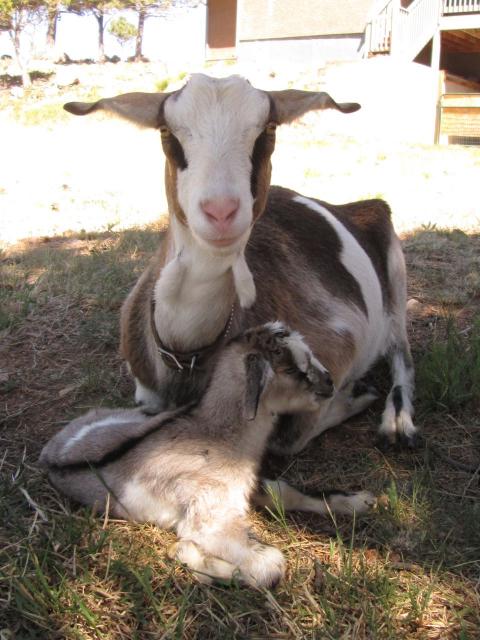 As a singleton, I have a feeling this little guy is going to grow very quickly once he gets going on that udder. And as a funny note, I was talking to Phil about removing Pepper’s hairless half-wattle because it looked like a long, nasty, black tick to me. I guess Coral had the same idea because when I checked on him a couple of hours later it was gone. Coral had nipped it right off! So now he’s a little one-wattle goat. So funny! 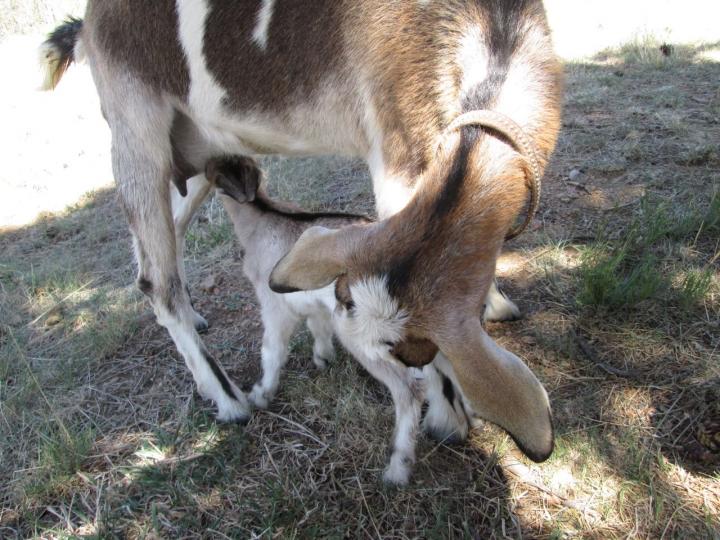 Is there a more idyllic setting in which to have a baby? I ask you! 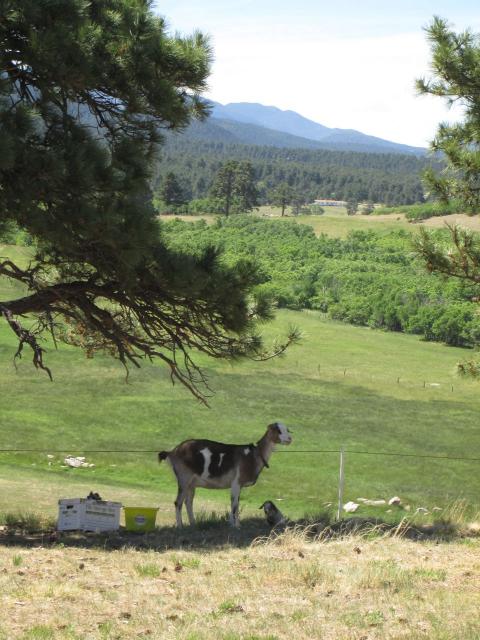 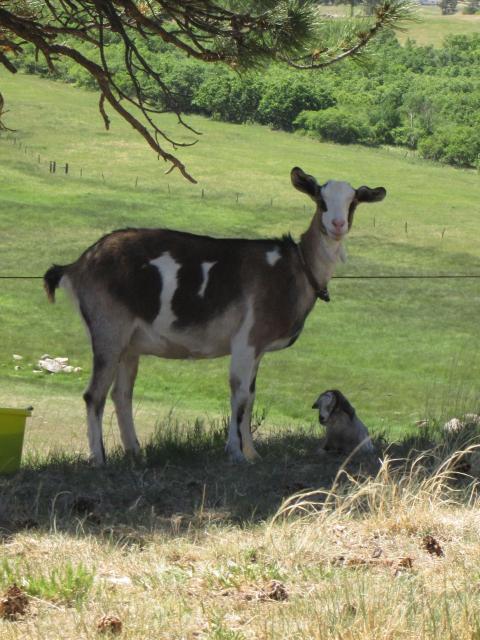 Meanwhile, can anyone see Nauti under all these kids? 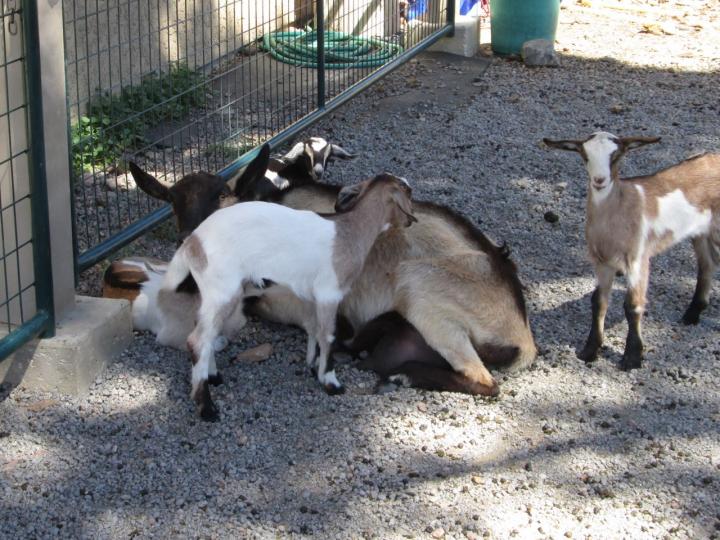 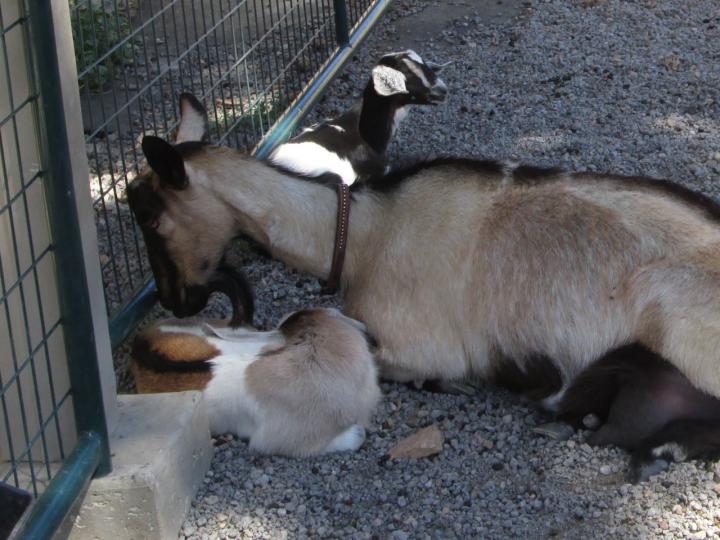 Coincidentally, Phil and I just celebrated our 19th anniversary and we now have 19 goats to celebrate it with!