It’s easy to think, as we observe our goats bashing each other at the feeders, bumping one another out of the way, and smacking their heads bloody, that they are generally selfish and hostile creatures who lack compassion for other members of their own species. It’s also easy to underestimate their intelligence. Yesterday, our goat TinCup reminded us that goats are not only quite intelligent, but they are capable of a great deal of compassion despite their rough-and-tumble displays.

I was down at the saddle club when Phil decided to go for a hike. He was getting into the truck when our goat TinCup came running up the hill toward the house, hollering at top volume. TinCup had given birth the day before, and since it is not uncommon for our new mamas to hide their babies somewhere (often in one of the goat shelters) and then forget where they put them, Phil didn’t think much of it and continued to climb into the truck. But TinCup parked herself outside the driver door and kept bellowing. 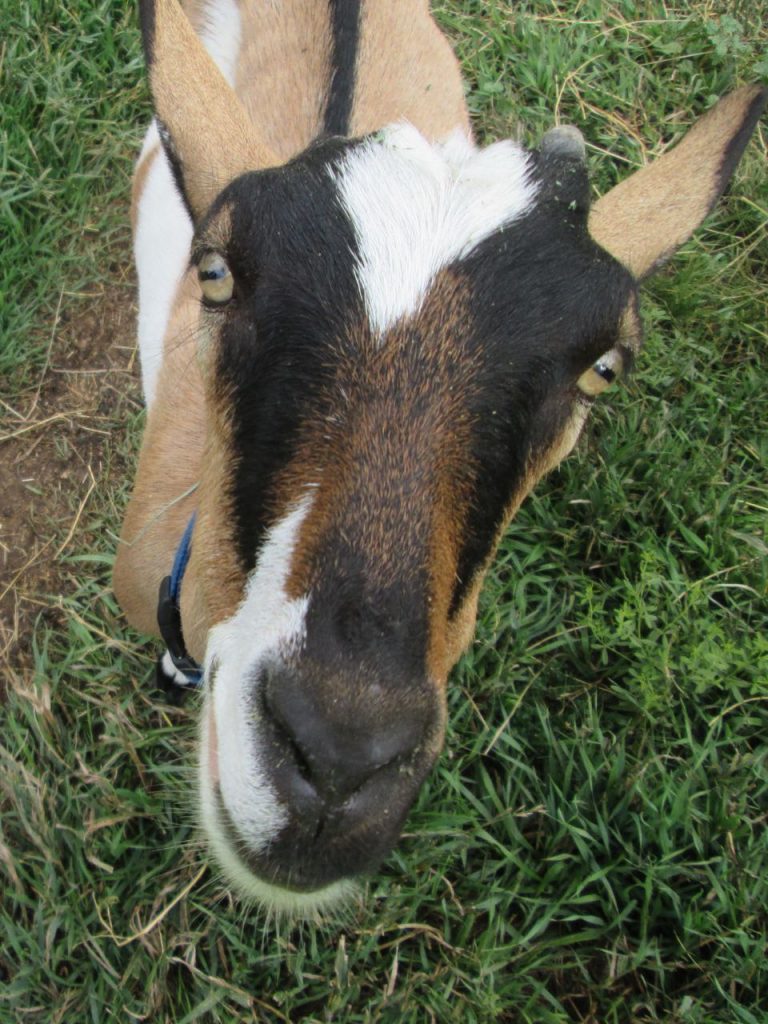 Phil rolled down the window.
“TinCup! Go find your babies!” he said.

TinCup looked at him and hollered.

Phil started the engine, but TinCup persisted, gazing intently at Phil through the driver window as she yelled. She was clearly in distress and was determined to make Phil pay attention to her. Phil stopped the truck and looked out at TinCup. Animals aren’t stupid, and TinCup obviously had something important to tell him. He got out and looked at the other goats who were all gathered near the horse trough at the bottom of the hill. He heard a baby crying. This was unusual. Mama goats usually run toward the sound of a crying kid, but TinCup had run toward Phil. Now that she had Phil’s attention, TinCup ran down the driveway toward the herd, stopping periodically to check over her shoulder to make sure Phil was still following her.

When Phil got to the bottom of the hill, he could hear a distressed cry coming from the horse trough. A baby was in trouble! But it wasn’t one of TinCup’s kids. No, her kids were safely tucked away in their shed. The cry was coming from Sadie, a ten-day-old kid belonging to TinCup’s friend, Nauti. Sadie had jumped into the horse trough which I had filled the night before. It was too deep for her to stand and she couldn’t get out. She had jumped up, thinking it was a platform, and had plunged into deep water instead. Sadie’s mother was standing beside the trough, frantic but helpless.

No sooner had Phil fished the soggy baby out than her brother jumped into the trough to see what he’d been missing. Phil fished the second kid out, then immediately dumped the horse trough over to prevent any further accidents. We’re so thankful that TinCup had the wits to seek help from the only creature who could do anything about the drowning baby. We’re also thankful that she cared about another doe’s offspring. Finally, we’re thankful that someone was home or we’d have come back to a tragedy.

I feel like the guilty party here. I know the danger of horse troughs and have warned other goat breeders about them. Normally during kidding season, the horses have a pond to drink from so I stow the trough away. But this year the pond dried up in a drought so I went into auto-pilot and continued to fill the trough without thinking about the fact that we had new kids on the ground. Phil and I went to the feed store the very next day and picked out a trough low enough for kids to see over the top. I even plunked a cinder block into the bottom so that if one did happen to jump in, they’d have an easy time climbing back out.

This could have been a tragic event with a hard lesson, but thanks to TinCup, the lesson was learned without the accompanying disaster. Three cheers for TinCup! 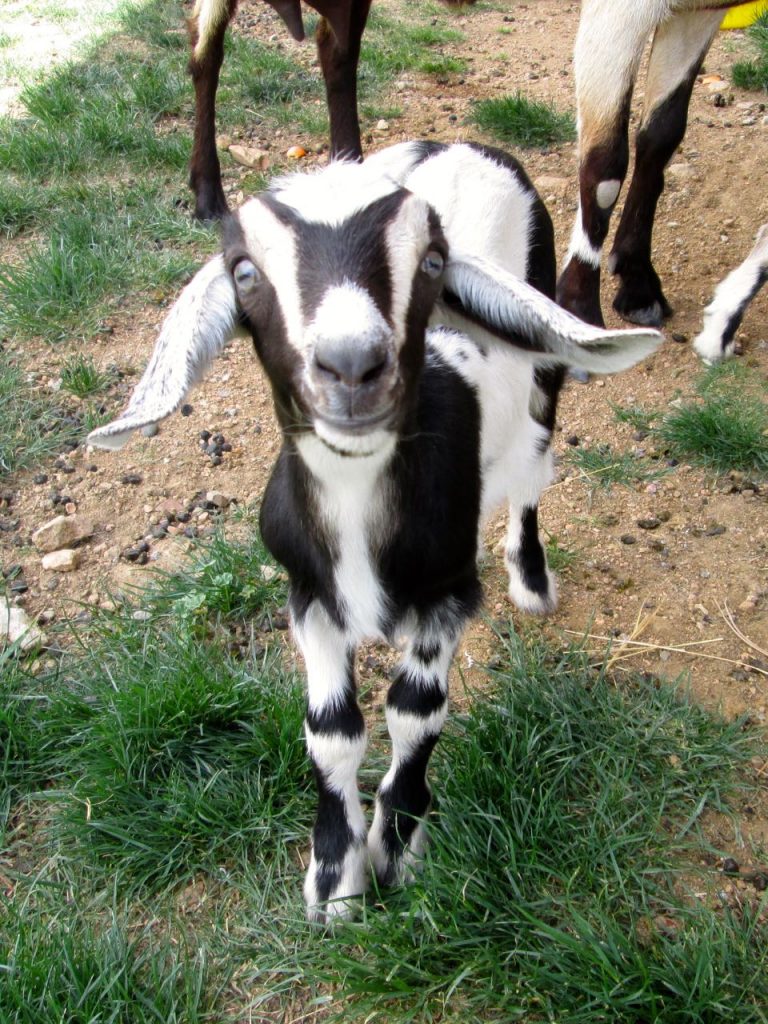 And here are TinCup’s new babies!

Sticking with the Beatles theme, we’re thinking about “Wild Honey Pie” for this one. Her eyes were very blue when she was born, but they’re already turning brown. She looked like a little Nigie baby with her flashy markings and the eyes! Also, we’ve had a wonderful variety of ears this season. This little gal has Fox Terrier ears like Finn. 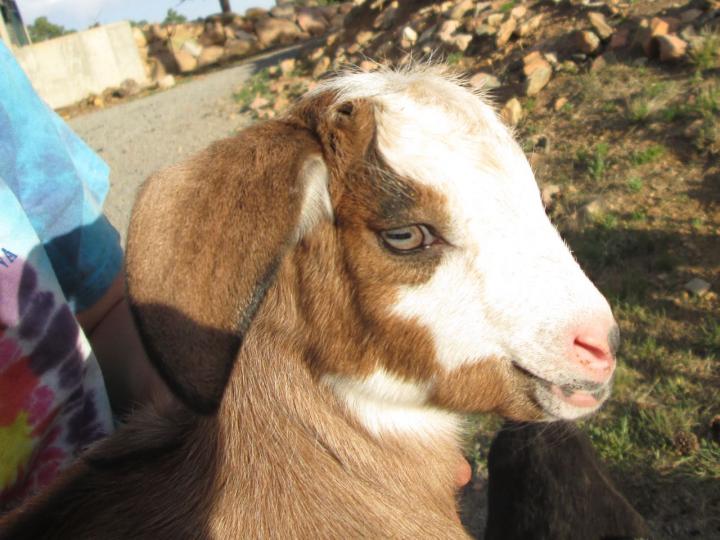 And our “Boer” baby. I’m calling her “Dear Prudence”. With all that white, this one’s going to be hard to keep clean. 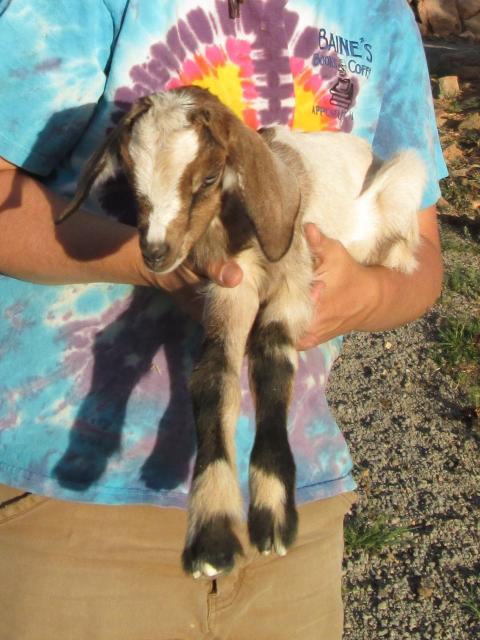 And because she’s still the most adorable goat in our herd, here’s one of Coral. She has the most innocent, disarming smile I’ve ever seen. It makes her absolutely irresistible. I can’t wait to see what her and Sox’s babies look like! She’s due in about two weeks. 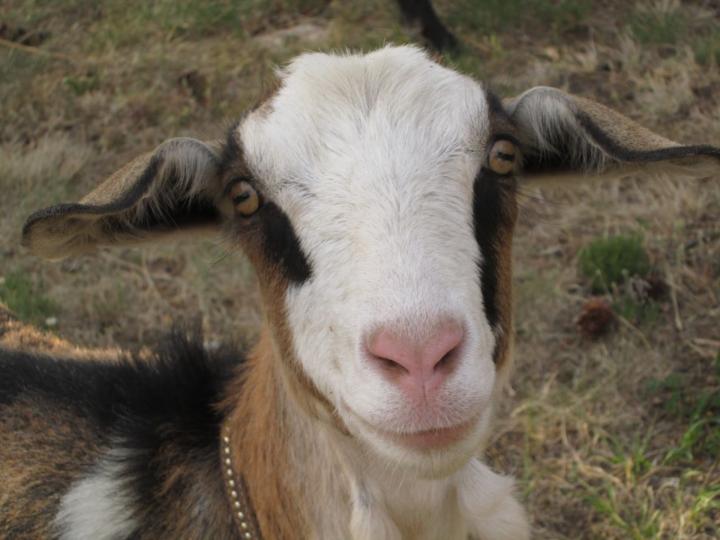 2 thoughts on “TinCup to the rescue!”