Well, she lost her breakfast, that is.

Daisy has a goofy habit of waiting to eat her breakfast until all the goats are done with theirs. I think it’s her way of showing how tough she is. I pour food for everyone, but Daisy just slinks around her bowl and won’t eat until the first goat finishes her breakfast and comes over to curiously investigate Daisy’s dish. At that point, Daisy springs over to her bowl with a snarl and a sideways snap at the offending goat, dives her head in and begins to chow down, all the while throwing malevolent glares at the goats and showing them her fangs. It’s like she’s eating her food at the goats, as if to show them… what exactly? None of them even like dog food!

But this morning Daisy’s insistence on eating her food for a caprine audience backfired. It was pretty windy this morning, but the bowl stayed grounded until just about the time the first goat came out from breakfast. Daisy ran over to her bowl and had just begun to sample its contents with a vicious snarl at Nubbin, who was casually passing by, when a blast of wind came up and blew the bowl over, scattering its contents all over the driveway. Daisy had to carefully pick the pieces out from the gravel one by one. The goats filed past without regard–Daisy was  too busy  finding and consuming her breakfast before it blew away or got trampled to scold anyone for looking at her meal. I guess she also knew that no one would be jealous of food that had to be picked up out of the dirt!

This story was originally published on 1/25/2011 on the old Pack Goat Forums, which is now defunct. I dug it out of the archives and moved it here so it does not become lost in the mists of time… enjoy!

It’s been about a year since The Hat incident, and Cuzco has long accepted that buffalo horns are a natural and acceptable occurrence in human seasonal cycles. But it wasn’t until now that we finally got a photo of this phase. Here is me in my jogging suit, which on cold afternoons includes the buffalo hat: This story was originally published on 1/12/2010 on the old Pack Goat Forums, which is now defunct. I dug it out of the archives and moved it here so it does not become lost in the mists of time… enjoy!

Emotions ran high in the Hassey Household this evening. It was a fine day today, so I put Cuzco on his tether in the vacant field next to our house so he could browse. I went late for my afternoon run, so it was getting dark when I got home and moved Cuzco into the yard. I was unhooking his chain when my goat fairly attacked me! I could hardly move him to the gate because he was on his hind legs, whirling, posturing, and waving his horn threateningly at me any time I came near him. I managed to grab him by the ear as he charged past me, and I wrestled him into the yard before he tore loose, backed up and came at me again.

And then it happened… my goat butted me! It wasn’t very hard–it didn’t hurt. But he actually backed up and charged, smacking me in the side of the leg. That’s when I decided I’d truly had it with that beast! I grabbed Cuzco by the horn and shoved his face into the dirt. Then I grabbed the scruff on his back and dug my nails in and twisted until he was forced to his knees. From there I wrestled him to the ground and sat on him. From the awkward position on his back, he lunged at me with his teeth and tried to swat me with his front hooves. We sat there for a long time before I was confident I’d won the battle. I slowly got up and Cuzco rolled over onto his side where he lay like a dead goat until I was well and truly away from him. Once he was on his feet, he looked me over briefly as though he was sizing me up, then he wisely turned and hid in his shed.

I stood there, contemplating the event and wondering what on earth could have made Cuzco so hostile. I’ll admit that once in a while he does give me a bit of guff as though testing the waters, but never has he outright attacked me, and never has it been so hard to put him in his place. As I stood there thinking, the light from the back porch fell across my shoulders, casting my shadow on the side of Cuzco’s shed. And suddenly I saw what I’d forgotten and Cuzco had observed–I was wearing the Horned Hat!

This story was originally published on 12/28/2009 on the old Pack Goat Forums, which is now defunct. I dug it out of the archives and moved it here so it does not become lost in the mists of time… enjoy!

Phil discovered one way to turn our usually mild-mannered goat into a fire-breathing monster: wear a hat with horns! Yesterday, Phil decided to wear a souvenir given to him by some friends in Buffalo, NY–a nice wooly hat with a pair of buffalo horns sprouting boldly from the top.

I was fastening Cuzco’s halter and leash for his daily walk when I felt the big goat stiffen. His gentle gaze hardened into a fixed glare as his hackles slowly rose to full height. I turned to see what he was looking at, and there was Phil, proud horns curving above his head. As I finished buckling the halter, Cuzco sprang into action. He went after Phil with all the force of his 200 lbs., standing up to his considerable height and charging, pawing, and charging again.

Cuzco was not brave enough to actually make contact with Phil, (he does know, ultimately, who is boss and that he WILL get licked if it comes to real blows), but he seemed to think that Phil’s acquisition of horns was a direct challenge to his goathood, and he wasn’t about to let the effrontery stand! We usually let Cuzco off the leash once we get to the dirt road, but not this time! As soon as we let him loose, Cuzco charged at Phil, blocking him and shoving him, and standing on his hind legs. An almost palpable wave of hostility emanated from every bristled hair on Cuzco’s body. Phil’s acquisition of horns was, in Cuzco’s mind, a grossly offensive breech of protocol and could not go unchallenged.

Needless to say, Phil had to keep Cuzco firmly leashed and strictly managed for the entire walk. Luckily Cuzco knows when he’s licked and can take defeat philosophically when he knows there is no hope of winning, so he was fairly docile and submissive once Phil had him by the halter. Even so, once we were home and we let Cuzco loose in his yard, he turned around swinging, ready to launch another assault as long as the horned hat was in view!

We’ve been taking the goats out nearly every day when the weather is nice. Today the weather is decidedly NOT nice, so I’ll just post photos from back when it was.

“Deez are muh ladeez!” says Pac-Man, as he struts along with a beautiful girl on each arm. 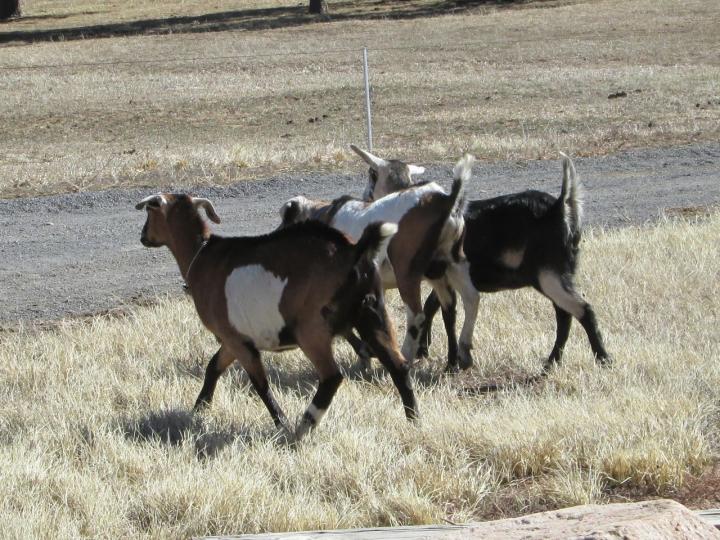 This is a frequent sight on all our walks: Lilly attacking Daisy for no reason. The naughty goat stalks the poor dog everywhere and pounces on her at any opportunity. Daisy patiently puts up with enough abuse that I’m sure she’s earned a special place in heaven already. 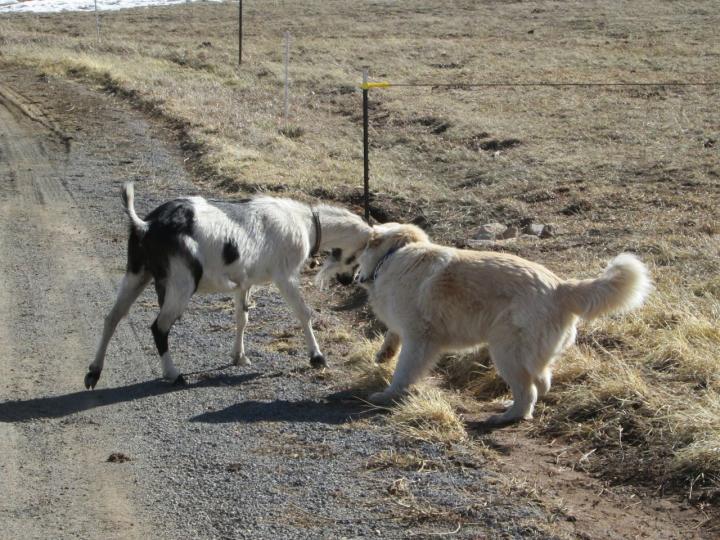 Petunia is almost as big as her mother. I love the difference in ears from behind. In fact, every one of our goats has a unique set of ears that is different from all the others. I love it! 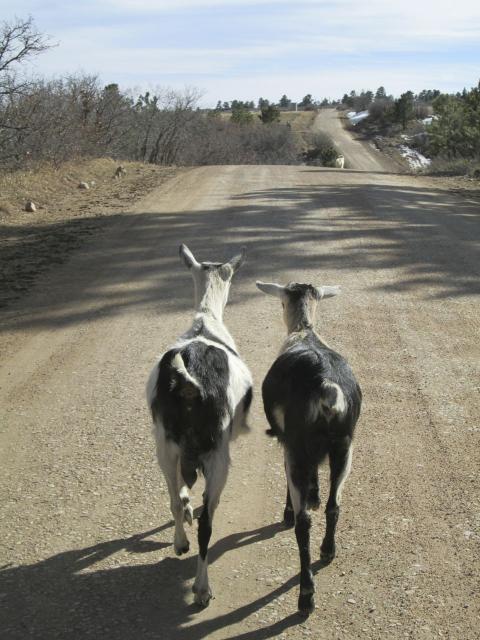 And here is our matched set–don’t they make a great couple? These two are still in love, by the way. 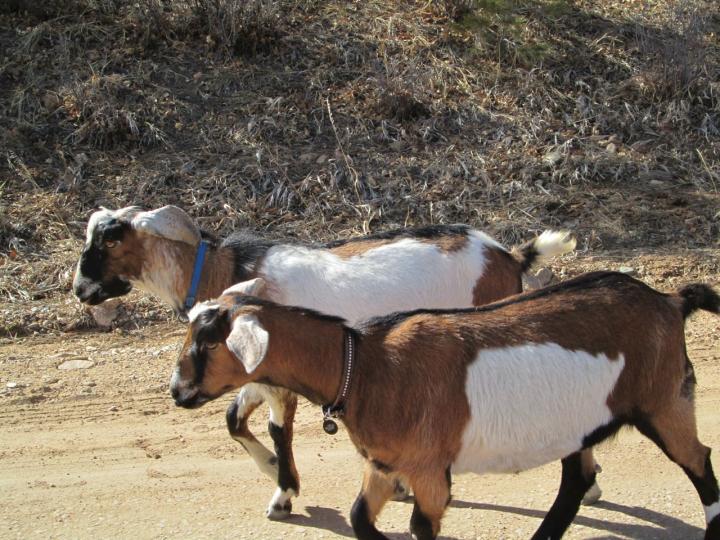 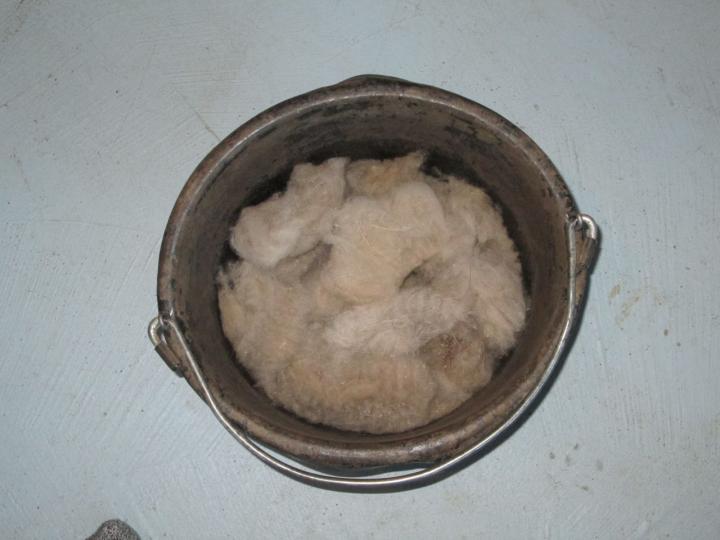 I brushed Cuzco for about ten minutes yesterday and in that short time managed to half fill this two gallon bucket. Cuzco’s coat has never been this luxurious and dandruff-free. I think it’s the oil I’ve added to his diet. I did it to help keep weight on him through the winter, but it’s done wonders for his skin and coat. I started out with vegetable oil, but that stuff makes a horrific mess of everything. So I switched to black oil sunflower seeds around Christmas. Not only are they not messy, but Cuzco goes nuts over them. The other goats took a month or so to warm up, but now everyone loves their sunflower seeds in the morning.

In other news, Lilly is starting to show. 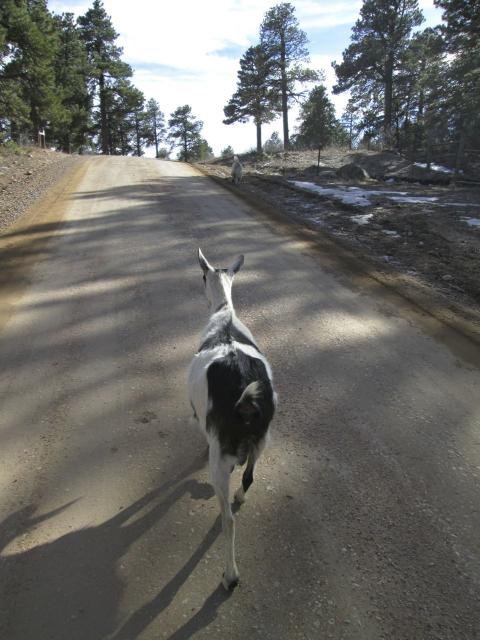