Day 4 dawned clear and cold. It would be our last day of sunshine on this trip, and the temperature was predicted to stay cold. We originally planned to hike up to Williams Lake at the base of Wheeler Peak–New Mexico’s highest mountain. But that would have required a fairly long drive with the goats in the cold, open truck bed. There was a chance of warmer temperatures on Wednesday, so we put off the Williams Lake hike and I did a little research to find a better cold weather trail closer to Taos. I discovered Devisadero Loop Trail on the south side of Taos (where the sunshine was happening that day), and reviews said most of the trail was on the sunny side of the mountain. This sounded like a win to me! I love loop trails, and this one was about 6 miles long–perfect for two people still recovering from Friday’s hike to Wheeler, and from the previous day’s steep terrain.

The trail skirted the peak of a mountain overlooking Taos and offered stunning views of the city and surrounding mountains along most of the way. The reviews had been correct about the sunshine. Despite the cold temperatures, the sun hit this mountainside hard enough in the morning that I was able to hike in a T-shirt for the first part of the day. 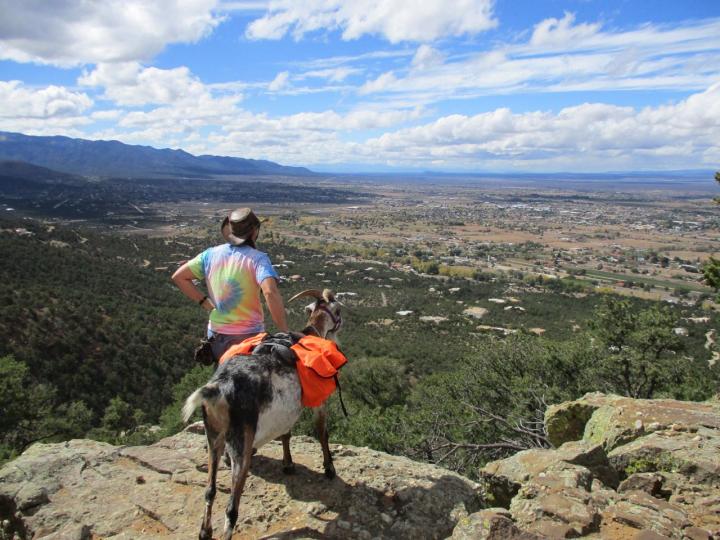 Sputnik’s fluffy, warm hindquarters made a great resting spot. There was even a good pad of fat on that broad back of his! 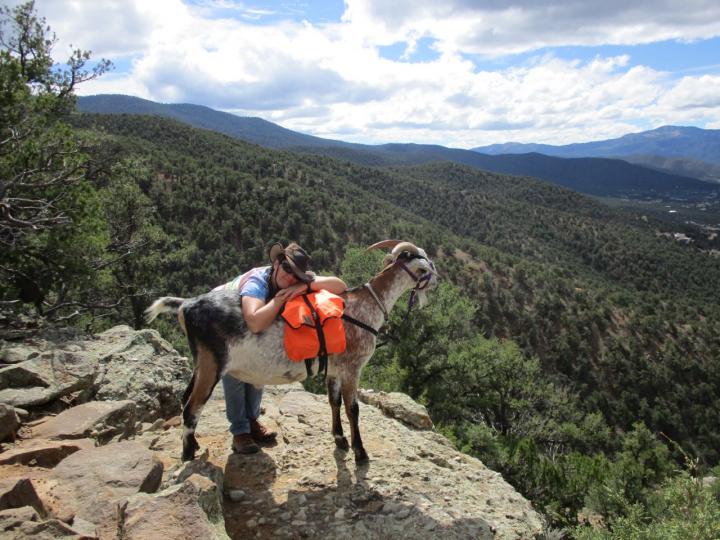 Sometimes a bit of vandalism adds character to a place. 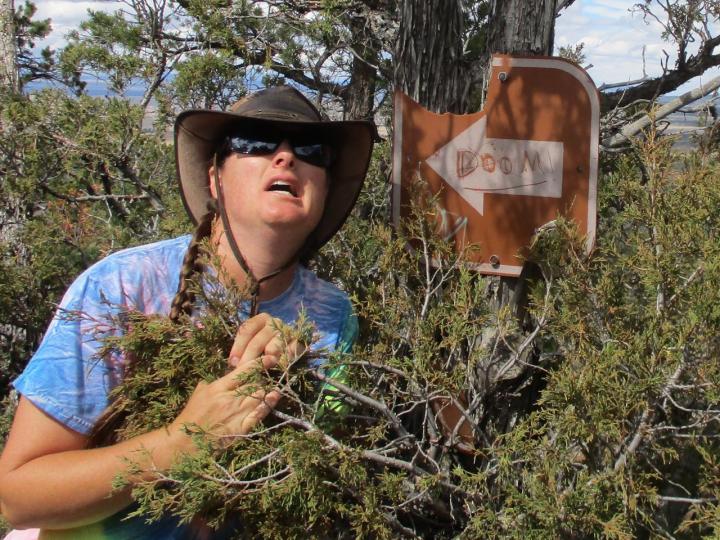 We were greeted by a series of three stone thrones at the top of the mountain. It was a perfect place to eat lunch, but I had to tie up the goats because people with dogs kept coming over the crest and we didn’t want any accidents or surprises. 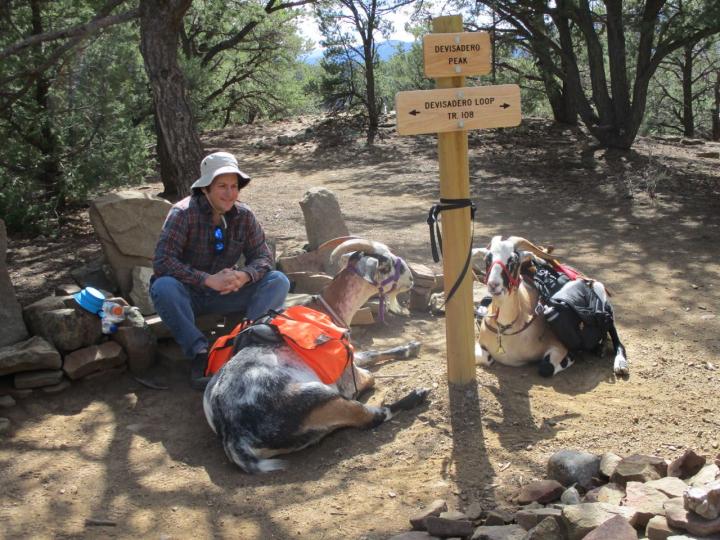 According to the man who took this photo for us, the thrones were much bigger and more impressive until the Forest Service decided to intervene. In the name of “Leave No Trace”, the government decided to tear down the thrones, monuments, and other rock art at the top of the mountain. Naturally, the citizens came and put it back up, but apparently it does not live up to its former glory. The local who took the photo didn’t think much of the Forest Service any more. 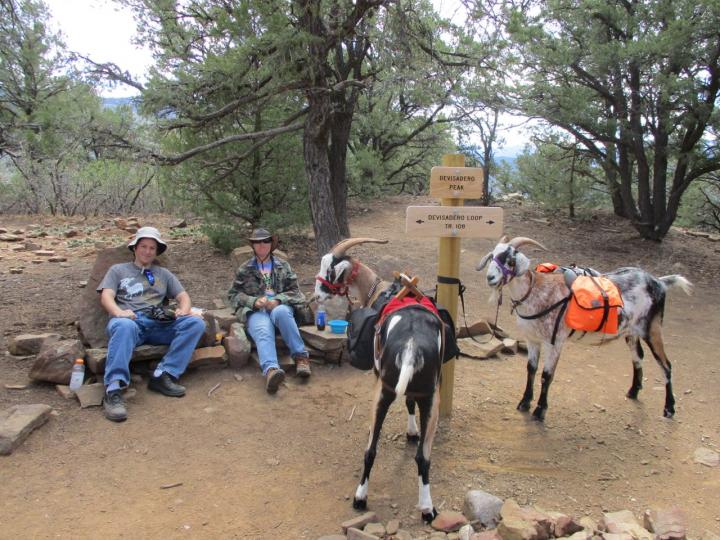 We had equally good views on the hike back down. 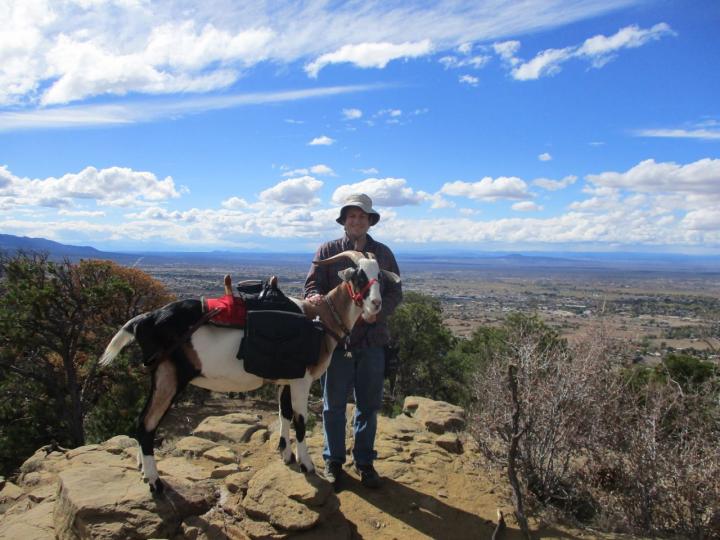 I just love the shape of Finn’s horns.

We still had daylight left after the Devisadero Loop, and several trails started from the same parking area. So we explored the river bottom across the road from the Devisadero Loop for a while. We didn’t go far because we only wanted to see the leaves. The cottonwoods and willows were at peak color and their leaves carpeted the trail. Unfortunately the light was a little off and none of my photos came out very well, but it was a particularly relaxing and enjoyable little jaunt through golden, sun-dappled woods. 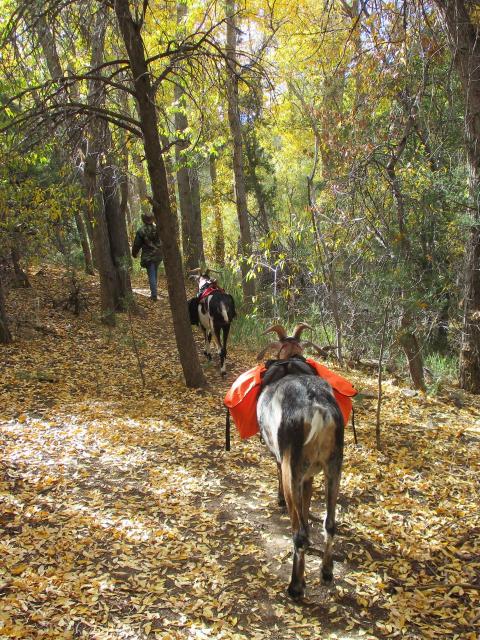 We finished hiking in mid-afternoon and there was one more thing I wanted to see. I’d read about the broken-down Ponce de Leon hot springs south of Taos and I wanted to see them. Reviews were mixed. One said the trail to it was closed. Another said the springs were silted in and choked with cattails and probably hadn’t been used in years. But other reviews said it was a wonderful, secluded little spot and showed photos of beautiful, clear pools–the remains of what once was a small resort built in the 1920’s and abandoned in the 1960’s.

It took a bit of looking, but we found a rough parking lot at the top of a narrow dirt road. It was full of broken glass and the road across the way was barred with a metal gate. Signs next to the gate indicated that the trail and springs were closed to vehicle traffic and were being managed by the Taos Pueblo Indian tribe. The signs were all shot up. It was an easy mile hike down to the springs and we had to go through a couple of gates.

When we got there we were greeted by a large silted-in pool filled with cattails just like the one-star review stated. No swimming to be done here! Too bad. It looked like a really nice pool at one time. 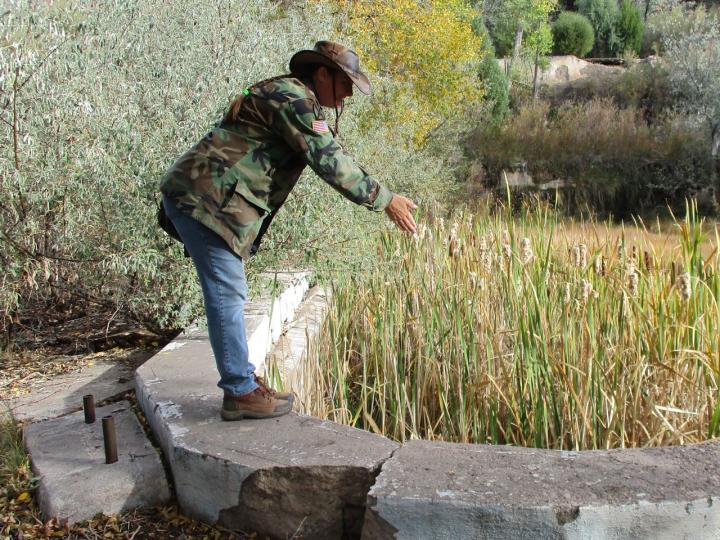 But a short hike up the hill and around some willows revealed the hidden spring. Apparently our one-star reviewer was not a very ambitious explorer. I dipped a finger in the water, expecting it to be too cool to tempt us in on such a cold day. 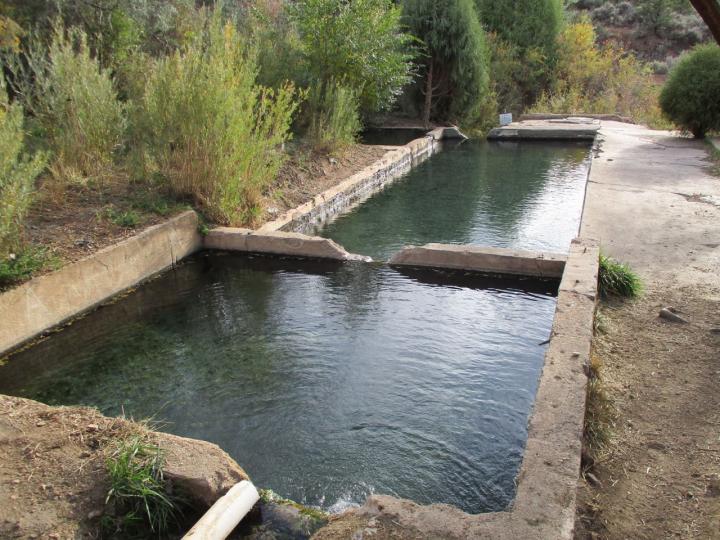 But I was pleasantly surprised! The water was not hot, but it felt wonderfully warm compared to the chilly air. The sun came from behind a cloud, showing wisps of steam hovering over the surface. Phil and I changed into our swimsuits and jumped in. It was not deep–only about 3 feet–but it was a delicious temperature on a 50-degree afternoon. 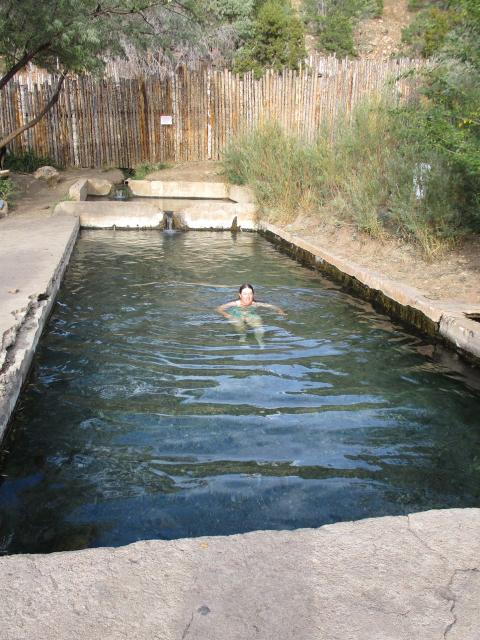 The goats had carried our swimsuits and towels down for us, but they had no desire to try the water for themselves (and it would have been bad manners to allow goats in the pool even if they wanted a dip). I tied them to a willow tree along the bank and they kept themselves very amused by trimming the foliage. 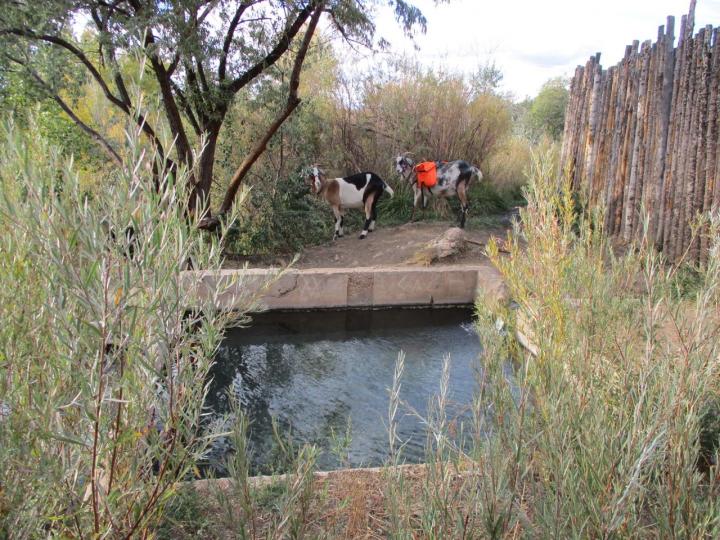 The water was some of the clearest I have ever seen. There was no sulfur smell–only pure, delicious, crystal-clear spring water running over a sand and gravel bottom through which you could feel the heat radiating up between your toes. It was good enough to drink, and Phil and I both had a sip from the cataract that tumbled into the pool. 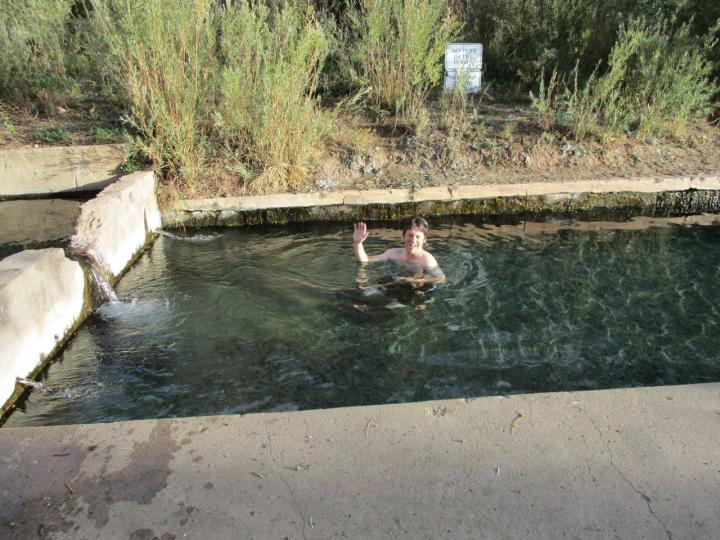 Getting in was wonderful, but getting out was cold! We waited until the sun peeked from behind the clouds for a few minutes, and then hurried over to our towels and into our dry clothes. Finn got to carry my wet swimsuit back to the truck. I’m glad no one else was at the springs because I really didn’t want to hike back in my wet bathing suit, and there was nowhere convenient to change clothes except right by the side of the pool. I’m just not one of those “clothing optional” people even though this is a “clothing optional” pool. 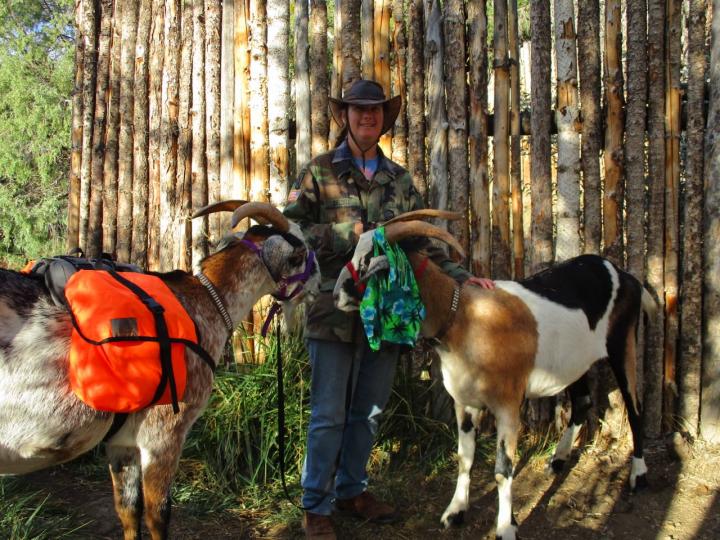 I hope Ponce de Leon Springs is never “rediscovered” because it’s a gorgeous little gem just as it is. It provided the perfect end to a wonderful day.