We had a “baby goat in the house” party this afternoon! At lunch break, Phil came downstairs and told me he’d had a hard morning at work. I knew just the thing to perk him up. After cleaning her muddy feet, I invited Coral into the house! 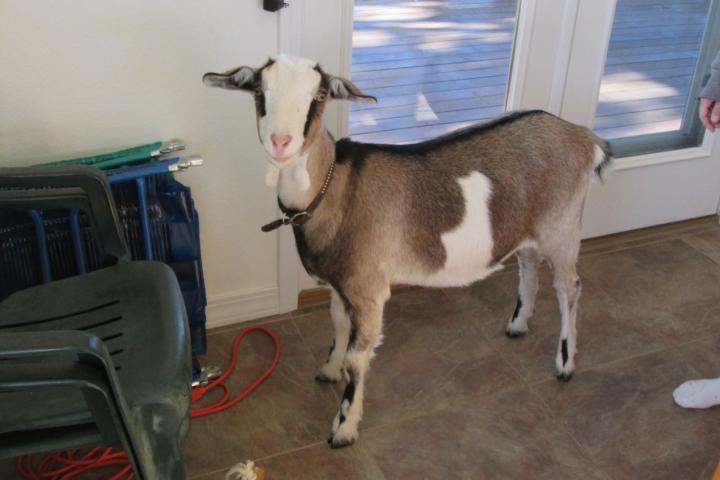 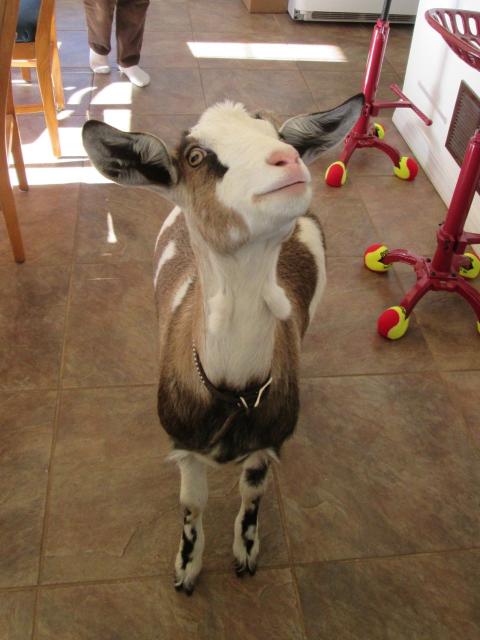 The first thing she noticed was the apples on the kitchen counter. Yum! 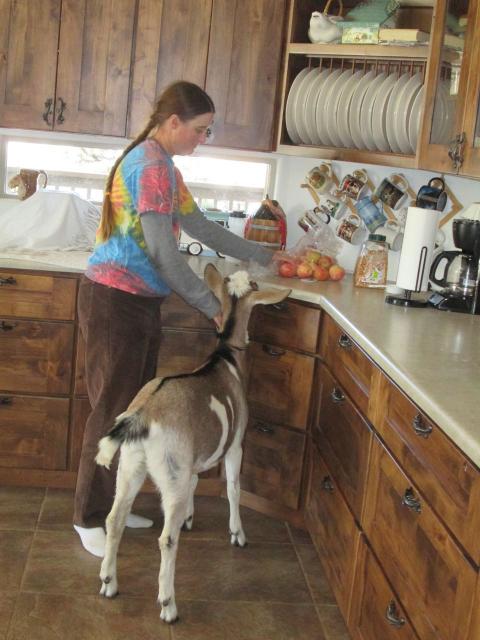 So how could we resist giving her one? 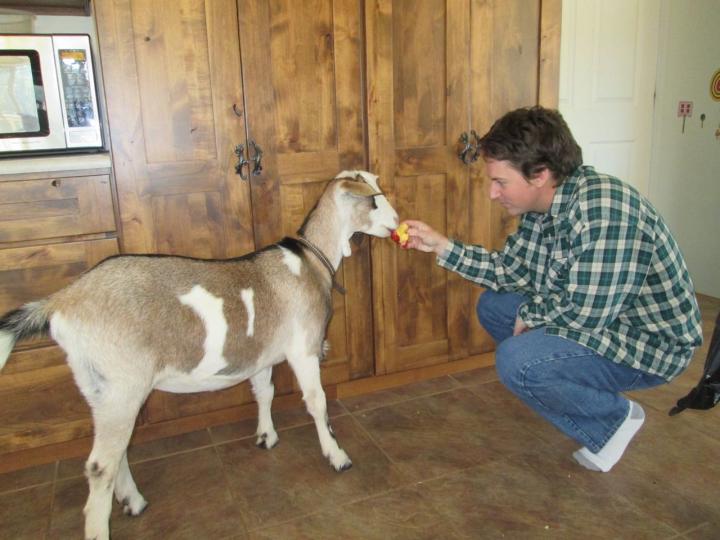 Oops… it rolled under the cabinet. Phil will fetch it. 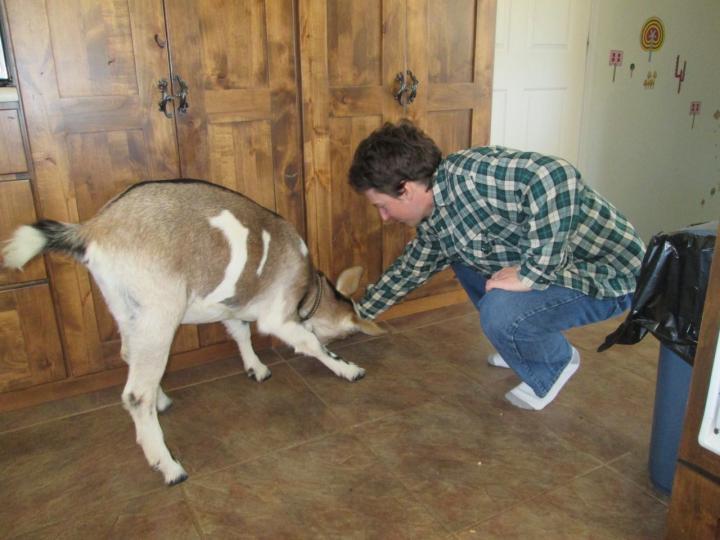 Next she tried to eat the imitation jungle that adorns our Korean War bomb tail. Sorry Coral–no plastic for goats! 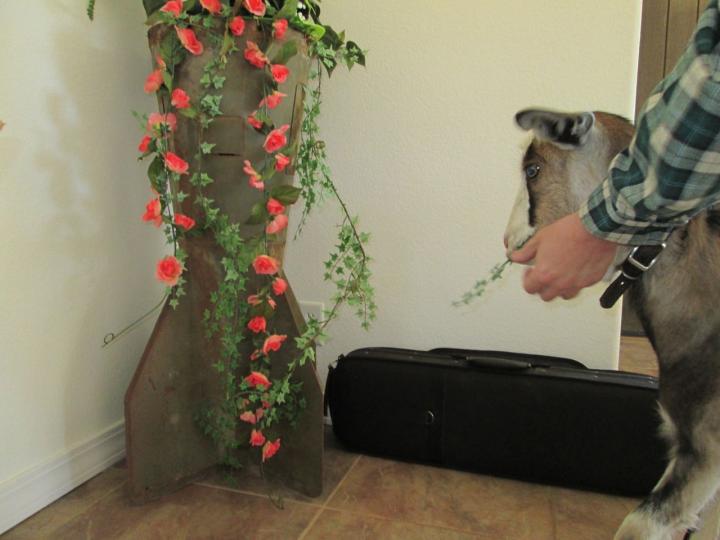 She was quite puzzled by our carpet. She kept sniffing and nibbling at it like she thought maybe it was grass, but she also knew there was something not quite right about it. 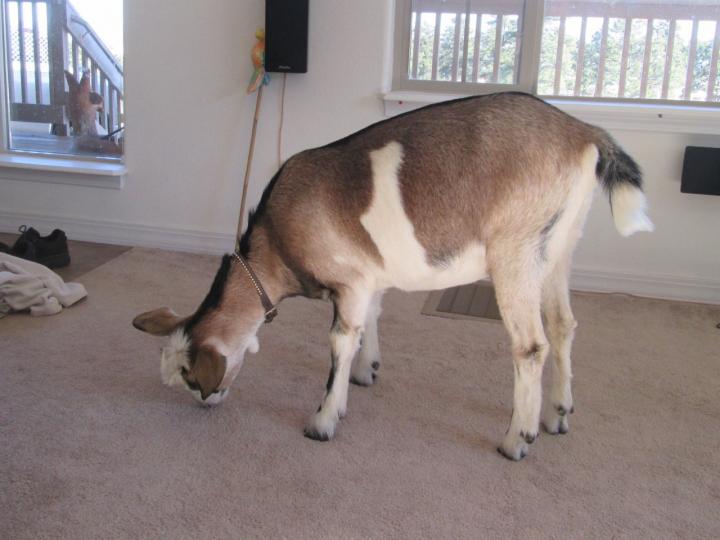 Next Coral asked if she could play with the X-Box Kinect. 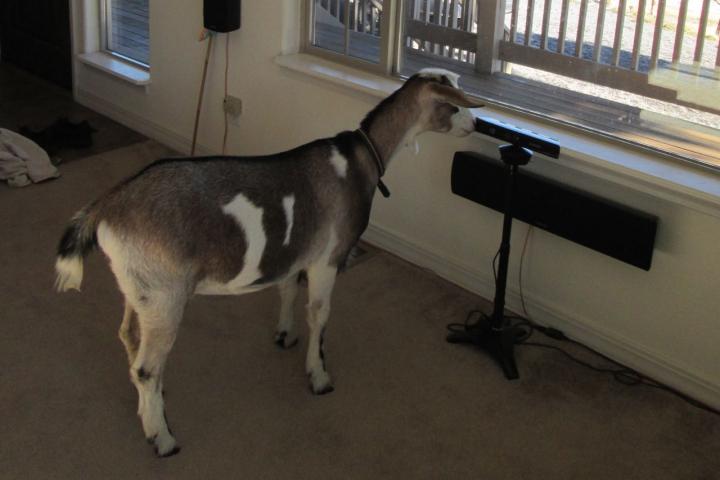 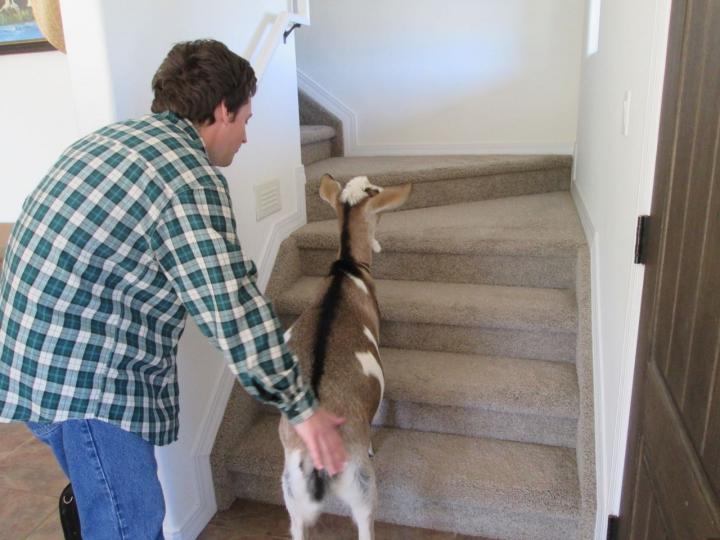 Or maybe downstairs to the basement? 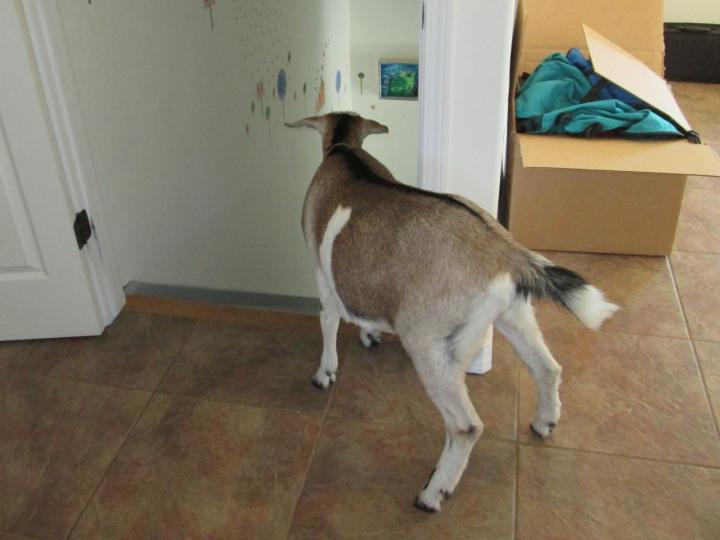 Coral seemed very intrigued by the sound coming up the stairs from the blower on our wood stove. 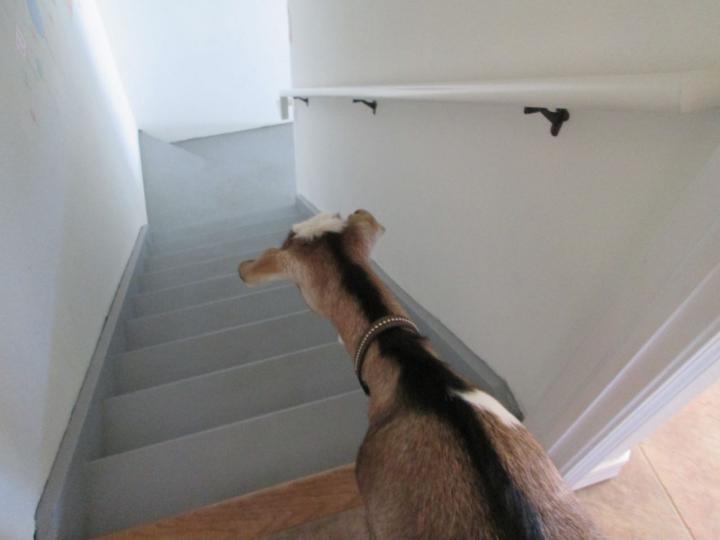 “How about you come give me a hug!” 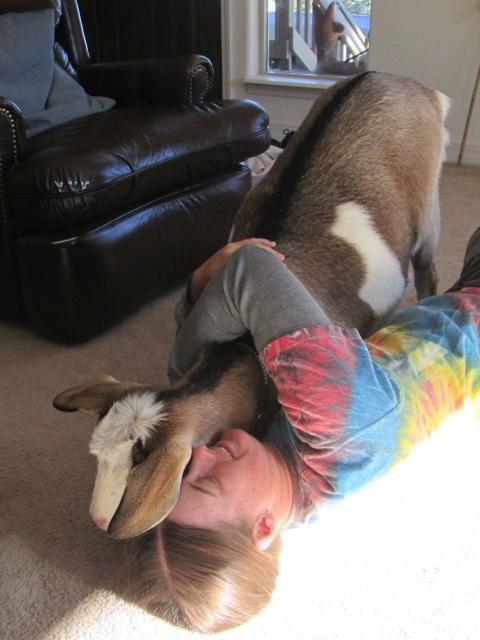 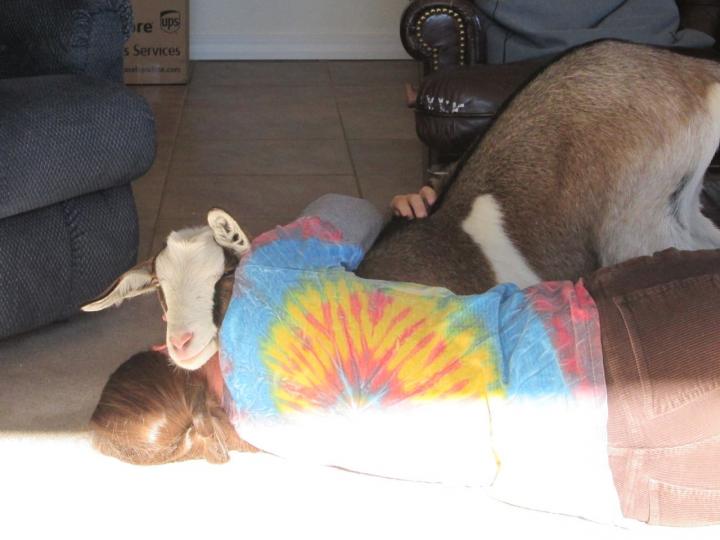 What an adorable little face! I couldn’t help falling in love with this baby goatie. I’m so glad we kept her! 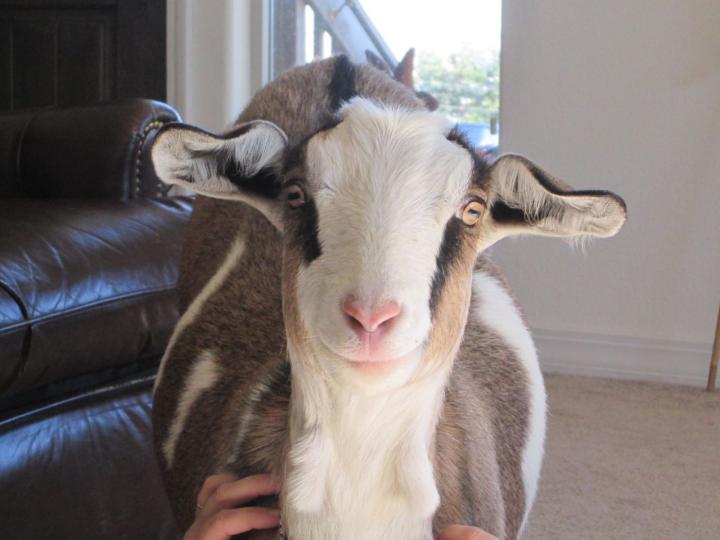 Phil and I attended Rye “Halloween Town” again this year but left the goat-drawn hearse at home this time. We like to mix things up, so a 9-foot inflatable dragon was our showpiece this year. I originally planned to bring the cart and give rides to kids, but we had so much stuff in our truck already that I decided not to bring one more thing. I also planned to bring Tigerlily as my wizard sidekick (she almost looks like a unicorn), but Phil was worried that she would mess up the truck on the way to town and we wanted a nice clean pickup bed to put the dragon in. Sputnik is the only goat who reliably controls himself while riding in the truck, so Sputnik came to Halloween Town with us.

I wrapped Sputnik’s horns in “lightning” vetwrap but he wore no other costume. He did all his dress-up duty for the year at State Fair when I made him wear a humiliating chicken suit. I was a wizard. I chose this because it was a very cold evening and I needed a very warm costume. I stayed nice and toasty. 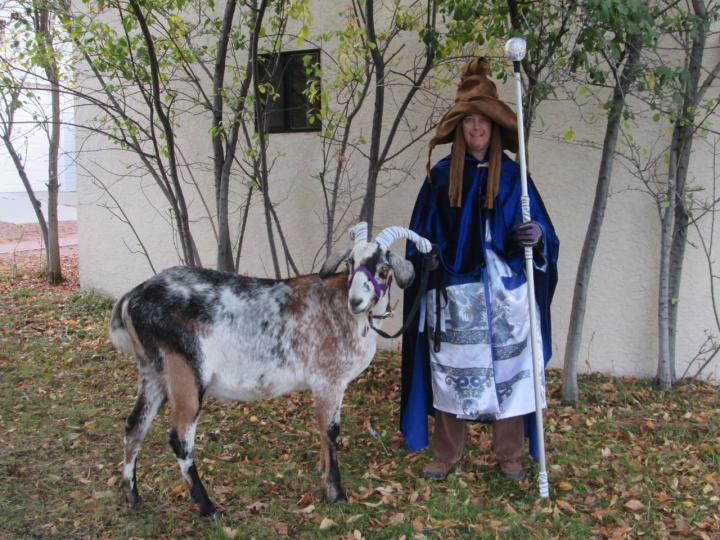 Phil was an executioner. He was warm except for his hands. He forgot to bring gloves. The kids were terrified of this costume! Many of them would start toward the candy and then freeze in their tracks and just stare at Phil with their mouths open until he spoke to them. 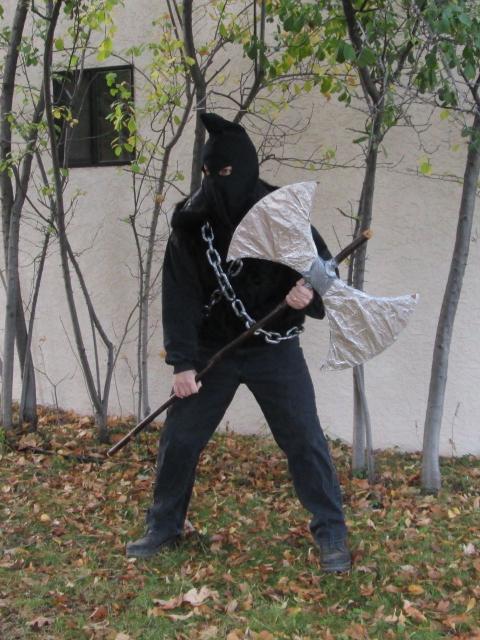 I thought the truck looked pretty awesome. The lighted skeleton that we made last year to “drive” our hearse looked great laying at the feet of our vicious man-eating dragon. We used the coffin from last year’s hearse as our candy holder. Green and purple lights adorned the coffin inside and out, and another skeleton guarded the candy. Some of the kids were just as afraid to take candy out of the coffin as they were to approach Phil and the fire breathing dragon! 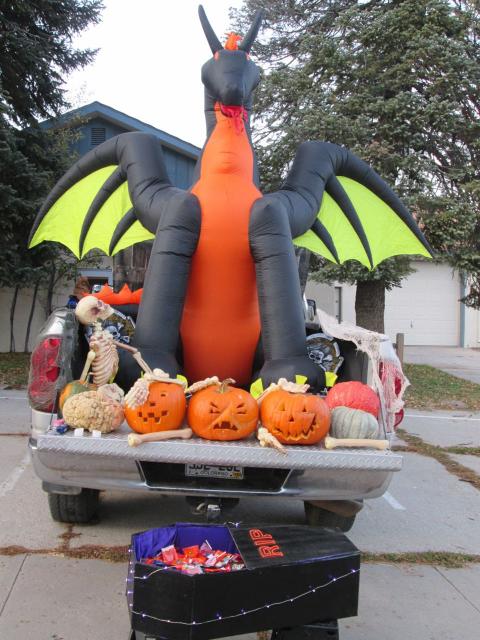 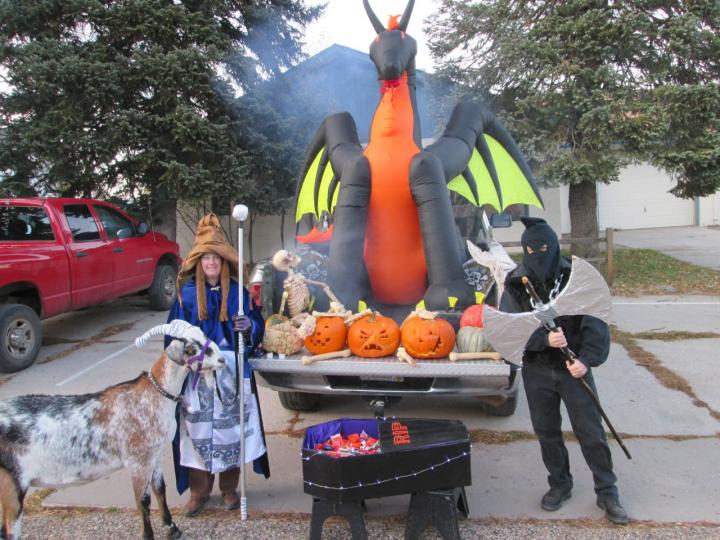 We had some really fun pumpkins this year. We went to a corn maze and pumpkin patch on Sunday with my family and the specialty pumpkins were free. We picked out a few gnarly ones, including a ghoulish green one, a pumpkin that looked like it had cancer, one that had green warts, and a “red warty thing” pumpkin (yes, that’s its official name!). We also carved some normal pumpkins into jack o’ lanterns, and they looked pretty cool once darkness fell. 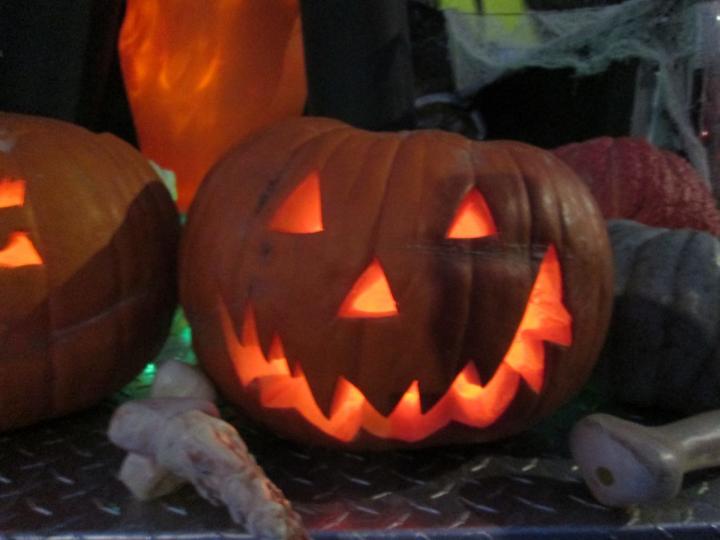 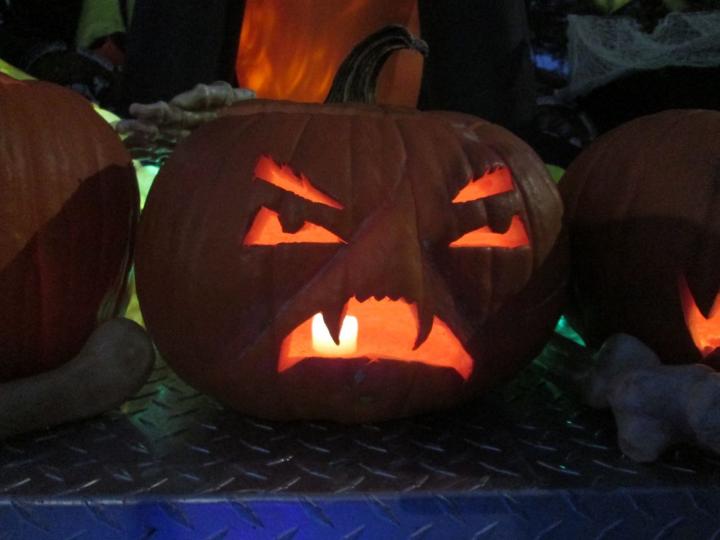 The skeleton got creepy in the dark too. We had our fog machine going for an eerie effect. 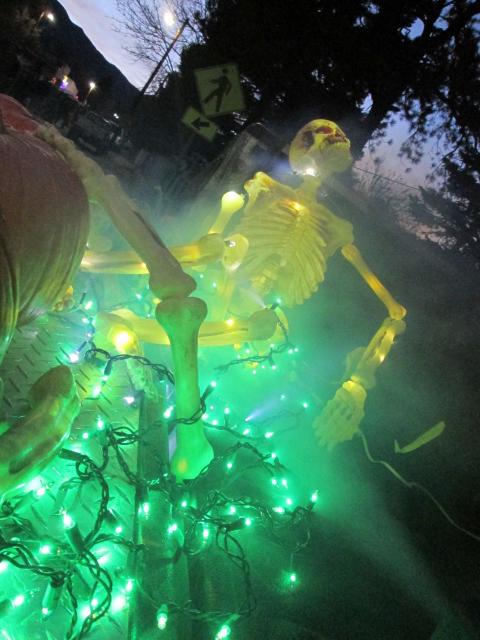 Our truck after dark. 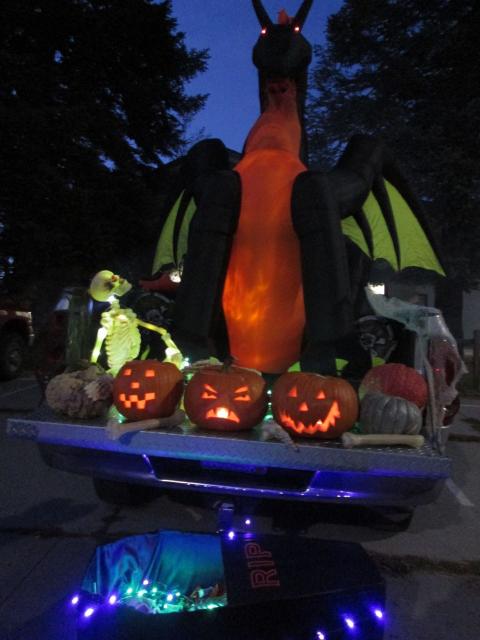 Sputnik did not have a very good time, unfortunately. He did ok at first, but early in the evening he got mobbed by about six kids at once and he freaked out. I took him for a walk in some out-of-the way places, but he never really settled down. He’s used to having Finn by his side and he reverted to his younger, skittish self. He didn’t want to be touched at all but was overly eager to perform tricks and get treats. He’s usually not rude about treats, but he was last night, especially after I introduced him to the candy! He was ok with most of the costumes, but one full-body T-Rex suit freaked him out. He got pretty loud for a while but since it amused the crowd I guess it was ok. Someone said they thought the dragon was roaring, but it was just Sputnik hollering from behind the truck. On the plus side, he never messed the sidewalk but politely did his business in the grass.