I let everyone out into the Wide World today, and Jezebel immediately took her family and hid behind the house. I guess she’s doesn’t like the company we keep around here! The kids learned how to climb stairs! 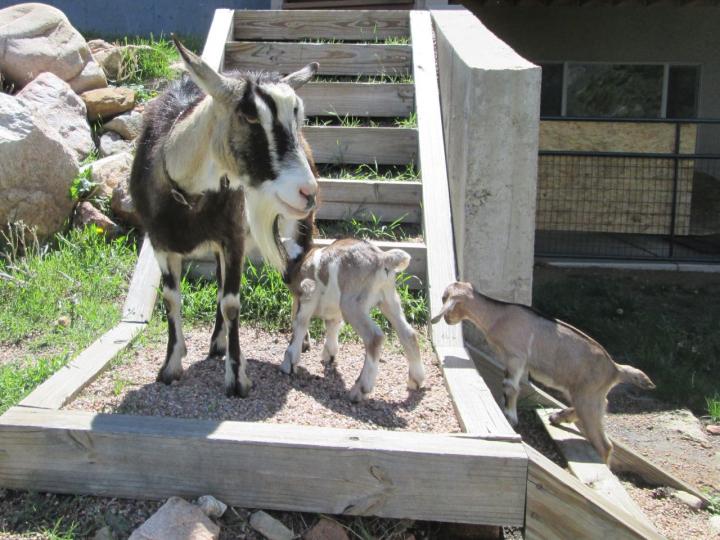 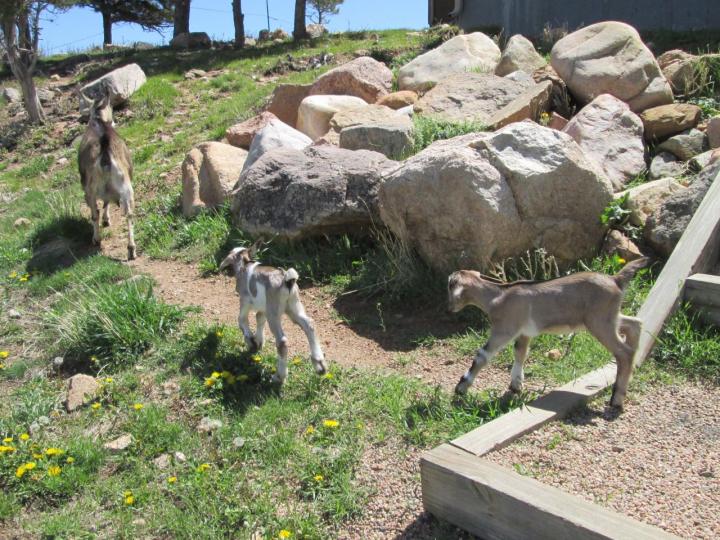 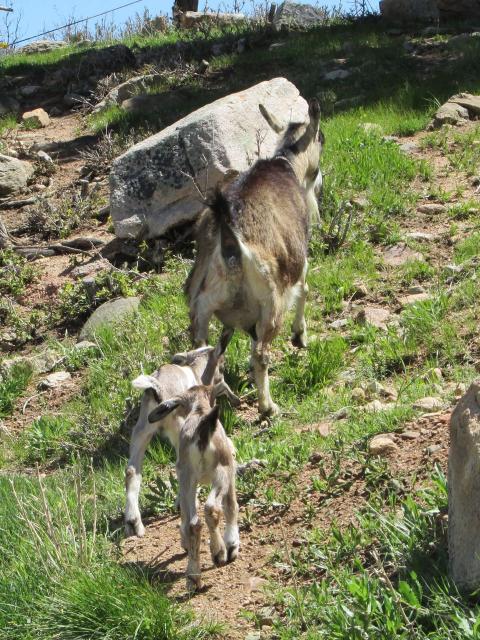 It was cool and shady behind the house, but perhaps a bit too cool and shady. The ground was still quite muddy from the previous rains, and I was afraid the kids would get damp and cold. 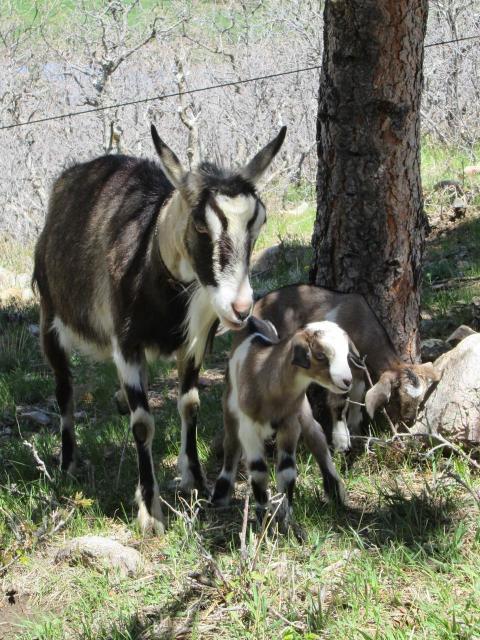 So I brought them back to the sunny side of the house where Jezebel was treated to apple cores and oranges. I guess she thought the move was worth it because she and her kids stayed there all day. In fact, Delilah left her kids with Jezebel and went off with the herd to graze. So much for motherly responsibilities! Jezebel did her duty and stayed with all four, never venturing out to eat anything herself, so I’m glad she at least got the fruit. I’m proud of Jezebel. She’s overprotective of her own kids as usual, but she’s changed this year in that she’s not being mean to Delilah’s babies. Jezebel has been known for being unreasonably mean to babies that weren’t hers in the past. 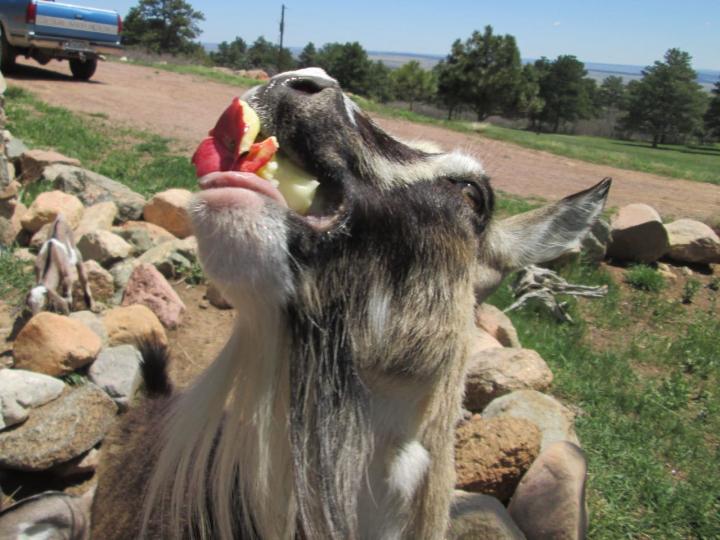 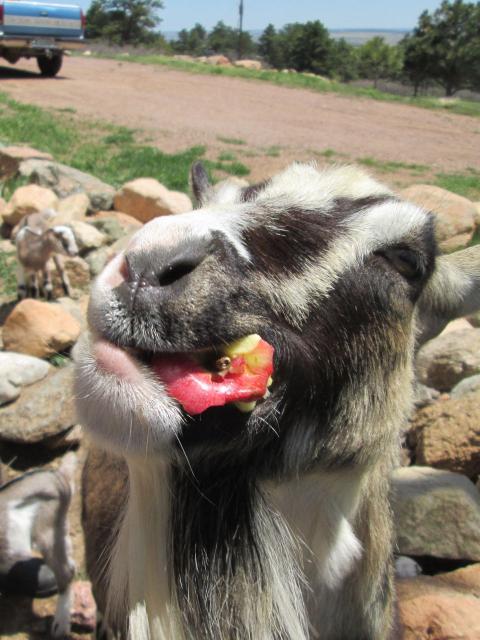 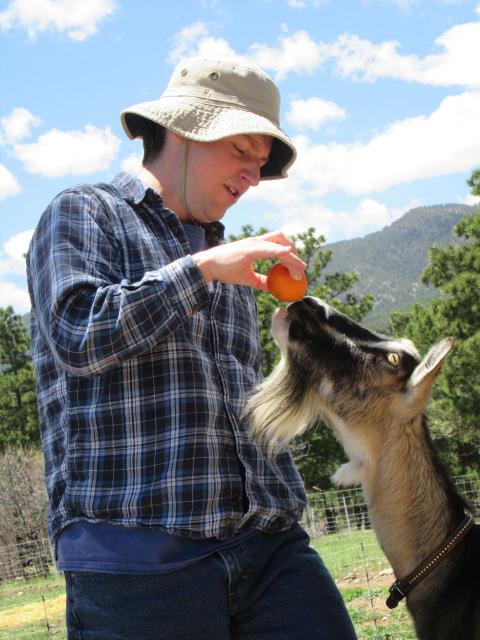 Jezebel likes giving Sox baths. Little Sox had trouble walking that first day when his foot kept collapsing forward, but the splint did it’s job and we were able to take it off that evening. Although I had not wrapped it tightly, it had still lost a little circulation, and Sox looked very funny when his “asleep” foot started tingling with extra blood flow! He was swatting and goose-stepping that one one leg for a few minutes, but we could see that he was much improved. Sox is walking perfectly today! 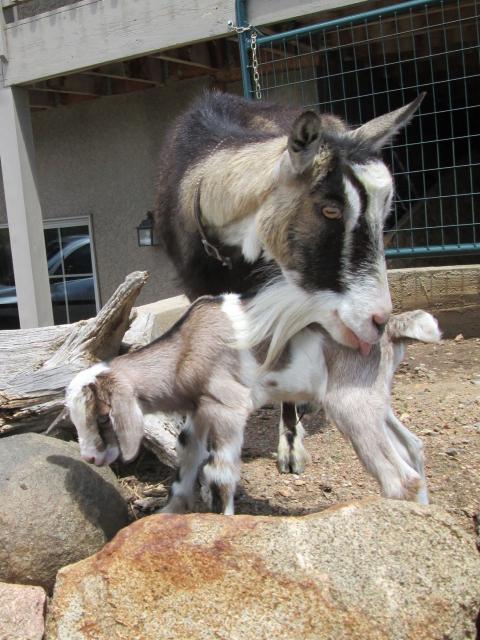 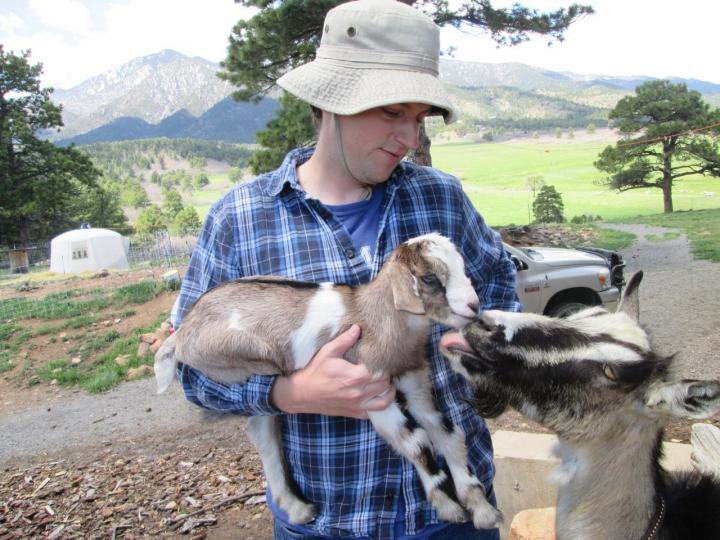 I love the spot Sanibel picked to take a nap! With her leg draped over the wood like that, it almost looks like I posed her, but she posed all by herself for these pictures. 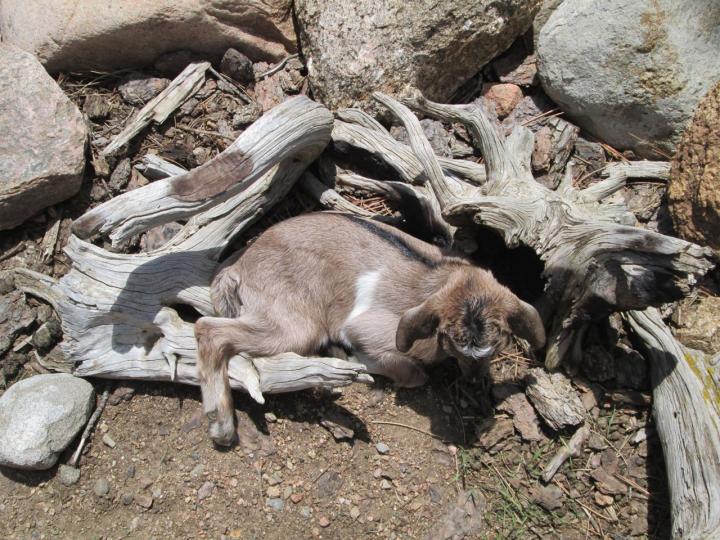 The mamas do NOT like the dogs and start growling and snorting any time the dogs come near, but the dogs are very interested in the kids. Pluto is normally a very rowdy, rambunctious dog, but when he approaches the kids he calms right down and walks very slowly around them, sniffing and licking gently so as not to startle them. If a kid gets scared and jumps away, Pluto retreats with an apologetic wag. 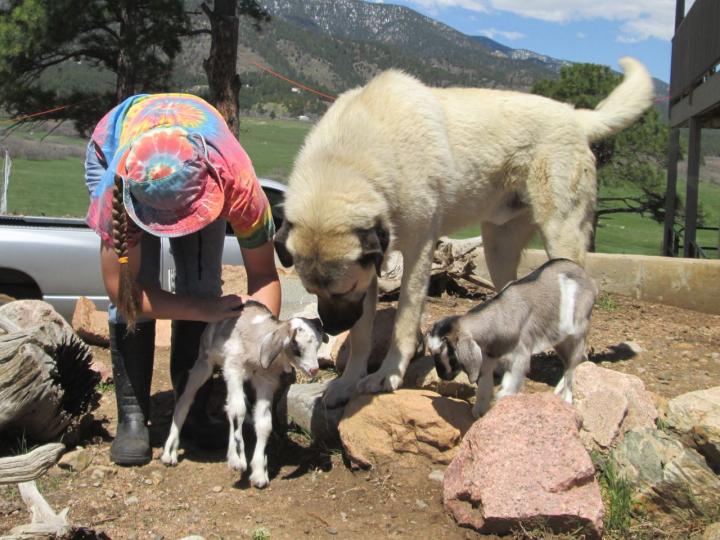 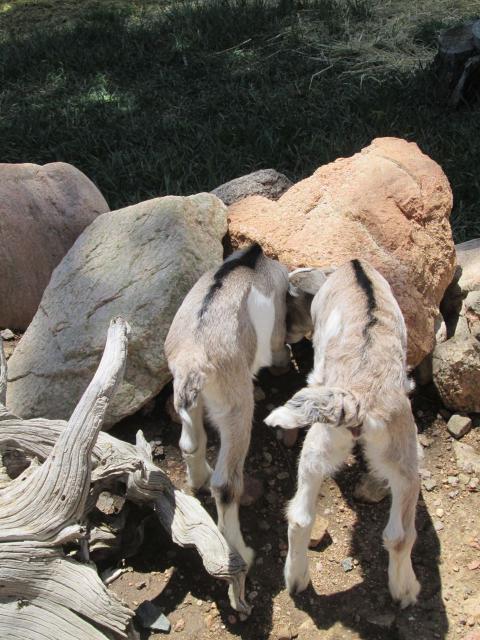 Can I reach under your belly? 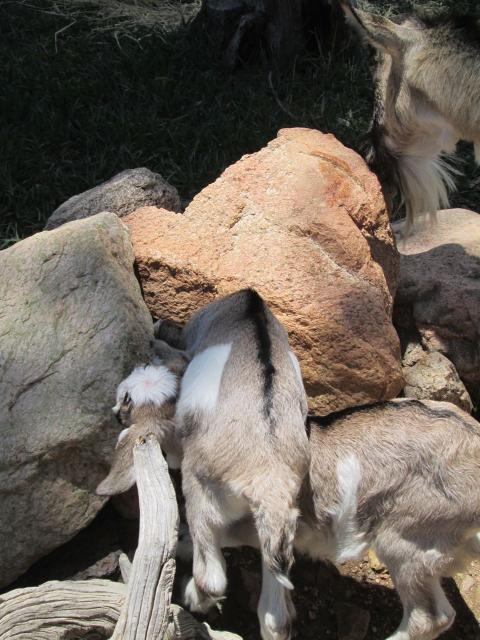 I guess this crack made a cozy niche to take a nap because Coral and Westing wedged themselves right into it and stayed that way for most of the afternoon. 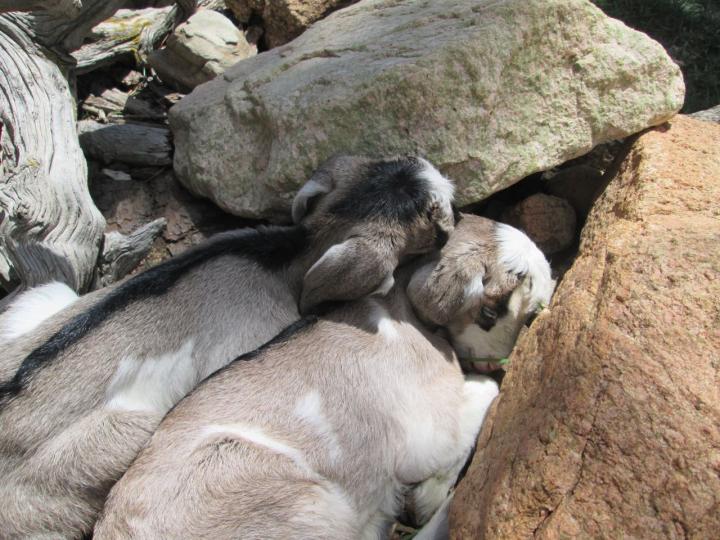 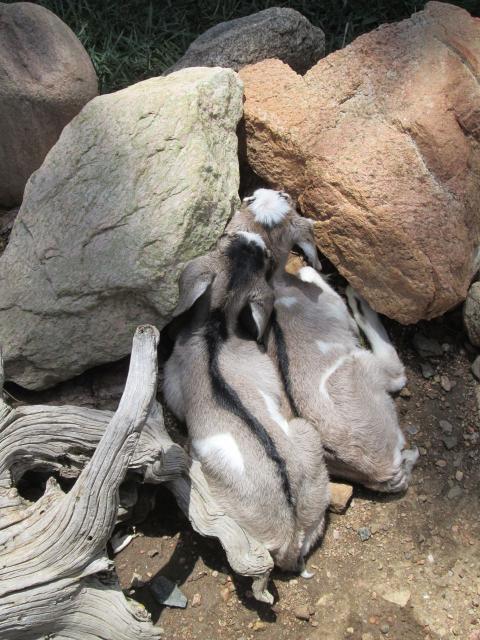 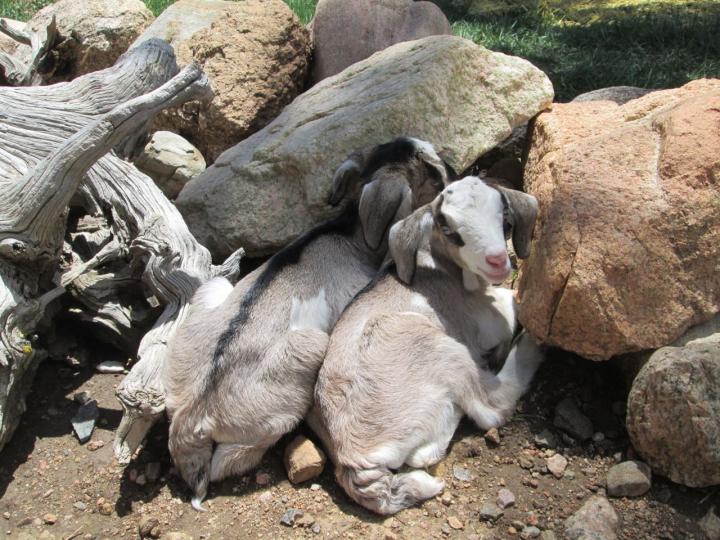 1 thought on “Adventures in Babysitting”