Sarge, or “the little peanut” as we’ve been calling him, needed help on our walks for the first few days. His mother seemed determined to start bringing him as soon as possible, and he did his very best to keep up, but he’s very tiny and kept getting trampled by bigger and faster goats. So we often carried him during the first week. 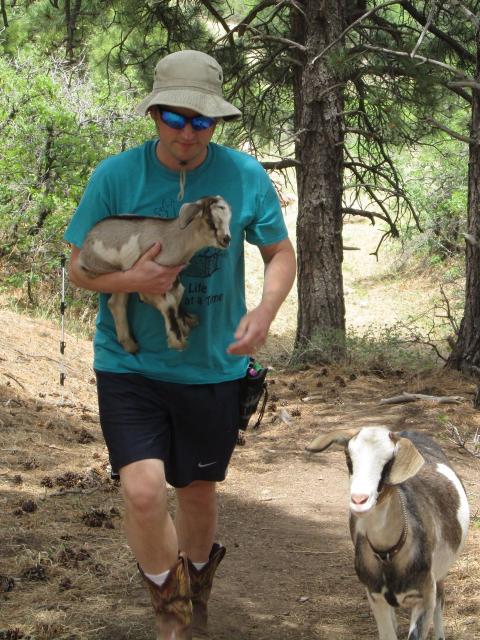 These two are the cutest together. Coral is still very much a baby herself, and motherhood has done little to “mature” her as it usually does with most goats. 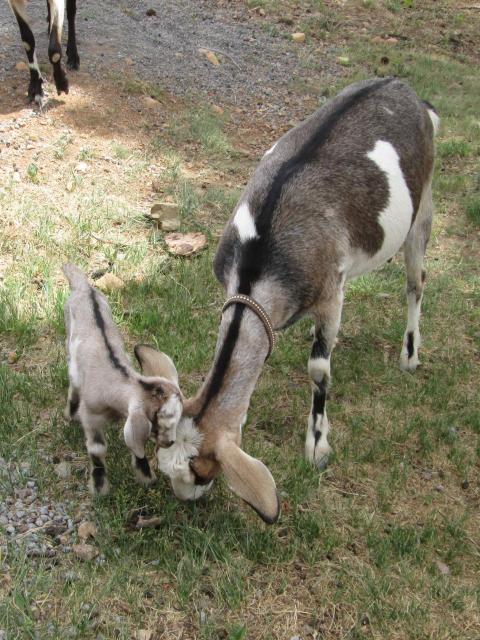 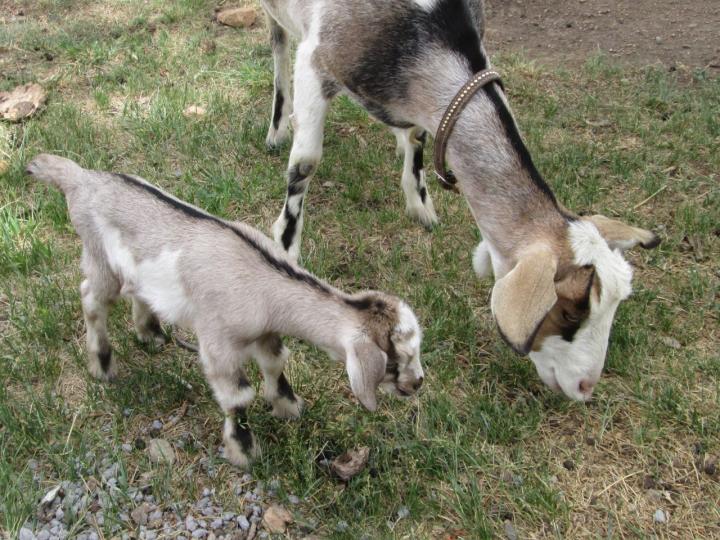 Look at that little pink tongue! 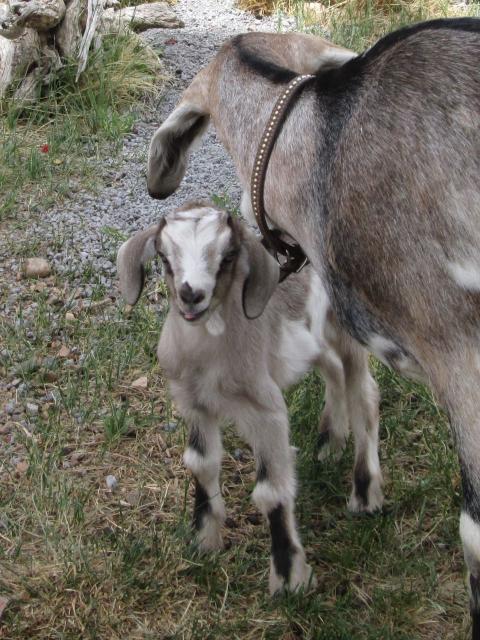 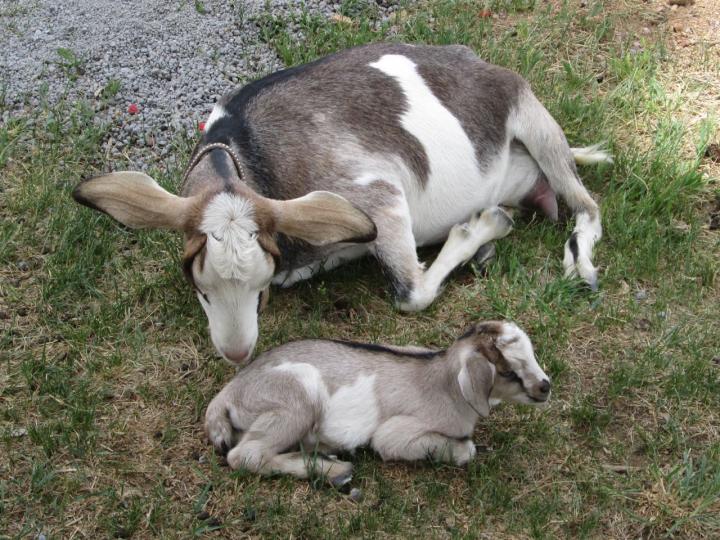 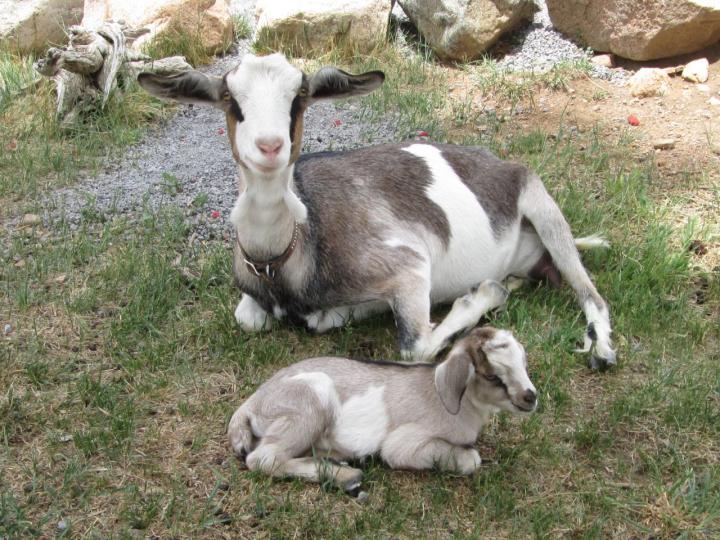 And let’s not forget the “big kids”! TinCup’s and Nauti’s kids hang out in a group, and their mamas often take turns babysitting while the other goes out to graze. The kids are getting old enough to stay with the herd most of the time now, but I still occasionally see the four of them conked out under a tree with one mama grazing alone nearby. 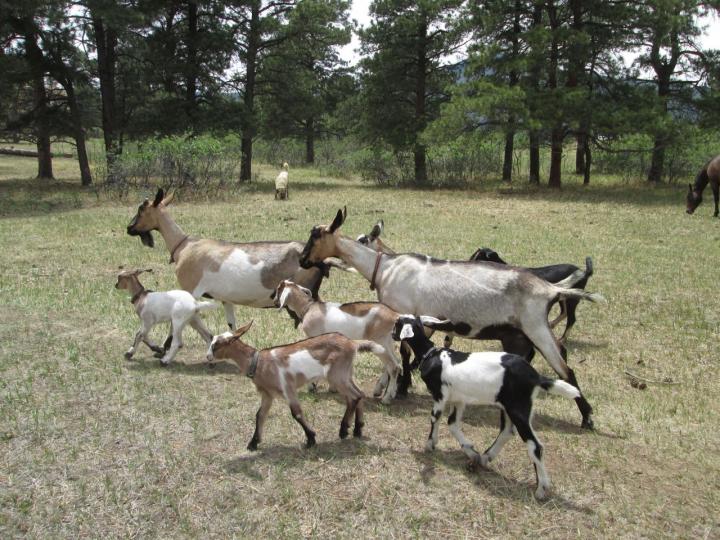 Wild Honey Pie’s pattern reminds me of the colors we commonly see on Nigerian Dwarfs, but that seldom present on a large breed goat. I love it! 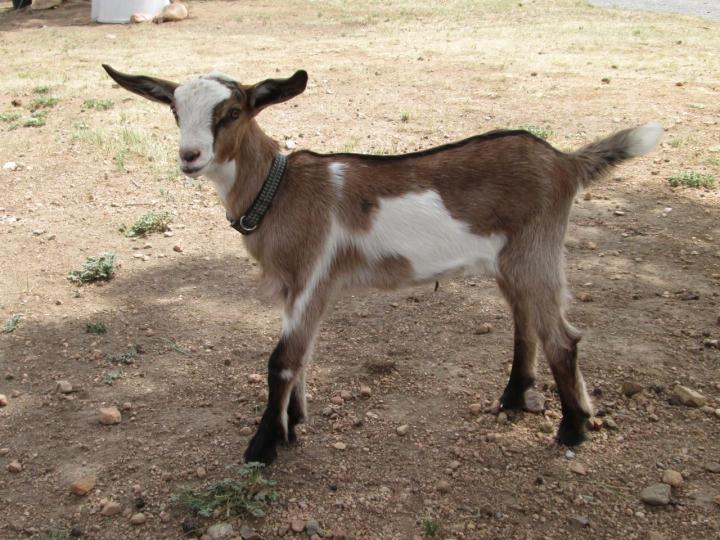 What a cute face! 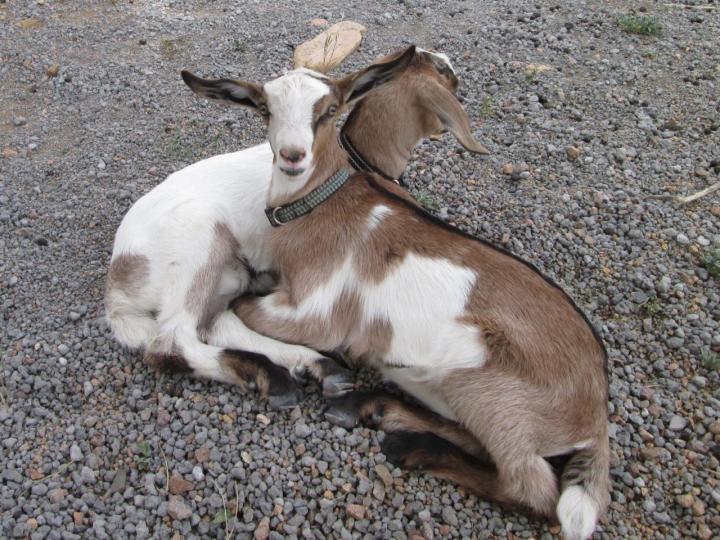 And Honey Pie’s sister Prudence looks like a little Boer in her coloring. If my neighbor still had his herd, and if I hadn’t personally overseen TinCup’s date with Rocky, I’d be concerned that there’d been some mistake. But no, my neighbor hasn’t had any Boers for going on three years now so there is no question about this girl’s parentage. But I like to tease her about being the “red-headed stepchild”. 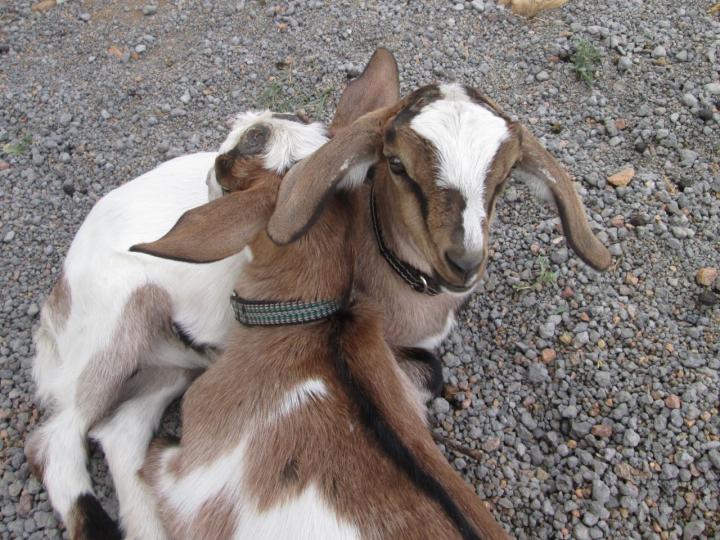 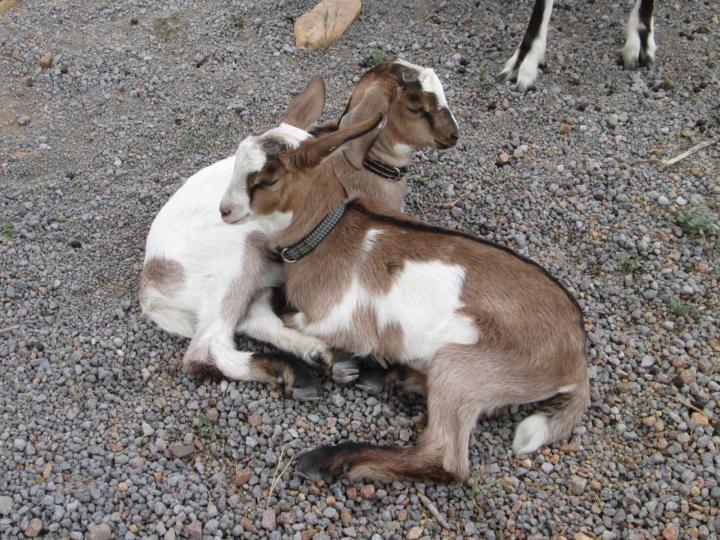 Tired mama with her cuddling babies. 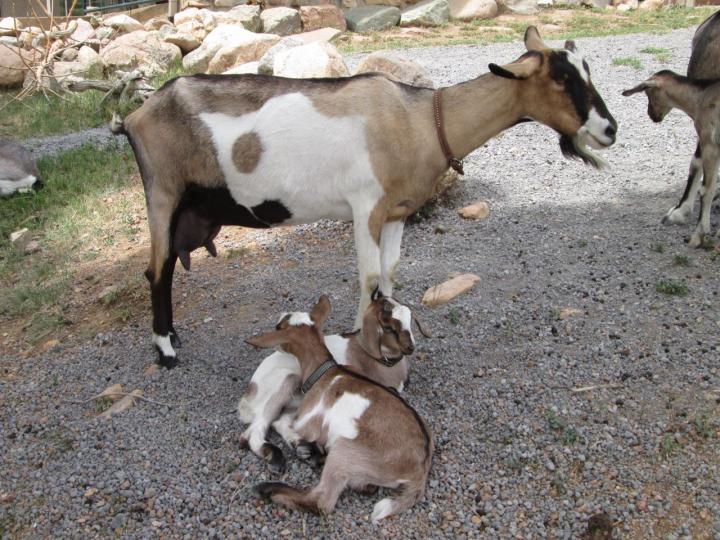 Nauti’s kids are growing like weeds. Sadie is going to be a beautiful, striking doe. And Maxwell… I just have to laugh at this little guy. He’s about as gung-ho as a goat can get. I’ve been having to correct him on an almost daily basis because he insists on pushing me with his little horns. He’s getting better, but I think whoever ends up with this goat is going to have to keep on top of the manners. This little guy started using his nubs on people earlier than any baby we’ve ever had. They all try it at some point, and most go through a phase where they have to be corrected fairly regularly, but Max started a lot sooner and is more persistent than most. Unless his personality changes during wethering and re-homing, he’s definitely going to become an “alfa goat” type. He’s very bold but also very friendly. If I sit down, he makes a beeline for my lap and he stays there. But if I put him down and turn my attention elsewhere, there’s a very good chance I’ll soon feel his little nubs digging into my lower back. And of course he’s already chasing the girls with a lascivious gleam in his eyes. 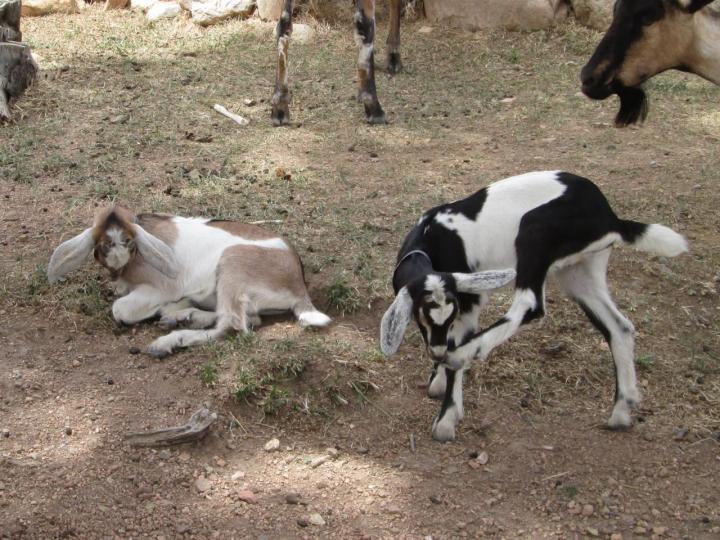 Penny and Rita are growing nicely and are sweet as they can be. Jezebel, as always, is a very doting and nurturing mother. 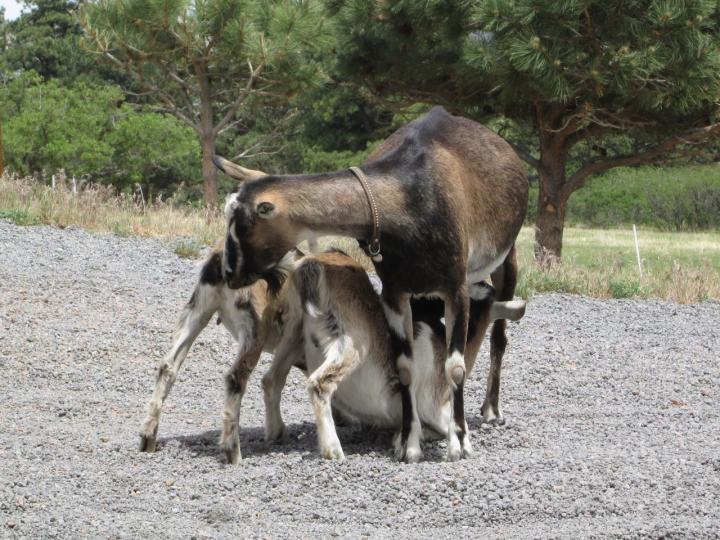 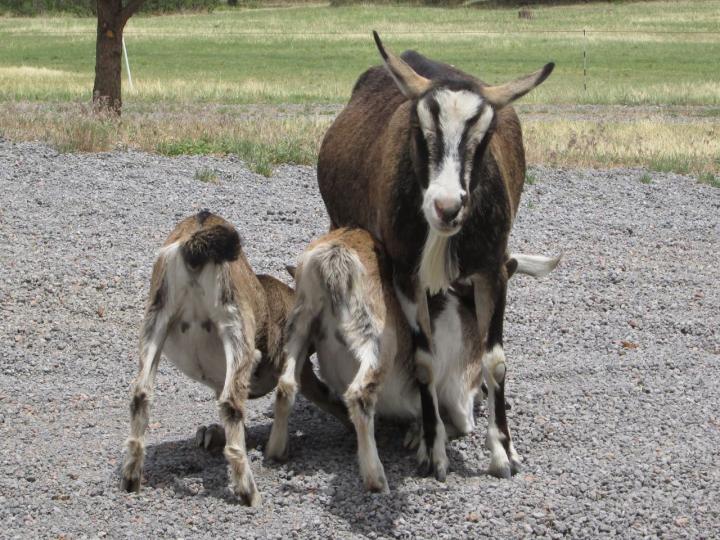 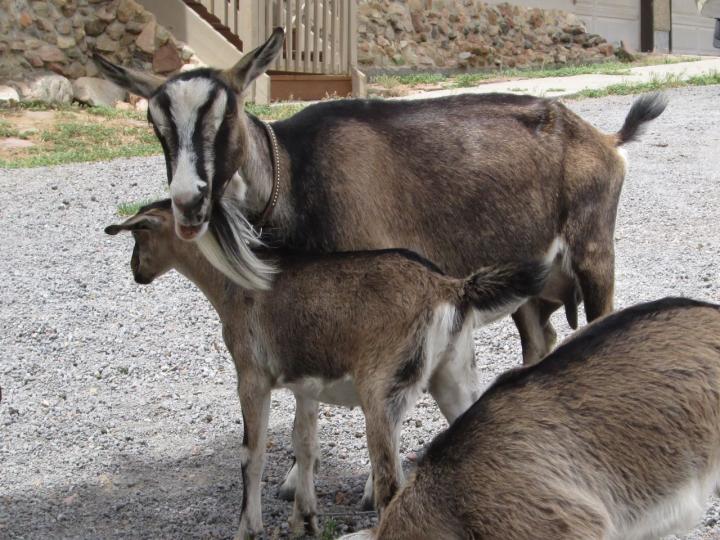 1 thought on “One big, happy family”