Daisy spent all day with the goats and I feel comfortable leaving her there tonight. She stopped being scared of the goats this morning when she realized that Cuzco was more afraid of her than she was of him. I don’t think she’d ever seen a monster that size. Cuzco’s hair has been puffed up all day, and I don’t think he laid down once. Nubbin has glued herself to him in the mistaken belief that he’s the most likely to protect her from this new menace. Silly goat! She ought to realize that of all the creatures in the pen, Cuzco is the most likely to damage her.

Lilly was aggressive with Daisy this morning, but Daisy would only lie down in a submissive pose when Lilly approached her, and she would slink quietly away if Lilly hit her. So by now Lilly has decided that the dog is an uninteresting object and is already mostly bored of her. 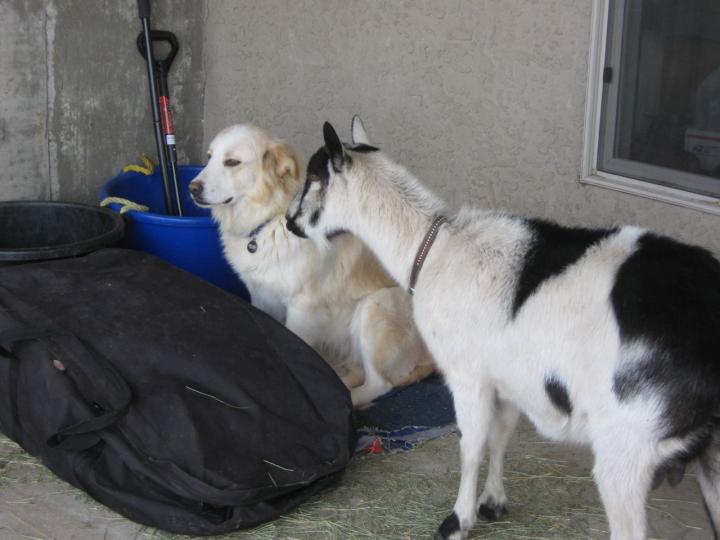 I sat on the edge of the stanchion and tried to get Petunia to sniff noses with Daisy this morning. The second that dog touched Petunia, she leaped into my lap and started shaking like a leaf. I held onto her while Daisy gently licked Petunia’s nose. I thought it was sweet. Petunia wasn’t sure what to think, but I’m pretty sure she didn’t care for dog breath.