We went to the water slides again yesterday with some friends, this time just to play! 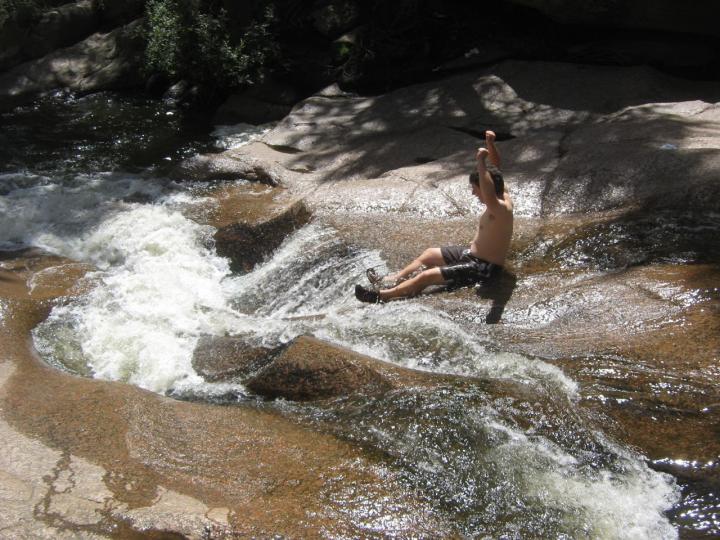 I gave Sputnik a well-earned break and made Finn do the work this time. He was a trooper, but I’m not sure he was quite as proud of his job as Sputnik. 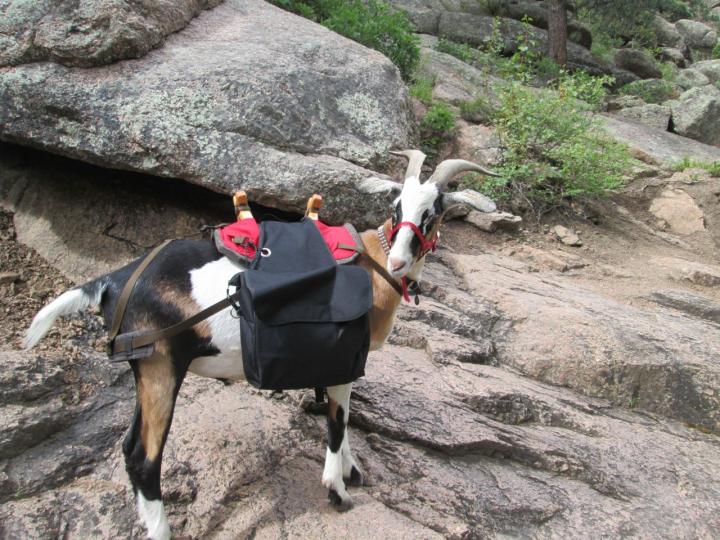 Finn stowed Tigerlily along with him. Can you see her peeking out of his pack? 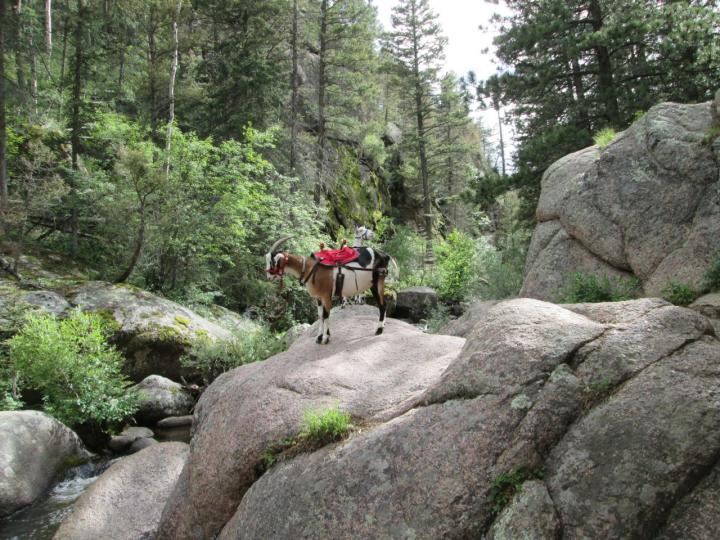 Here’s our girl! She is as athletic and gung-ho as her father, Finn. But she HATES water! The first little creek crossing was just a toe-wetting along the very edge of the creek where a cliff came down to meet the water. She started to follow me then suddenly turned and tried to scale the cliff. She hit the end of the leash with a snap before I could react and came tumbling back down where she landed with a splash on her belly in two inches of water. It was very traumatic! Her worst fears about the horrid liquid were confirmed–water is wet! 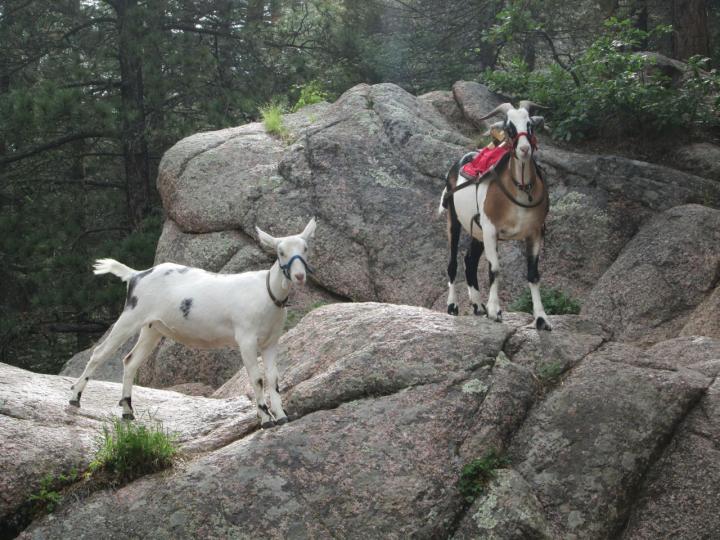 We saw some lovely butterflies along the trail. 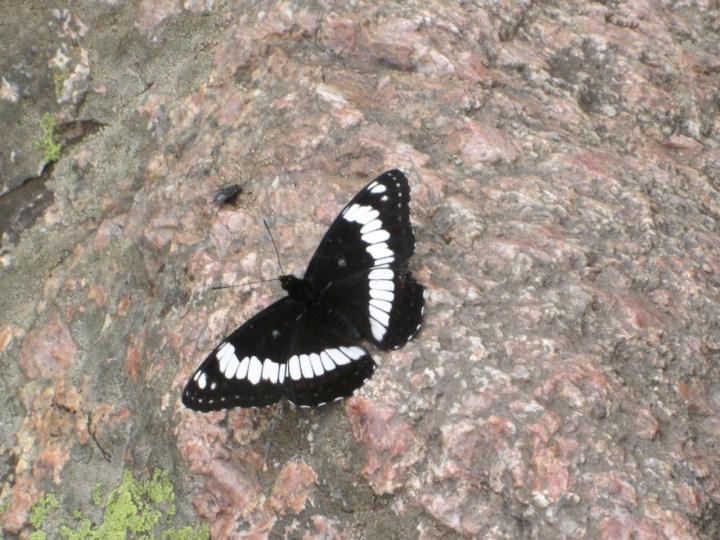 Shortly after the butterfly sighting we had to cross the dreaded creek. It’s a somewhat tricky bit where you can cross to one side on a single long, smooth rock shaped like a fallen log, then you double back and have to cross through the water and some stepping-stones. I don’t like the stepping stones part. It’s much too rough and slippery. The pool below the big crossing rock is about thigh-deep if you skirt the edge of it. This is the place where Sputnik showed his water bravery yesterday. Tigerlily, on the other hand, made a spectacle of herself. Finn was being reluctant about the water himself, so I put him on a leash and made him follow me. I tied Tigerlily to the back of his saddle and expected her to follow. She did at first and even plunged into the “deep” water. Unfortunately she didn’t follow Finn onto the big rock when we got to it. She panicked and plunged and decided to try to escape to shore through the pool instead. She very quickly ended up in water over her head and was hanging by the halter from Finn’s saddle. Finn wisely stopped and stood still as a statue while I untied the unfortunate Tigerlily. I couldn’t lead her back where we came from to the easy water exit because Finn was standing in the middle of that narrow rock and I didn’t want to try backing him up in that slippery place. With nowhere to go but forward, I towed the now-pathetically baa-aa-ing Tigerlily behind me through the deep water. She apparently gave herself up for lost at this point because she didn’t even try to swim but instead collapsed like a dead thing, bobbing limply along in the water. She was heavy, but I got her to the exit point where I needed her to climb. She had nothing to push off of underwater because it was too deep, and she wouldn’t kick against the water or clamber with her front legs but just laid there baa-aa-ing and refusing to move. So I braced my feet on the rock and hauled her out by the the collar like a big fish. Once she was on shore she immediately came to life and stopped crying, but we’re going to have to give her some better water experiences very soon after this!

There’s a steep hill at the trailhead, and the youngest member of our crew didn’t think he could climb it without help. So I put a leash on the back of Finn’s saddle and told him to hang onto it. Finn towed him up quite easily. 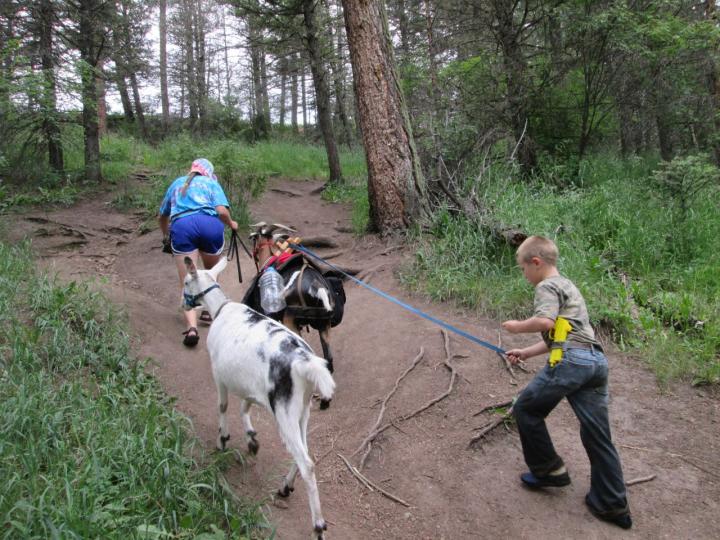 1 thought on “Back to the slides!”