A dead tree blew down in a remotish corner of our property over a year ago and I’d put off cutting it up and hauling it to the house because it was on a steep slope with a lot of rocks and trees that made it tricky to get a truck or tractor back there. I do drive the tractor back there, but lately we’ve either had too much snow to be safe on the hill or else too much mud to let me cross my pasture without tearing deep ruts. But darn it we were running out of firewood and I wanted that dead tree! So I had a brilliant idea–use the goats! Sputnik is always eager for a bit of work so I hitched him up and he hauled the chainsaws and gas can out to the dead tree. I tied him up nearby and got to work. Soon there was a respectable pile of firewood and log rounds lying where the tree had been.

I loaded the cart and Sputnik eagerly pulled it back to the house, almost dragging me along with it! 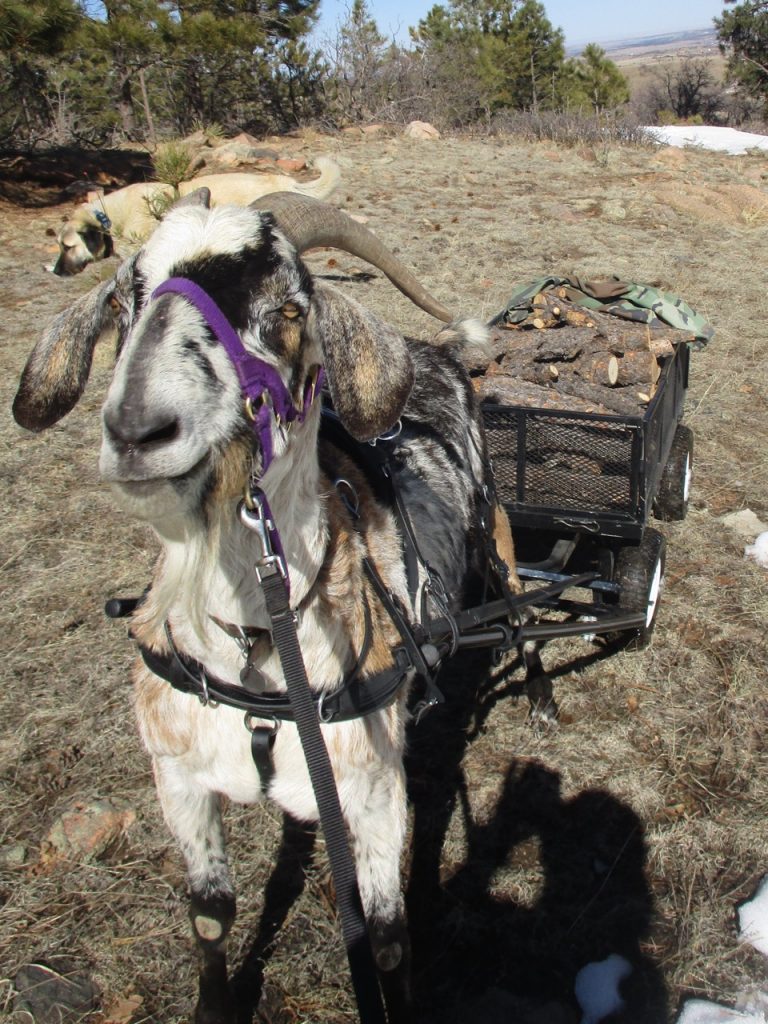 He’s not proud of himself at all! No, not one bit! 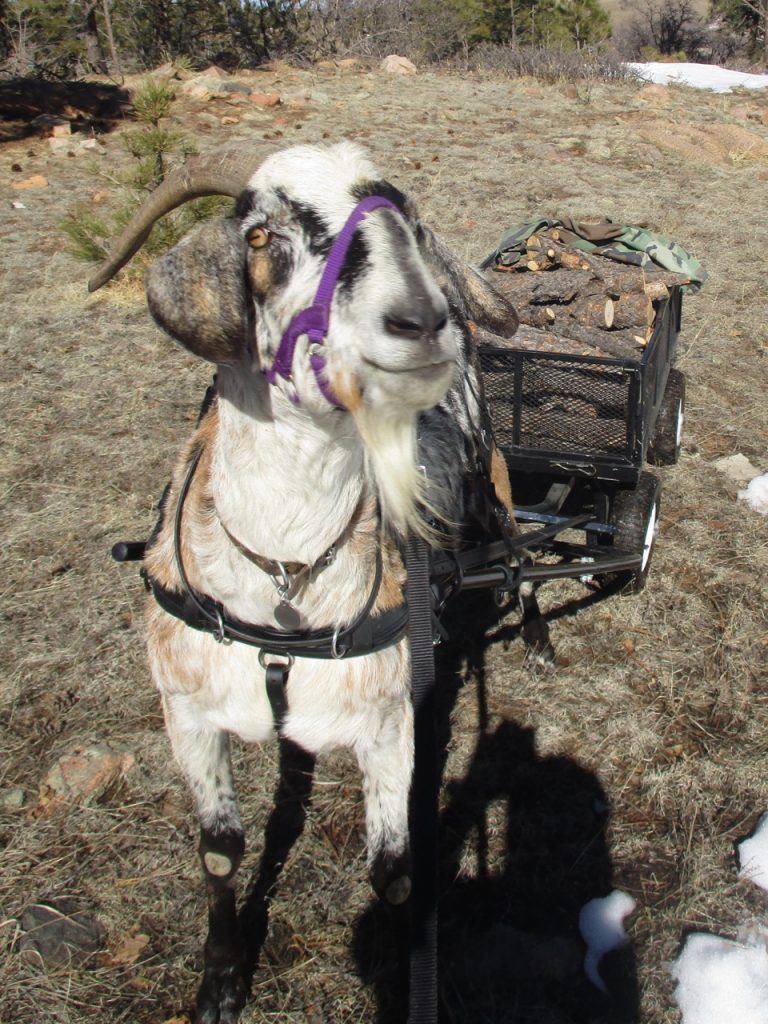 The second load was heavy! The logs I cut from the tree stump that was left standing after the rest blew down were still a bit green.
Sputnik was overeager at first and kind of dragged me out to the tree by his halter and then dragged me back home with the first load. He started out eager with the second load but settled down very quickly when he realized how hard it was! By the third load he was Mr. Steady Eddy and I didn’t even have to tie him when I loaded and unloaded the wagon. He stood very nicely, happy for a little break between loads. 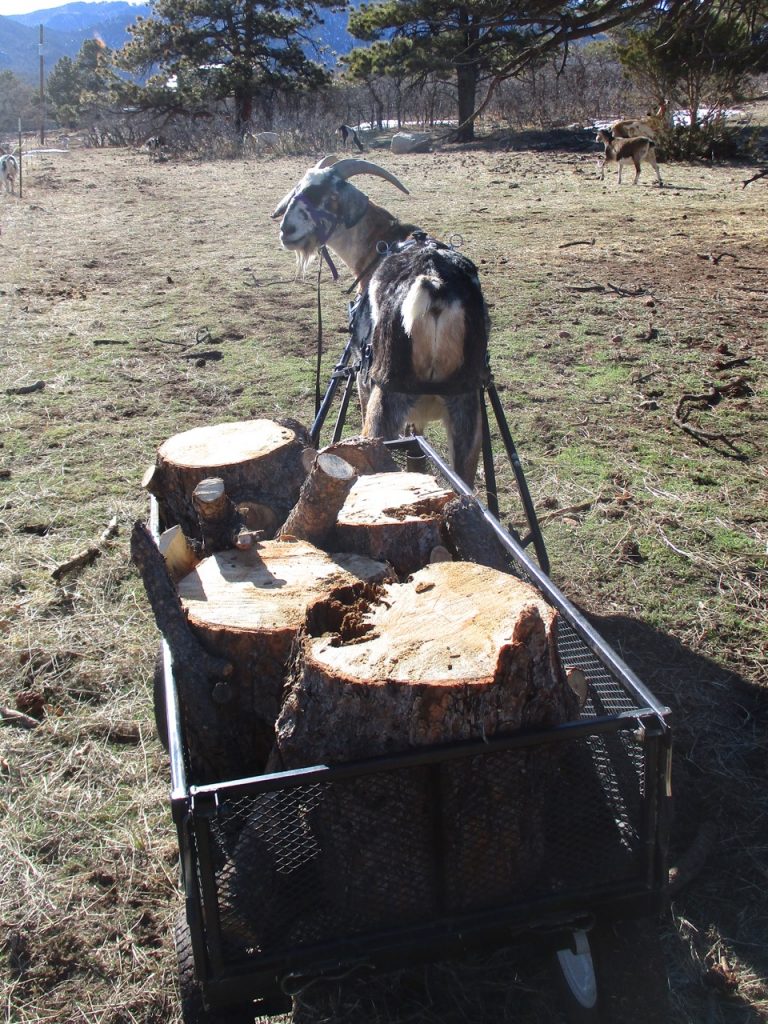 By the end of the fourth load Sputnik was getting tired. I had given him all the heavy logs, and the long trudge back home was mostly uphill and bumpy. Meanwhile I’d locked Finn up on the patio because he had been such a pest when Sputnik was hauling the first load. He dogged Sputnik the whole time, poking, prodding, and shoving him while Sputnik was trying to work. I shooed him away but he would run around the other side and start pestering again. Sputnik didn’t deserve that kind of treatment and I had no time for nonsense, so as soon as we got back to the house with our first load of wood, Finn went straight to jail. He watched in silent envy as Sputnik went away and came back with three more loads. By the time Sputnik needed a break, Finn was rarin’ to go. Normally Finn does not like pulling the wagon and if I’d started out with Finn he’d have been sullen and balky. As it was, watching Sputnik get all the attention and treats sparked Finn’s jealousy and by the time I hitched him to the wagon he was more than eager to work and he practically dragged me out to the tree as Sputnik had done at first. 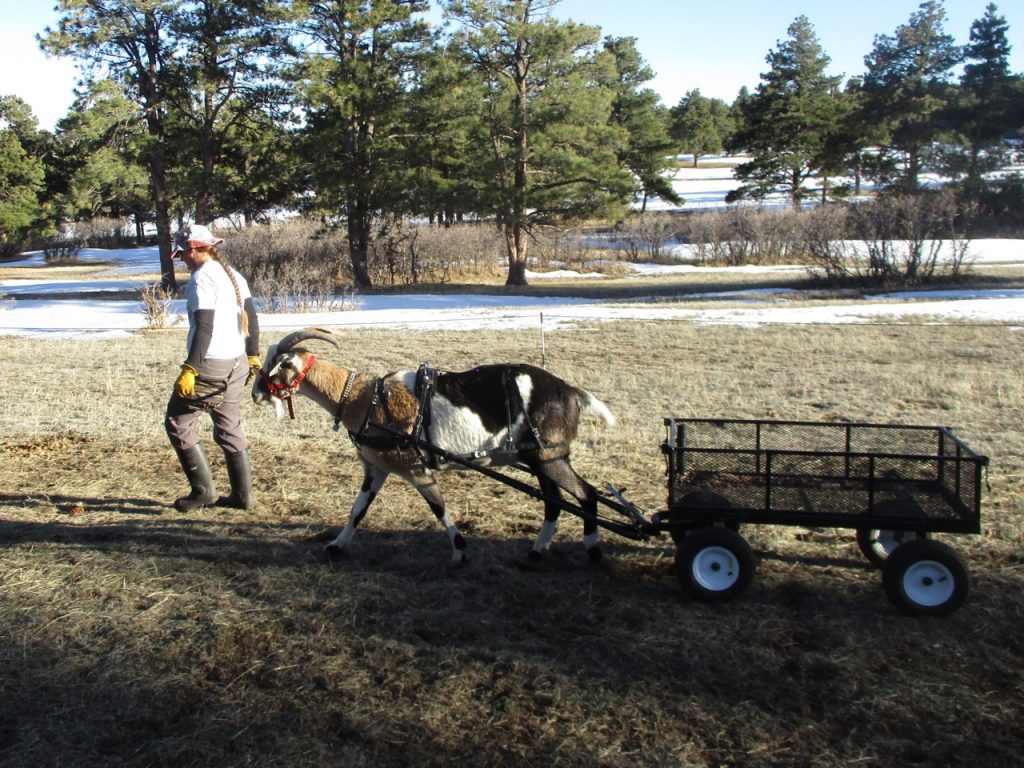 The entire herd was eager to help and followed back and forth on every trip–supervising no doubt! I felt like the head of a large parade. 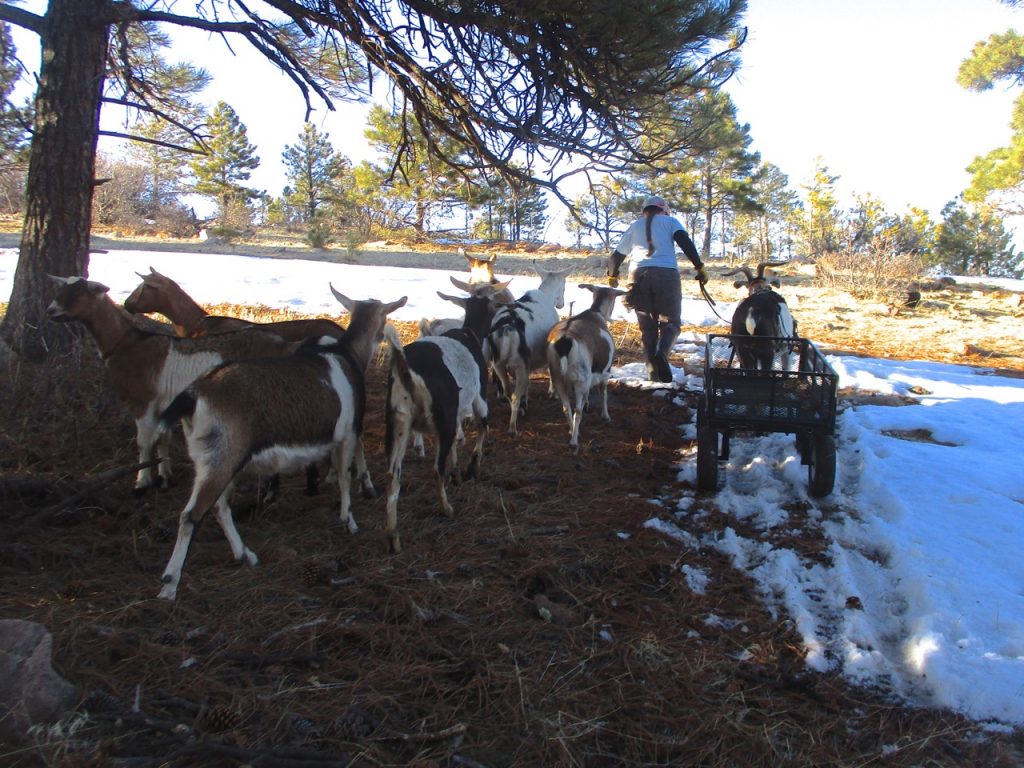 Finn ended up only having to haul 2 1/2 loads and they weren’t as heavy as Sputnik’s, but he still felt like a hero. 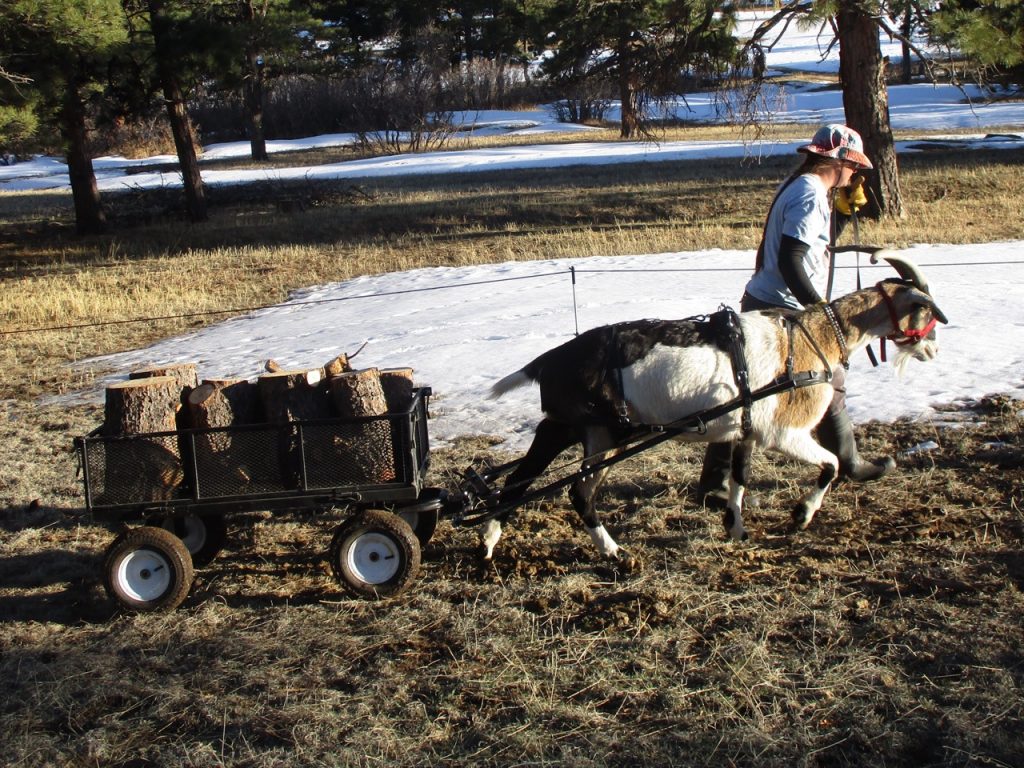 A nice drink of water for our hard worker. 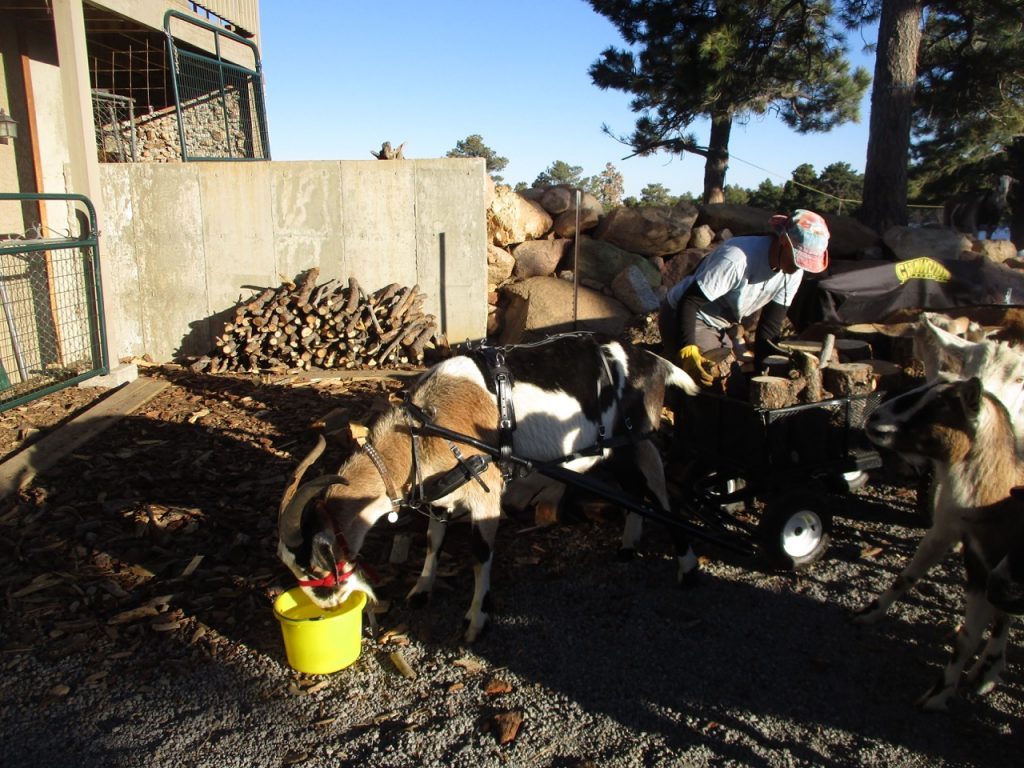 Sadie did not help at all but she would like us to think she did something important by walking back and forth all those times. Oh wait–she cleaned up a lot of the wood chips from the wagon after I emptied it. See? She did do something important! 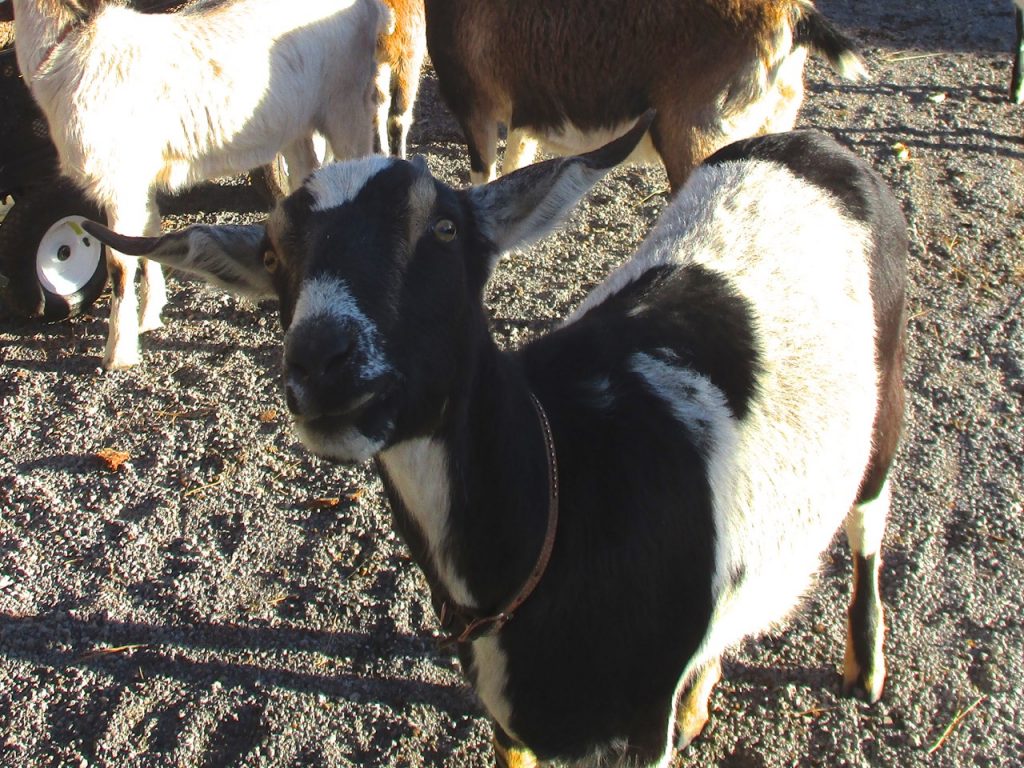 3 thoughts on “Fetchin’ in the Firewood”