Phil and I took Finn and Sputnik for walk around Cuzco’s old stomping grounds at Lake Beckwith this afternoon. The boys had a fun time, and Sputnik has gotten to where he is pretty eager about running over and hopping in the truck when it’s time to go for an outing. The goats were somewhat intrigued by the geese at first, but soon decided they were boring. 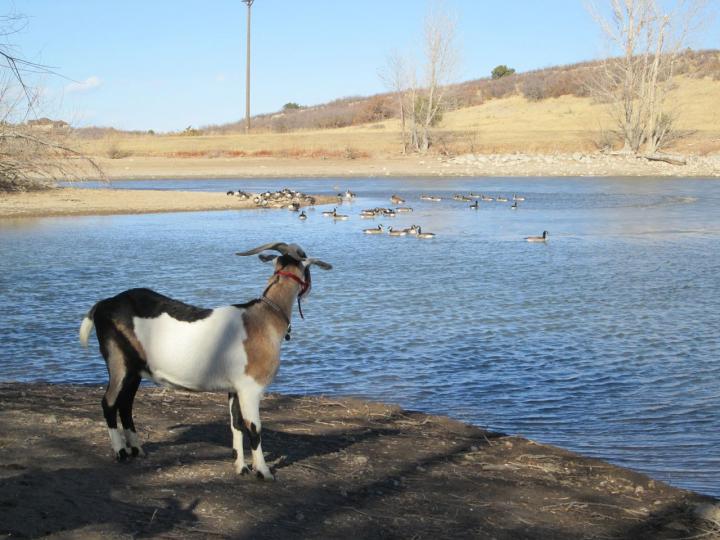 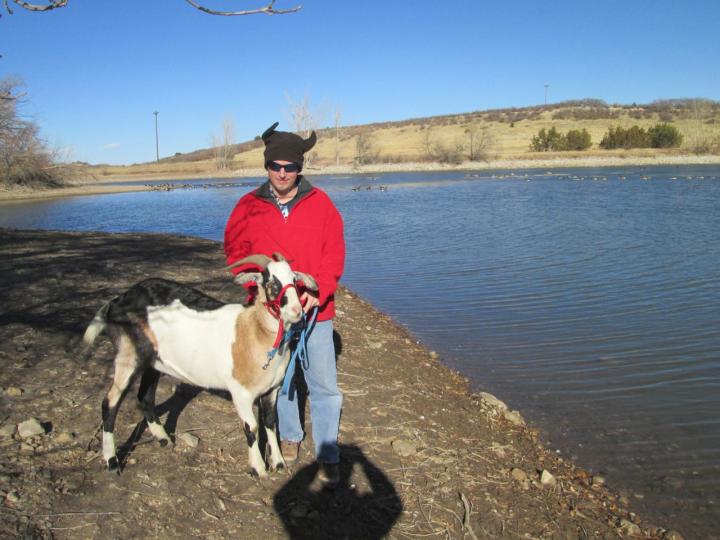 The lake is very low right now. We could desperately use some snow. Normally the lake goes all the way up to the trees. 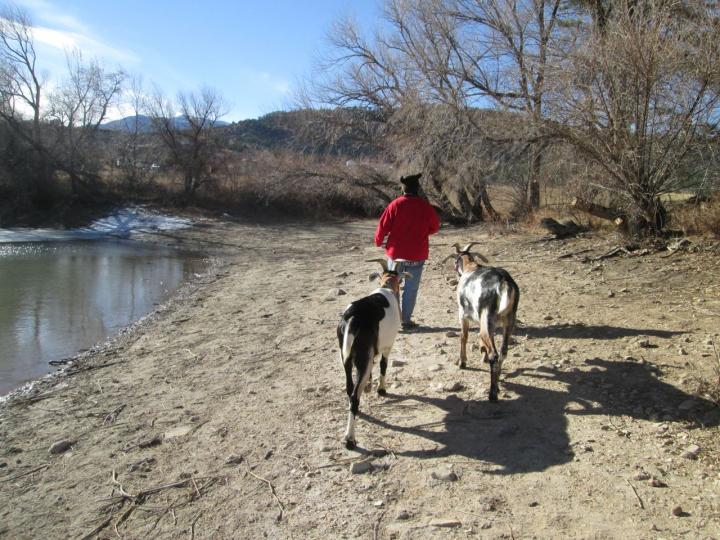 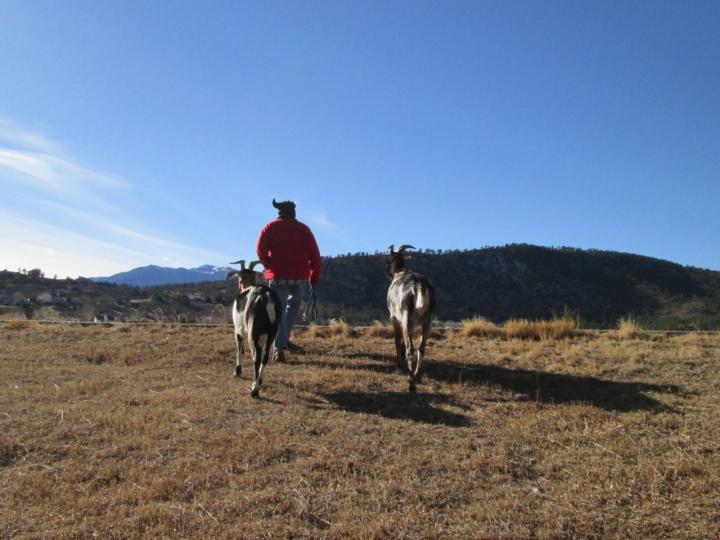 The ice chips along this shoreline made some really cool sounds in the lapping waves. They tinkled like wind chimes. 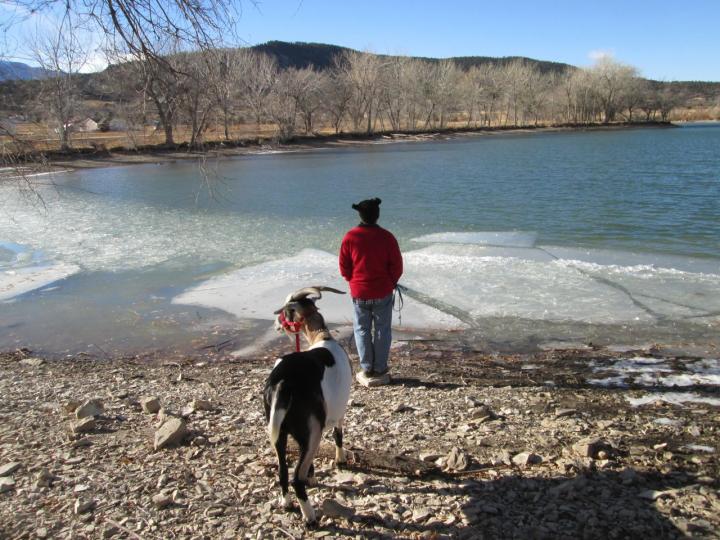 This ridiculously awkward photo was supposed to be cool, not embarrassing. But I’m posting it anyway because it’s funny. I was sending Sputnik over this creek and back and he was jumping magnificently with just a point from my finger. I wanted Phil to get a photo, but wasn’t sure he’d get the timing right if he didn’t know when Sputnik would jump. So I jumped first so Phil would know when to click. It somehow didn’t come out very well. It looks like Sputnik butted me right over the ditch! He also looks like he’s straddling it instead of jumping it, which I guess would be a more impressive feat actually. Well we had fun anyway. 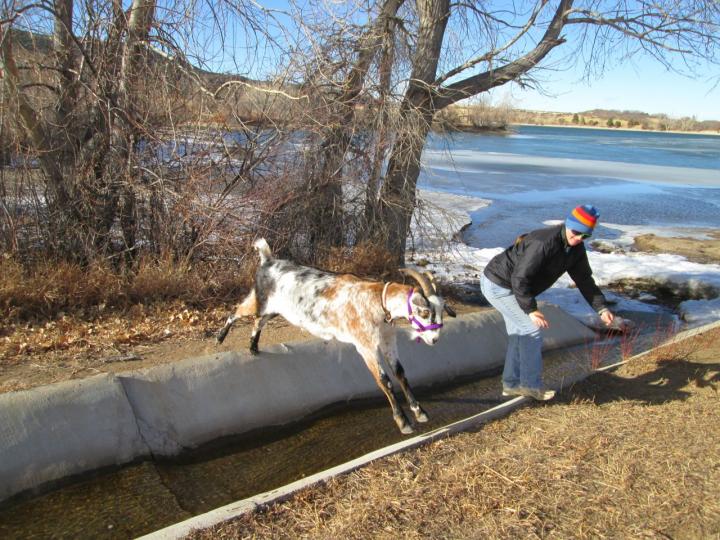 Sputnik has learned very well that when I point at an object he should jump on it. Phil and I both spent time working with our boys and had them jumping ditches, hopping on rocks, walking along the tops of stone walls, and jumping back and forth over guard rails and parking barriers. Sputnik did not want to jump over the three-foot parking barriers. The were higher than he wanted to jump and it was easier to go under or around. Treats weren’t convincing him, so our practice at driving came in handy. Sputnik has learned that if I tap his hindquarters it means “go forward”. When Sputnik refused to jump the barrier, I swung the leash toward his hips and he went straight over without a fuss. He got his cookie and then jumping was suddenly fun! He got balky again when Phil took Finn back to the truck. That time I slapped Sputnik lightly with the leash handle and he immediately got the point. He quit looking at Finn, got his attention back on me, and jumped the barrier. He seemed very proud of himself for jumping without Finn there for moral support. Sometimes it takes a bit more work to make Sputnik do something he’d rather not try, but it’s always worth it in the end because he gets very excited and full of himself afterwards. When I push him to accomplish what I ask, his self-esteem goes through the roof! 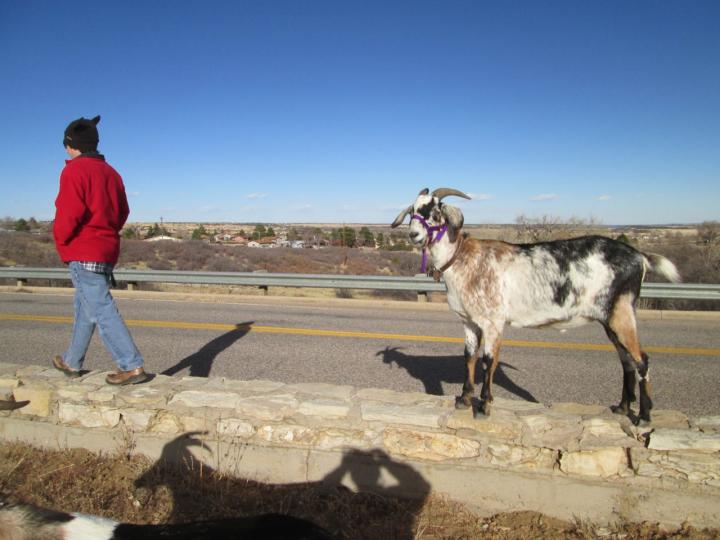