Yesterday we celebrated my nephew, Robert’s, sixth birthday. Robert is obsessed with cowboys right now, so we all donned our western shirts, sheriff badges, and mustaches, and had a hoedown! My mom brought a pony for the kids to ride. Here’s Robert with his cowboy mustache showing off his “Hi-Ho-Silver” skills while my mom does the actual pony wrangling. Robert’s dad (my brother) is in the background brushing up on his lasso tricks. 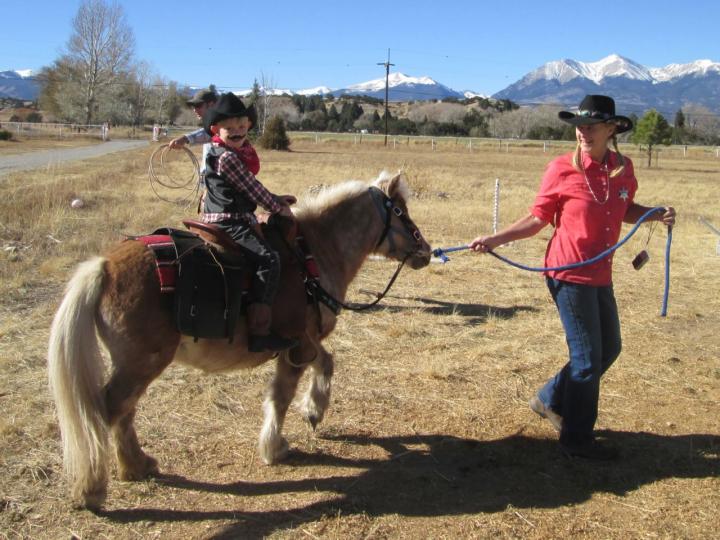 Phil and I brought goats with us to the party. Sputnik grew a mustache for the event, but we had a hard time getting him to sit still long enough to photograph the evidence. When he wasn’t brandishing facial hair, he wowed the kids with his endless repertoire of tricks and jumping skills. 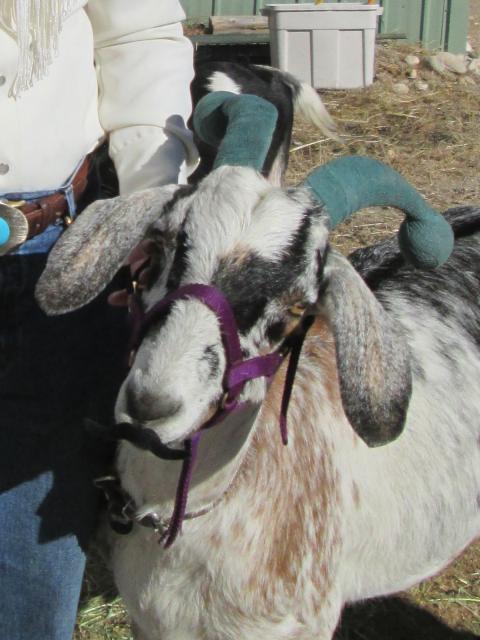 Our goats have been marvelously good about keeping their horns away from people, but since kids are unpredictable and accidents can happen, we used tennis balls and vet wrap on the horns again like we did on Halloween. I think this will be our standard practice for bringing horned goats to public events where kids and goats get to interact. I love horns, but I never want to take them for granted, especially since kids’ faces are on the same level. 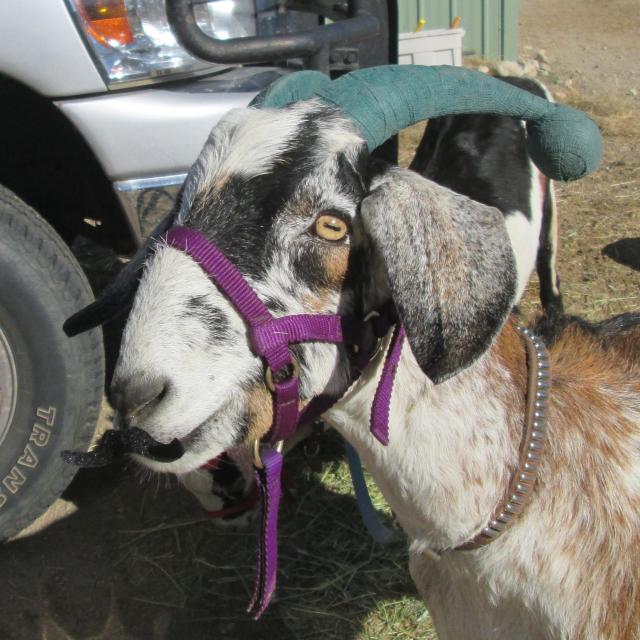 I know these photos are all kind of the same, but I’m so proud of Finn that I can’t help myself. Phil and I hitched him to the cart for the first time last Thursday, and not only was he big enough to fit the shafts and hold the cart level, he seemed to really enjoy pulling it. So after only five minutes of practice on Thursday, he jumped right in at the deep end on Saturday and started his carting career by pulling kids around at the party. Since Finn is only 18 months old, we kept the pulling time short at only about 20 minutes, and we were careful to make sure he wasn’t getting tired or fussy.

Robert the birthday boy got to ride first with his pink-hatted friend. 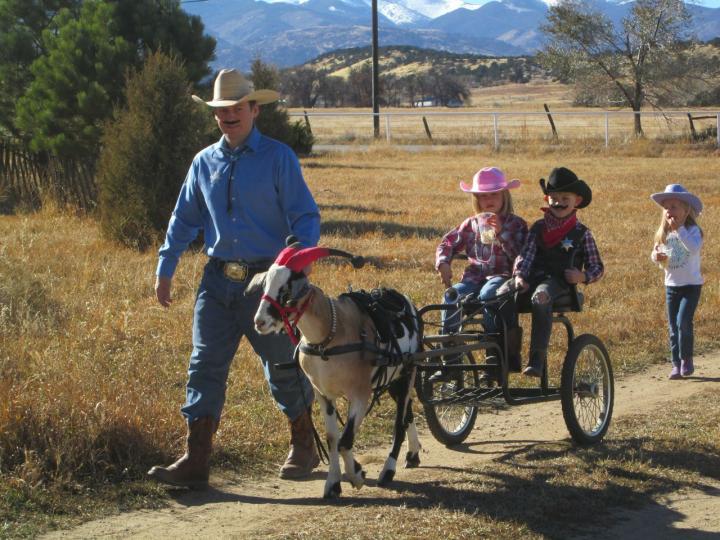 Next came our other nephew, Sam with his white-hatted friend. I’m not sure what happened to Sam’s hat. Maybe it got shot off! 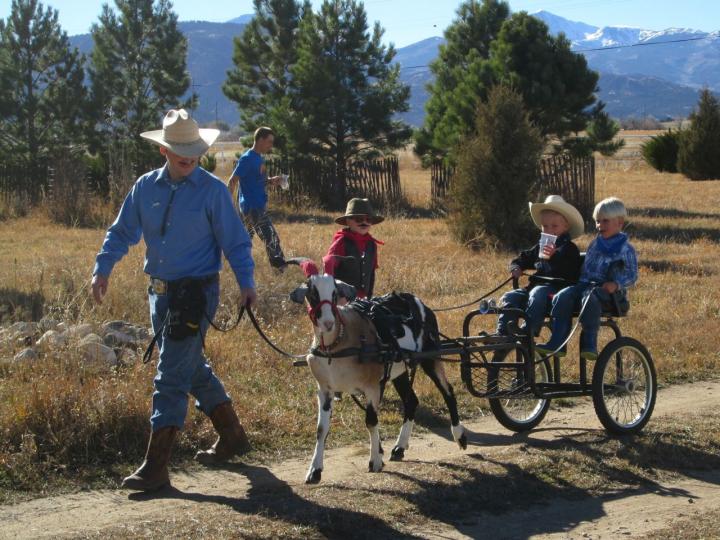 I don’t know either of these boys and the photo might seem redundant, but I had to include it because of the look of intense concentration on this little cowpoke’s face as he holds the reins in a death-grip. 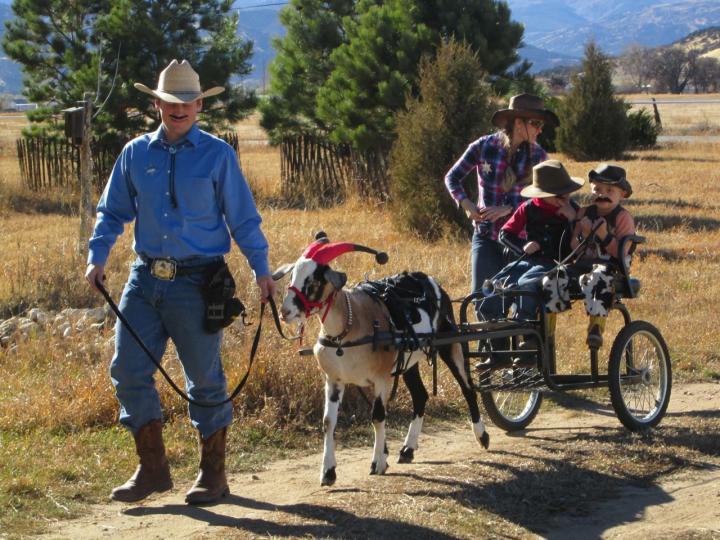 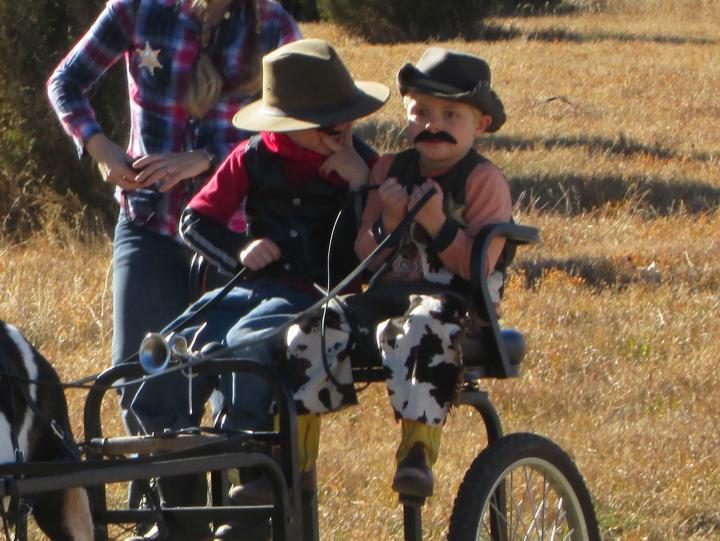 As usual at these sort of events, I attached the reins to the harness saddle so the kids could feel like they were doing the all-important job of steering without actually interfering with the goat. Childhood is full of so many wonderful illusions.