Today we said goodbye to our old friend Cuzco. I gave him a final grooming, and we put the other goats away so Phil and I could take him for a last short walk with us all to himself as he’s always preferred. He couldn’t go far. He was so tired. He had a wonderful last day. He ate four powdered donuts and the remains of last night’s popcorn full of butter and cheese dust. He got to lick the bowl clean. He ate many peanuts and animal crackers on our walk, and he finished up with almost an entire can of cheddar Pringles. He was a happy goat right up to the end. It was truly a sign when we came back from our walk that Cuzco stopped at his own graveside and waited there while Phil and I went on across the pasture and up to the house to retrieve a few things for his burial. I’m sure he knew, but he was ready and, true to form, he wasn’t afraid. Cuzco cheated death so many times in his fifteen years that I guess by now he had nothing left to prove. He reminded me of “The Tale of Three Brothers” in the book Harry Potter and the Deathly Hallows–“And then he greeted Death as an old friend, and went with him gladly, and, equals, they departed this life.”

Also true to form, he gave us a perfect Hollywood exit. Cuzco has never graced the Silver Screen, but if any goat deserved a star on the Walk of Fame, it’s him. He lay down, leaned his face against mine, and when our vet gave him the injection he simply went to sleep. There was not a gasp or a groan, not a shudder or a flinch. I felt his last breath hit my cheek and then his head fell softly into my lap where he lay still while his heart gave it’s final few beats. And I am reminded of yet another Harry Potter quote: “…death is like going to bed after a very, very long day.” Cuzco set his affairs in order when he passed the leadership baton to Finn, and there was nothing left for him to do.

I left his collar and ID tag on him. I figured that way when he got to Heaven they’d know he belongs to us and won’t send him the other direction for being ornery and growling at Saint Peter. Even if he has to stay in “unclaimed baggage” for a while, at least they know we’ll pick him up eventually. I also left him with the remainders of the can of Pringles so he can snack along the way. Yeah, I know it’s all very silly, but it felt better than hauling that stuff back to the house with me and then having to look at it. Cuzco had sneezed in the Pringles can anyway so they were all his.

Cuzco is laid to rest under our totem pole. His baby portrait is carved at the top. When we look out the window or come up our driveway we’ll see his marker and be reminded of all the wonderful, happy times we had together. I’ll never forget my “Cuzco the One-Horned Wonder Goat”. He’ll always be larger than life, like the goat version of John Wayne. It’s been very hard to let him go, but it was the right thing to do. He was ready, and as he gently passed from this life I could almost hear him whisper “Thank you.”

This was our last photo together. 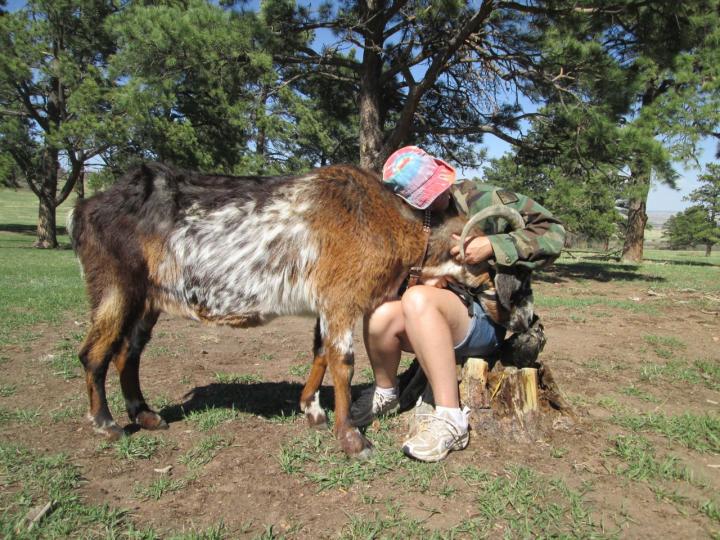