Now that our annual “goat vacation” is a good 2 1/2 months behind us, I’m finally going to chronicle our adventures. At least, I’ll get started. Let’s hope I eventually have time to finish!

Like many things this past year, our goat vacation was a little up in the air. We weren’t sure when it would happen or for how long, but at least we knew where we wanted to go. Ever since she was born, our friend Herb was smitten with little Butterfly, and after she got hurt he fell in love with her even more. We knew Butterfly would probably never be a good breeding prospect and Herb wasn’t interested in breeding her so his home was a perfect fit. Herb was also interested in possibly buying Butterfly’s brother, George. Traveling out to visit Herb in Ferron, UT seemed like the most logical place to plan our vacation, but our dates were uncertain. With my dad in the final stages of cancer it was hard to plan anything and we didn’t want to be out of town for more than about a week. We ended up with a vacation at the end of September and it worked out perfectly for all of us. We loaded up Finn, Sputnik, George, and Butterfly and struck out for central Utah.

We arrived mid-afternoon in Ferron and had time for an early evening walk near Herb’s house. Herb had two kids about the same age as George and Butterfly and the babies had fun getting acquainted. Herb wasn’t sure whether he wanted to buy George. He had just bought two kids in the spring and was maxed out on goats. However, I couldn’t bring Butterfly alone on a long trailer ride with just Finn and Sputnik for company. Butterfly and George were fairly inseparable and I thought at the very least George should come along and keep Butterfly company during the trip and help her settle into her new home even if I ended up taking him home with me at the end.

However, it quickly became obvious on this short introductory hike that George would be staying. Not only was Herb delighted with him, but none of us realized how attached Butterfly and George were to each other, or how much Butterfly relied on her strong, fearless brother to give her confidence. When they were first born, Butterfly was the bold, strong one but breaking her pelvis changed everything and now that the kids were away from their mother, George became Butterfly’s protector. It was obvious that George was aware of his sister’s injury and he took his duty toward her very seriously. Herb’s German Shepherd, Luna, kept coming in for a sniff, but George would have none of that! He kept himself between Butterfly and the dog at all times and whenever Luna approached them, George would snort and warn her off with an aggressive foot-stomp. Twice he lowered his sharp little horns and gave Luna a smack in the side. I’d never seen a kid that young be so aggressive with a strange dog. Luna quickly learned to stay away. George also put himself between Butterfly and Herb’s goats. He didn’t want any strangers messing with his sister!

Everyone’s hackles were up on this hike!
Herb’s goats, Oscar and Felix, stared suspiciously at the newcomers. 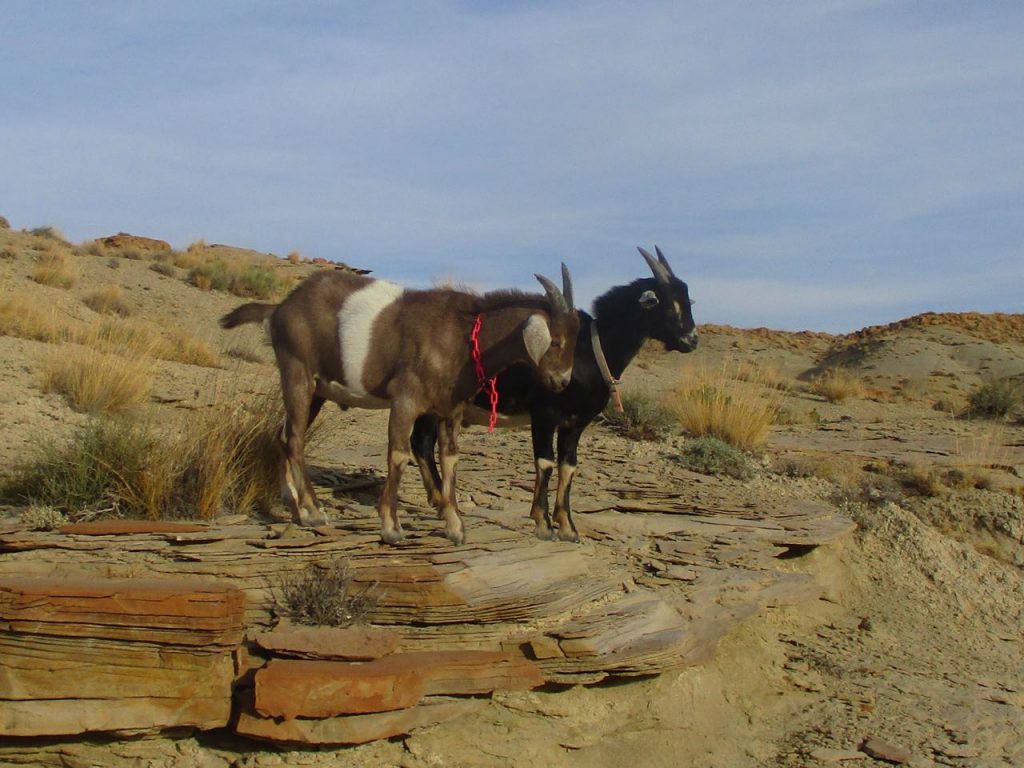 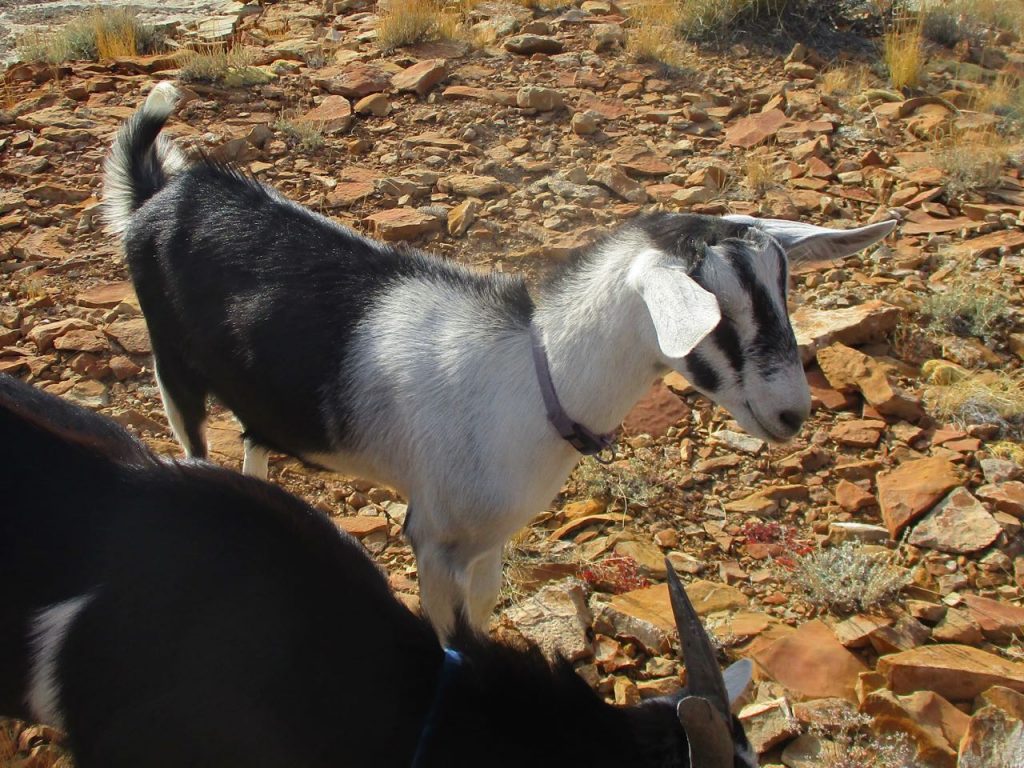 George was ready to take on all comers. He made sure no one messed with him or his sister! 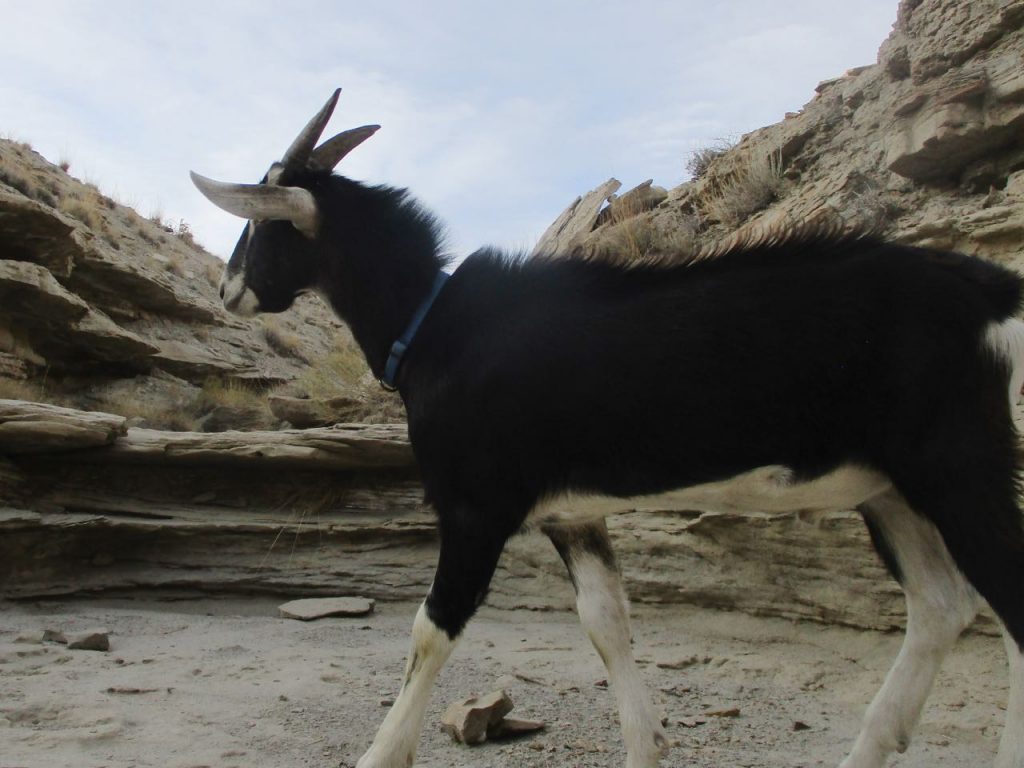 Phil just looks good standing in front of hoodoos in the sunset light.