Phil and I usually take a spring vacation, but never before has it involved goats! Goat vacations are usually reserved for summer (NAPgA Rendezvous) and fall. But this happened to be a good year to include goats on our spring trip. Most of my grandparents are in their 90’s now and can’t travel any more, so if I want to see them, and if they want to see the goats, we and the goats have to do the traveling. All of my grandparents are fascinated by our goats and ask about them any time we talk. Some of them even rode Cuzco’s cart many years ago when we lived in Lake City. When I said I’d go down for a visit, all of them asked if I’d be bringing goats, so I said yes! And since I was headed to Texas with goats, it only seemed natural to also call up some NAPgA members and organize a small packgoat get-together while we were there!

The fun times started on the last day of March when I visited my mother’s mother, who we call Bitty. “Poppy” is no longer with us, but Bitty still lives in her own house in the suburban McKinney sprawl and my aunt Laura lives with her and takes care of her. Bitty was thrilled when I told her we were bringing the goats. She had us put them in her little back yard so we could watch them through the window while we visited. 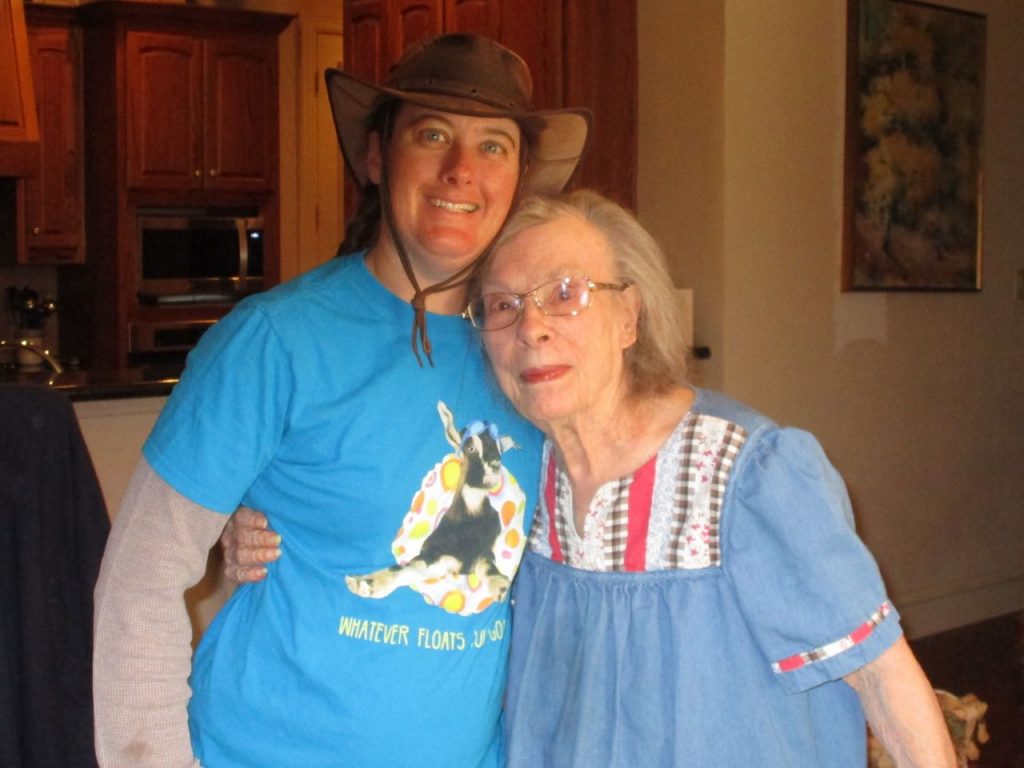 Bitty spent some time petting Finn through the back door, but she couldn’t manage anything more because it was very cold and windy that day. We had been hoping to take her for a goat cart ride, and if the weather had been nice I’m sure she would have loved to take a spin through the neighborhood! But alas, it was not meant to be! 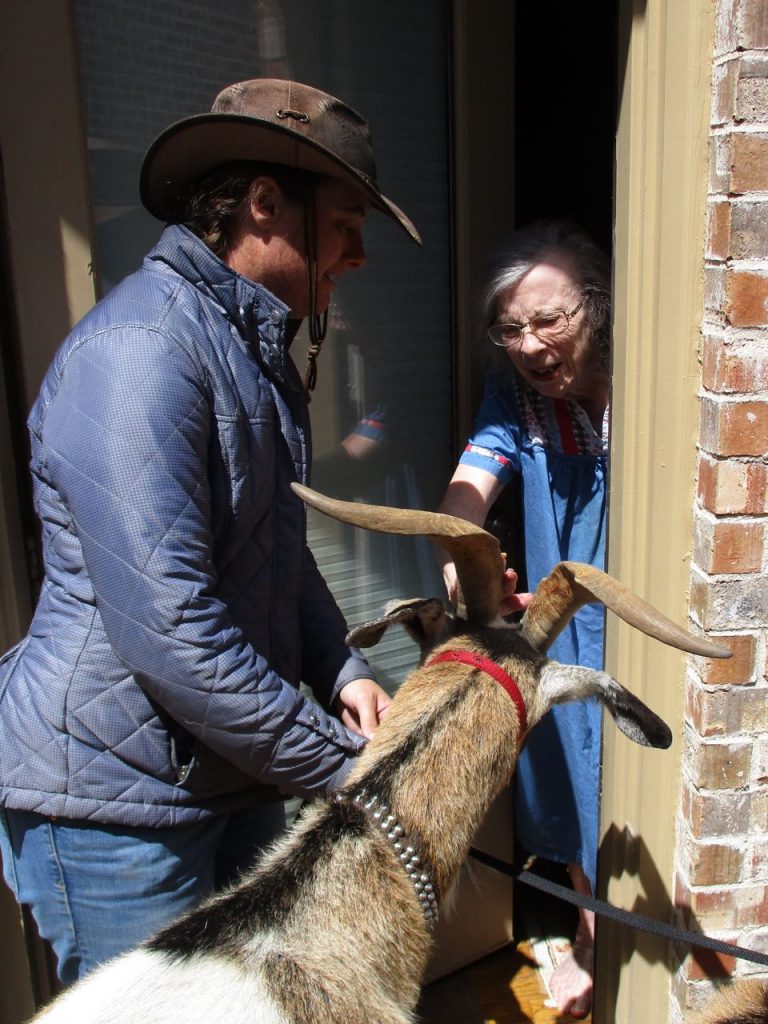 It’s a good thing Finn is gentle because he’s taller than Bitty! 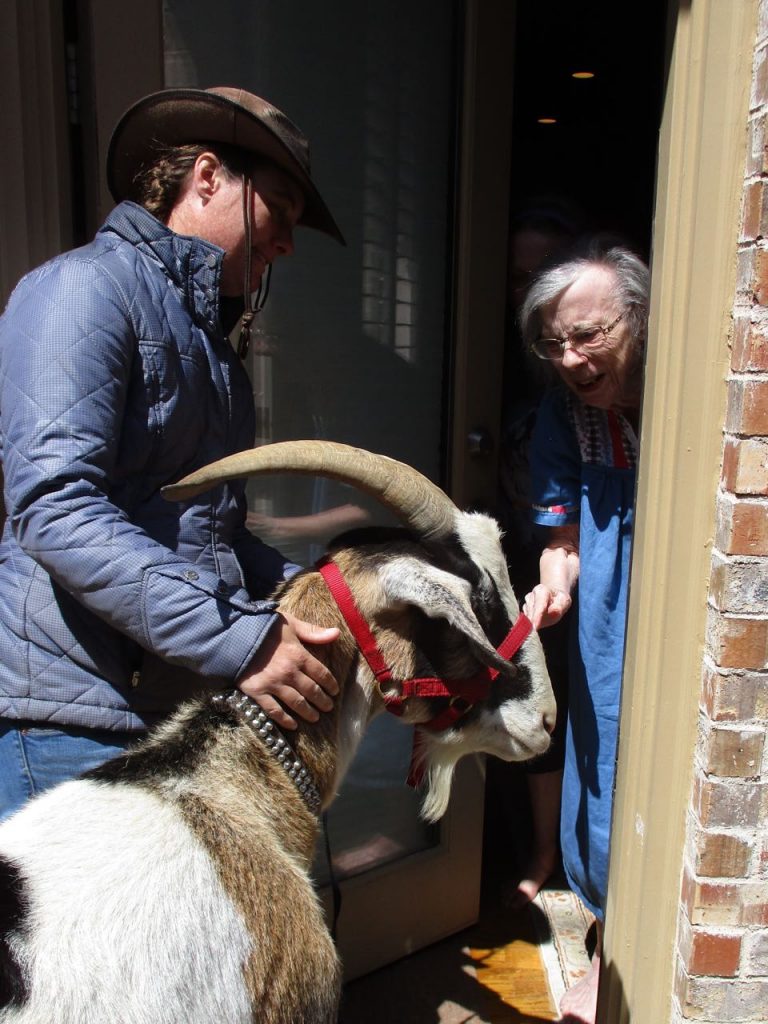 My aunt Marva and my cousin Erin live a few miles from Bitty in an almost identical-looking suburban neighborhood in Frisco. Miles and miles of countryside north of Dallas have been carpeted by McMansions laid out in over-planned neighborhoods with mazes of streets and houses that all look alike. Goats are very out-of-place in these settings, but that’s one reason it’s fun to take them there and see the looks on people’s faces!

My cousin Erin has four kids and all of them were eager to see the goats! We started off with a little goat show, and Sputnik even shook hands with the older two girls, Kinsey and Hadley. Then I hitched Sputnik to the cart and we gave them a ride. “WEEEEE!” It’s a good thing I always hook the reins to the harness instead of the halter because kids sure love to haul away! 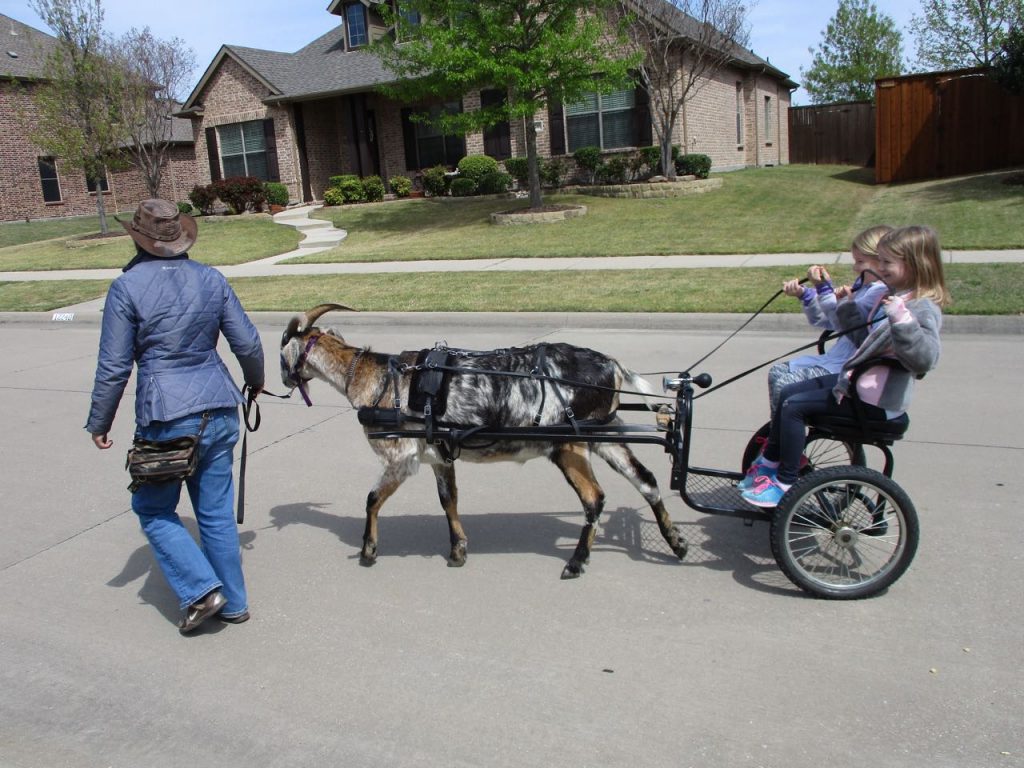 I think everyone is grinning in this picture–even Sputnik! 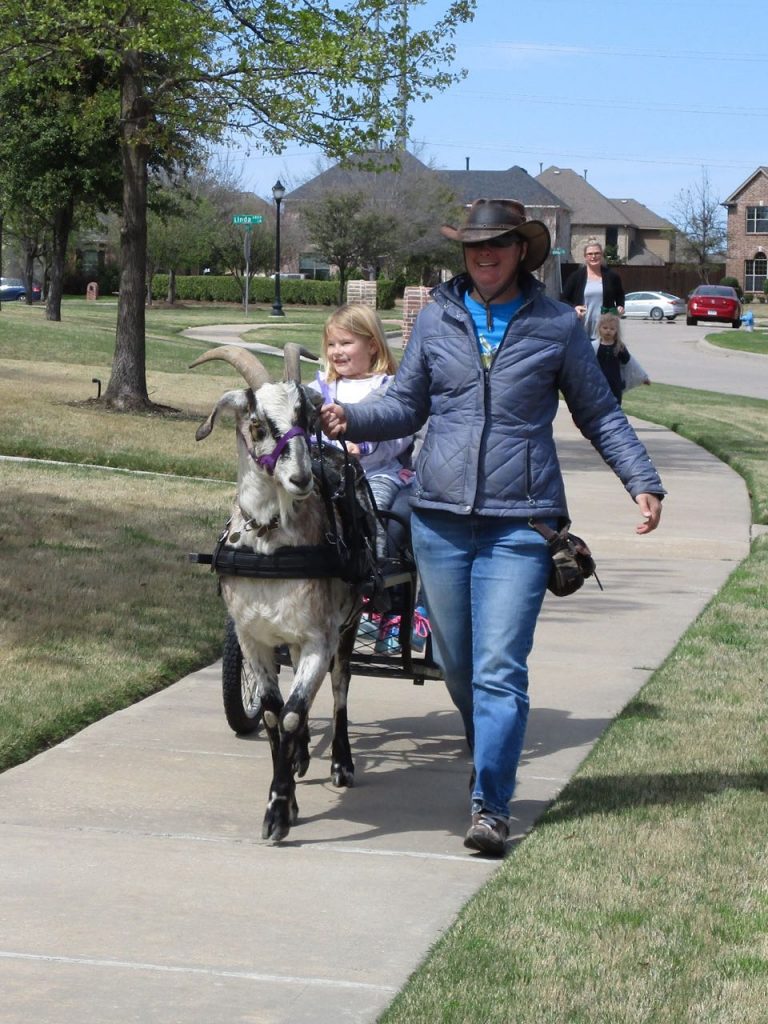 Erin rode with her daughter Findlay. Findlay was very upset when the ride was over and didn’t want to let anyone else take a turn. There was much weeping and gnashing of teeth when Erin made her get off and share, but she got to take another turn later, so it was ok! “Don’t worry, Findlay… I don’t like to take turns when it comes to goat rides either!” 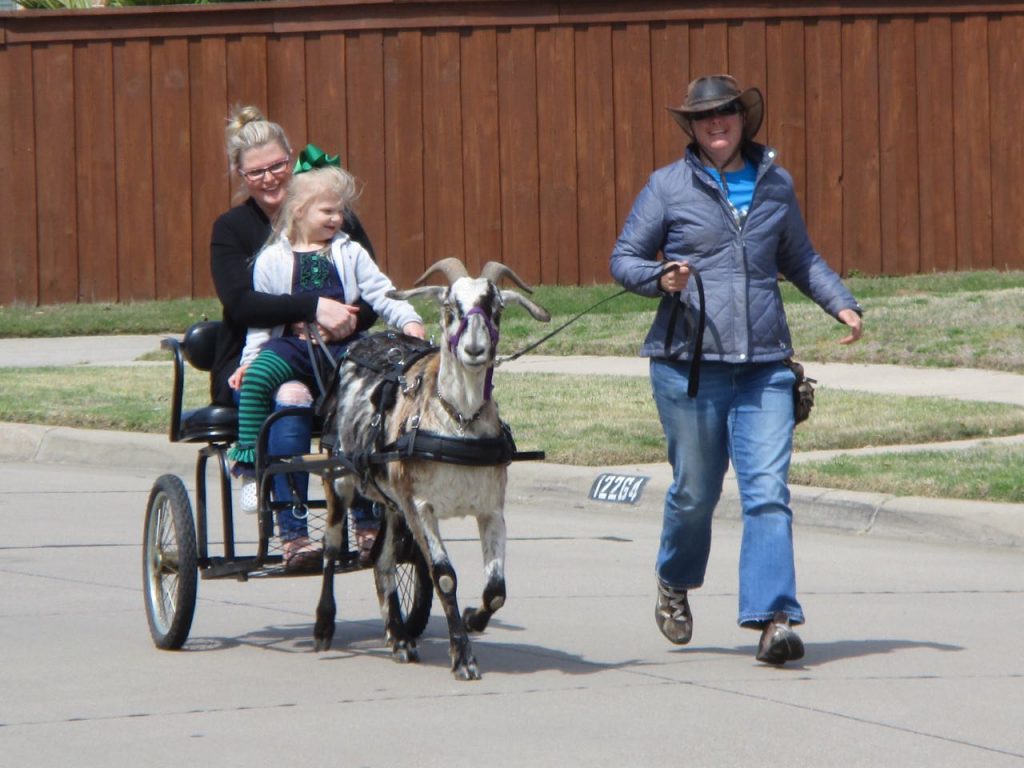 My aunt Marva rode with the youngest, Becket. He didn’t seem overly impressed by the goats or the cart and he did not volunteer for a second ride, but Marva sure had a lot of fun! 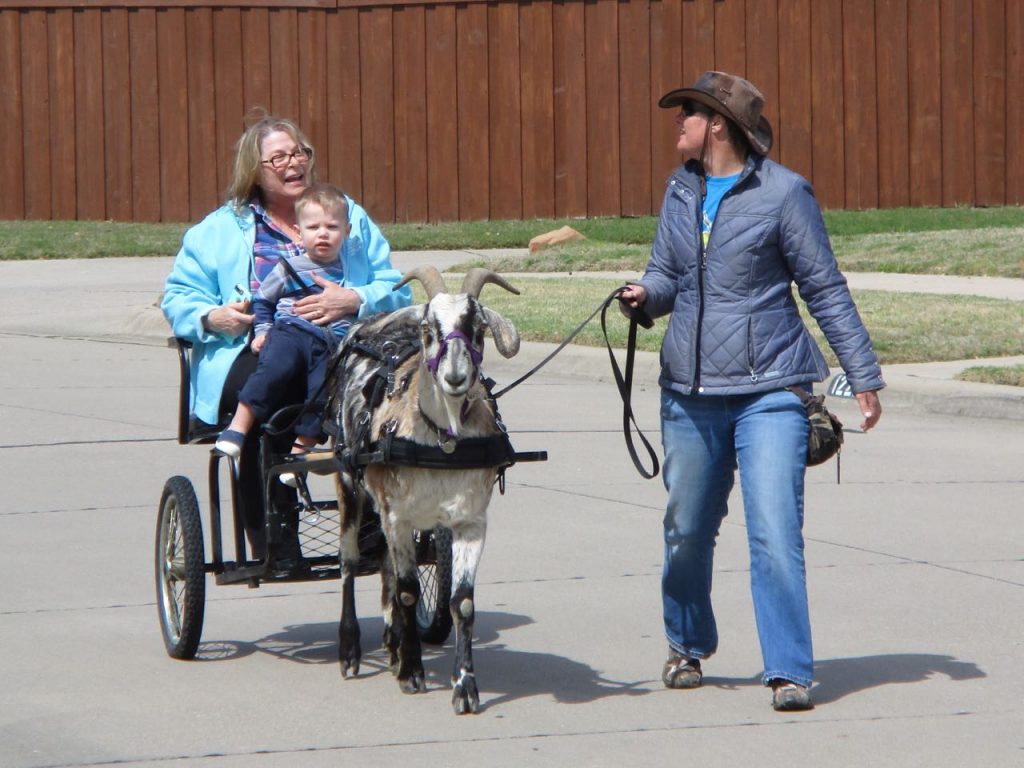 Next day Phil and I visited Billie and Dan (my dad’s mother and stepfather) who live in downtown Dallas. They were really looking forward to seeing the goats, and we originally planned for all of us to go to the park and take a cart ride, but the weather remained cold and miserable so we had to leave the goats behind so we could all stay indoors. However, Phil made up for it by playing just about every fiddle tune he ever knew. Several other folks from the residence came out and enjoyed the music with us as well. It was a toe-tapping, hand-clapping good time! 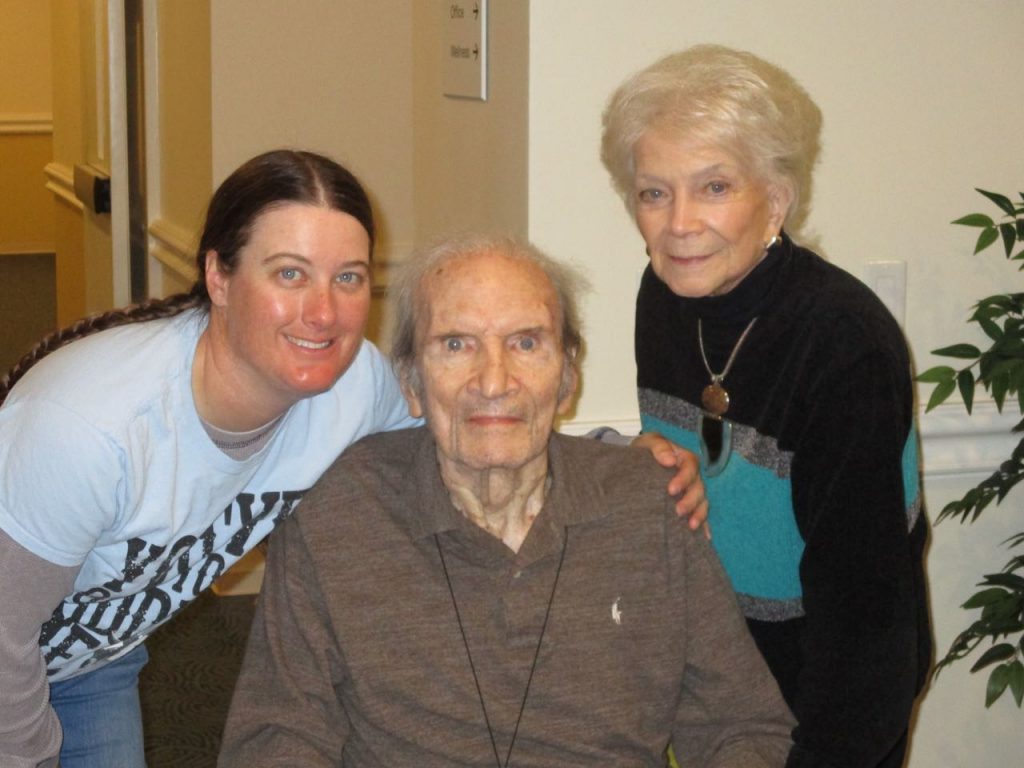