It’s been raining and raining all this past week, but the sun finally came out and I went wild with the baby goat pictures. They’re all too cute for words right now!

Oh, and I have not captured any photos of this, but Petunia has been the BEST babysitter ever! I frequently see her laying in a shed with all the babies while the other does are out to graze. She especially loves her nephews, Sledge and Hammer, and she’ll go out of her way to rustle them up for play time. The other day she was up on the water trailer with them, and she was letting them jump all over her while she gently butted heads with them. She likes to let them “win” the fights, then she turns the tables and will push them off the ledge (as long as it’s not too high), then let them run up and jump on her again. She’s definitely the “cool aunt” that every kid wants!

Today we had a great time watching Petunia, Delilah, and Hammer play on the goat castle. Hammer and Delilah have a funny relationship ever since three days ago when Delilah climbed up our rock retaining wall and met Hammer standing on the ledge up top. He head butted her and when she went to get him back, she lost her footing and slid down to the bottom. Hammer’s little baby hackles stood straight up and he strutted across that rock wall like he was all that and a bag o’ chips! Delilah jumped up the wall and pushed him back, but he hasn’t forgotten his victory and has been challenging her to duel ever since. Delilah is bottom of the pecking order, and I think she sees this as her one opportunity to beat someone up–even if he is just a baby. When she and hammer started going at it on the goat castle, Petunia jumped between them and laid into Delilah as if it were her own baby. Delilah knows it’s not Petunia’s baby and she fought right back in an effort to get at the little squirt. Nubbin was oblivious to the whole drama, and Hammer kept jumping back and forth between the two does, thrilled to be the cause of all their ruckus. 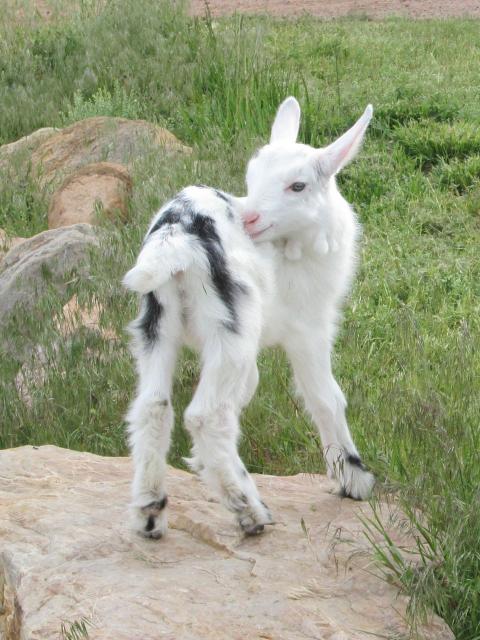 Why, it’s Tigerlily! After a week of nonstop rain, she was thrilled to finally be able to go out and explore this big, new world! 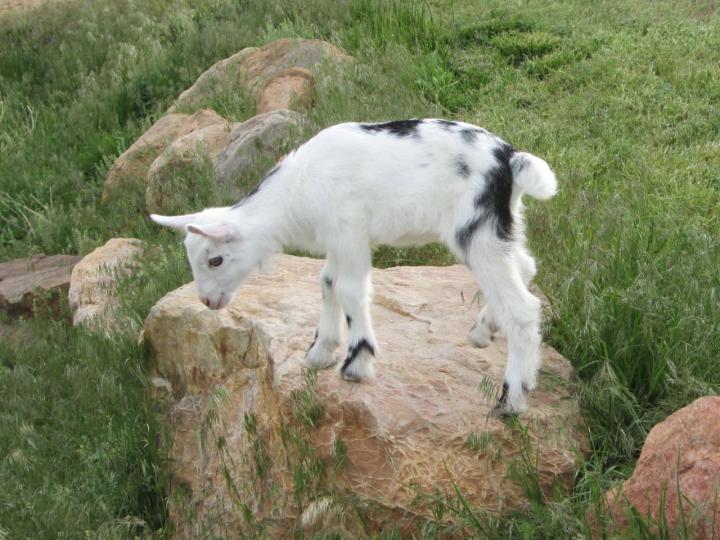 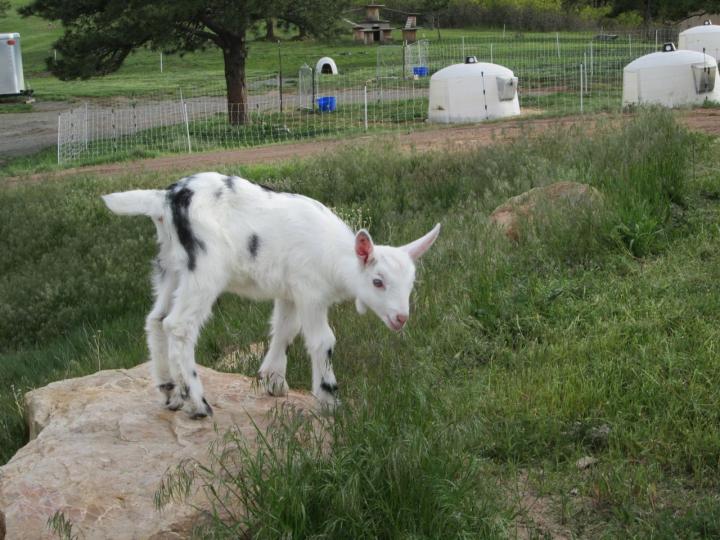 “I’m off to look for adventure!” 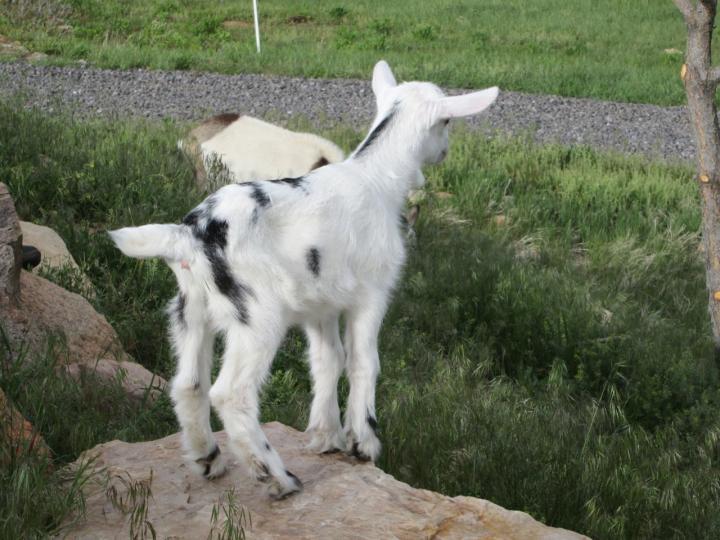 “The big boys are so much fun! I want to play!” 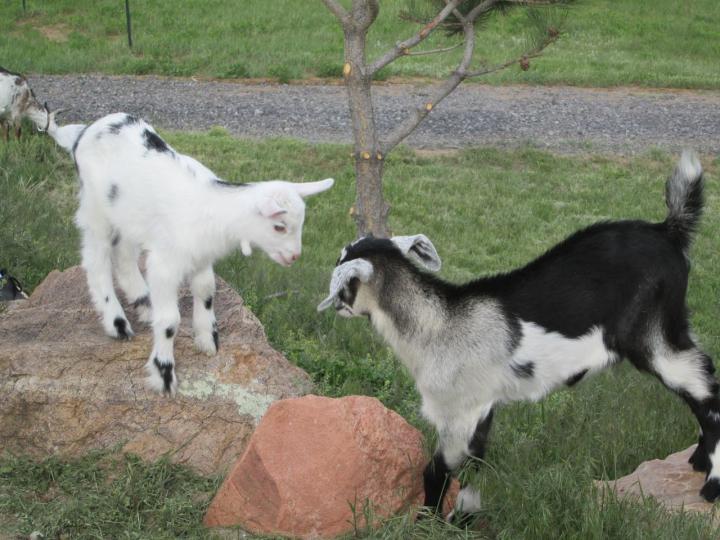 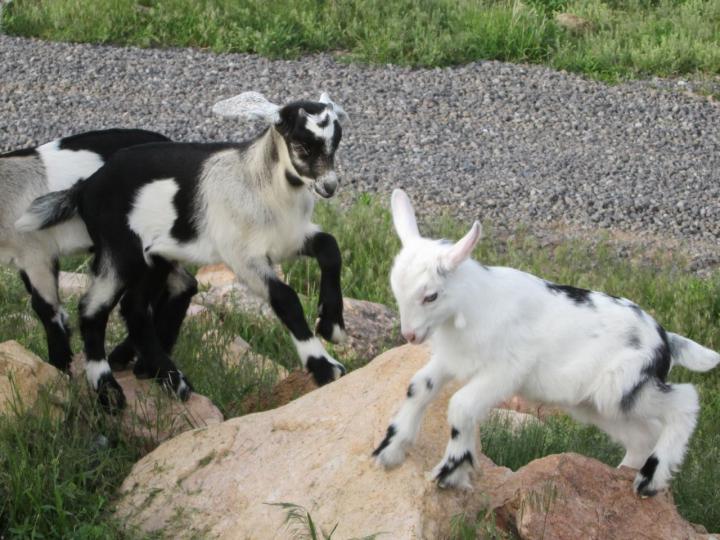 Tigerlily has no fear of getting rough-and-tumble with Sledge and Hammer despite their larger size! She’s a bold little thing! 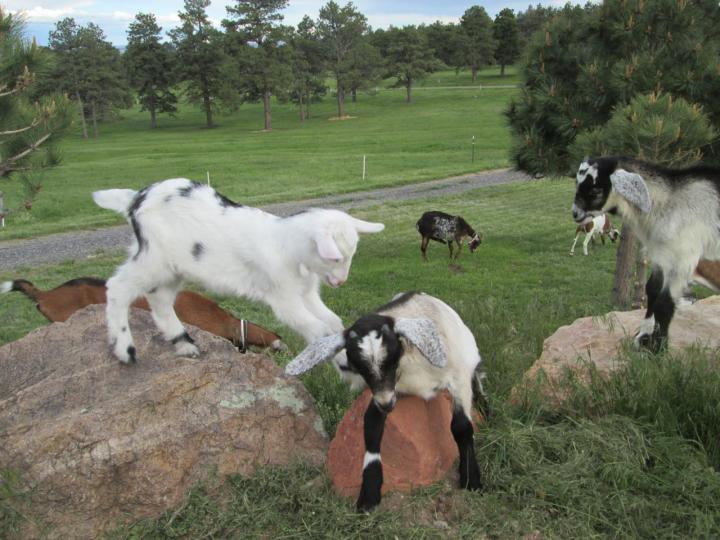 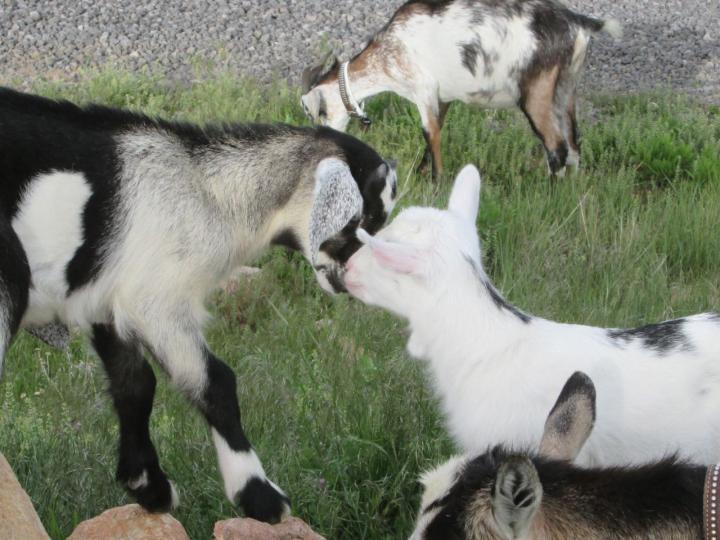 Jezebel says, “Enough of this! You stay away from those boys! They’re nothing but trouble!” 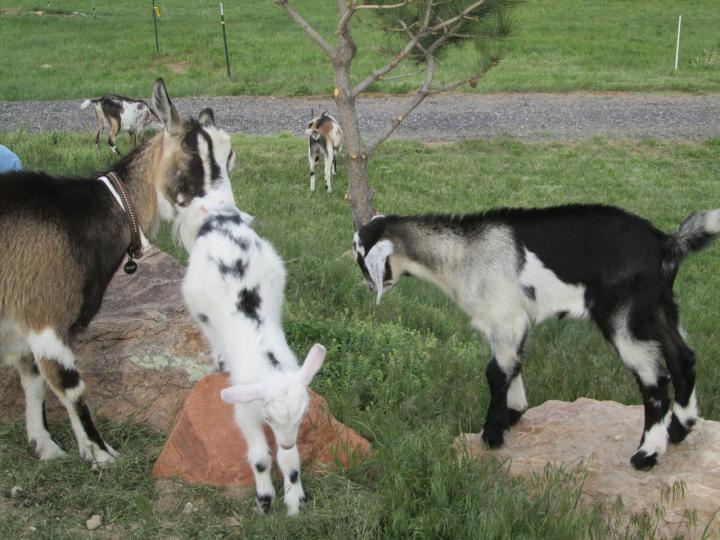 I’m afraid poor Tigerlily is leading a pretty sheltered life so far. You know what they say about mothers who start too late in life… they act more like grandparents than parents, and that fits Jezebel to a T. The poor baby is constantly getting herded along, micromanaged, and told “Don’t touch this!” “Don’t play with that!” “Stay away from them!” “Sit in that corner and don’t move!” She desperately wants to play with the other baby goats, but Jezebel invariably herds her away from them or bites their ears if they come in for a closer look. I actually had to hold Jezebel out of the way to get these brief shots of Tigerlily playing with the boys. In fact, in nearly every shot of Tigerlily, I had to crop Jezebel’s head out of the picture, since she was constantly coming in to sniff, lick, and check for problems before pushing Tigerlily out of the action. She doesn’t want anyone near her baby, including me and Phil. The poor kid is going to end up a social pariah if this keeps up! It’s a good thing the little baby has a mind and legs of her own, and she’s fast learning to use them. Tigerlily is going to learn real soon that if she runs quick enough, mama won’t be able to keep up.