I’ve had a rough time with Jet’s unexpected death. I’d marked my calendar ages ago for a goat packing trip the last of July/first of August, but when Jet died just a few days before I was set to leave, I felt like canceling. However, I’d been looking forward to this trip for months and I had other people counting on me to be there. So although I didn’t feel like going, I decided that it would be good for me to get out and have a few days away from home doing something completely different. I’m so glad I went…

Last fall, Alexa Metrick of Pack Animal Magazine contacted me and several other women to propose an “all-animal pack trip” for summer 2018. The original idea was to have packgoats, llamas, alpacas, a yak, and possibly a burro on the trip. In the end, only the packgoats and llamas represented, which turned out for the best because of the limited parking available at the trailhead.

Our crew was scheduled to meet at 10:30 Tuesday morning, July 31st at the North Fork Lake Creek Trailhead (there’s a mouthful!) on the edge of the Mount Massive Wilderness Area, situated between Twin Lakes and Aspen, Colorado. I arrived exactly on schedule and Alexa showed up a short time later. Our llama buddy, Gayle, however, was delayed several hours so Alexa and I ate lunch and spent time exploring the trailhead area.

Gayle showed up around 2:00 and it took her almost two hours to unload the llamas and gear and get packed up, so we were fortunate that Alexa’s plan for our first campsite was only about two miles in. Alexa had no pack animals, so Gayle and I divided her gear among the two llamas and my two packgoats. Finn carried Alexa’s clothes and Sputnik got the tent.

Finn and Sputnik carried the gear, but Petunia came along to provide fresh milk on the trail so we could dine in luxury. She carried a small pack containing her milking things, which included a couple of empty bottles, milk strainer and filters, disinfectant wipes, disinfectant spray, clean cloths, and an inflatable cushion for me to sit on while milking. 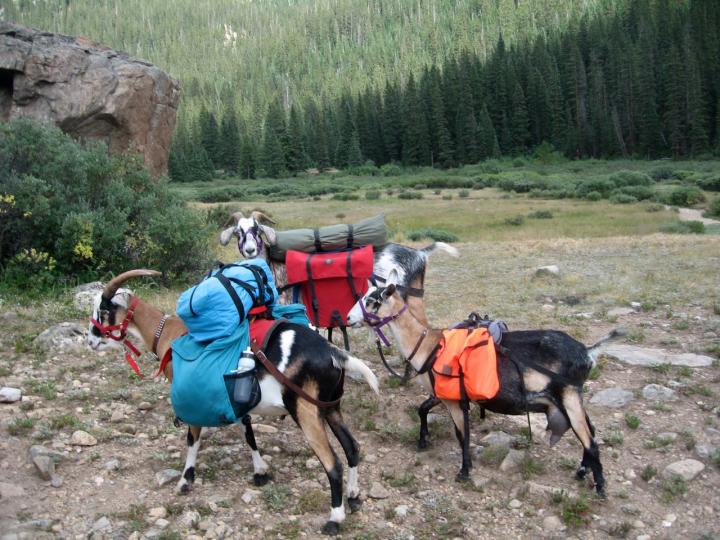 Sputnik was so boss on this trip! His panniers weren’t huge, but they were heavy because they contained the food, first aid and survival kits, and other assorted dense and oddly-shaped items. I slipped a couple of lightweight plastic trash cans inside his panniers to protect his ribs from the hard-sided things in his pack. 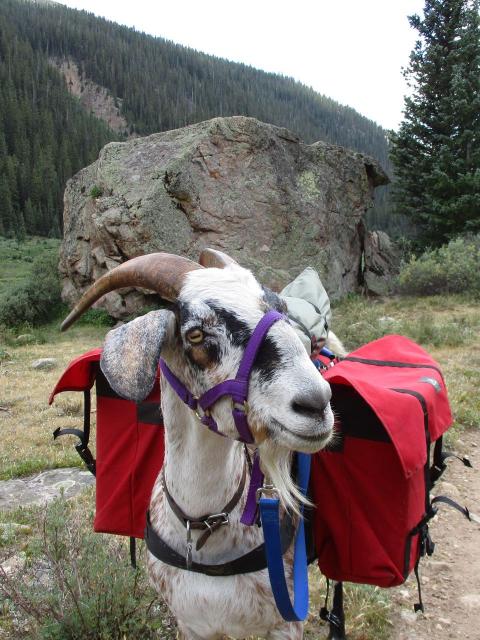 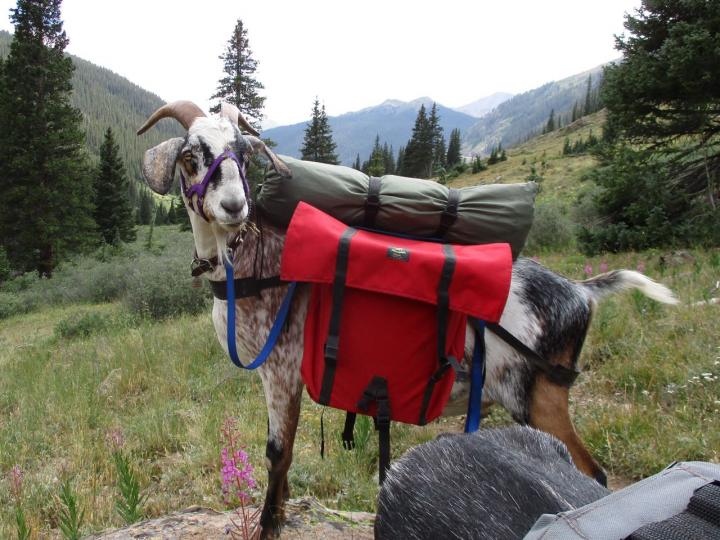 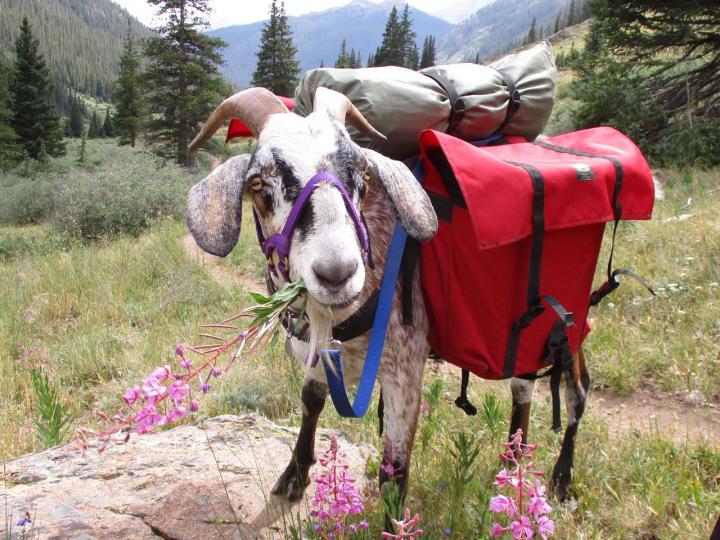 This is Gayle with her llama, “Spot”. This was Spot’s first experience on the trail. She’d been saddled at home and given very light weights to carry, but she’d never actually been packed and she took a bit of persuading to stand for being loaded. She also needed a good bit of encouragement to keep moving along the trail the first couple of days. 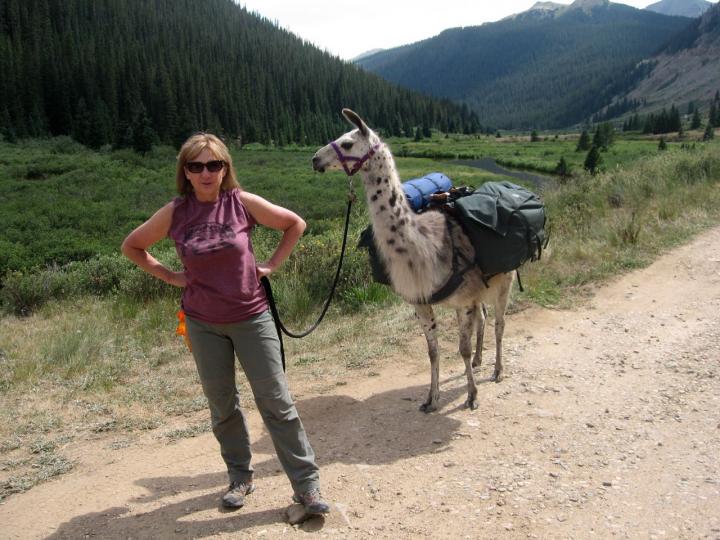 My crew had never really packed either for that matter. Finn and Sputnik have always had it easy. Our packs have never weighed more than about 30 lbs. tops, and I’ve nearly always traded the pack between them since we’ve rarely needed two full loads of gear. This time they had to carry full loads of about 50 lbs. each and they didn’t get a break. I have to say, they really stepped up to the task. They never acted like it bothered them or slowed them down. 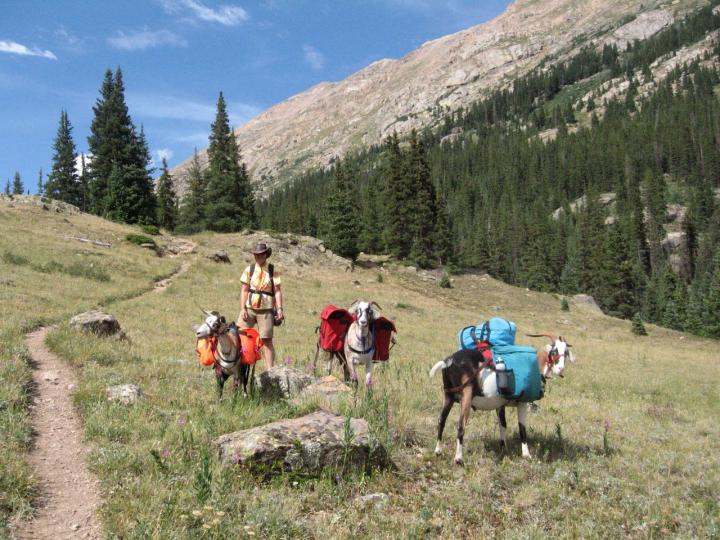 Finn’s pack weighed about the same as Sputnik’s but it was much bulkier since he carried the sleeping bag, clothes, and other fluffy items. I brought winter gear since we planned to be near timberline for most of the trip, and I was glad to have it at night! 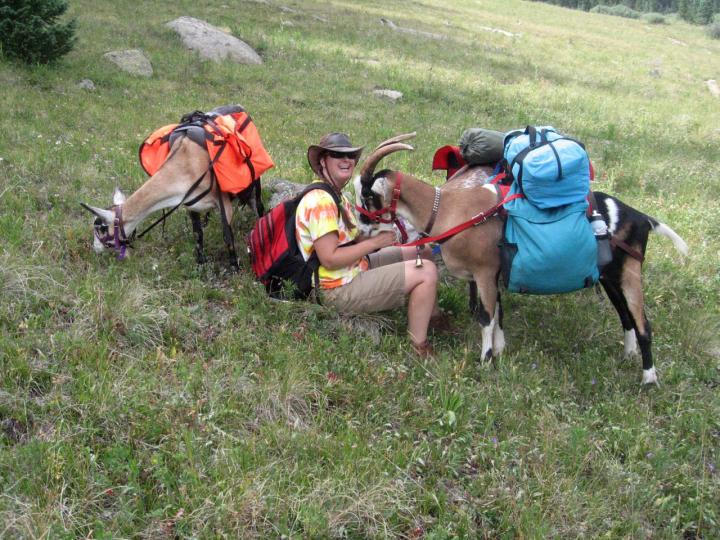 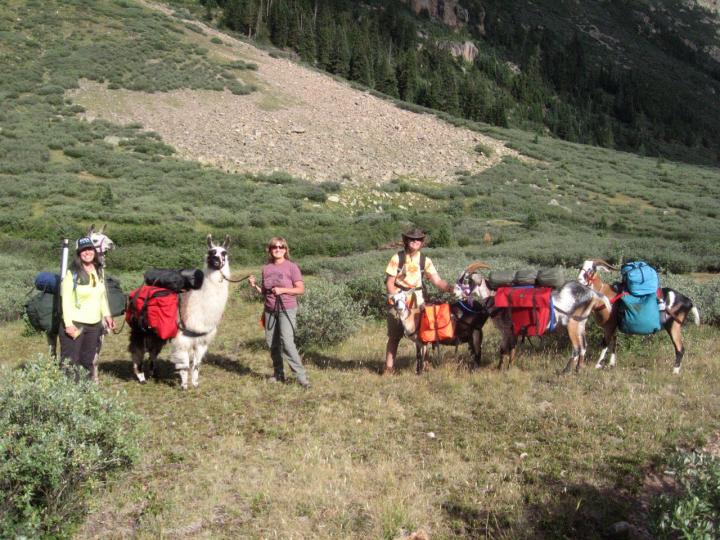 There was quite a lot of thick brush on the lower part of the trail and I was thankful we weren’t tackling it at the height of tick season. The goats didn’t mind their panniers scraping between bushes. 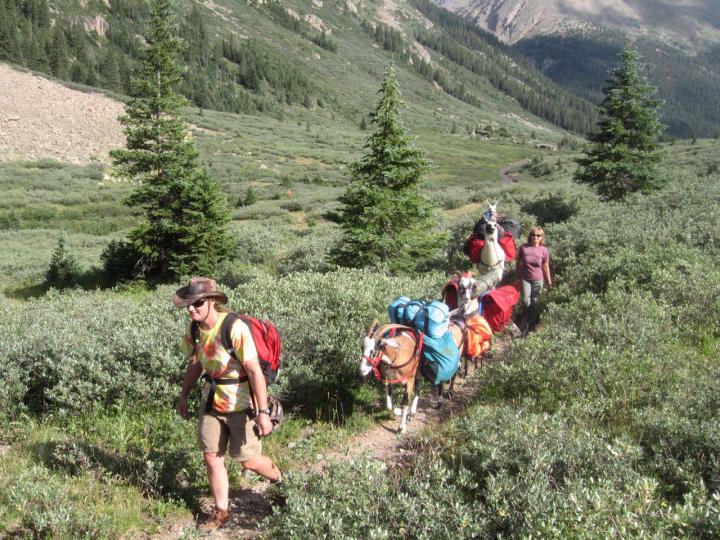 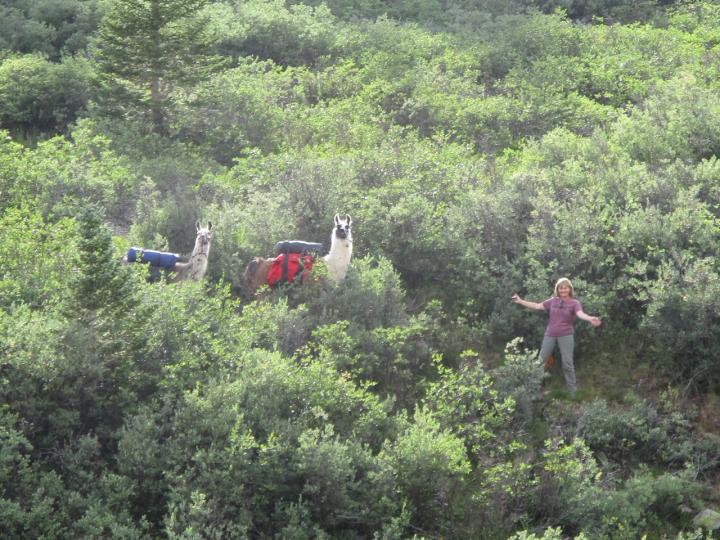 The first day was the hottest, and my goats had spent most of it sitting in the sun while we waited for Gayle so they were quite thirsty despite the easy work load. 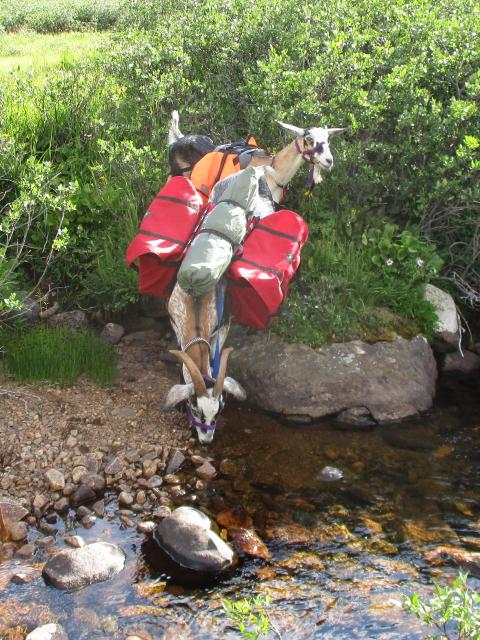 You know you’ve found the perfect campsite when beams glow down on it from heaven. 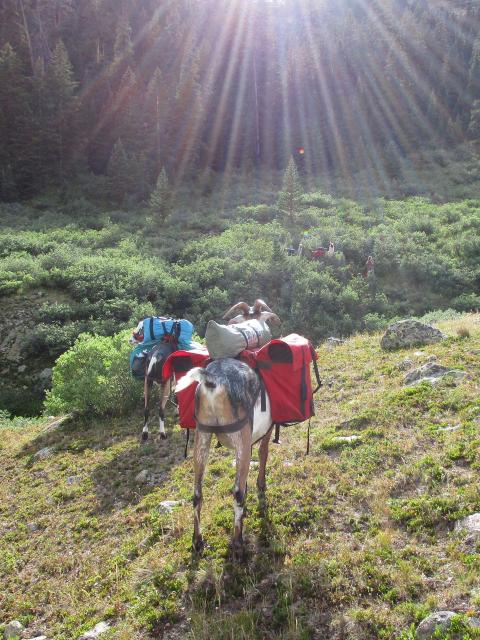 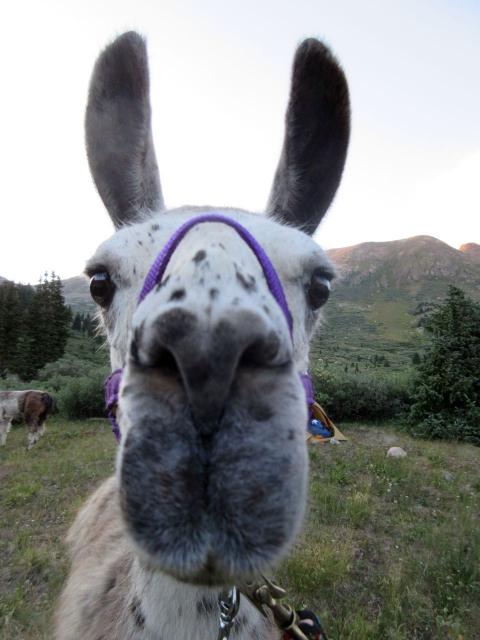 I worked out a pretty good system for milking on the trail. I’d tie Petunia to a bush so she could eat, plop my inflatable cushion on the ground next to her, set my milk strainer in an empty bottle, then milk straight into it. 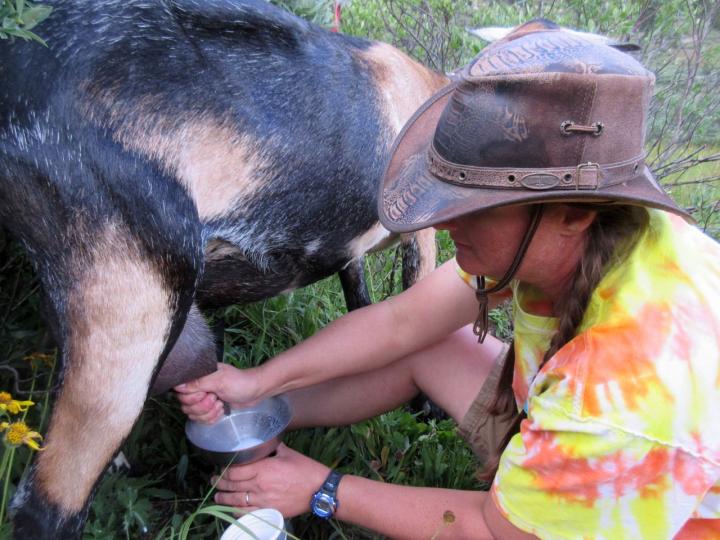 I chilled the milk overnight by placing it in a creek. I don’t drink coffee but I love my milk in the morning. It’s filling and it gives me energy to last for several hours, which is good for someone who isn’t much of a breakfast eater. 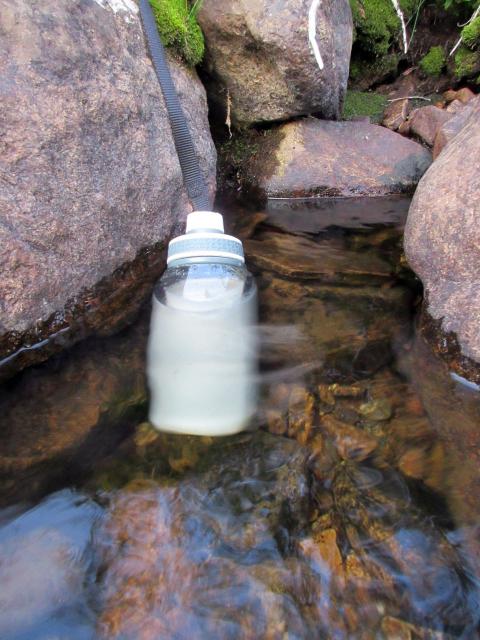