It was uncharacteristically cold and wet for this time of year in Lake City. It snowed the da after the Uncompahgre climb and we huddled in our cabin while the goats huddled in the trailer. But Saturday morning we took the goats for one final muddy walk around the park before we left town. They were thrilled to be out of their trailer despite the wet. We used a few “found” obstacles around the park for training.

Phil was just sure I’d never get Sputnik to jump through this swing. For a while I thought he might be right. Although not high, it’s narrow and it moves when bumped. But Cuzco used to jump through swings so I took a few minutes to work with Sputnik on it. It paid off. 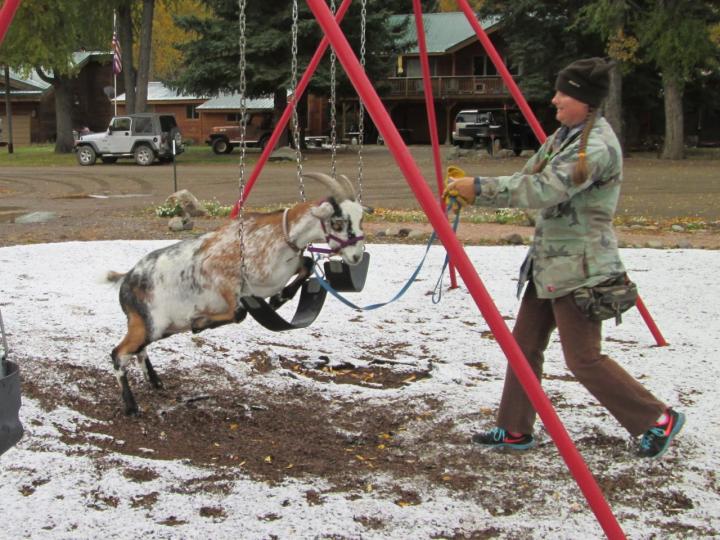 And then there was this bicycle rack. A fun obstacle with width as well as height. 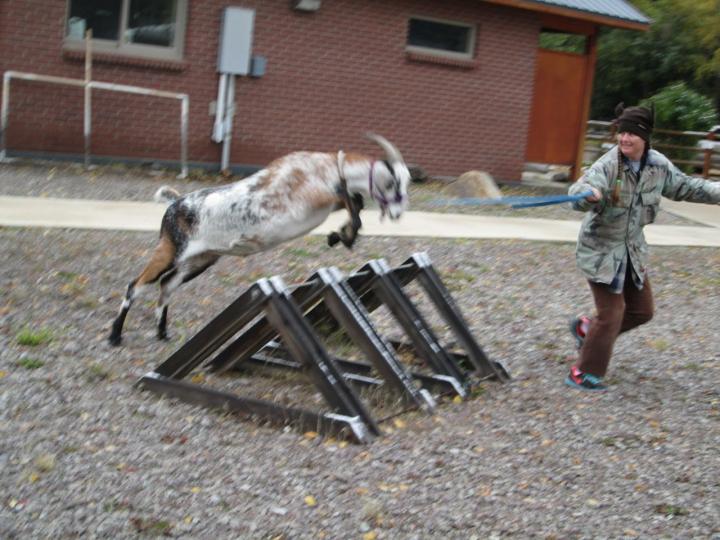 The most difficult was this weird piece of equipment. It was about 3 1/2 feet on the high side–higher than the truck tailgate which Sputnik only recently learned he could leap onto with a running start. I started him on the lower end of it using the “load up” command. Then I worked him up to the high end. He was quite proud of himself after leaping confidently onto the high side of the obstacle several times. 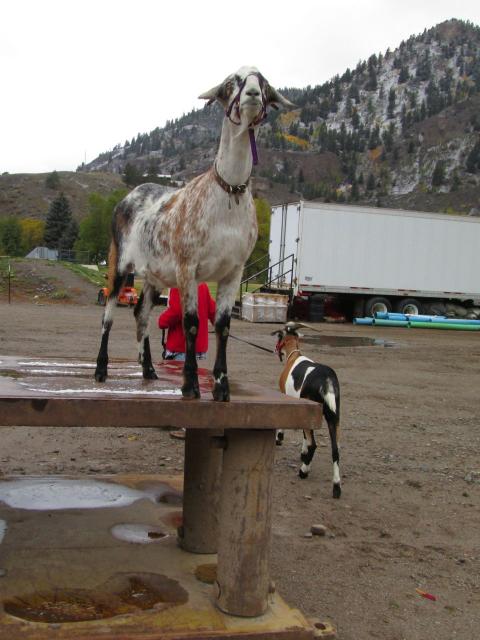 This front end loader attachment was a poser for Sputnik. It was a bit high and a bit wide, but mostly it looked strange and had a shallow puddle on the landing side. 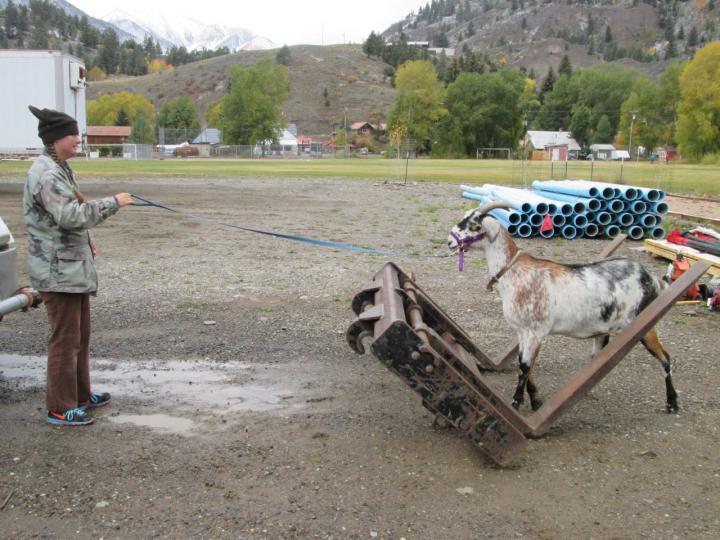 I gave him plenty of time to look it over. 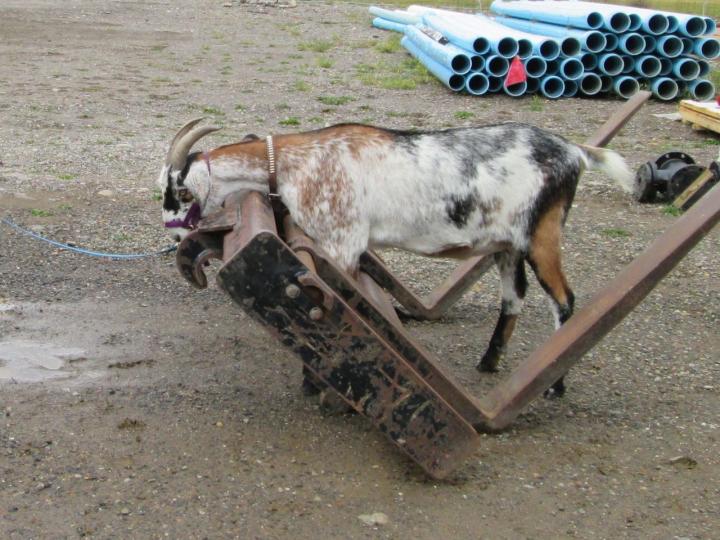 I would have let him climb up and scramble over if he preferred. The goal was to cross the strange object, not necessarily jump it. 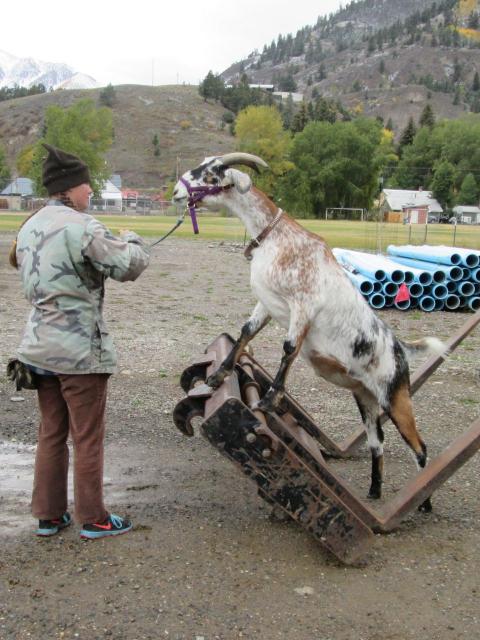 In the end he opted to jump. “Good boy, Sputnik!” 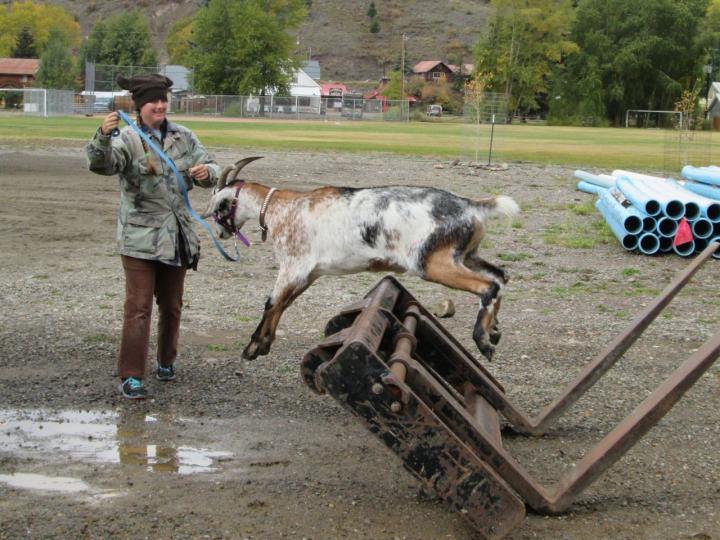 Aside from being fun, the goal of these little games is to teach trust and obedience. It’s particularly important for Sputnik because he does not possess Finn’s natural, graceful agility and self-confidence. Sputnik is strong and athletic but he doesn’t know it. Every time I work him over a new obstacle he gains confidence in his ability and he learns to trust me when I ask him to try unfamiliar things. It’s making him a very steady and dependable trail partner–something I was not sure this goat could ever be with his flighty, distrustful personality.

Finn didn’t want to jump this obstacle as long as there was a puddle on the landing side. But he didn’t hesitate to climb over it. 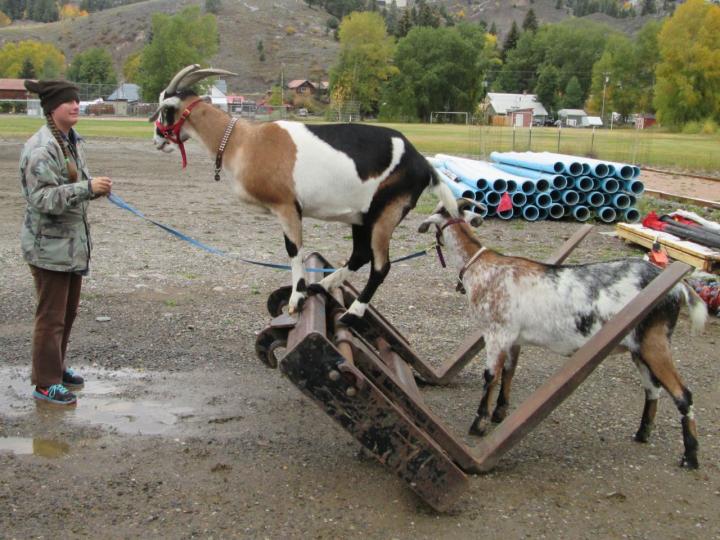 Finn and Phil climbed up the “Lyn Lampert Memorial Boulder”. Lyn is a friend of ours who still lives in Lake City. We were able to meet up with him and a few other old friends on this trip. 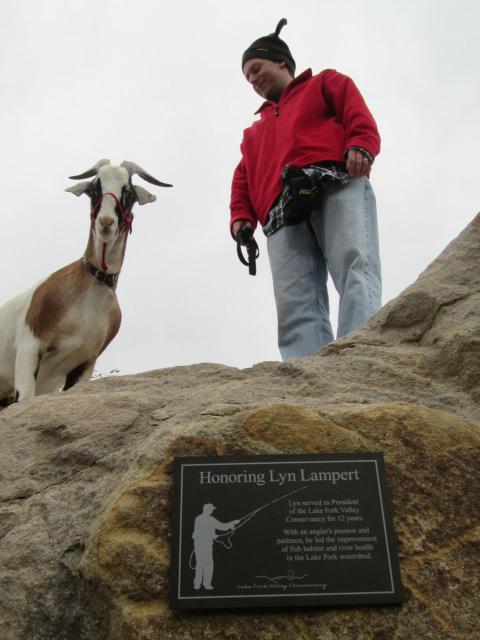 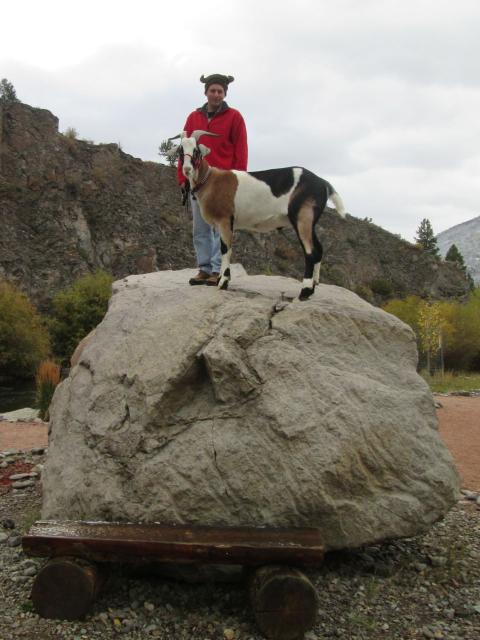 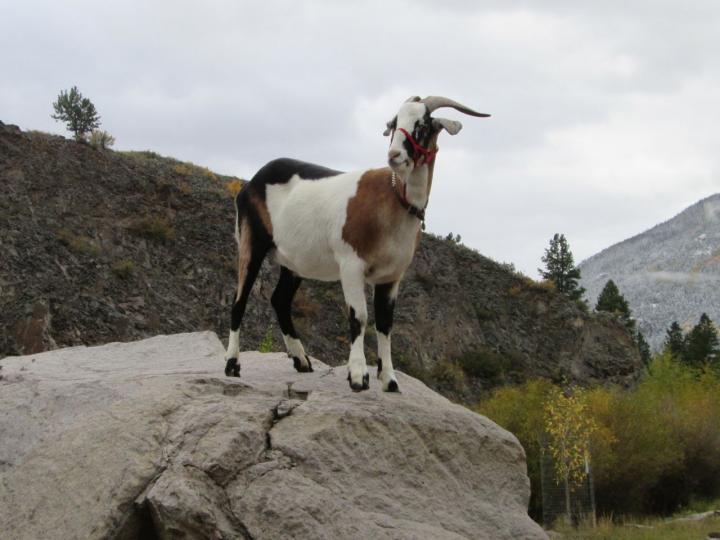 Phil and I also practiced having our goats walk along some balance logs. Sputnik wouldn’t climb on the high one. It was slick and he much preferred to eat it than walk on it. I notice on water crossings that Sputnik generally prefers to walk through the water than try to cross a narrow log. Finn takes the log bridge every time. 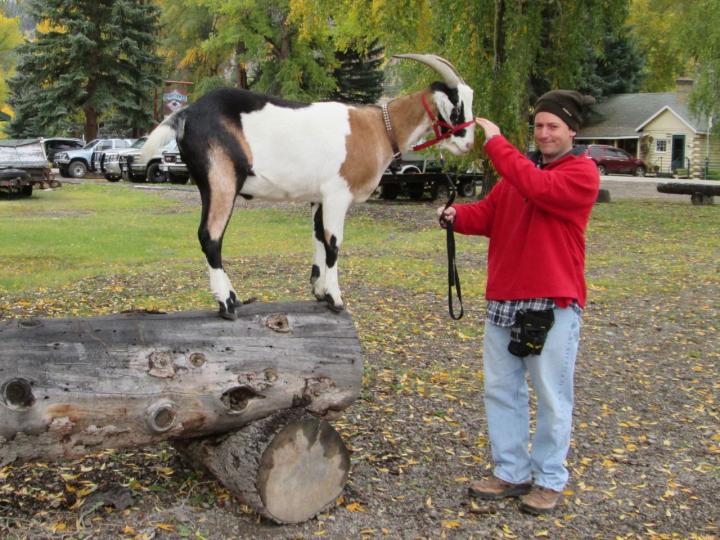 It’s a photo of Finn, but Sputnik and I spent the most time on these narrow balance logs. He’s not very good at them and this was a nice place to practice since there’s no water underneath. If he slips off he has the confidence to jump back up and try again. By the end of the week Sputnik was quite adept at walking the whole length quickly and without sliding off even when the logs were very slippery with snow. 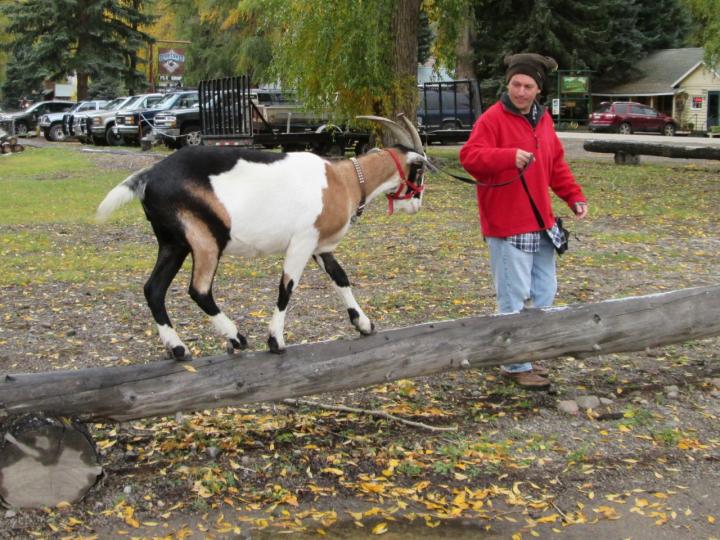