Skeeter was due Sunday, May 3rd and she did not disappoint! On Sunday morning her udder was much bigger than the day before and she was restless. Skeeter and Rita had Tigerlily, our somewhat aggressive herd queen, backed against a wall. Tigerlily was on the defence as Rita and Skeeter pounded some fear into her. “We’re going to be mamas now and you need to respect us!”

On Sunday afternoon I could see that Skeeter was separating herself from the herd and pawing nests into the dirt. Around 4:00 I went outside and Finn came up to the porch and baa-aa-ed at Phil and I with an intense look on his face. I decided I’d better go look for Skeeter. The entire herd was gathered on top of the hill behind our house, staring down into the scrub oak. It was like an amphitheater. All those goats needed was a bucket of popcorn!

Skeeter had picked a hidden spot under the oak brush and her caprine audience was transfixed. Sputnik, Skeeter’s older brother, had distanced himself from the other goats and was standing watch lower down where he was closer and could see her better. Phil went to check on Skeeter while I went to fetch the kidding box. When Phil came out of the scrub oak to inform me of Skeeter’s progress, TinCup followed Phil, baa-ing worriedly as if to say, “You can’t just leave her there! She’s about to have a baby!”

TinCup was right–we couldn’t leave Skeeter there. It was a terrible place to have kids! Not only could I not help her if she needed it, but I could just envision myself crawling out of there on hands and knees with a wet kid under each arm. That wasn’t going to work. Instead I crawled in there and hauled Skeeter out by the collar while she dragged and protested the entire way. She was actually starting to push a kid out when I fetched her! Labor stalled for a few minutes while Phil pulled and I pushed all the way across the driveway to the goat pen. We shut her in the pen, much to the frustration of Skeeter, who thought she had found the perfect place, and to the dogs, who had appointed themselves unwanted midwives. Just as I slipped in through the gate with the kidding box, the first little hooves made their appearance!

First out was a little black and white (cou clair) girl! A few minutes later she was joined by a black sundgau brother–two classic Alpine goat colors. The kids were 8.5 and 10 lbs. respectively and both were active and healthy from the get-go. Skeeter went straight into mama mode and cleaned them up expertly. She also did something I haven’t seen many does do. She reached back and suckled on herself to make sure her milk was flowing. Sometimes kids have trouble getting the first milk because of the plugs blocking the ends of the teats. Skeeter wasn’t going to let that happen to her kids! 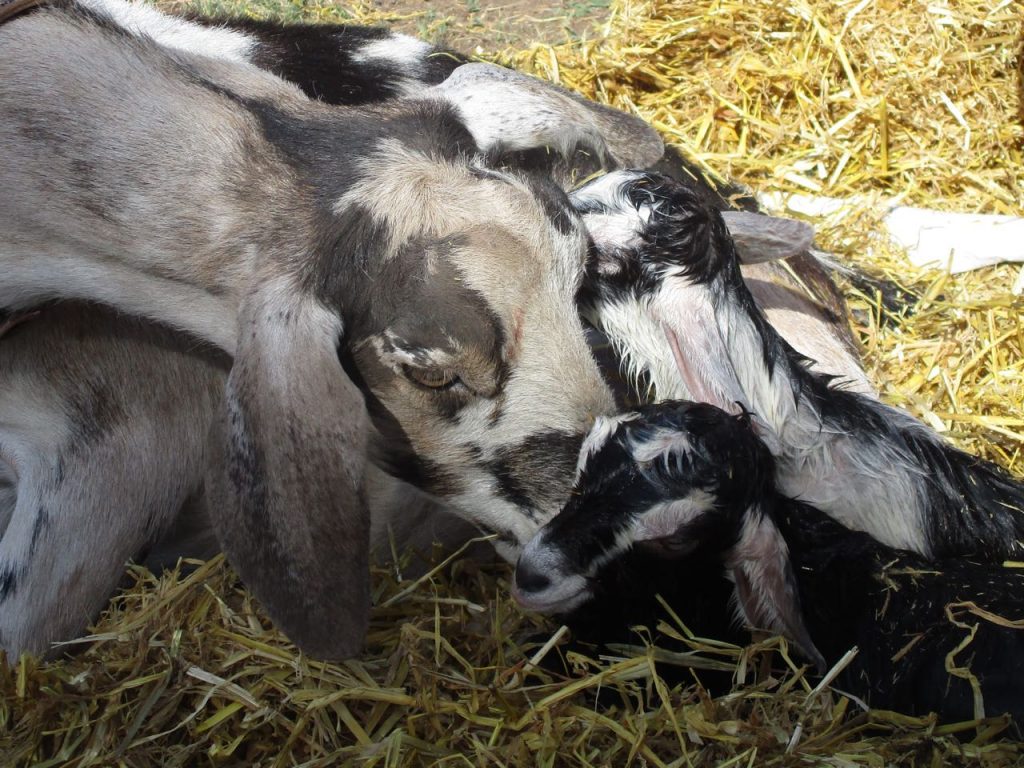 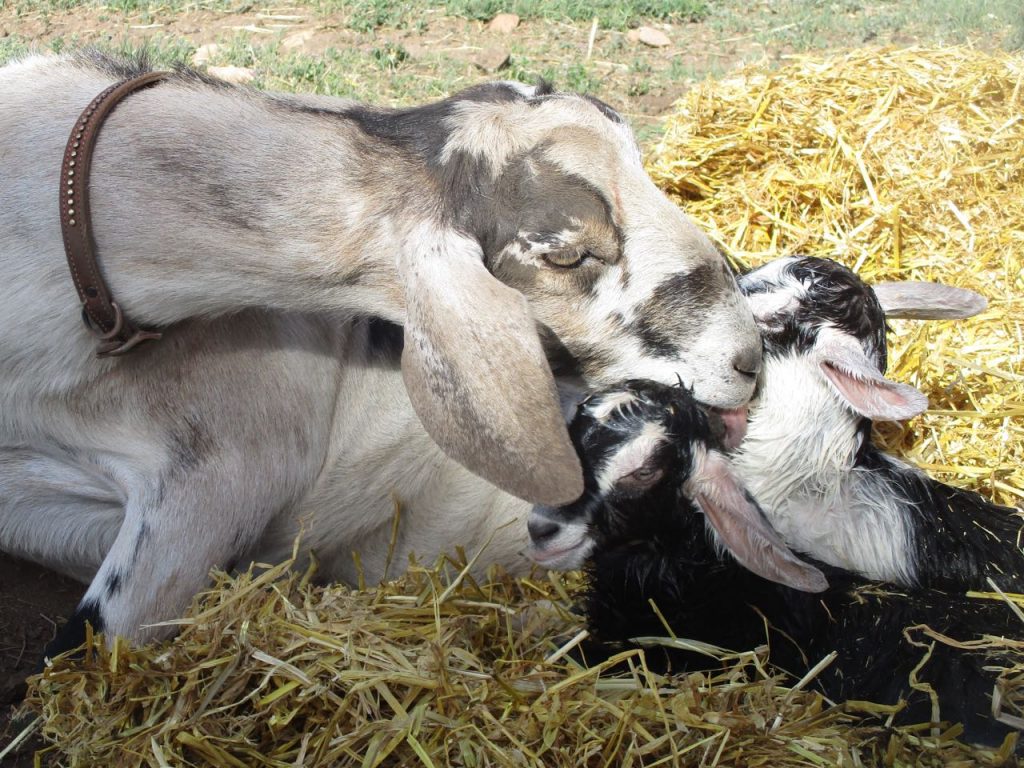 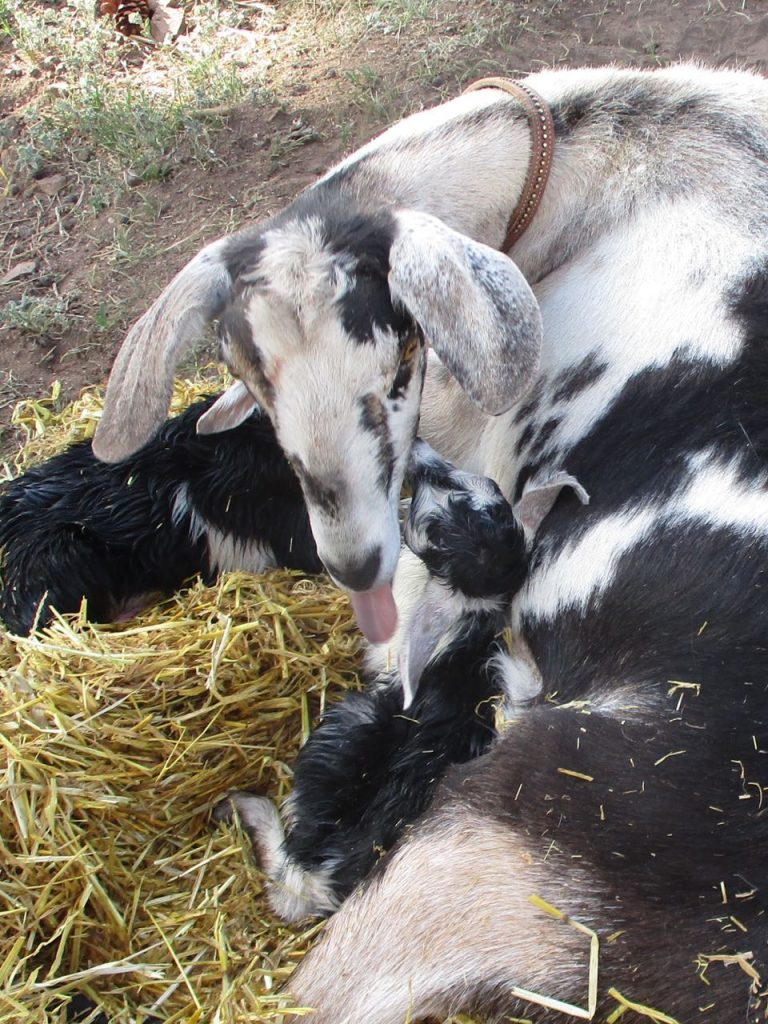 I love how these kids blend right in against mama’s black and white coat. Doesn’t she look proud! 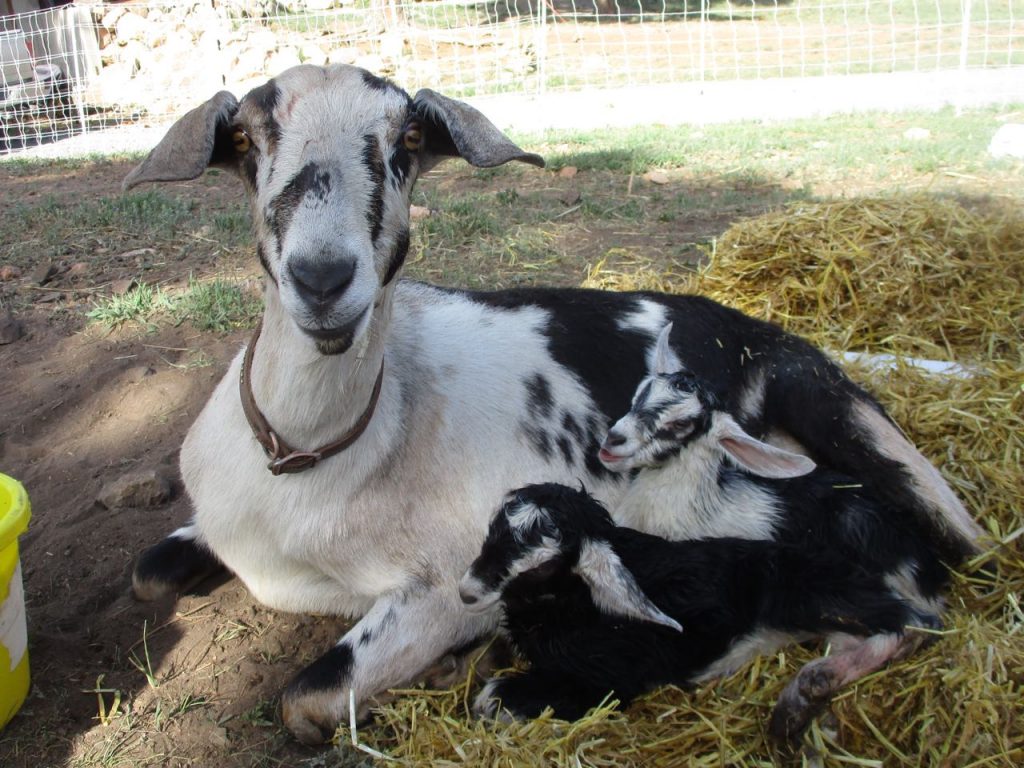 We’re thinking of naming the little doe “Butterfly” because of the marking on her face. 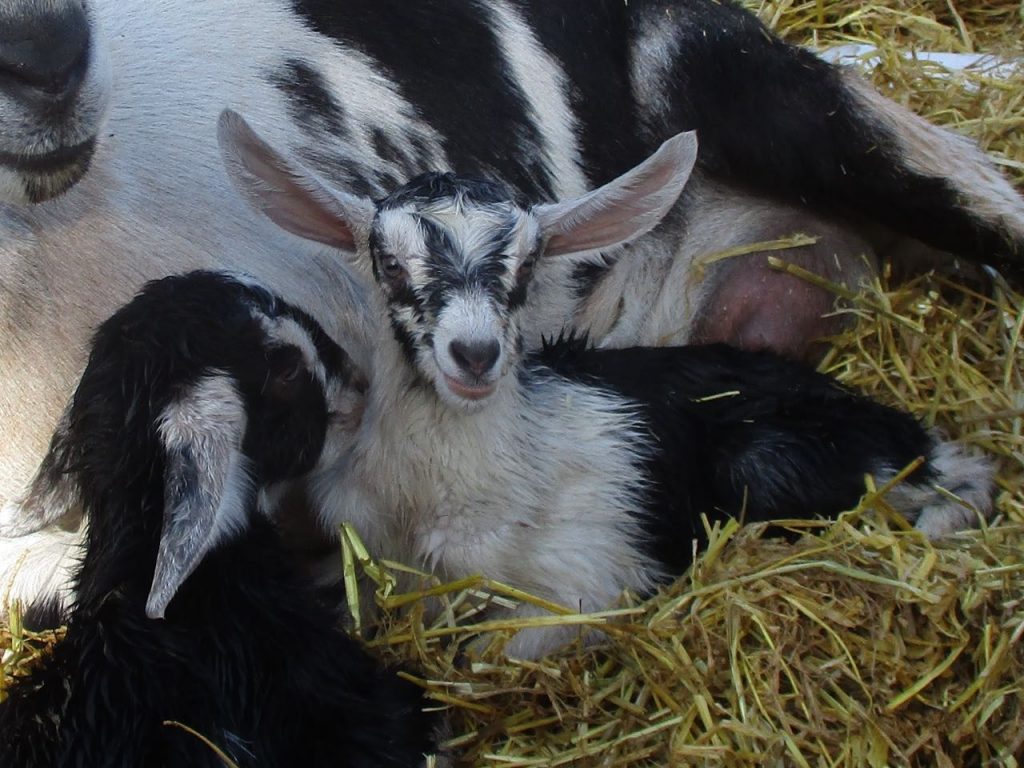 First drink. These kids were up and at it in no time! I’m so proud of this beautiful, capable new mama. She did everything by herself with no fuss or nonsense and she’s attentive without being overprotective. But she learned from the best. Petunia was an outstanding mama, and Skeeter reminds me so much of her. In fact, ever since Sunday I keep slipping up and calling her Petunia and Phil keeps correcting me. “Sorry, Skeeter. Just take it as a compliment!” 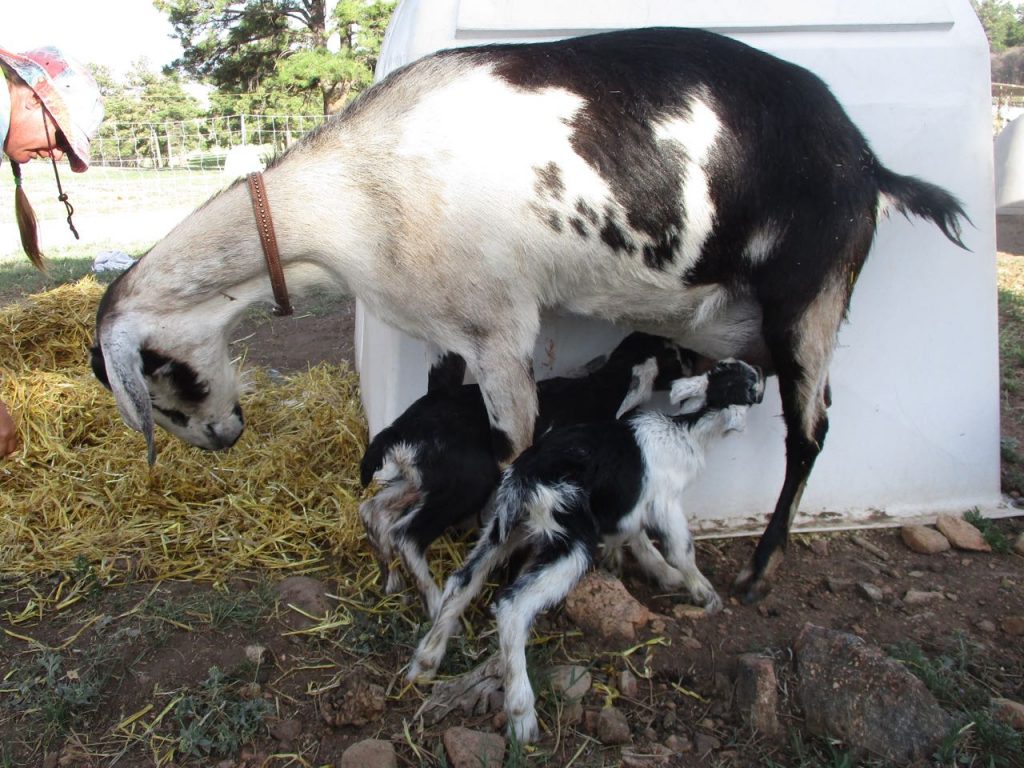 Emma takes riding lessons with me and I called her mom just as the kids were being born. I was hoping they could be there in time for the birth, but Skeeter was too quick for them. She was almost too quick for me! But Emma was able to help dry the kids off. 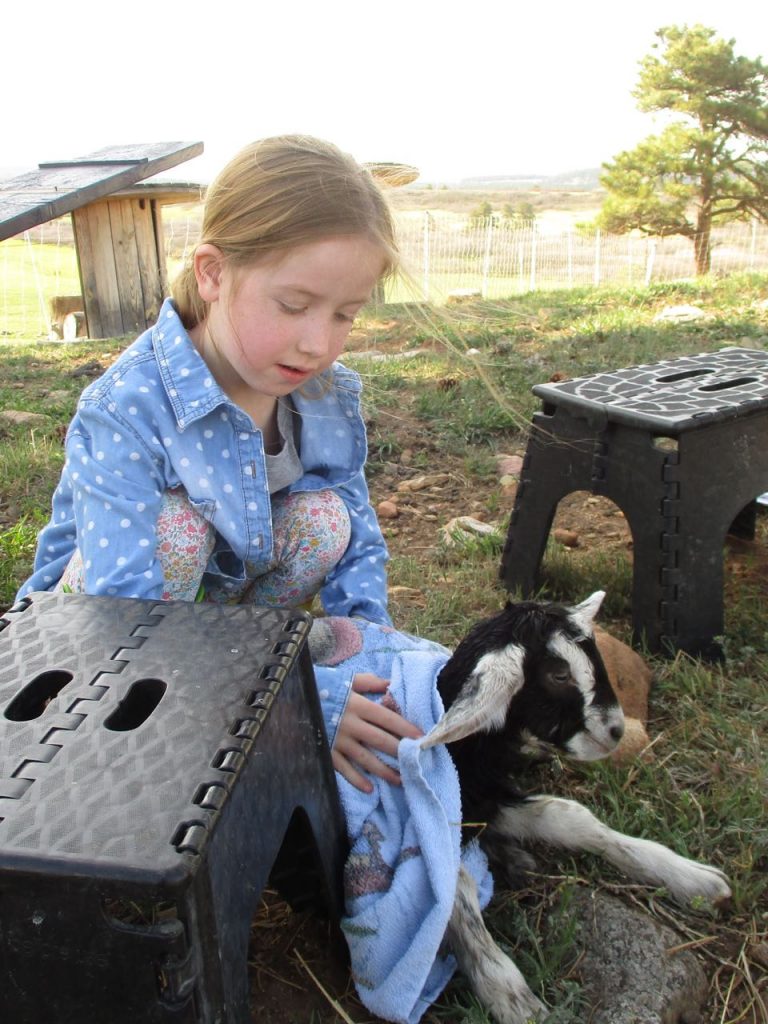 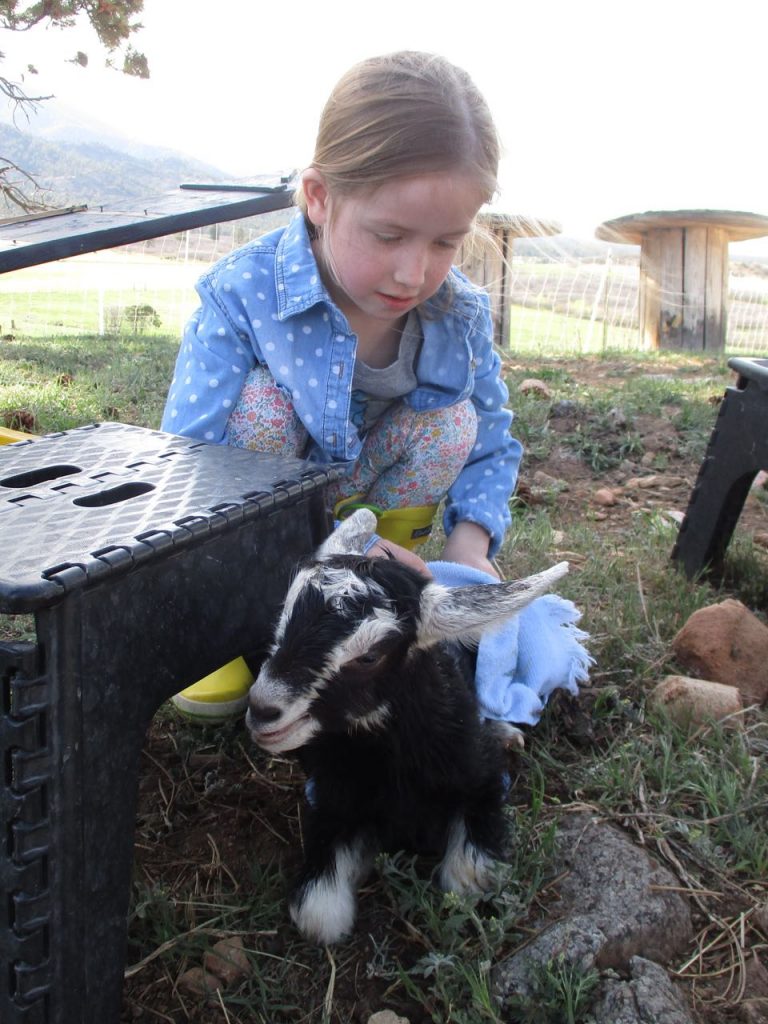 Skeeter did not seem to mind letting a stranger handle her babies. In fact, she seemed rather proud. 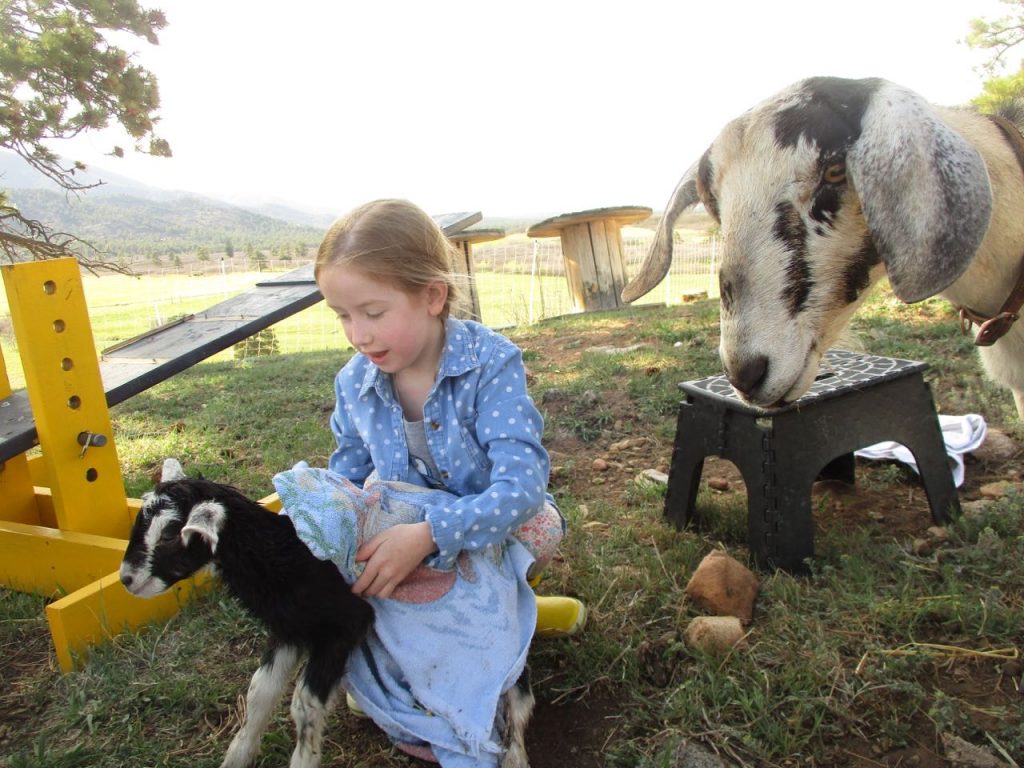 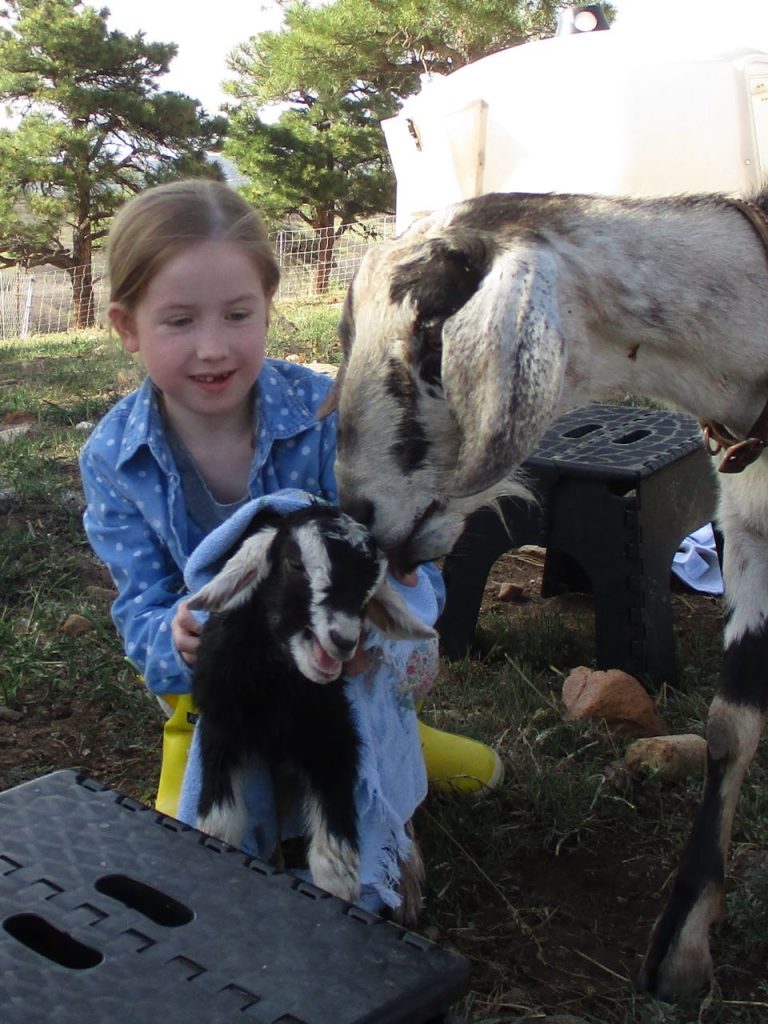 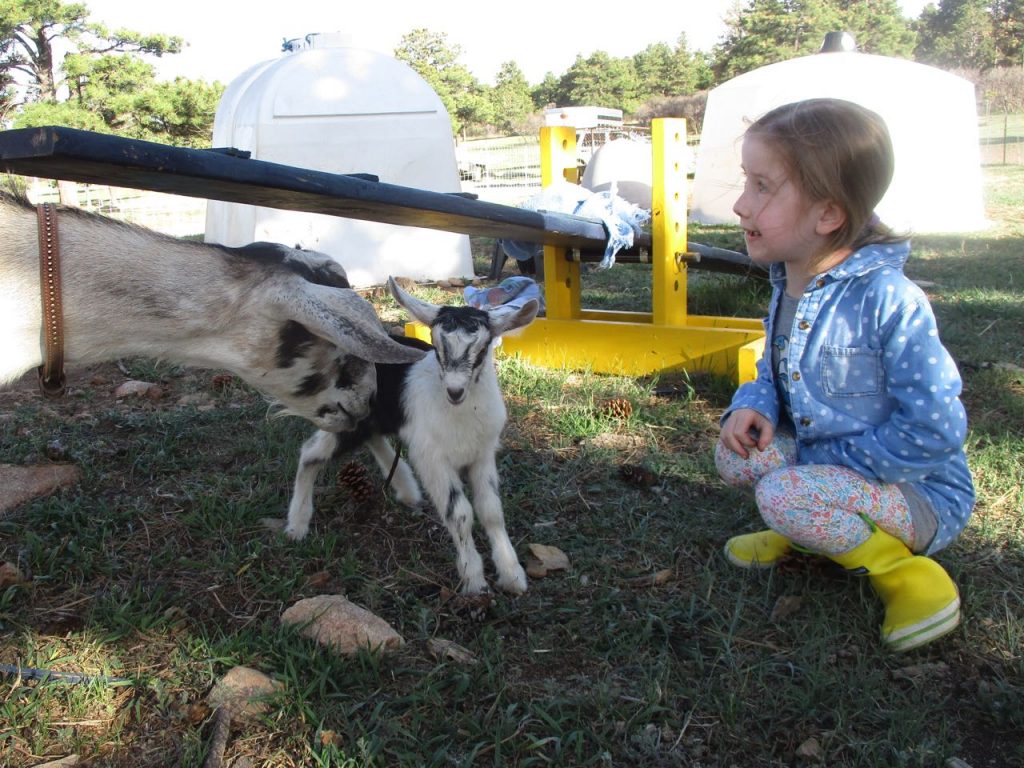 Another name idea for this little gal is “Firebird.” Her face marking is taking on more of a phoenix or firebird shape now that it’s dry. We’ll try some names out over the next few days and see what sticks. 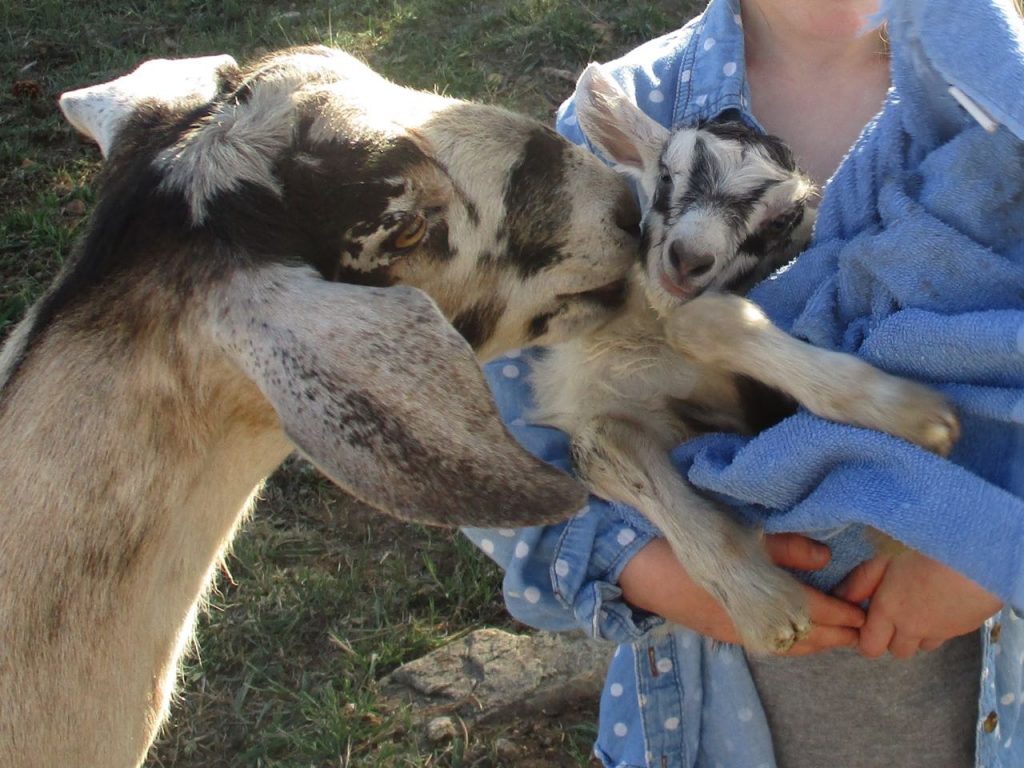 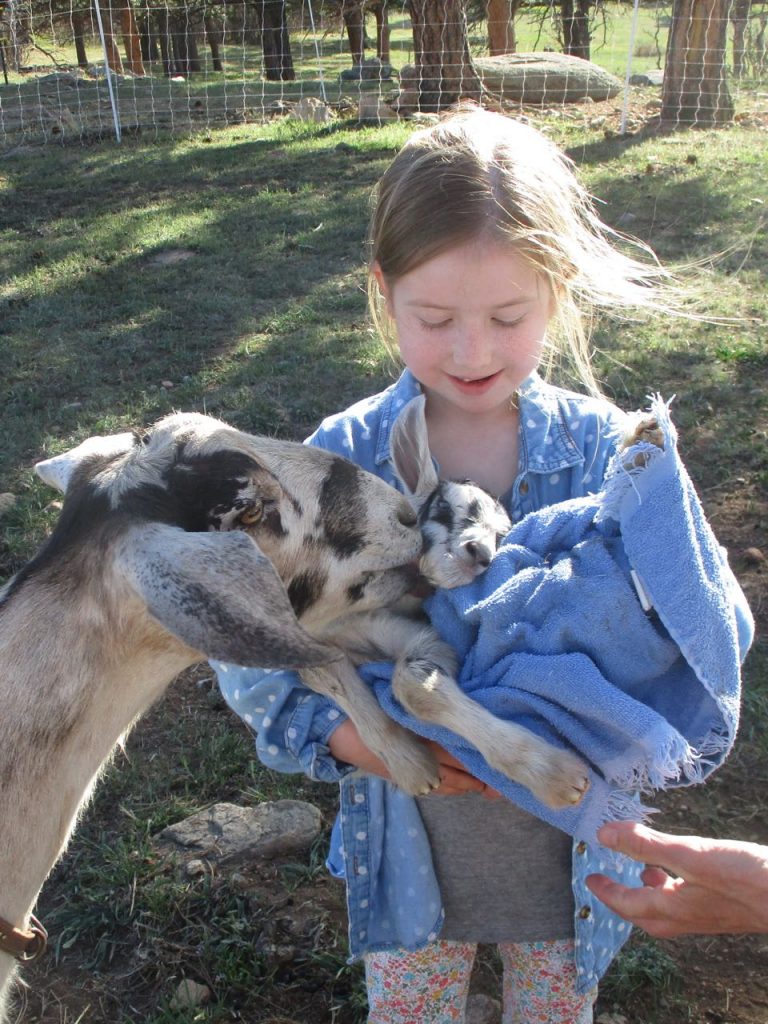 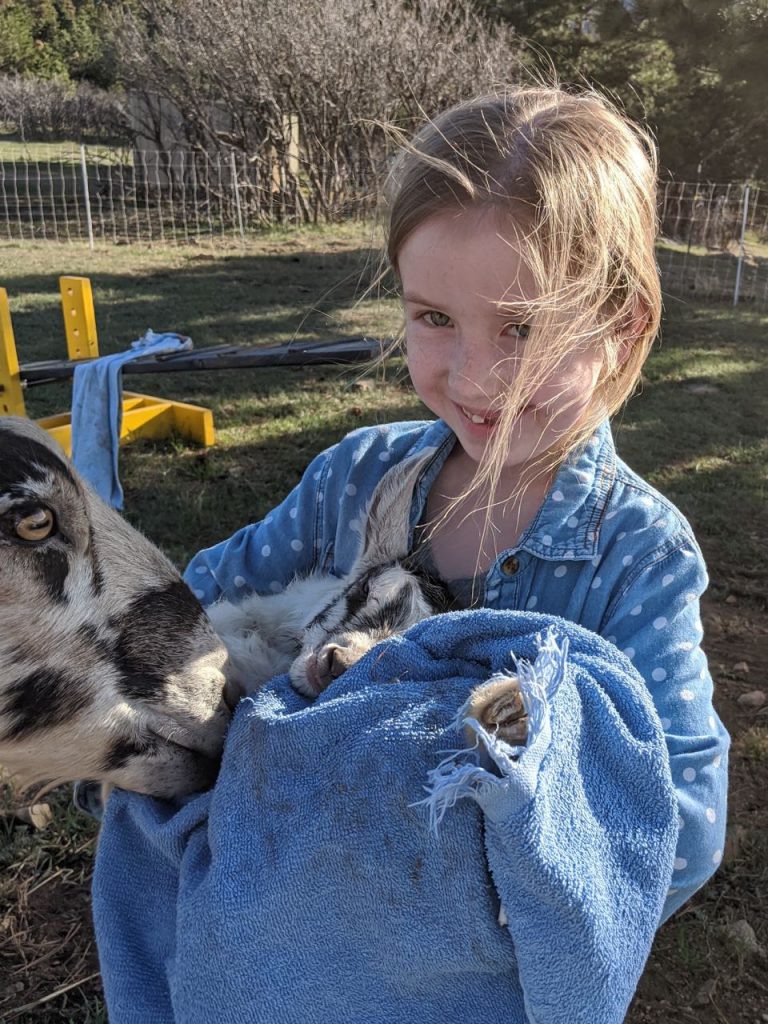 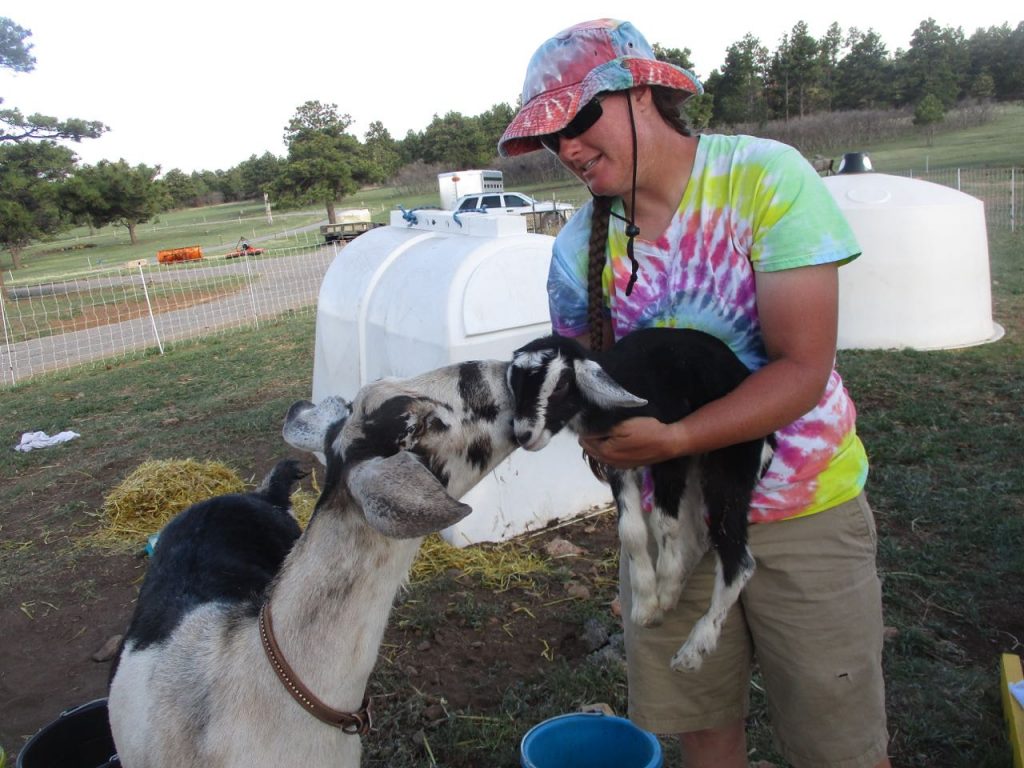 I don’t know why but I almost immediately named this little guy “George.” 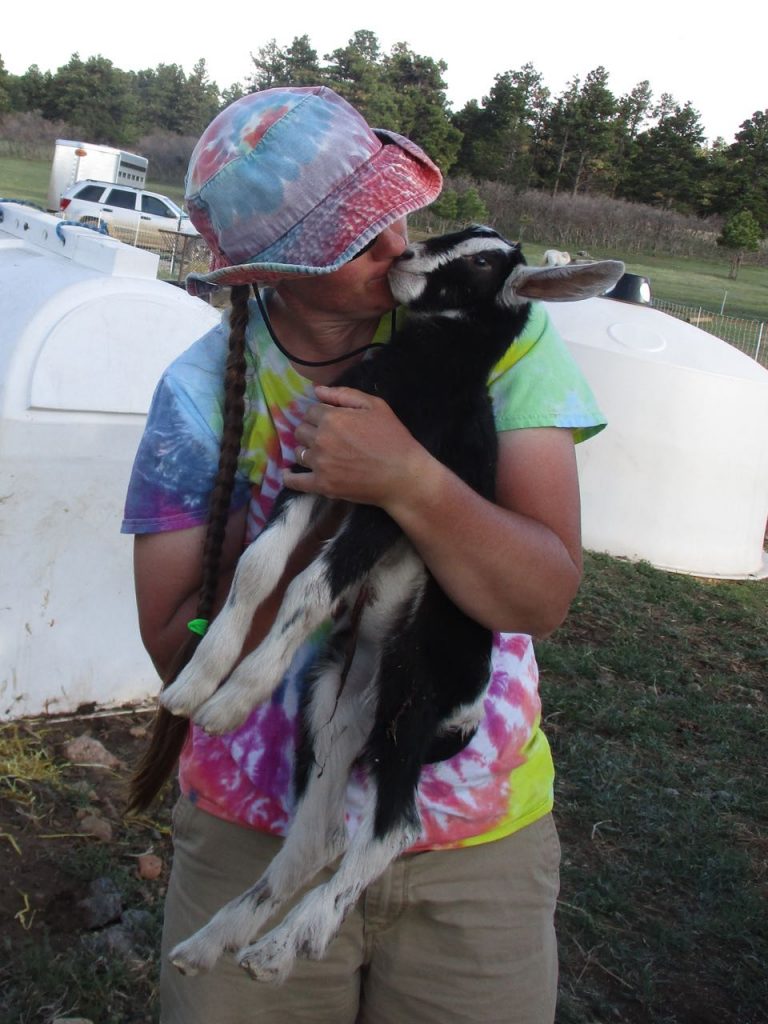 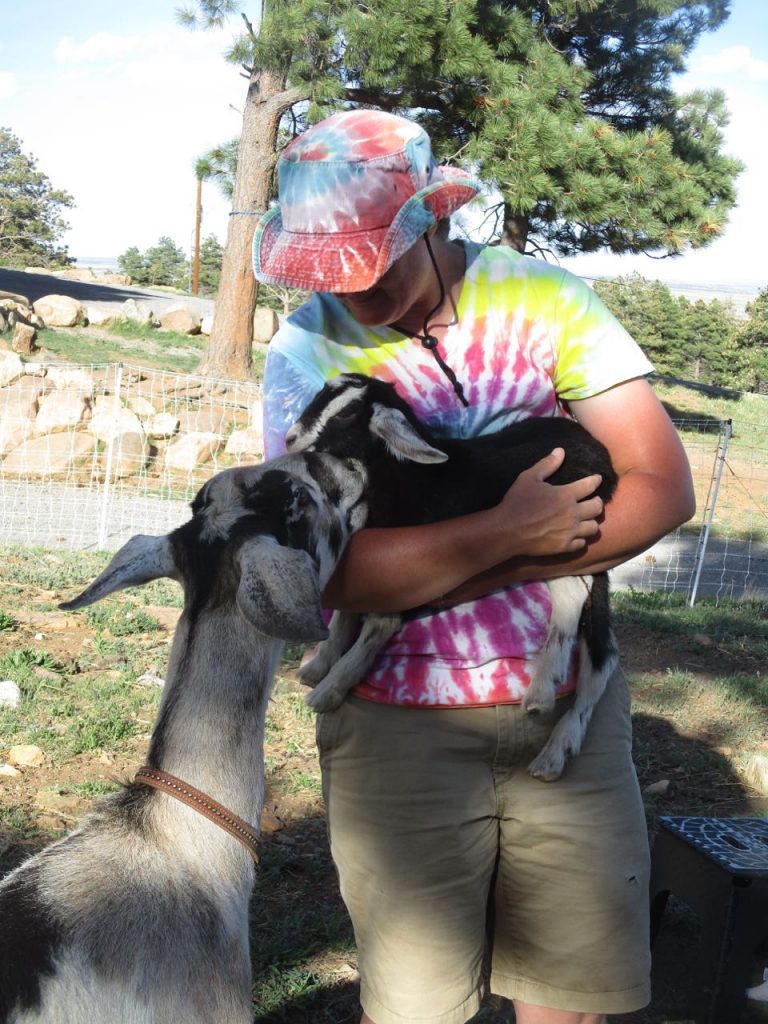 “Welcome to the family!” 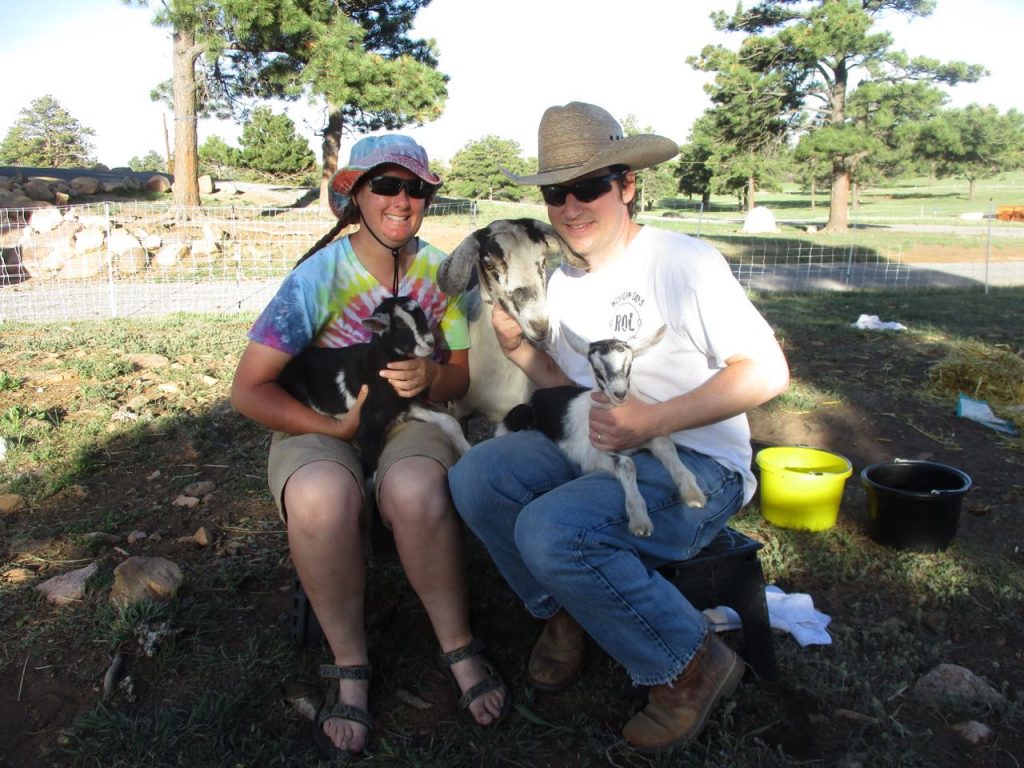 Once Phil and I showed up, the rest of the goats quickly lost interest in the proceedings. They had more important things to do–like graze this glorious spring grass and bask in the sunshine. Skeeter picked the perfect day to bring her little family into the world. It could not have been more beautiful. 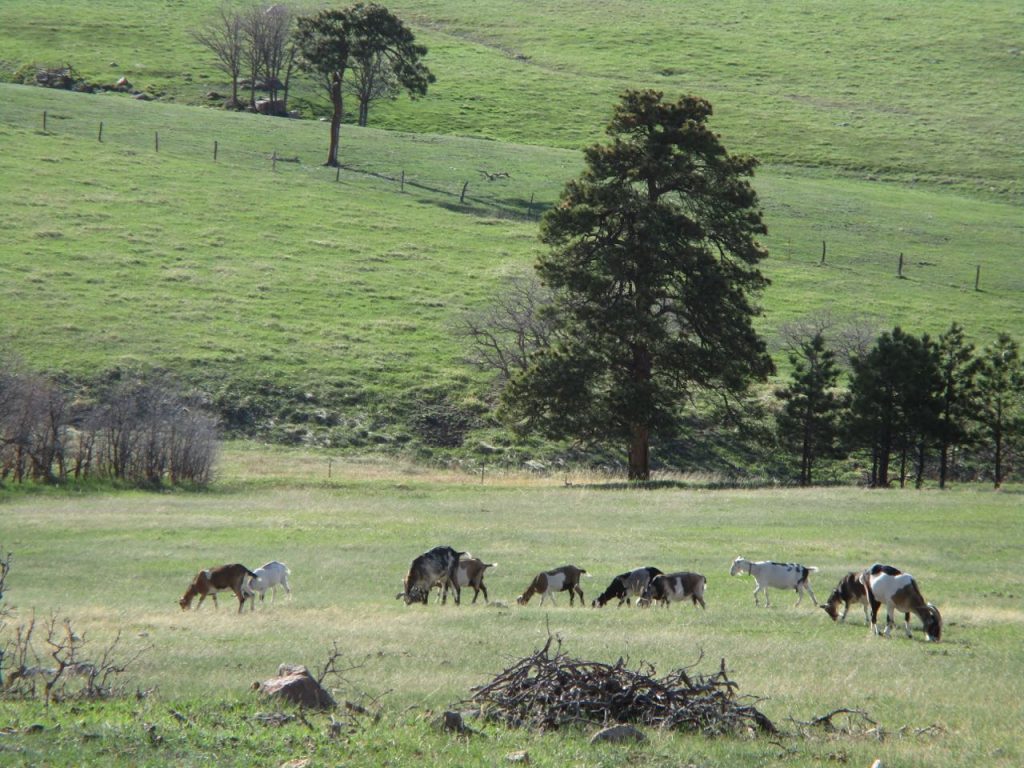