It’s been much too long since I’ve posted anything here, but then there hasn’t really been all that much to post about. The most exciting news lately is that WE CAN FEEL THE BABIES KICK!! Yes, our mamas are showing and if we feel their bellies in just the right places at just the right times, we are rewarded with a little flutter of baby hooves! We’ve got four mamas due in May. Hooray!!

But until the babies come, we’ve got some practicing to do with our working wethers. Phil and I are teaching a harness goat clinic at the Weld County Goat Extravaganza in April and we need to make sure we at least give people the impression that we have some general idea that we know what we’re doing.

Yesterday was beautiful and Phil and I were able to take Finn and Sputnik out for a little drive around the golf course. The boys were almost perfectly behaved for the entire drive. They even crossed water! There was a bit of balking the first time I faced them into this puddle… 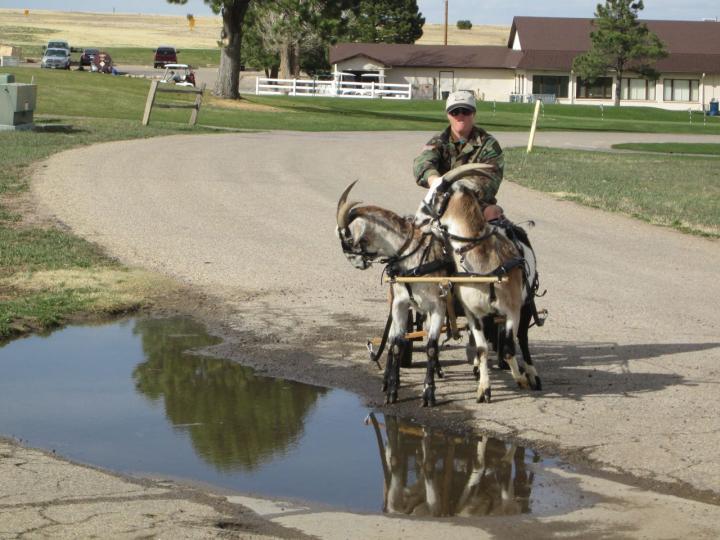 But with a little encouragement, Sputnik splashed in and Finn couldn’t help but accompany him. Finn really wanted to leap the puddle and was all gathered up in a heap at the edge, but he wasn’t exactly sure how to jump while hitched to a wagon. Luckily Sputnik was there to show him how to cross by putting one foot in front of the other. 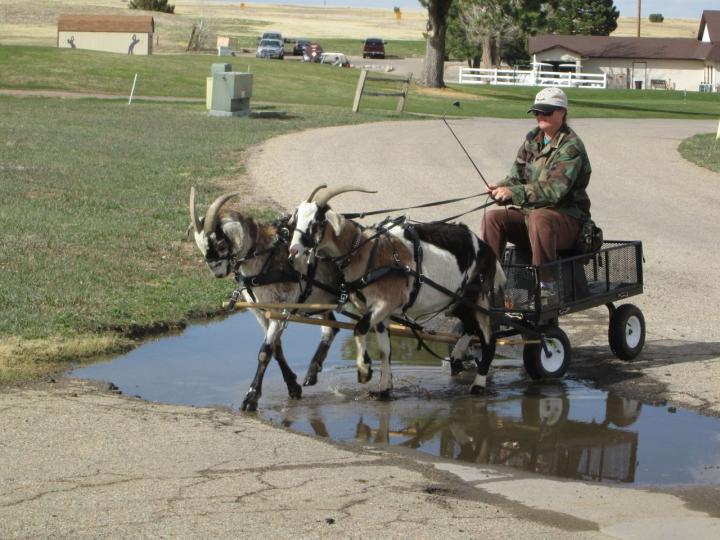 Then we turned around and went back through for an encore. The second try was better than the first. 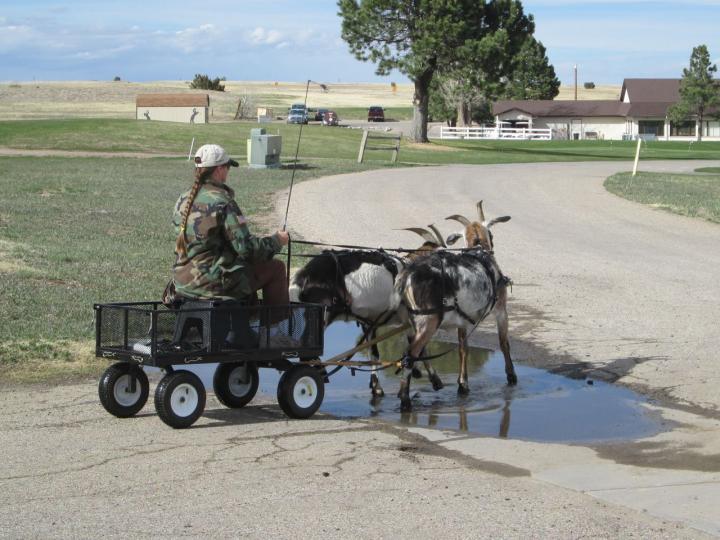 Good boys! We crossed the puddle two more times before continuing on our drive. I got out after each crossing and rewarded the boys quite profusely. Finn even got GRAIN! 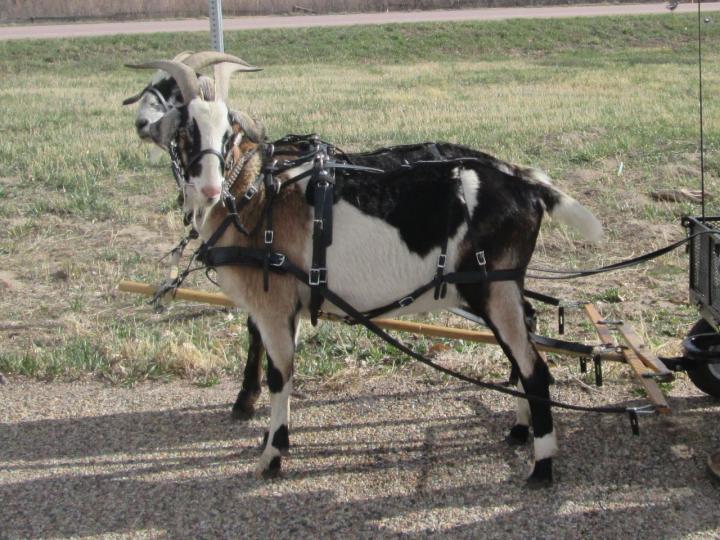 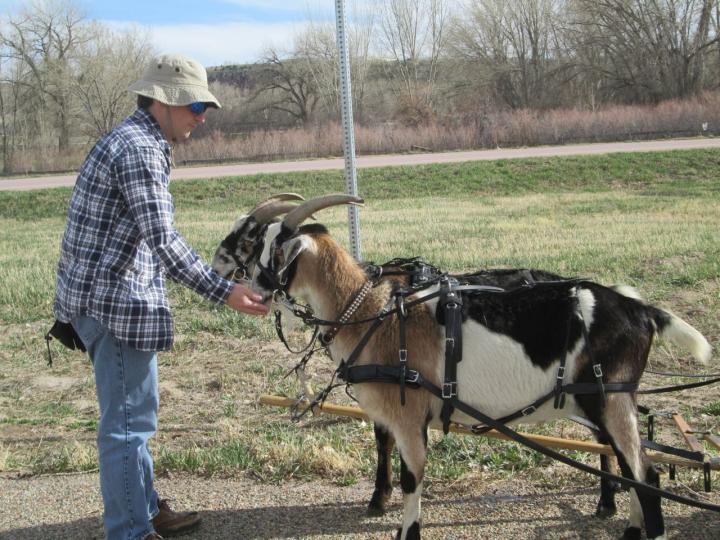 I love this drive because the road is very level and very quiet. There is seldom any traffic at all, and the cars that do run on it go very slowly. The road is almost perfectly level and runs in a mile loop so we never have to backtrack. The best part is that it parallels a busy highway for quite a ways but with a sizable ditch between the two roads. We’ve been able to accustom Finn and Sputnik to all kids of speeding, noisy traffic including sirens, trucks, air brakes, and rattling trailers without ever having to actually compete with those things on the road. It’s a marvelous place to train! 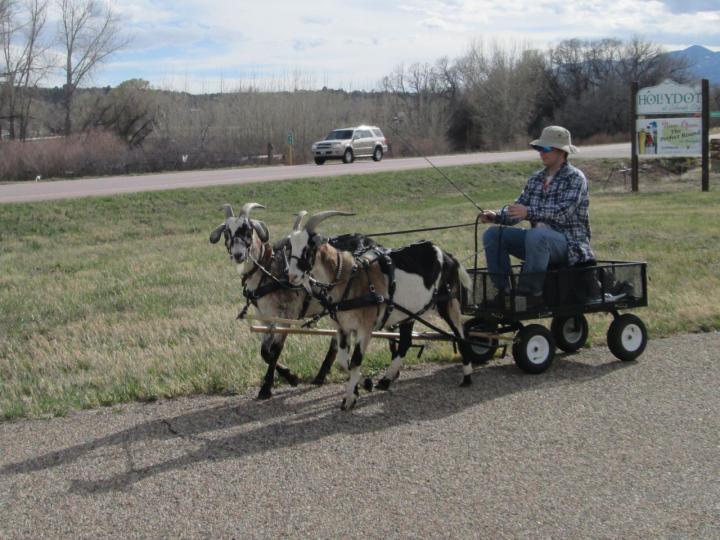 We also get to enjoy the mountain scenery and a view of the golf course the entire way around. 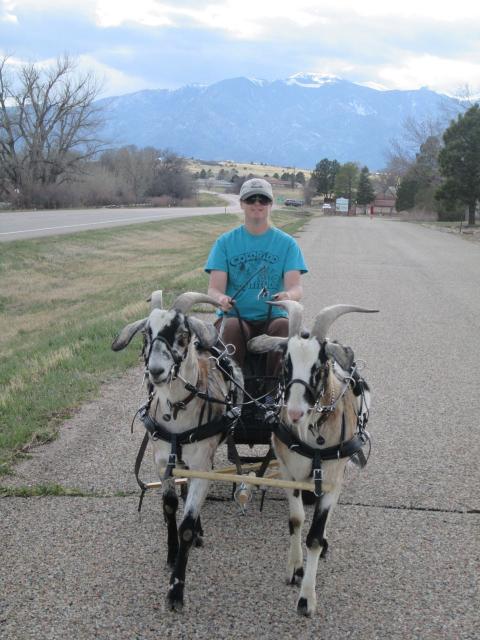 Phil and Finn look so noble! It’s too bad Sputnik is ruining the picture with his fussing. 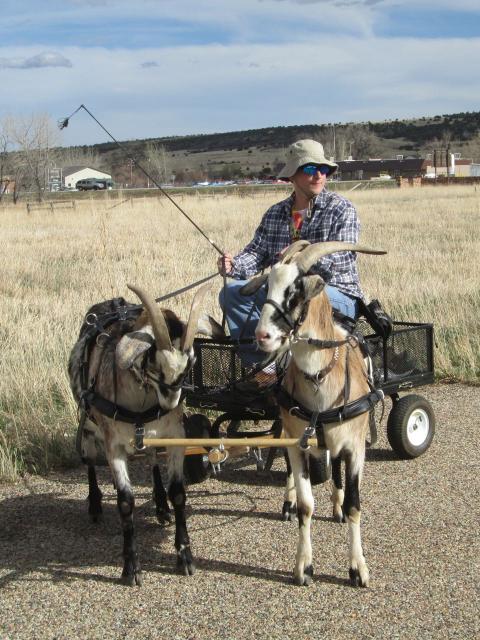 As a final hoo-rah, Phil drove the goats past the truck and the clubhouse (they were a bit hesitant, but they did it) and brought them back to the puddle. 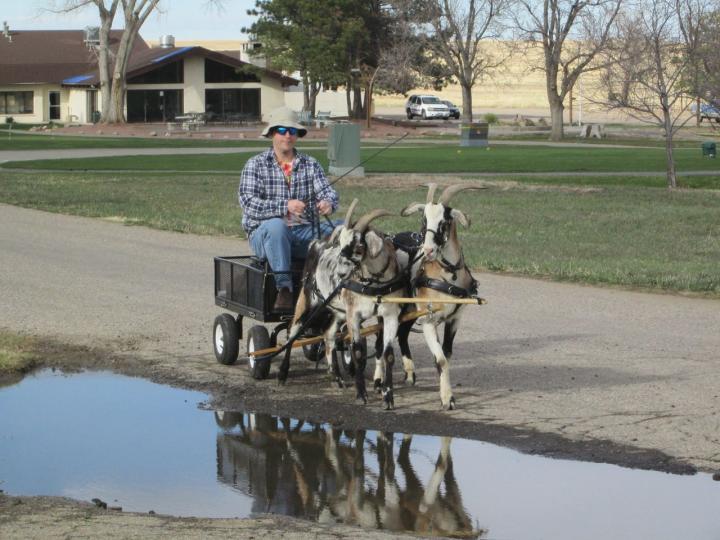 They went through like champs! We were very proud of them, and of course there were cookies all around, and we led them back to the truck. 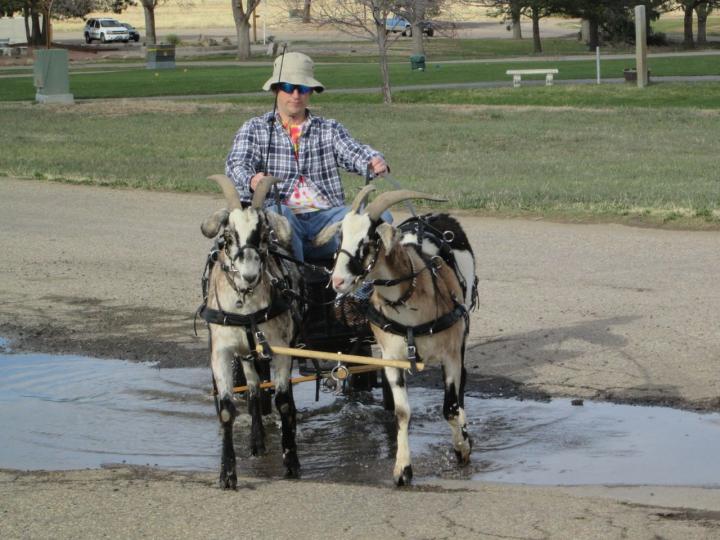