We had quite an exciting time at the Weld County Goat Extravaganza this past weekend. Phil and I brought Cuzco the Wonder Goat and his pesky sidekick, Pac-Man. No superhero is complete without a sidekick, of course, but one must wonder if their most amazing power lies in their ability to put up with the little creeps. Cuzco was in his element. He seems to love these shows. This is now the second one I’ve brought him to and once again he seemed to revel in the charged atmosphere, the crowds, the bustle, the cameras. I think I realized for the first time at this show that Cuzco is really and truly my goat. Or at least that I’m his person. As long as I was in the building he tracked me everywhere, never taking his eyes off me. If I went out one door and came in another, he’d still be watching the door I left from. He hasn’t baa-aa-ed for years, but this weekend when I would return after leaving him for a while, he would let out a soft, gutteral baa-aa from deep down in his throat. He was never upset when I would leave, but he never let me out of his sight when I was around. Cuzco laid down for a nap while I was getting lunch and I didn’t want to disturb him so I tiptoed past his stall. I think he caught my scent as I passed because his head popped up and he looked eagerly around. By then I was behind his head and he didn’t see me so he laid back down. I must say I was deeply moved by his attachment to me. It’s hard to imagine how such an ornery old goat can have such a deep affection for anyone.

Cuzco was quite congenial all weekend, but I put warning signs on his stall anyway just as a precaution. They said, “Admire me from a distance but PLEASE DON’T TOUCH! I’m old and cranky and well-armed!” Cuzco did his best to lure people over and tempt them to put their hands in his stall anyway. 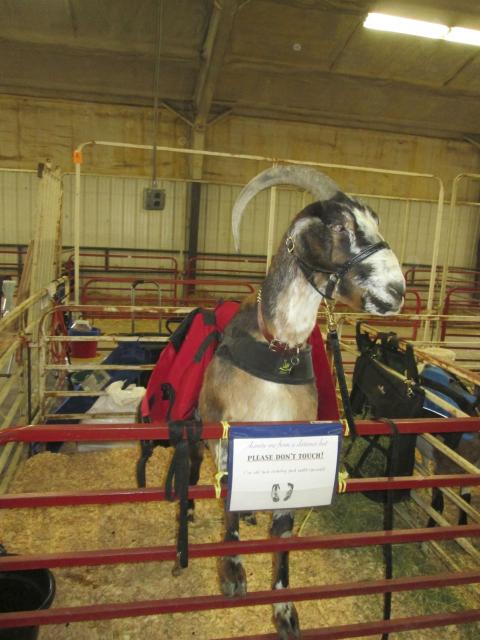 Cuzco and I helped Phil with his packgoat presentation, and Cuzco wowed everyone with his repertoire of tricks. Most people didn’t realize you can actually train goats to do things like shake hands and spin and bow! 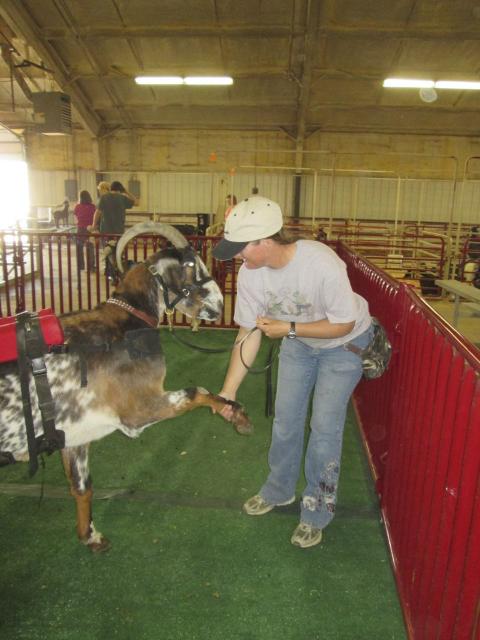 Bow was a new one. I wasn’t sure how easy it would be to teach Cuzco this one since he’s already known “Repent!” for many years. He’s always been required to go down on two knees and got no cookie for doing a half-baked one-knee bow. But this time I wanted him to go down on one knee. It only took him a week to learn it. I still have to put my foot behind his left hoof to remind him not to bend that leg back, but he did it very well to much cheering and applause. 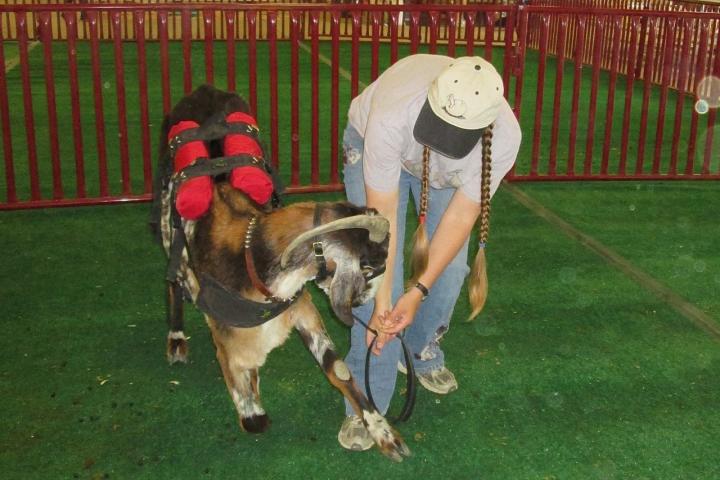