On the final day of the Rendezvous we climbed Uncompahgre Peak. It was perfect weather for our hike, and wildflowers dotted the landscape. This woman, Kate, came all the way from Australia for the Rendy and since she couldn’t bring any of her own goats with her, she adopted Tigerlily for the weekend. Tigerlily carried a few of Kate’s things in her little pack and she did great! 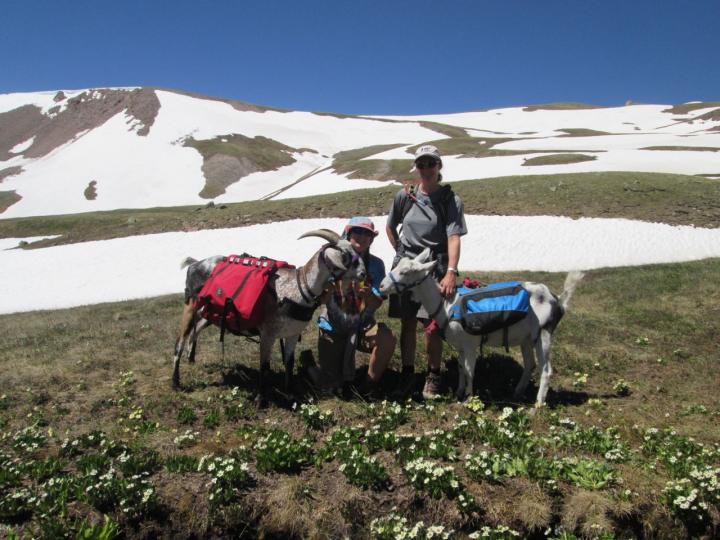 We had to cross a lot of snow in the basin below the peak. It was soft, deep, and heavy and presented a real challenge for the big goats–especially the ones carrying packs. Goat toes are great on rocks, but terrible in snow. They sink straight down and can get no purchase so they wallow as if in quicksand. We felt bad for them so we tried to avoid snow as much as possible, but often there was no way around and we simply had to help and encourage them as best we could. 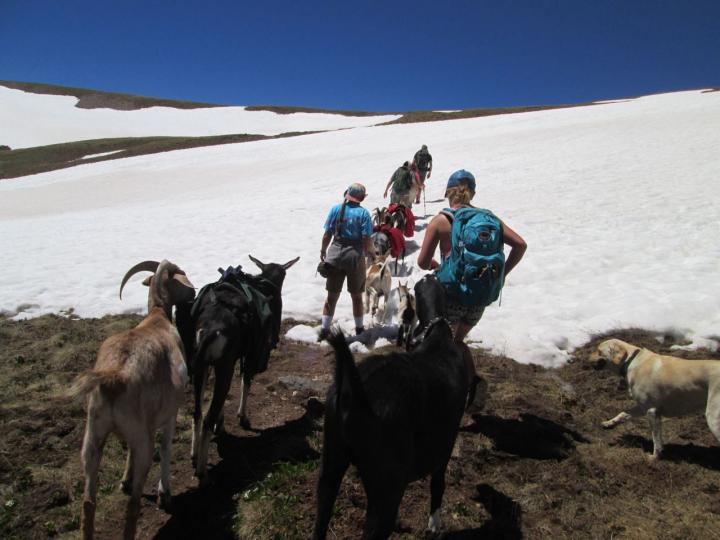 Finn really knows how to strike a pose! 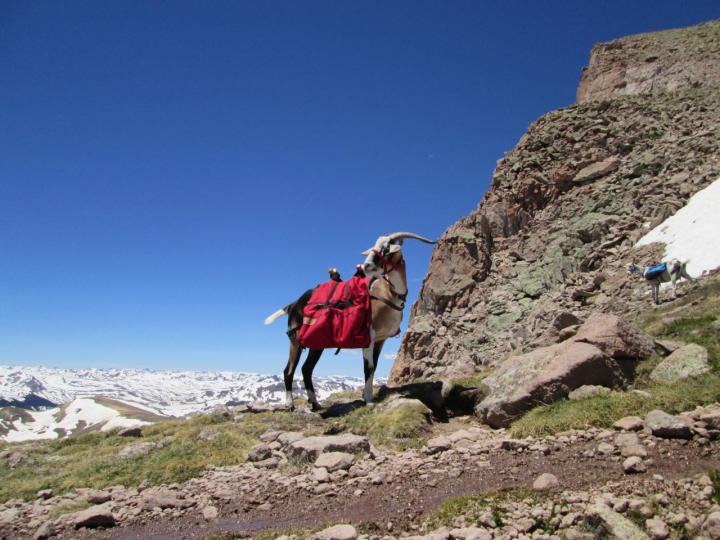 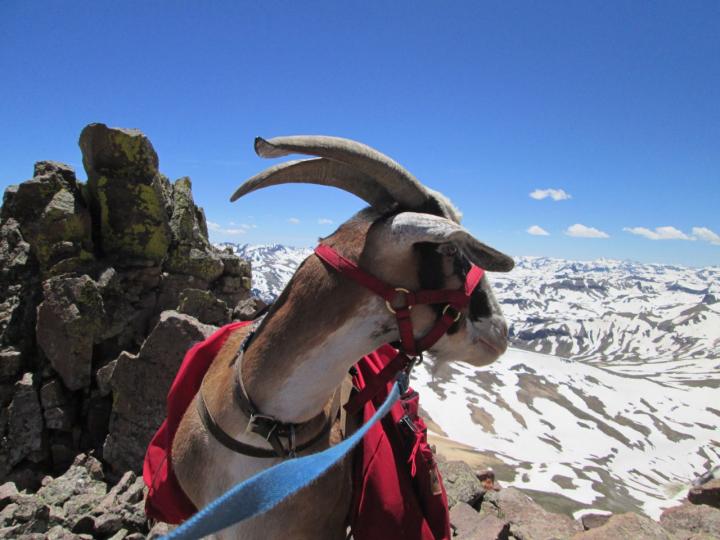 Finn and his best pal, Phil. 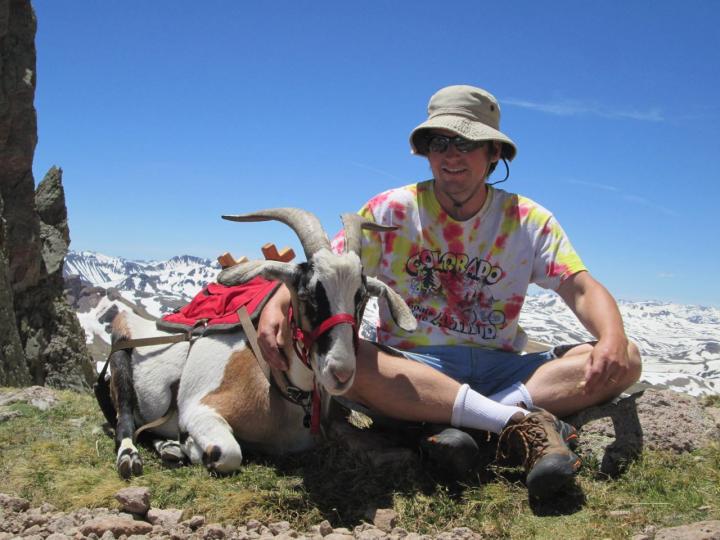 Goats look so at home on this type of landscape. 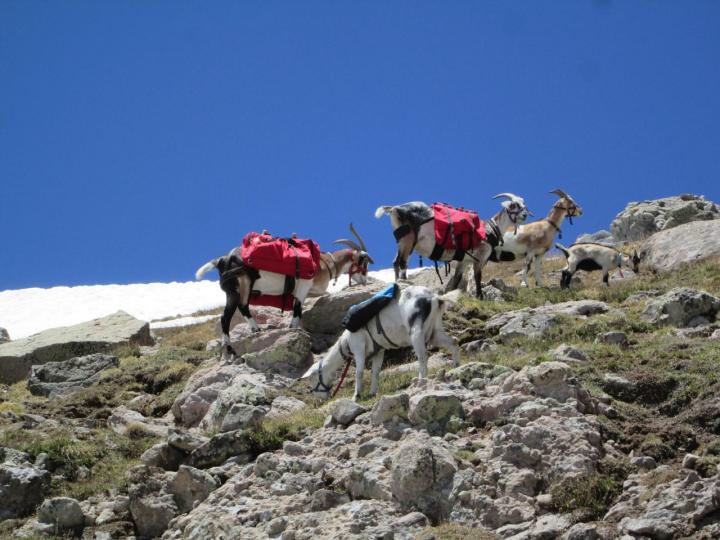 Phil and I with Finn and Sputnik at the summit. 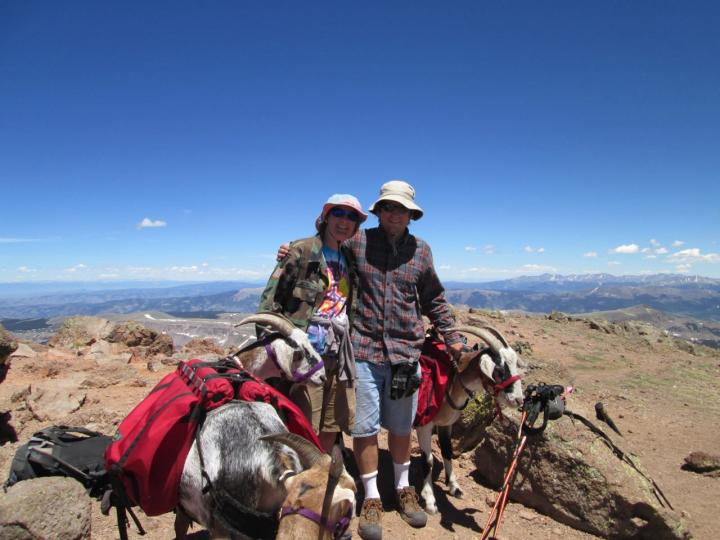 Finn showed off along the cliffside just like he did when we hiked this mountain last fall. 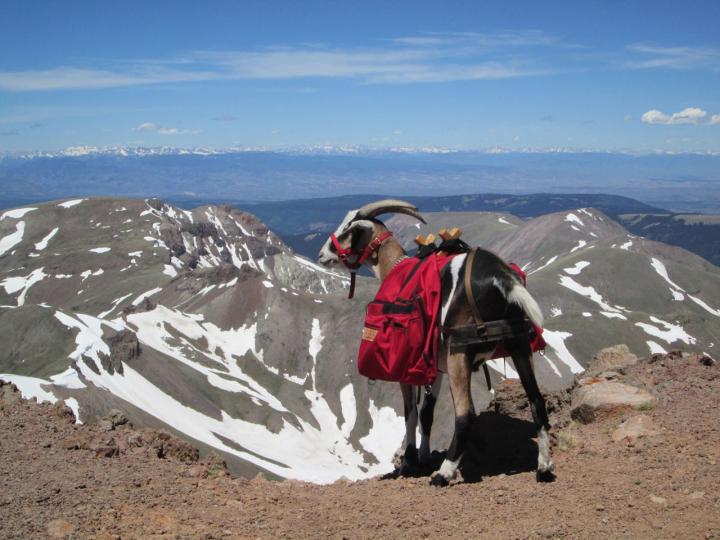 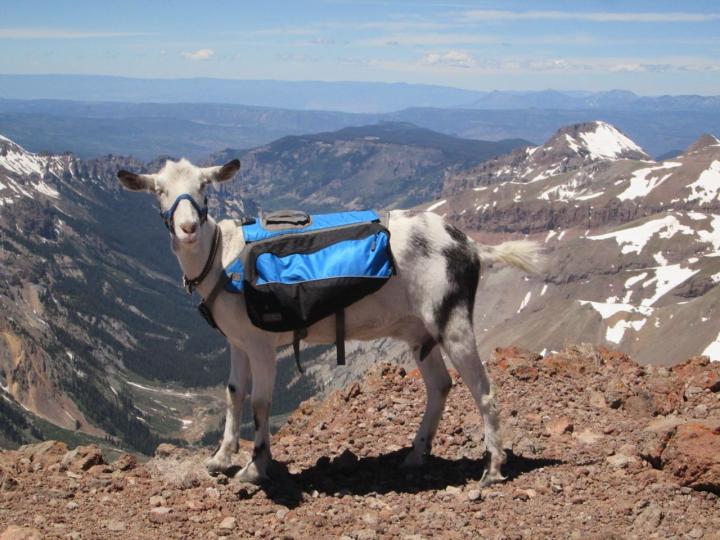 “Please don’t jump, girl!” Tigerlily and Finn both gave me heart palpitations as they cavorted as close to the edge as possible. 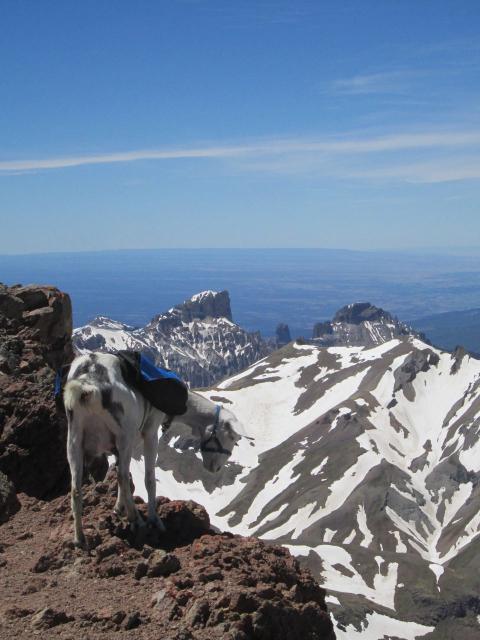 Sputnik is more sensible. He preferred to spend his time resting up a safe distance from the precipice. 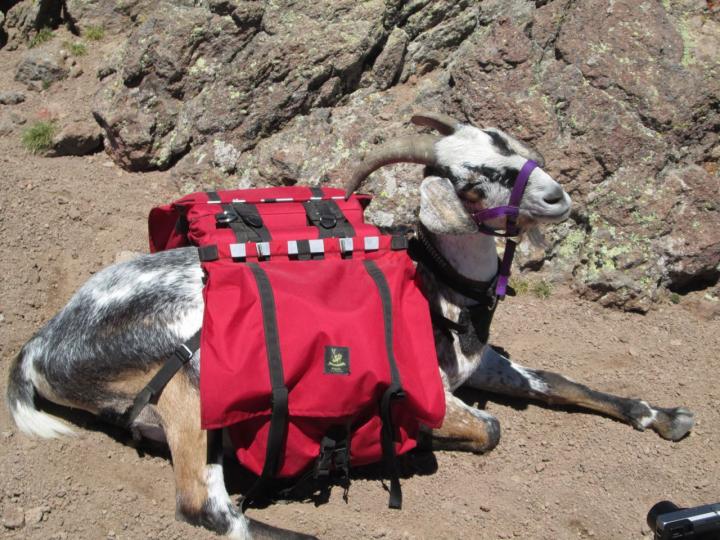 There is a 360-degree view from the top. Tigerlily wanted a peek through the binoculars. 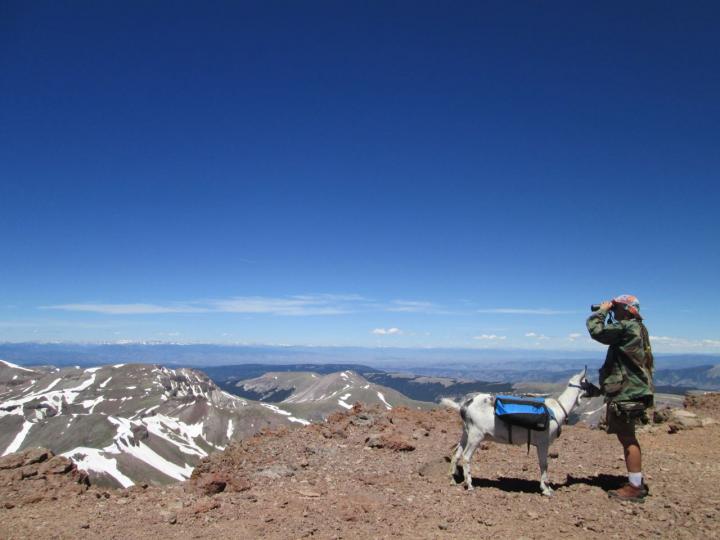 Eventually even Finn took time out for a rest before we headed back down. 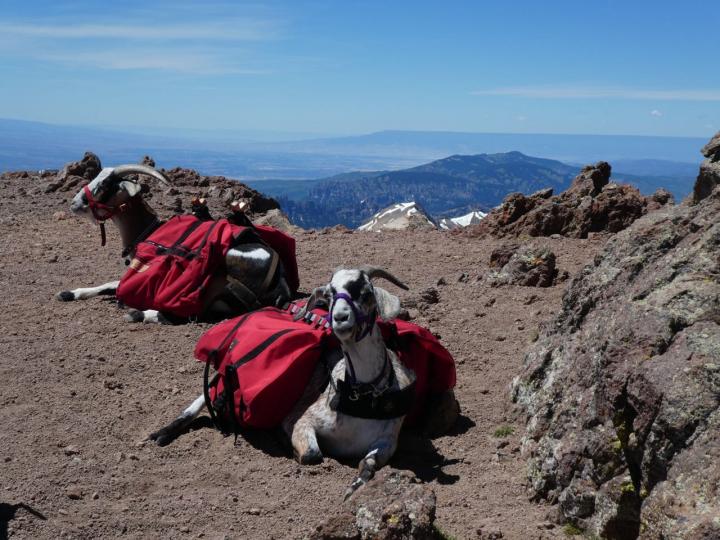 Just me and my three. 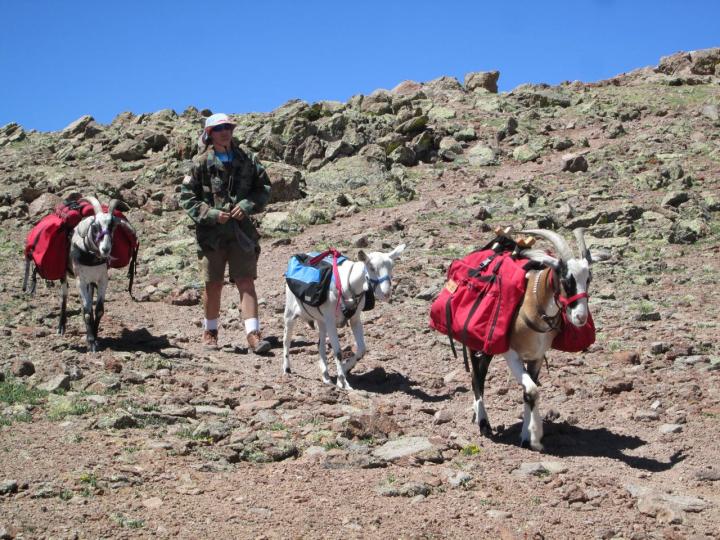 My faithful companion, Sputnik. He’s turned into a good, sensible packgoat. He’s not particularly athletic, but he gets the job done and he doesn’t shirk or complain. He also blends in perfectly with these rocks, so it’s a good thing I use red packs! 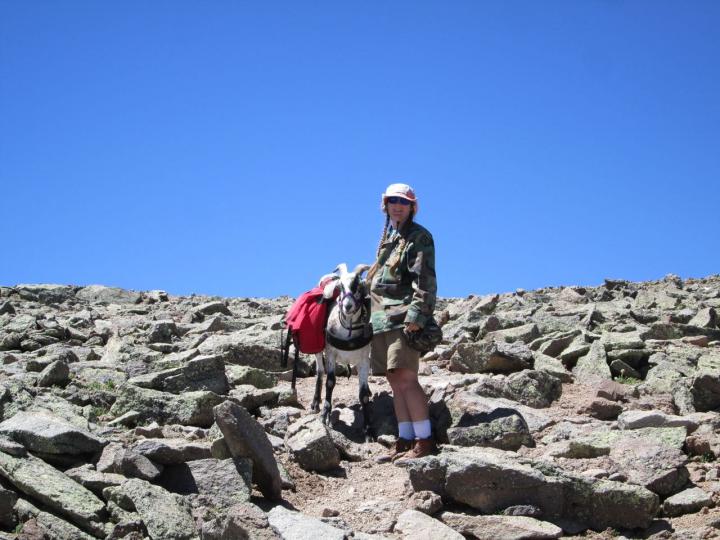 I had charge of Sputnik and Tigerlily for the somewhat treacherous boulder descent. I tied her to Sputnik’s saddle because she kept chasing and trying to smack one of the baby goats who accompanied us on the hike. Sputnik was steady. He kept Tigerlily in line without power tripping over it. 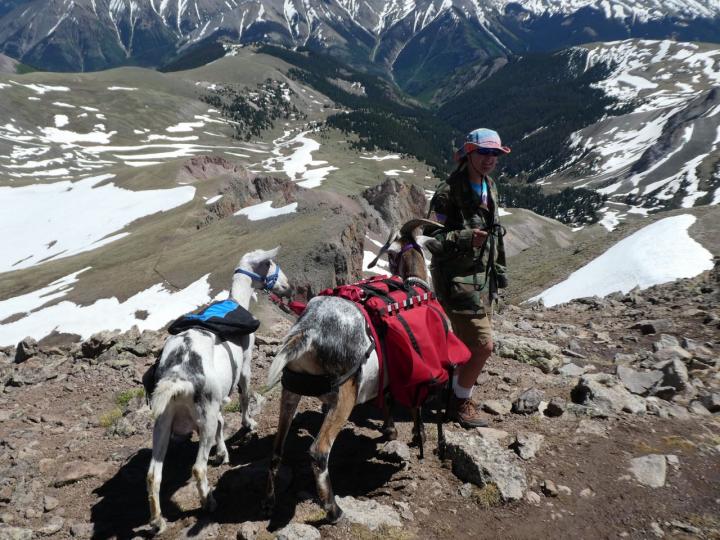 And then there’s Finn. Finn is flashy, athletic, and a major go-getter, but unfortunately he knows it and he has an alarming tendency to show off in dangerous places. Take this precipice as an example. 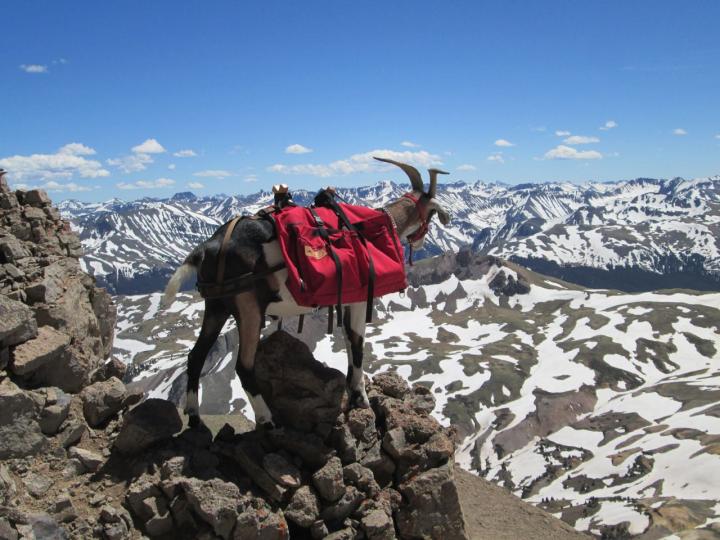 This pinacle was near the bottom of a steep boulder field which we had to scoot down on our bottoms. We had to go one at a time and keep our goats close to avoid rolling rocks down on each other. Phil and Finn reached the bottom and Phil let go of Finn to let him find his own way down for the last bit. Instead, Finn took a detour so he could pose regally on this rock outcropping. Then he wouldn’t come down! I suppose he wanted everyone to take as many photos as possible. He stood there a long time while Kate scooted down the boulder slide behind him. Apparently Finn was so busy posing and taking in the view that he didn’t notice Kate until she was right behind him. He caught sight of the legless Kate-monster slithering down the slope behind him, panicked, and instantly took flight–literally. He sailed off the front of the outcropping, which is a sheer drop of about fifteen feet onto a very steep scree and boulder slide. Between the size of the drop, the steepness of the landing, and the weight of his packs, Finn’s hind end very nearly overtook his front end and he came terrifyingly close to somersaulting head-over-heels down the mountainside. Yet somehow Finn landed the leap without flipping or catching a foot between any boulders. He skipped on down the trail like it was nothing, but I’m pretty sure I have more gray hairs now than I did before that hike! 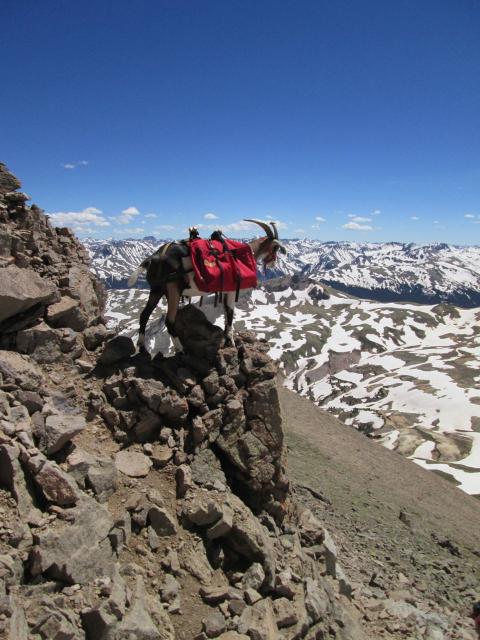 “Yeah, Finn. You’re awesome until you’re not, buddy. Please don’t kill yourself trying to demonstrate how cool you are!” 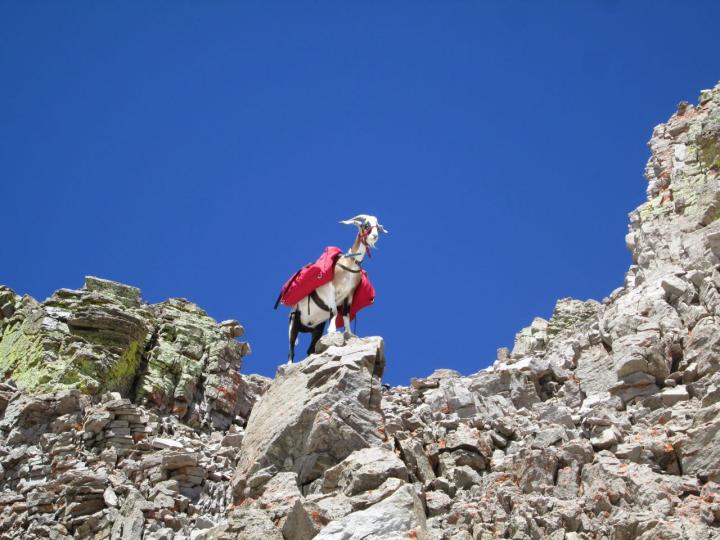 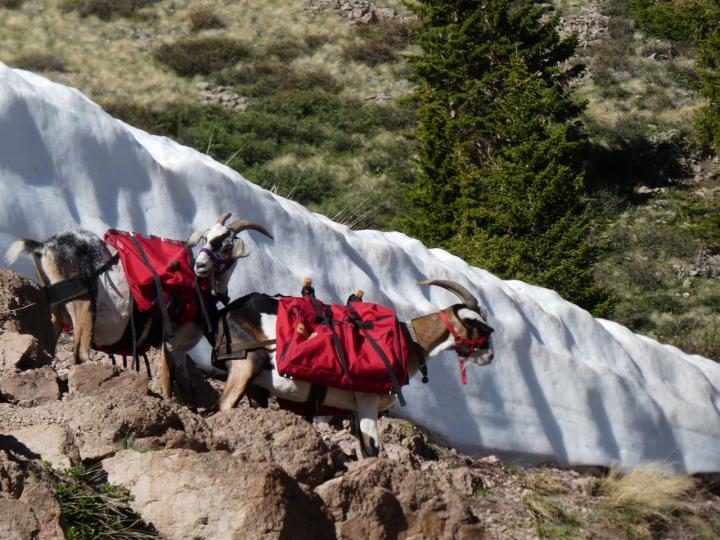