The first day of the North American Packgoat Rendezvous dawned clear and bright with a nice breeze to keep things pleasant. Trucks and trailers began rolling into the campsite before noon and people spent most of the day setting up their camps. There were people gathered from at least ten different states plus Hawaii and Australia!

The second day was more organized, with several educational classes presented. Phil and I taught one on harnessing, hitching, and driving goats. Finn and Sputnik were excellent teachers. 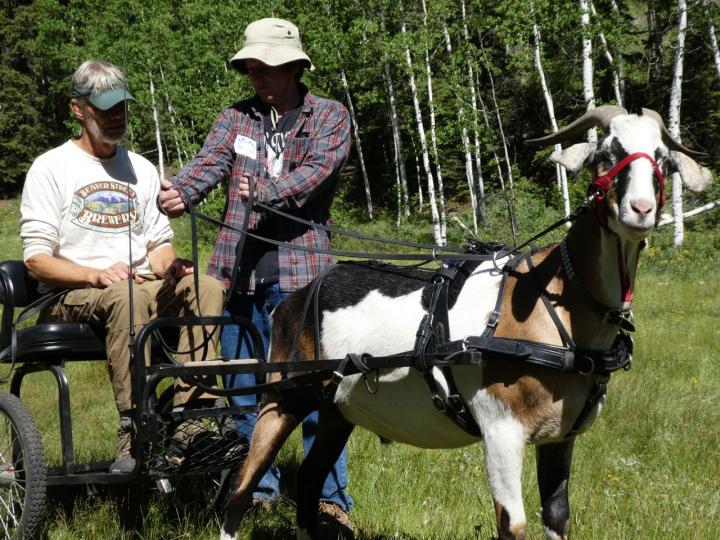 One of the celebrities of the Rendy was the elusive, reclusive John Mionczyinski, known as “the father of goat packing.” He rarely attends these events so it’s a real treat when he shows up. He has a vast wealth of knowledge and experience and he loves telling stories. Listening to John’s stories was a highlight of the Rendy. 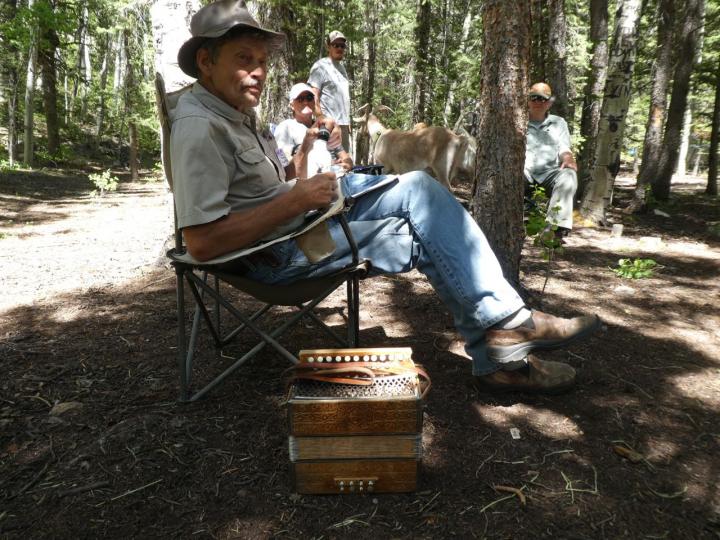 John has an old squeezebox and has composed many “goat songs” which he likes to play near the campfire. 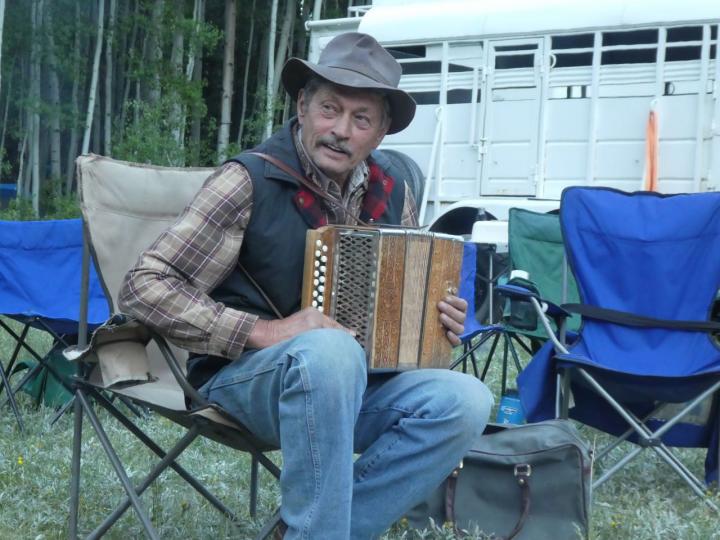 Tigerlily wasn’t quite sure what she thought about it, but the rest of us sure enjoyed the music!

Phil brought his fiddle and gave us some music as well. Another fiddler named Jenny also attended this year, and she and Phil played many duets. They played so well together that most people in the crowd were surprised to find out that they had never met or played together until that evening, and that they hadn’t even practiced beforehand! 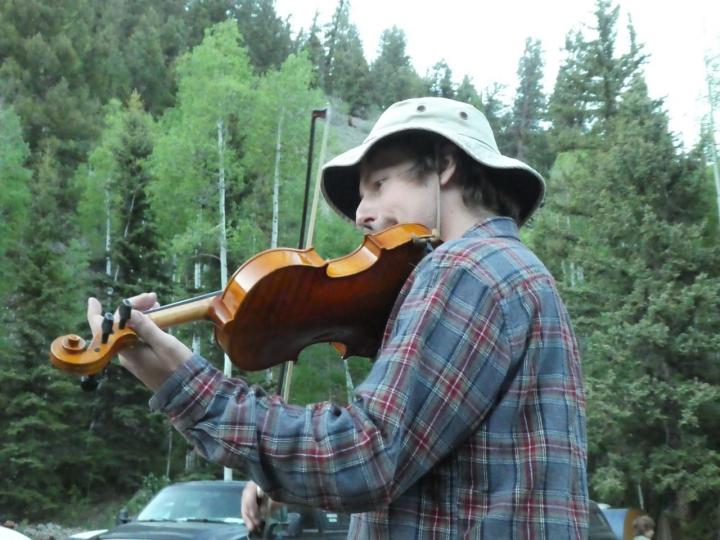 My friend Jordan came with her young packgoat-in-training, Geronimo. 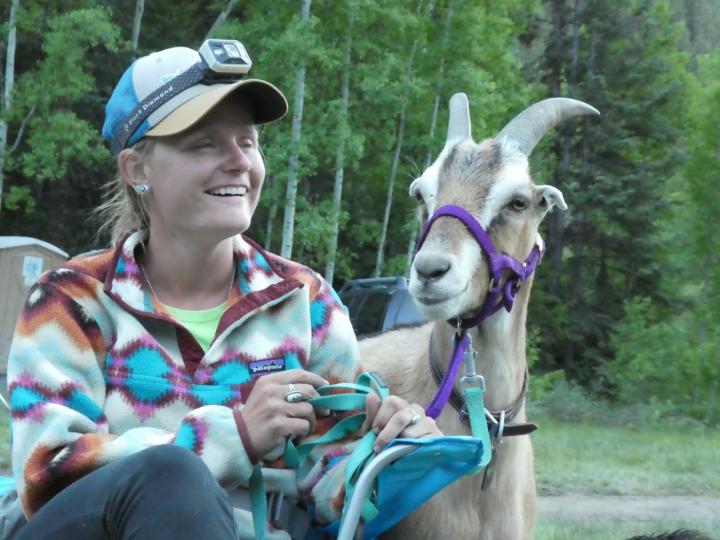 Next morning, we loaded our goats and a sizable work crew into a few trucks and headed off to do some repairs on the Alpine Gulch trail. 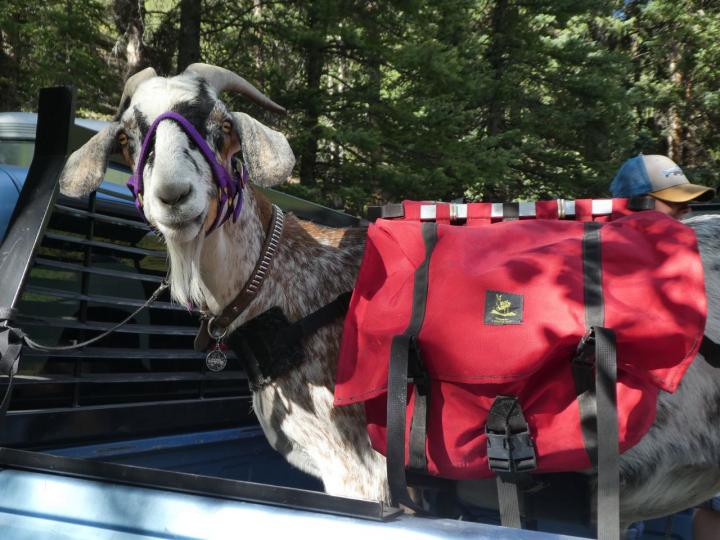 Finn carried a few tools, but mostly we left his panniers empty so he could carry rocks. Part of our goal was to rebuild a forty-foot section of trail that had been washed out by the creek. We rerouted the water and repaired the trail by hauling rock from a nearby mine tailing dump to fill it in. Finn hauled several 70-lb. loads in his panniers that day! 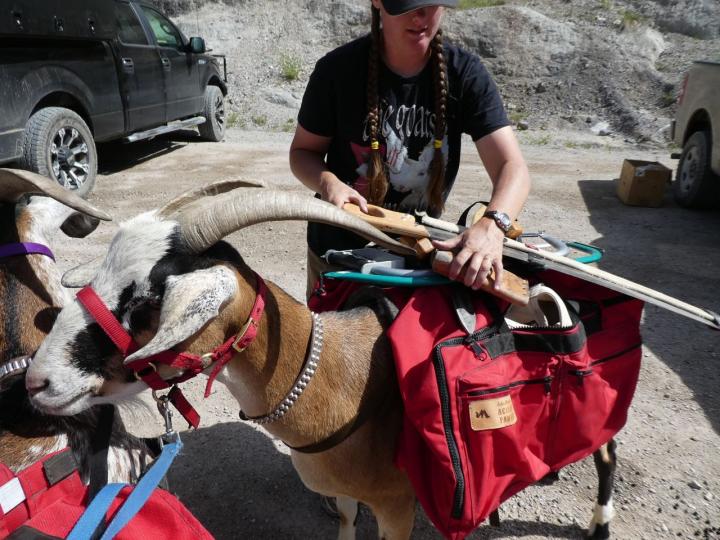 After we repaired the trail and blocked off the alternate route people had made, we spent the rest of the time building log bridges over the creek because the old ones had washed away. The creek was near peak runoff, so we got pretty wet! Finn and Sputnik really showed their bravery when it came to crossing the water. Other goats balked, but my guys went right over. Sputnik plunged into the fast-flowing, freezing cold, chest-deep creek, but Finn preferred to cross on the narrow log bridge we had just built. It was wet and slippery, and with his packsaddle on he almost lost his balance, but with a little encouragement he was able to make it without falling in.