We we were a little tired on Wednesday after delivering these wee ones in the wee hours, but they were worth it! With a little help from me pulling on their legs, Snowball delivered a big, strong baby boy followed by a small but also strong baby girl. Both kids were up and nursing in short order after Phil and I helped dry them off. We were able to spend a bit more time enjoying them the next day. 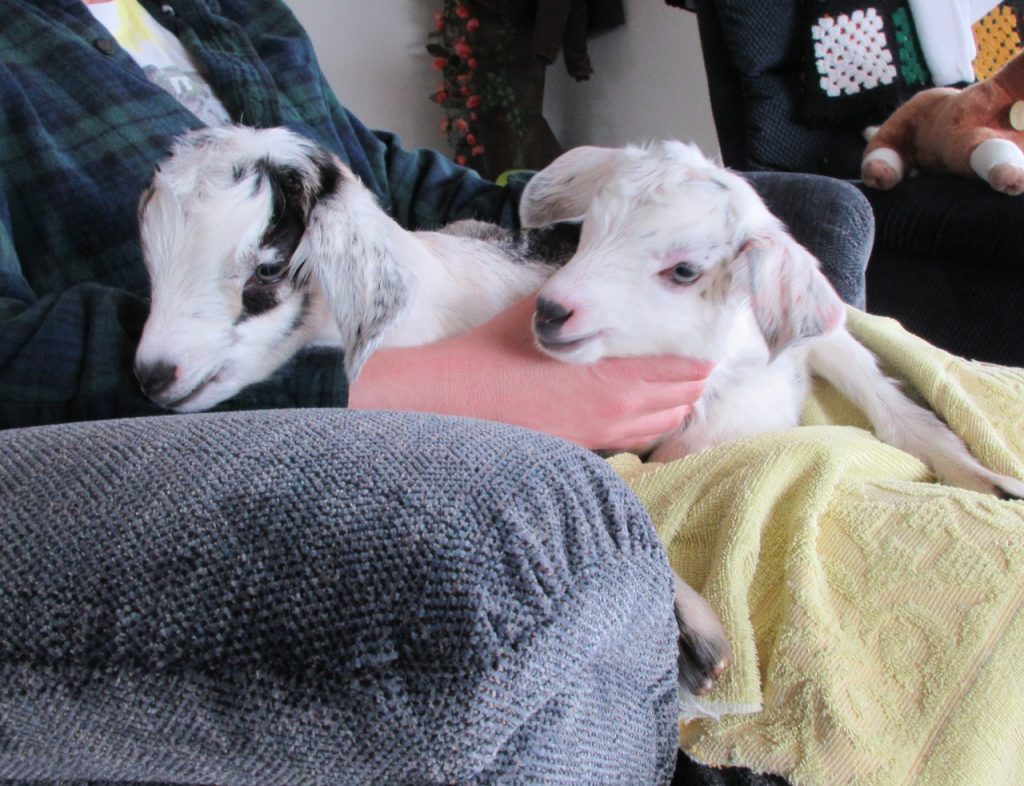 We’re calling the little doeling “Isabella”. She looks remarkably like her grandmother Tigerlily, but with more black down her back. She also has little black spots throughout her white coat that remind me of a Dalmatian. I’ve always wanted a Dalmatian but they aren’t very well suited to our situation. Perhaps a Dalmatian-spotted goat would do. 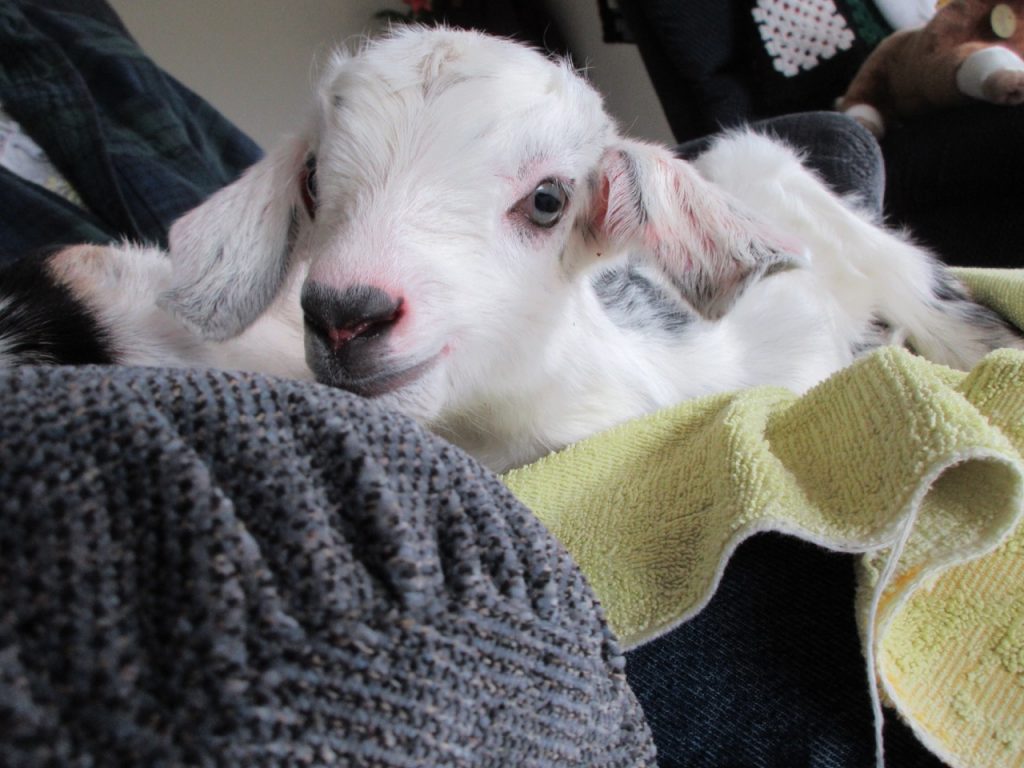 She loves to sniff faces. Her brother is happy just to lay in laps. 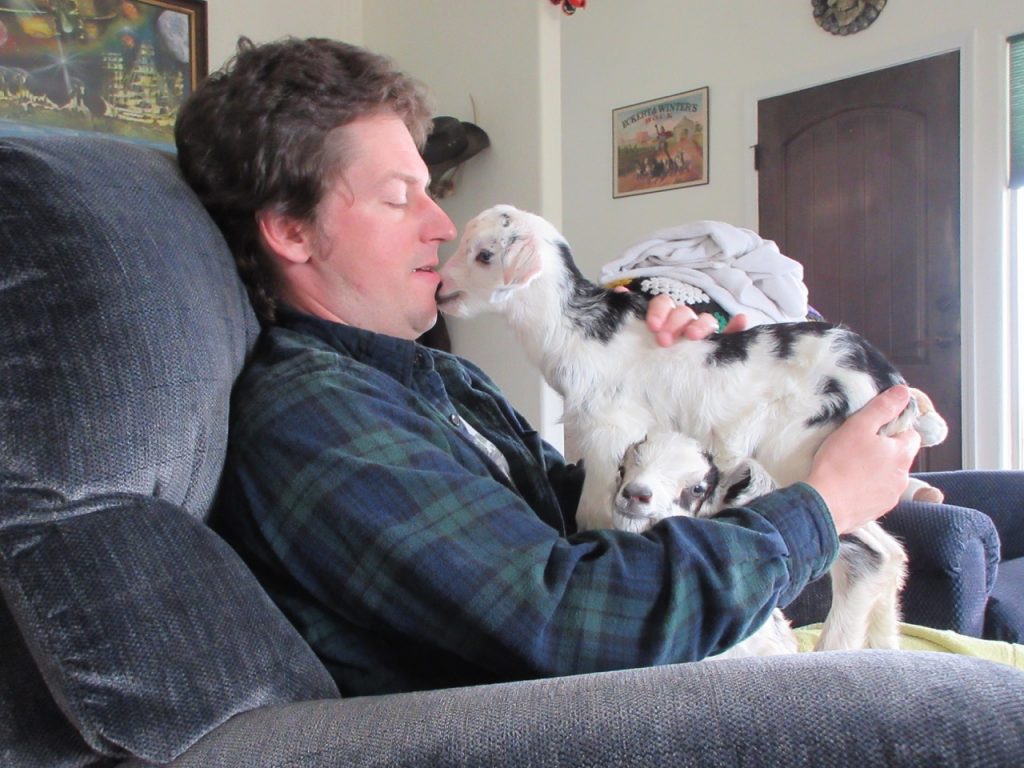 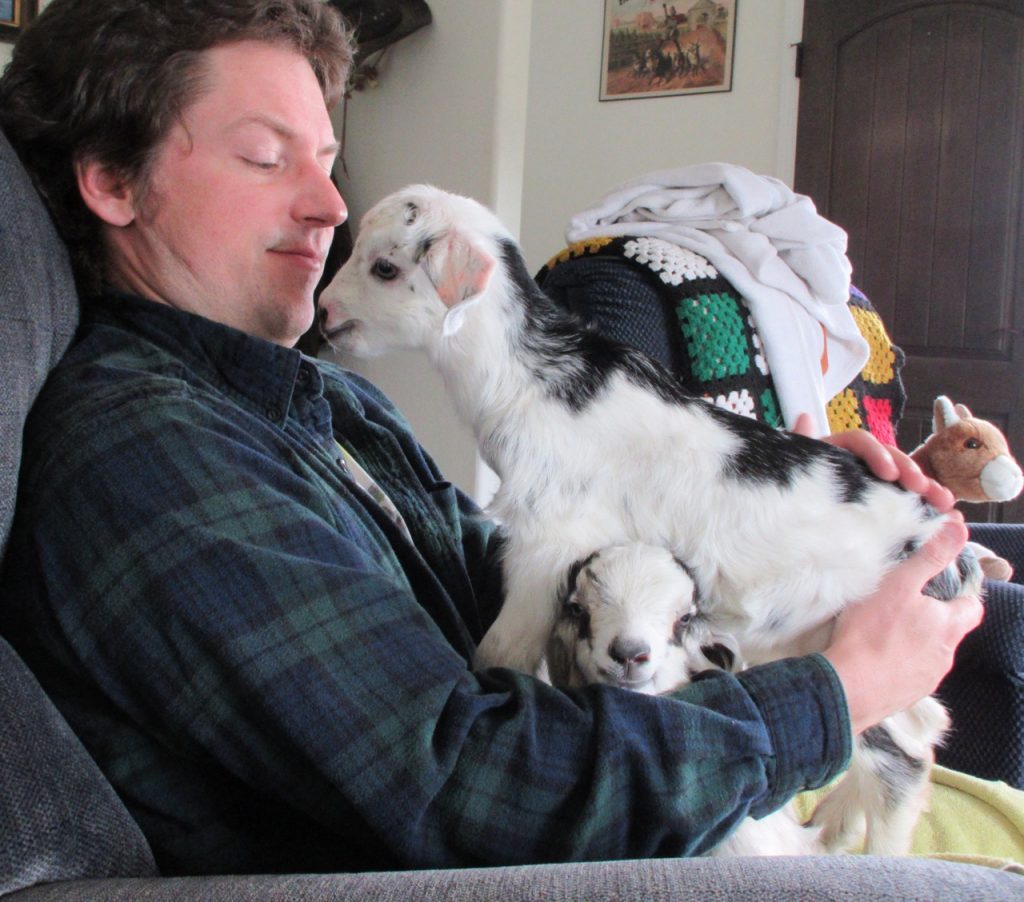 Isabella also likes to hog the camera. I had a much harder time getting pictures of her brother Hawkins. 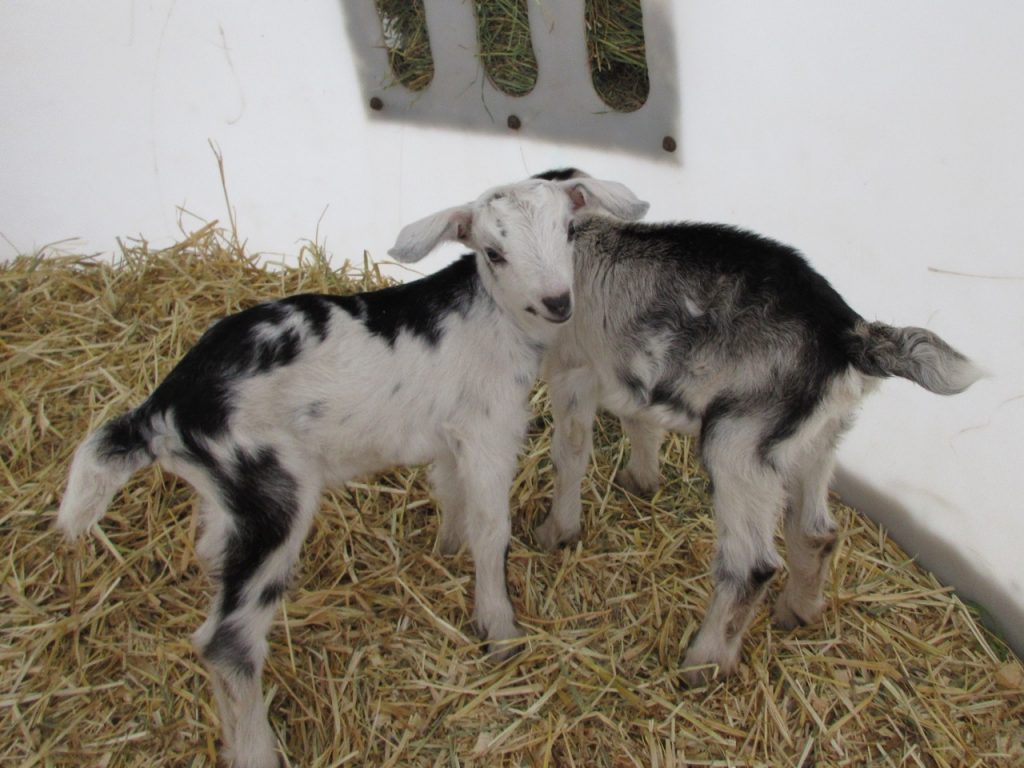 But then, who can resist this adorable face? It’s hard NOT to take too many pictures of a goat this cute! Look at those little puppy ears! 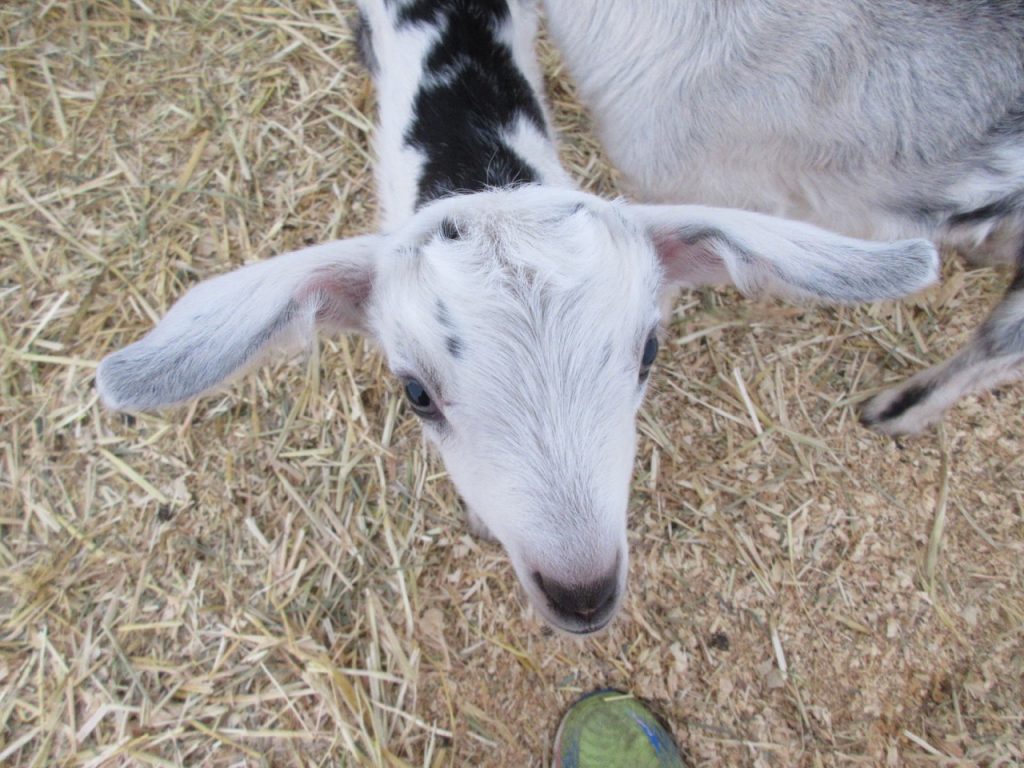 The photo is a little too clear to make it obvious, but when we look at the top of this little head through the somewhat blurry lense of the Goat-O-Scope we see two decoy happy eyes, or maybe some arched eyebrows looking back up at us. It won’t last long, but it’s funny in the meantime. 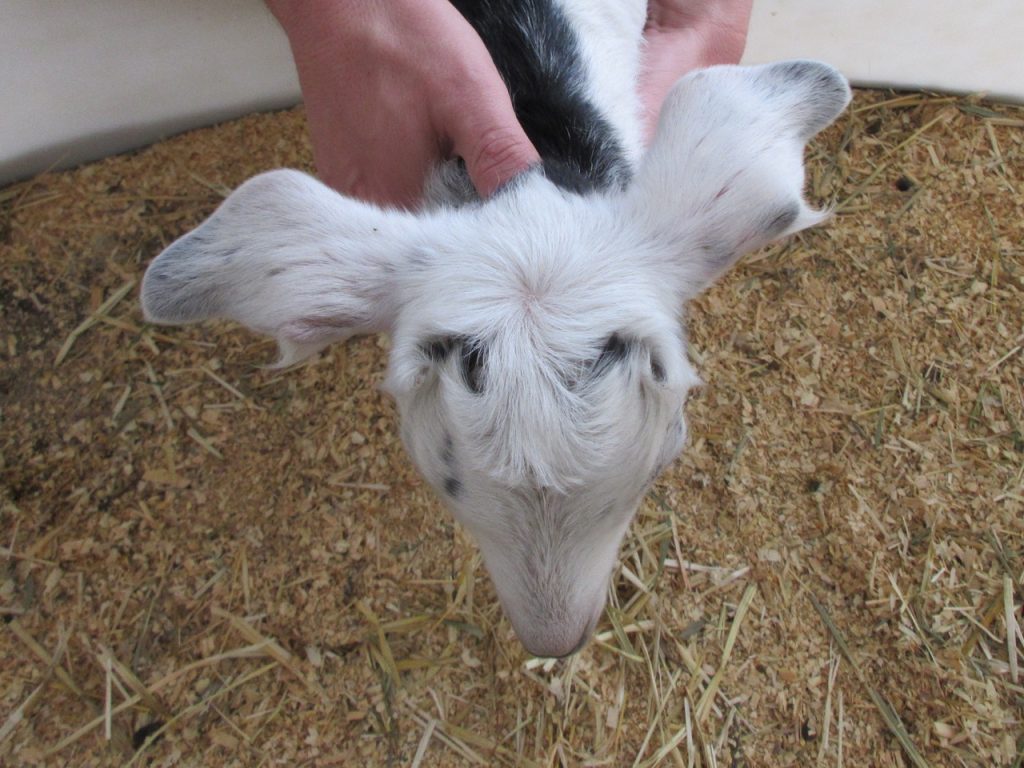 Hawkins would rather chill than mug for the camera. It’s hard to know what color this little guy will be. He’s similar to his daddy, Scout. Scout had a charcoal-colored back end but when he grew older it shedded out to solid black and now he’s a classic cou blanc. Hawkins will for sure be darker in the front than his daddy, but it remains to be seen what color the back half will end up. He also has a crinkled right ear that I might have to fix. Flop ears are ok. Pinched-together ears not so much. I had to fix Snowball’s pinched right ear when she was a kid too. 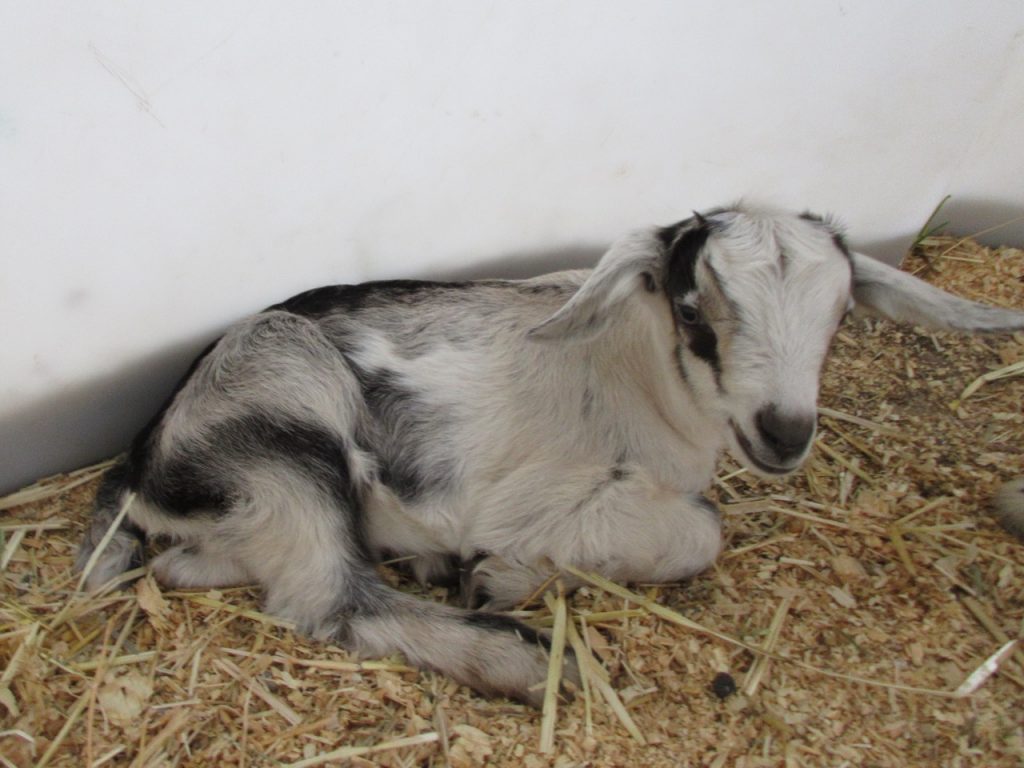