We left home late Thursday afternoon October 4th because our first stop was not very far–only about a 3 1/2 hour drive. Our destination was Wagon Wheel Gap, situated between South Fork and Creede, CO. Our cabins were only a mile from Pool Table Road, which would take us to our trailhead next morning. I was on a quest. Not only did I want to see Wheeler Geologic Area again (I hadn’t been there since 2004), but I was scouting for a potential spot for a future North American Packgoat Association Rendezvous. In that sense, I was disappointed. The area was not as ideal as I’d remembered, and pine beetles have made it temporarily even less suitable until the dead trees fall and the new ones can attain some height. But it was a perfect day for a hike.

The morning was clear but cold. We started off at 8:00 in the morning, and that was almost too early because our road was still in shadow at that hour. It was 12 miles from our cabin to the trailhead and the goats had to ride in the open truck bed with no sun to warm them. Luckily the 11-mile Pool Table Road had recently been graded. When I was there fourteen years before, it was a very slow, bumpy ride because of the terrible washboards. We parked where the 2-wheel-drive road ended. From there, you can 4-wheel to Wheeler, but it’s a very slow, very rough 14-mile drive. The hiking trail is only 7 miles by comparison, and by all accounts it’s easier and takes less time to walk.

Phil and I had a lot of miles to cover, so we kept up a pretty brisk pace. It was seven miles to the Wheeler area, but another mile to actually get to the formation, and more distance still if we wanted to walk around on it. The first few miles of our hike were frosty. We were mostly in the trees and the sun was also mostly blocked by a high ridge. It’s around 10:00 in this photo but there’s still frost on the ground. 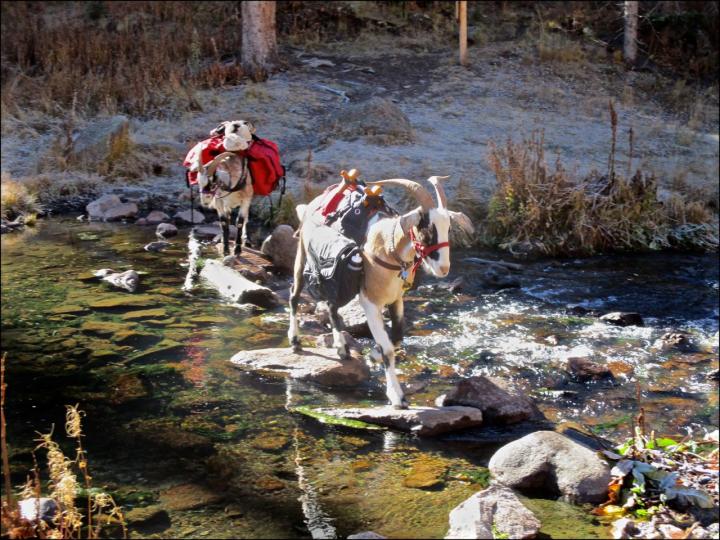 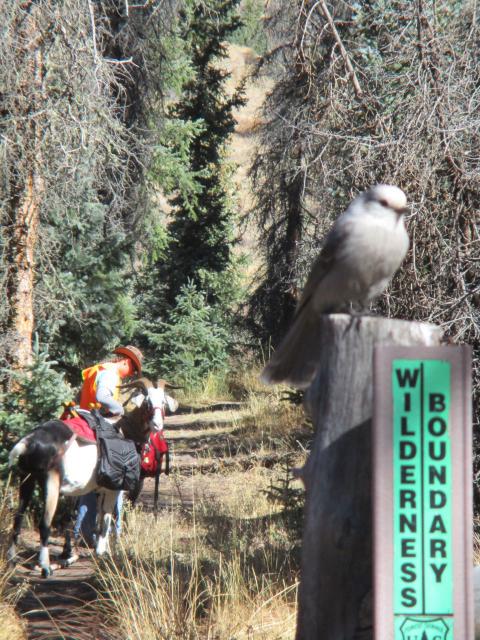 Around noon, we came in sight of Wheeler Geologic Area. This was Colorado’s first National Monument, declared by Teddy Roosevelt himself in 1908. Wheeler was a far more popular tourist destination 100 years ago than it is today. It was known as the “Bryce Canyon of Colorado” and was the most popular tourist attraction in the state after Pike’s Peak. Now a century later, very few people have heard of it and even fewer have ever seen it. 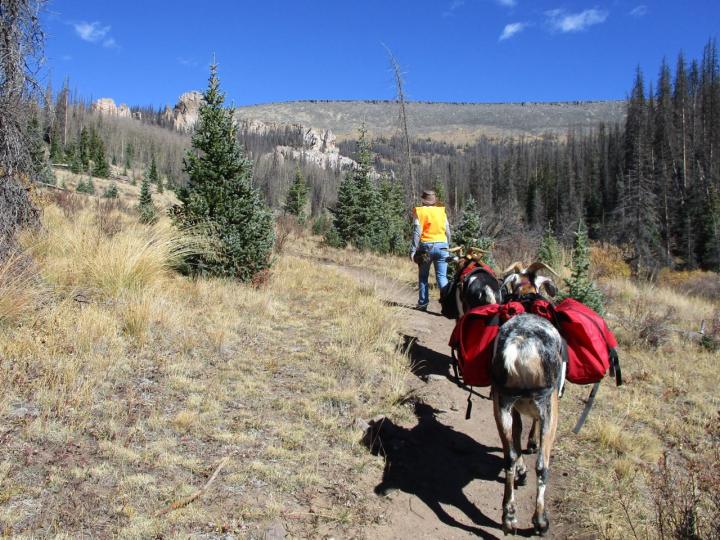 And here we are on this bizarre formation of petrified and eroded volcanic ash. It’s very difficult to describe because it rises out of the trees like an incongruous scar. In Utah, the land changes gradually to the point where you almost of expect this kind of thing around any corner. But not here, emerging out of a spruce forest in Colorado. Like Devil’s Tower in Wyoming, you look at Wheeler and think to yourself that it just shouldn’t be there. And it certainly shouldn’t be that big. 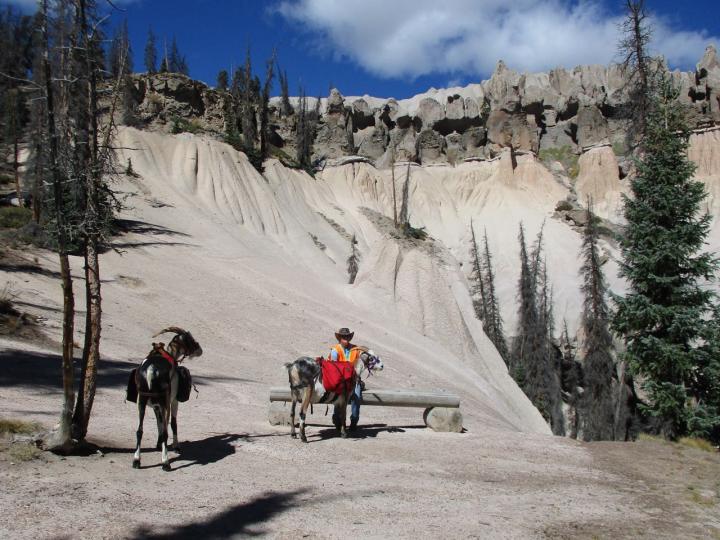 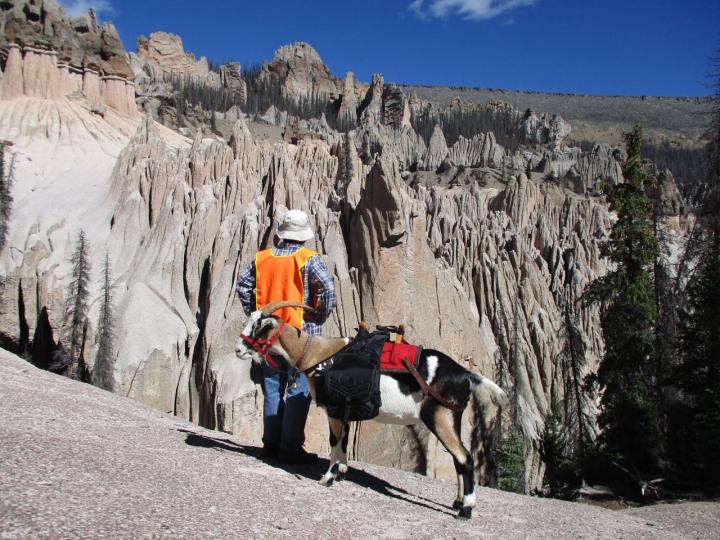 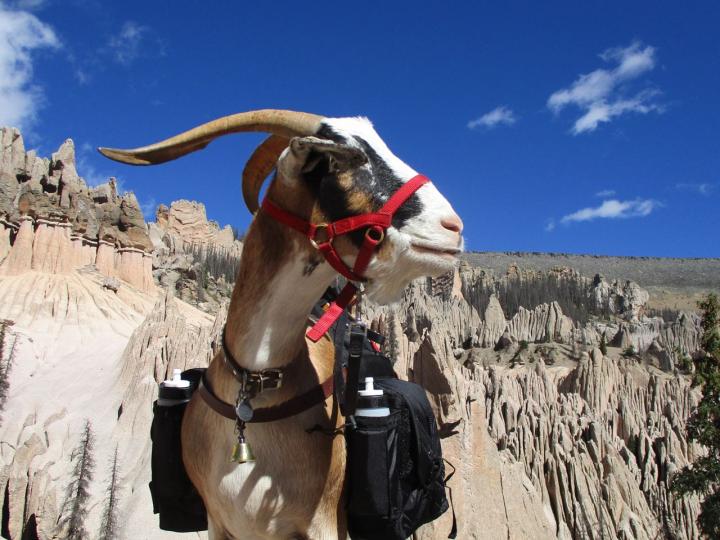 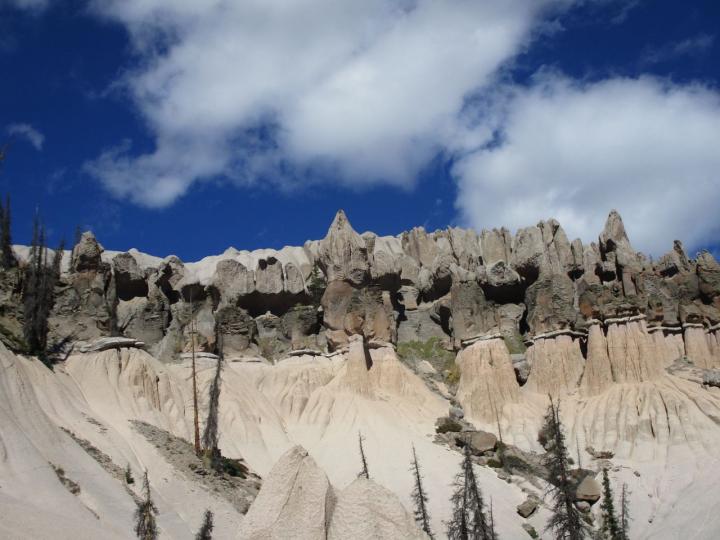 I love this giant stone torch. 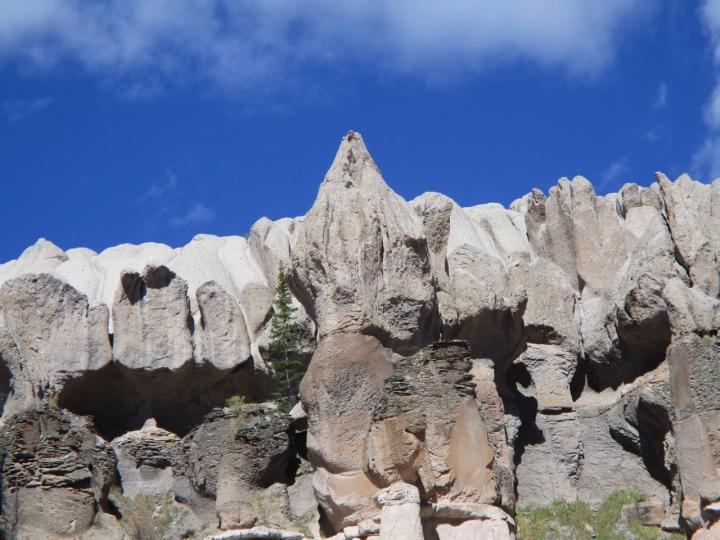 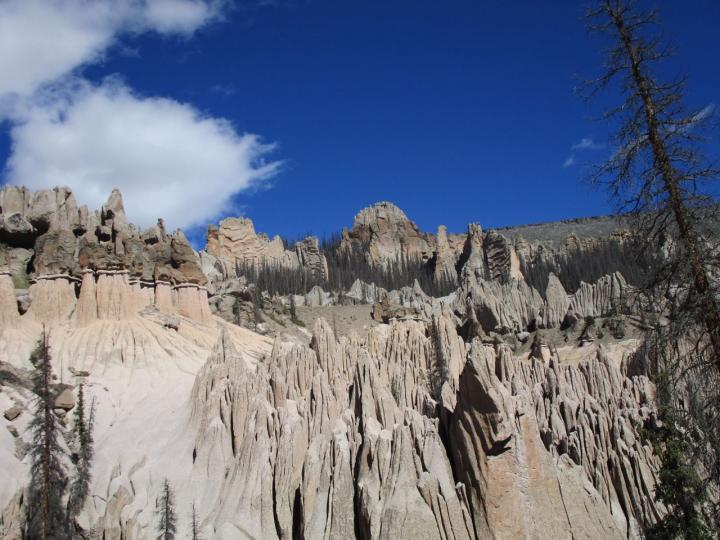 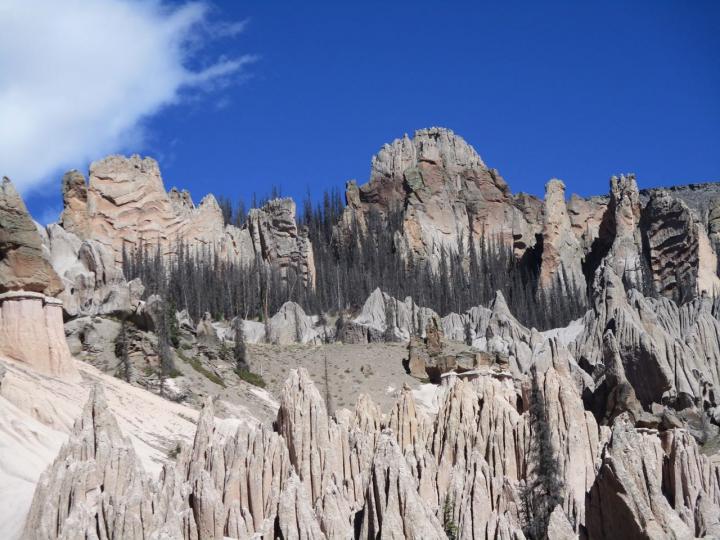 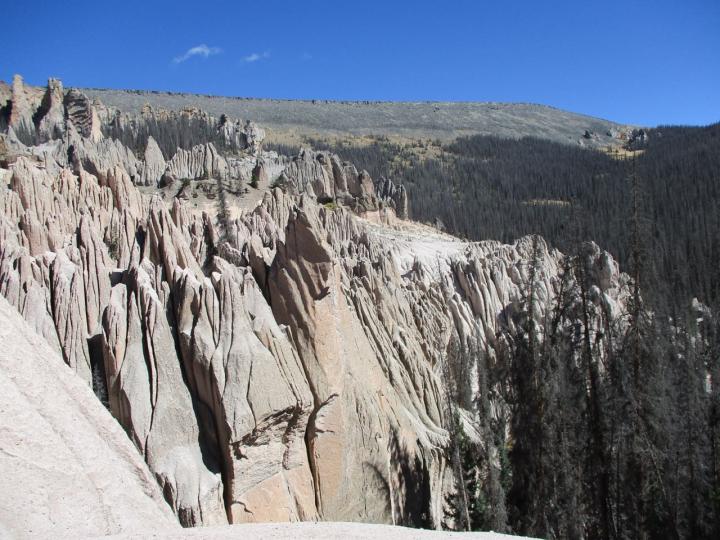 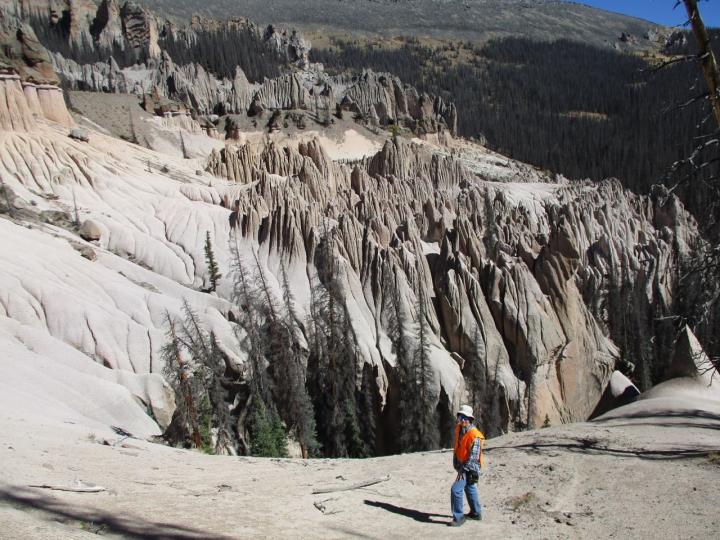 I loved this hollowed-out stump on the way up. 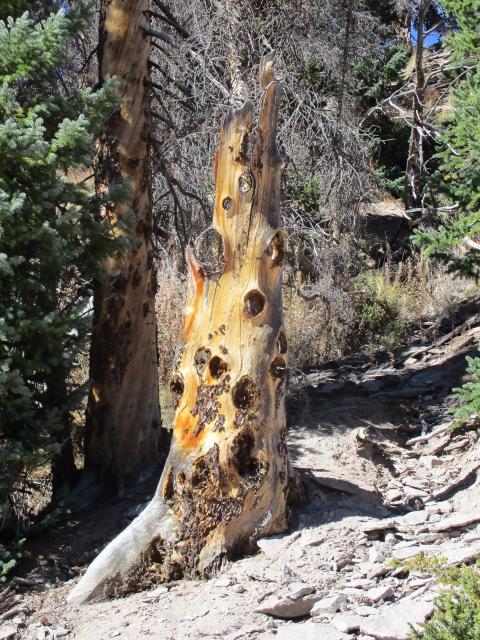 It looks like a moonscape on top. I’d love to see this in the moonlight someday. 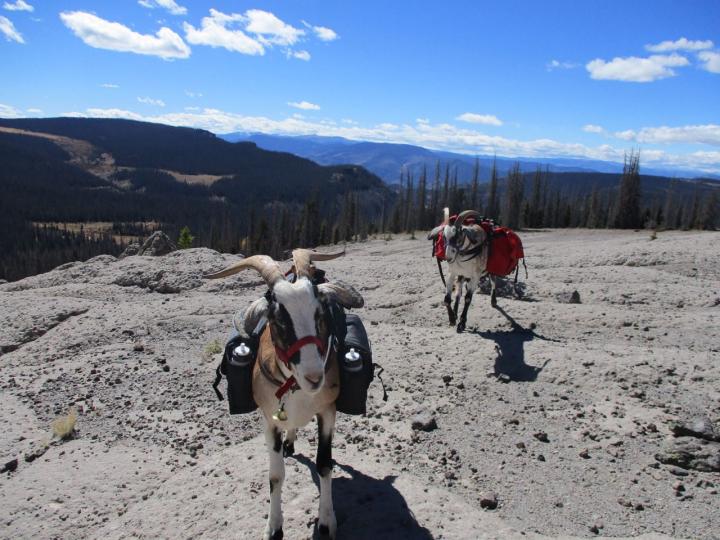 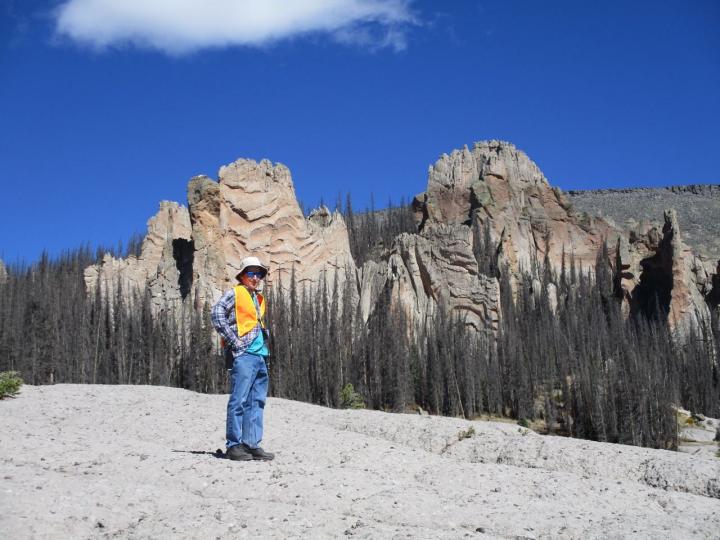 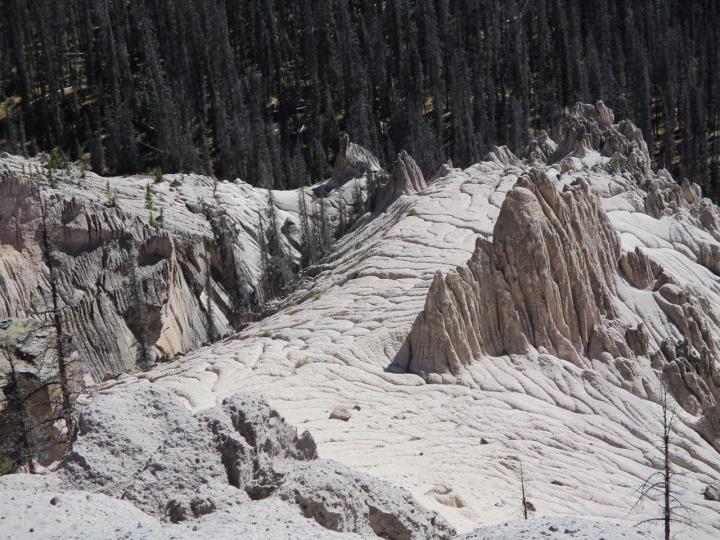 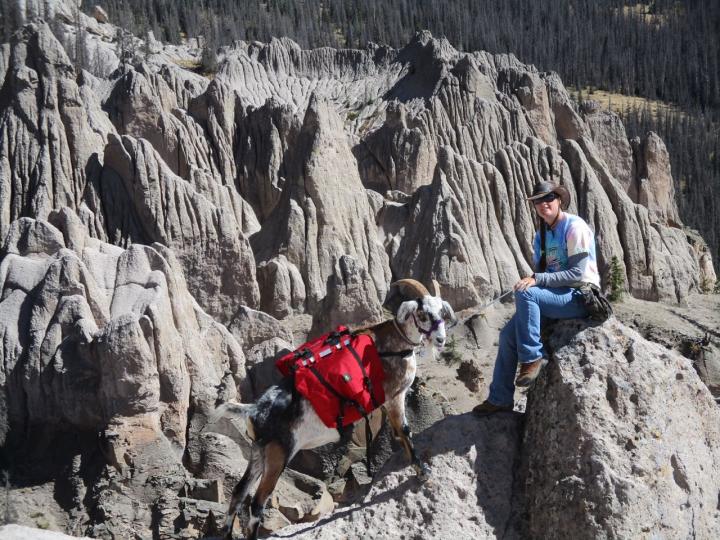 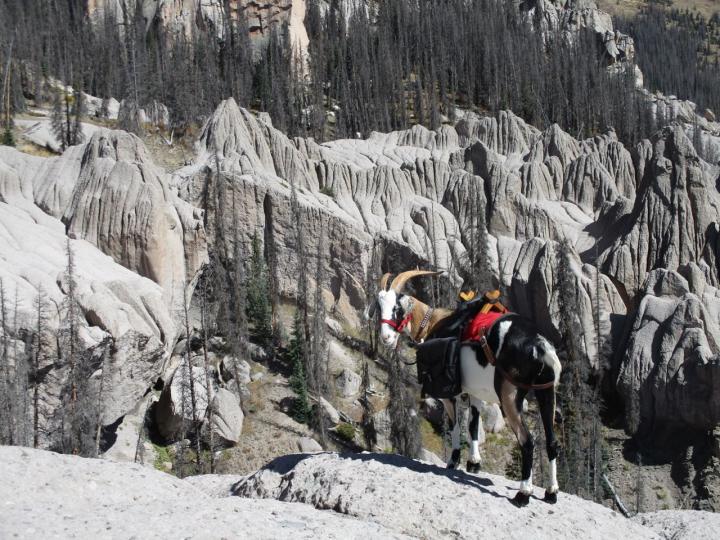 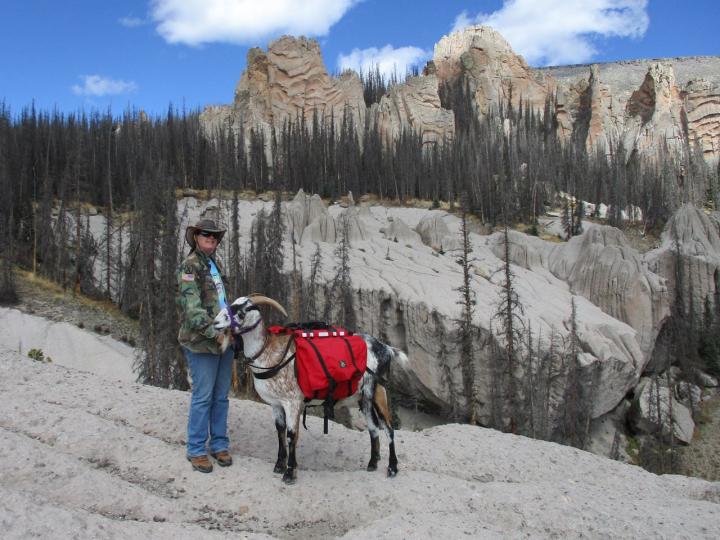 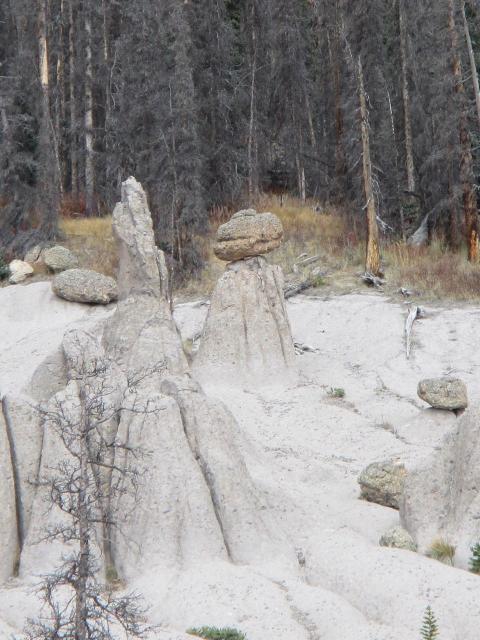 And before we wrap up this adventure, I must insert this blast from the past. Cuzco accompanied us on our trip to Wheeler in 2004. This was back when he still had two horns. 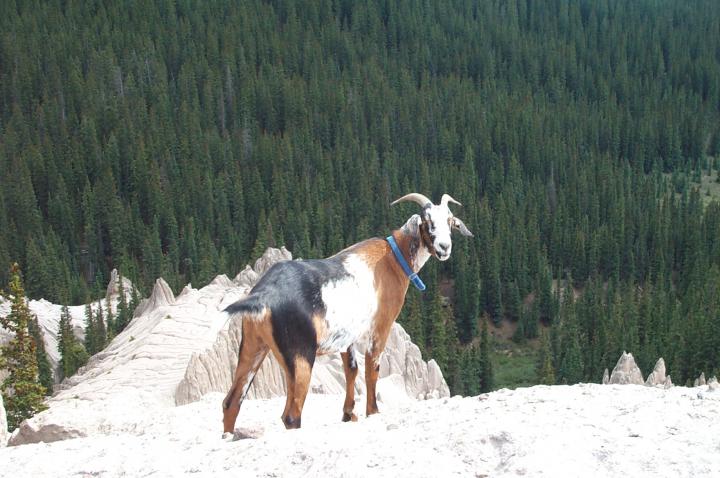 I was a lot skinnier and my hat was not yet faded. 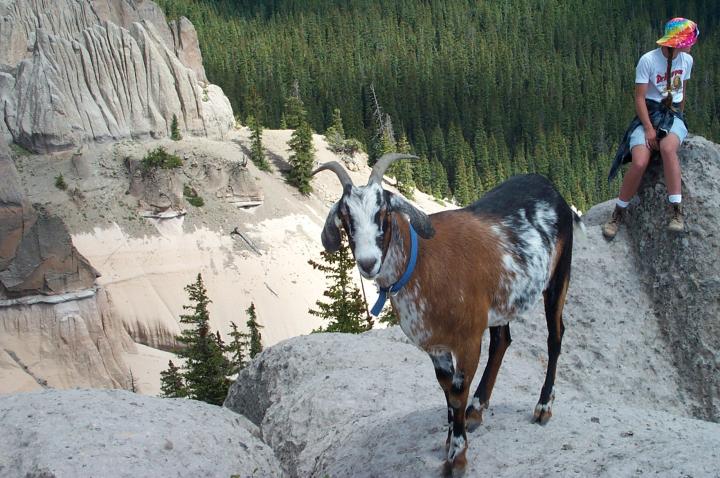 I loved the colors in the woods. Dead trees are eerily fascinating with their weird, twisted bare branches. And then there are the new ones bursting up all around with their thick foliage and rich, green color. It’s as if they’re trying their best to make up for the ones that died. 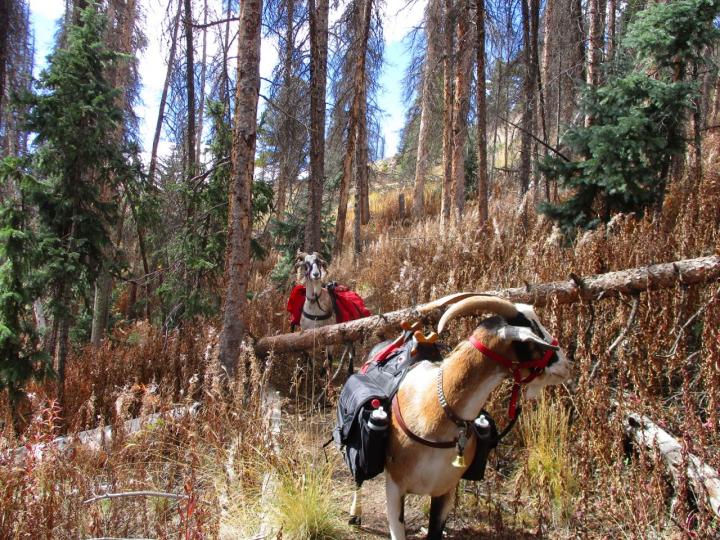 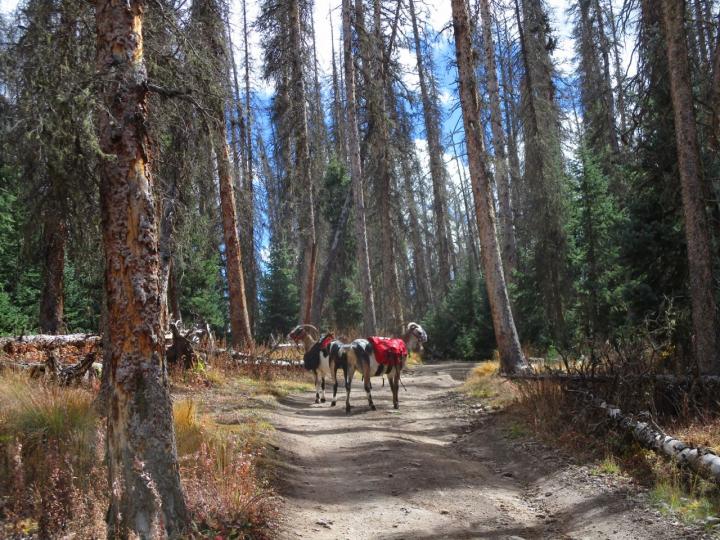 Although it was long, the trail was not steep. A good stretch of it ran through an alpine meadow. We saw lots of elk tracks, and for an hour we heard so much bugling from the surrounding woods we thought maybe there was a national elk convention happening that day. But we never saw an actual elk. 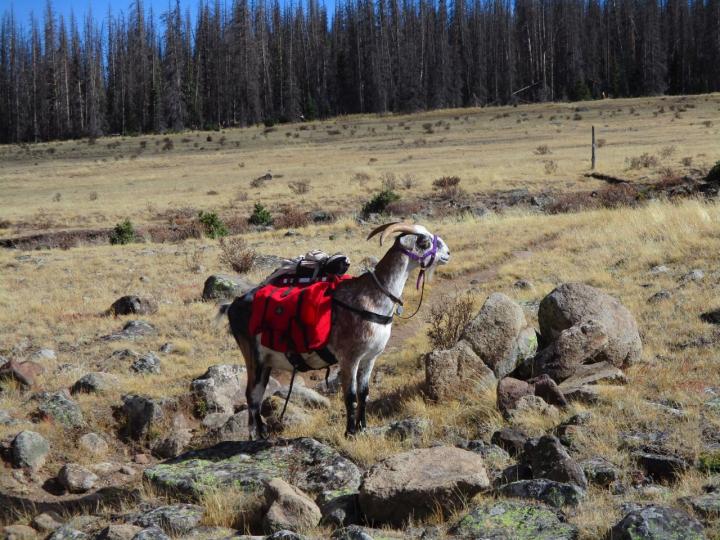 There was one last golden aspen that caught the fading light at the end of day and turned it to fire. Had we been there a week earlier, the entire hillside would have been aflame. 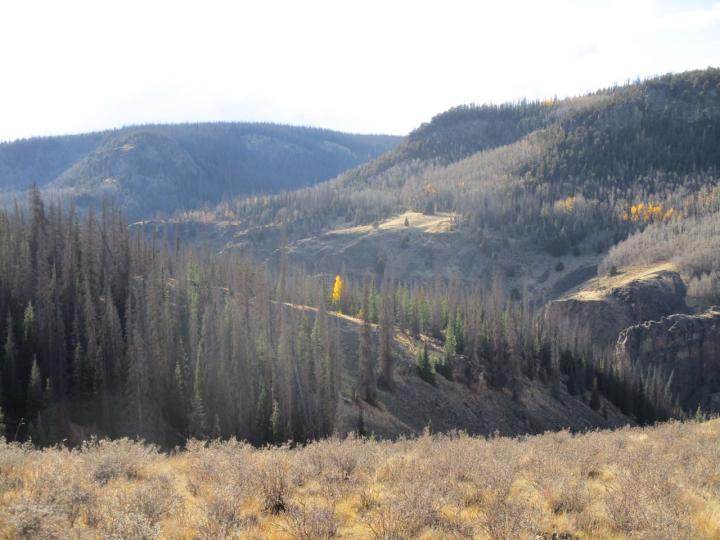 Our trek ended right about sunset, and we arrived at our cabin close to dark. We were exhausted and our legs ached, but it was a wonderful day. We’d hiked a round trip of at least 16 miles with enough time in there to take some photos, eat lunch, and enjoy the scenery. What a wonderful place!