On this particular trip, the journey there and back was half the fun. We got a late start on Wednesday, September 6th and drove well into the night. Although we captured no photos, watching the full moon rise in front of us as we headed east across Kansas was breathtaking. There were windmills on the horizon and the blades cut black and sharp across the enormous orange globe as it came up.

The next day was a lot more fun for us, but I’m not sure about Finn and Sputnik. They adamantly refused to drink any water during those first two days of travel even after I added a strawberry flavor packet to it. But the days were very cool and they had plenty of hay to eat and straw to lie down in, so riding in the trailer and waiting there while Phil and I made a couple of tourist stops was not unpleasant for them even if it was somewhat boring.

The first stop was totally impromptu. I saw a billboard by the highway advertising “Moon Marble Company”. Phil began collecting marbles soon after we got married so the Moon marble factory and museum was a necessary detour. It turned out to be a wonderful hour-and-a-half diversion in which we were given a personal tour of the marble factory by the owner, Bruce Breslow. 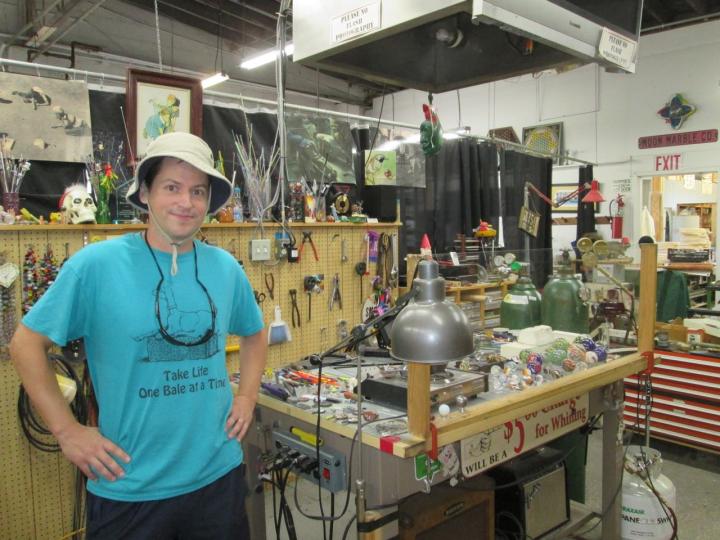 Turns out he has similar tastes in interior decoration as Phil and I. 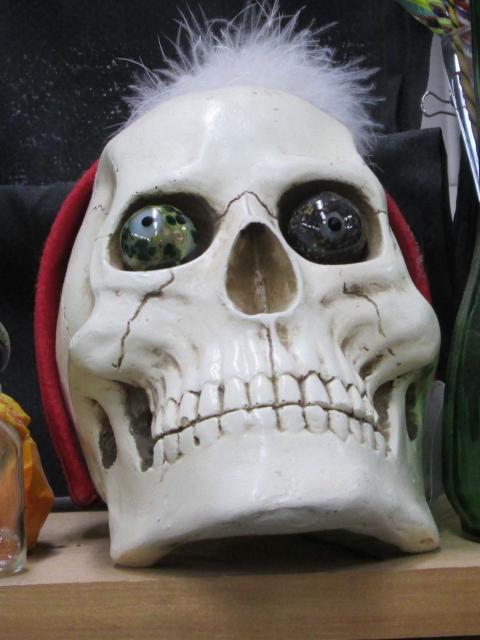 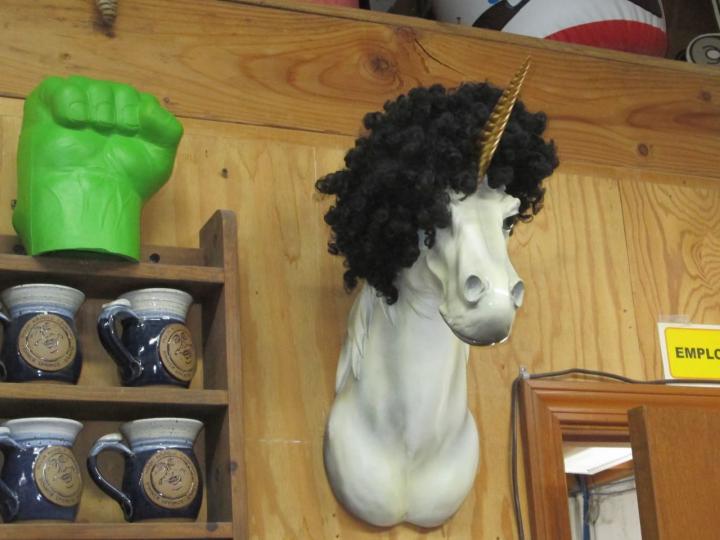 We got a photo of Bruce and Phil standing with some of Bruce’s personal art marble creations. Phil and I bought one to take home. 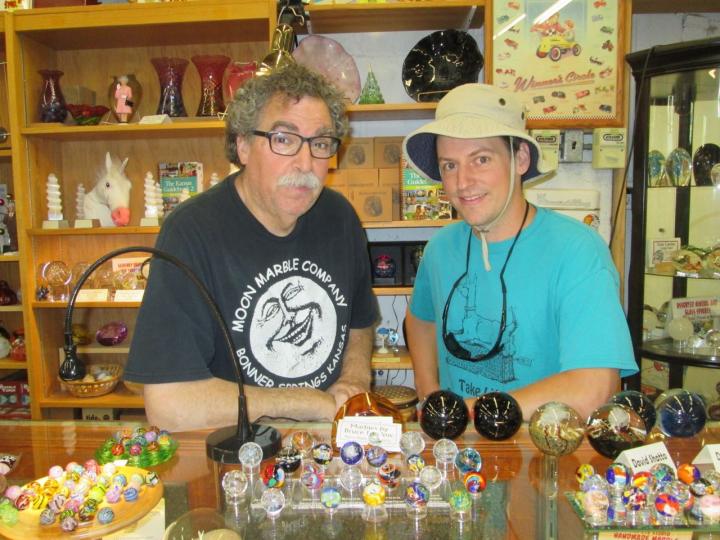 The shop was not devoid of goats either! Not only did I purchase a small goat figurine to bring home, we also saw a vintage “Old Hogan’s Goat” marble game among the museum pieces. 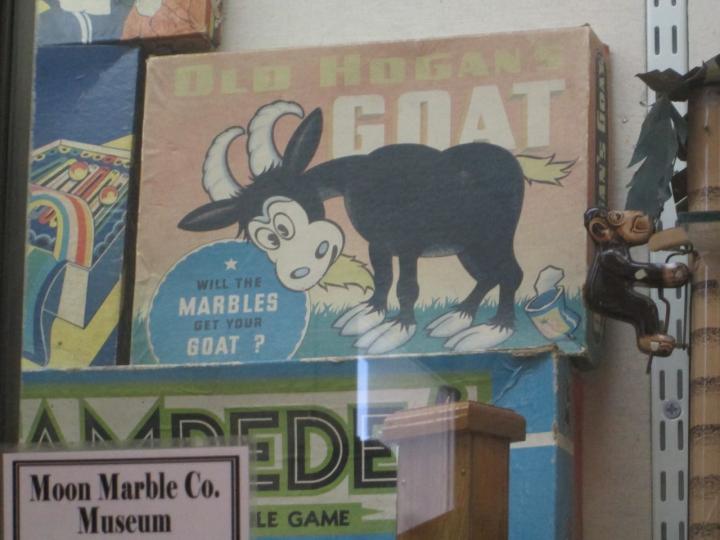 After our tour of the Moon Marble Company, Bruce came out to meet Finn and Sputnik. 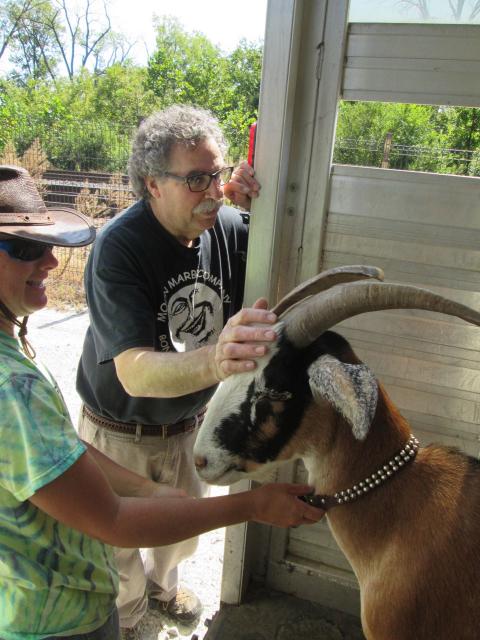 We left Moon Marbles and drove on to Kansas City, MO where we ventured downtown (always harrowing with a horse trailer in tow!), miraculously found someplace to park, and then took a two-hour tour of the Arabia Steamboat Museum. The pictures we took are not worth sharing, but it was an incredible display of wonderfully preserved pre-Civil War artifacts. The steamboat Arabia, loaded with merchant goods, was headed to the frontier in 1856 when it struck a submerged log and sank very quickly in the shallow, muddy water. The top deck remained above the river so no lives were lost except that of an unfortunate mule which was tied on the lower deck. The steamboat sank completely by next morning so none of the goods were ever recovered. However, the legend of the steamboat loaded with Kentucky bourbon continued down through the years and several unsuccessful recovery efforts were made before the Arabia was finally uncovered in 1988. It was half a mile from the current course of the Missouri River and 45 feet down in a place where the water table is only about 15 feet below the surface. Water pumps had to run round the clock during the dig, but the steamboat was brought to light with all its treasure intact.

No bourbon was found (it was probably on the deck so the barrels would have floated away), but many other things came to light that were still as new as the day they were packed in crates and barrels for the journey. Hundreds of pairs of boots, tools of all kinds, nails, dishes, washtubs, pickles, ketchup, preserves, perfume, saddlery, glass for windows, medicines, buttons, beads, flatware, coffee and coffee grinders, bolts of cloth, coats, hats, and even the materials for a “pre-fab” house were on the boat. All the bottled food items are still as good as when they were first put down in jars. The cotton and paper goods did not last, but leather and woolen items remained intact. It was a fascinating display, and at the museum store Phil and I bought a couple of replicas of the bells that were found among the Arabia goods. They have a very pleasant, cheerful ring and are the perfect size for goats to wear.