Phil and I had fun this past weekend on a whirlwind trip to Kansas City and back. Phil has been collecting marbles since the first year we got married and on our goat vacation last fall we stopped in Bonner Springs, KS and visited the Moon Marble Company. It was a fascinating stop and we found out about a marble show they were hosting in March. We decided to take a peek.

Meanwhile, I’d had my eye on some miniature horse carriages at Frontier Equestrian in Jasper, MO–about two hours south of Kansas City. I thought if we brought Finn and Sputnik we could hit up the carriage shop after the marble show and test drive a few wagons. The little garden cart was perfect for training, but it’s woefully small for such big goats and it only fits one rider at a time.

While Phil entertained himself at the marble show, I took the boys out to a local park and spent the day hiking around. It was not a very interesting park, but it was quiet so we got in a lot of off-leash walking. 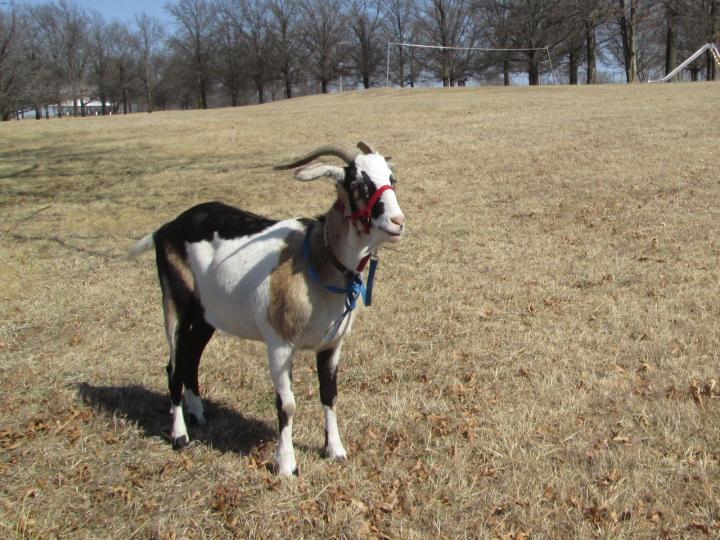 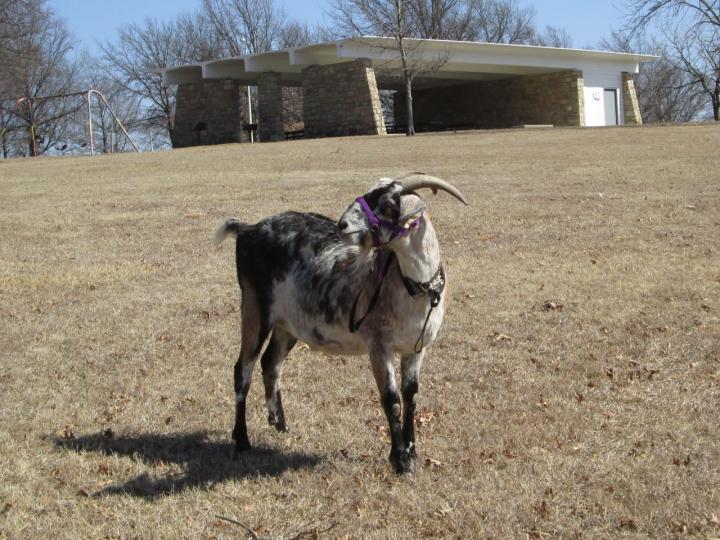 There were playgrounds scattered all over the park, and Sputnik and I amused ourselves by jumping through the swings. If I point Sputnik at a jump, he flies over it. He also leaped over park benches (without stepping on the seat), barriers, and a tall, narrow bouncy horse. Finn is a far more talented jumper than Sputnik, but he generally preferred not to try. I think he was sulking a bit without Phil there. Finn acted terrified of the swings and it took me a little time to convince him to leap through them. Eventually he got the hang of it, but he showed no enthusiasm for this “pointless” activity so I didn’t make him do much. Meanwhile Sputnik was begging for more. He likes pointless activities if they involve cookies!

This pointless activity, on the other hand, amused Finn to no end. We found a set of elevated “stepping stones” on springs. Finn made a beeline for them and didn’t want to get down. He stood on one and spun circles, walked across all three, turned around, and walked back. Sputnik walked over them too but was less enthusiastic, especially since Finn kept knocking him down to take his place. I had to tie Finn out of the way so Sputnik could even try. 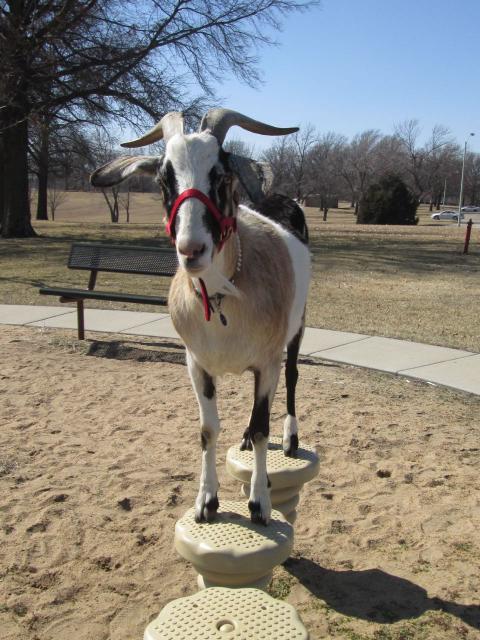 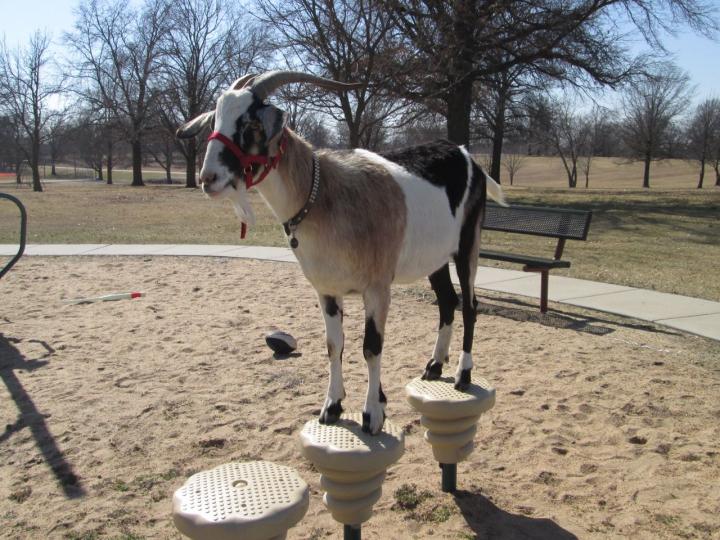 There were some boys in the playground who were quite impressed with the goats’ obedience. I was wearing my army jacket that day and one of the boys asked, “Are those military goats?” 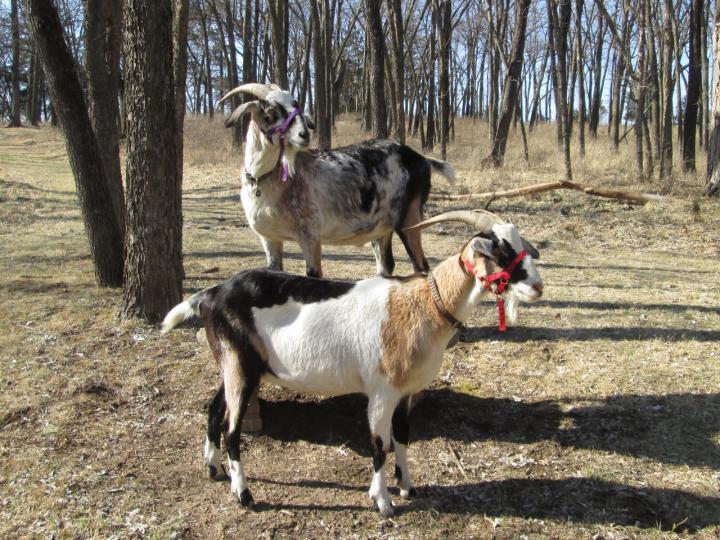 The marble show lasted two days, and on the second day I took the boys walking on the Indian Creek trailway that runs for over 20 miles around Kansas City. We only explored part of it of course. There were more people there than at the park so I spent more time stopping to explain why I had goats parading around the city on leashes. Finn and Sputnik were very well-mannered for all of it so it was quite a pleasant day. Thinking back, a walk like this would have been miserable just two years ago. I’d have had a terrible time trying to control both of them by myself, and I’d have had to deal with balking, spooking, bolting, fighting, and trying to go back. Our boys have come a long way in their training. They walk nicely beside me so I can hold a leash in each hand without fussing. They obey voice commands very well, so if one needs to speed up or slow down I can control him with a word and a slight tug on the leash. They don’t balk or spook at dogs, bikes, baby strollers, sirens, or blowing trash. Well-trained goats are such a joy to walk with and I don’t think I realized how good our boys have gotten until that day. Training takes time and progresses in baby steps. Sometimes it’s hard to see those small improvements until one day you suddenly realize how good your goats are–that they finally feel like they’ve “arrived”. Cuzco had good leash manners and I sometimes lamented that Finn and Sputnik were a lot of work compared to good old Cuzco. Now Finn and Sputnik are better behaved than Cuzco was!

On Monday we stopped at Frontier Equestrian in Jasper, MO.

What is Finn staring at? 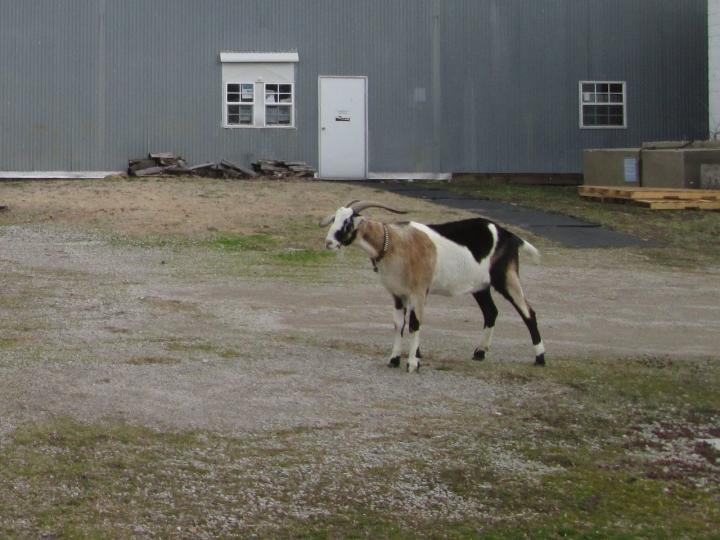 Whoa! Two life-size Shire horse statues stood guarding the store entrance and Finn was rather terrified of them. They horses seemed a bit suspicious of him too. 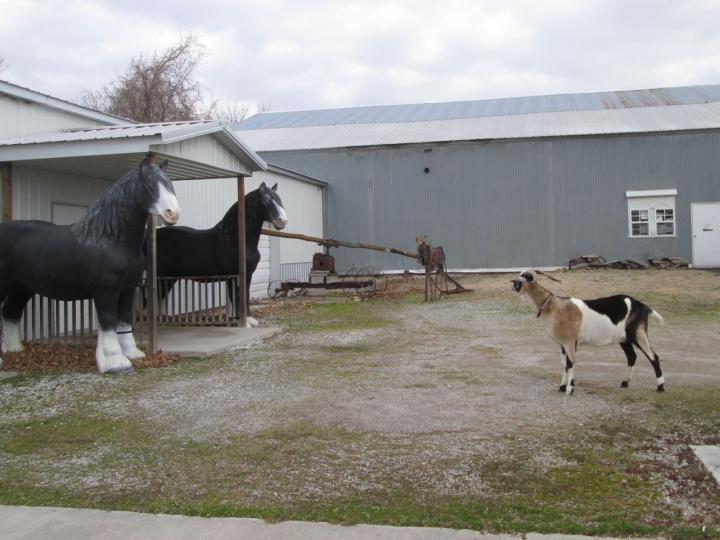 Sputnik didn’t notice them until I walked him right up under their noses. Then he looked up and went “Oh my!” 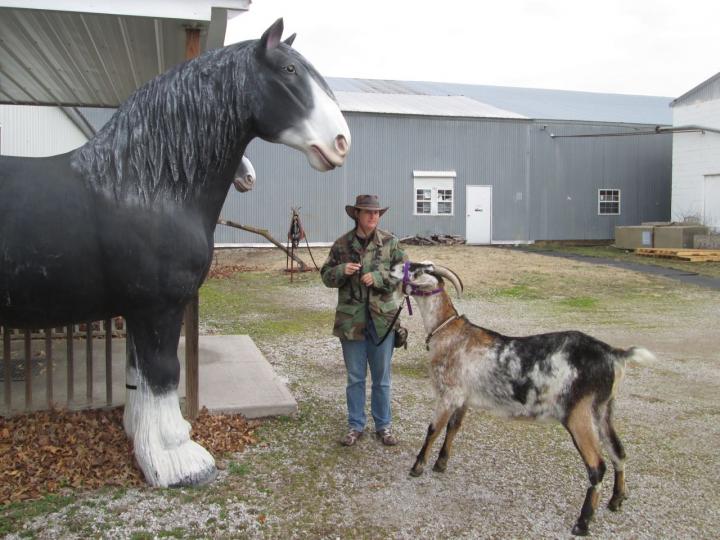 The store didn’t open until 11:00 so Phil and I had almost two hours to burn. Jasper is a small town that appears to be slowly dying. There was no one on the roads so we walked up and down the streets with our goats off-leash. 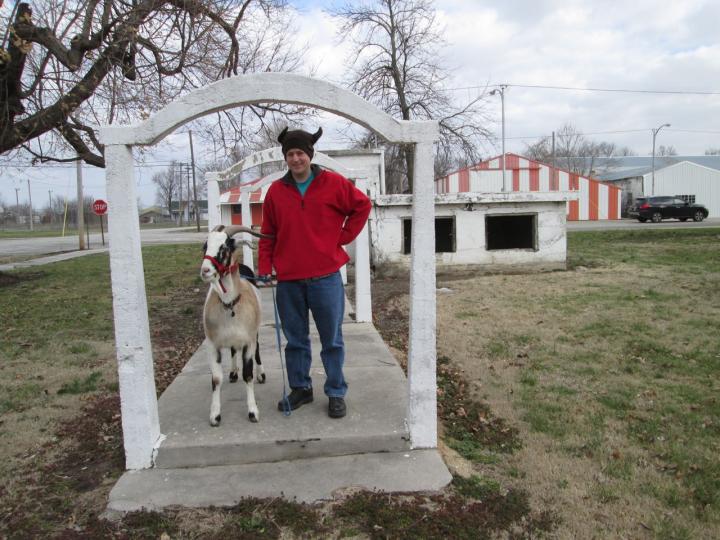 Some people keep giraffes in their yard instead of goats. 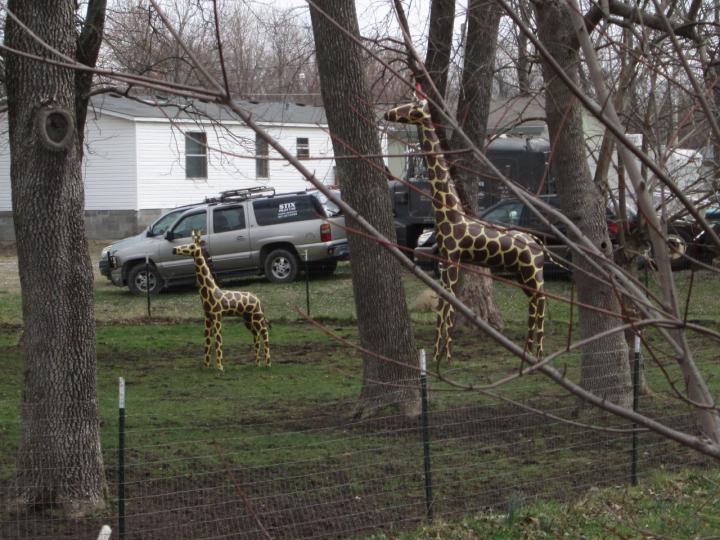 I think this Jasper monument is enhanced by the addition of a large, noble goat. 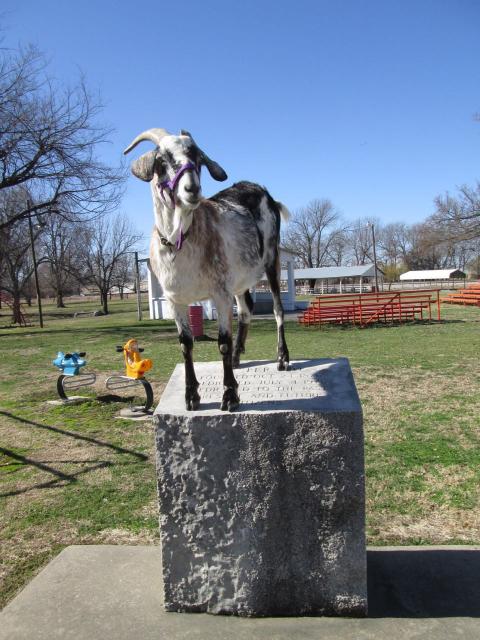 When the carriage shop finally opened we test drove several models. This one was lighter weight but it just didn’t cut it. Too low for one thing, and it had no suspension for another. There was also something not quite right with the team pole and doubletree. We decided to pass. 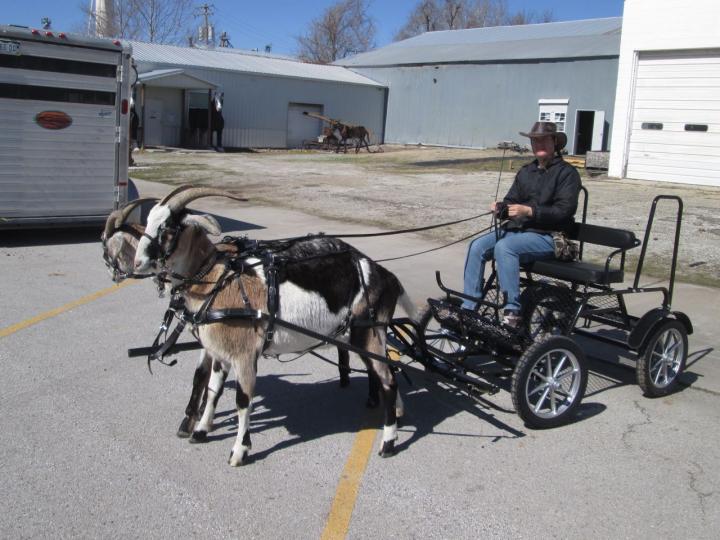 We settled on this two-seater. After we tried it with two goats, I hitched up Sputnik to see if he could manage it by himself. He had no trouble working up a good trot. I need to shorten the shafts a bit, but they’re the perfect width and height for a goat. This carriage has good suspension and is a very smooth ride. I can’t wait to try it out next weekend! I have to make a yoke for it first. I think we’re really going to enjoy this little wagon! It would even look good with a four-in-hand should we ever have enough goats. 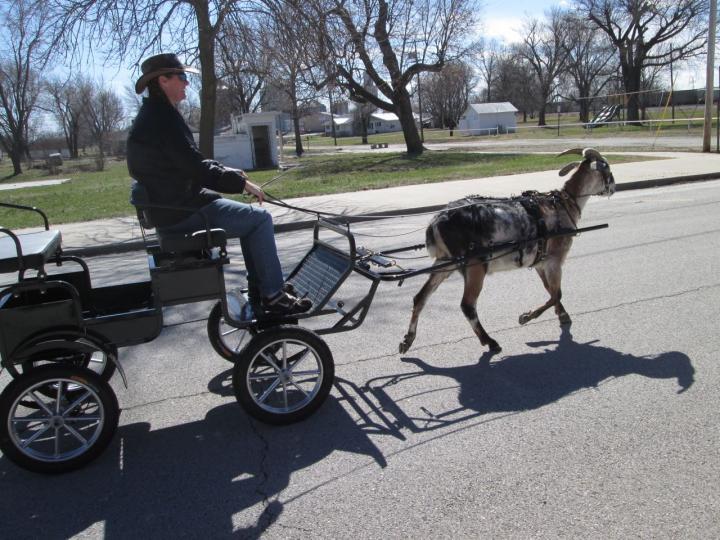