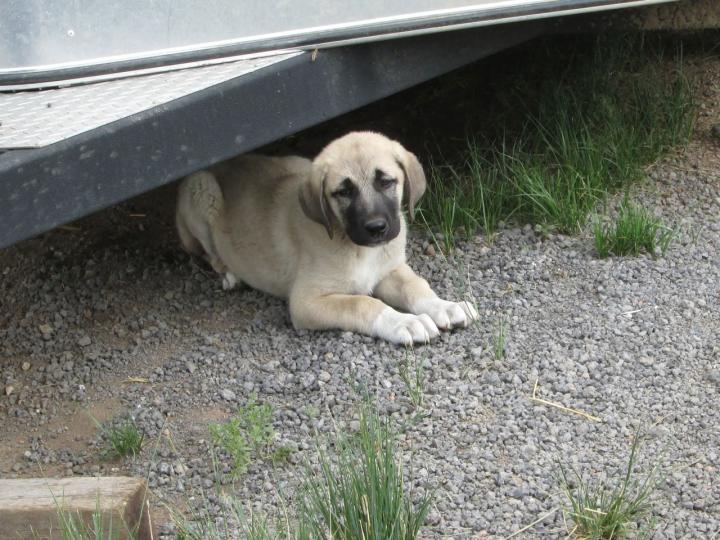 He’s named in honor of the recent first close-up photographs of the most distant member of our Solar System. He’s a little forlorn right now and I keep hearing him cry and howl, but hopefully he’ll settle in soon.

Pluto was curious about the goats at first, but the moment he went to greet them they all went into panic mode and it was contagious. Now the goats and puppy are terrified of each other. The goats magnetized into a tightly-packed goat block any time Pluto crept out from beneath the horse trailer he hid under all day. This is about as close as any of the goats came to saying “Hi”. 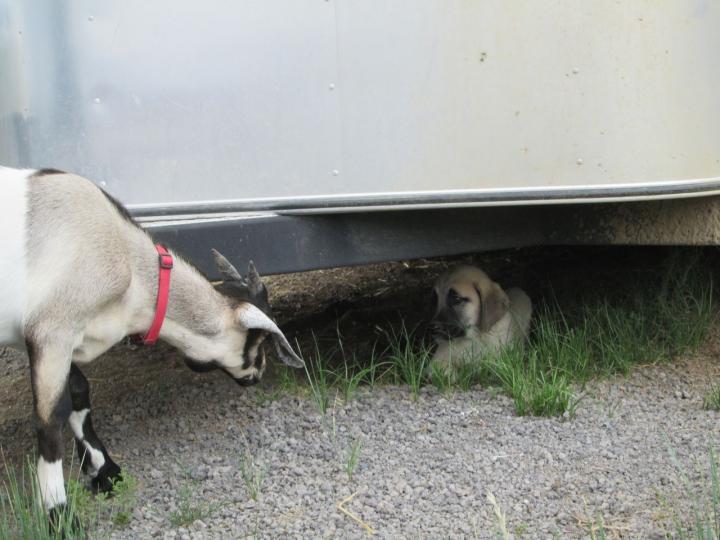 Pluto is an Anatolian Shepherd, and we got him because we’re not sure what our dear Daisy’s future holds. She has had mystery health problems since April and three different vets haven’t figured out what’s wrong. The trouble seems to be in her hips and back, but there is no actual joint problem anyone can find. We’ve had x-rays taken and we had her on anti-inflammatory pain killers at first, thinking maybe she’d been trampled by one of the horses. But she got worse so we went back to the vet. The lameness moved from leg to leg so we thought perhaps we were dealing with a tick-borne illness and put her on a four-week course of antibiotics back in May. It helped a lot and she was almost back to normal until late June when she went lame again. We put her on a different type of antibiotic for two weeks with no effect, and now we’re back to the one that seemed to help the first time. She’s been back on this one for one week and so far she’s still getting progressively worse, so I’m not confident we’re going to beat this thing. She’ll be getting blood work done this week and I hope we can figure this out and make her better, but Phil and I decided that if this is the end of the line for Daisy, we’d better get a pup ASAP so she can start training it while she’s still able.

So far she’s doing a good job. She’s polite with Pluto (I think she secretly loves him) but she’s trying to maintain a cool detachment until he knows who’s boss around this place. She can’t fool me! Still, she’s doing a good job as disciplinarian. Pluto tried to eat from her food bucket and Daisy snapped and snarled at him. After one meal, I couldn’t even feed him from her dish after I put her out of the pen. I had to get him his own fresh bowl from the kitchen because he’s terrified even to clean the bottom of The Big Dog’s bucket. I’m very pleased that the pup is inspiring Daisy to finish her food. I’ve had a hard time getting her to eat enough recently because she doesn’t feel good and she’s dropping weight badly. With Pluto hovering near her food bowl, Daisy is determinedly forcing down every morsel.