I’ve been busy, busy, busy lately! Monday I drove up to Longmont (about 4 hours) to teach a harness goat class to the 4-H utility goat group up there. It was a lot of fun and a great turnout. I took Finn, Sputnik, and Tigerlily. Before the harness class, we also did a little obstacle course practice. I gave Tigerlily to a couple of young girls while Finn took turns first going with a grown woman and then a man. He was quite good and did all the obstacles with nonchalant ease. Tigerlily took a bit more convincing. She was a little spooked by the crowd, but she managed to do most of the obstacles. I took Sputnik around. He was also spooked by the crowd and wasn’t too sure he wanted to cooperate on the obstacles, but he did most of them eventually.

After dinner I taught the harness class. I used Tigerlily to demonstrate how to train a goat to drive who has never been driven (by cuing from behind with a whip instead of just pulling on the halter to move forward). I’d never done that with her before and she picked it up very quickly so I felt it was a good demo.

Next, I used Sputnik to demonstrate how the harness works, how it should be adjusted, and how to hitch to a cart. I drove him around the horse arena as a little demonstration. He did very well, and I planned to harness Finn next and let folks get a feel for driving, but plans changed when several people decided they were ready to bring their own goats in for driving practice. They were all dry does, and the kids had fun teaching them to respond to a whip tap as their “walk on” cue. Then we tried on harnesses and adjusted cart shafts and got a couple of them going with their carts. I spent a lot of time teaching kids how to hold the reins and whip properly together. The goats had been handled a lot so the kids were able to start driving their goats around the arena with the carts that night, which was very rewarding.

One lady brought a miniature horse cart that she wanted me to look at. She thought it would be too big for goats, but Sputnik proved her wrong. The highlight of the evening was after everyone else had left, and I took this lady’s miniature horse cart and hitched it to Sputnik. We went out to the paved road so we could have a smooth ride and I drove Sputnik up and down the road, first with each of the lady’s daughters and finally with her. I let her take the reins and we trotted up and down and turned this way and that. Sputnik was a model citizen–quick to respond to voice commands and light whip cues, and feather light on the reins. What a good boy! It was fun to be able to drive him in a cart made for two. The one-seater goat carts we have are actually a little small for him at this point and the shafts tip too far up even with the shaft loops on the bottom hole. Sputnik pulled two adults easily. Unfortunately, I was unable to get photos of that event.

I got home on Tuesday and packed the truck and trailer for the annual Pueblo County Fair packgoat class. Phil and I set up a course in the indoor horse arena and we brought Finn, Sputnik, and Tigerlily. We got photos, but unfortunately not many folks showed up this year. I’m not sure why because I was under the impression that this year’s event was better planned out and advertised than in previous years.

Sputnik and I tested out the course before people showed up. Sputnik did great on most of the course, but I’m always especially pleased when a goat ground ties nicely. He stood beautifully without being held while I donned the raincoat, then took it off and slung it over his back, and finally walked back to the fence to put it away. 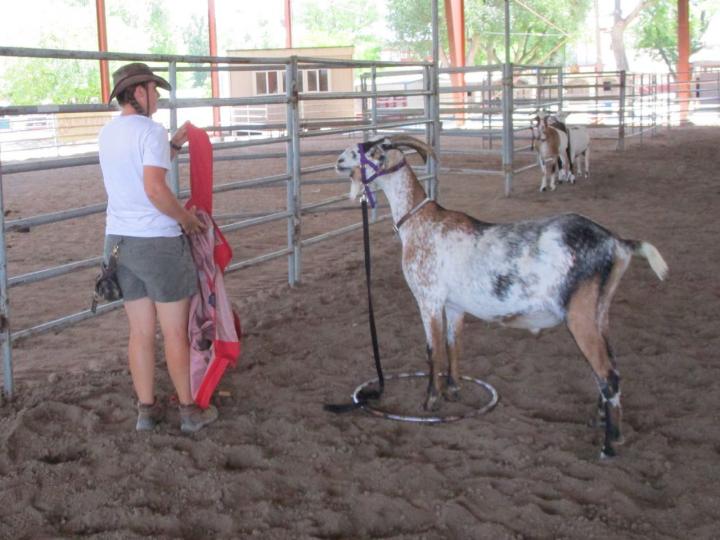 We also had a series of walk-under poles. This obstacle was challenging for Finn. He was wearing his crossbuck saddle and kept getting himself stuck, first on the front crossbuck and then on the second one. This is something he really needs to work on for the trail because ducking under things is not his strong suit. 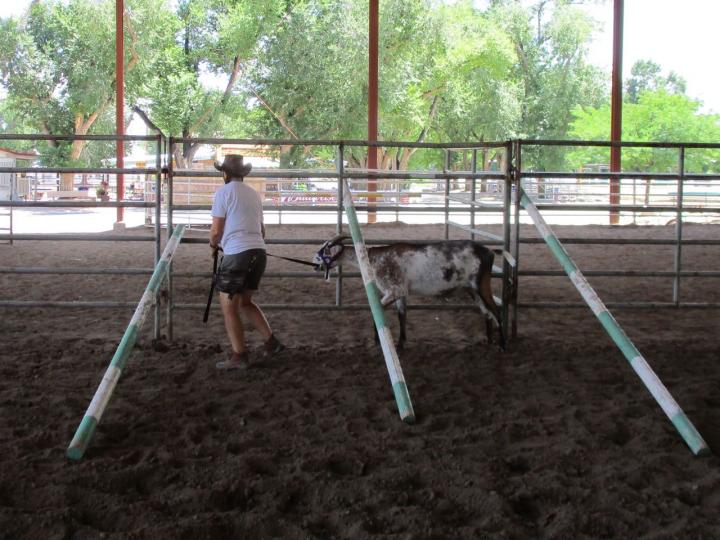 This was probably my favorite obstacle. We used a big tarp to make a “river” complete with driftwood step-overs which flowed into a “pond” with real water at the end. All of our goats actually did this obstacle remarkably well. 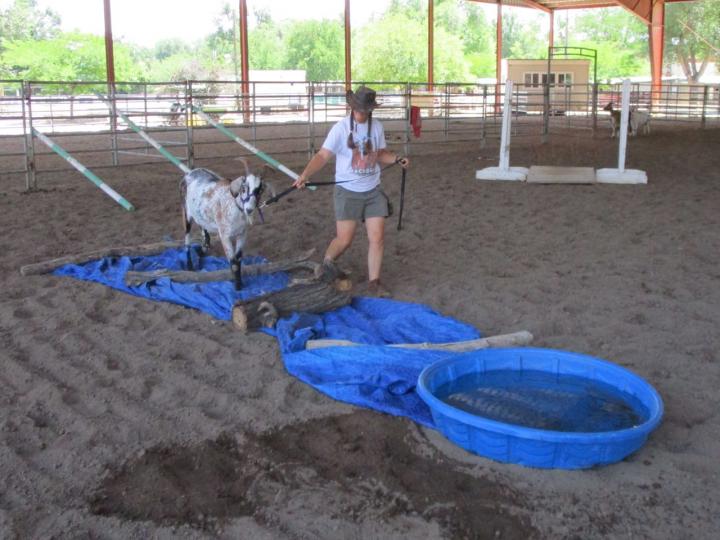 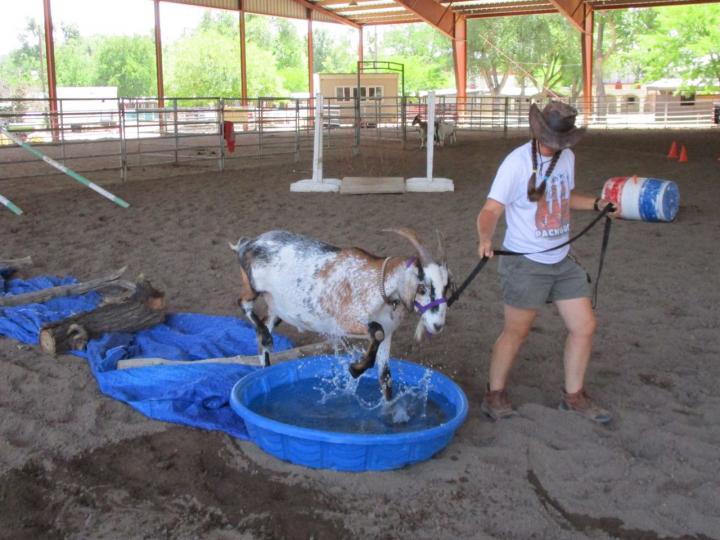 We had a low plank bridge. This one was very easy and fun for all our goats. 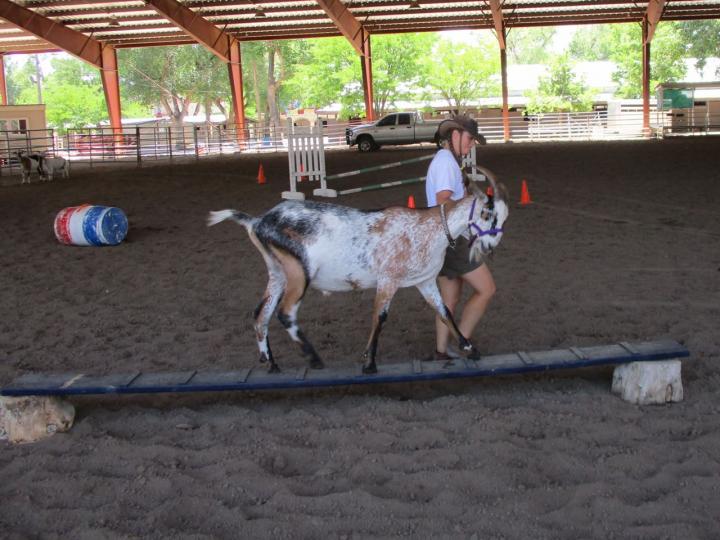 Then they had to step their front feet on this high log. Sputnik didn’t particularly like this obstacle. 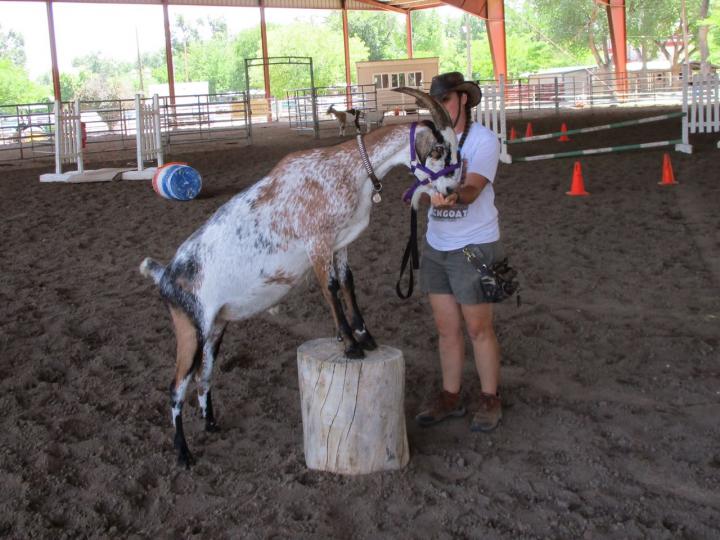 A few folks showed up and I did a brief saddle fitting class to start. 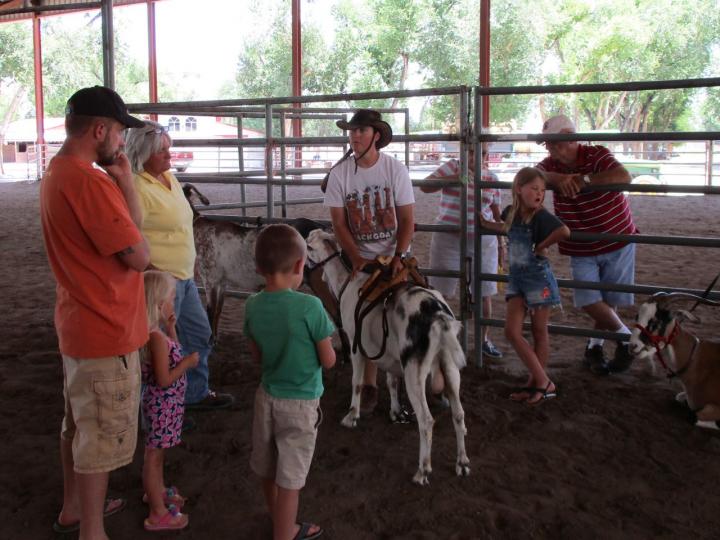 Sputnik wasn’t convinced that this jump was worth the effort. 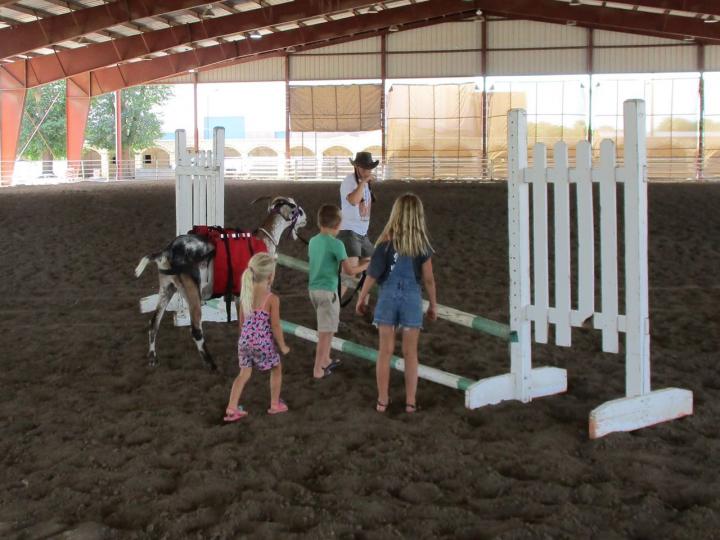 I had to do a bit of encouragement from behind to get Sputnik to trot the cones for his enthusiastic young handler. 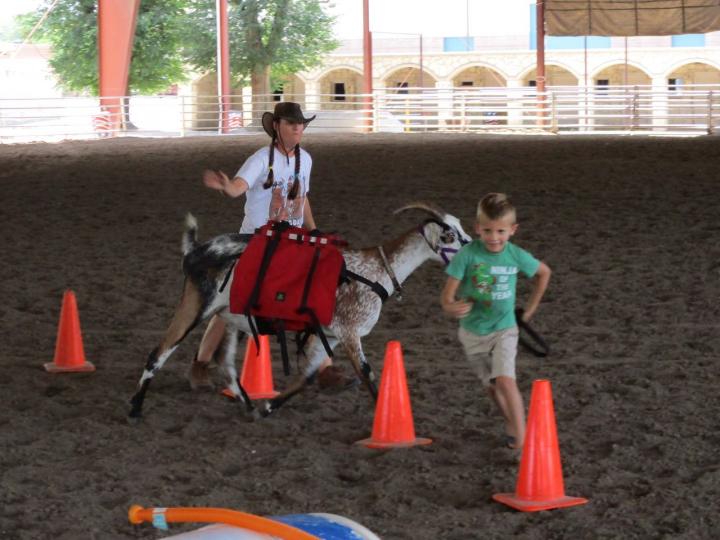 I love how the boy holding Sputnik’s lead is almost through third pole and has no idea that his goat is still standing at the second one saying, “Do I really have to do this again?” 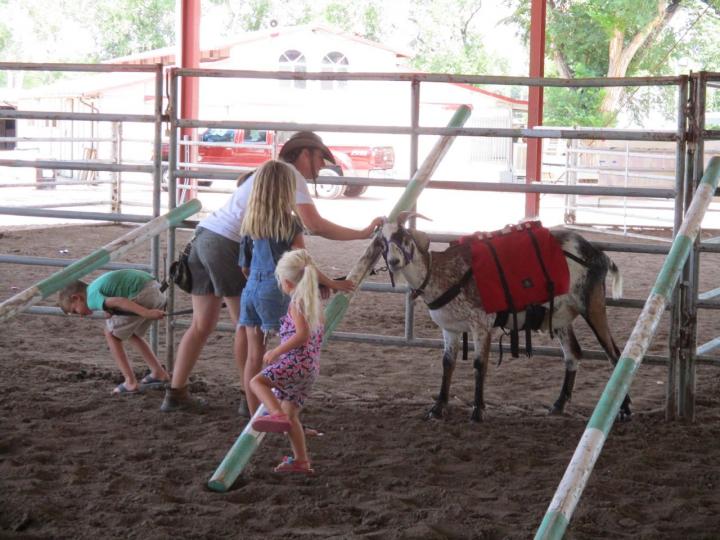 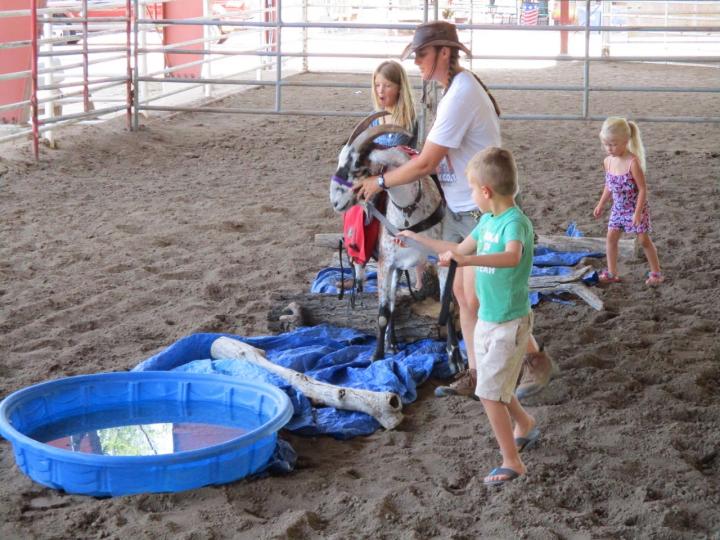 The little girl in pink “led” Finn around the course. He did a lovely, enthusiastic jump for her. 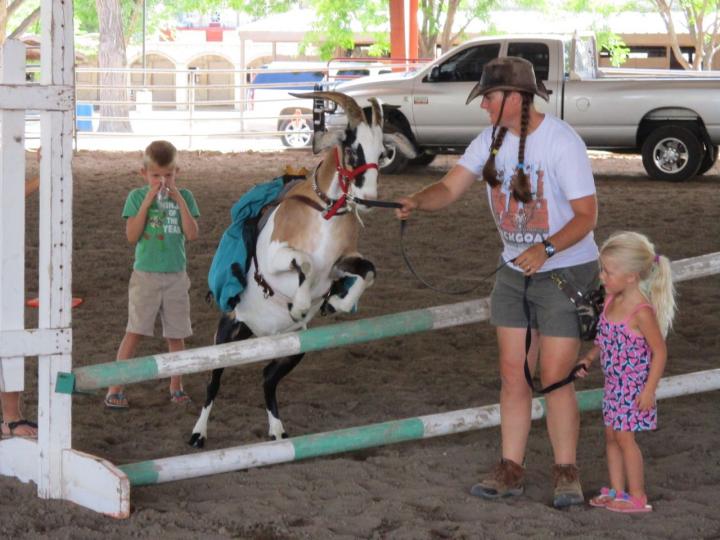 This was a funny obstacle–the kid had to straddle the barrel and wave the orange noise-maker with one hand while holding the goat’s leash in the other. It makes a loud whistle when you spin it, so the idea was that the goat has to trust you and stand there while you wildly wave a loud, whistling object nearby. The goats were a bit befuddled, but not frightened. 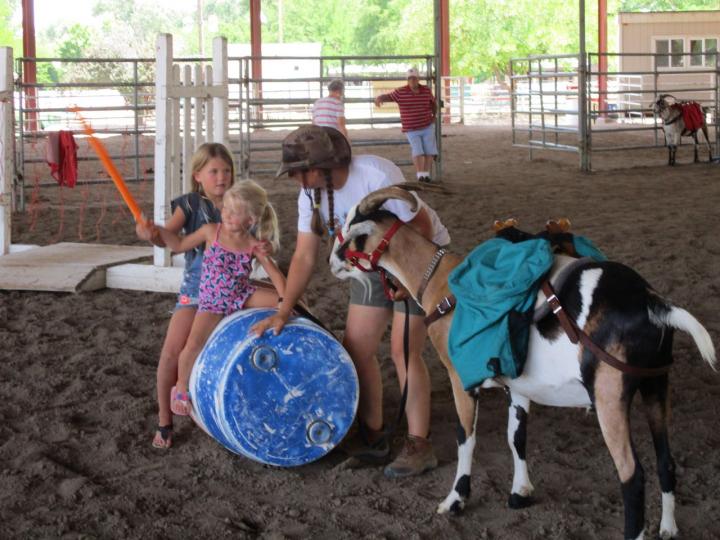 Finn did great with the water crossing, the bridge, and the log. I love how his very young handler is so attentive. She was totally convinced that she had full control over Finn all by herself. 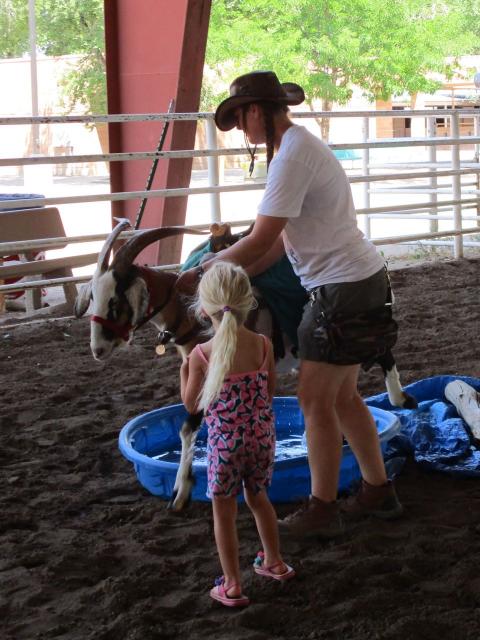 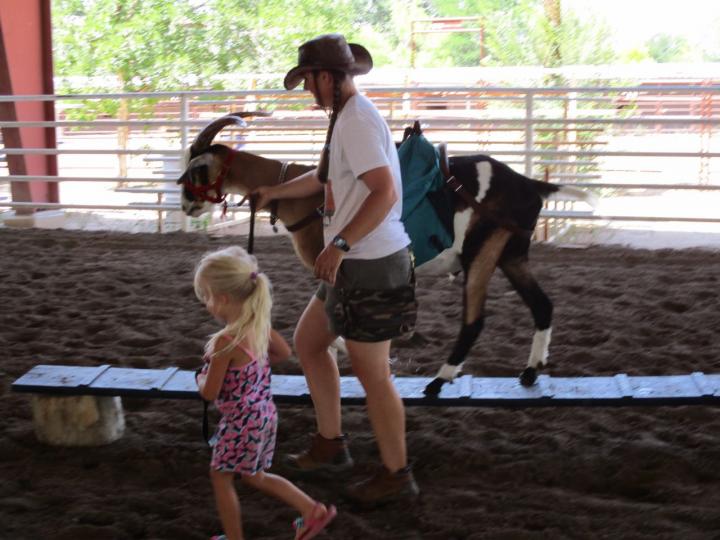 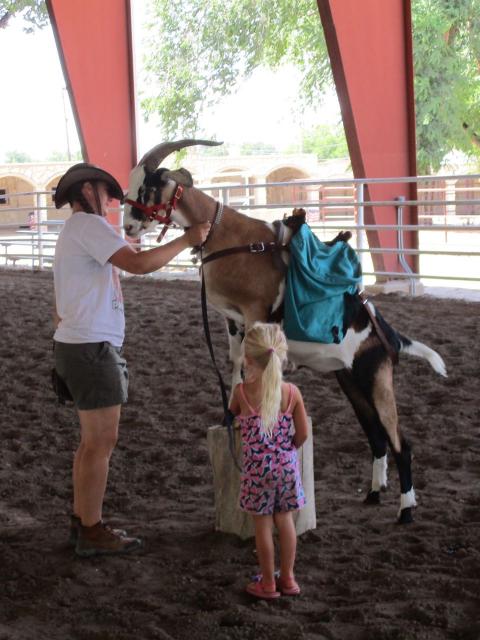 One of the funniest episodes during this event was when the little boy in the green shirt got to the end of the course. The final “obstacle” was they had to run up to a barrel and “ding” the service bell on top. He was so eager to ring the bell that he dropped the leash and left Sputnik standing by the final obstacle while he took off at top speed for that finish bell. I was standing right there and almost grabbed the leash but instead I decided to see what would happen if I didn’t. (I was pretty sure I already knew, but I wanted the kids to see.)

The kids turned around and realized that Sputnik was loose and was already sauntering off to join the goats at the other end of the arena. All three kids turned and chased after Sputnik at top speed and top volume. Naturally Sputnik took off in a panicked run, kicking dirt up behind and gracefully clearing the jump which he had refused to leap over before. He stopped near Tigerlily, but when the kids kept coming he nearly took off again. I hollered at them to hold up and we had a little discussion about not dropping the leash when you need to hold onto your goat, not running after loose animals, and not screaming. I felt it was a pretty good object lesson, and hopefully it sticks because not all environments are safe like this one.