Delilah went out to forage with the other goats this morning and left her babies alone in the shed. Pluto was concerned and went in the pen with me to check on them. He is totally enamored with these kids and spent time gently licking each of them. When one jumped on him, he collapsed onto the ground and rolled over. At one point he had three babies crawling around on his belly. I went inside and left him with them. I wanted to see how he’d act while “unsupervised”. Unbeknownst to Pluto, I had him on the Goatoscope. 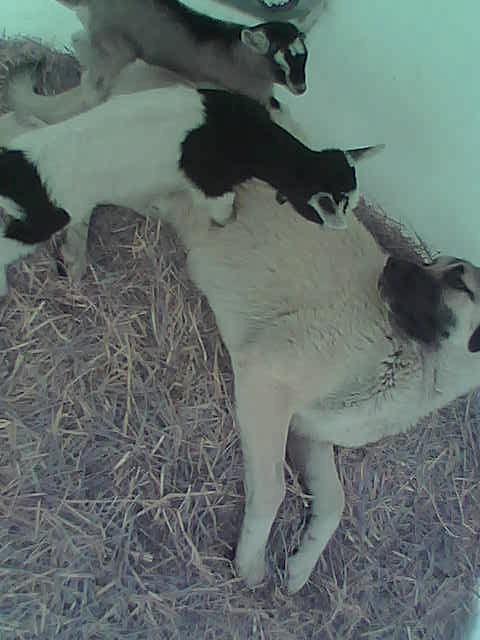 I enjoy watching him interact with the kids, but he is definitely still a puppy in training and not to be totally trusted with them. I kept an eye on him in the monitor, and after 10 minutes or so the kids began to annoy him by clambering onto his face. His response was a very light “snap” to push them away. That might be acceptable discipline for puppies, but not for kids! I opened the window, waited for him to do it again, then hollered at him the second he opened his mouth. He jumped like he’d been stung and immediately slunk out of the pen with his tail between his legs. I want him to enjoy the kids, but he must learn that they cannot be treated like puppies. I’ve read that these dogs do not really leave the puppy stage until they are a good two years old. Pluto is not quite a year and I think he’s making very good progress. It looks like he will mature into a very good LGD once he learns a few “do’s” and “don’ts”.

3 thoughts on “Pluto the Pup becoming Pluto the Protector”