There is a little story about Divine Intervention involving our camera. After Death Hollow, Phil tried the camera and it still didn’t work. Next morning he gave it another attempt and lo and behold it snapped a photo. Our camera was back in business! The one day I really wanted photos but (unknowingly) had no time to take them was the day our camera was out of commission. If Phil and I had spent time taking all the photos we wanted of Death Hollow, we would never have made it as far as Bill and Adrian and we would never have known how to climb out of Death Hollow. We’d have been faced with the prospect of backtracking and spending yet another night on the trail with no food.

This is the first photo Phil took that morning after our camera miraculously “came to.” It’s a little fuzzy. The camera took a few tries before it remembered how to adjust to light conditions (and it was pretty dark down in that canyon), but it was working! This is the tree Phil and I commandeered from Bill and Adrian so we could hang up our wet things. 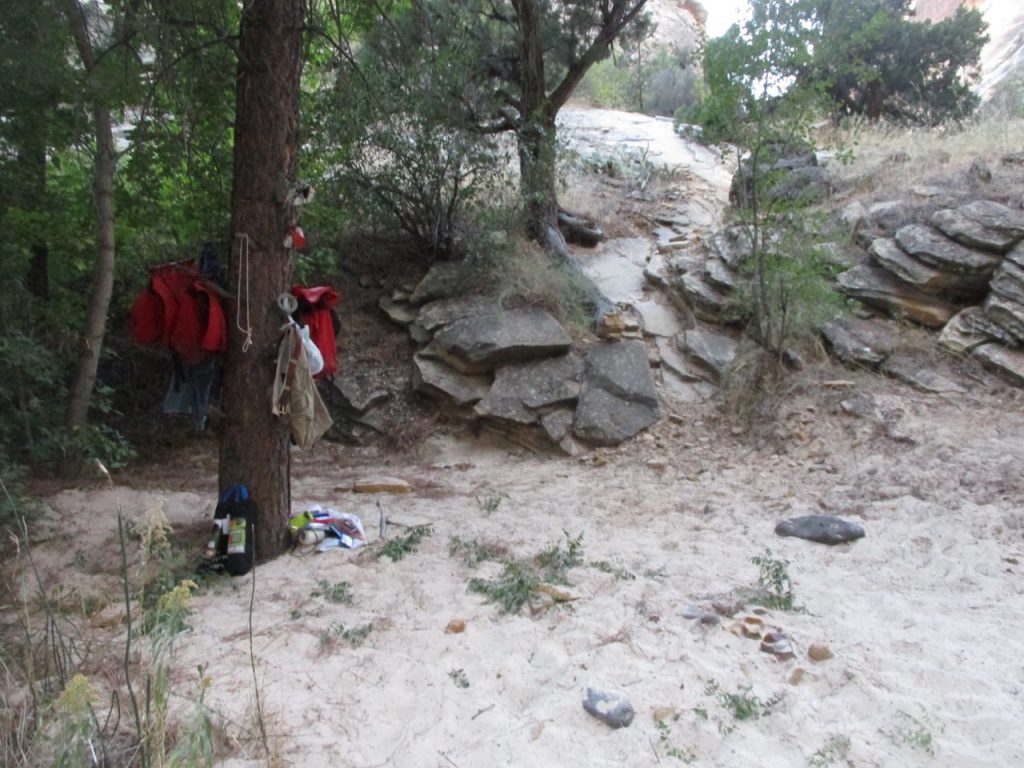 It was cold and dark in that deep canyon, but we could see sunlight touching the tops high above us. We were camped at the Boulder Mail Trail intersection and there were several large cairns at our camp and above us on the steep canyon wall to our left. It was a very obvious and well-marked intersection and trail, but without someone to tell us what it was, Phil and I would never have dared to leave our water source. Without a map we would not have known where that trail went, how far it went, or whether there was water on it. We were so thankful that we found Bill and Adrian to lead us out! There was no breakfast for Phil and I, but we still had the remains of our bottle of pancake syrup. Phil had the brilliant idea of using it as an energy drink. I divided the syrup into our two water bottles and mixed it with water filtered from the creek. It tasted pretty darn good and it was an excellent energy boost to start us off that morning. After we finished our syrup water, we topped off with some regular water and then filled our bottles to the top. It was going to be a very dry 8-mile hike over slickrock to Escalante. I tried to get the goats to drink but they weren’t interested.

Our goats were both tired, but Sputnik was also very sore. He’s “flatfooted” with very upright pasterns and the long hike over rock had taken its toll. We would be going over even more rock today. Nevertheless, both goats stood willingly to be saddled and followed us up the steep trail without complaint. There was only one spot near the beginning where Sputnik thought he couldn’t make it. It was a two-foot jump on the steepest section of trail. He went looking for a way around, but I knew there was none and had to go fetch him. He was too tired and sore to jump. I grabbed his halter and hauled his front end over the rock. The rest followed. Thank goodness that was the only trouble spot! The nice thing about a very steep climb is that you get to the top very quickly. The sun felt wonderful after the cold darkness of the canyon. And our camera was working! 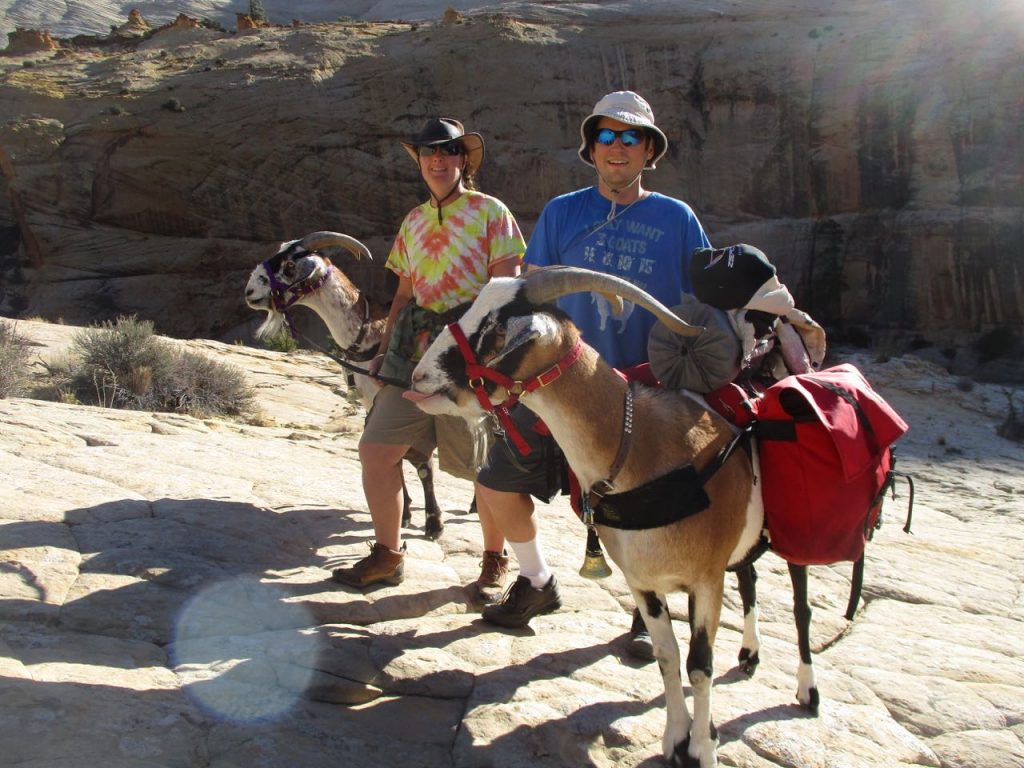 You can see the Death Hollow canyon winding away behind us. What a hike! It was so beautiful, but I was glad to be out of there. 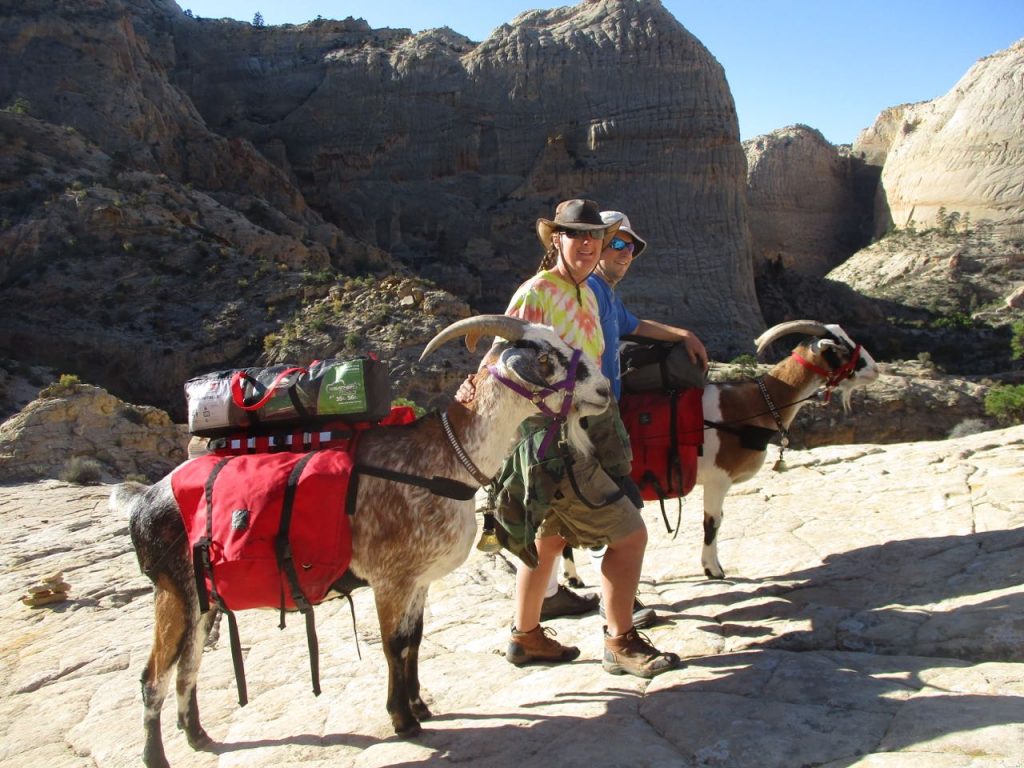 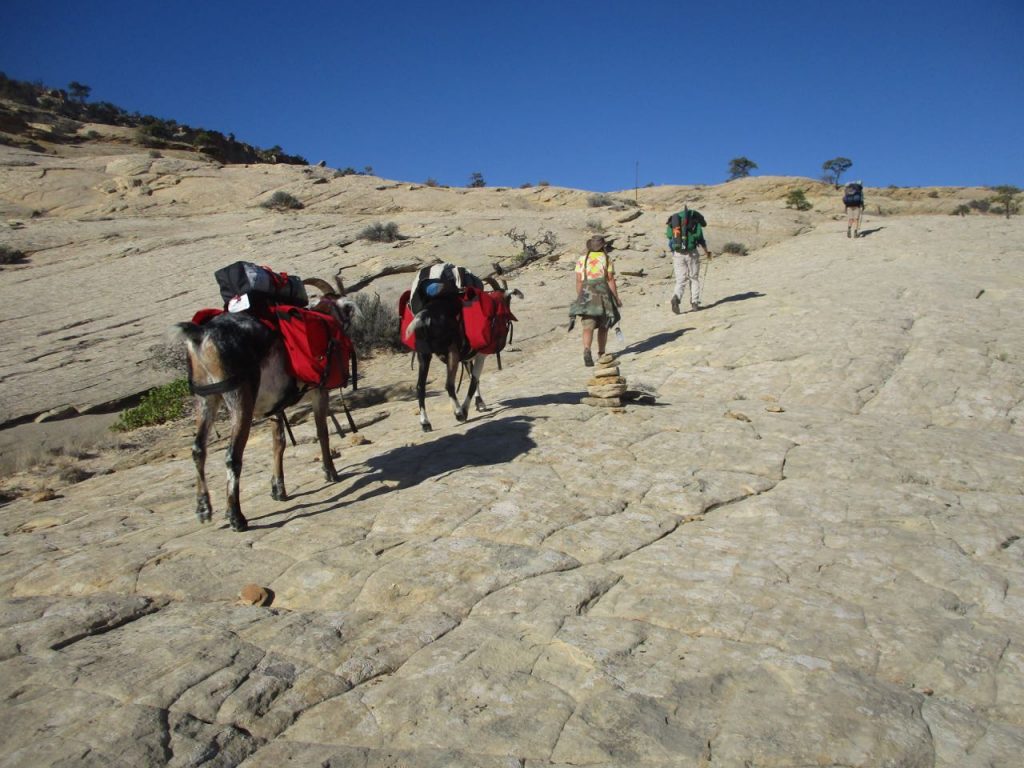 Nope, we’d have never found this trail on our own, nor dared to traverse it without knowing where it went and how far. There’s a lot of trackless wilderness in this area! 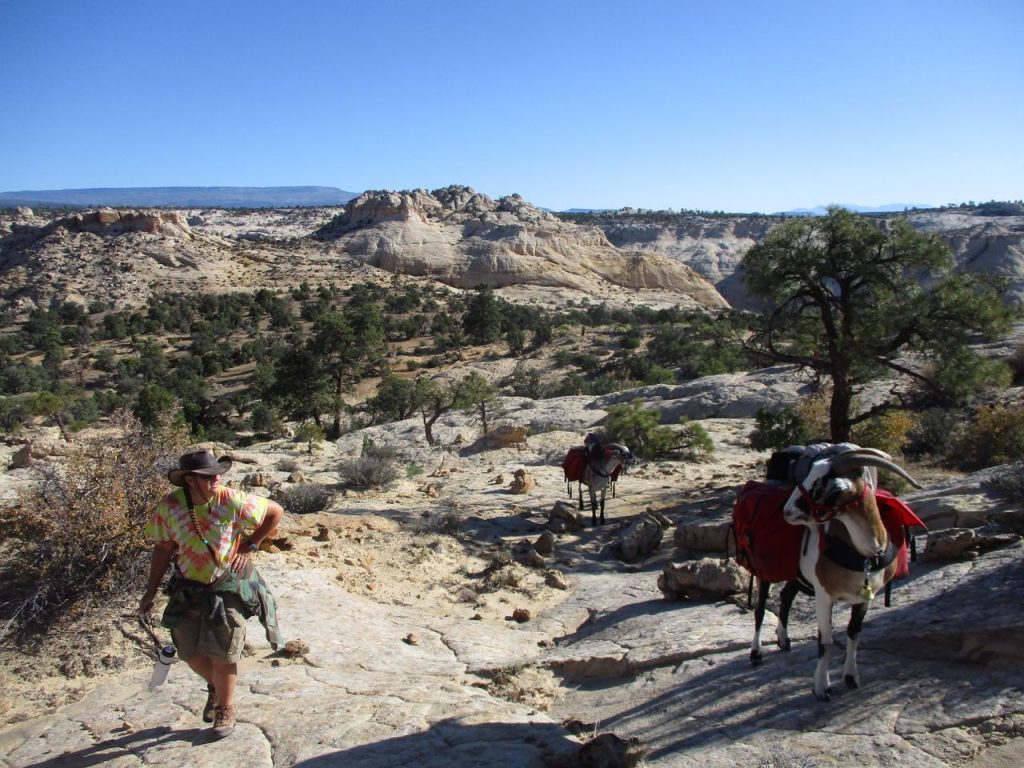 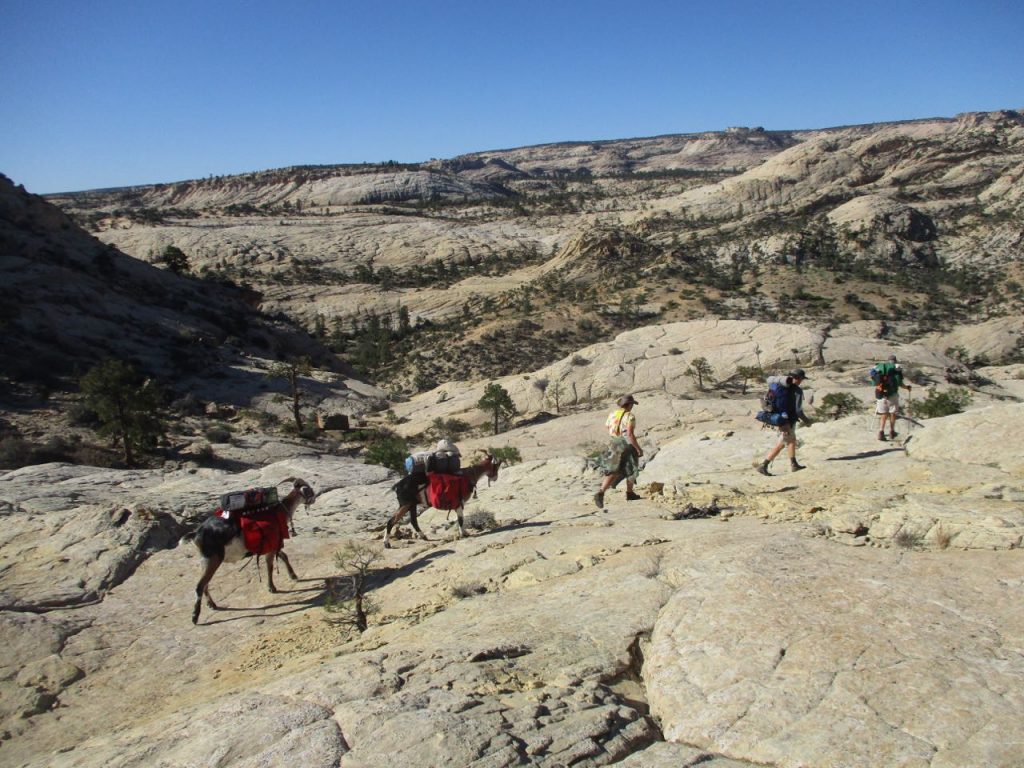 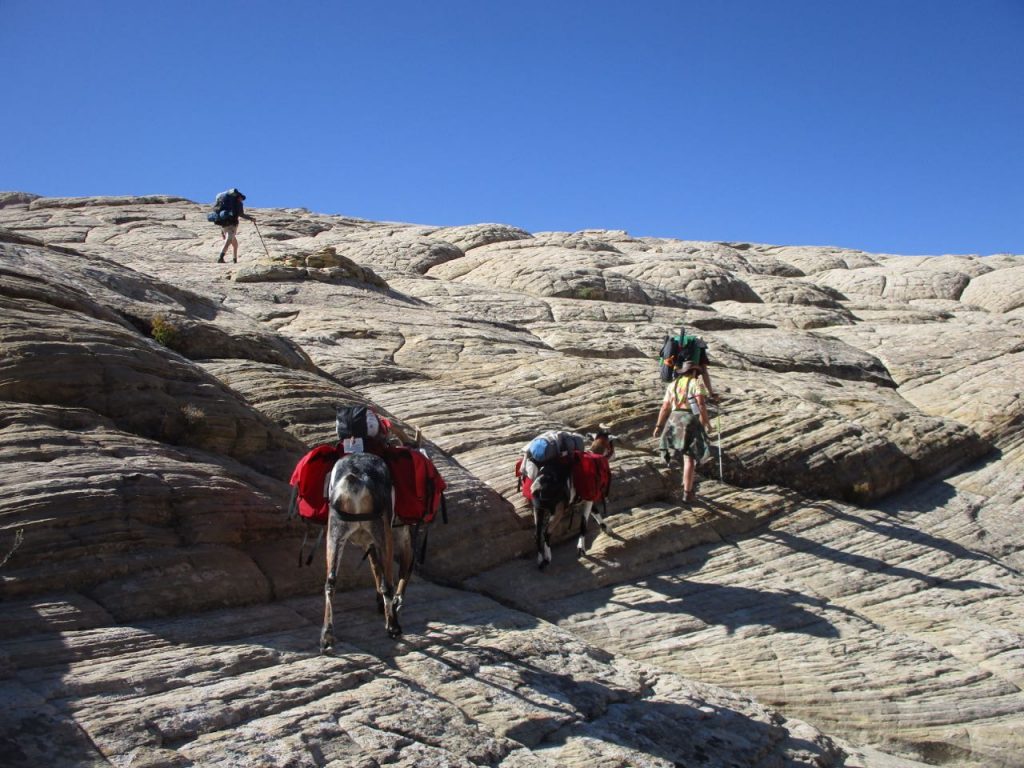 And here I am with our rescuers, Bill and Adrian. Once we were out of the canyon Bill was able to get service on his cell phone and we immediately made some calls. Phil and I were very concerned that Catherine might have called search and rescue. It would be a big, expensive, embarrassing ordeal and Phil and I would have our names in the paper–Idiot Tourists with Goats Lost in Death Hollow!

I didn’t have Catherine’s phone number with me, but Bill’s wife was waiting for him in Escalante and could relay a message. It turned out she was staying in the hotel right next door to our B & B. She walked over and told Catherine where we were, so that took a big load off our minds. 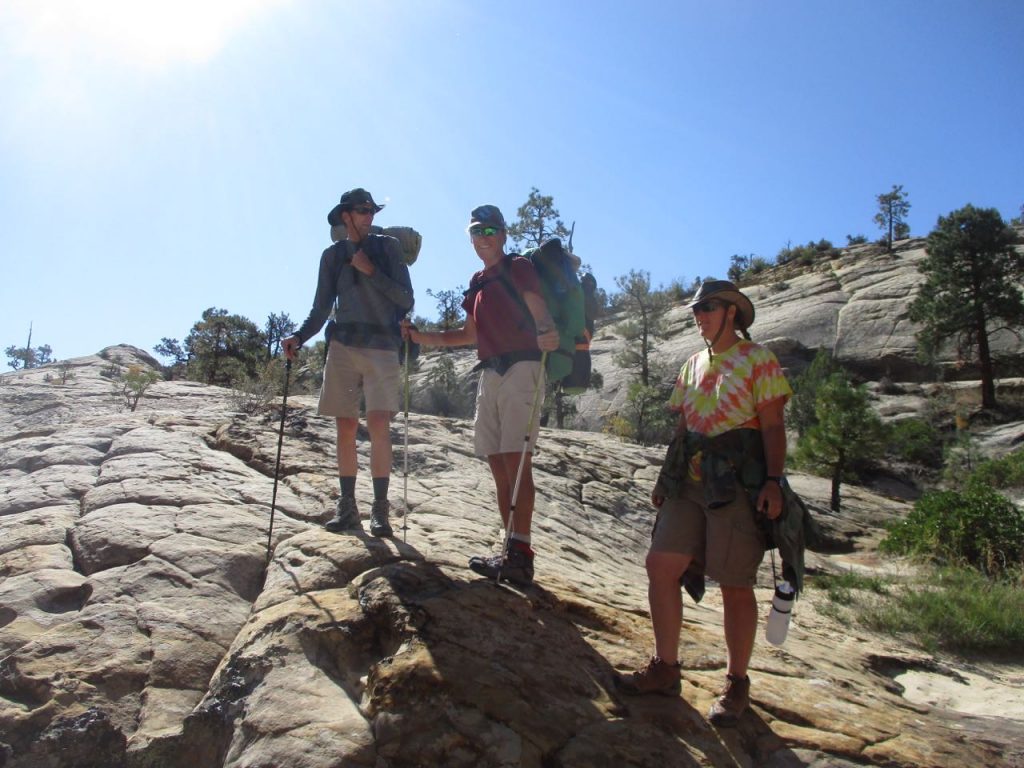 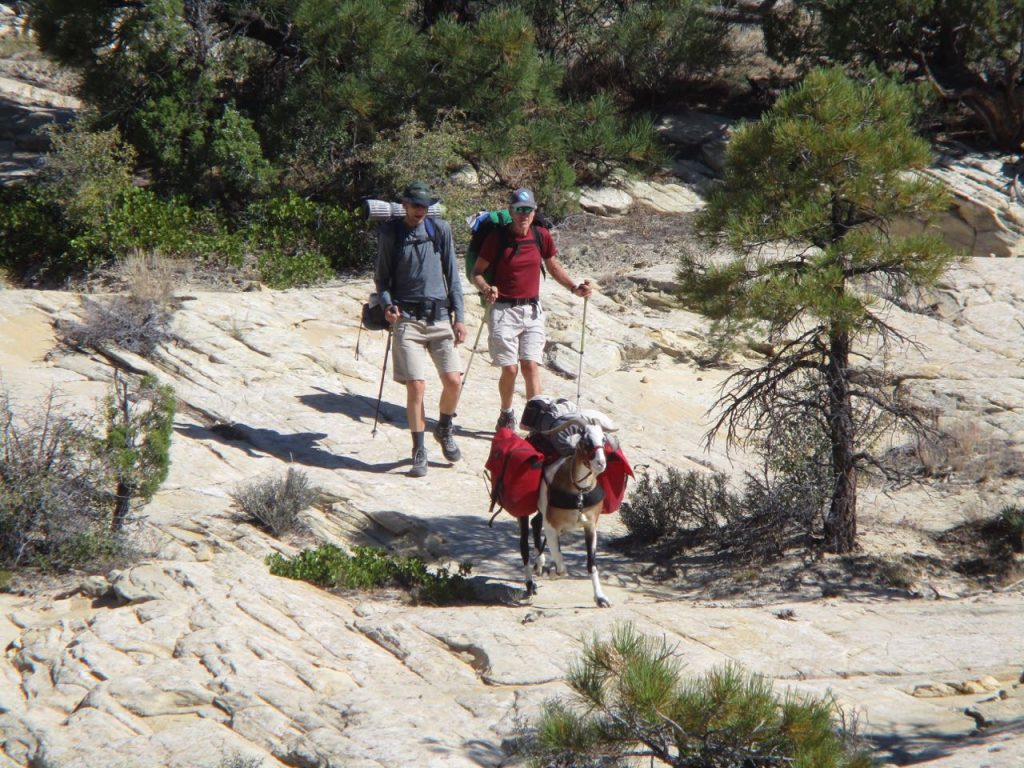 We found some shade and took a break. I think our camera was still not sure how to adjust for light because our shadow photos were coming out pretty dark. Hi Bill! 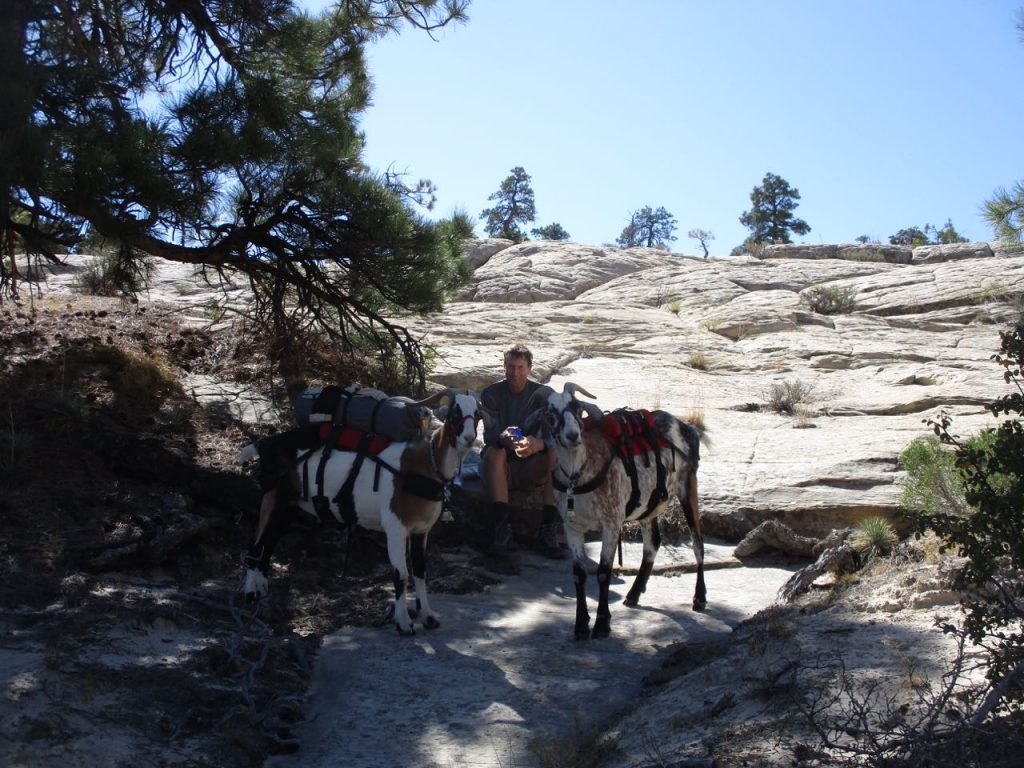 Adrian sat down and Finn stood on the rock right above him. I jumped up and shooed Finn away. Adrian was puzzled. I had to explain why it’s never a good idea to sit on a rock downhill from a goat. It’s bad enough when the black pebbles start rolling past and lodging under your seat, but no one wants to suddenly find themselves sitting in a yellow river. Thankfully Finn was too tired to walk back and forth above us and preferred to lay down. 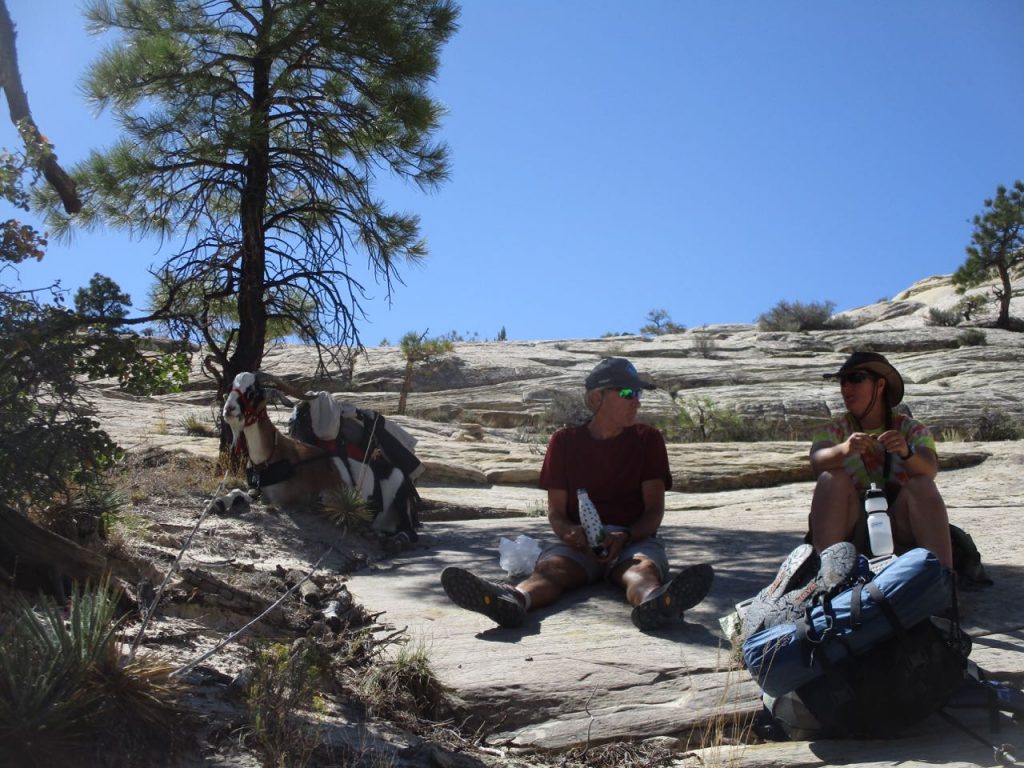 Several miles into our trail, Finn, who was walking behind me, suddenly bolted past on my left. I turned to see if something was chasing him but he wasn’t running from anything. He was running toward something with an eager gleam in his eye. I followed him over the ridge and there was a large pothole full of water! Finn had smelled it and made a beeline. He was obviously very thirsty, but he had a hard time finding the best approach. I went down and helped him. The water was dark brown and rancid so Finn didn’t drink much, but he took enough to get by. Sputnik got a little too. 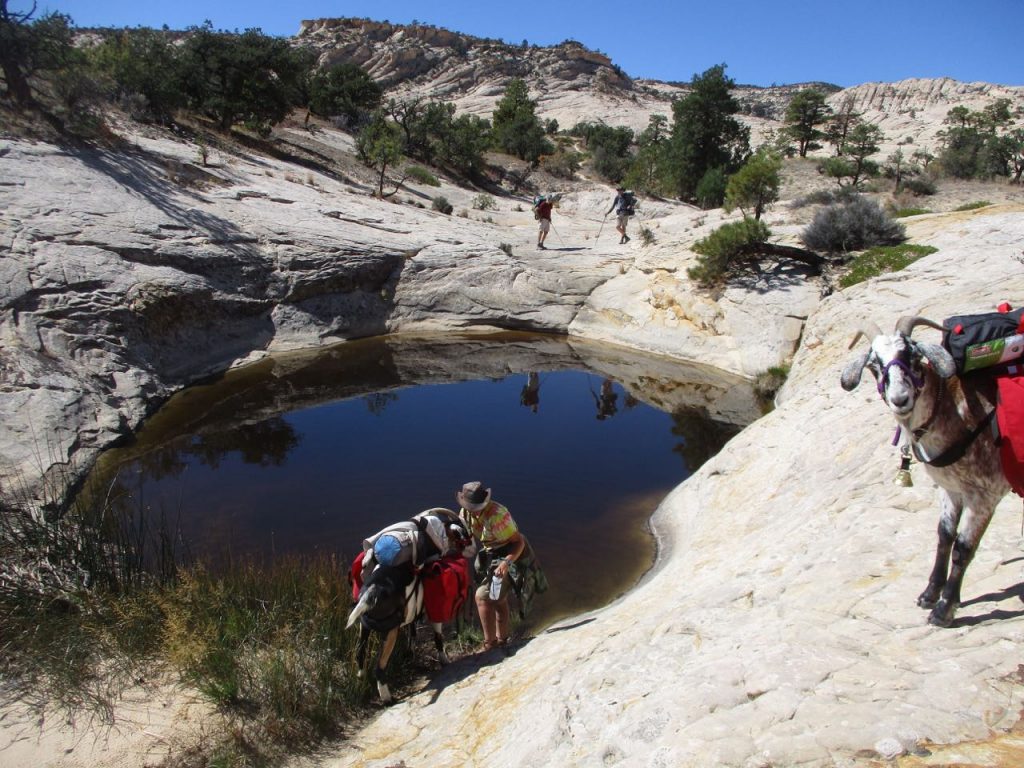 Bill and Adrian waited for us on the other side. 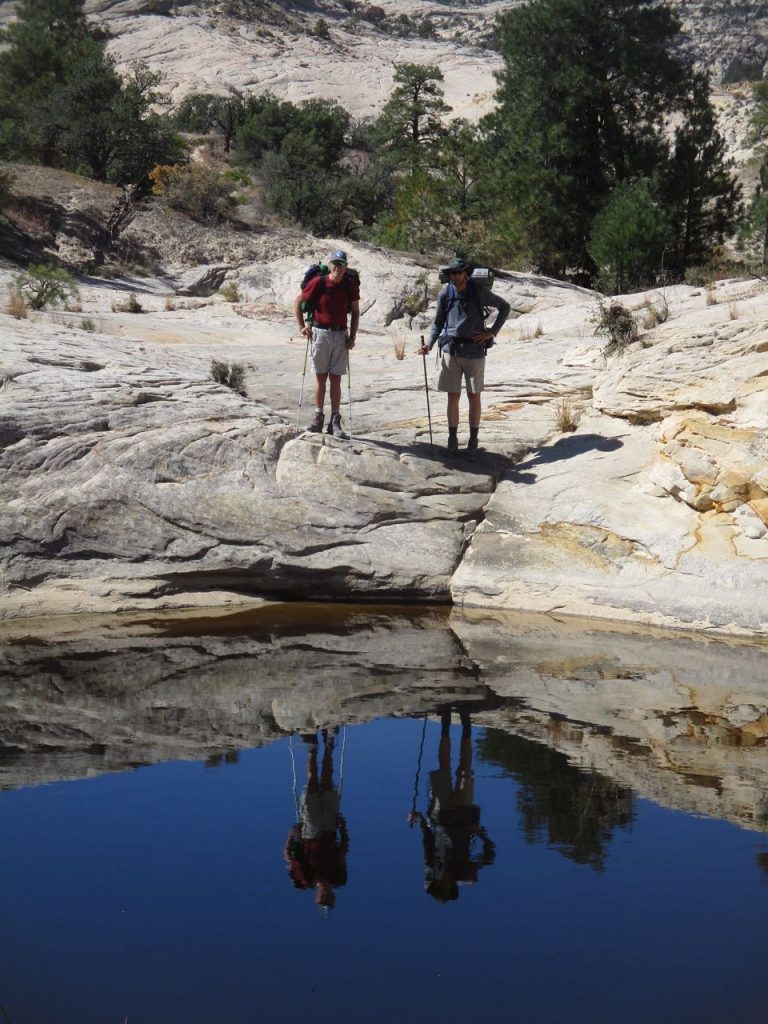 There were a lot of neat rocks along our route. Phil always loves the diving boards. 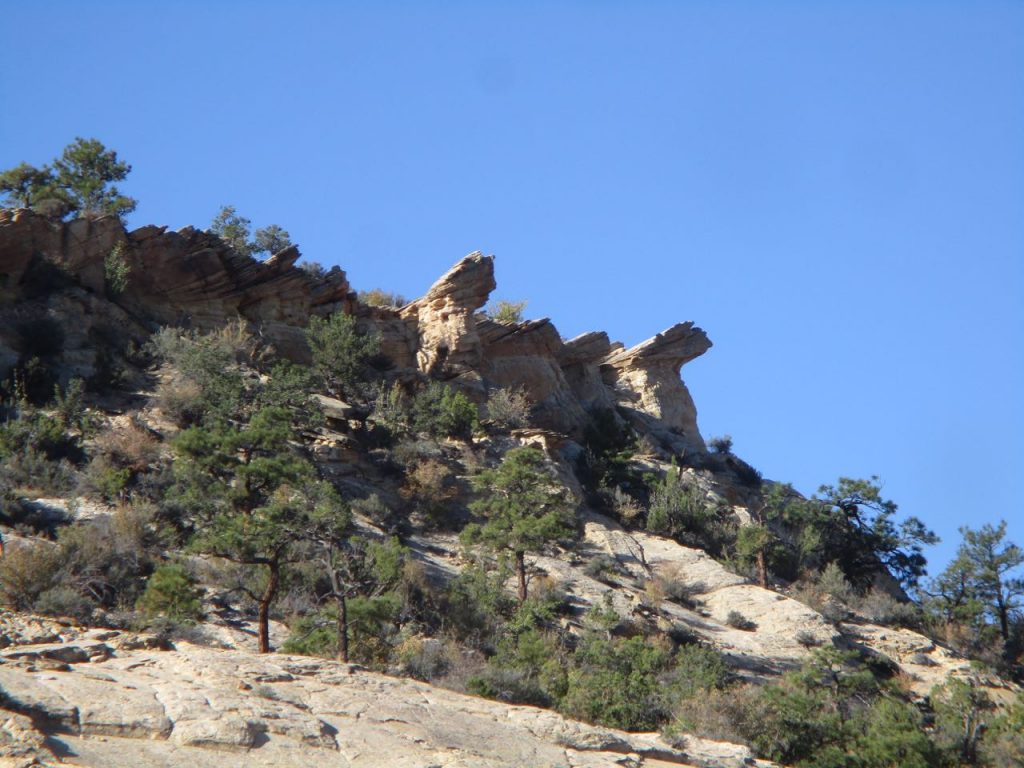 A few imposing hoodoos frowned on us from far above, but they were in shadow. 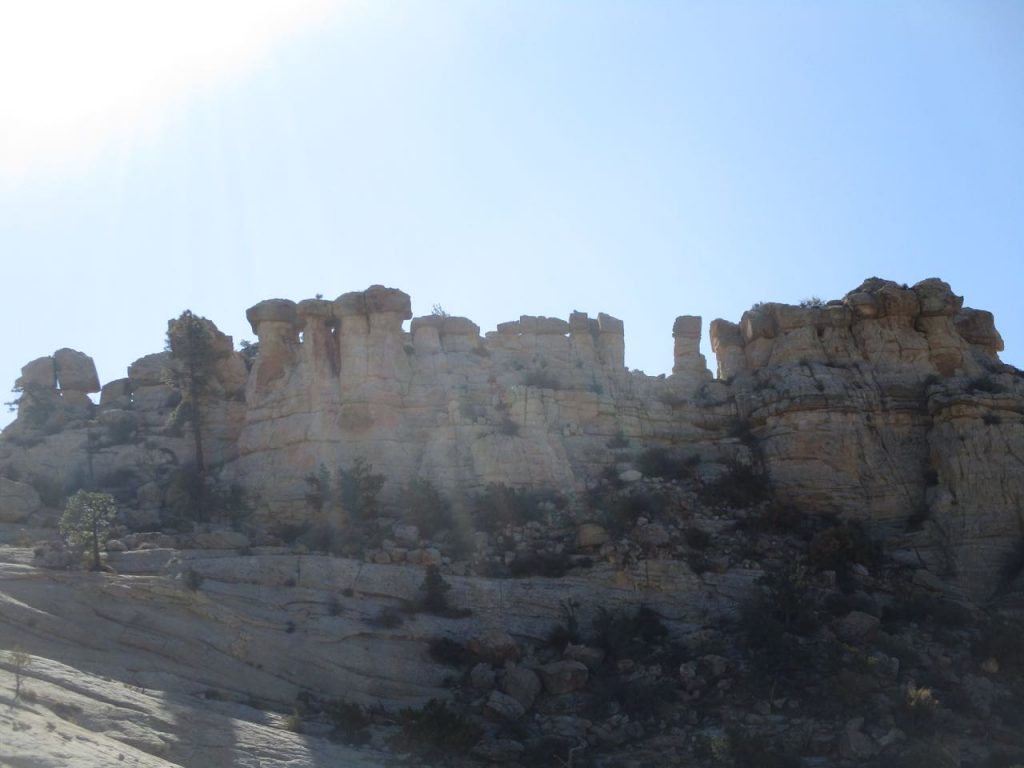 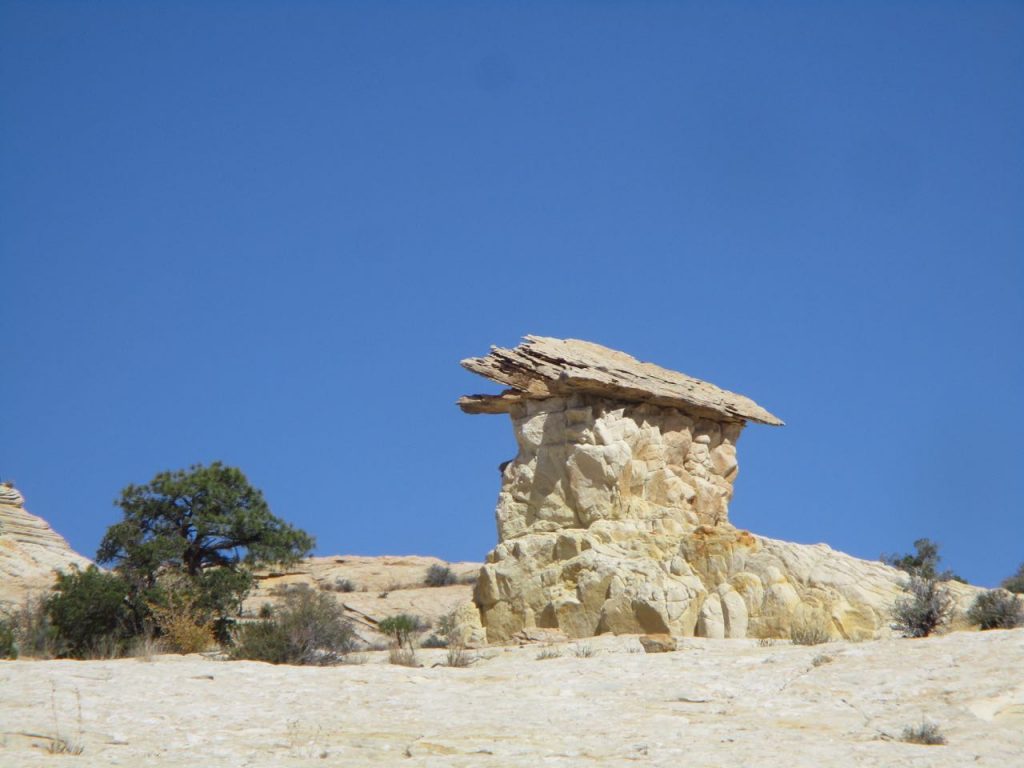 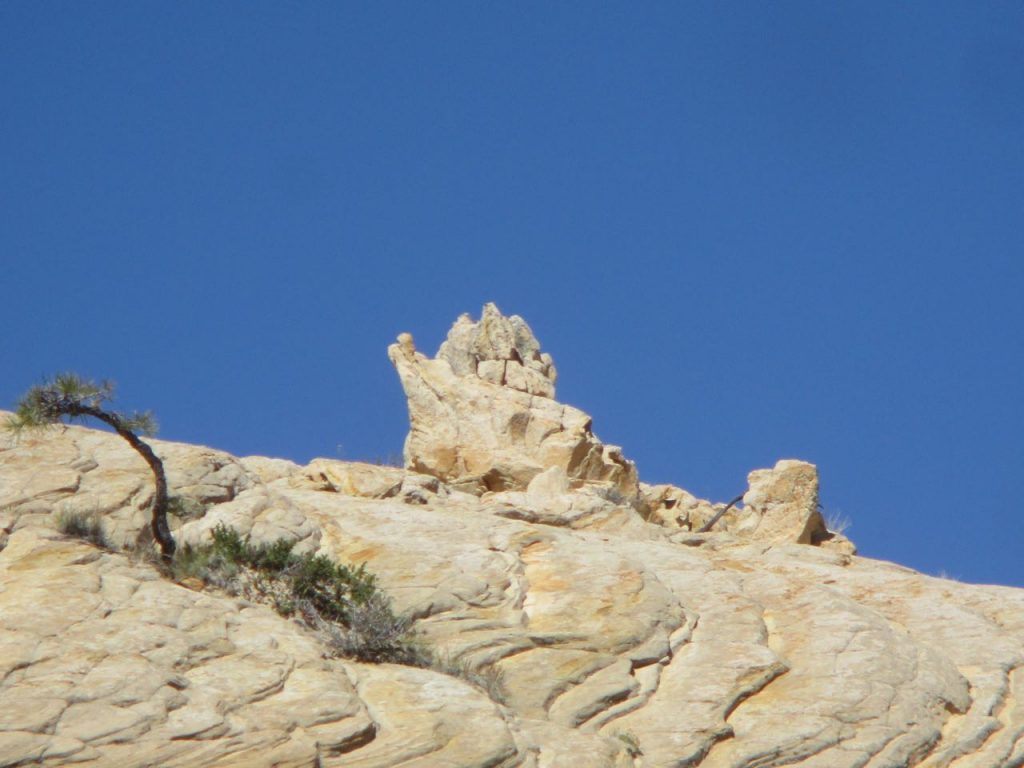 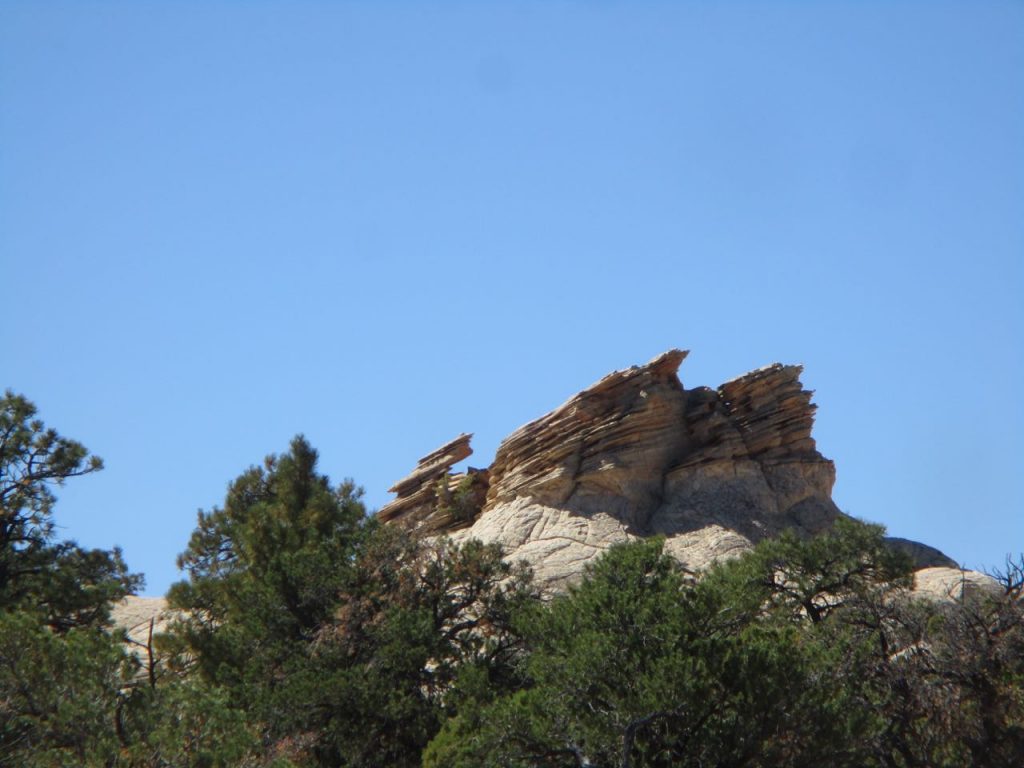 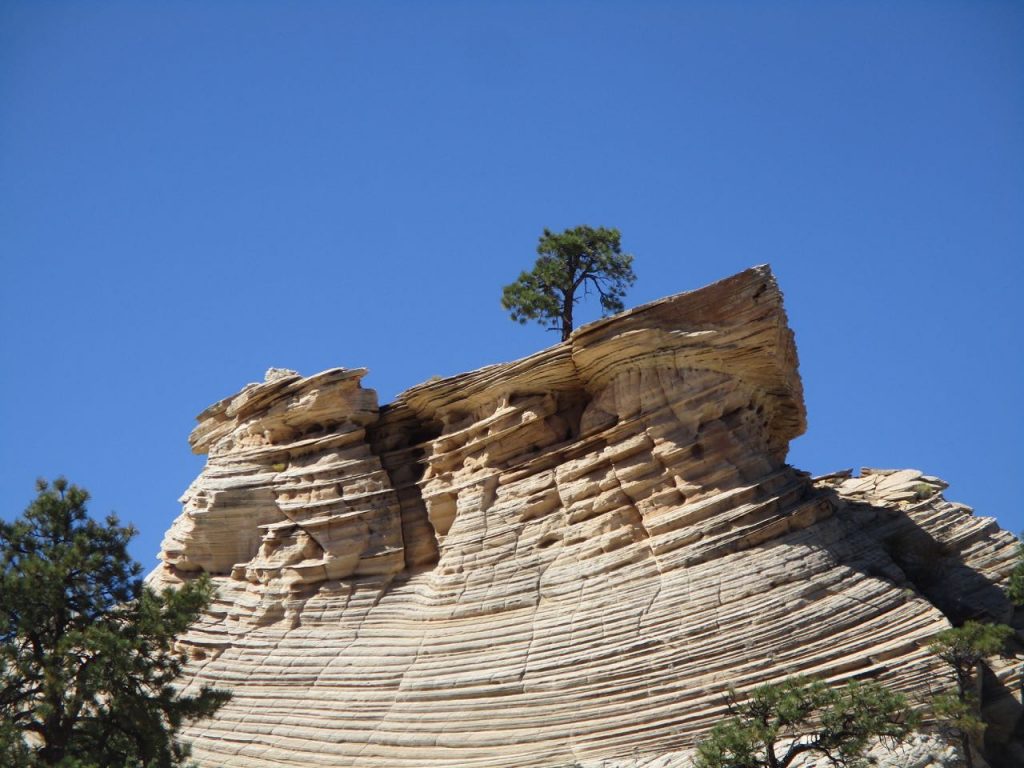 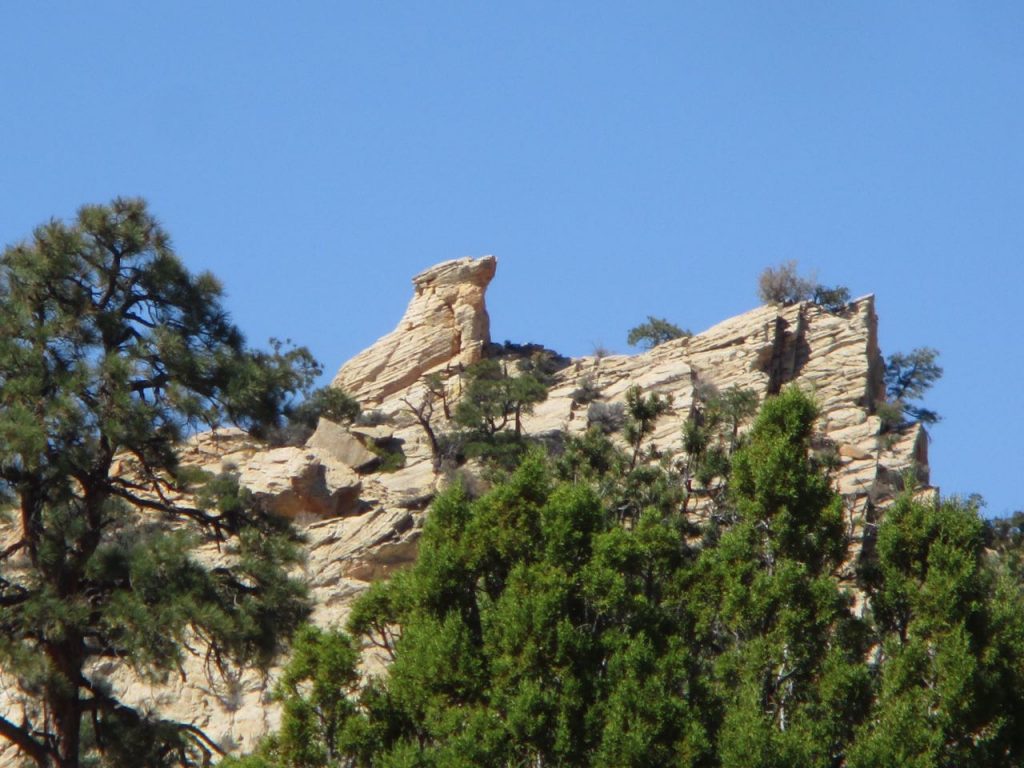 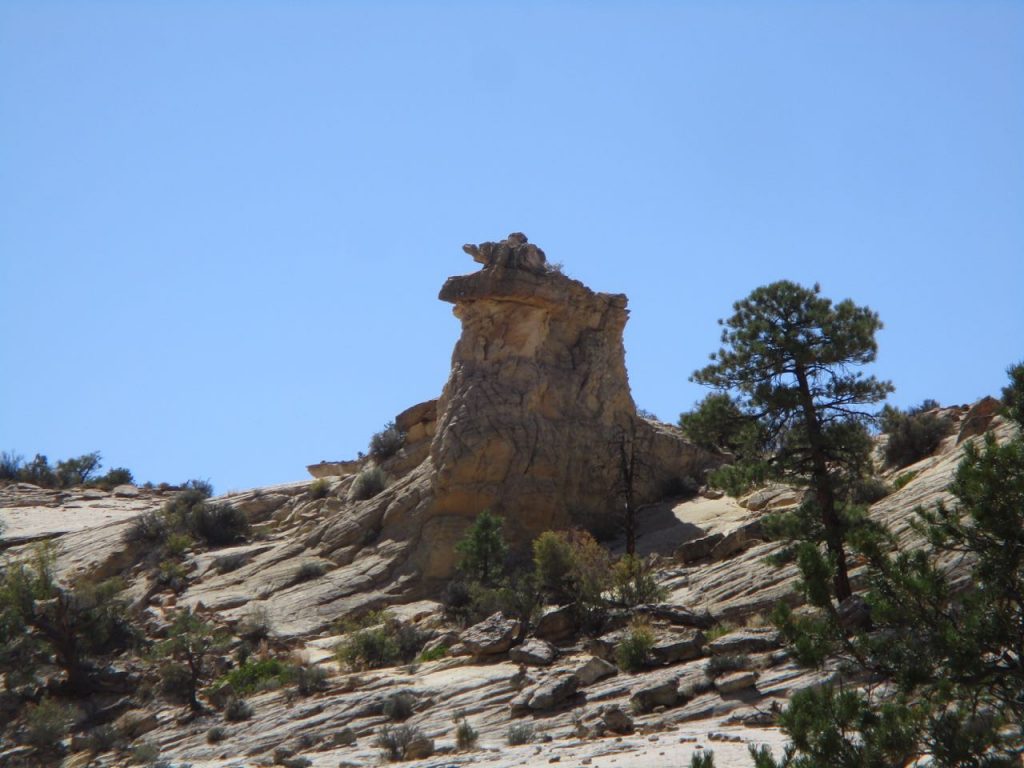 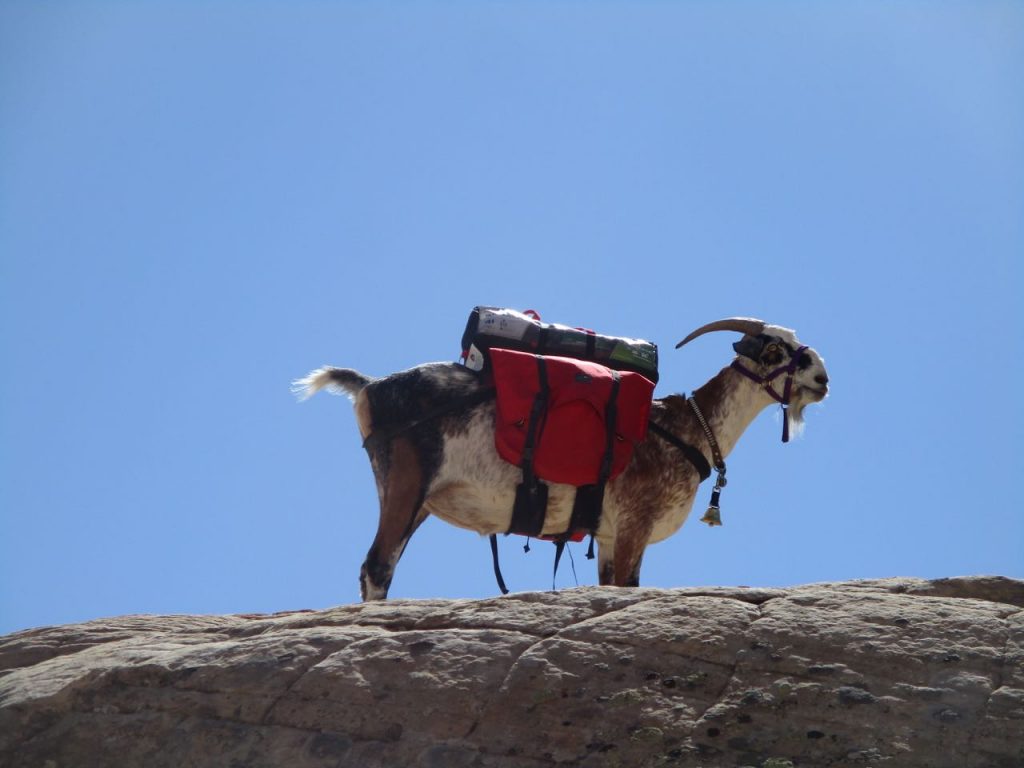 Was this ever a welcome sight! 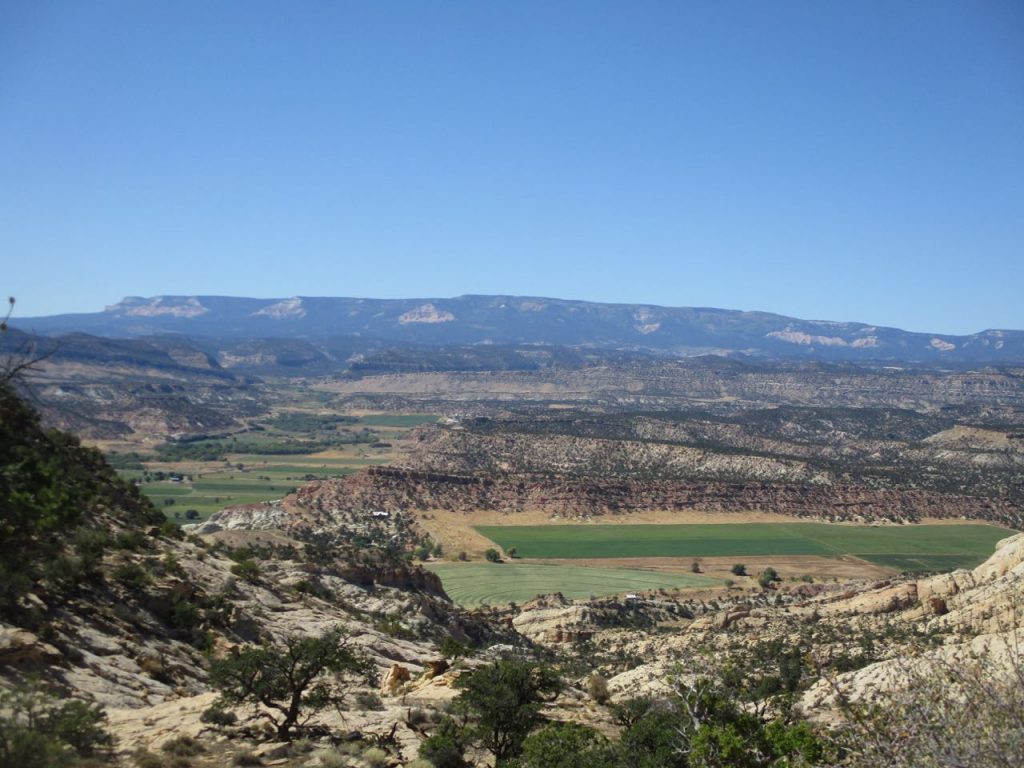 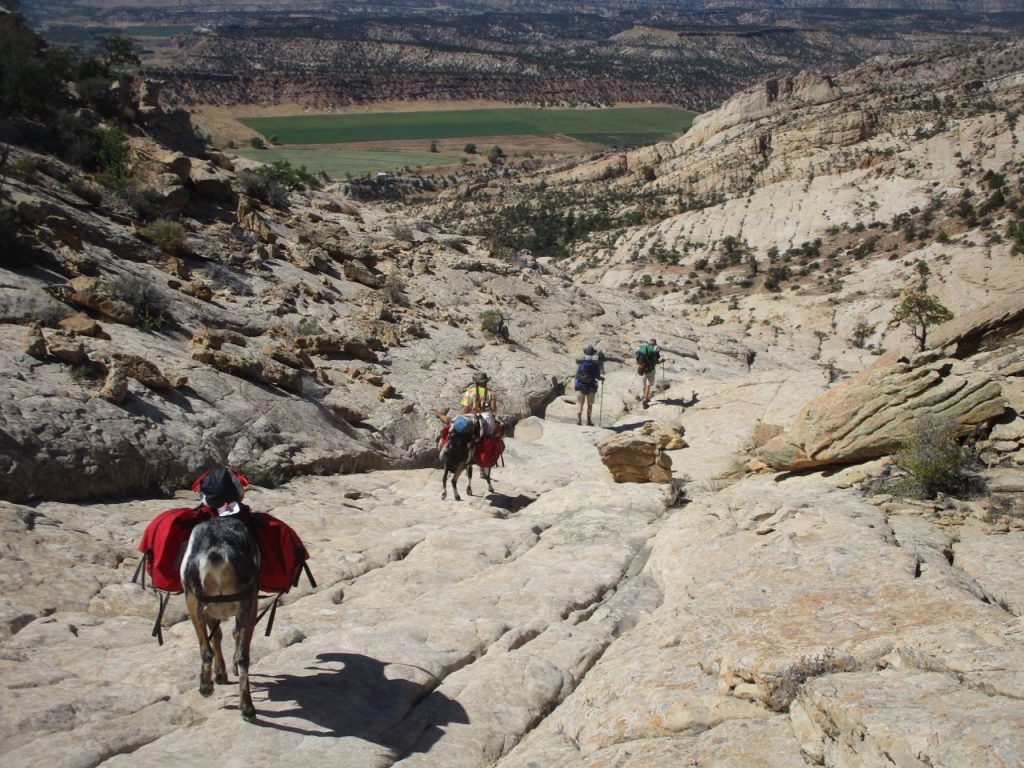 We took a long break overlooking the Escalante valley. Despite the sunshine, it was actually pretty chilly. The breeze had kept us cool on the long uphill climb, but now that we were headed downhill it was cold on our sweaty t-shirts. I put my coat on. 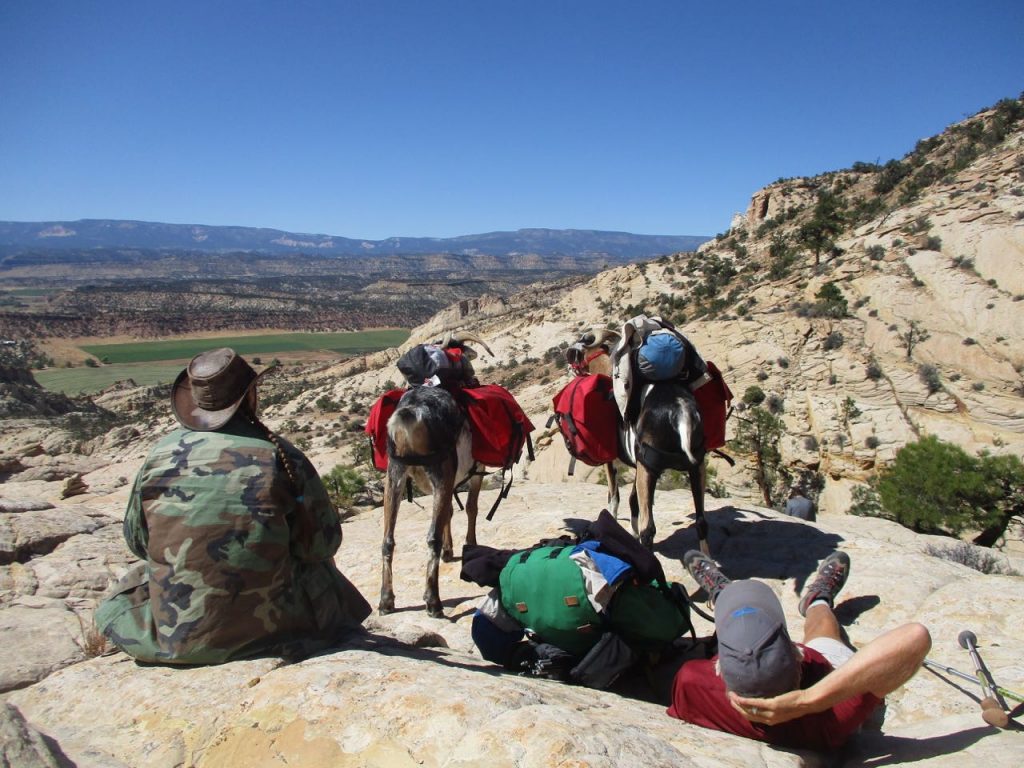 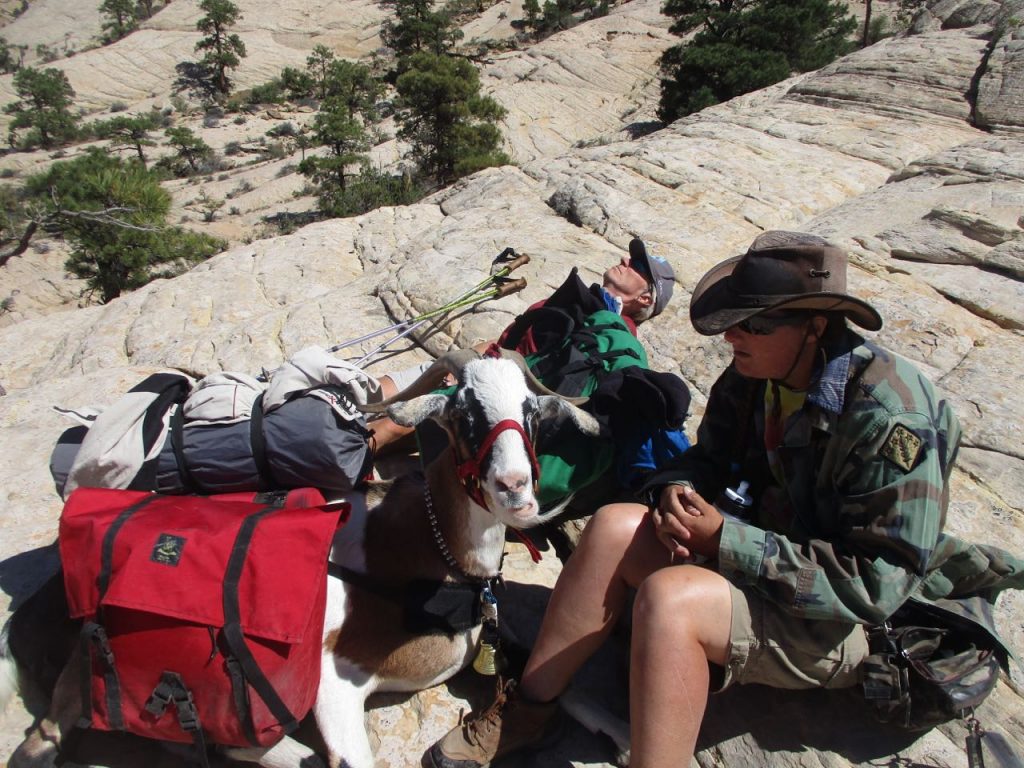 Poor Sputnik. His feet were sore before we even started, and going downhill was worse than going up. The tent on his pack kept swinging side to side no matter how tight I secured it. Sputnik’s “rhumba” style of walking was exaggerated by his soreness and even more when he went downhill. The tent slung back and forth and a few times it actually pulled his pack completely to the side. Sputnik never complained. When his pack flipped under his belly he would stop and wait for someone to come fix it, so I had to look over my shoulder a lot to make sure he was still following. In hindsight I probably should have unloaded that tent and carried it down myself. 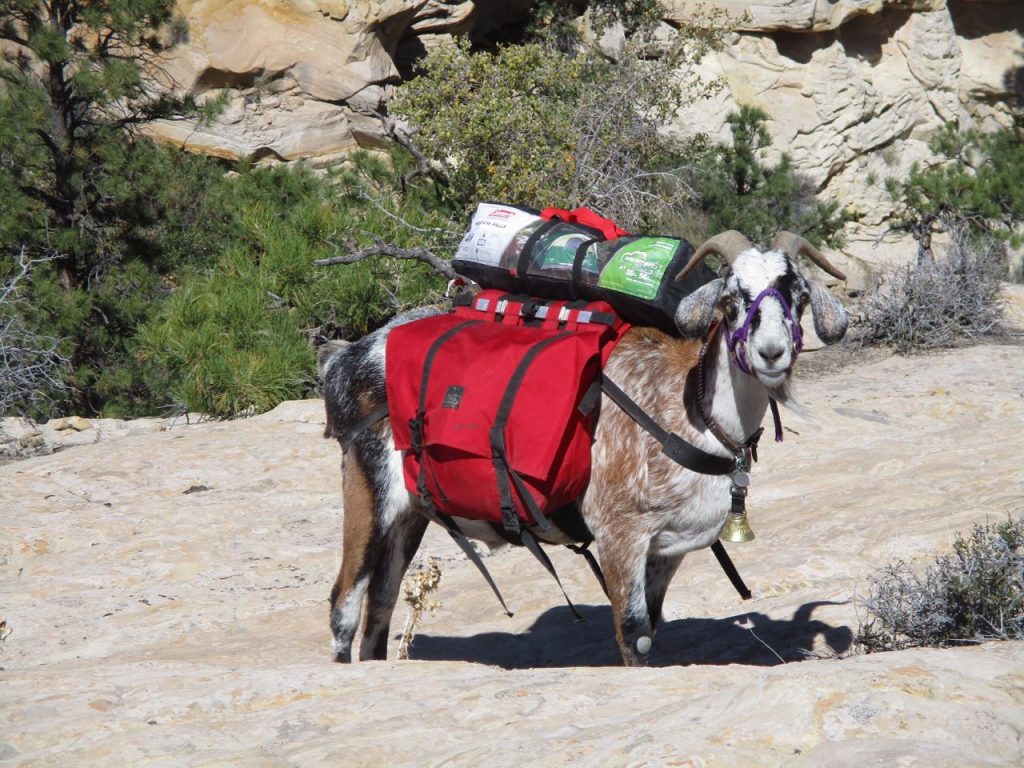 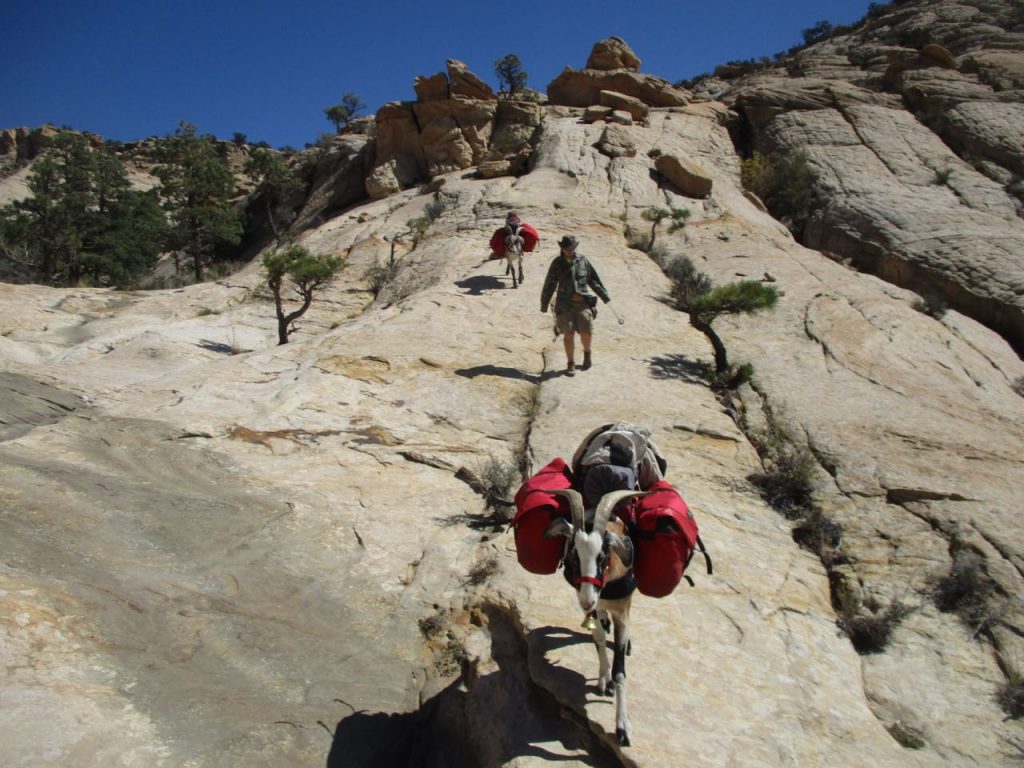 Uphill again? Seriously?? The Escalante valley looked tantalizingly close but looks are deceiving. I thought it would all be downhill once the valley opened up, but we had another steep climb or two in store. 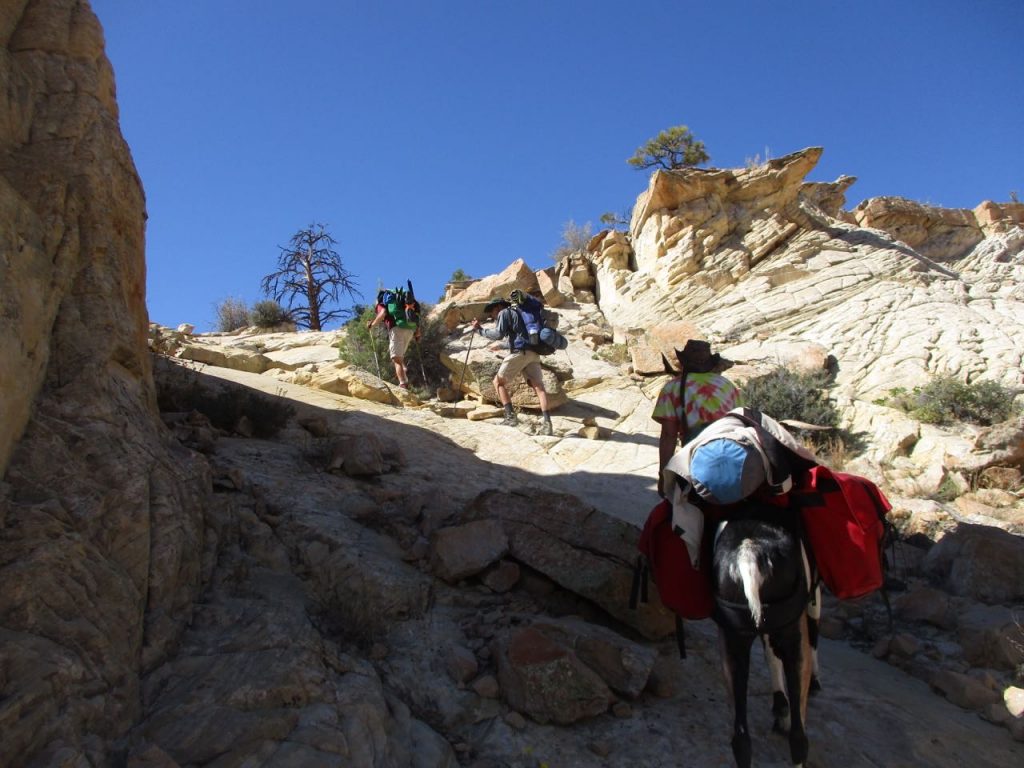 We got to the bottom and our hitherto well-marked trail petered out in dense brush. Flash flooding in the creek bottoms that summer had obliterated the sandy portions of the trail near Escalante, and a lot of weeds and bushes sprang up from the moisture. We ended up bushwhacking our way to someone’s driveway and walking out to the road via private property. Not the best way to do things, but we were in no mood to get lost this close to town.

We got to the road and Bill called his wife to come pick him and Adrian up. We said our goodbyes and Phil and I headed back to our B & B. For some reason that last mile on the road was the worst part for Sputnik. He was tired and his feet were very sore. We went slow and I let him stop frequently to eat the alfalfa plants that grew abundantly along the roadway. As soon as we got back, the goats went straight into their trailer where I bedded them down deep with fresh straw, stuffed their hay bags, and gave them plenty of clean water. They got their drinks and plopped down to sleep. Phil and I stowed our gear and went straight to dinner where we split a whole rack of ribs and two orders of fries. It was nice to eat again!