Delilah puttered around all day not getting the job done, and just as it was beginning to get dark she finally settled down to business. She held out as long as possible until she thought Phil and I would surely not check on her again. She doesn’t like anyone to attend her births. But it’s a good thing I can keep an eye on her in the Goatoscope because she needed help with these.

Poor Delilah came down with mastitis Sunday night. She had a fever and her udder was hot and lumpy with no milk in it. I started antibiotics right away and by Tuesday she was mostly recovered, but I know fighting sickness took a toll on her energy levels. Her contractions were weak and far apart. I could see hooves just inside, but every time she laid down and started to push, she’d jump right back up and stop pushing for a long time. At the rate she was going we would be there all night. After probably half an hour I finally grabbed hold of one of those toes and started to pull. Delilah didn’t help much and I had to pull pretty hard to get the first kid out. The baby’s nose was halfway out for what seemed like ages but I could see the little purple tongue twitching so I knew the kid was ok despite her delayed entry.

And she was worth waiting for! We got a chamoisee doe with an all-white face and cute little pink nose. She has a classic white splash on the left but the right side has spots more reminiscent of her Nubian father. 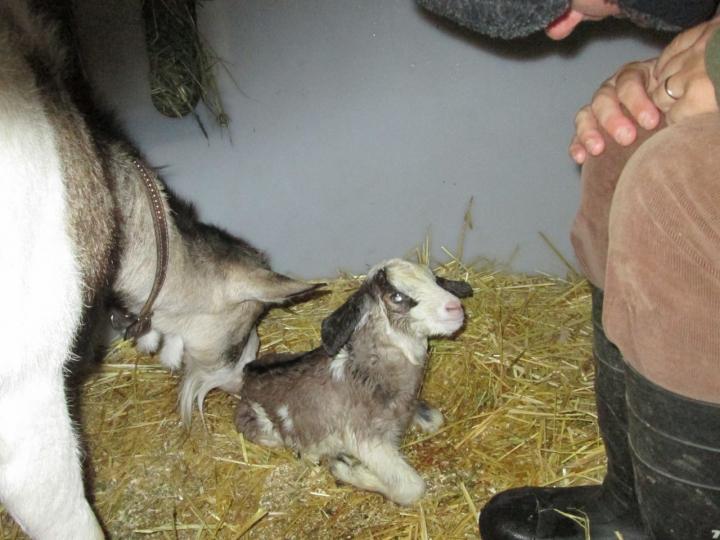 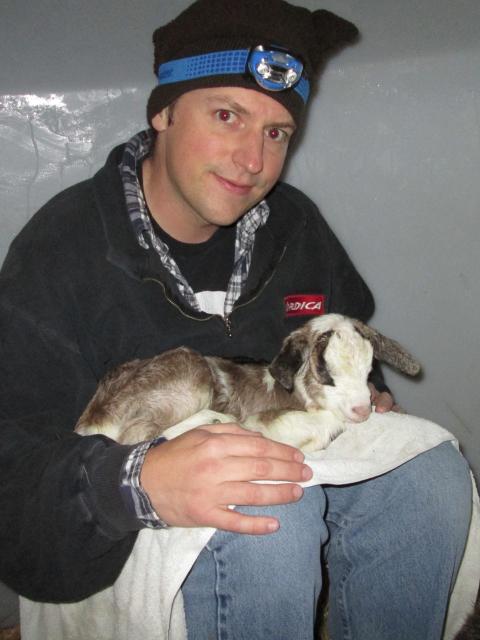 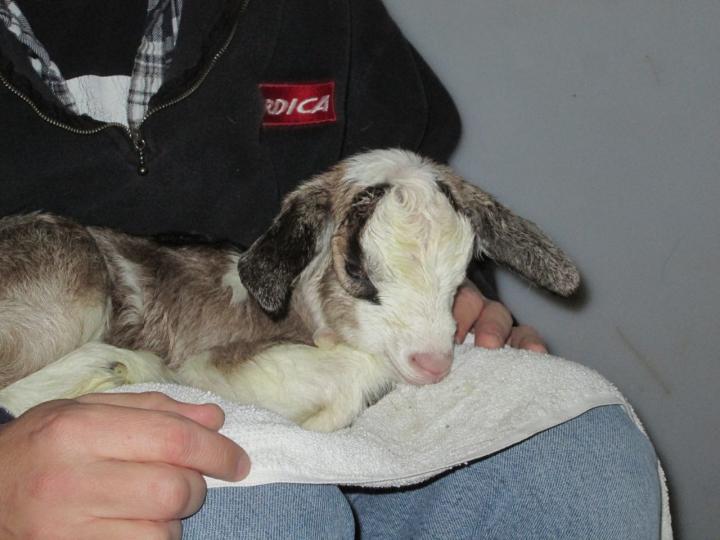 And best of all, she has wattles!!! 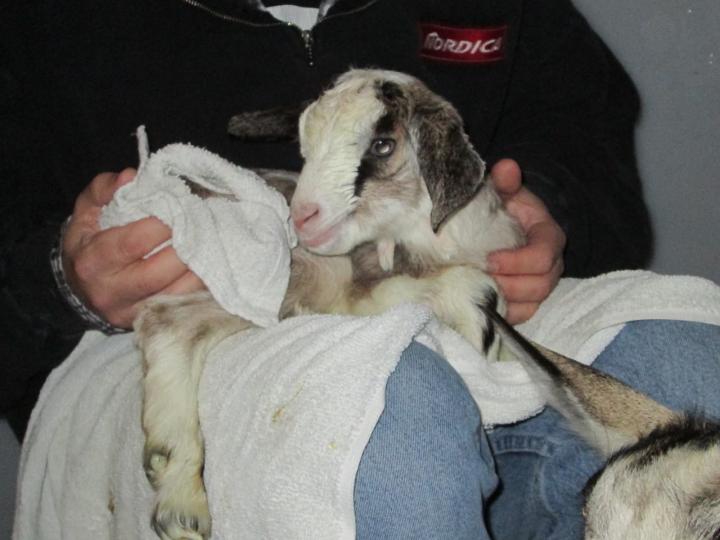 Mama was delighted with the little one and seemed content to stop there. But when I bounced her belly I could feel a hard little Something still lurking in the depths. Delilah started to lay down and push a few times, but her efforts were totally feeble and nothing was presenting at all. The first kid had been on the ground about an hour when I finally took off my coat (ugh, it was cold!), rolled up my sleeves, disinfected, and went fishing. 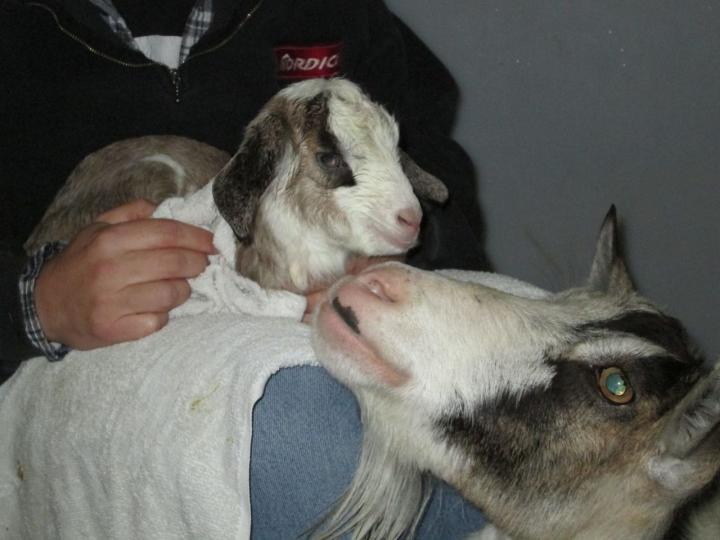 The kid was still completely in the womb with nothing coming to the birth canal. Apparently Delilah was perfectly happy for him to stay right where he was. He was presented correctly with one leg forward and one back. His head was in the right spot. I felt his teeth to make sure he wasn’t upside down or anything weird like that. The fact that he was still so far down in the depths had me worried that he was in a bad position. But he was fine. Mama just didn’t have the energy to push him out, so I had to pull. Once again, Delilah barely helped at all and this kid was bigger than the first. But I soon had him out and he was fine and strong. 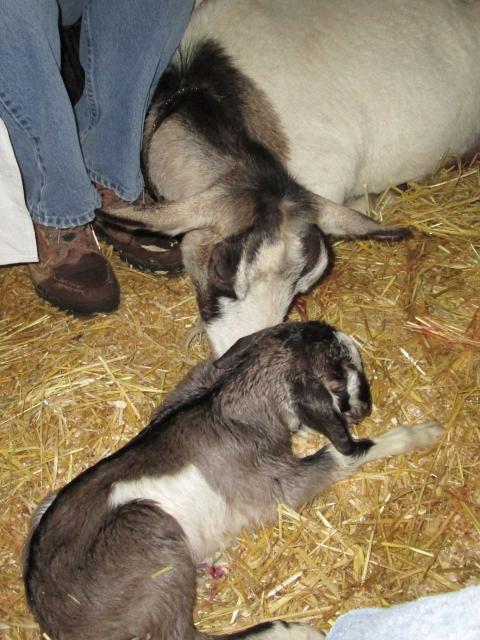 Once he was out, Delilah was happy to see him. She licked him off and then took a brief nap. I gave her some Nutri-Drench to help chirk her up and it helped a lot. Then I had the lovely task of cleaning out the wet, soiled bedding in the dark and cold. But at least it had stopped raining. 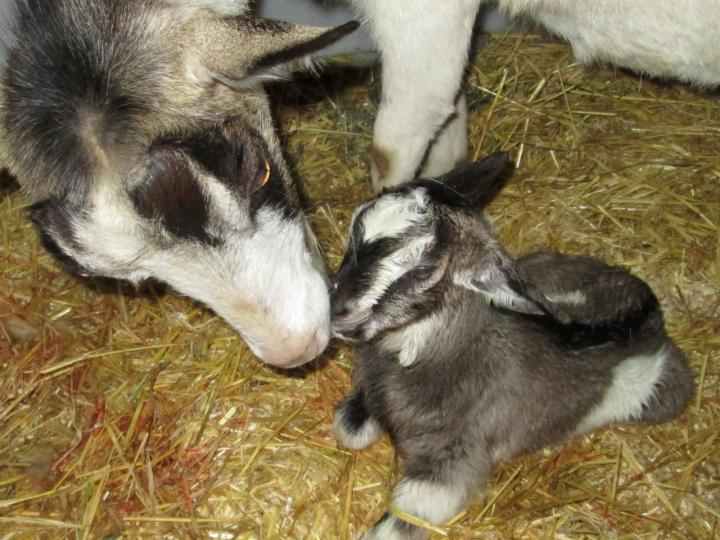 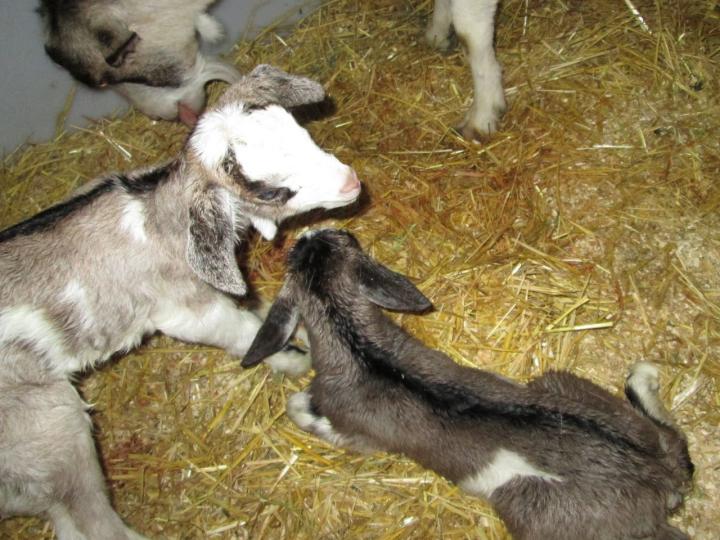 2 thoughts on “It was a dark and stormy night…”