Every year our community has a big day-before-Easter party with an appearance by the Easter Bunny, an Easter egg hunt, and other games for the kids. When the weather is nice Phil and I try to bring a goat or two and the cart down so the kids can ride. Last time we did it was in 2015 (we got snowed out last year), and Pac-Man was our cart goat of honor. This year it was Sputnik!

His yellow and white horn wraps with the purple halter looked appropriately festive for the season. We’ve always had trouble figuring out what to do with the reins on these occasions. The kids love being able to hold them, but of course I can’t have them pulling my goat’s head around. I’ve always hooked them to the neck strap instead of the halter, but the kids can still slap them up and down on the goat’s back. My other goats never really noticed this so I’ve not worried about it too much unless the kids were slapping too hard or too often. But Sputnik is very sensitive to rein slaps and I want to keep him that way. So I fastened the reins to the top rail with a clove hitch and it was perfect! Most of the kids still didn’t realize the reins were only decorative. This also kept the reins off the ground. Usually the kids drop them in the dirt when they get out and I’m constantly having to go back and pick them up. Not this time! 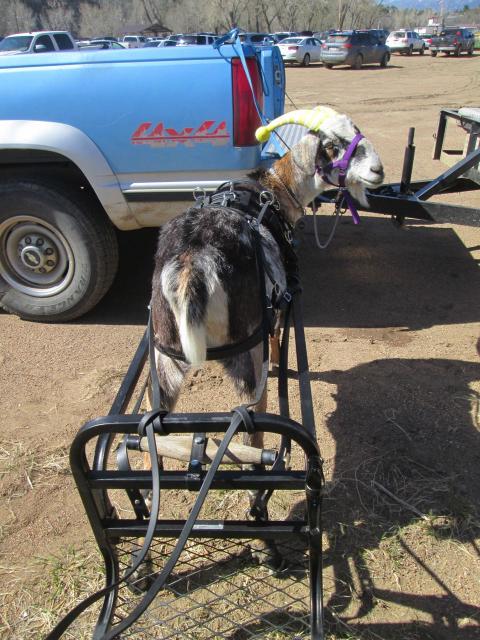 Sputnik was awesome at the job. It walked him once or twice around the area to make sure he was calm and he only jumped once and balked twice before he got in the groove. He was a little hesitant about leaving Finn at first, but he soon realized that he was ok without his buddy. 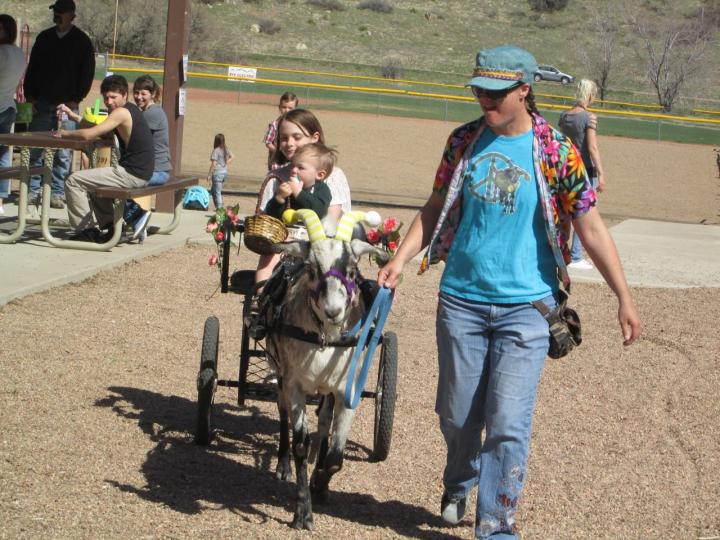 I love the flowers on the back of the cart. 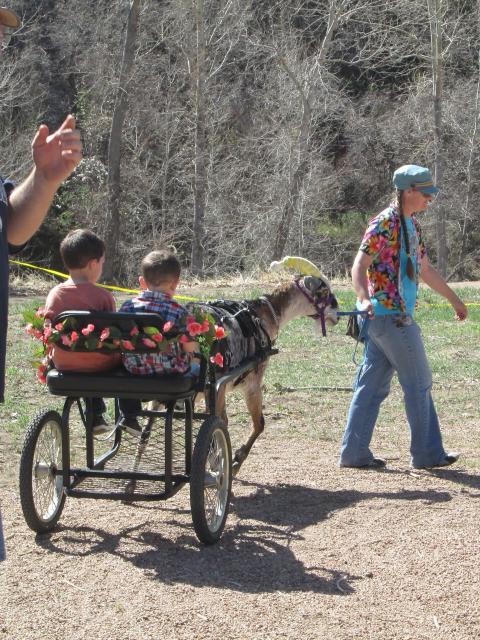 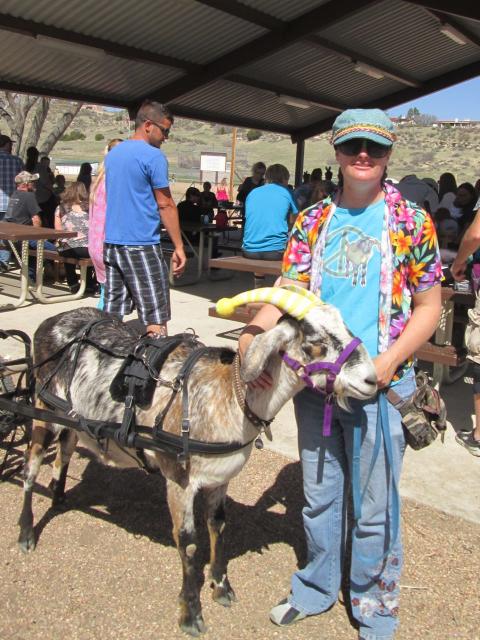 Phil brought Finn down so the kids would have a goat to pet. It’s always been a little difficult doing these things with just one goat because half the kids want to ride and the other half want to pet so it can get very crowded around the goat and difficult to start off safely. So Finn got to be our “meet and greet” front man while Sputnik did the grunt work. 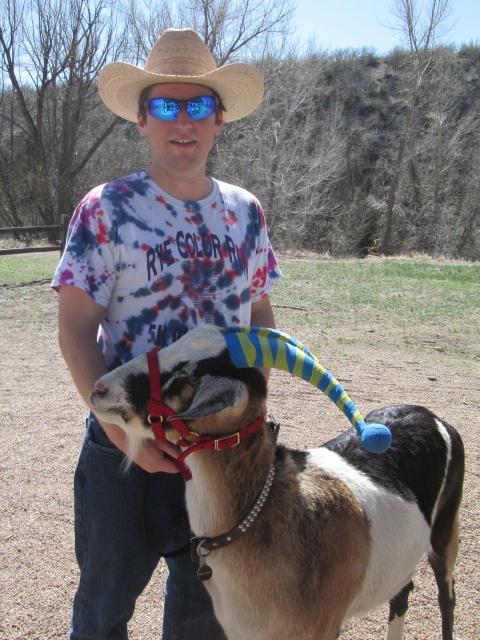 After the event I took the boys into the field for some nice close-ups while their festive horn wraps were still in place. Both boys’ personalities have matured and their training is starting to feel really solid. 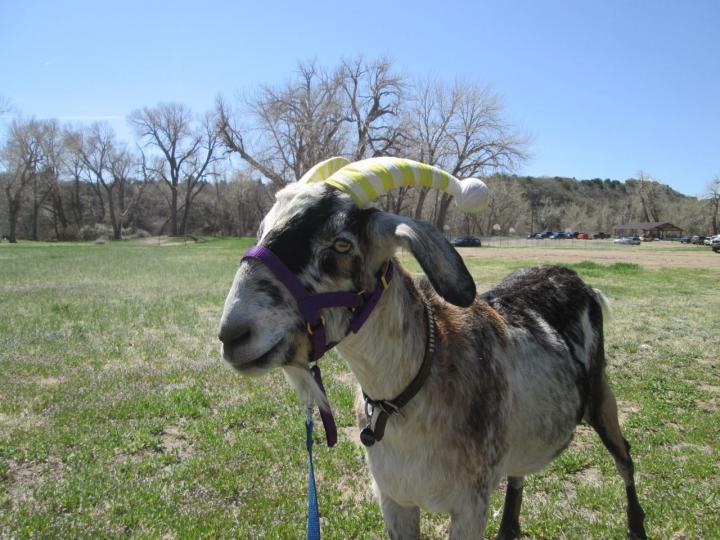 Sputnik has gotten to be quite a personable fellow recently. I hope it’s a permanent change. He used to be so shy and so averse to being touched or crowded. Now he’s finally coming into my space instead of me always having to come into his. He seems to be perfectly ok with being brushed now too. I could never touch him with a brush without sending him into a panic, but yesterday I brushed him all over and he never flinched or acted worried. Who knows–maybe by summer’s end he might realize he actually kind of likes it. 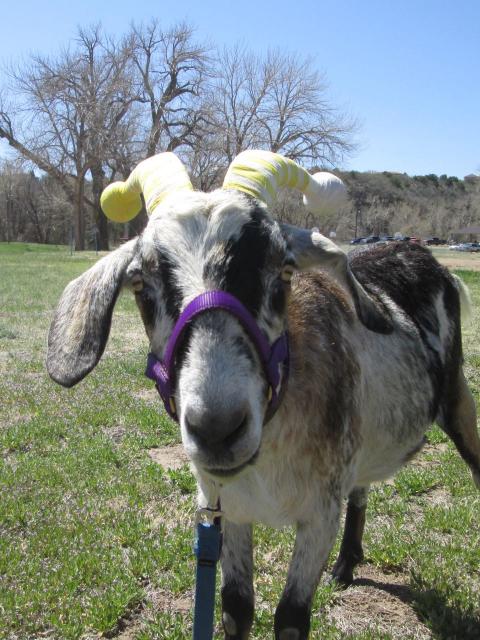 Finn’s horns are getting a very nice spread to them. There’s a lot more horn to wrap these days! Happily for us, Finn is usually quite careful of his horns and I’ve almost never been poked, prodded, bumped, hooked, or scraped by them. We do have to give him the occasional reminder, but usually when he passes close to a person he tilts his head way over to the side now. 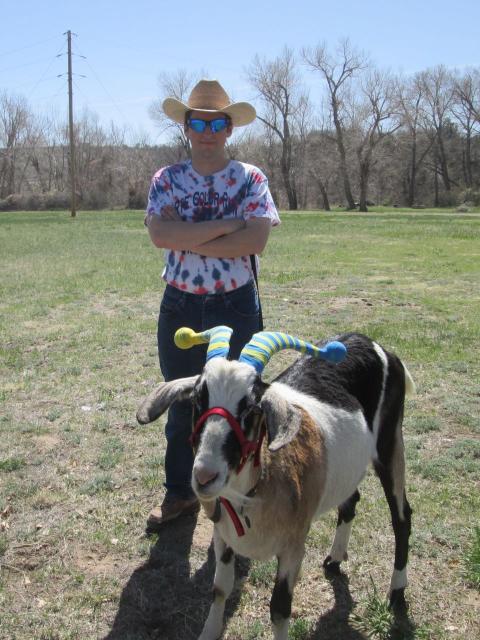 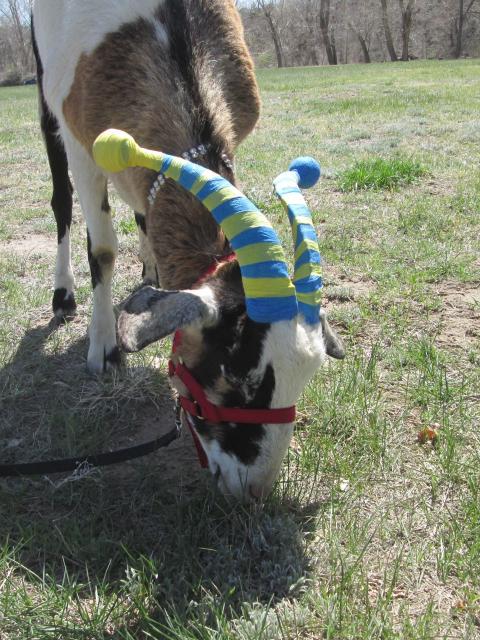