We just got back today from three days of Colorado State Fair fun-ness. For us, the fair kicked off with the most important classes of the weekend. We started off with the timed Obstacle Course run. Phil and I were the only people who brought packgoats to the event, so we decided to do it up right and have our goats compete with crossbuck saddles. It turned out that no one knew who was in charge of setting up the obstacle course, so there was a last-minute scramble to try to round up enough oddball junk laying around the barn to create some makeshift obstacles. We ended up with a pretty good little course, but I was disappointed that there was no kiddie paddle pool. Phil and I had worked with our goats over the summer so they would be experts at this daunting water challenge, but there was no water on this course. The closest we got to water was having to cross a coiled up garden hose.

The first obstacle was the most difficult for us. We had to lead our goats under a table, and while most dairy girls can walk under and barely duck their heads, our boys were substantially taller than the table even without the crossbuck saddles. Several people asked us how we were going to do it and I figured that was a pretty good question. Sputnik showed everyone how it should be done. I crawled under the table so he would know where I wanted him to go, then I said “Repent, Sputnik!” He obediently dropped to his knees, and when I gave the command to “Grovel” he crawled forward in the kneeling position. Hooray for trick training!! His tall rump bumped the table as it passed under and for a second he lifted the whole thing up and I thought it would tump over backwards, but he dipped his hindquarters just a little and squeezed under. The rest was easy. We jumped a broomstick lying across two chairs, walked over a wooden plank thing with steps in it (improvised from a strange old table that was lying upside-down near the arena), crossed the garden hose, jumped onto two metal stanchions in a row, then from a wooden stanchion onto a tarp, and through some alfalfa bales.

Finn went next, and he had more trouble with the table. He didn’t want to crawl under it and he looked as though he might leap onto it instead (very easy for Finn but it would have been disastrous for the table!). After a bit of balking, one of the other competitors ran out and lifted one end of the table so Finn could run under without ducking, much to the amusement of the audience. He completed the rest of the course in record time.

Most of the goats besides Finn and Sputnik had trouble with the broomstick jump. It was no higher than your average stanchion, but most of the girls stopped and stared at it like, “What them heck am I supposed to do with this?” Almost every one of them had to have their front legs lifted over before they would jump with the back. My second entry, Jezebel, was the rare exception among the milking does. She stood straight up on her hind legs and leaped over like a jackrabbit. She cleared it by about a foot, which drew many cheers from the audience. Speaking of the audience, we had many spectators at this obstacle event. Some of them dared their friends to try leading a goat through the course, so then there were gleeful goat owners rushing back to their pens to retrieve goats for these people to compete with. It was hilarious and great fun was had by all.

Here I am with my two winning entries. Because of the ease with which she navigated the table obstacle, Jezebel came in with a faster time than Sputnik. 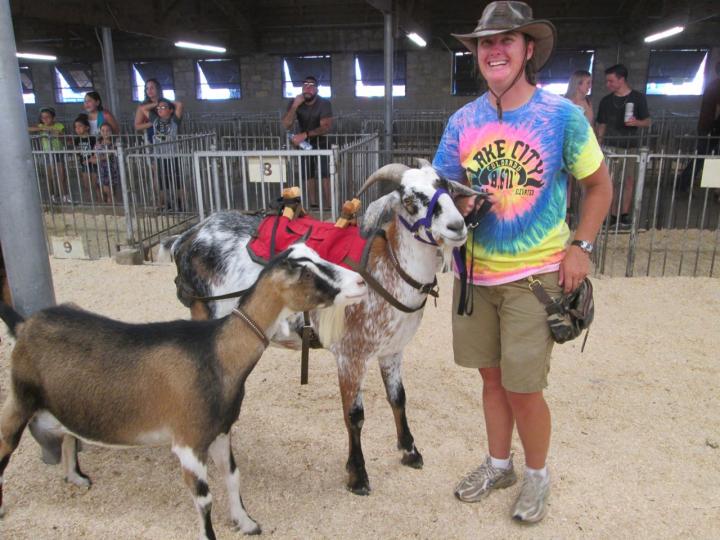 Phil took Finn and Tincup through the course. Tincup has formed a strong attachment to Phil and follows him everywhere. Finn follows Phil everywhere too except under tables apparently. 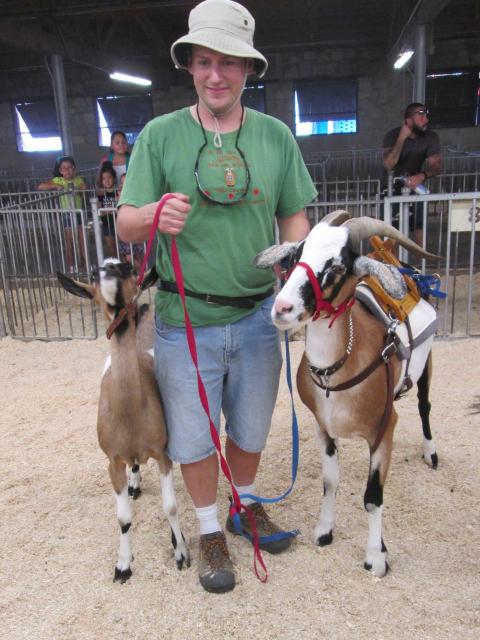 After the obstacle course, Phil and I raced to get into our costumes. Disappointingly, there were no kids entered in the costume class at all this year, but in a surprise twist we did have one other adult competitor! This is the first time any other adult has competed with Phil and I, so naturally we were tickled pink. I keep hoping one day the costume contest will actually become a big event because it sure is fun!

Phil and Tinny went as Jabba the Hutt and Princess Leia. It’s hard to see, but you can just make out the “hair buns” tied to Tinny’s halter. And yes, the goat is wearing a bikini. Apparently she has no sense of shame–she strutted right out there in this thing and seemed proud to wear it. 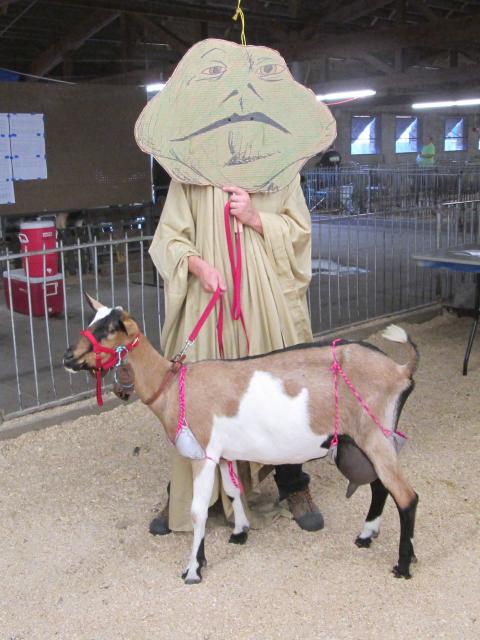 Sputnik, on the other hand, was NOT proud of his costume. The words that first come to mind are “patient” and “long suffering”. I stuffed my poor goat into a hot, itchy chicken suit so he could be Old MacDonald’s chicken-goat (E-I-E-I-O, with a cluck-baa here and cluck-baa there, etc.). The legs are my favorite part, although there is a lot to be said for those ridiculous, unwieldy wings. I had to turn them sideways to get in the gate. I can’t believe Sputnik actually put up with this level of stupidity, but his tolerance paid off. Our costume won first prize and we came away with a big jar of M&M’s, which Sputnik couldn’t get enough of. All I can say is that no goat was ever more deserving! 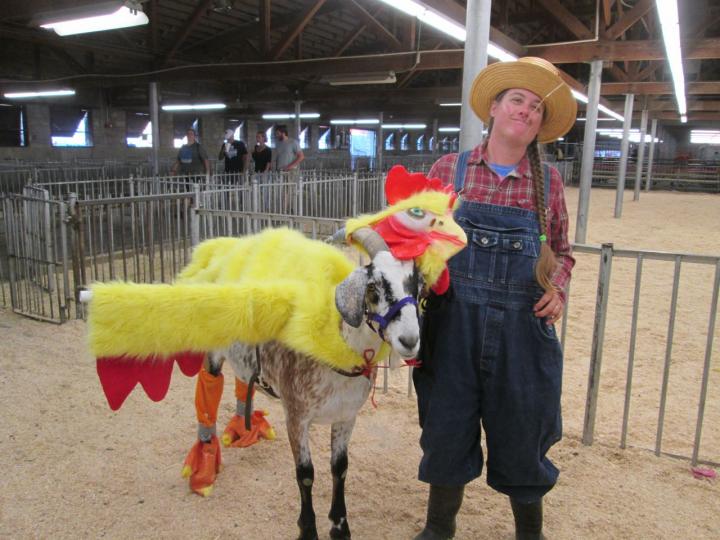 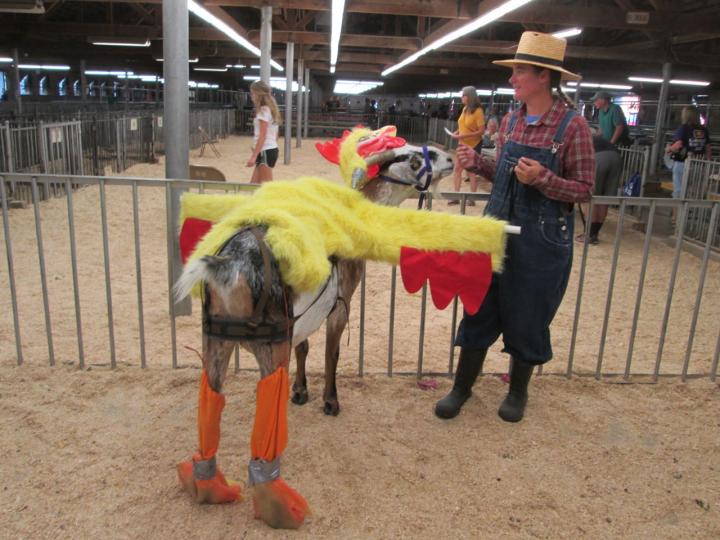 We didn’t win many prizes this weekend, but Phil had fun showing Tinny. Her udder, although large and very easy to milk, is lacking in the area of attachment. 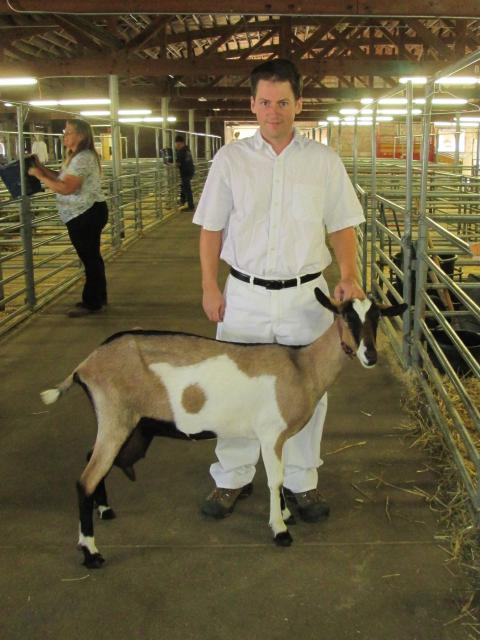 But she was commended for her long bone pattern–something we prize highly in our herd. 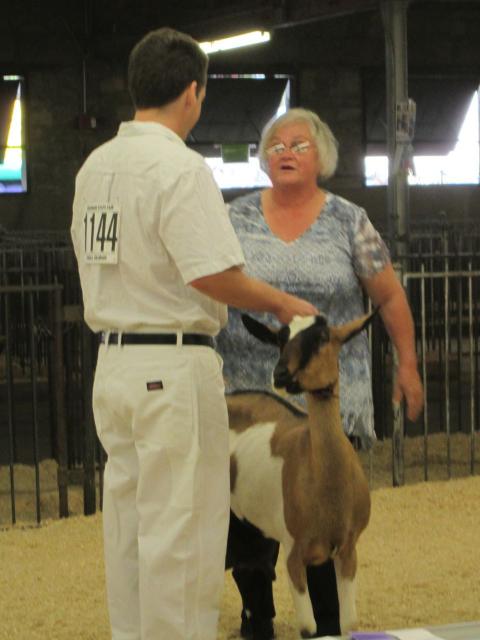 I must also add that Tinny seemed to have more fun than anyone at this fair. She loved watching the endless stream of people walking by, and she adored it when they would stop to pet her. She spent the majority of each day craning her neck over the pen and begging for attention. She spent a lot of time with her front feet up on the rails so she could reach even further, and this never failed to catch someone’s eye and bring them over to give her loves.

1 thought on “Old MacDonald Had A Chicken-Goat…”