Although it is still sunny, wind struck the house with a blast this morning and it promises to only get stronger as the day goes on. So I’m very thankful that Phil and I were able to take the goats out for a nice walk at Graneros Gorge yesterday. It’s not a long hike, but it’s very scenic and the goats love climbing on all the rocks! They had so much fun racing and leaping that they were all panting heavily within a few minutes. 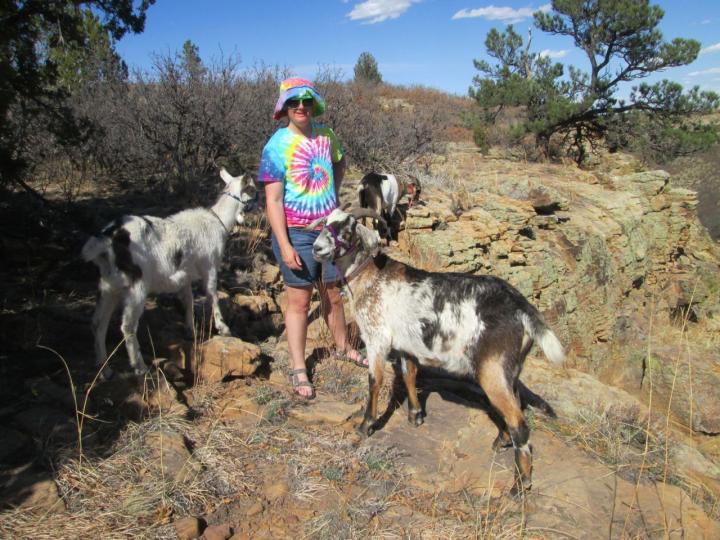 They also took many opportunities to give us heart failure. 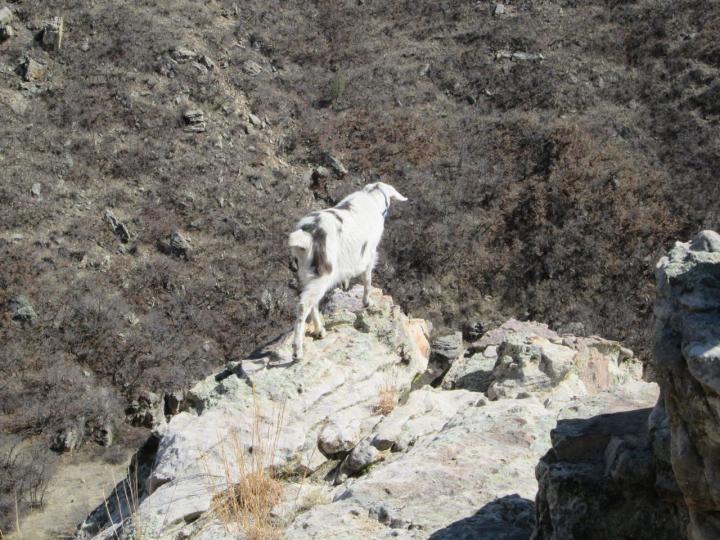 The first thing Finn did was disappear over the precipice. 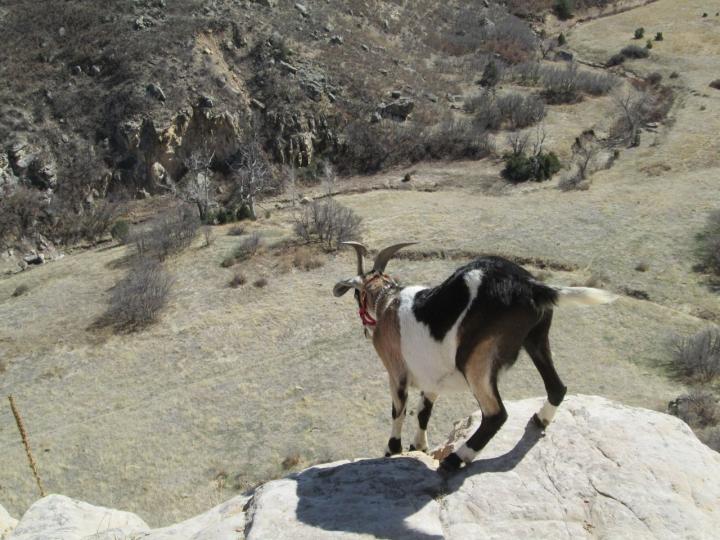 I peered after him and saw nothing but a 50-foot drop and no ledges. I didn’t hear any despairing cries, so I knew he must not have fallen. I called and heard a baa-aah from somewhere below, so I kept calling and walked away. A few minutes later, Finn’s eager head popped up from an entirely different spot along the cliff. I have no idea how he got over there because it looked like a sheer drop-off to me, but I wasn’t going to hang around longer to find out since I didn’t want him to repeat the performance, nor to lead the less athletic Sputnik astray.

Tigerlily is just like her papa–nimble and fearless of heights. 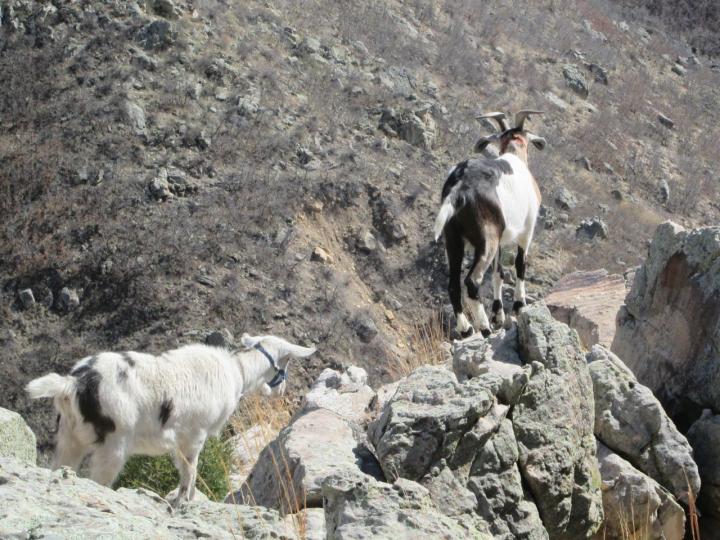 “If I stand on this rock I can be bigger than Dad!” 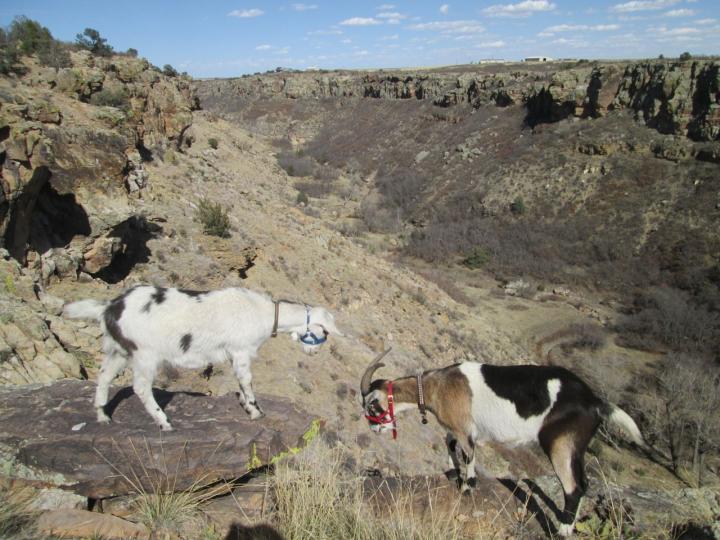 Our “angel goat” has grown into a big, sturdy girl. At not quite a year, she’s taller than her mother, and compared side-by-side to Finn at this age, I’m sure she would be substantially bigger than he was. She gets along very well with the boys. They are dominant over her, but they rarely pick on her because she simply won’t take it. If someone butts her she comes back swinging, and the boys respect her for it. She also loves going out. The last few times we hiked with Finn and Sputnik, we had a hard time keeping Tigerlily out of the truck. So now she’s coming with us. 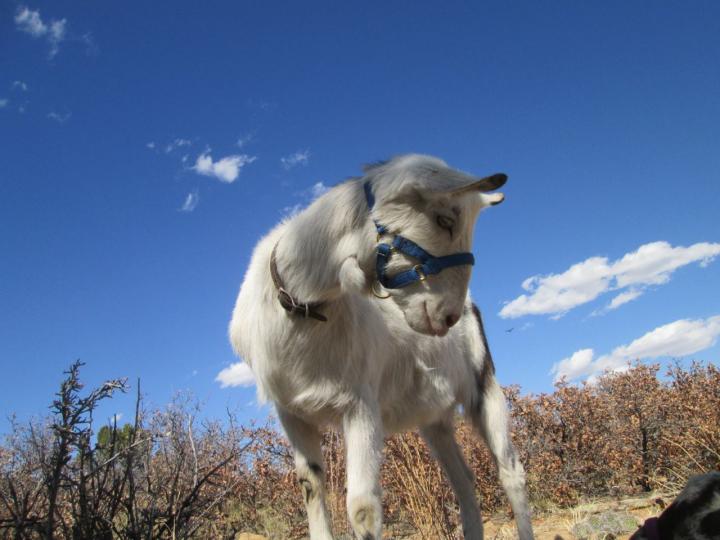 Sputnik blended in well with our surroundings. 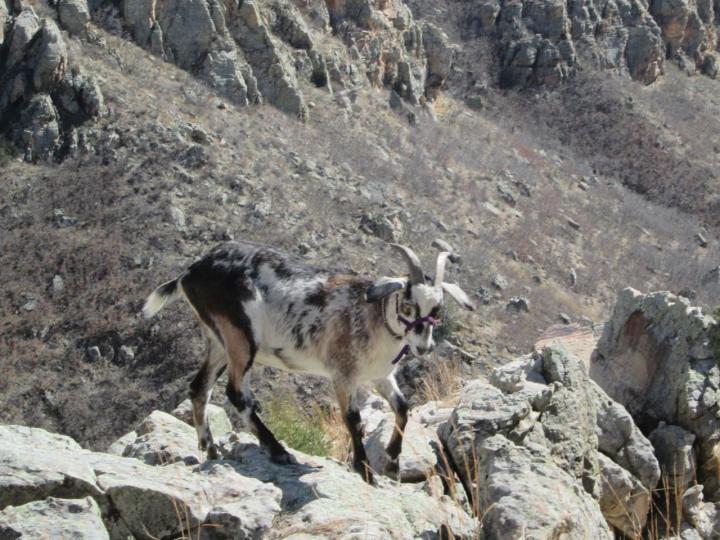 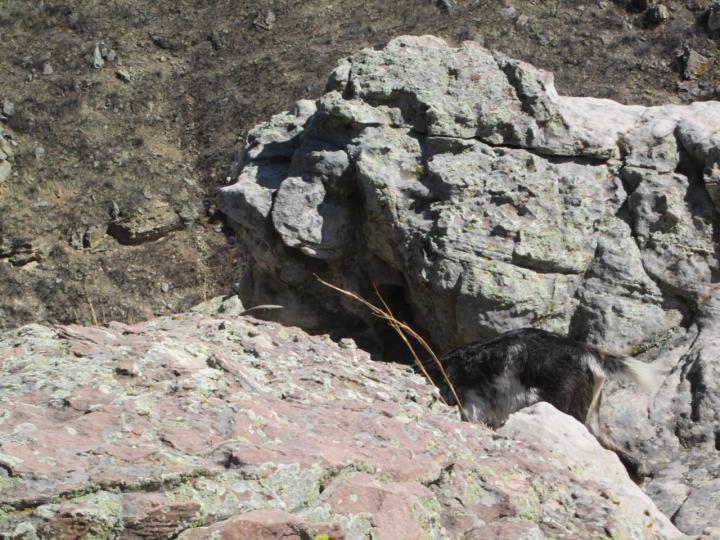 Sputnik was not photogenic on this hike. While Finn and Tigerlily ricocheted from rock to rock, leaning over cliffs, peering behind boulders, and otherwise posing for dramatic shots, Sputnik kept his nose to the ground as he scurried greedily from one dry tuft of grass to another. They way he gobbled up dead foliage, you’d think he’d been starved for two weeks! I’m not sure I understand his tastes–this stuff was not exactly haute cuisine! 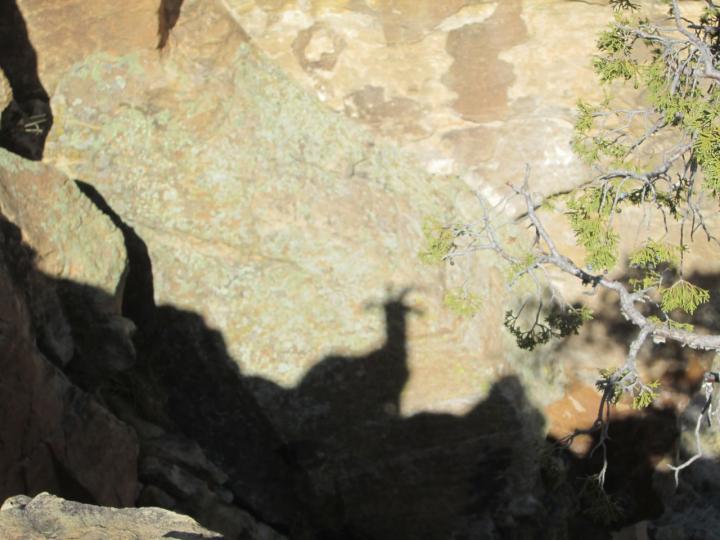 Phil and the crew with Pike’s Peak in the background. 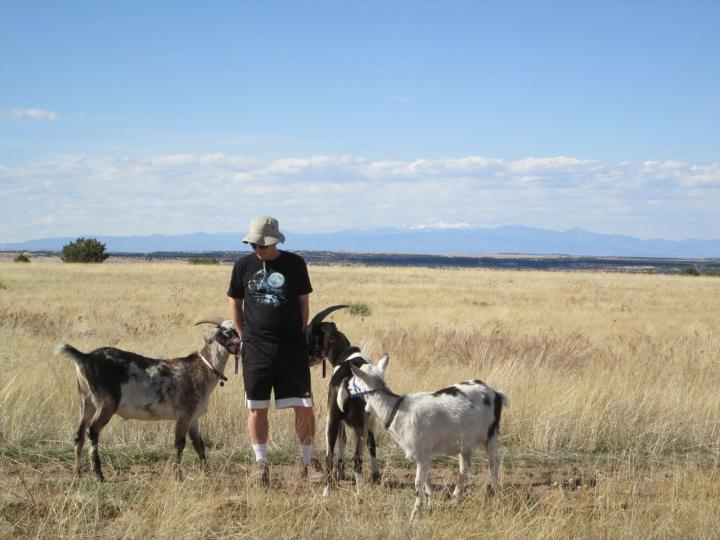 Heading back toward our own Greenhorn Mountains. 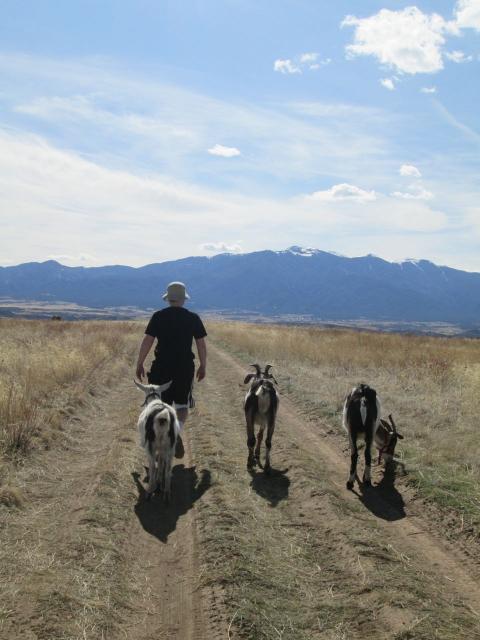 Once we got back to the truck, the goats decided they weren’t leaving. No one would jump into the bed (although Tigerlily thought about it). So we drove off without them. When faced with the prospect of staying there by themselves, Graneros Gorge looked a lot less fun. The goats chased frantically after us until we stopped to invite them in again. Tigerlily jumped right up, but the boys were not quite ready to call it quits. We drove on again until they looked fairly tired and then tried once more. This time Finn loaded up, but Sputnik felt stubborn and I wasn’t going to argue with him. This time we drove off pretty fast, and it didn’t take Sputnik long to start panicking. When I stopped for the final time, Sputnik was coiled and ready to spring before I could even reach the tailgate. I expect it won’t take long for them to figure out it’s much easier to obey the first time!

The day  was so beautiful that even after our hike we could not get enough of the outdoors. So we swung by the grocery store to pick up some hot dogs and marshmallows and we had our first campfire of the season. Cuzco was thrilled. He supervised as Phil shoveled last year’s ash and debris from the fire pit, then he waited next to the rock ring while Phil and I gathered wood and got the food together. He never left that campfire all evening. He stood with his face in the smoke, inhaling the delicious cedar smell with half-closed eyes and rapt expression. He hurried over to the house to wait by the patio gate when he heard Phil tuning his fiddle in the basement. Then as Phil came out playing “Goat in the Rain”, Cuzco stayed glued to Phil’s side all the way back to the campfire. He was mesmerized by the music and his nose never left the bow. After the music, Cuzco stood by Phil’s chair and rested his big, bony old head in Phil’s lap where he stayed for probably 45 minutes as the fire slowly died. None of the other goats particularly like the campfire or the music. This is one activity that Cuzco has all to himself and it brings him back to the days when he was the only one.