It was foggy when we packed up and left Ponca on Friday morning, but we climbed out of the valley into the sunshine of a gorgeous day–a perfect day for traveling and for…UHFing!

Let us go back to 1989 when “Weird Al” Yankovic wrote and starred in a go-nowhere film called “UHF” that later became a cult classic and Phil’s all-time favorite movie since childhood. It was filmed in Tulsa, OK, and since we happened to be driving through Tulsa on our way home, and since many of the places in the film are still there, it became a necessary stop.

Our first stop was “Big Edna’s Burger World”. This is what it looked like in the movie: 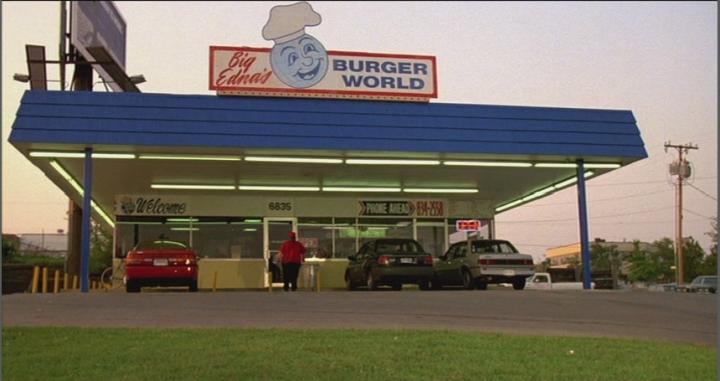 It has since been painted red and is now the home of the “Knotty Pig” BBQ and burger joint. 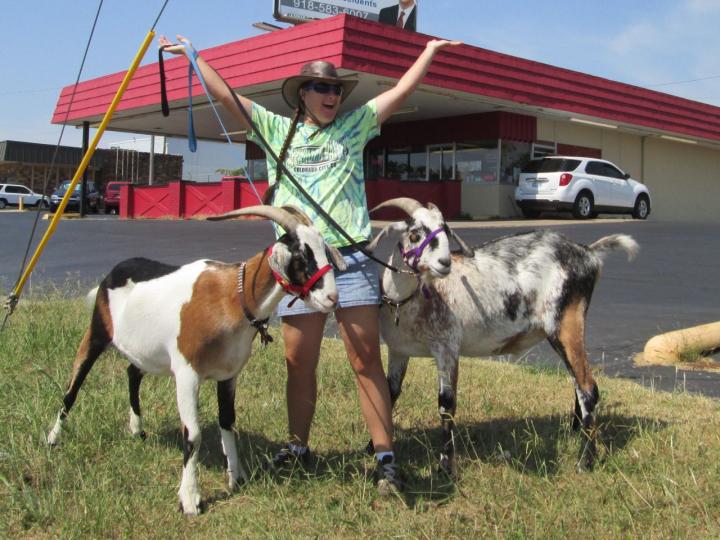 We got there just in time for lunch and boy was it ever GOOD! I’ve never seen such a variety of big, crazy burgers on one menu, and the BBQ was delicious. It was very reasonably priced too. Highly recommend! 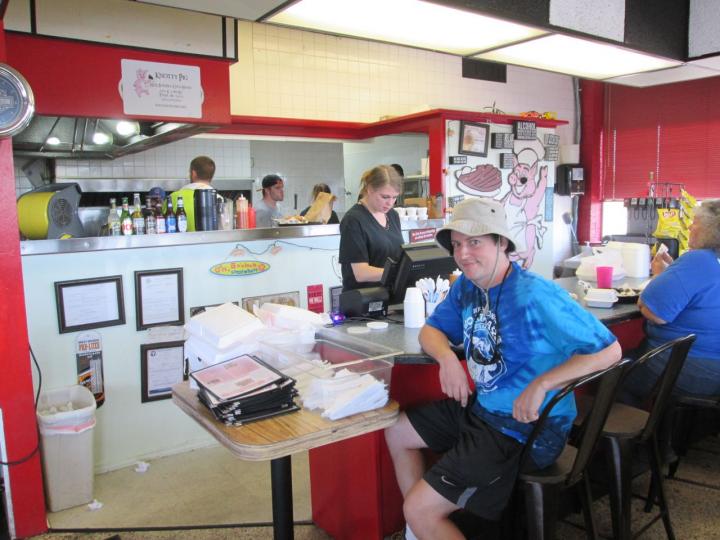 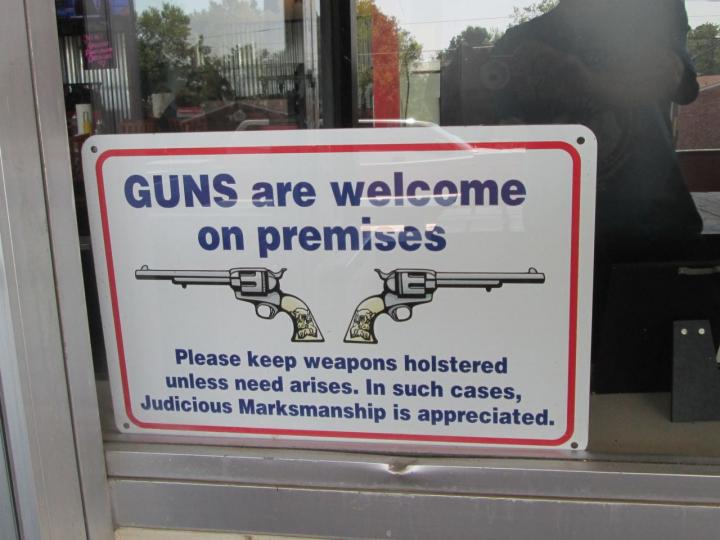 Next stop was the apartment of Raul Hernandez of “Raul’s Wild Kingdom“.

He may not have needed no “stinking badgers,” but I’m sure Raul could have used a couple of goats in his apartment! 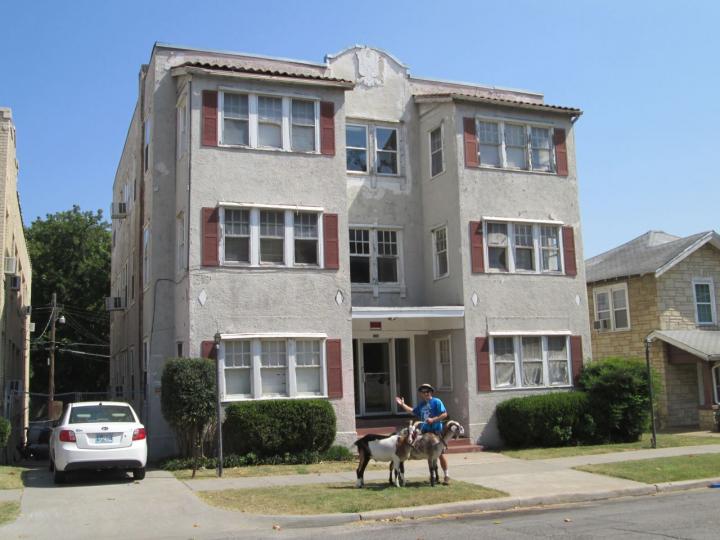 Next up was the cemetery from “Plots R Us” mortuary service.

We didn’t bring our goats in of course, but we snapped a quick shot from the street corner. 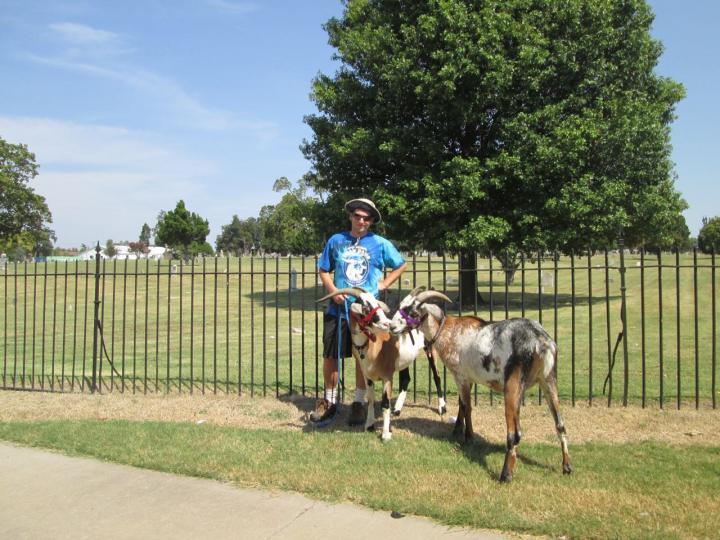 After visiting the cemetery, we walked back to the downtown area on our way to “City Hall” and stopped at a fountain so the goats could grab a drink (yes, I checked it for chlorine first). 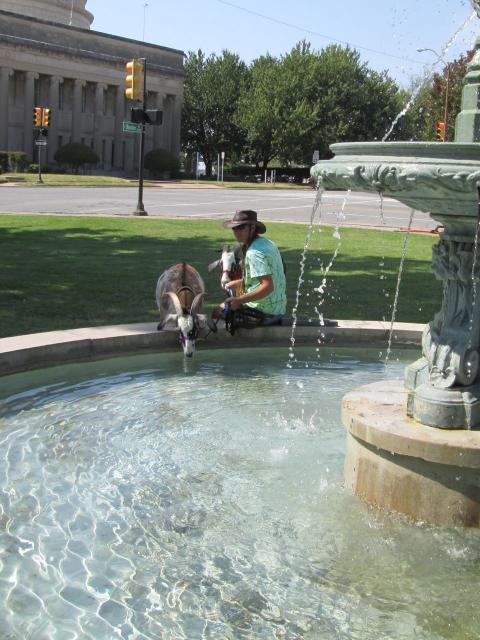 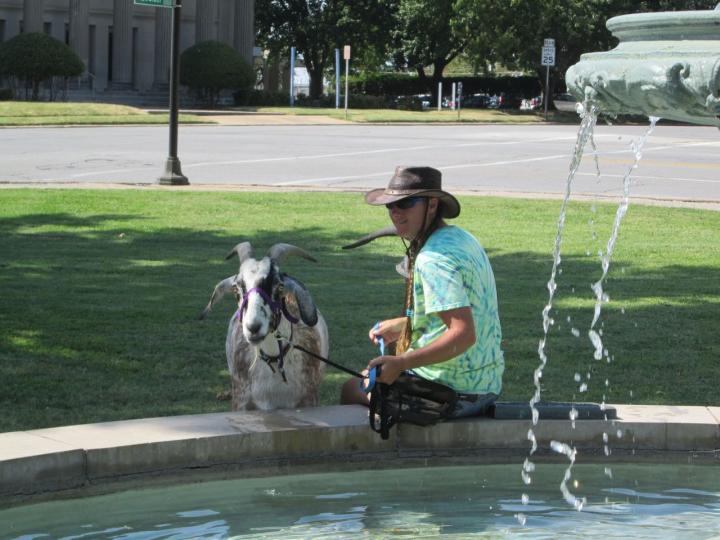 After the goats got a refreshing drink and a rest in the shade, our next stop was the steps of “City Hall” which is actually First Christian Church. 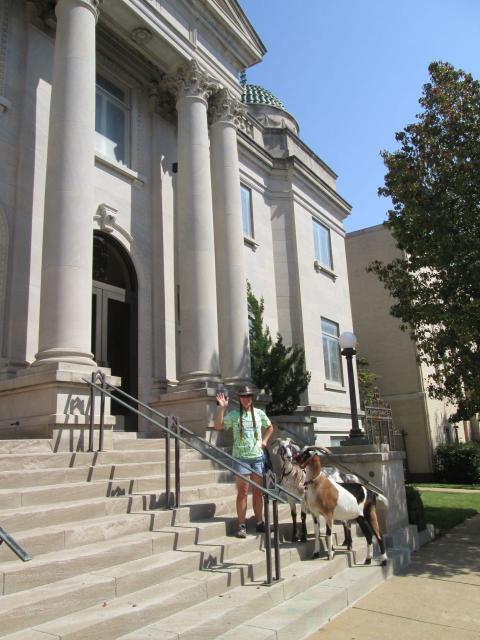 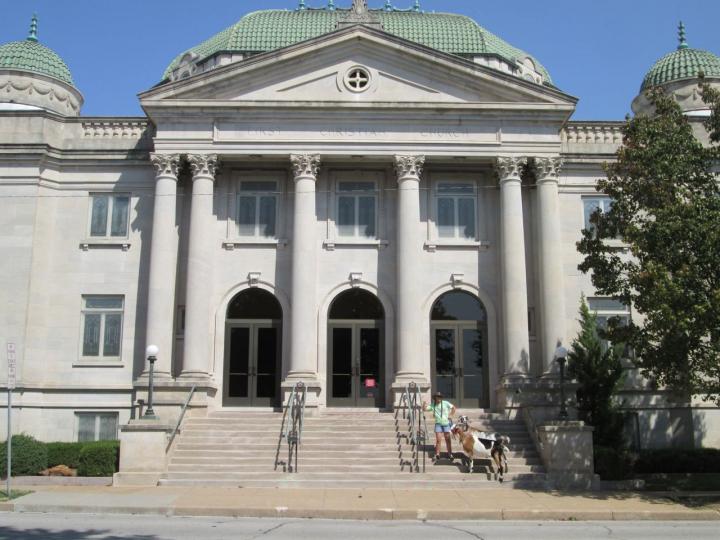 As we were getting photos in front of “City Hall” our attention was grabbed by an uproar across the street. Catty-corner to the church was a Catholic school where the kids were in the playground for recess. They’d spied our goats and were clamoring along the fence to get a closer look. Not wanting to disappoint them, we moseyed over to say hi. The volume was incredible, as was the number of hands poking through the chain link. Every kid was trying to shout his or her question a little louder than their classmates. I’m not sure why Finn and Sputnik put up with it, but they were incredibly good-natured and sidled right up to the fence so the kids could reach them. Phil and I felt shell-shocked afterwards, but I get the feeling those kids will never forget the day the goats visited their school at recess.

Next up was Kuni’s Karate and Weird Al’s apartment.
Some trees and a big truck kept us from getting a good shot, and the building looks a bit different as it’s undergoing some remodeling, but this is the place! 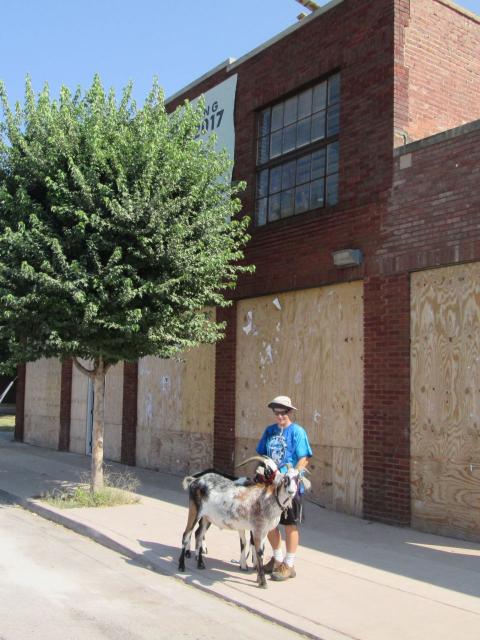 Finally, the pinnacle of our UHF tour (drum roll please!)… 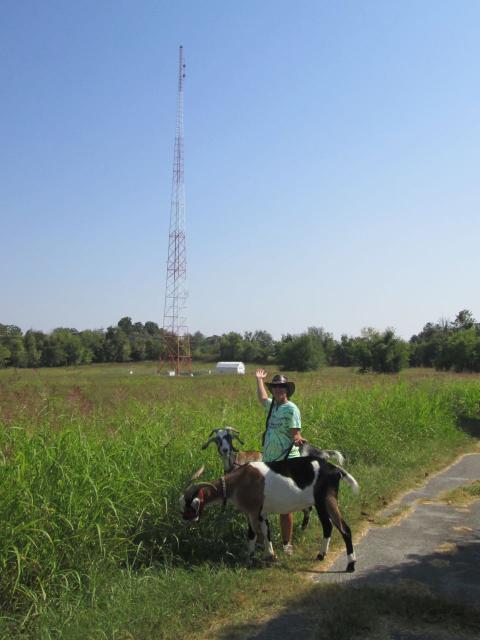 It looks just like it did in the movie except the little shack is long gone. 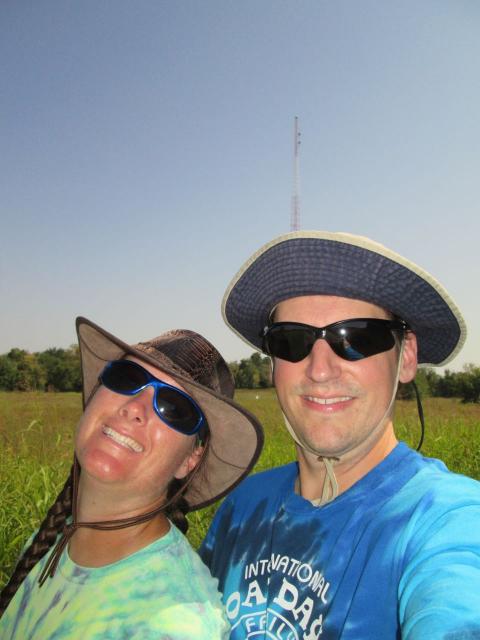 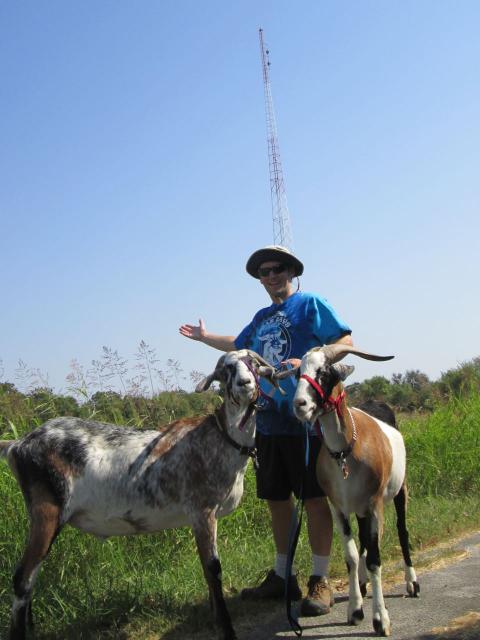 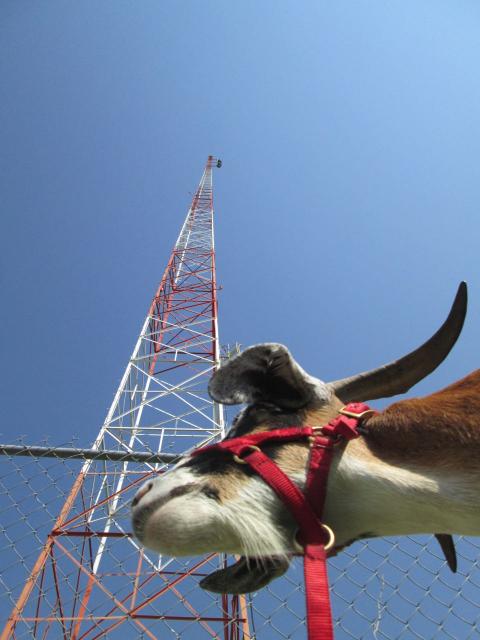 Even the parking lot is still there! 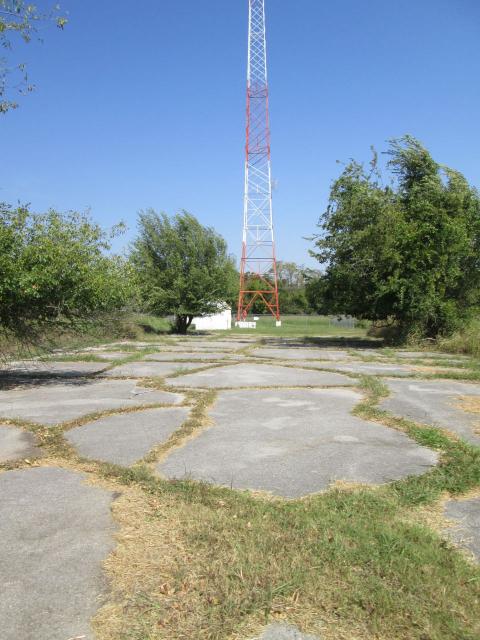 We loved that the registration number ends in “62”. For those who haven’t seen the movie, it was about TV station U62. 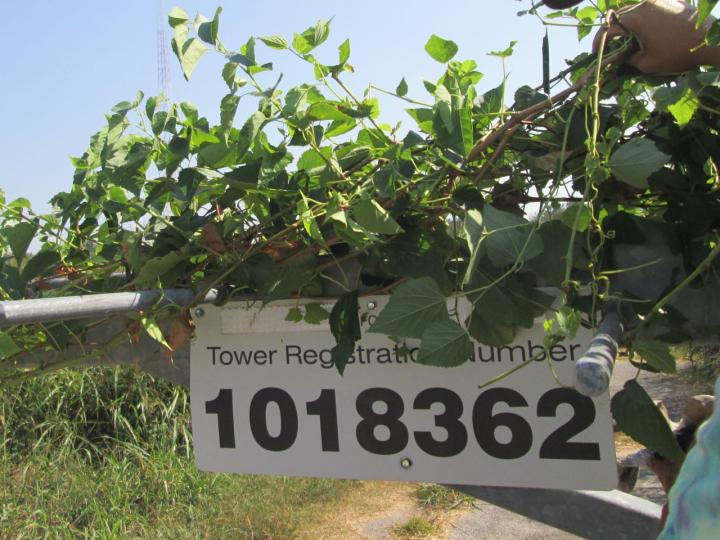 Phil snagged a piece of the parking lot to take home as a precious memento of our wonderful visit to the UHF filming locations in Tulsa, OK. 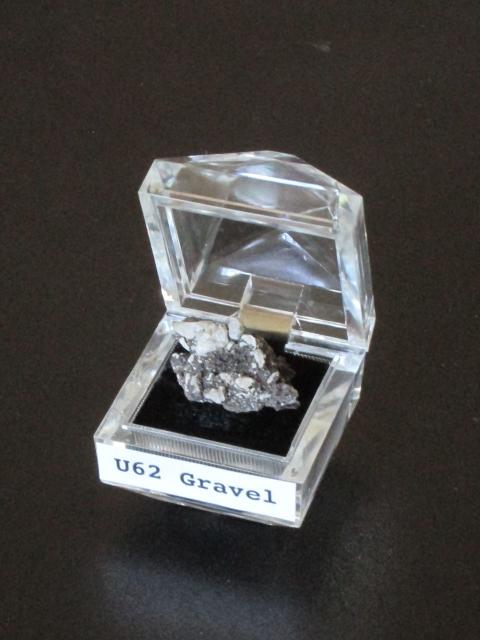