Here’s an update on the boys. At five months old Snickers weighs in at just over 80 lbs. He’s not as heavy or muscular as Finn, but he’s at least as tall if not taller. He’s a long, leggy type goat and he has really nice hooves. 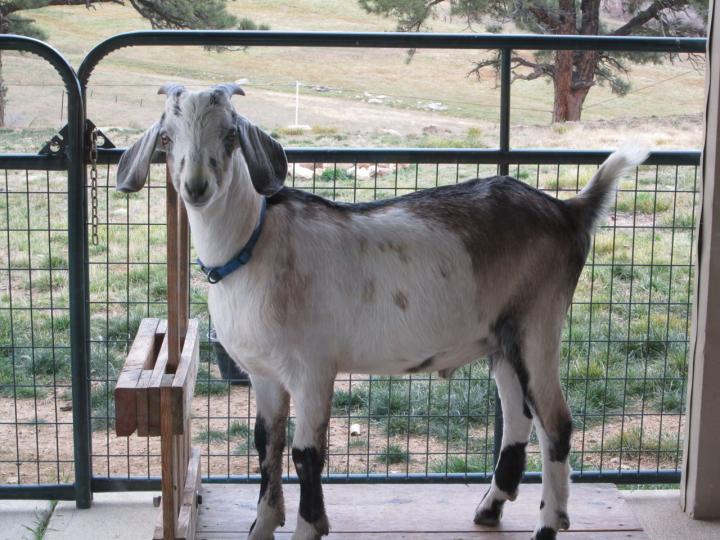 I’ve recently taken to calling him “Fu Manchu” because of his funny face markings. 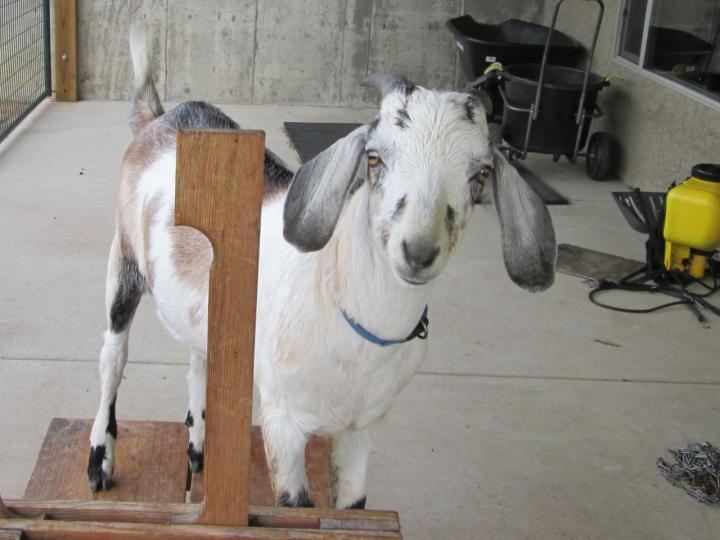 Sputnik learned to jump on the igloo on command today. I’d just point to it and he would hop up there to get a cookie. 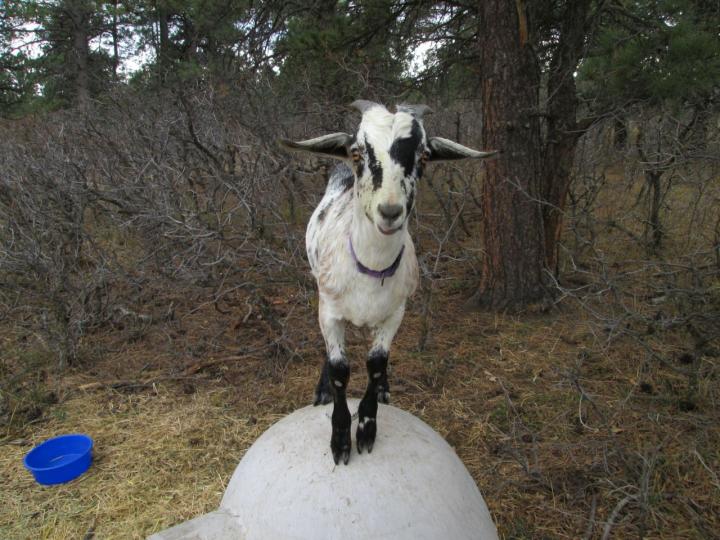 Look at the above photo just a little bit closer. What a little goofball! 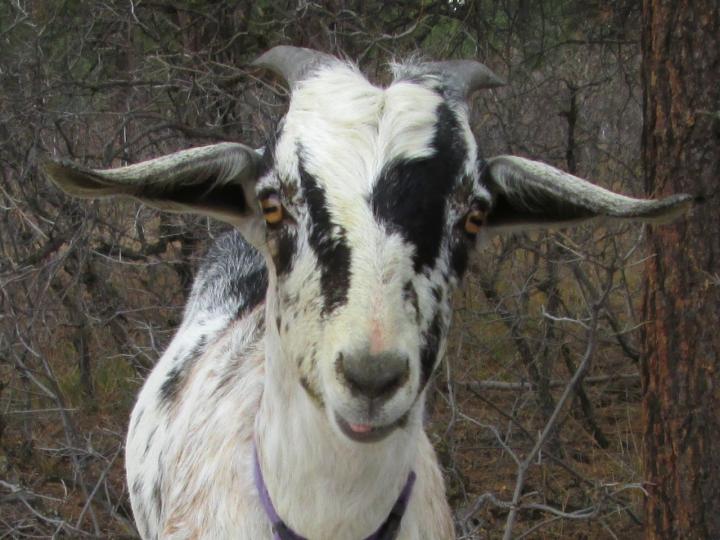 I tried to stand all my boys up for posed photos, but no one wanted to cooperate. 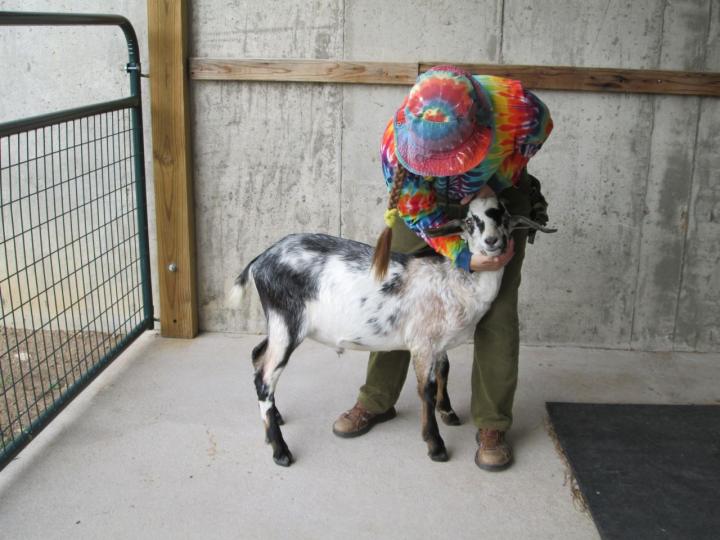 Sputnik was the best of the bunch. Here he is standing nice and square for the camera. (Snickers and Finn, take lessons.) 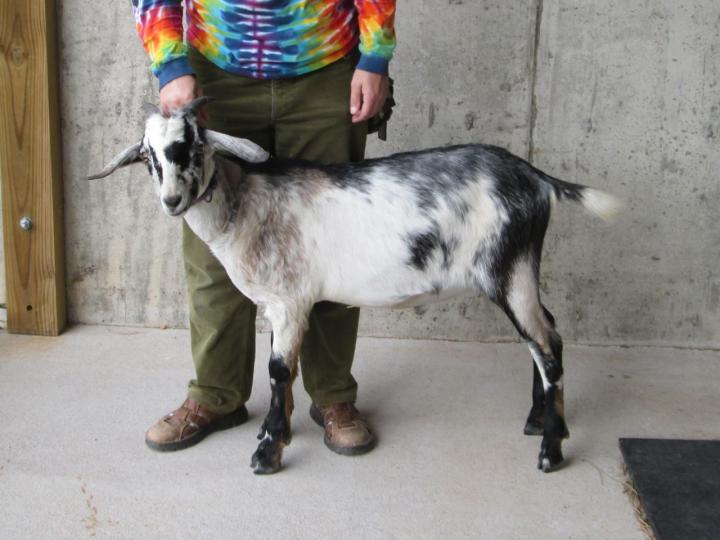 Snickers weighed in at just under 75 lbs. He’s still the smallest of the bunch but he’s got nice proportions and he’s the most fun to play with because he’s the least bucky of the three. He’s the only one without a sticky yellow face right now, and I can still reasonably “shake hands” with him without totally defiling my fingers.

Today we worked on his “lie down” command. He goes right down on his knees with just a touch, but he doesn’t want to drop his back end and he tends to panic if I force it down like I do with the others. I usually end up pulling one of his hind legs out from under him and lowering him down, which he seems to tolerate well for some reason. Today he did something funny when he was down, though. He likes to lean on me when he’s lying down, and today I thought I’d stand up and see if I could get him to stay down. As I eased my knee out from under him, he slowly fell over onto his side and ended up flat out on the ground where he lay without moving. He did this twice. I had to roll him back up on his chest and fold his knees back under him, at which point he jumped up and ran away. He’s a funny little character.

Finn is almost too big for the stanchion now. It’s not that he’s too tall or long, it’s that his neck is too thick! He’s nearly six months old and weighs between 85-90 lbs. He hasn’t grown very much since the rut started, and my pudgy little guy is quite trim and muscular now. I can feel his ribs when I rub his sides. Two months ago I wasn’t sure if he had any, the little blubber ball! 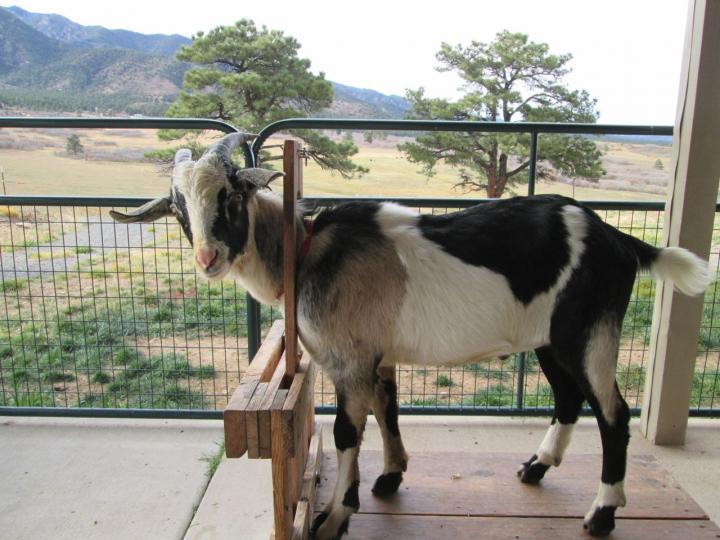 He’s as sweet and friendly as ever and he constantly wants to cuddle up to me and rub that sticky yellow face all over me. Unfortunately, these days he’s about as un-cuddly an animal as anyone could hope to meet! 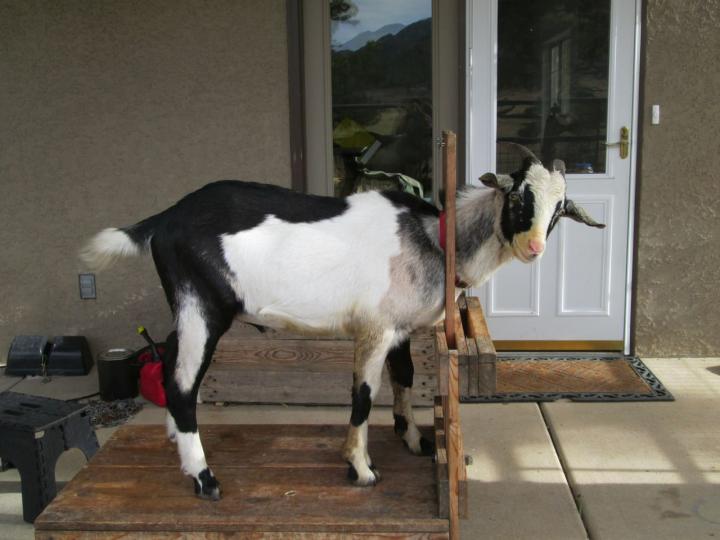 Today Finn learned a new trick! I taught him to stand on my milking stool and spin a circle. It’s difficult now that he’s so big, but he’s a very willing and attentive pupil. He’s probably not *quite* as smart as Sputnik, but he’s less hyper so sometimes Finn learns stuff faster simply because he pays better attention. 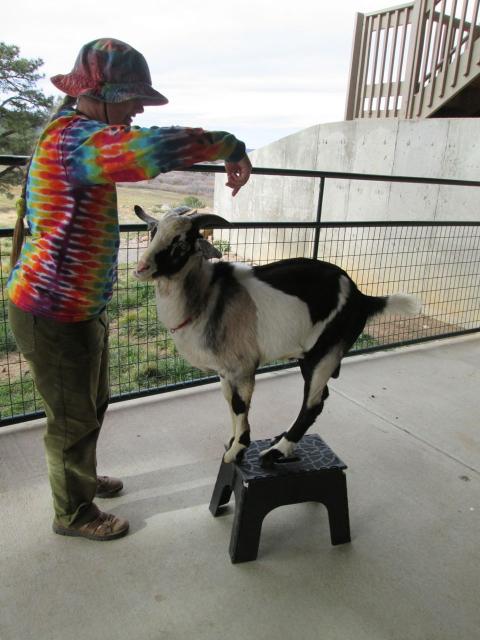 Can you beat this pose? I was trying to stand him up nicely for the camera and boy did he stand! He also generously annointed me and everything else within a three-foot radius. What he had observed (and I had not) was that Petunia had sauntered casually around the corner about 30 feet away. 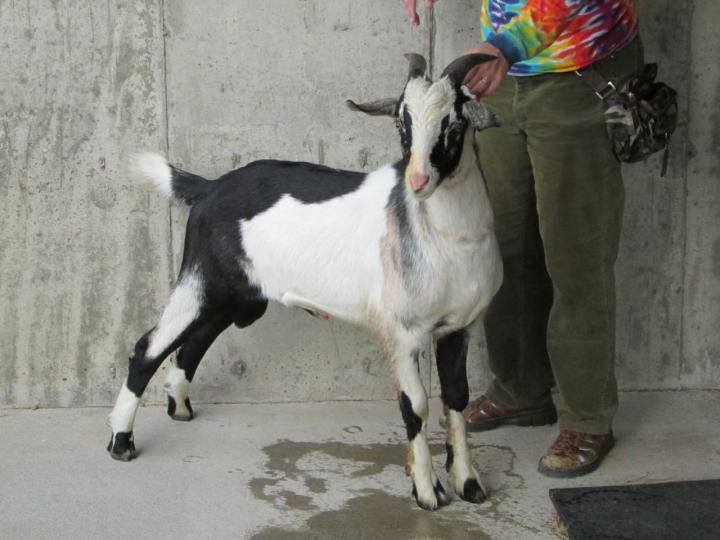