Our third day in Escalante threatened rain again, so we thought we’d pick a couple of shorter hikes outside of town where the sky looked less ominous. The first one was Calf Creek Falls. We’d been here before with Nibbles and Cuzco in 2012, but it was so pretty we wanted to see it again even though this is a ridiculously popular trail. The number of people who stop us and ask about the goats makes the 5-mile round trip take a very long time. On the plus side, it is awfully fun to show off our little herd.

The overcast sky made the colors less vibrant this time, and the day was much too cold to tempt us in for a swim even though when I was last here I swore I’d bring my bathing suit on the next visit. However, the falls and the pool are beyond breathtaking no matter how gray the weather. 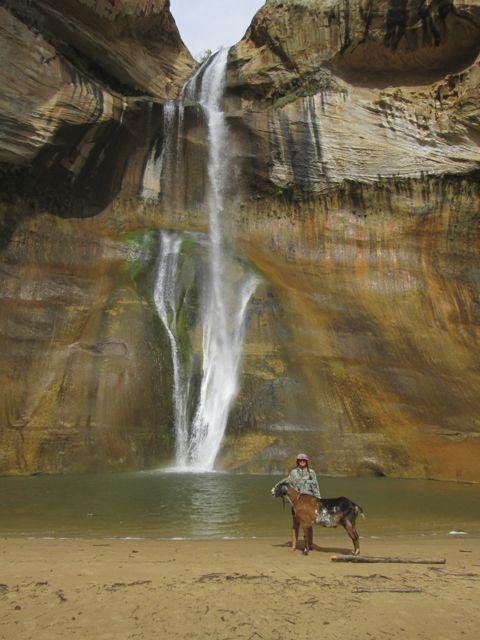 Phil wanted a picture with his goats by the pool too!

Phil did eventually achieve some level of success getting them near the water. 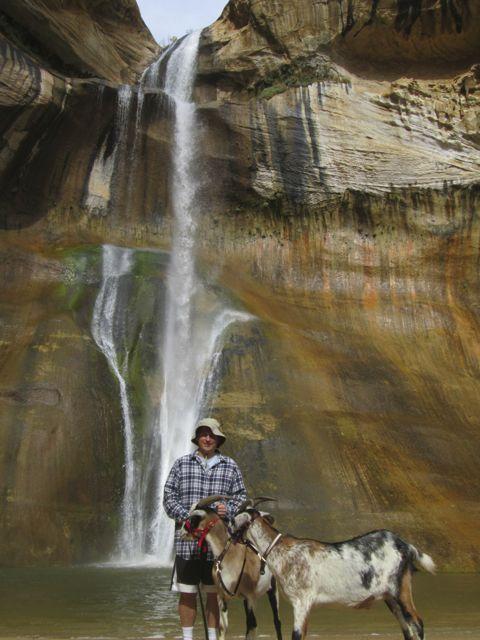 But since I’m mean, I decided that standing next to the water wasn’t good enough. I hooked Sputnik’s halter to Cuzco’s collar and dragged him with us across the shallow end.

I thought maybe Sputnik would be brave enough after one crossing to follow Cuzco back voluntarily.

Clearly I was wrong. I had to go back over and fetch him, and he wasn’t happy about it.

“Brave boy, Sputnik!” Nose-petting and treats were in order.

I eventually decided that Sputnik had been water-traumatized enough and we made our way back to shore.

It was gratifying when he followed me willingly down to the waterside to pose for a photo. It’s nice when training pays off!

Finn was a lot more willing in his water lessons, and he took the courtesy of not splashing me like Sputnik had. Sputnik  the drama king had a tendency to lift his front feet entirely out of the water and slap them down with each step, soaking both of us. Finn walked like a normal goat, which was a nice change.

Some nice folks we met on the trail took photos of us and the goats.

The trail was cool, damp sand and smooth rock the entire way, so I gave my sandals to Cuzco to carry almost as soon as we left the trailhead. He only dropped them in a few steep places where they slid off the back. For the entire five-mile trip he balanced those shoes carefully and never shook them off or tried to lose them on a tree branch. I loved hiking barefoot at the time, but I regretted it that evening. I forgot that when one walks barefoot, one places their feet differently and uses different muscles than when one wears shoes. It’s been many years since I went such a long way in bare feet, and I felt it! I ached from the hips down and was glad for a soak in the hot tub that night! 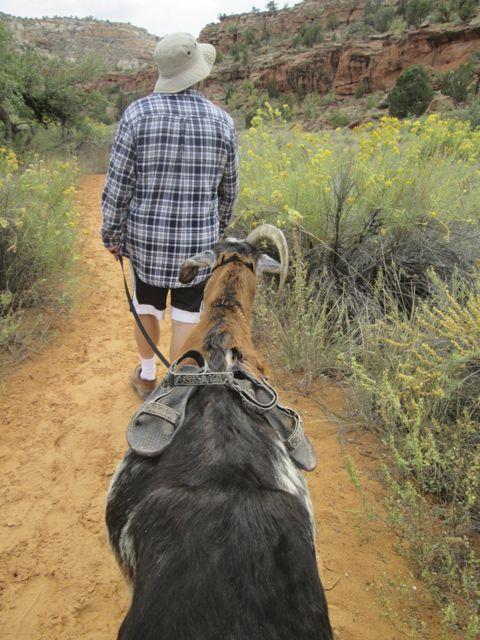