Today the goats got their annual fruitcake treat, and of course Cuzco got most of it. Only a few of the goats really like it, and since Cuzco really, REALLY likes it (and because he’s the biggest and the oldest), he insists that he should have ALL of it. However, we made him share a few small bites with Nubbin, Jezebel, and Finn. Nubbin and Jezebel ate it like candy, Finn was politely interested, and the rest of the goats weren’t convinced it was edible. So Cuzco happily gobbled down their portions. 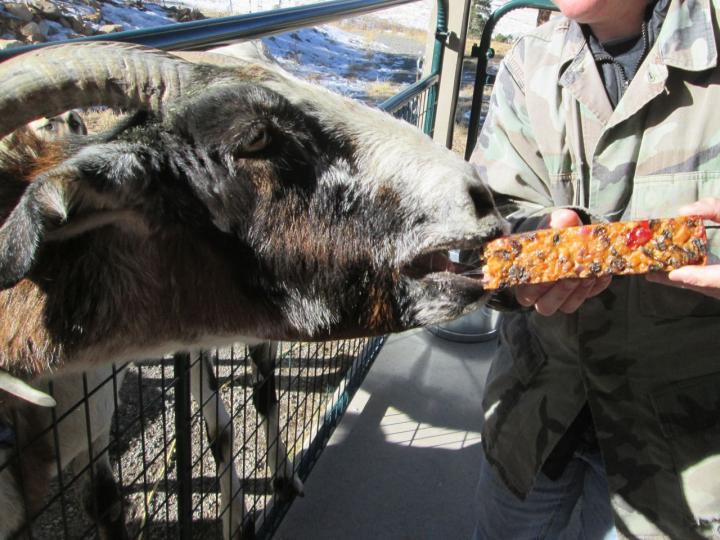 Finn and Sputnik got new Cuzco-sized halters for Christmas. They were outgrowing the old ones. Sputnik’s halter recently began riding so low on his big Roman nose that it was starting to slide off the end of his face. The new one rides comfortably above the bridge of his nose. 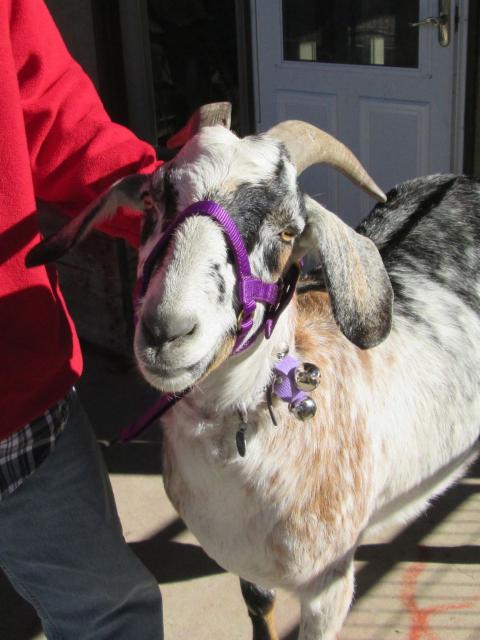 Finn didn’t quite need a new halter yet, but since he will by spring, we got him one anyhow. Both goats also got some nice little jingle bells in colors to match their halters. 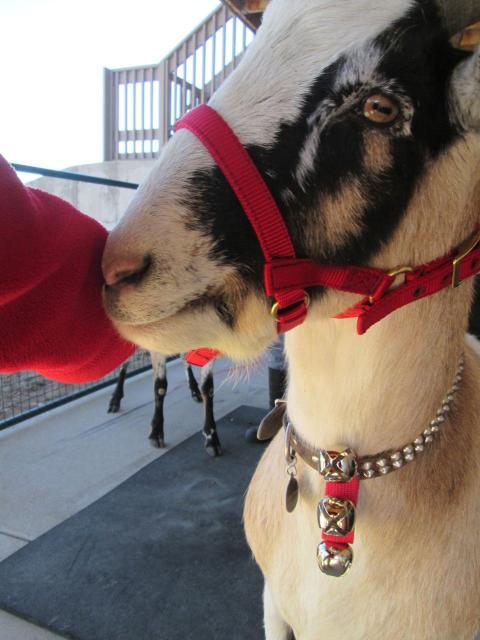 Sputnik has been very full of himself lately–challenging Finn, pounding the young bucklings, picking fights with the girls, etc. But today with the jingle bells on his collar he was extra frisky! Every time he reared on his hind legs, the jingle bells would jangle. So he started hopping around all over the place and rearing up at every goat in the herd. Then he got in a fight with Finn too close to old Cuzco, and Cuzco made them stop. So Sputnik jumped on rocks for me instead. I taught him that when I say “Stool,” it means I want him to stand on whatever thing I’m pointing at. He’s been very enthusiastic lately and has started jumping on every rock along our walking route in hopes that I’ll give him treats for every one. He’s mistaken, but he sure is cute! 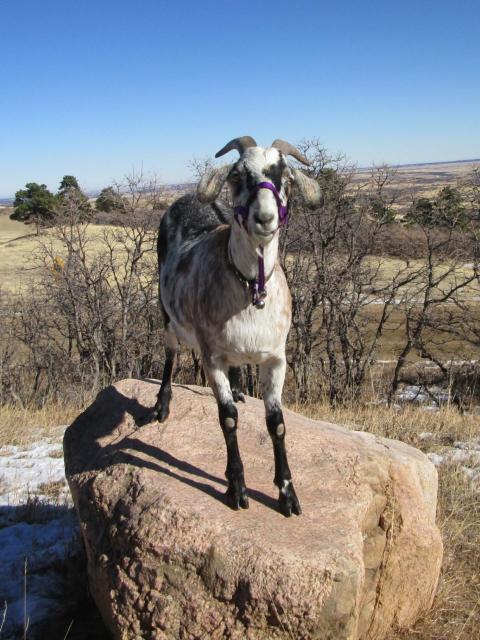 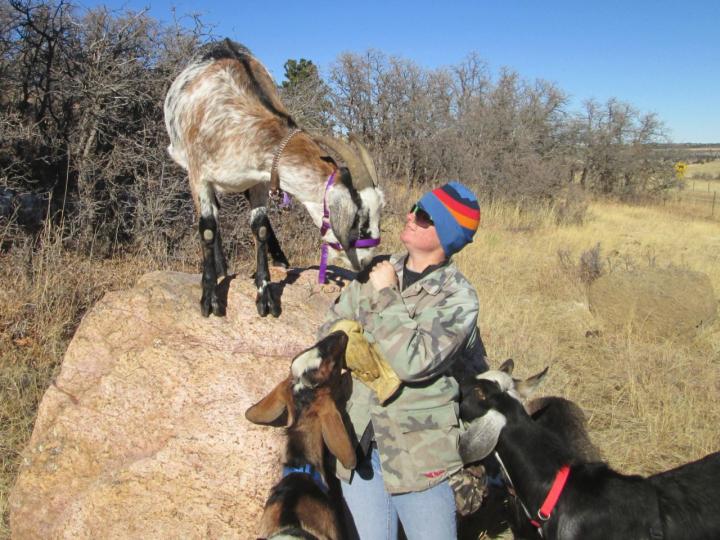 Sputnik didn’t believe me when I told him there is no Santa Claus. 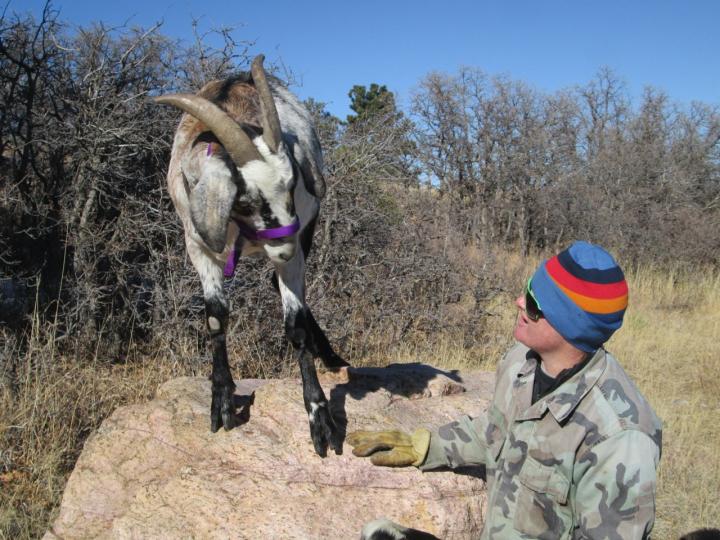 We had a hellacious wind storm on Christmas Day. We went out for Christmas Dinner at a friend’s house and we were afraid we’d come home to find our house and all our goats blown away. Doing chores in 50 mph winds is no joke! I lost a load of hay and four buckets. Today Phil and I took the goats and wandered around our property picking up pieces of soffit, shingles, and insulation from our roof. I found two of my missing buckets lodged in the bushes. The big tub I used to carry hay had been whipped right out of my hands (with the load of hay in it) and I found pieces of it scattered across our pasture. The fourth bucket is probably in Kansas somewhere. We lost two trees. However, Cuzco would like everyone to think it was he who knocked this big tree over. That soffit in my hand was found clear on the other side of our property and a very long way from our house! 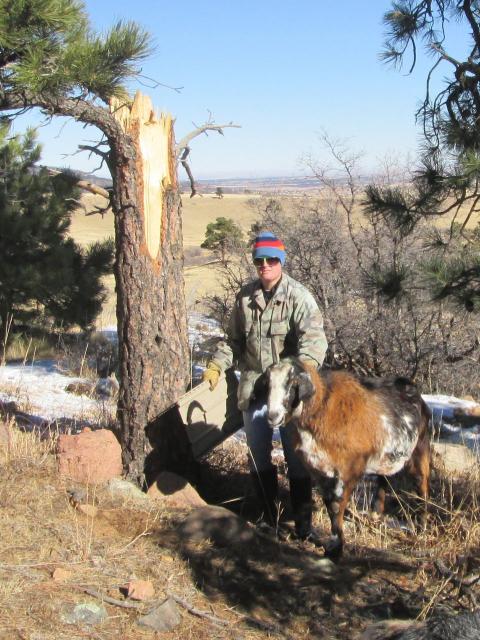 I was sad to lose this big tree. The other one had pine beetle holes in it so we would have lost it in the next six months anyhow. But this one looked perfectly healthy until the wind took it. At least it was not next to our house, nor any goat pens, nor any power lines! The goats will be feasting on this for months! I won’t be able to cut it up for a long time because it’s so green. 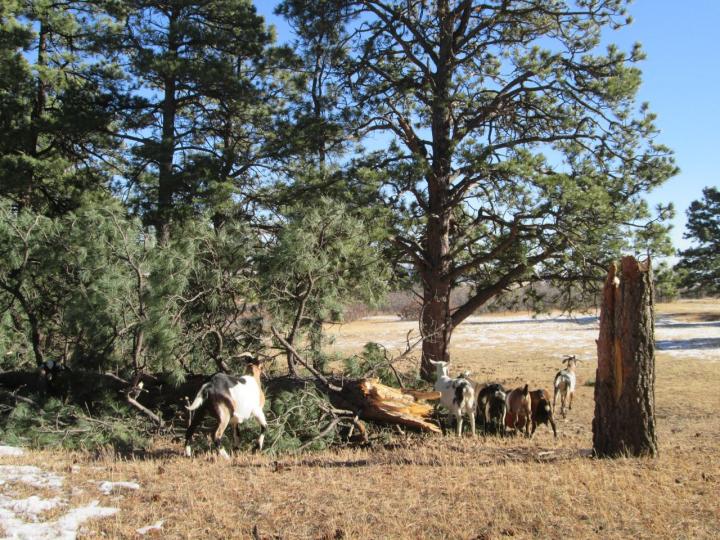