It has been an exciting weekend here at Goat-O-Rama! Last night was the annual Beulah Christmas parade of lights, and this year we took Finn and Sputnik instead of old Cuzco, who is probably not up for the long drive followed by a cart pull these days (although I have to say, the old fellow is doing remarkably well this winter!).

The parade was interesting this year. The weather was almost balmy–a stark contrast to the blinding blizzard and treacherous roads we battled last year. I got the boys harnessed and decorated while Phil put on his Santa suit. I dressed as an elf (no pictures of that unfortunately–or maybe fortunately, depending on your point of view). 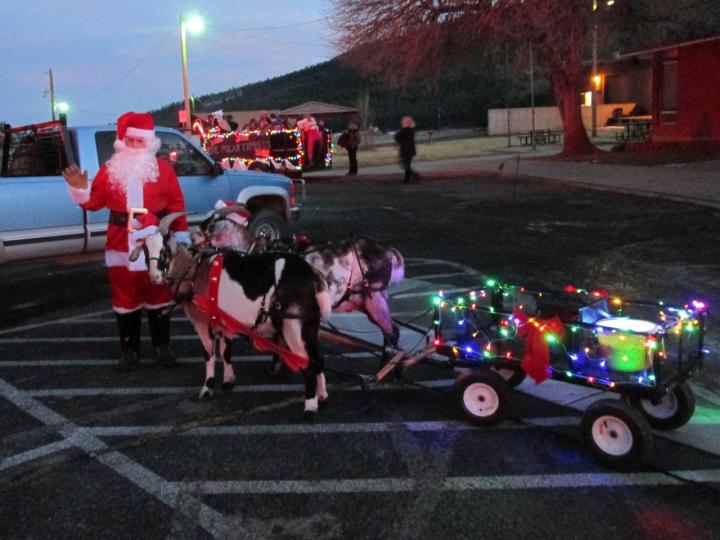 The boys were very fractious at first, and it was largely me and Phil’s fault. We’ve hardly taken them driving at all in the last three months so they are very out of practice. We kind of sprung this on them with only one drive earlier in the week. Phil was rusty at driving, the boys were rusty at pulling, and this was their first time to be driven out at night other than the Halloween event where I led them. I told Phil to trot them up and down alongside the parade lineup and let them see everything instead of standing around getting spooked and keyed up. But Phil couldn’t hear a thing under the Santa beard and kept standing them in one spot, much to my chagrin. I couldn’t understand why he wouldn’t take them up and down like I said. I was about to do something about it when the fractious goats suddenly took matters into their own hooves and swung violently to the left, upsetting the wagon and dumping poor Santa onto the pavement in an undignified heap. It was embarrassing but not injurious. No goats or Clauses were hurt and the wagon was quickly set upright again. After that Phil kept the boys moving until the parade was ready to start. Moving helped them focus and they soon began to settle down and listen. 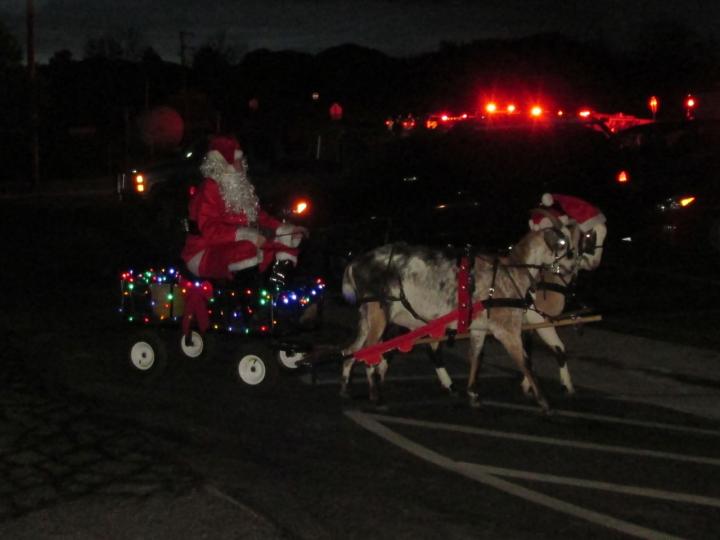 We were told to get in line behind the fire trucks, which meant that we were the first “real” parade float. We started off and the boys went very well together while we followed the trucks. But soon those trucks began to pick up speed and we were jogging to try to keep up! It’s a good half-mile from the lineup area at the school to the main gathering area in the center of town. The streets were very dark on the way there and when the fire trucks disappeared in the distance, taking their lights with them, the goats became a bit hesitant about striking out alone and in front on the deserted road. I went on ahead of them and we jogged most of the way there but we never caught up to those trucks. They acted like they were en route to a four-alarm fire, not leading a Christmas parade! So when we got to the town center we felt like we were heading up the whole shebang. The goats went fine again once we were under the lights and I was able to walk behind the wagon and throw candy. The only time they truly balked was when we started to leave the lighted area and there were dogs on leashes barking at them from the dark. I went ahead of them to provide moral support and they went on just fine.

We were all pretty tired when we got back to the truck. We’d jogged along much of the parade route trying to keep up with those crazy fire trucks, and the town of Beulah has a lot of hills in it–some of them rather steep. The boys pulled their wagon up and down quite admirably and Santa never had to disembark. Next time there’s an event, though, we’re going to make sure and get in some practice beforehand. It wasn’t fair to spring this on the boys without preparation even though they did rise to the occasion.

We were back in Beulah again this afternoon for the wonderful annual Yule Log festival, which is easily the highlight of our Christmas season. The goats are apparently a highlight for the folks organizing the festival as well, since we are now regularly invited to attend. The first thing we did after we arrived was to entertain some children and greet Father Christmas. 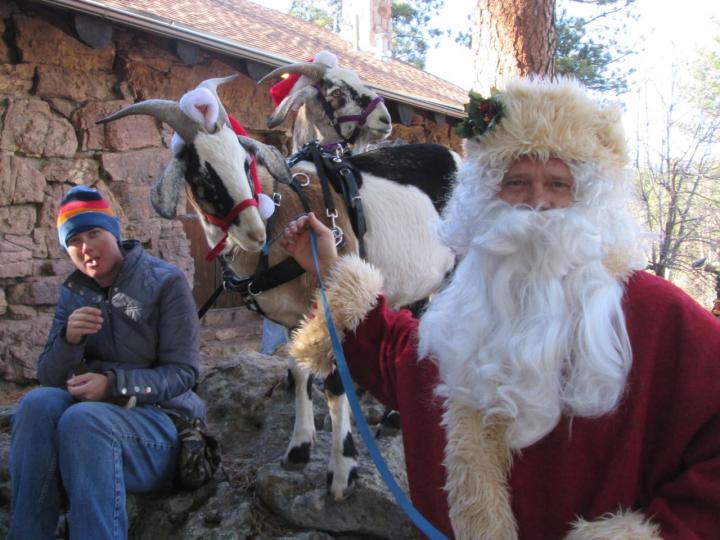 We sat outside the lodge and listened to the muted sound of Christmas carols coming from the hall while two little boys ran back and forth collecting pine boughs which the goats gobbled down to the kids’ endless delight.

After the singing and Yule ceremony it was time to hunt the log! When everyone scattered toward the woods, Finn and Spunik took off with all the enthusiasm of a couple of tornadoes. Sputnik acted like he wanted to pull my arms out even though we were already running. Those goats were determined to be the first to sniff out that Yule Log! I’m sure they heard about our plans to have them help pull it back and they wanted to thwart us by finding the log first. Because the first one to discover the Yule Log gets to ride it back to the lodge! 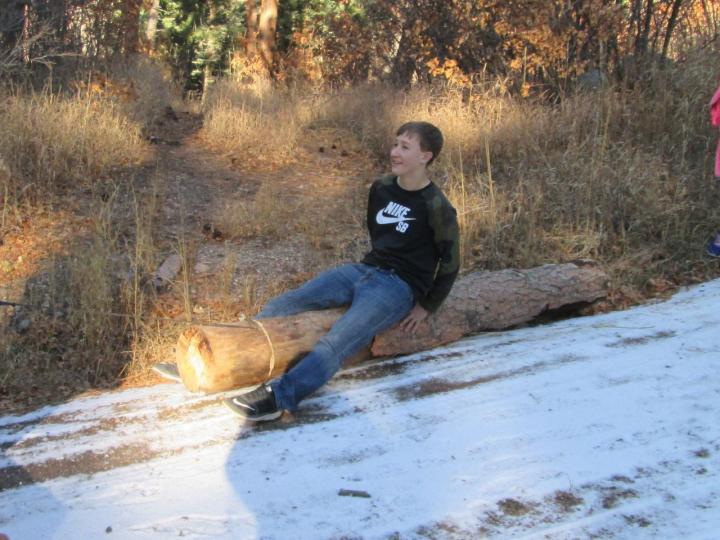 Unfortunately, all the enthusiasm in the world can’t guarantee success. We were far from the Yule Log when we heard the distant cry of “Haleub!” (Beulah said backwards), to announce the discovery. We made our way across the ravine and the lucky finder mounted the log (along with all of his friends) and the rest of us got to man the ropes. Since our goats were finally big enough to do their fair share of hauling this year, I had put on their harness breastcollars beforehand so we’d be prepared. I modified a couple of things so they could pull without the traces. Then Phil and I tied them into the pulling ropes and let them do their thing. And boy did they do it! Finn and especially Sputnik leaned their bodies into those harnesses and hauled away for the whole long trip back to the lodge. They do love to pull! 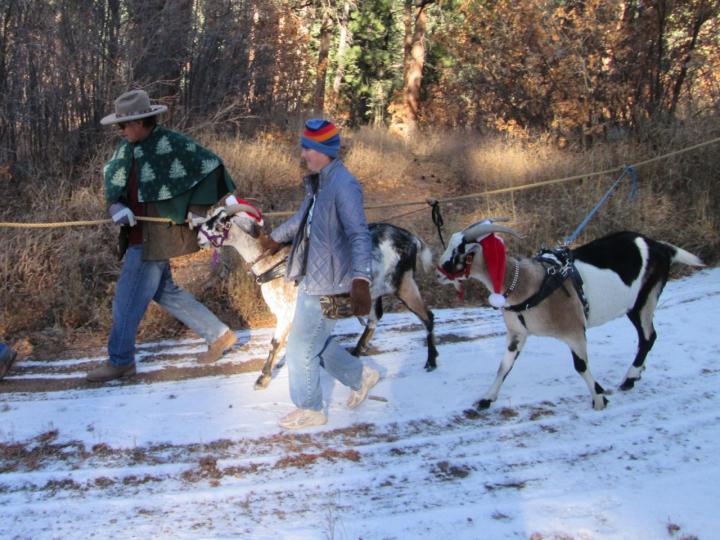 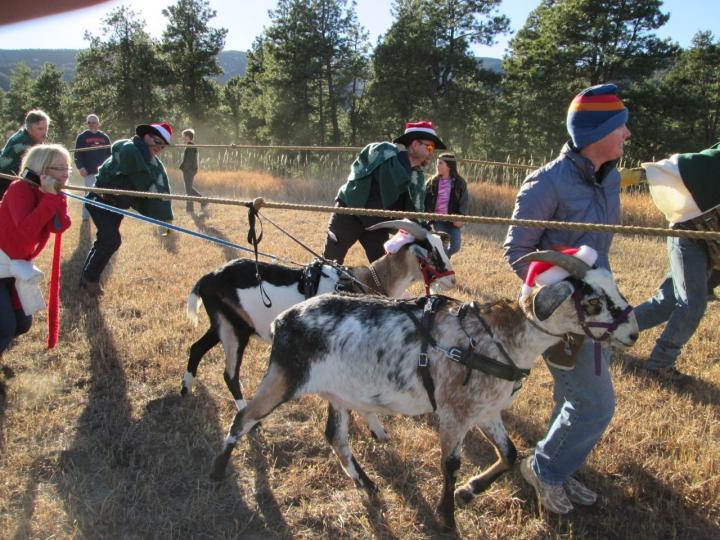