We’re back from the Weld County Goat Extravaganza, and as usual it was a blast! We brought Finn and Sputnik for the harness class of course, but we also brought Rambo and Rocky to enter in the dairy buck show.

Finn and Sputnik were conked out the first morning. Finn was asleep with his head in the hay bag and Sputnik was using Finn for a pillow. 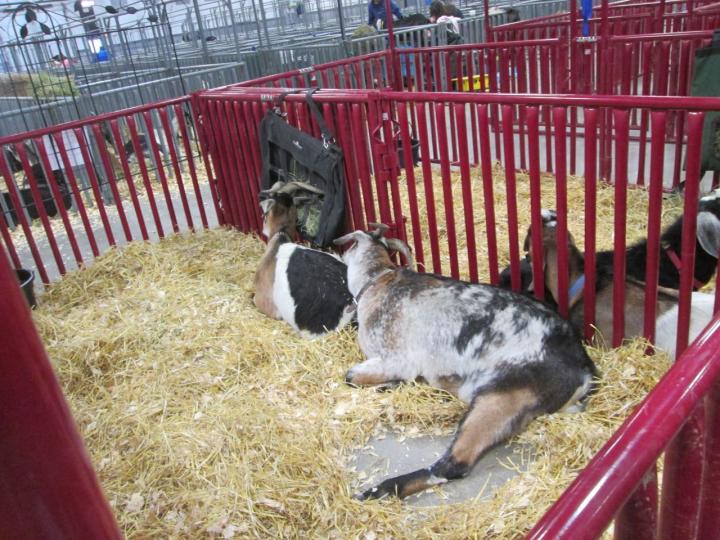 But the second they heard us coming, both boys leapt to their feet and were ready for action! The harness class was very low key this year. Not many people showed up, unlike last year where we had a couple dozen crowding round. No one brought their own goat, which was a bit disappointing for me, but that’s how it is. We started out with Finn and Sputnik hitched to their wagon, but Finn was too wild to pull well with Sputnik, so I hitched him up single and let him do all the work by himself. Normally the ring is covered with a kind of astroturf carpet, but this year they decided to use deep shavings instead so as to cut down on messes and smells. It worked well for showing, but it wasn’t at all a nice surface for driving. But slogging through the deep footing took the edge off Finn whose only thought was of running off. A couple of circuits convinced him to abandon his racing ambitions. Once Finn settled down I was able to take him outside the ring and let some of the class attendees drive him.

That evening Phil and I participated in our first buck show! 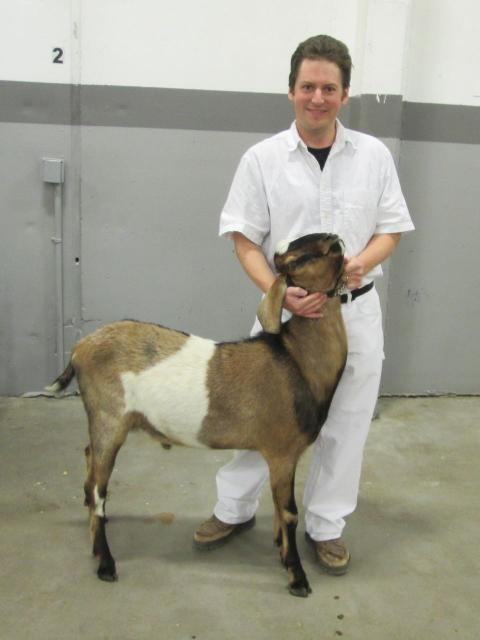 Also that evening, Finn decided he’d had enough of confinement and started leaping effortlessly out of the pen. Luckily I anticipated this possibility and had brought our wire panels along just in case. By the time we were done, it looked more like a tiger cage than a goat pen! 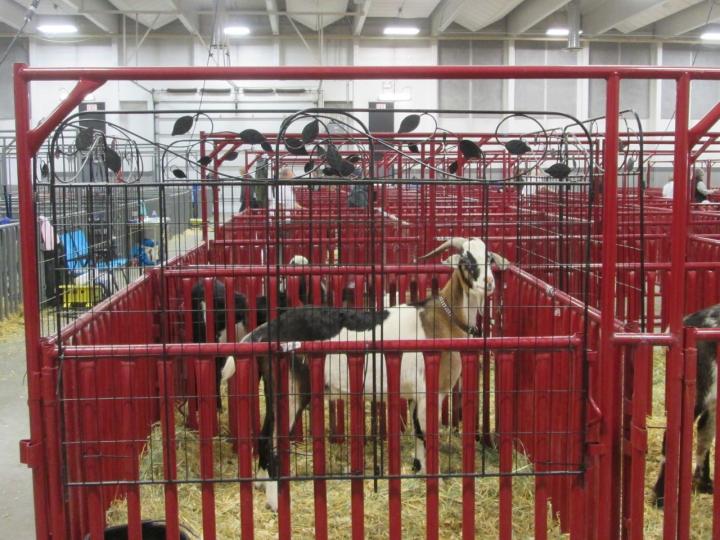 We didn’t have enough panels to enclose Finn and Sputnik together in a larger area, so Sputnik got moved to a private suite. He had no ambitions of leaping the pen, and he probably didn’t think he could clear it without a runway. Sputnik is capable of jumping just as high as Finn, but he has to back up a few yards, crouch, bob his head up and down, wind himself up, and then make a running leap to clear anything of substance. Finn, on the other hand, can sail gracefully over almost any obstacle without so much as coiling, which gives him the air of having wings on his feet. It also makes him hard to contain. 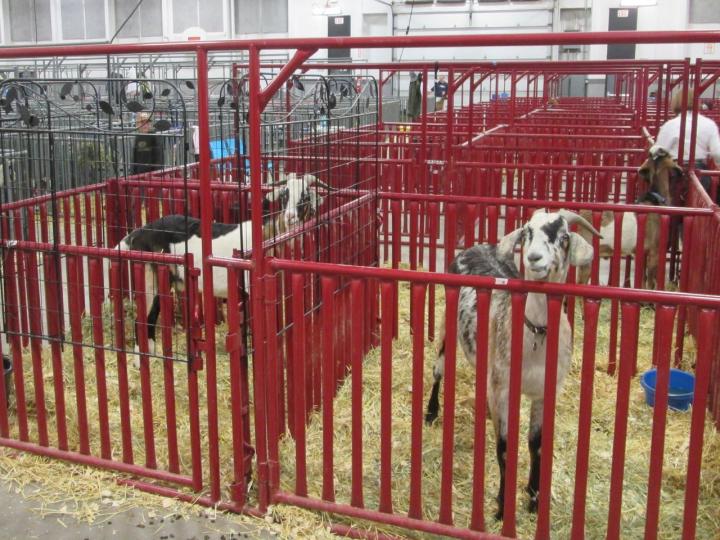 We had nothing on our schedule Sunday morning except packing up and going home, so we loitered around the show for a while and took some time to drive our team around a large parking lot outside. Saturday’s weather had kept us mostly indoors, but Sunday was clear and crisp and our goats were stir crazy from being confined for so long. They were in a running mood, and luckily for us there was lots of room to do it! Oddly, it was Sputnik who was leaping, bolting, bucking, rushing, and fighting the bit. We’re used to Finn playing up, but Sputnik is usually the Steady Eddy of our team. I guess he had a touch of cabin fever!

Nothing that can’t be cured by a brisk jog in the great outdoors! 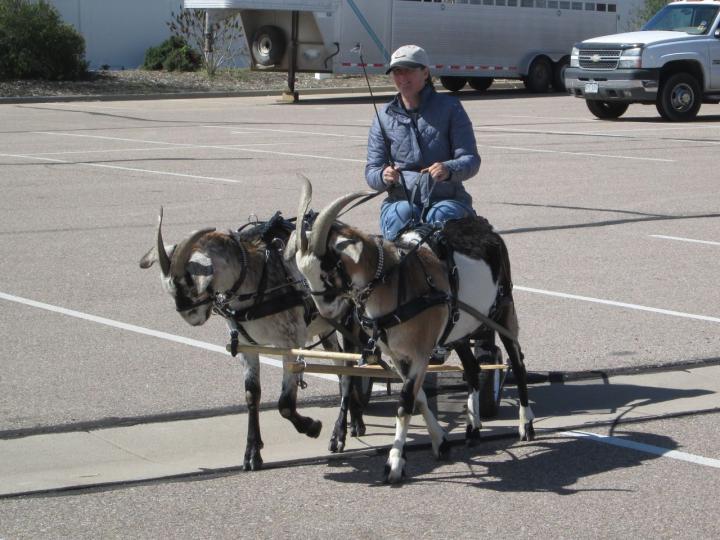 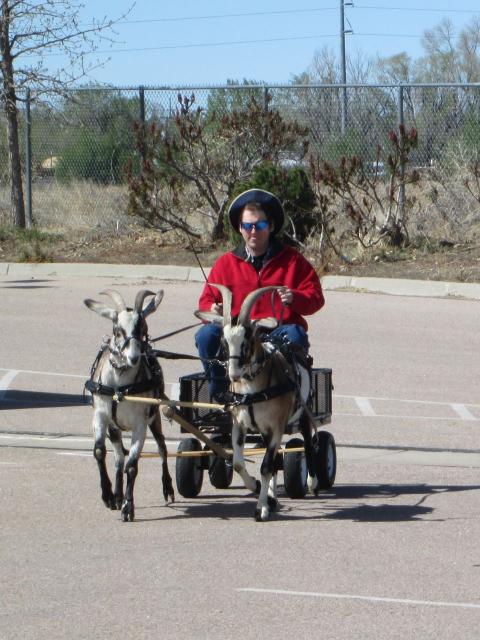 Oops… As much fun as it is to exceed the speed limit, it can be expensive! 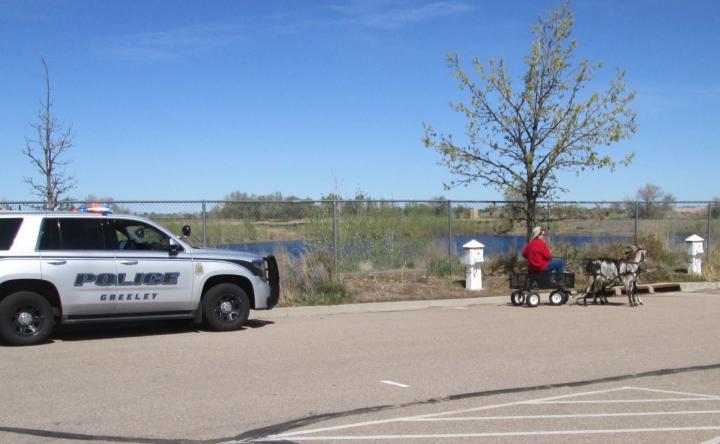 Was that joyride worth the ticket price, chief? 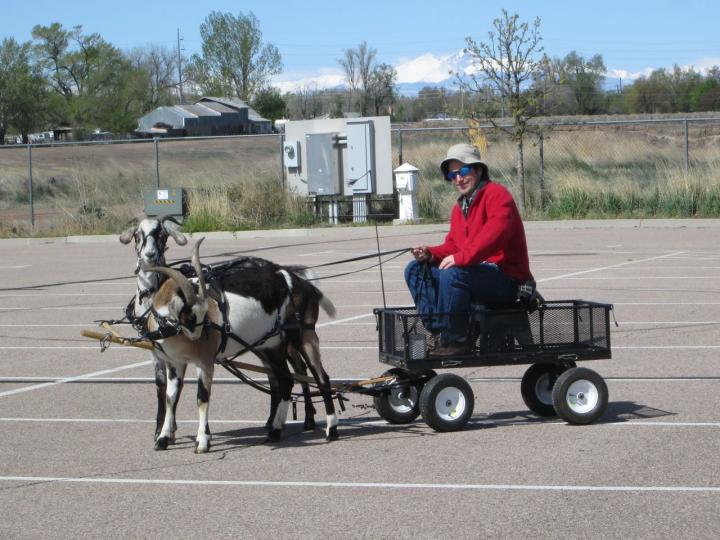 I took the reins and slowed things down after Phil’s brush with the law, and I had the boys practice crossing this big puddle instead. 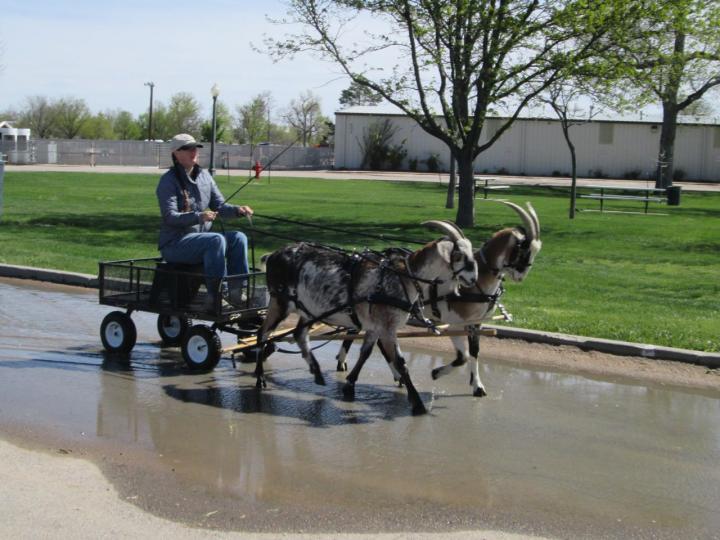 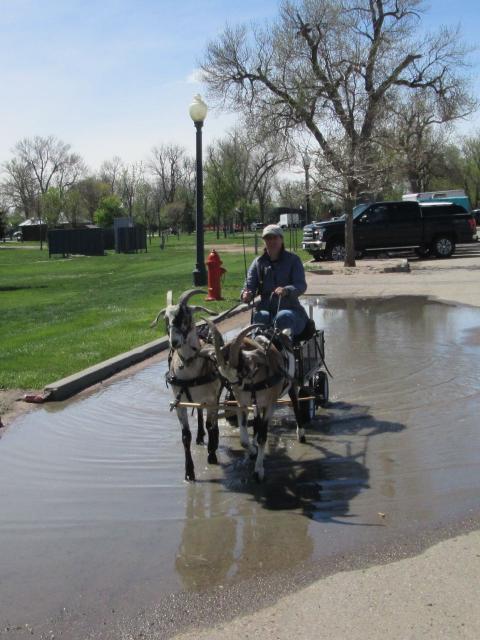 Then it was time to pack up and head home! It was a full, fun weekend and I’m proud of our wonderful goats!