I really need to post the rest of those photos I took on me and Phil’s anniversary before they get too moldy and outdated!

Rocky and Rambo are almost too big to pick up now! Rocky has this adorable but hilarious bunch of flappy loose skin under his chin so I often tease him that he looks like Jabba the Hutt. “More chins than a Chinese phone book,” as my brother Tim would say! He also lets us know (most emphatically) when dinner time is approaching. 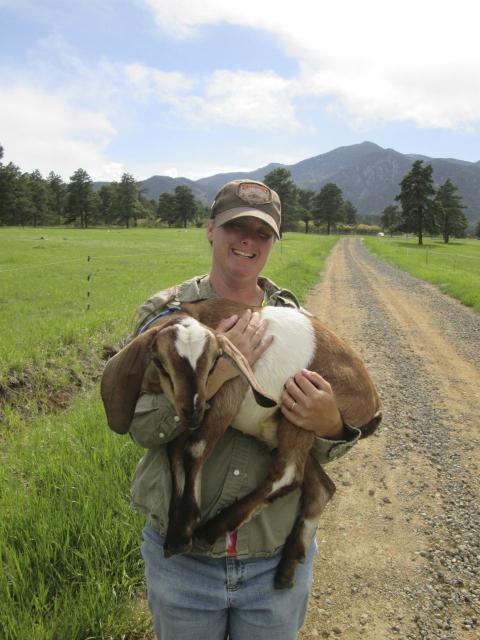 Rambo is long, sleek, and regal, and he has a sweet, laid-back personality. 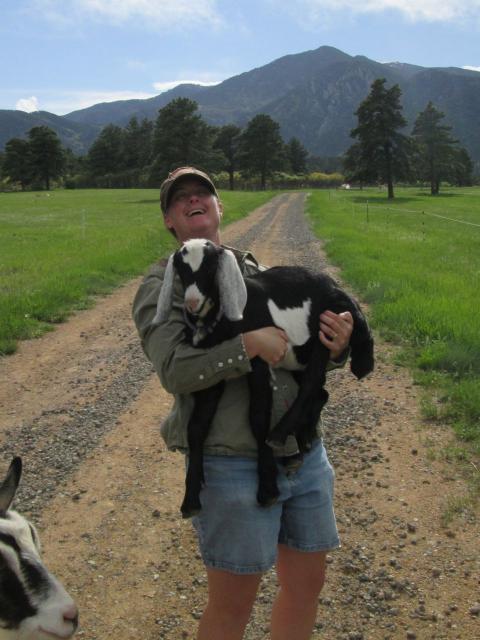 Nubbin loves “her” boys. She’s adopted them wonderfully, and although she will only nurse them on the stanchion, she runs to it willingly morning and night and doesn’t even wait for me to lock the headpiece or put feed in the pail before she lets them get started. She also sleeps with them at night, shares her food, and keeps an eye on them throughout the day so they don’t get separated from the herd. I’m very proud of her for taking them under her wing (and for keeping me from having to prepare bottles twice a day for 3-4 months!). 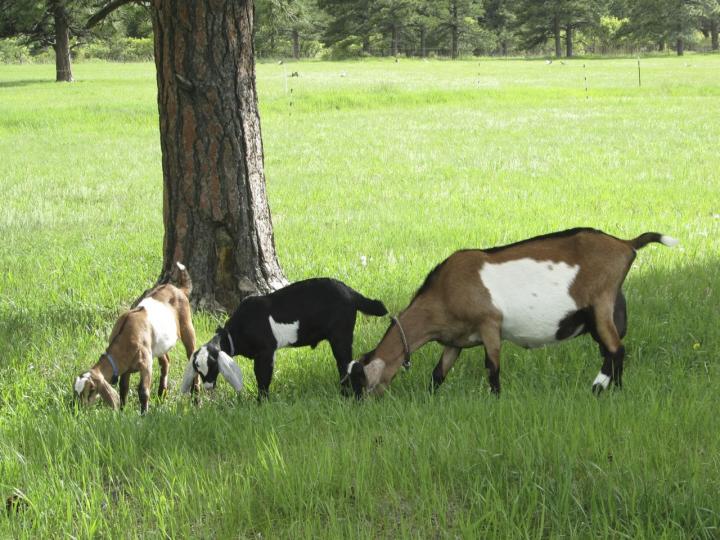 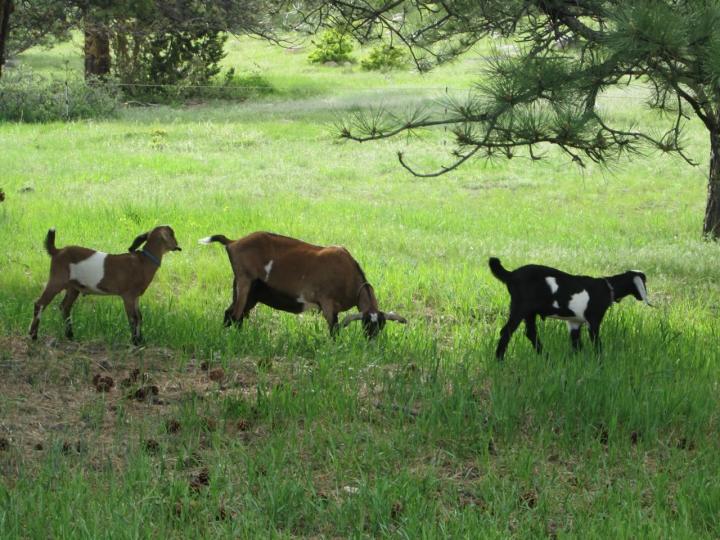 Pedro and Pepita are already much bigger than these photos I took two weeks ago, and boy are they a couple of little trouble-makers! They both adore people (especially Pedro) and are constantly into everything. Pepi’s ears stick almost straight out! 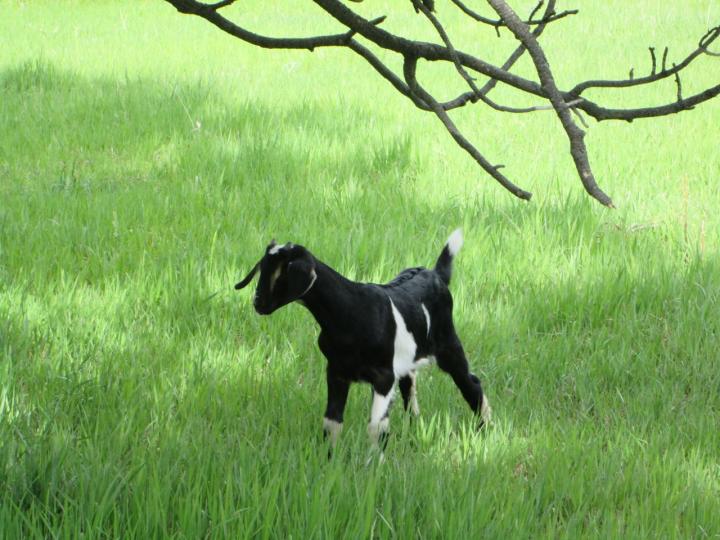 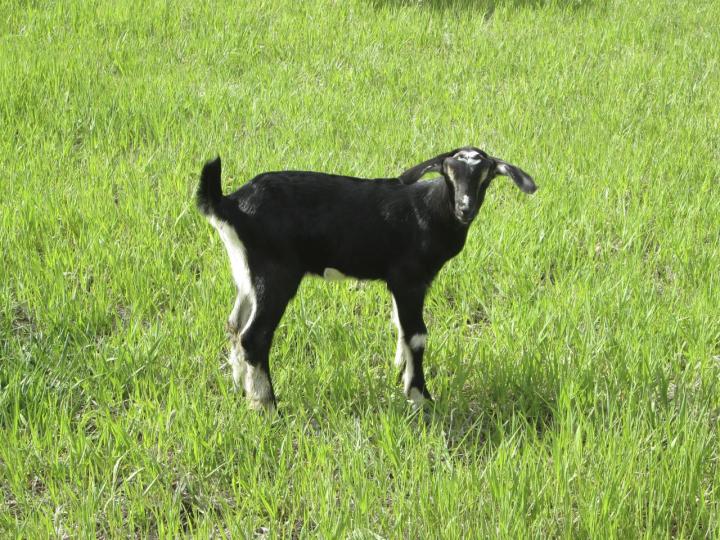 “Look! Phil has an untied shoe! Quick, everyone attack at once!” 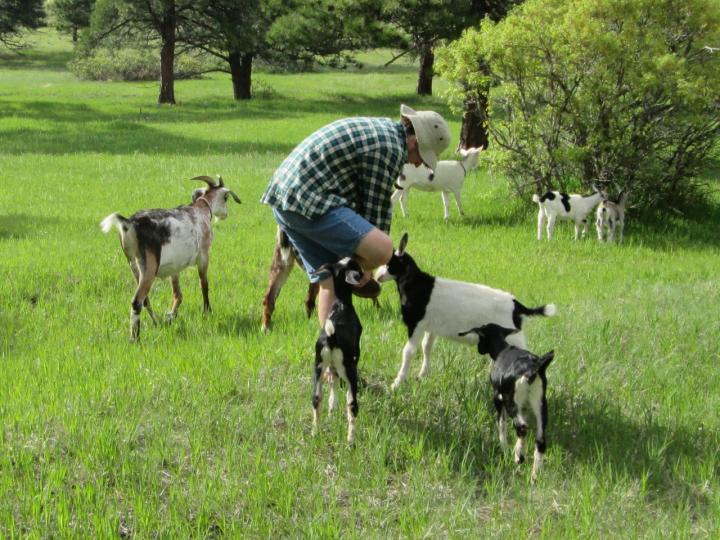 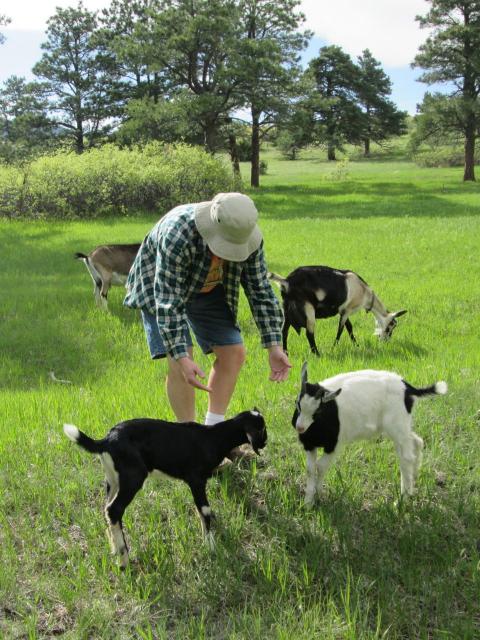 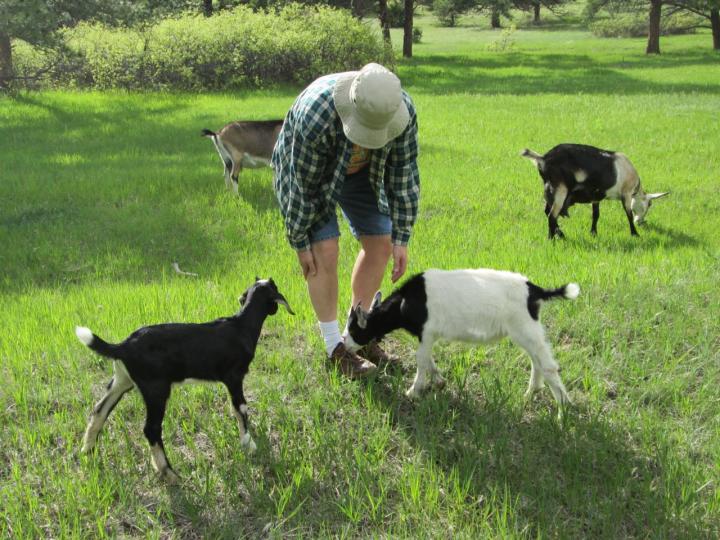 You can’t tell in pictures yet, but the upper part of Crockett’s neck now has dark skin underneath. It will turn light gray or tan by winter I’m sure. If he gets dark enough he’s going to be a stunning tri-color pattern when he’s finished! Lots and lots of chrome on this one! 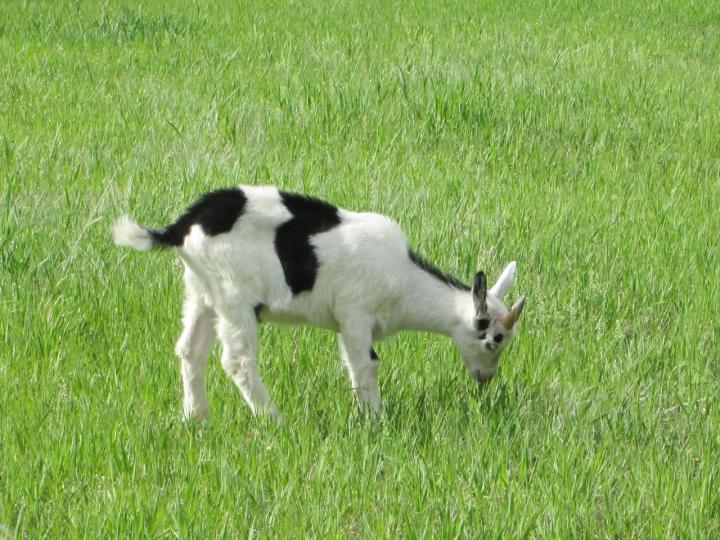 An added bonus is that he has one black horn and one white. I love this feature, and it makes me so glad we didn’t disbud him! 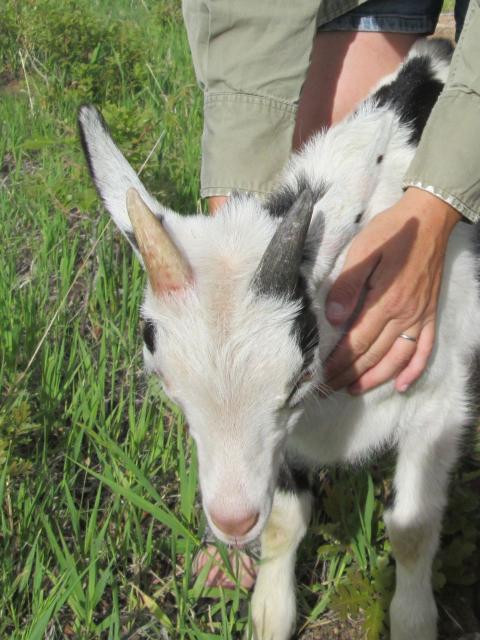 It’s my friend Boone! I absolutely love the single lightening strike down one side of his face. It gives him a very unique appearance. 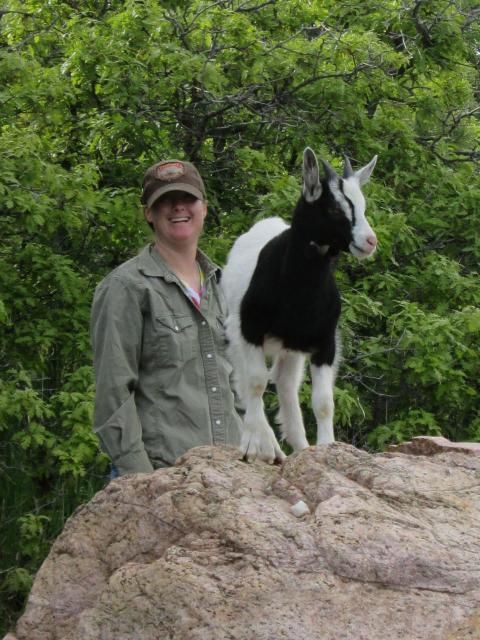 “You want a kiss Boone?” 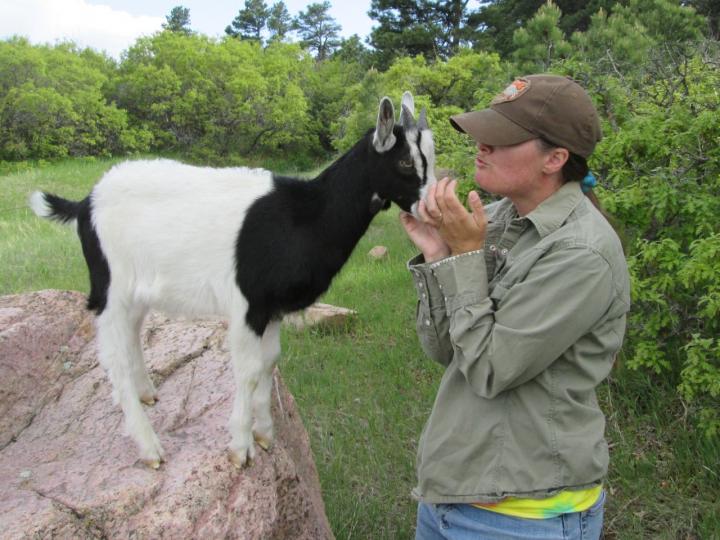 Finn and his half-sister Petunia share a shrub. They’re very different in many ways, and yet both share some striking traits from their mother Lilly. Both Finn and Petunia are leaders in the herd, but unlike the tyrant Lilly, they are both benevolent rulers. I miss Lilly but I’m glad that she passed her better traits on to her offspring who have also passed them on to other members of our herd. 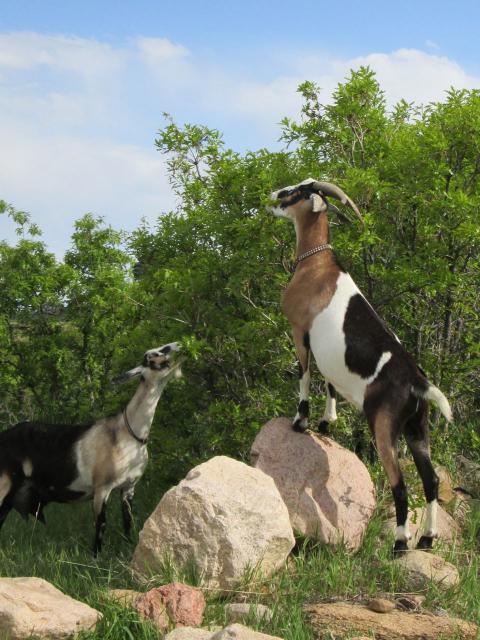 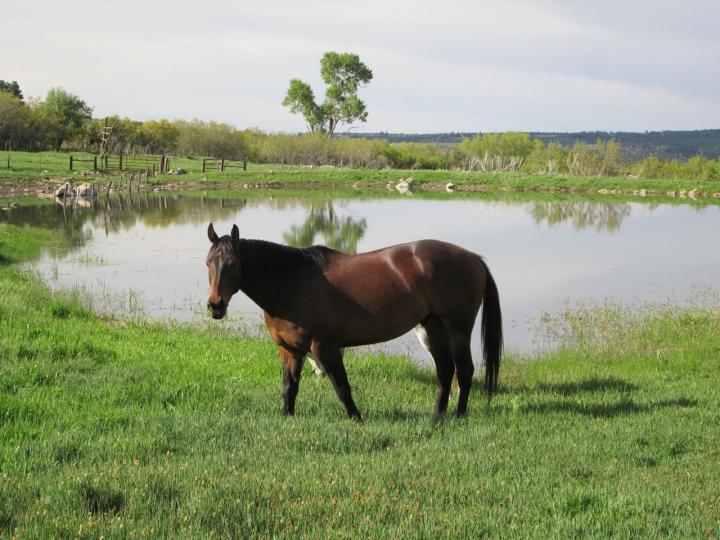 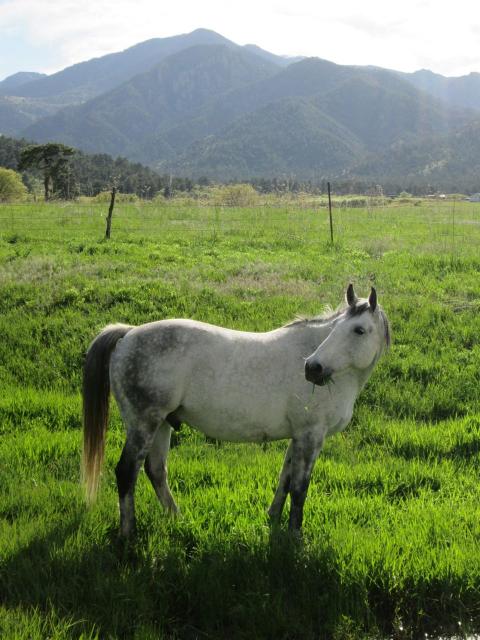 After the walk there was a fight at the waterhole! 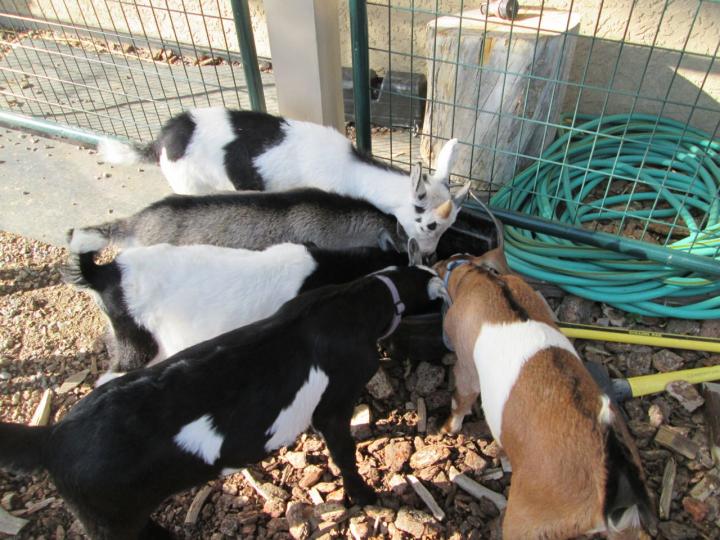 2 thoughts on “Of shoes and ships and ceiling wax, of cabbages and kings”