We broke camp after the sun was well up and the early morning frost had melted. Gayle and Alexa went to saddle the llamas so I figured I should start getting my goats ready. One person saddling three goats should take about the same amount of time as two people saddling two llamas, right? 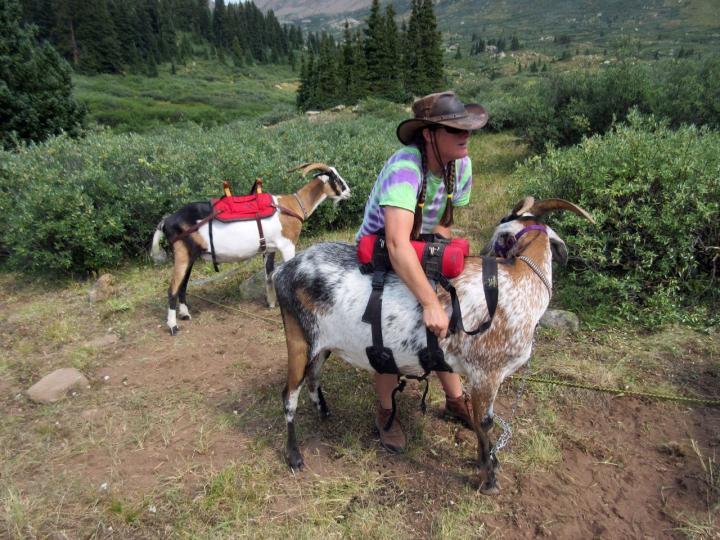 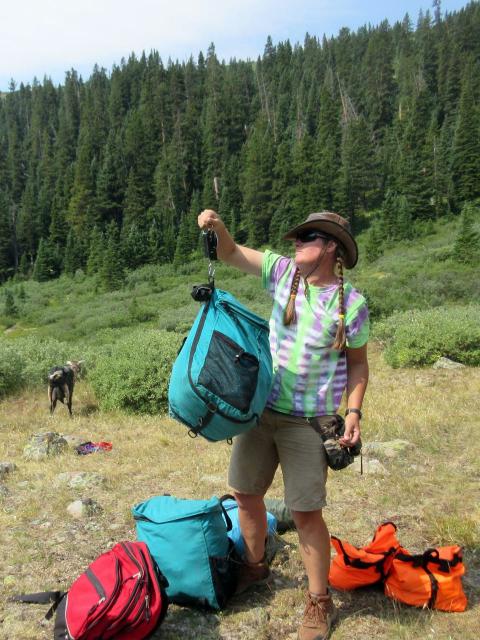 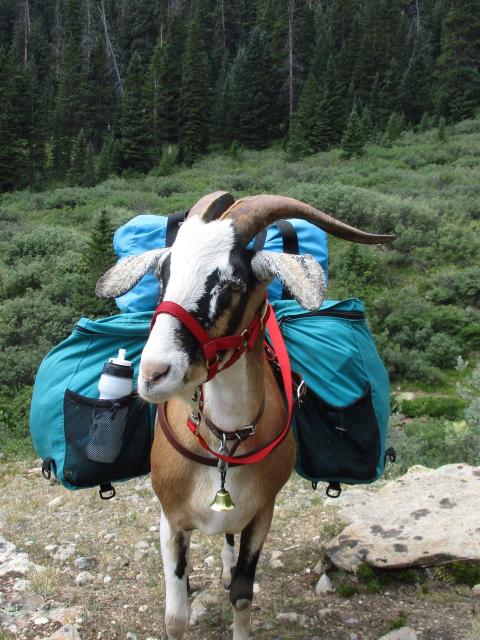 A few minutes later my crew was ready to rumble. 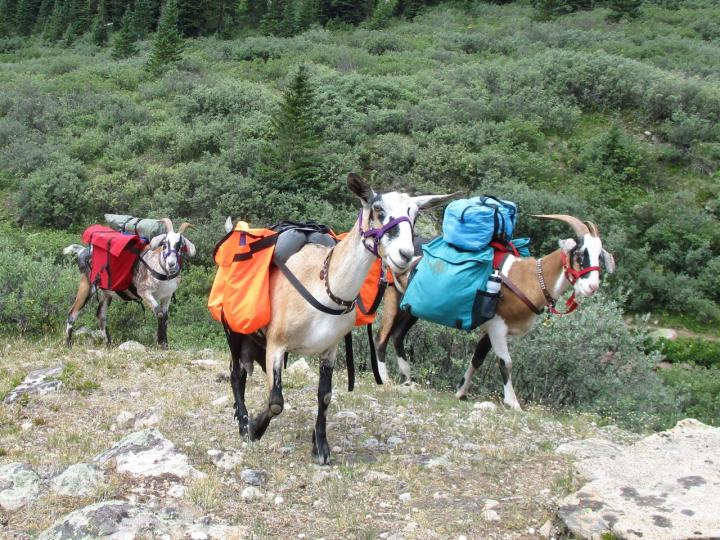 But “Hurry up and wait” became the name of the game as I discovered that the llamas took much longer to pack than I anticipated. Luckily my guys are patient and know how to avoid tiring themselves before the hike even begins. 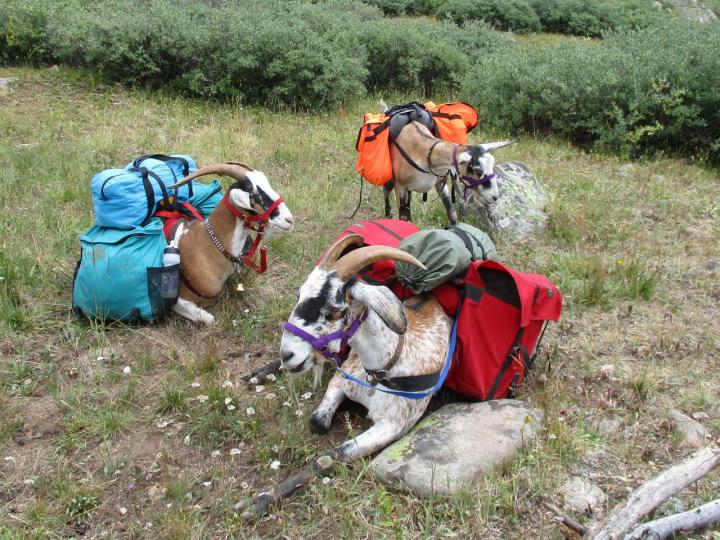 We got going and our view widened as we climbed out of the valley floor. 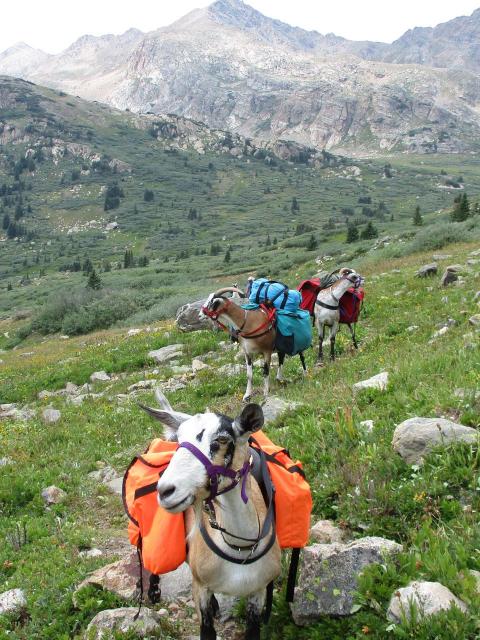 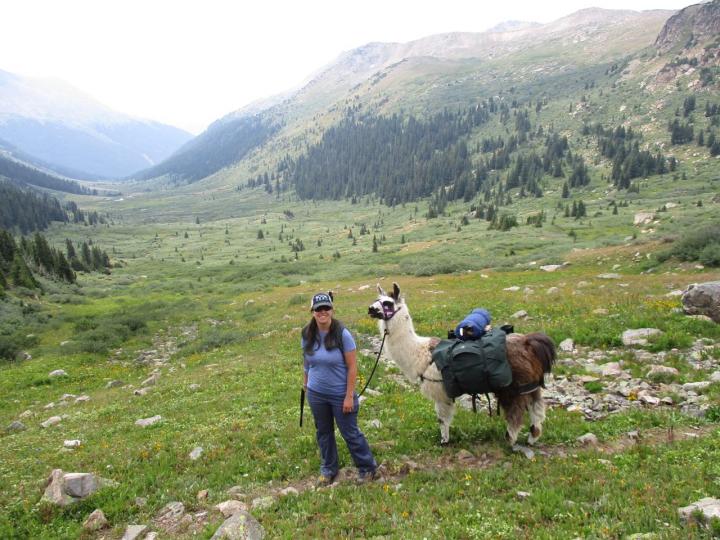 This boulder was child’s play for my nimble goats who skipped right up it like it wasn’t there, but it presented something of a problem for the llamas, who had to find a way around. 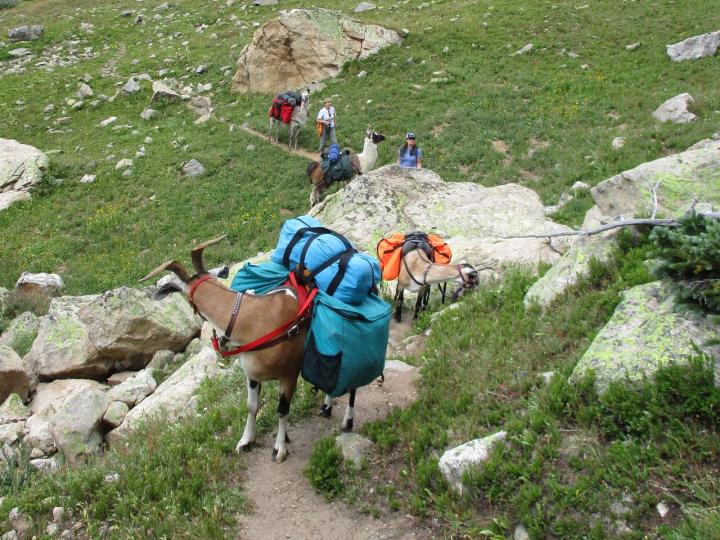 We crested a shoulder of the mountain and saw the valley spread out behind us while another valley widened out in front. 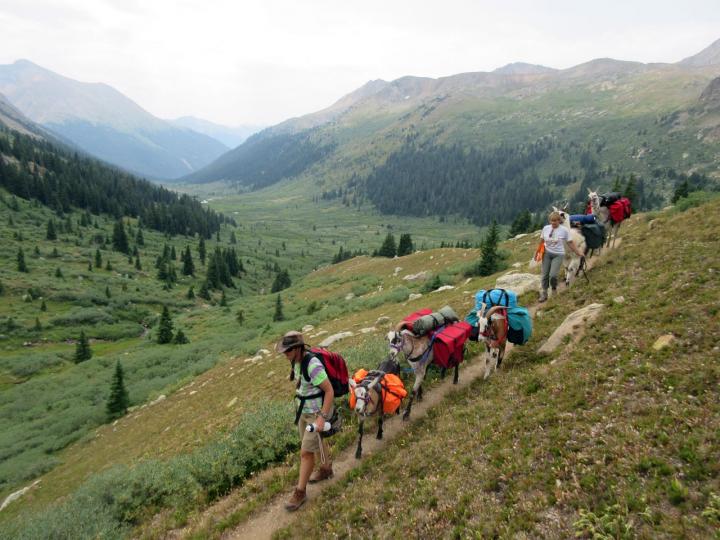 We stopped in this second valley to eat some lunch and take a break after our morning climb and before the biggest climb. Gayle discovered that Spot likes apples, which apparently is somewhat unusual for llamas. 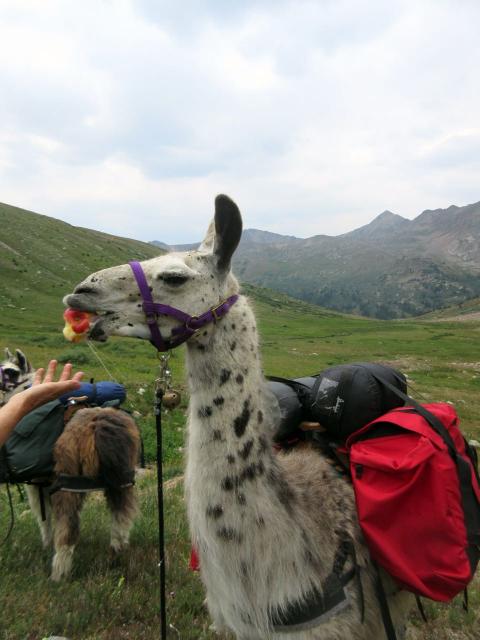 The big climb was not terribly long but it was very steep. I loved the views of the grassy green valley floor below us. 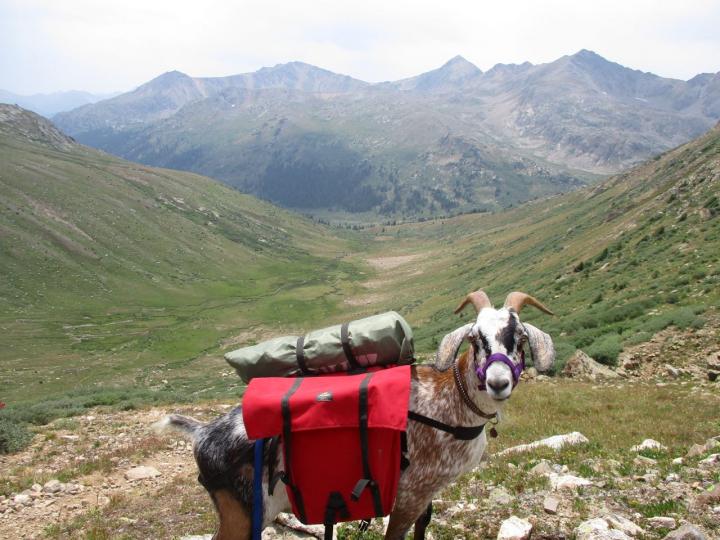 As Finn and Sputnik approach the top, you can see Gayle and her llamas not far behind us but very far below. This was just the top part of the climb. Most of it is out of the frame. 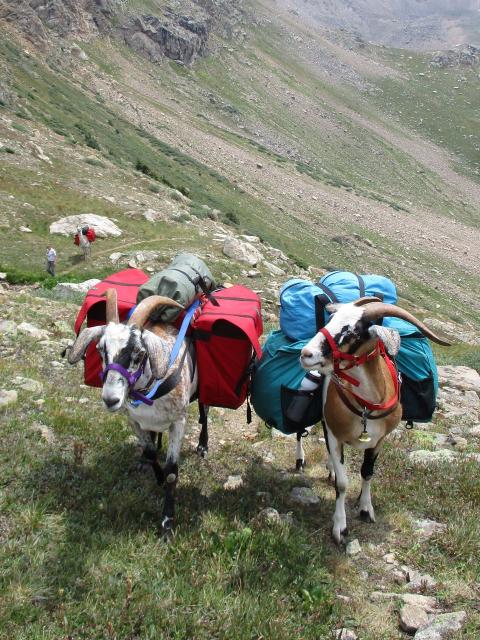 As we crested the ridge we discovered a small lake in the saddle. 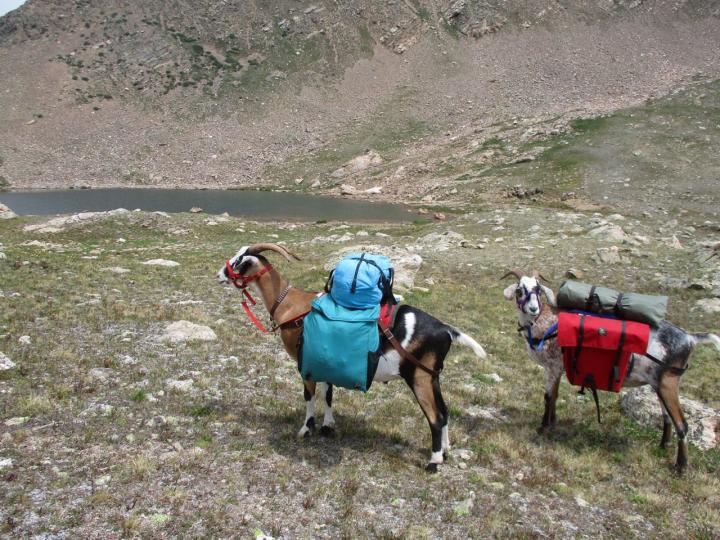 When we crossed the saddle we could see another valley spread out below us with Frying Pan Lakes in the distance. It looked like it would be an easy downhill trek to the ponds where we planned to make camp. 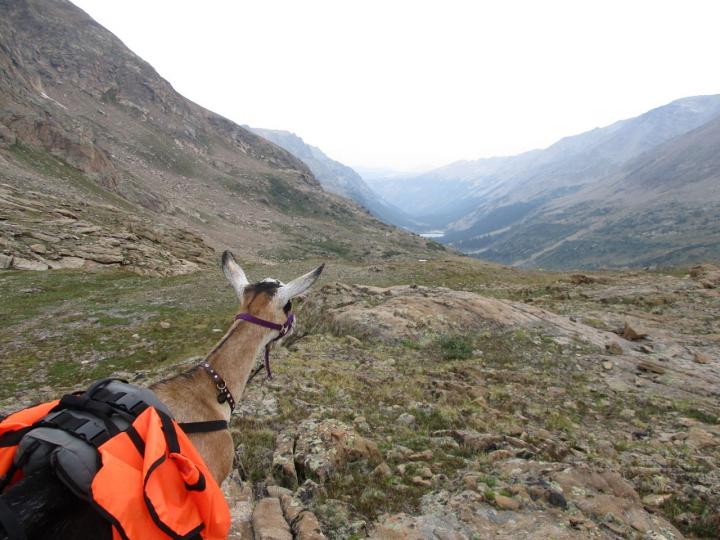 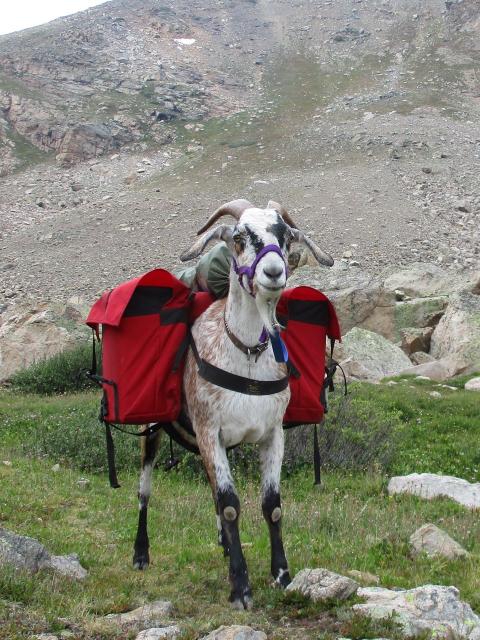 Our path became more difficult as we descended the far side of the saddle. Trails fanned out in several different directions and cairns were sometimes misleading. My goats and I got up on the scree so we could look at the lay of the land from above. 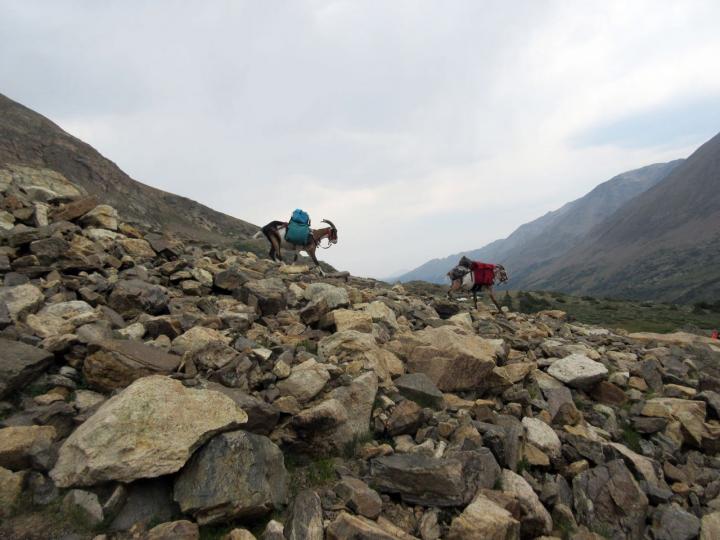 Once past the scree slope, it looked like an easy and pleasant walk through the green and gently sloping valley below, which was a relief because bad weather was moving in and rain was starting to sprinkle down. 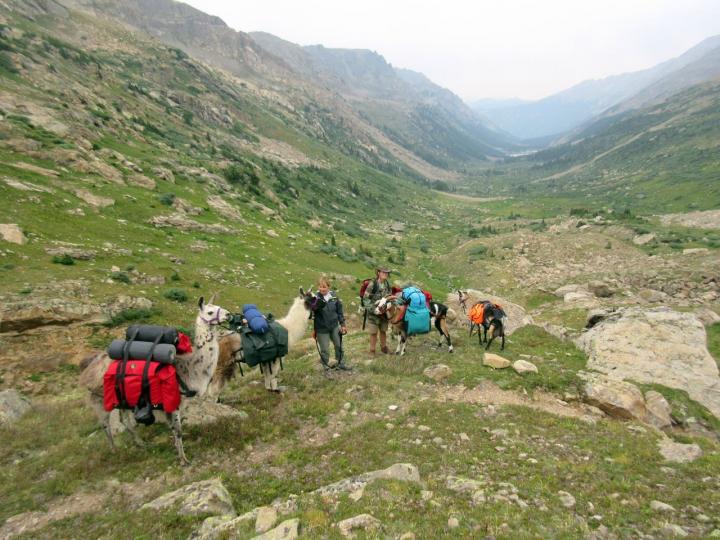 But as we got going, we realized that this was a trackless valley filled with marshes, jumbled rock, and thick brush. We weaved back and forth, searching in vain for an established trail, but we never found one. It was beautiful and looked how I imagined the wilderness to look between Bree and Rivendell when I read The Lord of the Rings. But as the day wore on, the lovely walk became more and more of a slog and then a death march as we trudged doggedly on toward the lakes, wet and tired. I wanted to press ahead. My goats spent more time waiting for the llamas than actually walking and it was wearing them out. Spot was dragging on her lead the whole time which was tiring Gayle out and slowing everyone down. I tried not to think about having to hike back UP this valley tomorrow. We ended up stopping before we reached the lakes. We were tantalizingly close and Alexa and I were game to keep going, but Gayle was worn out from dragging Spot and we weren’t exactly sure just how much further the lakes were since we couldn’t see them past the trees. It turned out later that we were almost on top of them, but we stopped in a boulder-strewn dell among the evergreens and made camp just as more rain set in. 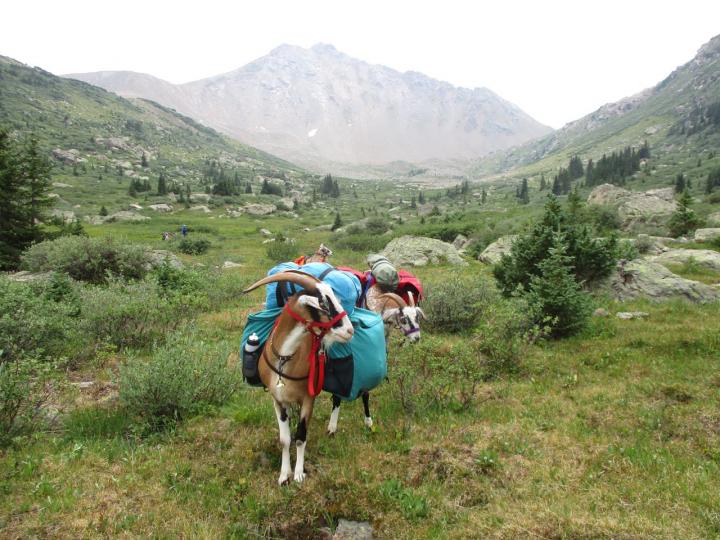 I was on cooking duty that night and I made shrimp linguine alfredo. It was a surprisingly easy camp dish, especially since I had milk on the hoof, and it came out delicious. I love it when a simple meal looks super fancy so I can take credit for being a five-star chef with the ease of preparing a box of mac ‘n’ cheese. 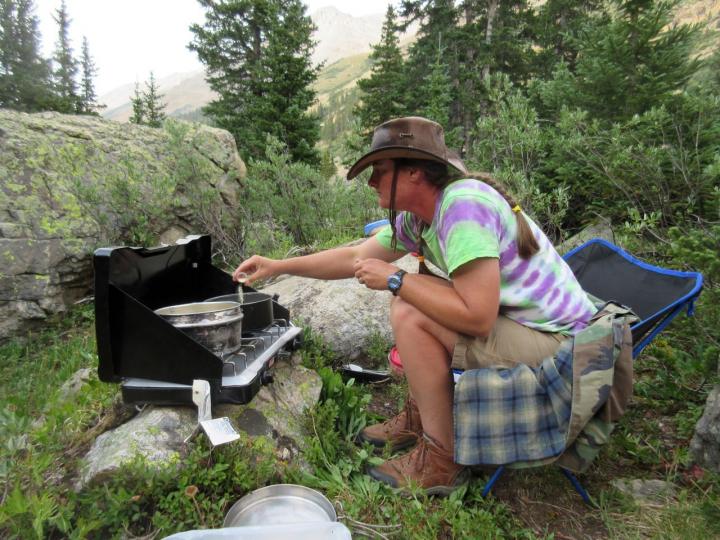 It was nice to have a piping hot meal after such a cold, tiring day. 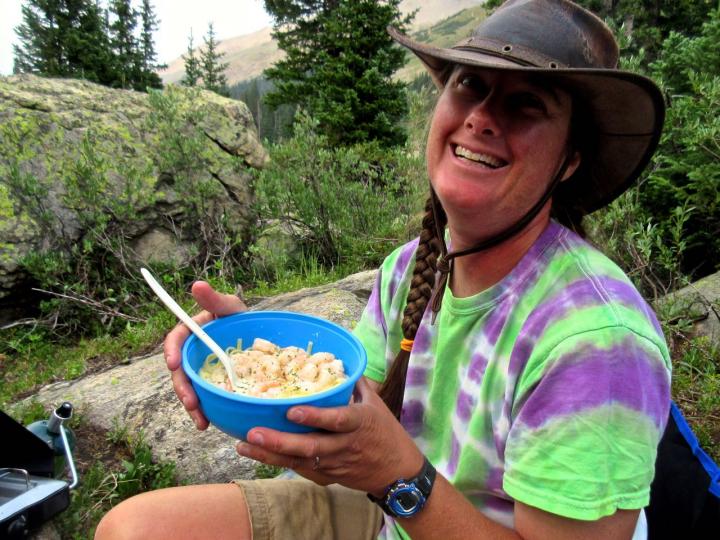