Actually, it was less dark since Jezebel went into labor a couple of hours earlier than Delilah did the night before. But it was definitely stormier! It turns out we got somewhere in the ballpark of 3-4 inches of rain in about 12 hours, so we were fortunate no one floated away.

Jezebel, as is usual with her, decided to take her pretty time with the first kid. We waited around while she pushed, but progress was slow since she kept getting up to look out the door. And every time she looked out the door she would see our dog, Daisy, who loves babies and was curiously watching from outside the fence. Jezebel didn’t want the dog watching her and would snort and stop pushing and the coming baby would slide back out of view. I had a Saddle Club meeting I really wanted to be at, so eventually I decided to move things along by holding Jezebel away from the door. Phil went to the back and found a hoof coming. He gave it a small tug, but it really didn’t want to come out yet. We waited a little longer but Jezebel wasn’t making much progress when she pushed and Phil didn’t want to interfere much so we traded places so I could have a look.

It turns out there’s a reason things weren’t progressing! First of all, there was only one foot presented. One leg back is considered a fairly normal presentation, but Jezebel is a small doe who was stunted because of poor nutrition when she was young. She does better with small kids properly presented on their due date. These kids were four days overdue. When I reached in I found an enormous, bulging forehead stuck fast in her narrow pelvis. I could tell from the large horn buds just below the surface that this was a buck. With a kid this big, I thought she might have an easier time if I could find the other leg and bring it to the surface, but I was unable to figure out which leg to look for. I could not for the life of me figure out if I was feeling the right or left leg, and when I reached around on either side of the baby to see if I could feel the other leg, I couldn’t find anything but ribs. It felt like I was delivering a three-legged kid! So I went with it and started to pull. Once I began pulling, Jezebel started pushing and we soon had baby out. The other leg was there. It had just been hiding so close to his body that I couldn’t tell it apart from the rest of him until he was out of the sac.

And here’s the first boy, brand new and shaking out the birthing fluids he’d inhaled. 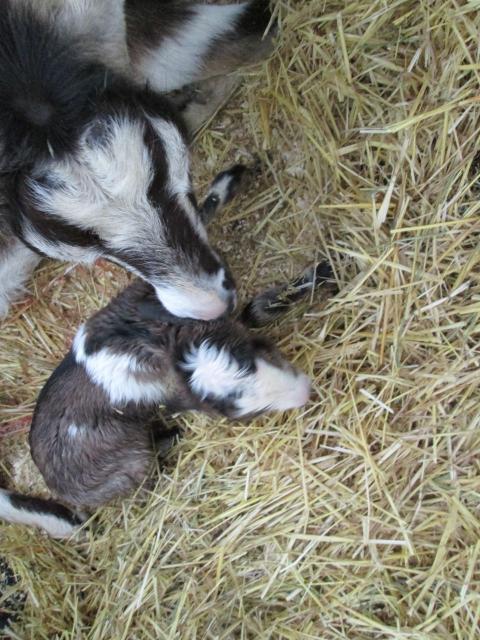 His mom and I soon had him dried off. 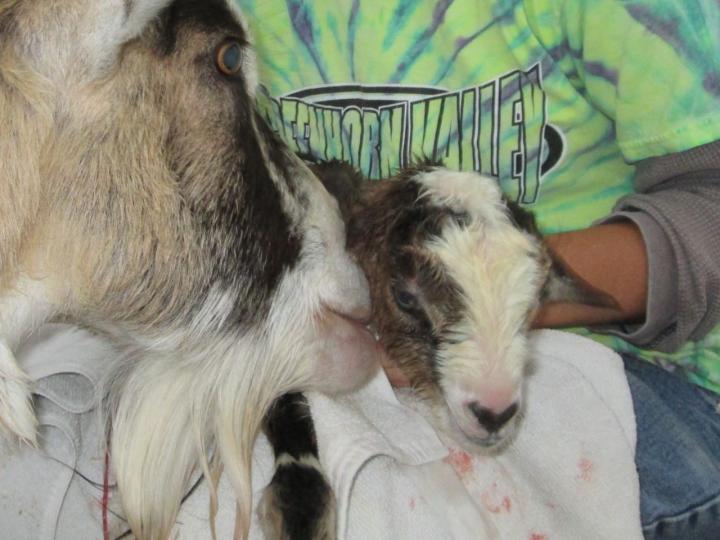 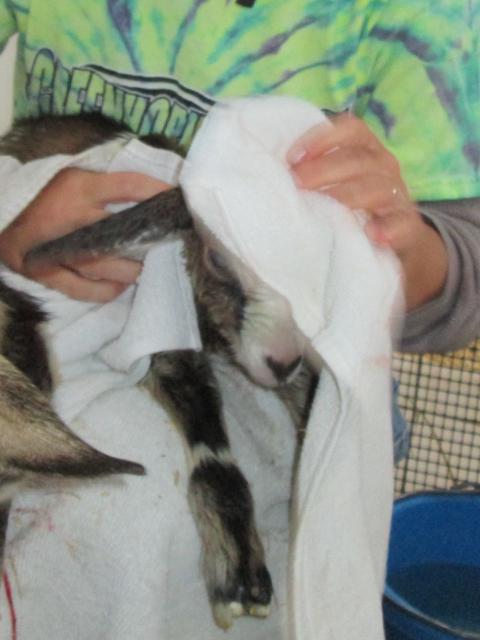 I could tell there was another kid there. Jezebel has given us singletons two years in a row, but I could feel another hard bump inside her belly this time! At first, we thought the second kid would be easy. Jezebel barely started pushing and a big, dark mass came shooting out all at once. Alas, it was just a head. There were no legs presented at all and I knew she would need help with this one. Phil got Jezebel to her feet so I could try pushing baby back in, but she was already too far out and her neck was only telescoping. I had to reach in past her head to find a foot, and Jezebel was fighting me all the way. She was also trying hard to lay down again and Phil had his work cut out to brace her up. The front feet were all mixed up with the back feet, so it took me a little while to sort it out and make sure I wasn’t about to pull the wrong hoof. I had to close my eyes several times and try to envision what I was feeling. Elbow or hock? Knee or fetlock? I could feel the kid squirming, which was very reassuring and helped quell the rising panic. Once I was sure I had a front foot, I brought it forward and the rest was easy. The kid was tired but well. And our big buck had a precious little sister! 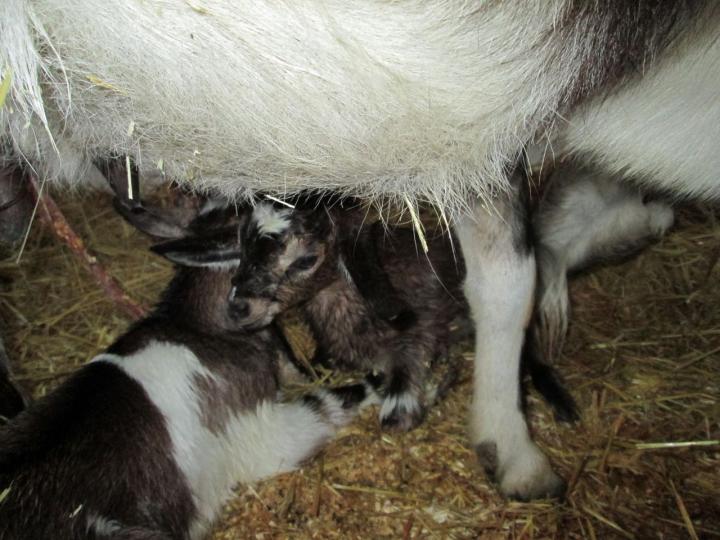 Poor Jezebel was exhausted. She had pushed very hard on that second kid and was spent. She licked baby a few times but then fell asleep. I let her be for a few minutes, but she really had me concerned. I woke her up after a while just to make sure she was ok. The catnap was all she needed. After that she was able to get up and help clean the second kid. She sure is adorable! 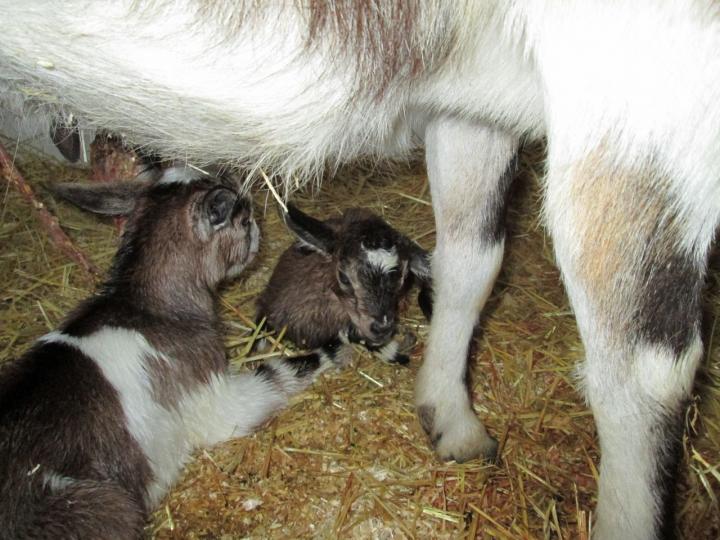 After the kidding, my work started! Our shed, which was so dry and well-bedded when we began, was now flooding with rainwater that had formed a river outside and was running under the bedding. These kids would never get dry in this weather! I removed all the old bedding and used it to make a dam around the shed. The river slowed to a trickle. I had to race (best I could pushing a wheelbarrow through ankle-deep mud) from the barn where the bedding was stored to keep the dry shavings and straw from getting soaked on the way. I was finally able to say goodnight at 9:30 p.m. The goats were dry and warm and I was soaked to the skin and frozen. Time for a hot shower and some dinner!

Today is lovely and I plan to take lots of baby goat pictures while the sun is shining!

2 thoughts on “It was a darker and stormier night…”